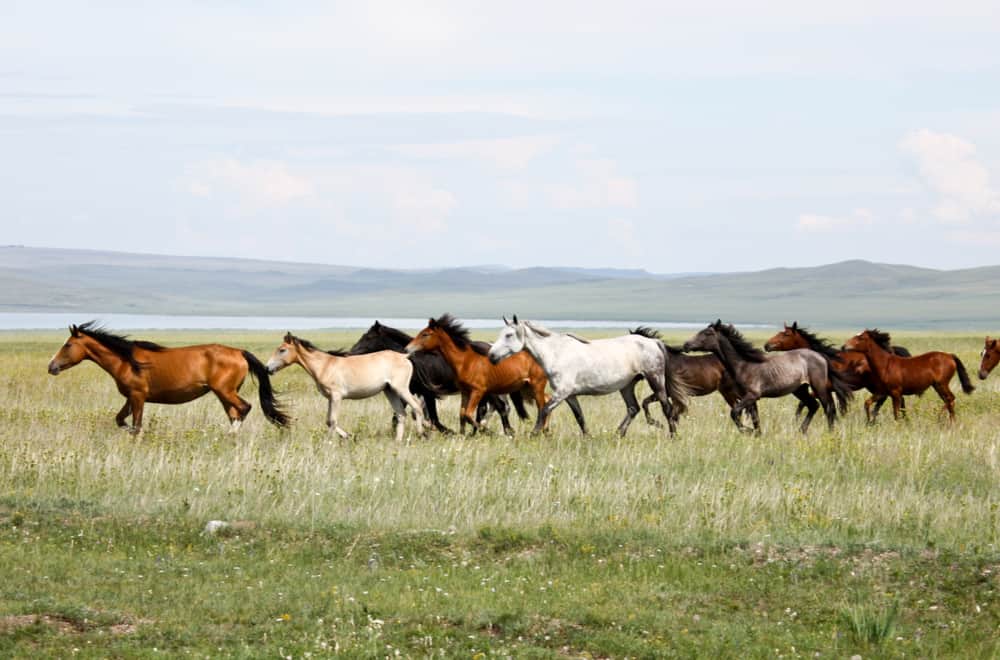 We’re used to thinking of horses as domesticated animals, carefully tended by their owners. But that’s not always the case. A surprising number of breeds live successfully in the wild.

Here we take a look at 14 wild horse breeds from around the world. We’ll learn what they look like, where to find them, and how they came to be roaming free.

So if you’re ready, read on to find out more about some truly fascinating horses… 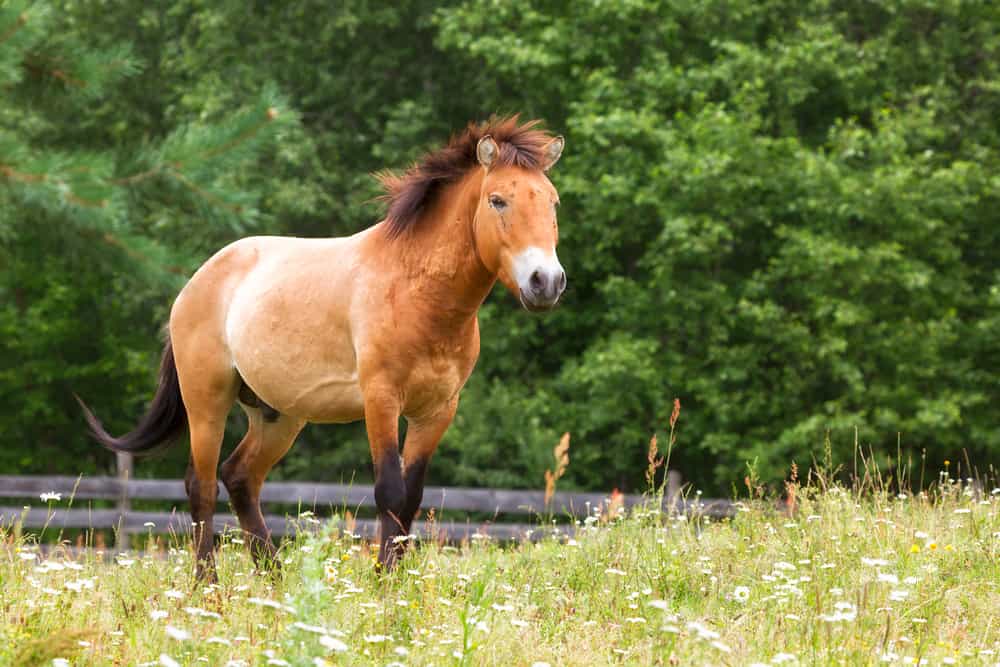 When we talk about wild horses, we usually mean feral horses. But Przewalski’s horse is different to all the other breeds on this list. That’s because it doesn’t just run wild now – as far as we can tell, it’s never been domesticated.

That makes it pretty special. It’s a link to the truly wild horses of the ancient world. And one look at it and you’ll see how unusual it is.

It’s short and stocky, with a large head, deep muzzle and broad neck. It has a dun coat with a thick dark stripe running down its back. And its short, coarse mane stands straight up, rather than lying flat against the neck.

But the differences between Przewalksi’s horse and other breeds go more than skin deep. They actually have more chromosomes than modern horses – 66 rather than 64.

If you want to take a look at a Przewalkski’s horse, you’ll need to travel to the Central Asian steppes. It’s a rare animal, but if you’re very lucky, you may still see it roaming wild in Mongolia’s national parks. 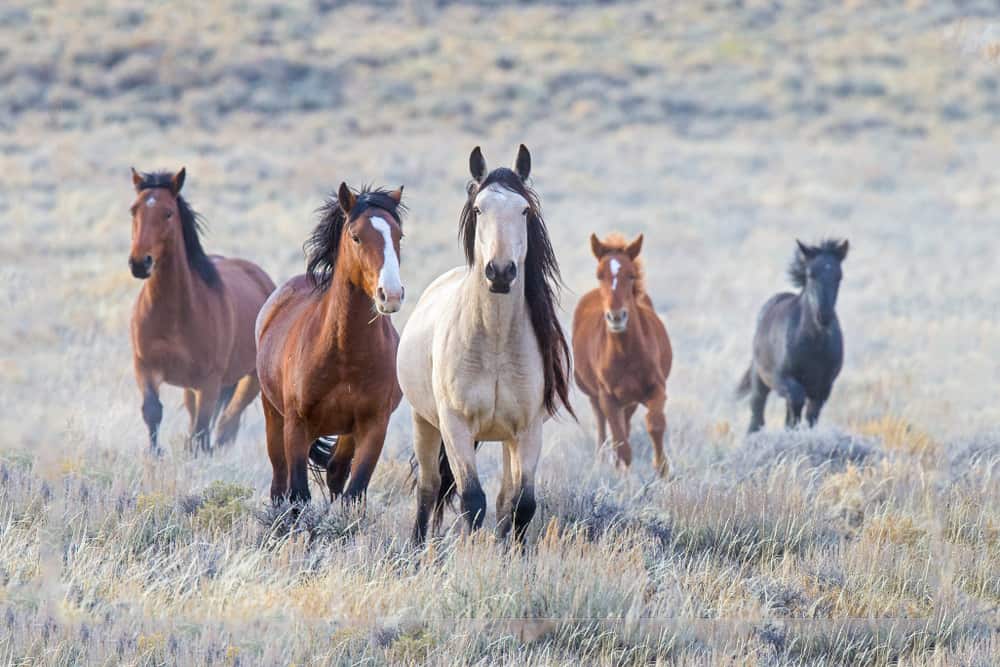 The iconic mustang can be found roaming free across the western United States. It’s descended from the domesticated horses brought to the country by the Spanish and Portuguese.

Their oldest ancestors are Spanish Colonial Horses. But over the centuries, the blood of lots of other breeds was added to the mix.

As a result, today’s mustangs vary widely. They can have coats of any color. And while some look like the early Spanish horses, others have the characteristics of Thoroughbreds or other racehorses.

Government policy is to try to keep mustang numbers in harmony with the environment. This is done by setting “Appropriate Management Levels”. In reality, though, numbers far exceed those levels. In 2017, the level was set at 26,000 horses, while there were over 72,000 mustangs.

From time to time, they are rounded up and captured by government agencies. If you meet certain criteria and pay a fee, you can adopt your very own mustang. 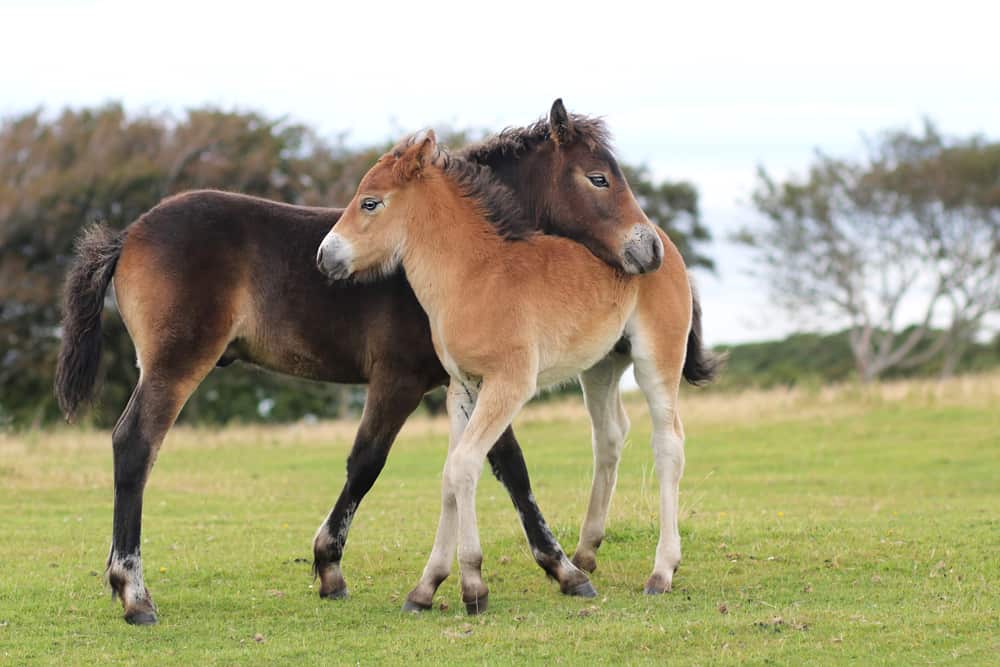 If you find yourself on Exmoor, in the southern English county of Devon, chances are you’ll soon spot a pony. The semi-feral Exmoor pony takes its name from this region, and around 600 of them still live on the moor.

The first written record of ponies living on Exmoor is the Domesday Book of 1086. The breed is descended from the native moorland ponies of the British Isles. They have bay coats and mealy markings known as pangaré around their muzzles, eyes and underbelly.

They’re short and stocky, standing between 11.1 and 12.3 hands. And one of their most unusual features is what’s known as a “toad eye”. This is a fold of skin above and below the eye. It helps the ponies’ eyes stay warm and dry in the wild moorland weather. 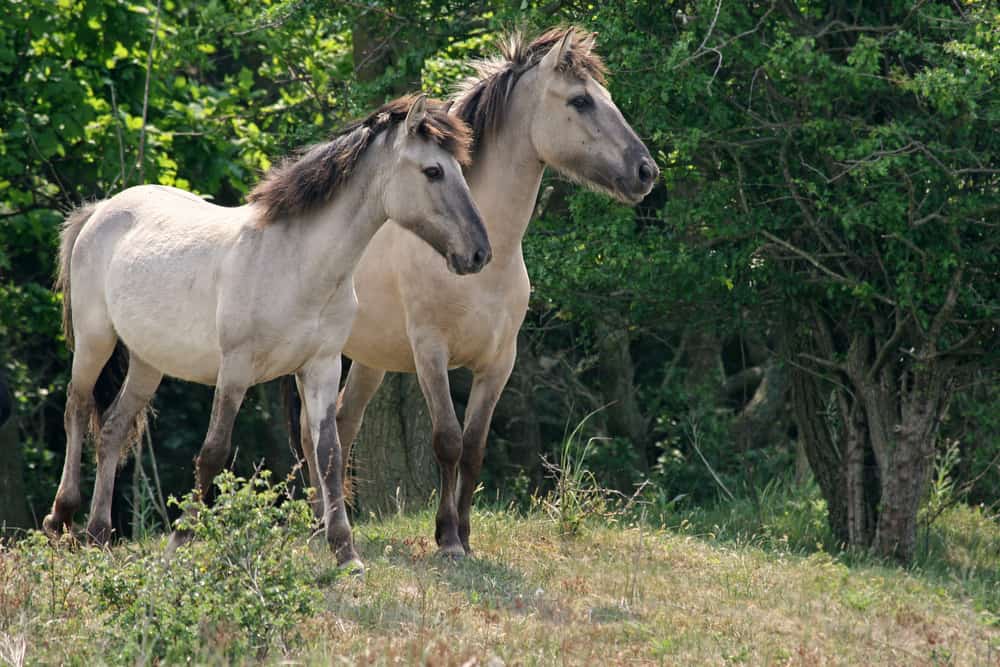 The Konik pony is native to Poland, and there are still semi-feral populations in parts of the country. The name is Polish for “small horse”.

The Konik is descended from the horses of the Bilgoraj region of south-eastern Poland. It was once believed to be closely related to an extinct breed of eastern European wild horse, the tarpan. DNA testing has debunked that theory, however, proving it’s closer to modern domesticated breeds.

Today it lives in a number of nature reserves in Poland, including the Roztocze National Park. And although it’s semi-feral, breeding is carefully managed.

It’s a small, stocky horse, standing between 12.8 and 13.8 hands. It has a small head, low-set neck and thick mane. Its coat is blue dun, often referred to as “mouse gray”. 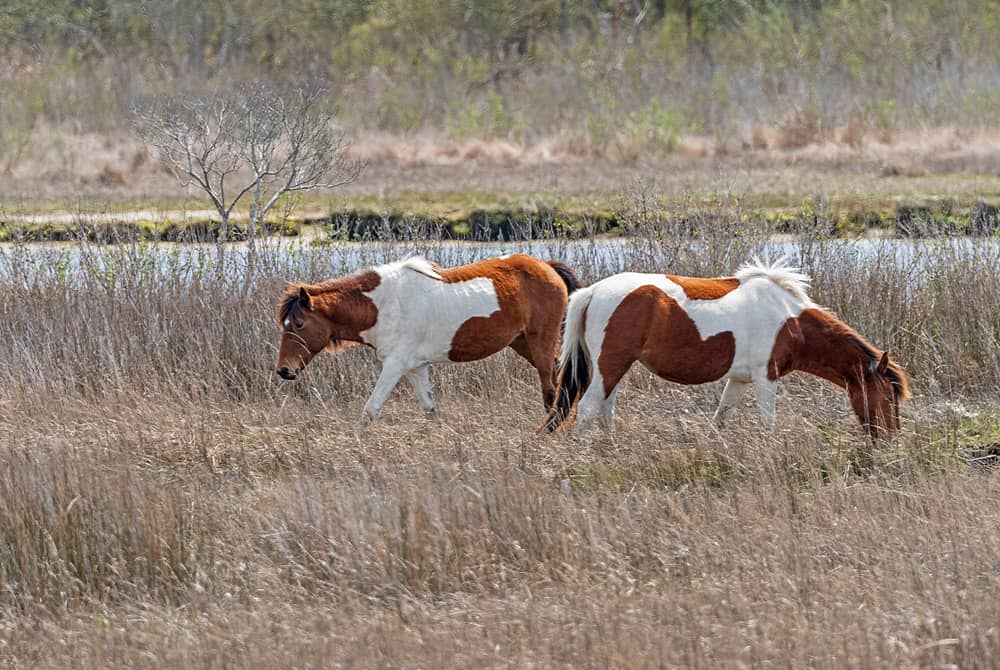 Chincoteague ponies are found on Assateague, a barrier island which forms part of both Virginia and Maryland. The state boundary is marked by a fence. The ponies on the Virginia side are referred to as Chincoteague, while those on the Maryland side are usually called Assateague horses.

The Chincoteague are horse-like in all but stature. The diet of brush and salt marsh plants available on the island doesn’t allow them to grow very big, They typically stand around 13.2 hands, and their coats can be any color, including pinto patterns.

There’s disagreement about how the horses came to be roving the island. Some believe they were survivors of wrecked Spanish galleons. But a less romantic explanation is probably more likely.

In the 17th century, new livestock taxes were introduced. It’s possible that the colonists of the time released their horses on the island to escape the tax collectors.

Today, some of the ponies are rounded up annually and sold to contribute to the costs of the Chincoteague Volunteer Fire Company. As a result, while there are only around 300 ponies on Assateague, about a thousand live elsewhere. 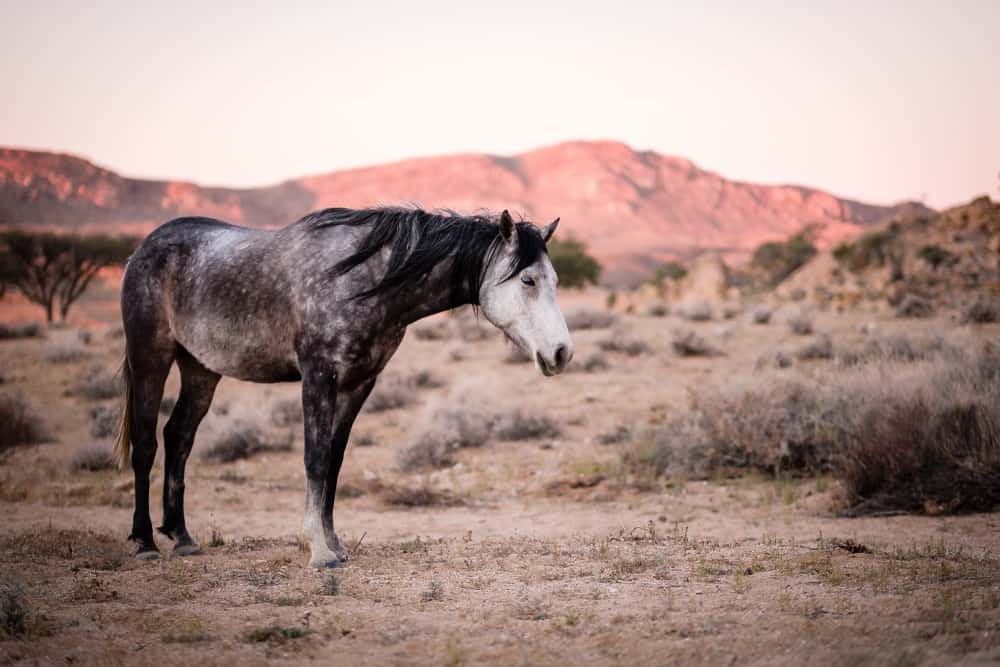 The Namib Desert Horse is the only breed of feral horse in the whole of Africa. They live in the Garub Plains of Namibia, where a man-made water source allows them to survive.

Their origins are unclear, but the best guess is that they are descended from German cavalry and riding horses. These are thought to have been released from camps and farms around the time of the First World War.

Today, their grazing grounds are protected as part of Namibia’s Namib-Naukluft Park. And despite the harsh conditions of the desert, they are mainly in good condition. Their numbers vary between around 90 and 150 animals, and they’re a real draw for tourists to the country, 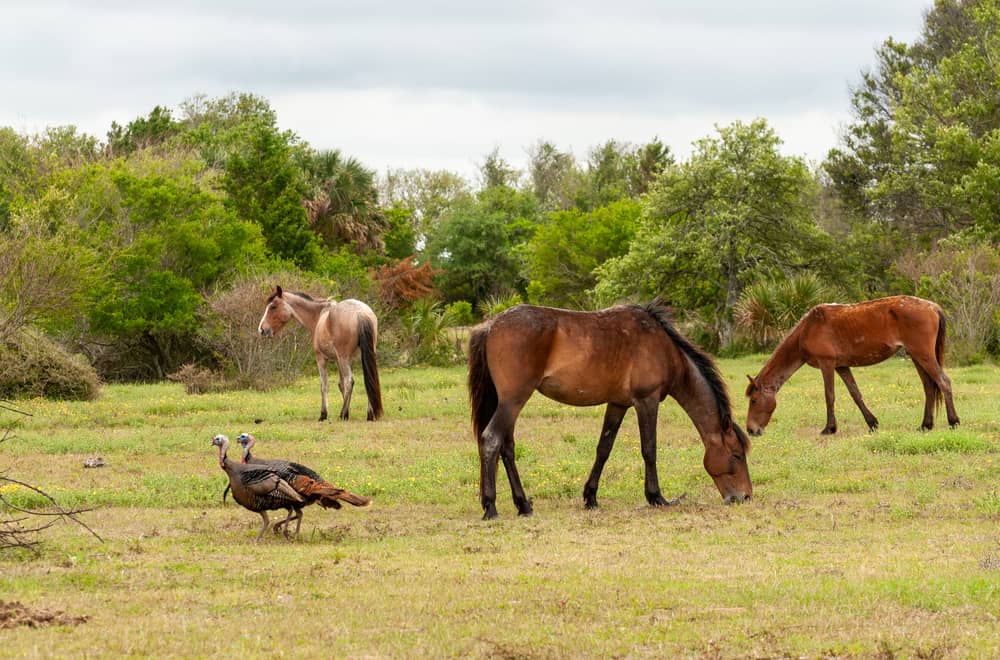 Georgia’s Cumberland Island horses are similar in appearance to those of Chincoteague and Assateague. Legend has it that they are descendants of horses brought to the area by Spanish conquistadors.

It’s more likely, however, that their origins are more recent. Other horses were brought to the region by the English in the 1800s. These could well be the ancestors of the modern Cumberland Island horses.

They are elegant animals, but they’re also problematic. There are around 150 to 200 horses in the herd, and various studies have concluded that they are over-grazing their habitat. One attempt to impose a management plan to reduce numbers was blocked in the House of Representatives.

So for now at least, the horses continue to roam free. 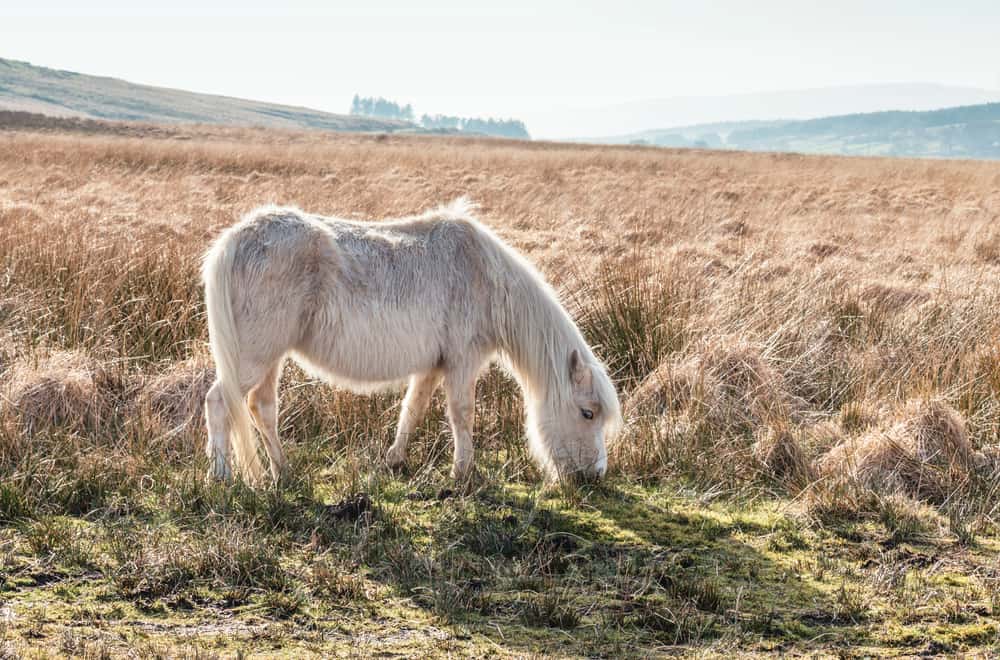 The Welsh Mountain Pony evolved from horses which roamed the land that is now Wales from at least 1600 BC. They are sturdy animals, well adapted for survival on rugged terrain with sparse vegetation. They stand no higher than 12.2 hands and have small heads with large eyes.

In the past, they were used for everything from farming, to riding, to pulling cannon onto the battlefield. Their versatility continues to this day, with Welsh Mountain Ponies competing in dressage, hunting, jumping and endurance riding.

The breed is well known and well loved. In 2008, when ceramic manufacturer Breyer created its first Large Pony Hunter, they chose a gray Welsh Pony as their model. 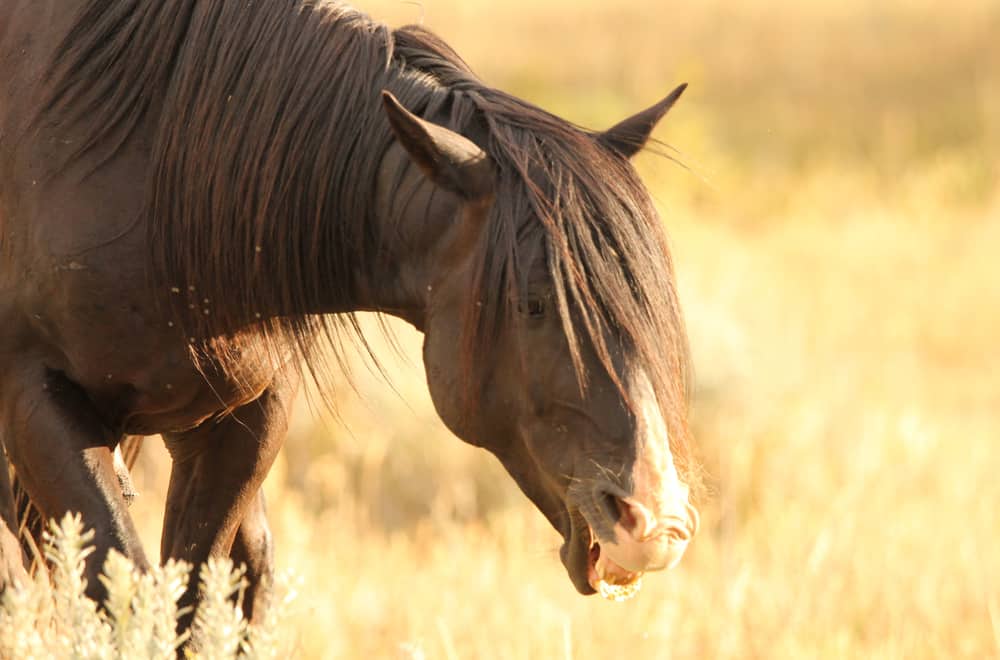 The rugged terrain of North Dakota is home to the Nokota, herds of feral and semi-feral horses. They are descended from the horses of Native Americans and a range of other breeds.

Their coats are most usually blue roan, and they have a gait known as the “Indian shuffle”. This is more lateral than up-and-down, making them comfortable to ride.

The breed was almost wiped out early in the twentieth century. This was a result of ranchers trying to reduce competition for the grazing land used by their livestock. But thankfully, some horses were in the area that in 1943 became the Theodore Roosevelt National Park, offering them protection.

There they remain to this day, with the herd managed so that numbers stay around 100. If numbers get too large, the horses are sold, to be used in endurance, English and Western riding. 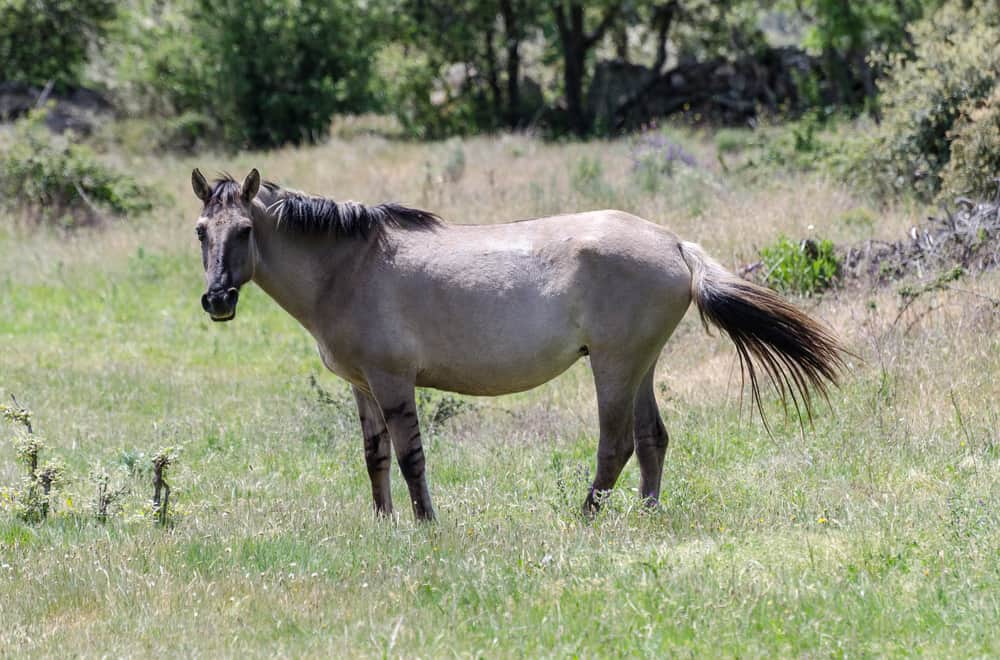 The Sorraia can be found in the Sorraia basin in Portugal. They are indigenous to the area, and some believe them to be the descendants of primitive horses. They certainly have some primitive features, including dun coats, convex profiles, and sometimes a dorsal stripe.

They’re small but hardy animals, and can stand anything from 12.3 to 14.3 hands. In some adults, the way their hair lies on their necks and chests can create a pattern of flags and stars.

Today, numbers have dwindled to the low hundreds. But efforts are underway to preserve the breed, including the establishment of a Sorraia Mustang reserve in Ontario, Canada. 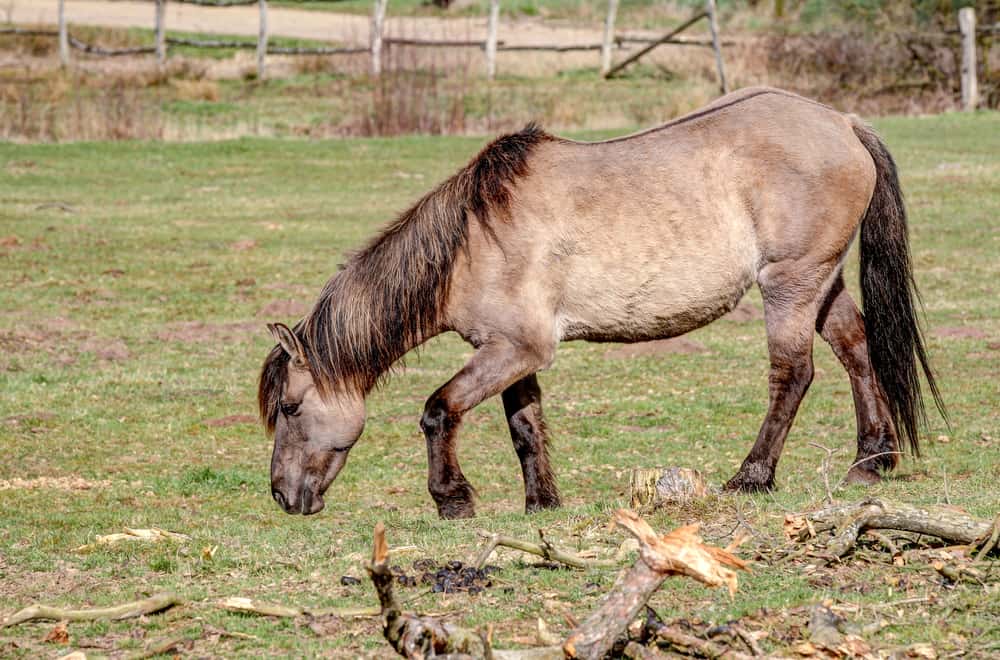 The Dülmener horses take their name from the town of Dülmen in north-western Germany, near which they live. The herd consists of around 300 animals living in an area of 350 hectares.

They originally had dark chestnut coats, but it was once believed that this was a result of cross-breeding. As a result, a programme began to make them appear more “authentic”. From 1957, only the gray-coated Polish Koniks were allowed to breed with Dülmeners.

But in 2009, more research discovered that a mistake had been made. The Dülmener, it appeared, had originally been chestnut after all. By then, it was too late. Today’s horses look almost the same as the Konik. 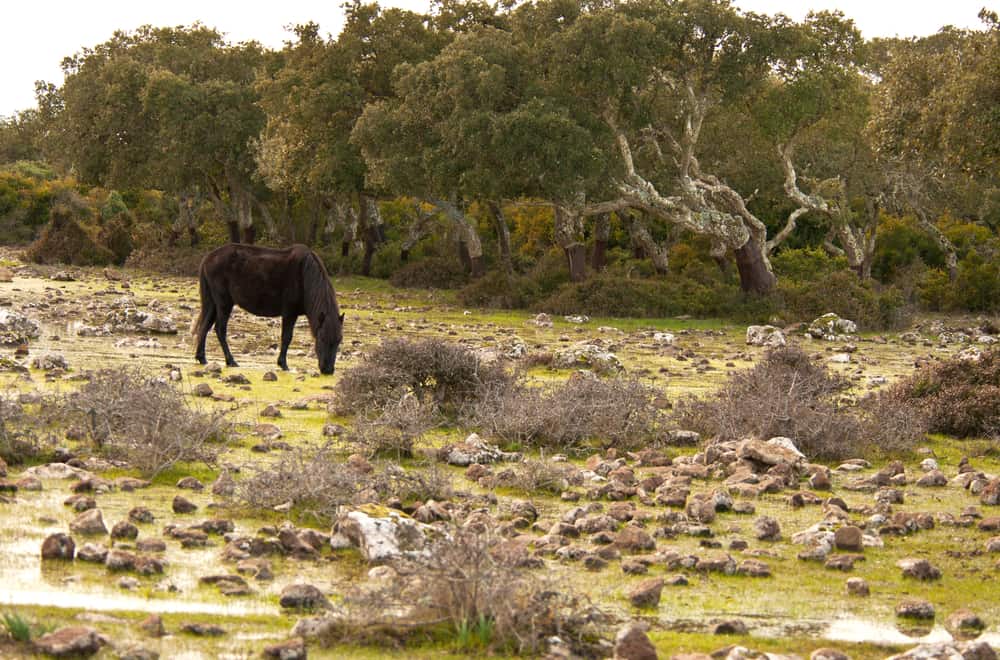 The Giara horse is a native of the Mediterranean island of Sardinia. The relatively poor vegetation there keeps it to a pony-like size of between 11.1 and 13.1 hands. But it is nevertheless a true horse, with a coat that’s usually bay, black or chestnut, and a full mane and forelock.

Its origins are lost in the mists of time. It’s thought that the horses originally came to the islands on the boats of Greek or Phoenician traders, as early as the 4th or 5th century BC.

Today, around 700 horses live on a plateau on the south of the island. The steep cliffs that surround it generally keep them safe from human interaction.

The Retuerta can be found living in a handful of parks and nature reserves in the Spanish region of Andalusia. It is considered to be one of Europe’s oldest breed of horses, dating back around 3,000 years. And it is the only one not to have come into contact with other breeds of horse.

Unlike many other feral breeds, the Retuerta is indigenous to the region it’s currently found in. It’s thought to look similar to the ancient horses of the Iberian peninsula. It stands around 16 hands, with a gray or dark bay coat.

Although they’re occasionally used for riding, they’re not particularly easy to train. At one point, there were only around 75 horses remaining. Today, preservation efforts have seen the numbers grow to about 200. 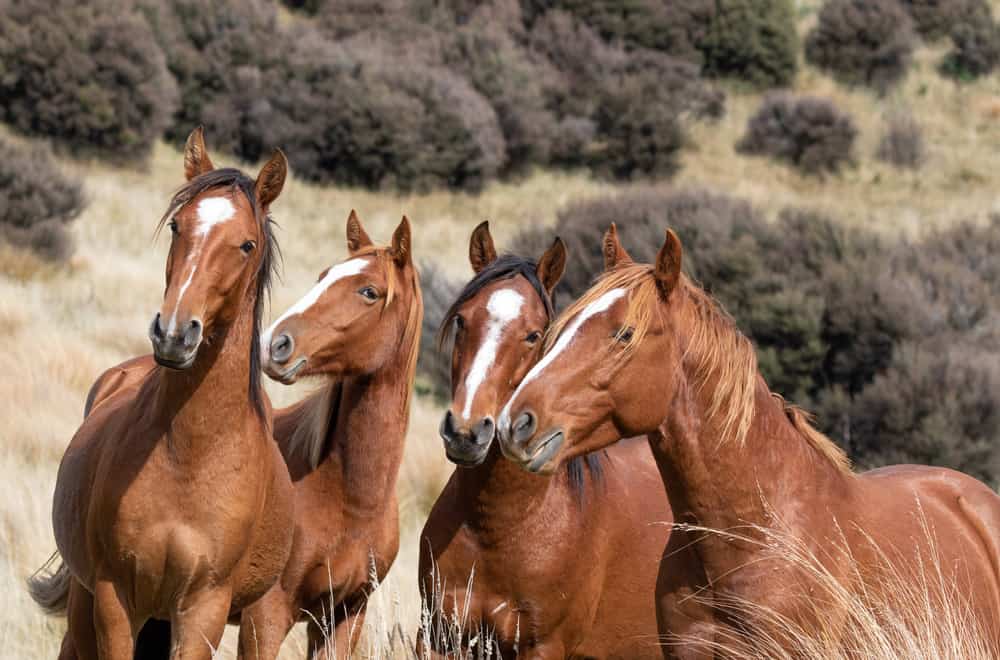 Kaimanawa horses are found on the mountain range of the same name, in New Zealand’s North Island. There’s also a smaller population further north, in the Aupouri Peninsula.

They are the descendants of horses that escaped from cavalry bases or sheep stations. And while there’s plenty of variety in their heights, coats and body patterns, they’re all sure-footed, resilient and well-muscled animals.

The herd in the Kaimanawa range is carefully managed to preserve the region’s unique vegetation. From time to time, excess animals are rounded up and rehomed. They are popular for riding, as stock horses and in show jumping.

That brings us to the end of our look at 14 wild horse breeds! From Mediterranean islands to African deserts, horses show remarkable abilities to survive in all conditions. We hope you’ve enjoyed learning more about the history and characteristics of these amazing animals.

In some cases, sadly, their numbers are dwindling. But active preservation may help to protect them for generations to come. Check out breed associations and wildlife groups if you’d like to find out more – and perhaps get involved yourself.