Did you know that your horse or the one next door could be a bay horse? Surprisingly, understanding bay horses is more complicated than you ever thought. If you fancy horses, there are multiple defining factors of this unique gene that you should know.

Bay is the standard color that describes a horse coat. To be considered a bay gene, a horse must exhibit a black base color as well as the dominant agouti gene that alters the color of the coat.

What is a Bay Horse?

A bay is a type of horse breed characterized by brown or reddish coat color. It also has a black coloration on its point which includes the mane, lower legs, ear edges, and tail. The bay gene is the most dominant gene found in horses.

Although most bay horses are brown or reddish in color, they still exhibit a color variation. This ranges from a light copper red, bloody red, or extremely red color pigment.

The shade variations on a bay horse are influenced by a number of factors including grooming, nutrition, and genetic properties.

Genetic Characteristics of a Bay Horse 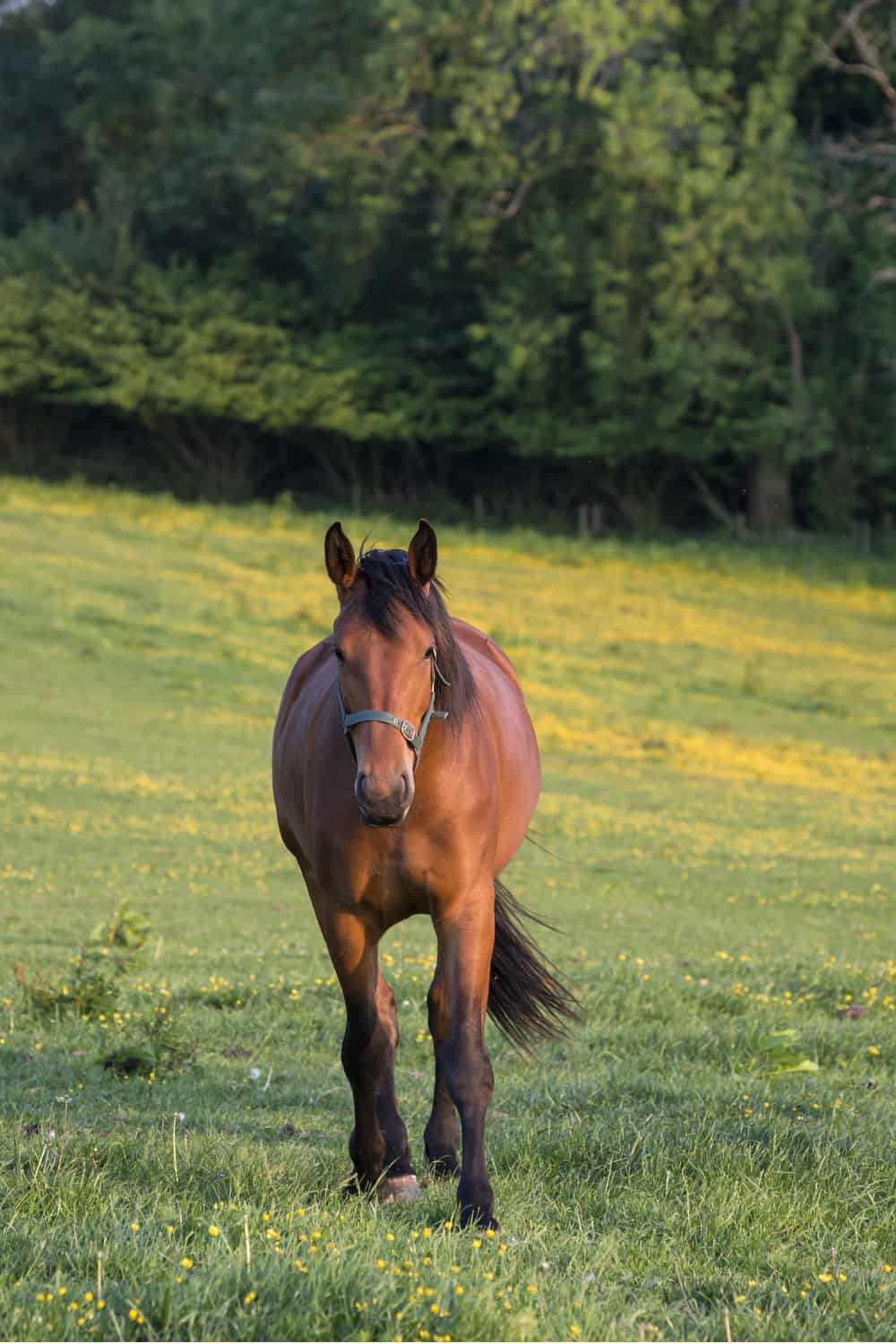 Not all bay horses have the same appearance. They may vary in shades, patterns, and colors. However, a specific genetic combination is only unique to bay horses.

According to genetic researchers, a bay horse is born from a combination of two main genes. They include the E allele and agouti genes.

The E allele gene is also known as the extension gene while the agouti gene is sometimes referred to as the suppression gene. Without these two genes, a bay horse cannot exist.

However, in exceptional circumstances, a bay horse may have a different color strain. This is due to the action of additional alleles on the two base colors.

The Allele and Agouti Genes

As mentioned, bay horses contain both the allele and agouti genes. These two genes are mutually dependent on each other to produce the horse strain.

All bay horses contain at least a single E allele (extension) gene. This may be an E/E or E/e type. The extension gene produces a protein receptor (Melanocortin) which allows the formation of black pigments on the horse’s hair.

If a horse does not have a dominant copy of this gene, black pigments cannot form on its hair. Such a horse will appear completely red in color. A horse needs at least one E allele gene to become bay.

The agouti gene produces a protein peptide (Asip) which distributes the black pigments over the horse’s skin. A dominant agouti gene leads to the formation of the black base color on the horse’s points. The result is a standard bay horse with a reddish body and black points.

If a horse doesn’t have a dominant, functional copy of this gene, the protein Asip cannot be produced. This results in a wholly black coat.

One unique characteristic of the agouti gene is that its ability to influence the horse’s genetic characteristics is limited. This is because it only directs the distribution of black pigments.

As a result, it has little influence on other horse variations such as chestnuts which have no black points.

The Most Common Color of Mammals

Most wild mammals exhibit a predominantly black color. This is evenly distributed to the eyes, skin, and entire coat. The alleles gene is responsible for this black pigmentation. A horse that has two allele genes will have black pigments over its entire coat.

Some wild animals have additional genes that may limit the distribution of black pigments on their coats. This leads to the formation of other lighter color combinations such as a light underbelly.

However, if there is no other gene that regulates the black color, it will be distributed throughout its hair.

Wild animals have a genetic pattern of color distribution that promotes camouflage. These genes restrict the distribution of black pigment on certain parts of the coat or hair.

The camouflage effect is controlled by the A, B, and C types of the agouti gene. It forms a gray coat color with black-tipped hair on the animal’s body. This enables the animal to camouflage into a color that potential predators cannot easily see.

Did you know that bay horses may be influenced by the wild pattern genes? Previously, the wild, black, genetic pattern was present among horses.

However, horses that exhibited this genetic pattern became extinct. Despite this, the bay horse still has traces of the wild genes A, B, and ED.

The A gene present in bay horses is not an original variation. It is, therefore, less effective in producing a wild pattern in bay horses.

The B gene, on the other hand, is a recessive variation that has undergone mutation. When combined with an allele gene, it produces a black or recessive brown color.

A combination of ED allele, dominant, and black genes produces a bay colt. This happens because the ED gene can conceal the A pattern gene.

Bay horses have various color tones. Despite this, the underlying common factor is the basic genetic pattern. They all have a specific genetic combination that defines them.

The most common genetic combinations include EEaa, EEAa, EeAA, and EEAA.

These genetic combinations are present in all bays. However, bay horses can still have other combinations within their bodies.

This may produce a range of colors including red, mahogany, and creamy white. Extremely dark bays may oftentimes be mistaken for their black counterparts.

What Colors Define a Bay Horse? 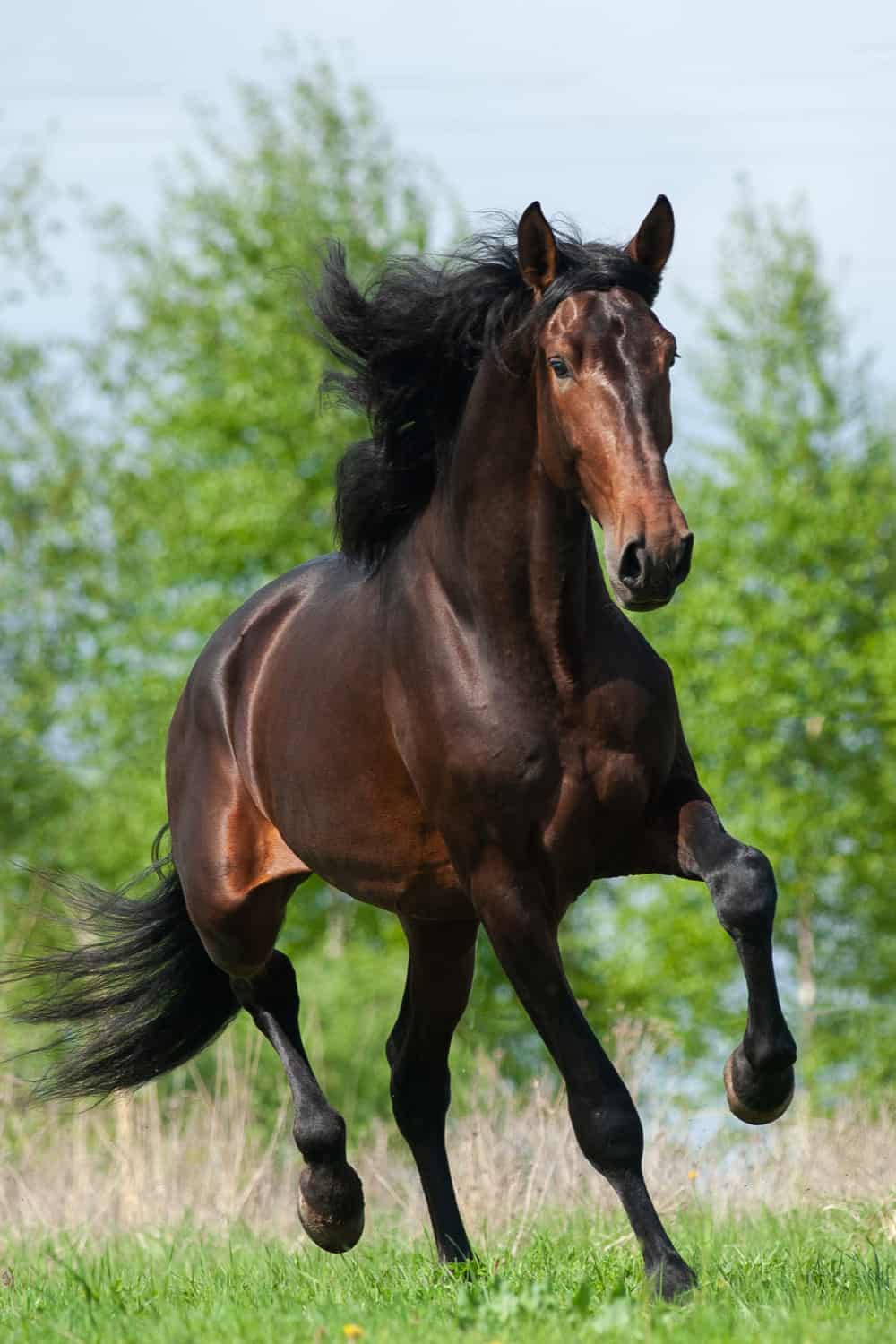 Primarily, a bay is the product of both agouti and allele genes. When an additional equine gene acts on a bay template, it changes the basic pattern. This produces multiple shades and patterns.

Below are common shades of bay horse colors:

They have a combination of both red and black pigment that forms a dilute shade of crème gene. They have blue eyes and slightly pinkish skin. Sandy bays, however, have a single crème gene.

They have at least a single dominant champagne allele. As a result, the dilution of red and black pigments forms a brownish, gold color.

Though the color effect is similar to the buckskin, amber champagne horses have hazel eyes and chocolate points.

The bay roan possesses a dominant roan gene. Its coat consists of a combination of a white and red-bodied coat. Bay roan horses are also known as red roan.

As the name suggests, they possess a specific Lp leopard pattern. The leopard gene produces dramatic characteristics such as striped hooves, mottled skin, and a white patch around the eyes.

Buckskins have a dominant allele crème. They are characterized by a black point (mane and tail) and cream or golden coat. They also have black lower legs. At times, their coats may be lighter with no traces of red tints.

Bay duns have at least a dominant dun allele gene. They have a dark stripe that runs down the center of the mane, tail, and back. The stripe is darker than the horse’s coat. Dune horses also have other unique marks such as striped legs.

Some bay duns are also referred to as Zebra duns because they have stripes. Zebra duns also have yellow shades on their coats and black points.

Although bay duns are similar to buckskins, their coats are not as bright as those of buckskins.

Unlike other bays, silver bays exhibit a silver color. This is due to the dominant silver gene present in them. The silver gene influences the horse’s hair.

As a result, hair on the points turns silver and the coat is diluted into a grey or brown color. Silver bays, therefore, have a chocolate coat, a lighter mane, and a tail.

Bay pintos have numerous white spotting genes. These include splashed white, frame overo, tobiano, and many more. Some pintos also have white spots on their base coats. 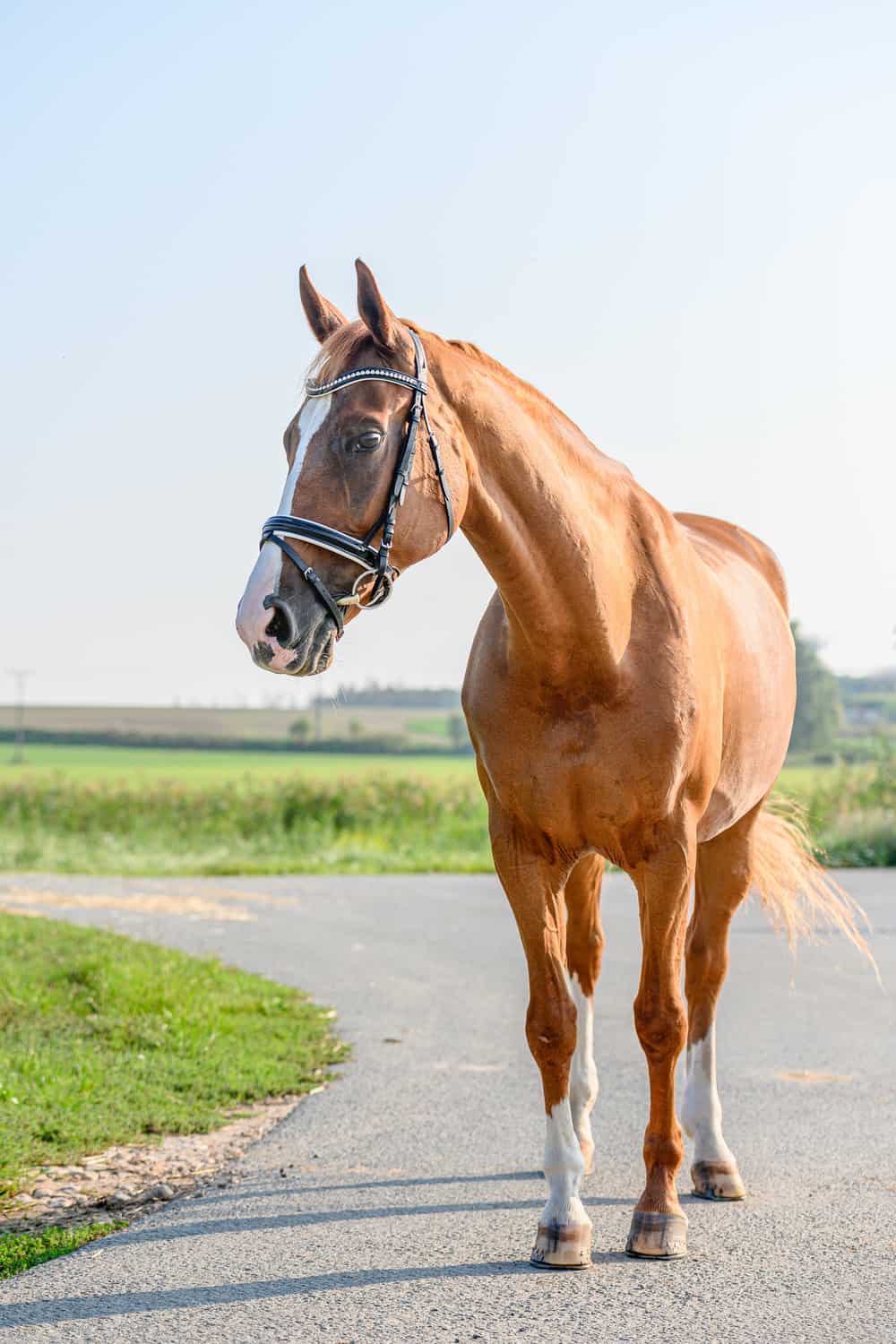 Bay horses possess unlimited, unique features. As a result, people have many questions that seek to answer fun facts about bay horses.

Look at some of the commonly asked questions on this unique horse breed.

Which Breeds Have Bay Horses?

Most horses do not belong to the biological class of bay horses. They do not contain specific gene combinations that are characteristic of bay horses. However, bay features are present in some horses.

Some horse breeds that have bay features include:

Which Breeds Don’t Have Bay Horses?

Although some horses belong to the biological class of bay horses, some do not contain any trace of bay genetic combinations. These horses are purebred and do not mix with their bay counterparts.

They include the following:

Which Is The Most Popular Bay Coat Color?

The most popular bay coat color is the standard bay. It is characterized by a reddish-brown coat. It also features black points on the tail, mane, lower legs, and ear edges.

The standard color is evenly distributed throughout the coat, without any variations in the tone.