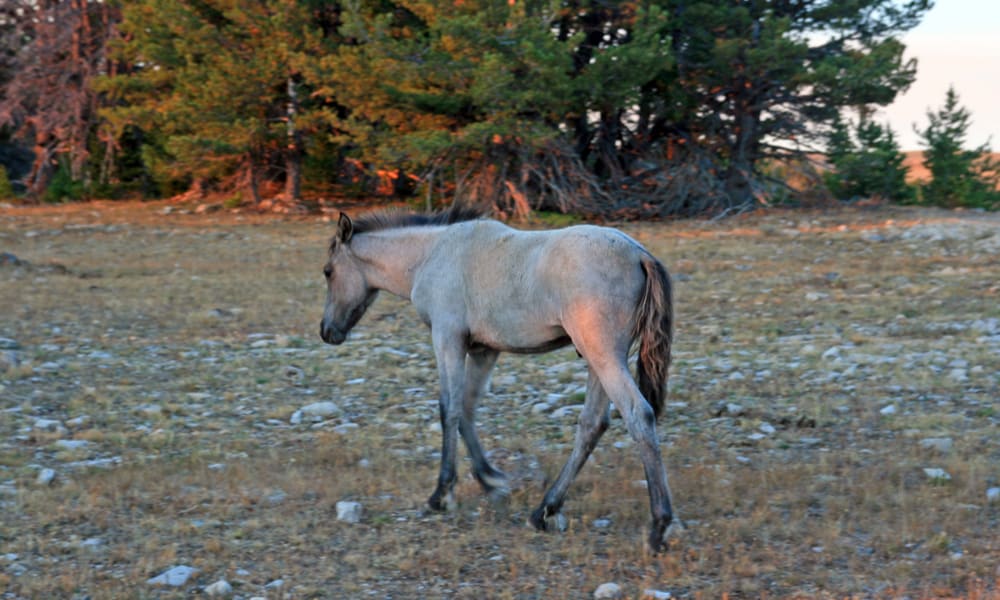 Horses come in a whole range of shapes, sizes and colors, and one of the most striking coat types is blue roan.

But what is blue roan? How can you distinguish true roan from the “imposters”? And which breeds of horse can display this color?

Here, we answer these questions and more as we give you a list of 10 blue roan horse breeds. 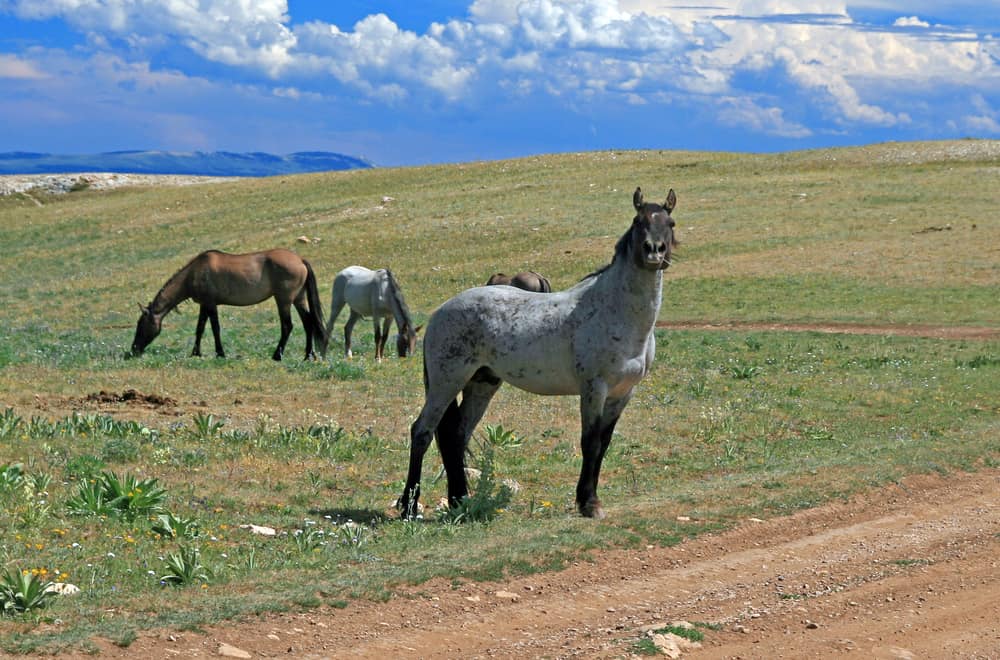 Let’s start by talking about what exactly roan means.

Horses’ coats are colored by two basic pigments, black and red – with “red” being a reddish-brown color.

These two colours combine to produce the three base coat colors of chestnut (red hairs only), black (black hairs only) and bay (a mixture of the two).

One possible combination is an even mixture of base coat hairs and white hairs covering the whole of the horse’s body, with the exception of the head and the points (lower legs, mane and tail), which can create some striking and distinctive effects.

This combination is what’s known as “roan”, and there are three main types:

Roan coats are present at birth, but the color may not become apparent until after the horse sheds its foal coat.

An important feature of true roan is that the color doesn’t fade as the horse ages. However, it may vary throughout the year as the length of the horse’s coat changes with the seasons.

Here is a list of some of the most common horse breeds you are likely to meet that are capable of producing a blue roan coat. 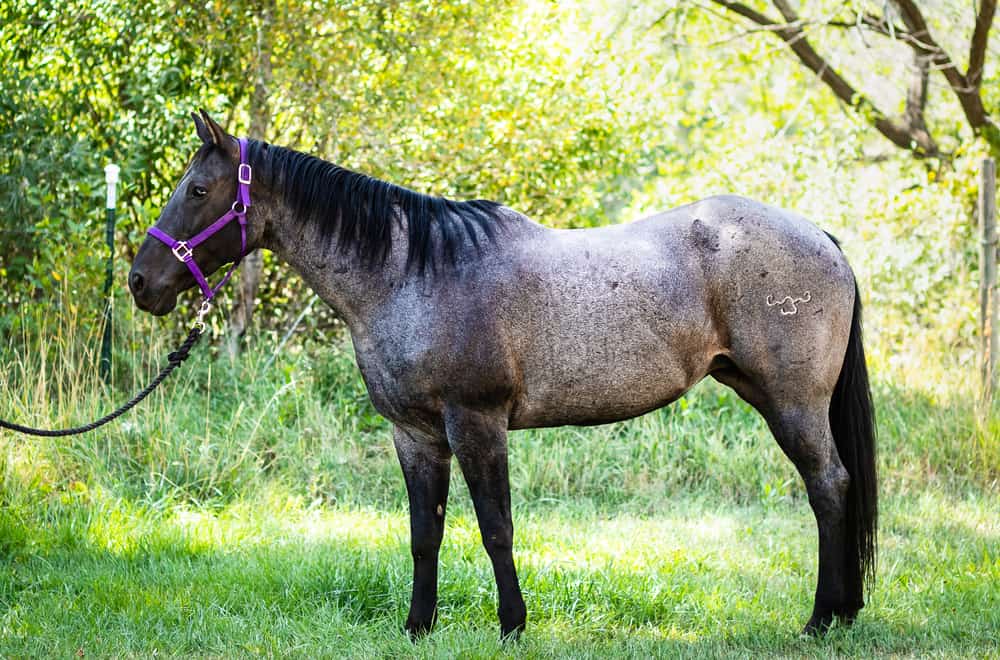 The American quarter horse is known for its ability to run at high speeds over short distances – the name of the breed comes from its prowess over the quarter mile.

These horses come in nearly all colors, including blue roan – although the most common color is sorrel (a brownish red that is usually considered a type of chestnut in other breeds).

As well as for racing, these horses are commonly found in rodeos and western riding events. They are a good choice of horse for ranch work, and they are sometimes also used in disciplines such as show jumping and dressage as well as for hunting. 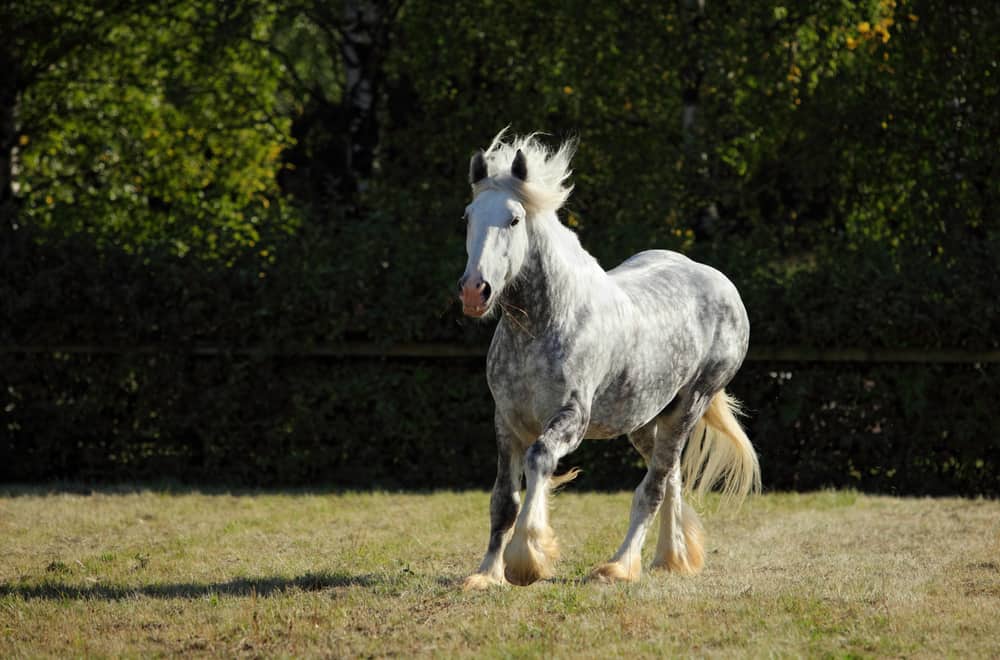 This breed of large draught horse was originally developed in the Huisne river valley in western France, part of a province formerly known as Perche, hence the name.

Their ancestors were bred as war horses, but they were later used for pulling stagecoaches and in agricultural work. They were also used as beasts of burden in the First World War.

Percherons are handsome animals known for their strength, stamina and willingness to work. Notably, they are used at the Disneyland resort in Paris to pull trams. 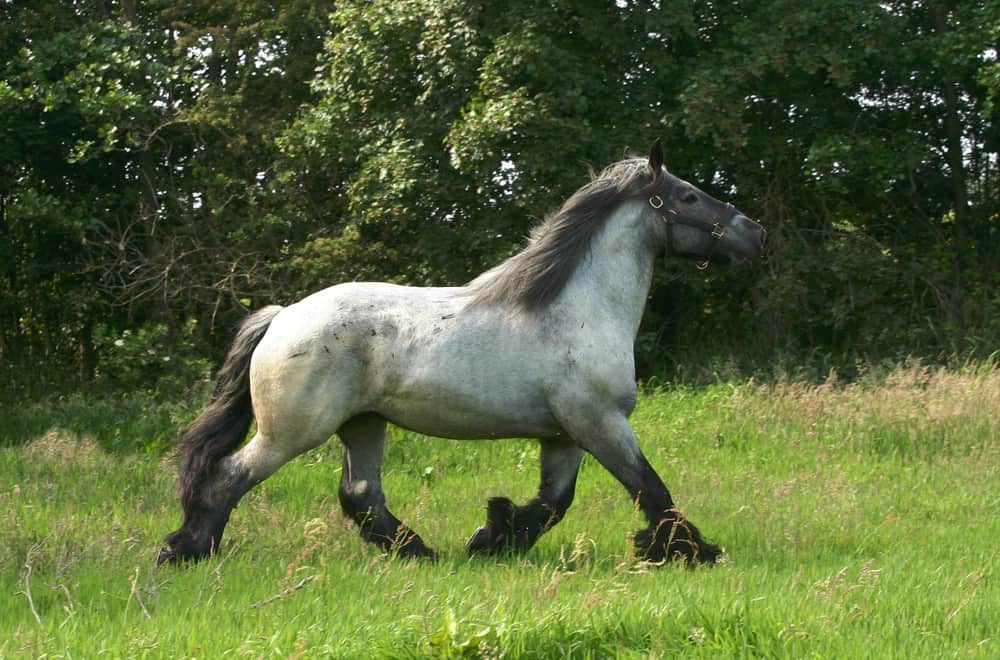 Big, powerful and muscular, Brabants and Belgians are among the strongest of all draught horse breeds.

Brabants were originally bred in the Belgian region of the same name, but confusingly, the horses known as “Belgians” are actually a closely related but separate North American breed. Belgian horses are now the most common type of draught horse in the United States.

Generally speaking, American Belgians tend to be slightly smaller than their European cousins. The typical color in North America is light chestnut, but both Brabants and Belgians can also exist as blue roans.

This breed is known for its pulling prowess, and they are also popular as show horses as well as for pleasure riding. In Belgium, they are still used as workhorses – and they are also bred for their meat, which is highly regarded. 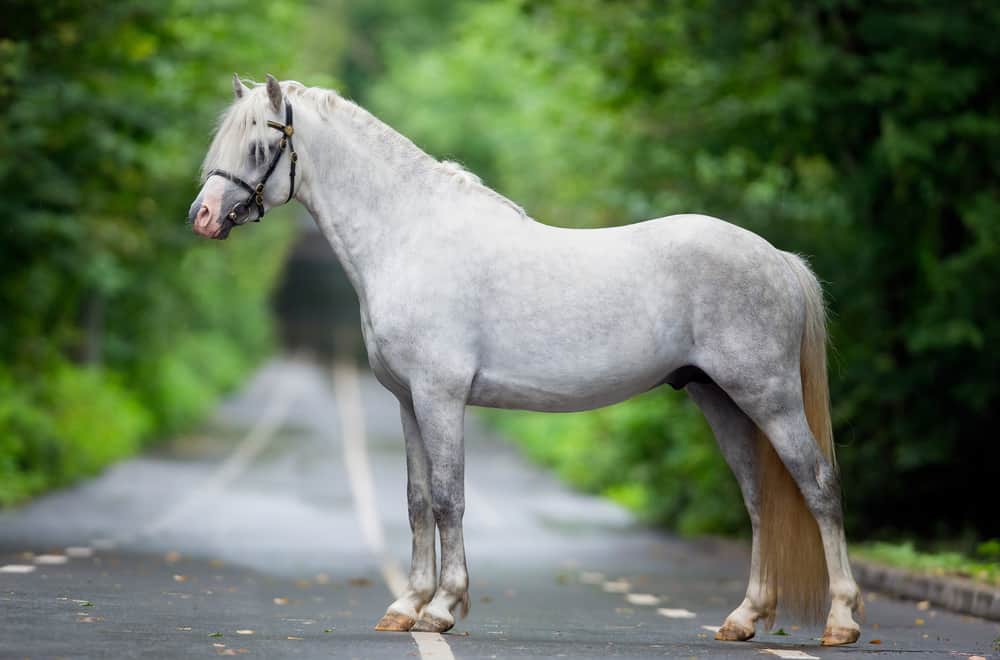 Welsh ponies and cobs are small horses that originated in the mountains of Wales in the United Kingdom. There are several different types, but all have small heads, large eyes, sloped shoulders, short backs and strong hindquarters.

They are known for their impressive stamina, friendly nature and easy disposition, and this, along with their diminutive size, makes them a popular mount for children.

They exist in many colors, with black, gray, chestnut and bay being the most common. However, roan Welsh ponies can also be found, including blue roans. For registration, any solid color is acceptable, but tobiano or coats with leopard complex patterning are not allowed. 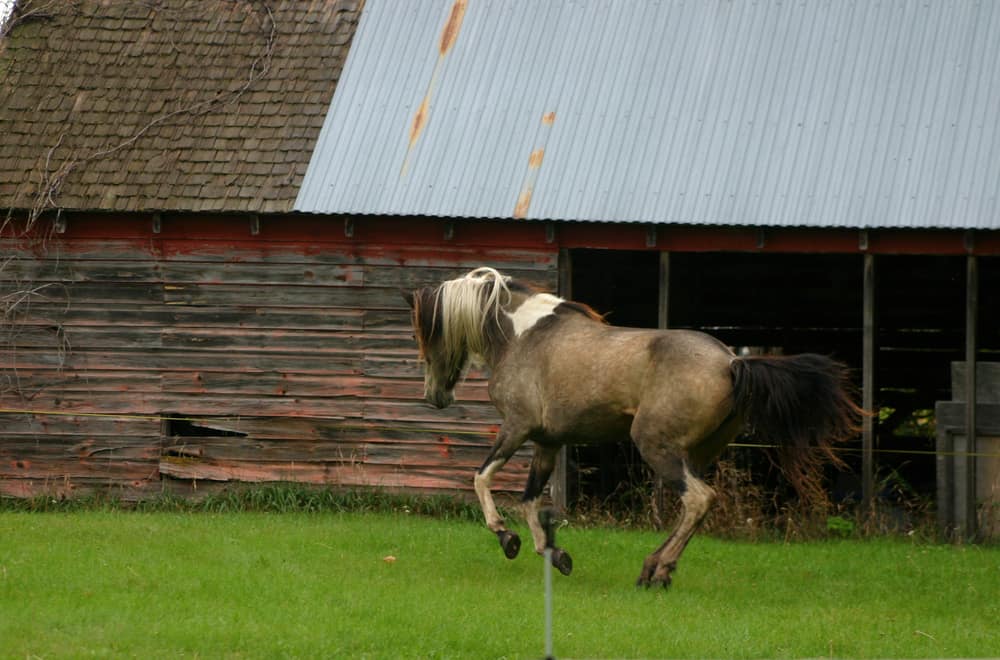 The paso fino is a breed of gaited horse that was developed on the Caribbean island of Puerto Rico and is descended from the horses of Spanish explorers and colonists of the 16th century.

They are an elegant and versatile horse that is suitable for a range of activities but are especially common choices for trail riding.

Due to the local terrain on Puerto Rico, a sure-footed, hardy and dependable mount was required, and the paso fino was the result of several centuries of breeding with this goal in mind.

Nowadays, the breed has no restriction on color for registration, and while the most common colors are bay, chestnut, brown and black, the roan gene is present in the breed and blue roan paso finos also exist.

Paso finos are relatively small horses and the breed is known for its smooth gaits as well as its ability to carry a heavy load. 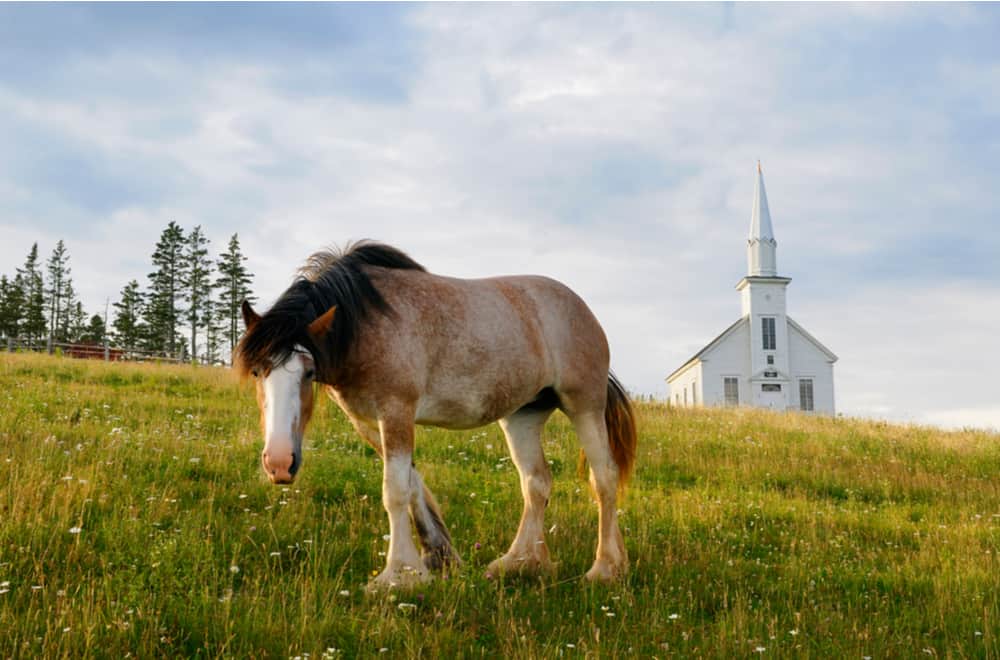 The Breton, which exists as two distinct types, is a small but stocky and muscular draught horse that originated in Brittany in northwest France. The Postier Breton is a slightly lighter, more agile horse while the Trait Breton is heavier and was often used for agricultural work.

The most common coat color is chestnut, including flaxen chestnut and chestnut roan. However, blue roans can be bred, although they are less common.

In the past, they were employed as workhorses and were also often used to improve other breeds. However, nowadays, they are most commonly bred for their meat. 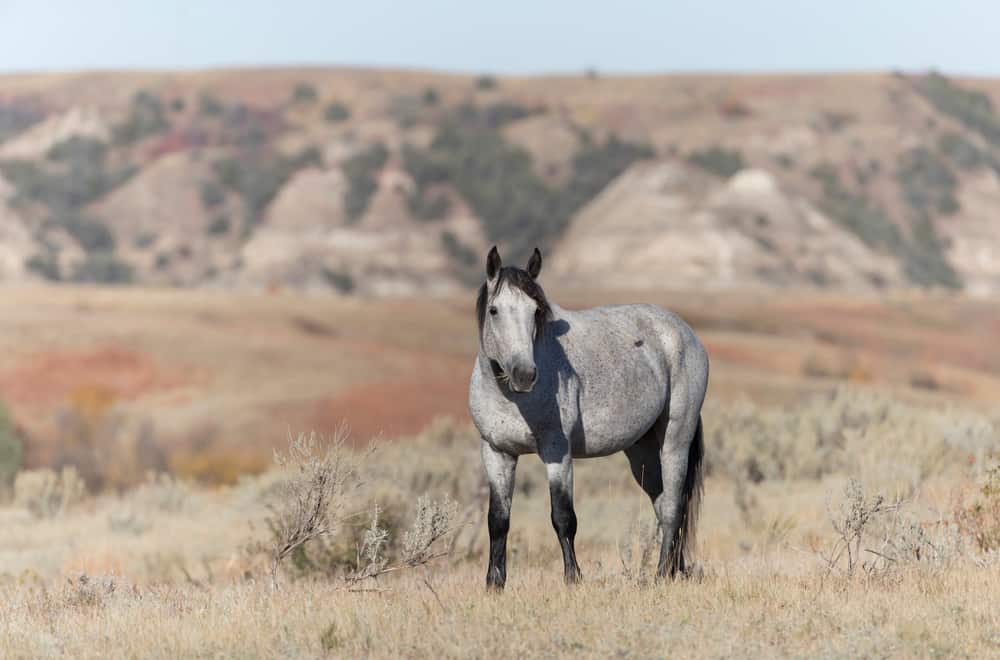 Mustangs are descended from the horses brought to the Americas by the Spanish. This means that they are technically “feral” animals, although they are commonly – and erroneously – referred to as being “wild”.

Since they are free-roaming, mustangs display a wide range of characteristics, depending on the population. This means that all coat colors are possible – including blue roan. 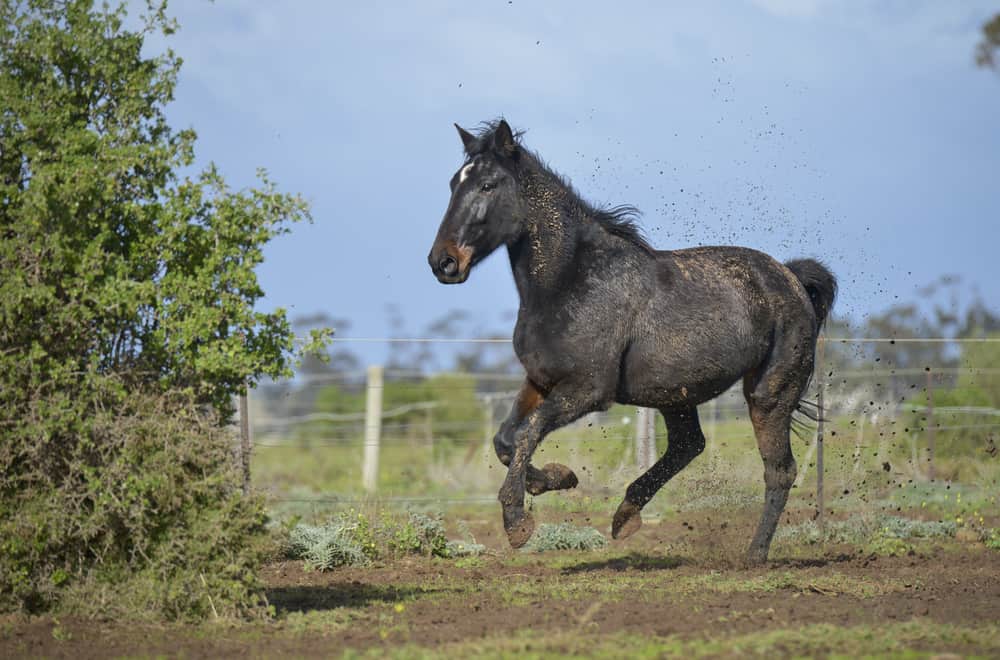 The standardbred is a North American horse mostly bred for use in harness racing. They are also popular for pleasure riding and horse shows due to their solid build and calm demeanor. Standardbreds are known to be an easy breed of horse to train.

The most common colors for this horse are bay, brown and black, but other colors are possible such as chestnut, gray and roan – including blue roan.

Although this breed was developed in North America, it can trace its bloodline back to 18th century England and a horse named Messenger that was born there in 1780. He was taken to the USA, and his great-grandson, Hambletonian 10, became the foundation sire of the breed. 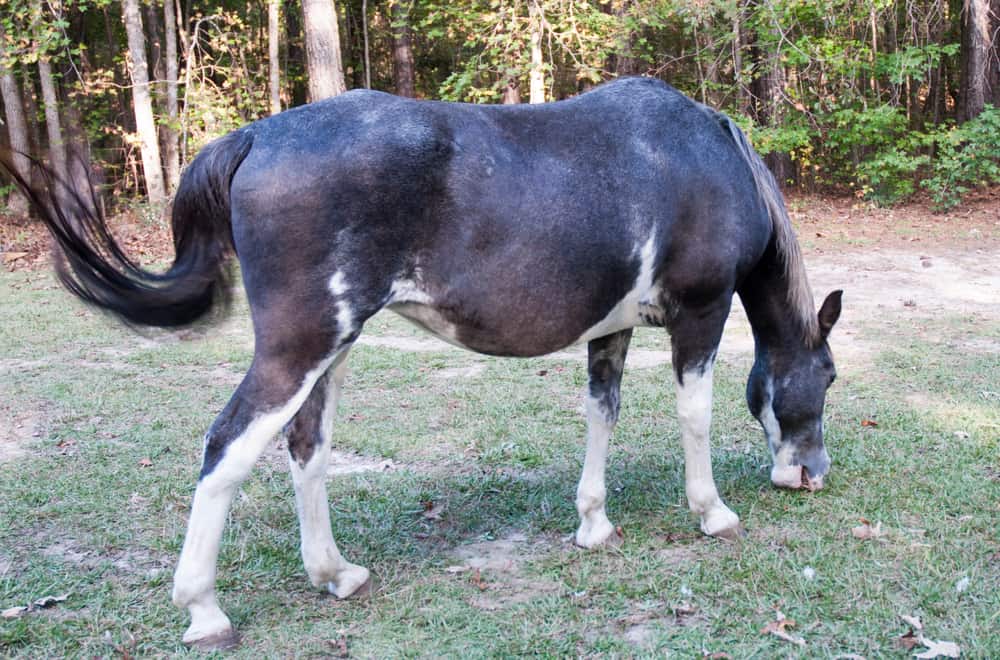 Like the paso fino, the Tennessee walking horse is a breed of gaited horse. It can move in a unique four-beat running-walk, for which it is best known.

Due to its smooth gait as well as its calm disposition and friendly character, it is a popular horse for pleasure riding. It is also found in competition in both western and English disciplines.

The most common colors are bay, black and chestnut, but gray and roan specimens exist – including blue roans. 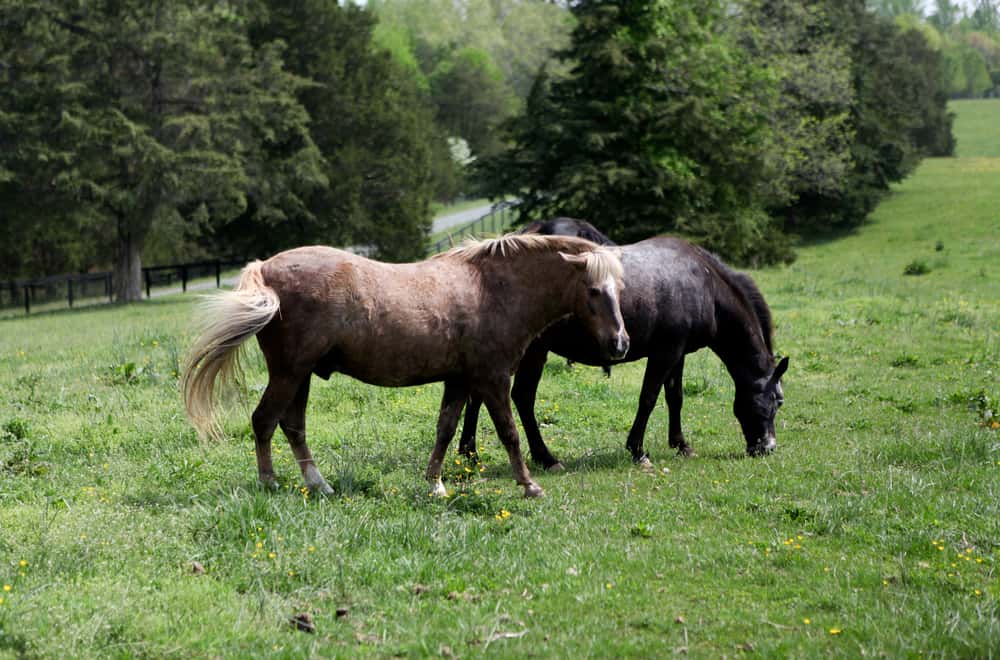 The American saddlebred is a classic American horse that dates back to the time of the Civil War, during which it was used extensively.

They are another gaited breed of horse and are valued for their gentle but lively disposition. Nowadays, they are popular horses for pleasure riding and can also be found in a range of competition disciplines.

The breed registry began in 1891. Any color is accepted – and roans, including blue roans, can occur.

What isn’t a roan?

To the untrained eye, roan horses seem to be distinguishable by their color. However, several other types of coat can produce roan-like effects.

This phenomenon is known as “roaning”, but horses displaying roaning are not considered true roans.

As we have seen, true roans have coats that consist of a combination of colored and white hairs evenly spread over their whole bodies (except the head and the points). They also have an inverted “V” pattern above the knee, something not present in other coat types.

True roan can be determined genetically to some extent through testing, and since the roan gene is dominant, two non-roan parents cannot produce a roan foal.

Here’s a list of some of the coat patterns and colors that are most commonly mistaken for true roan when they are actually something else. 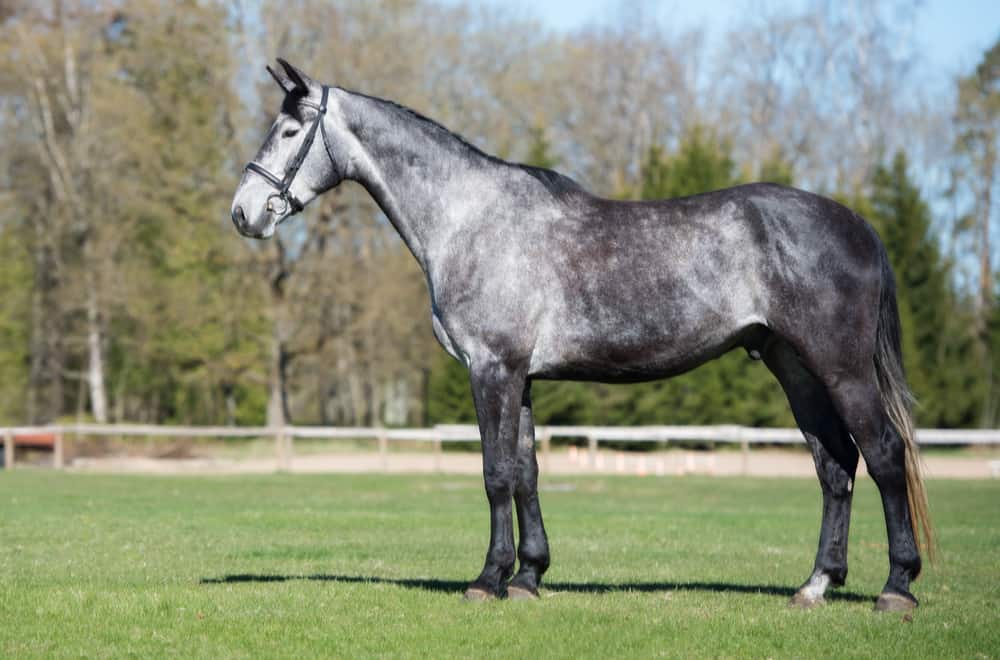 One of the coat types most commonly mistaken for roan is gray – but they are not the same.

One important difference is that while roan horses may become lighter or darker throughout the year with the seasons, gray horses become progressively lighter through their lives as they age.

Sometimes, when a foal is born, it isn’t obvious that the adult horse will be a gray – but as the horse becomes older, the gray color becomes apparent due to the appearance of increasing amounts of white hair. As this happens, the coat can look remarkably similar to true roan.

Some gray horses eventually lose all the pigmented hairs from their coats, leaving them almost completely white.

Gray is a color found in almost all species of horse and is one of the most common coat colors. 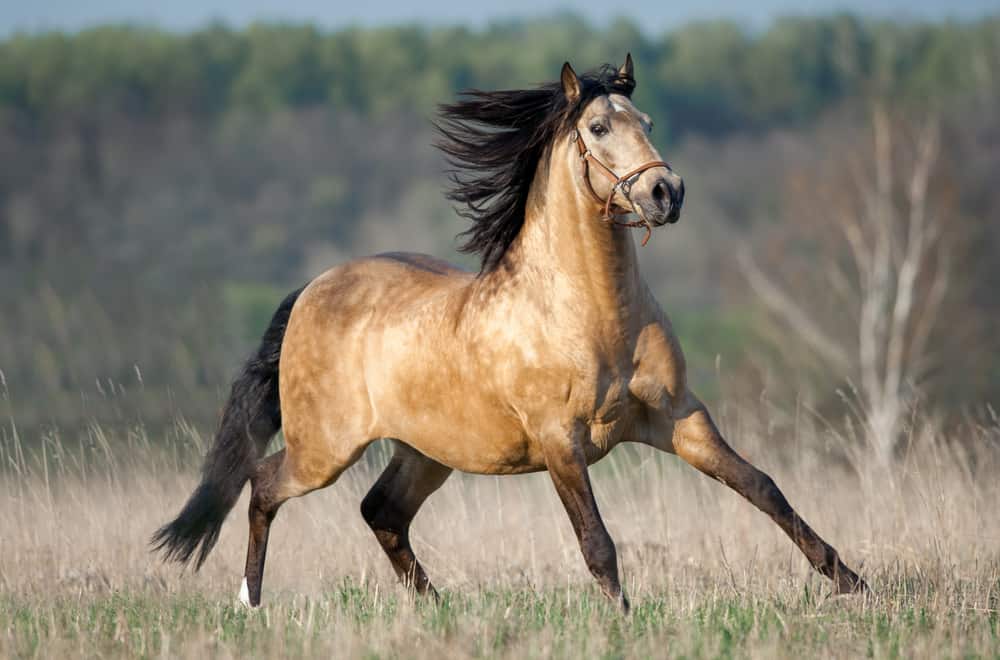 Blue dun – also known as “grullo” – is easy to mistake for blue roan, but the two coat types are caused by different genes.

The grullo color is caused by low amounts of pigments appearing in each hair rather than the interspersal of black and white hairs over the body. In a grullo, all of the hairs in the coat are the same color. 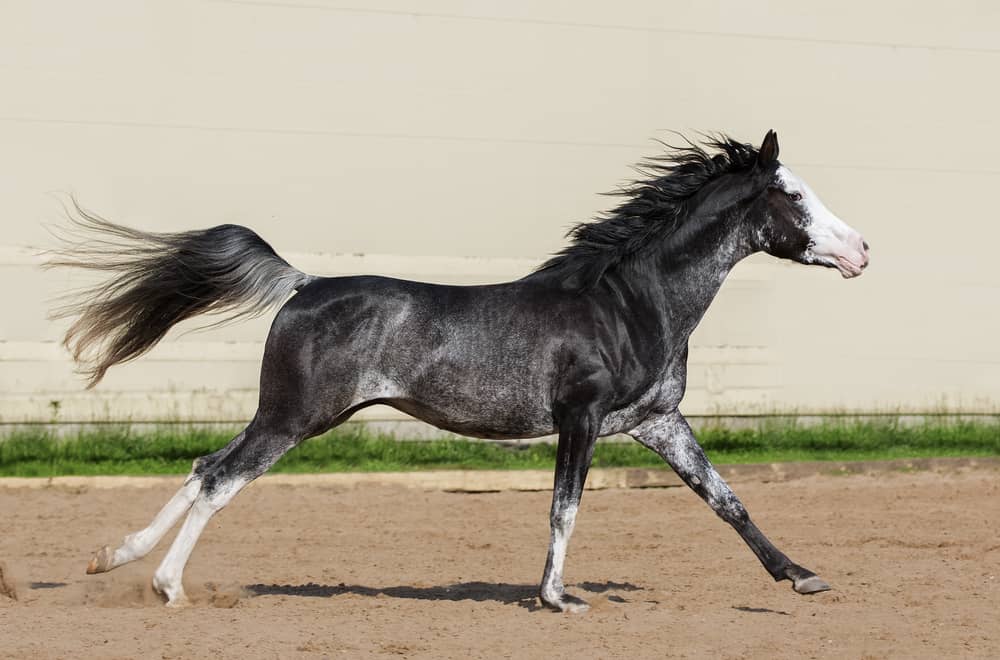 Rabicano is a type of roaning coloration that differs from true roan in that, although in certain areas, white hairs are mixed with colored hairs, the pattern isn’t uniform over the whole of the horse’s body.

With rabicano horses, the patterning tends to be most marked around the base of the tail and can also create a striped pattern over the horse’s ribcage. 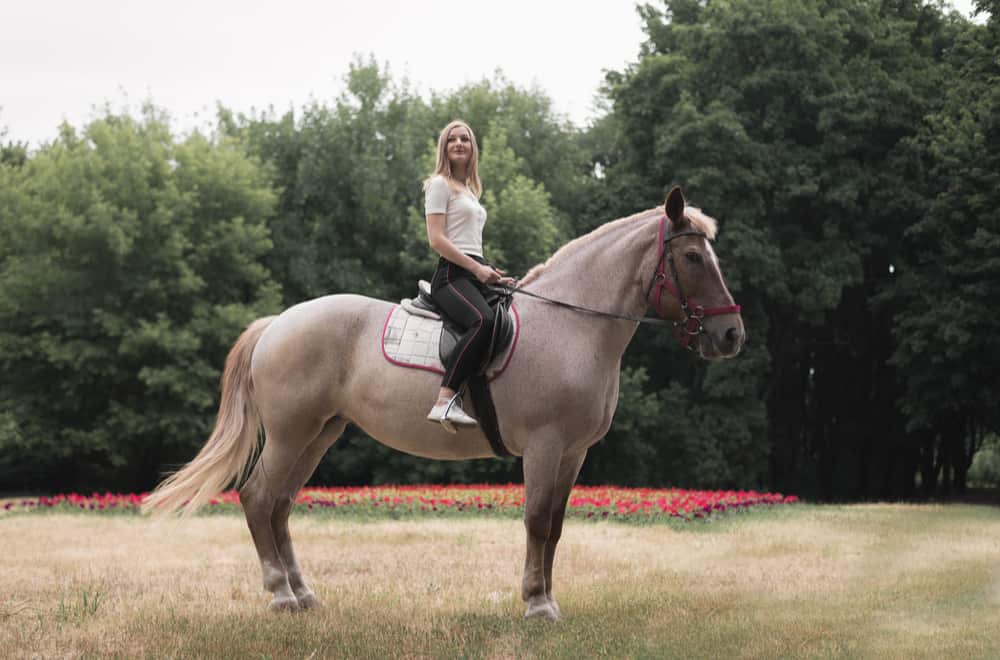 Sabino is the word used to describe a pattern of white spots in a horse’s coat. These white spots can sometimes display a mixture of white and colored hairs, but the pattern is only found where the spots are and not over the whole body of the horse. 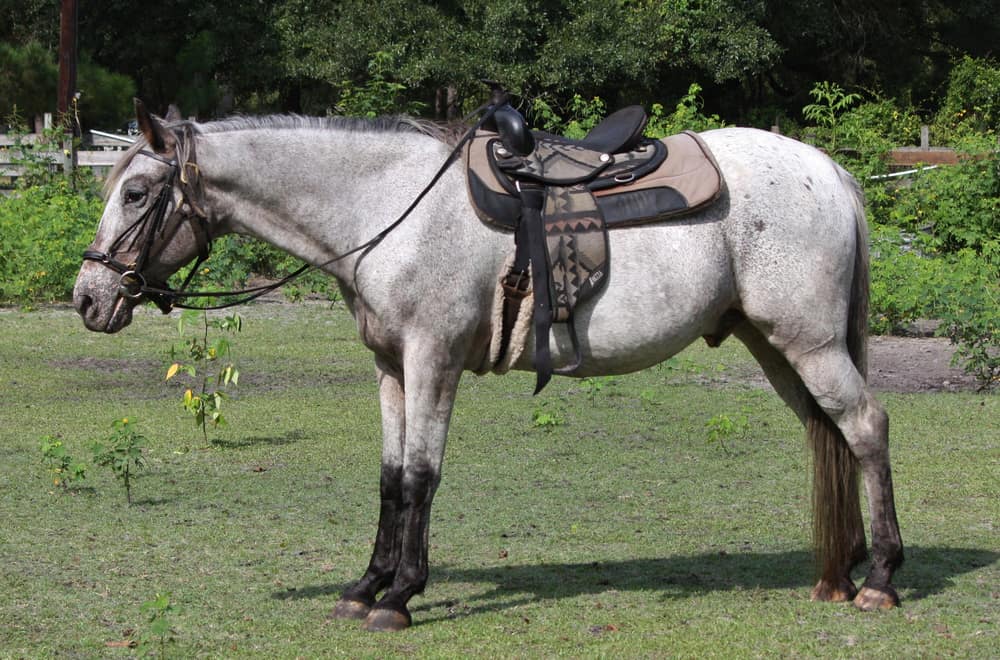 Varnish roan is a type of leopard complex pattern, and it can sometimes be mistaken for true roan.

Like true roan, this coat type is defined as an all-over mix of colored and white hairs, but genetically, it is not the same as true roan.

To tell the difference, look for what are known as “varnish marks”, darker patches with less white hair that appear in areas close to the bone. These varnish marks never appear in true roans. Also, varnish roans lack the tell-tale inverted “V” of true roans.

Blue roan is among the most distinctive and attractive of coat colors, and it can occur in many different breeds of horse. Although there are several other coat types that look similar, when you know how to identify it, you shouldn’t have any problem spotting a true blue roan horse.