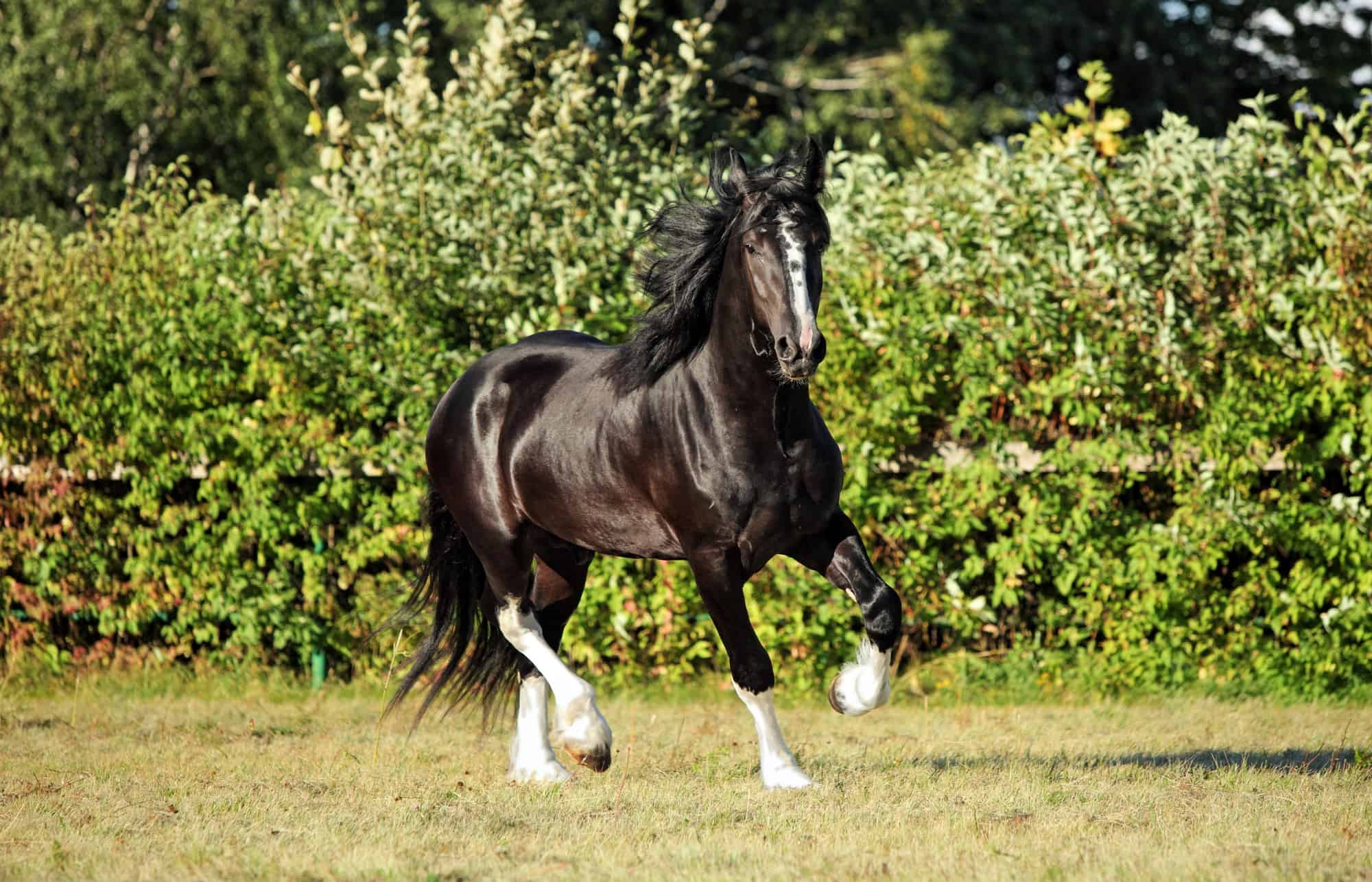 For centuries, large horses have been bred to help humans with all types of jobs. From pulling chariots to riding in parades and racing in competitions, these noble creatures have been of great usefulness to mankind.

In this post, we will explore some of the largest horse breeds in the world, their history, as well as the characteristics that make them stand out. But before that, let’s learn a thing or two about a horse’s size, shall we? 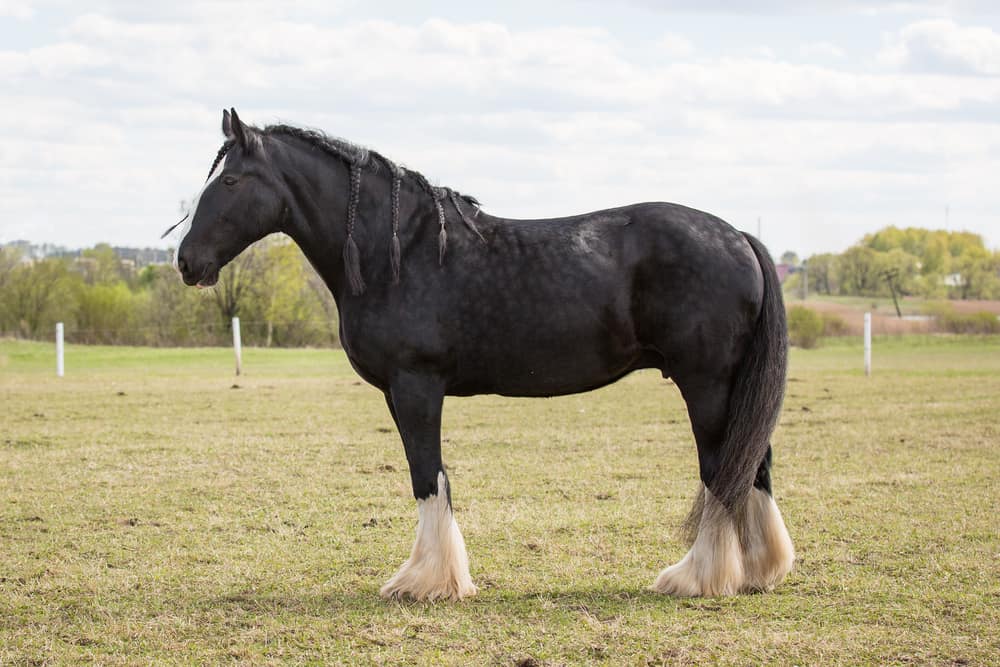 The Shire is currently the largest horse breed in the world, and it’s known for its tall, muscular build and feathered legs. It is also one of the horses with an easy-going temperament.

This breed is typically bay, grey, black, brown, or chestnut. It has an interesting history, the most notable being pulling giant carts of ale from breweries to homes. But it has served many other purposes including farming, riding, and fighting at battlefields.

Even in modern times, farmers with small farms are finding this breed of horses a better eco-friendly alternative to tractors.

Perhaps one of the reasons Shire horses are used to perform heavy tasks is that they historically rank among the strongest breeds. In the 1920s two Shires are said to have transported a load weighing more than 40 tons!

However, due to the ever-increasing mechanization of transportation equipment, people have turned to the more modernized means of carriage, which has resulted in the number of Shire horses decreasing significantly.

But thanks to organizations like the American Shire Horse Association, there is hope for this almost extinct breed of horses. Due to their effort, Shire horses are slowly starting to make a comeback. 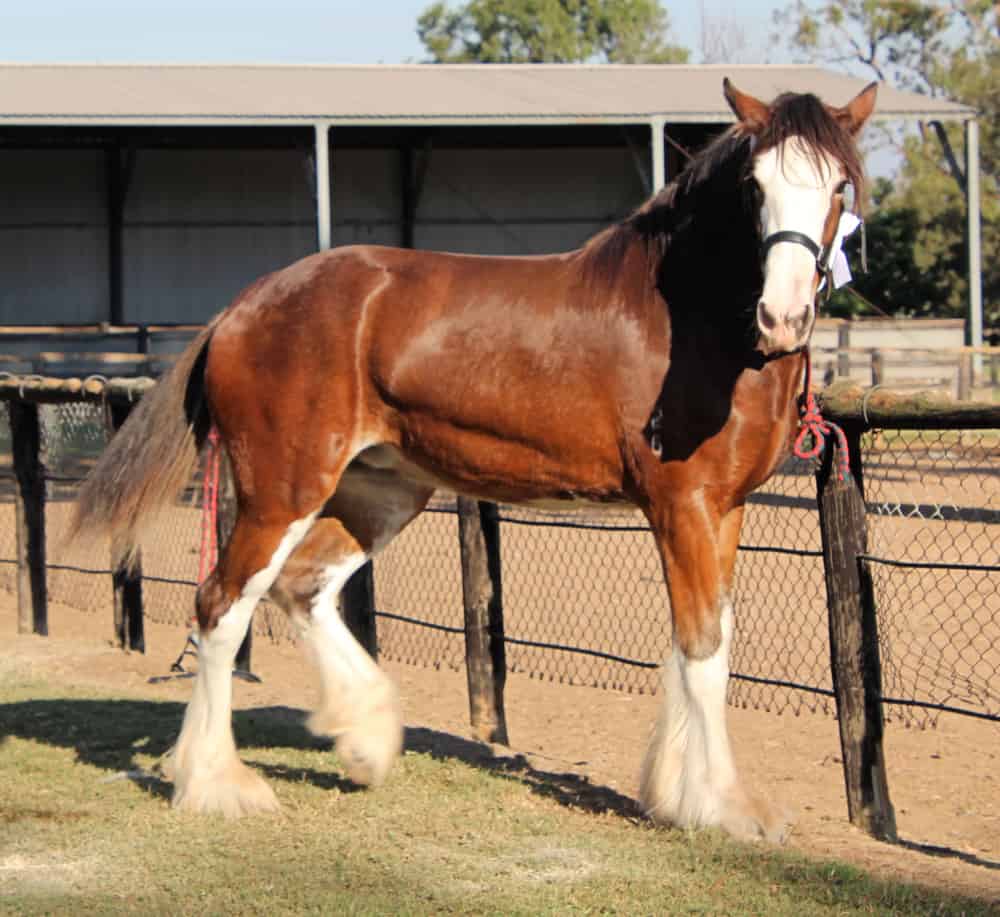 Clydesdale is slightly smaller than the Shire and is noted for its high stepping gait. Most Clydesdales have a bay coat with white markings on the feet, legs, and face. Some horses even have markings under the belly. A Clydesdale can also be black, grey, or chestnut in color.

This breed of horse is gentle yet energetic and is favored for its high trainability and easygoing nature. Some of the notable characteristics include silky feathery legs, a broad forehead, and a long arched neck.

Owing to their gentle and energetic nature, these beautiful creatures are used on farms and other areas requiring their abilities. In addition, due to their flashy appearance characterized by the white, feathered hooves, these horses are also used for shows and parades. 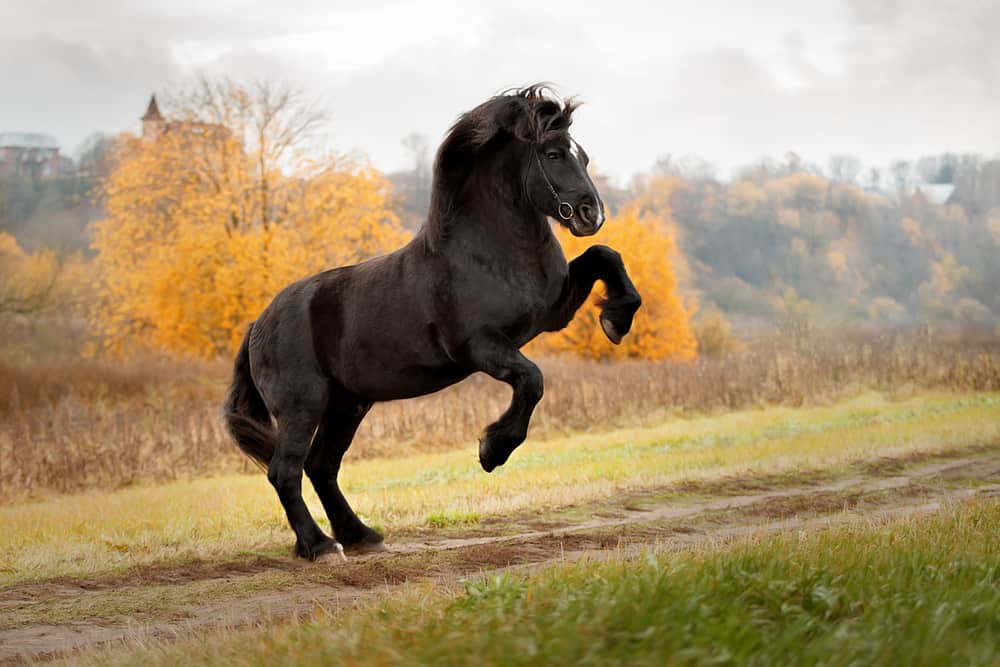 Did you know Percheron horses were once considered the tallest in the world? That’s right! Original Percherons could even go up to 19 hands in height.

The crossbreeding of Percherons with lighter horses like the Arabian, however, had a significant influence on the size and strength of these horses. But there is also an upside to it; it also contributed to their elegant appearance.

Today, Percherons are used in parades, riding, horse shows, and many other equine activities. They are also some of the most intercrossed, especially when the breeding involves a larger horse and a smaller one.

This breed of horse is best known for its hardiness, willingness to work, and ability to withstand severe climates.

Percherons are mostly black or gray. Their size, however, depends on the country they are bred. Those bred in France or the USA, for instance, tend to be bigger than similar breeds in Great Britain. 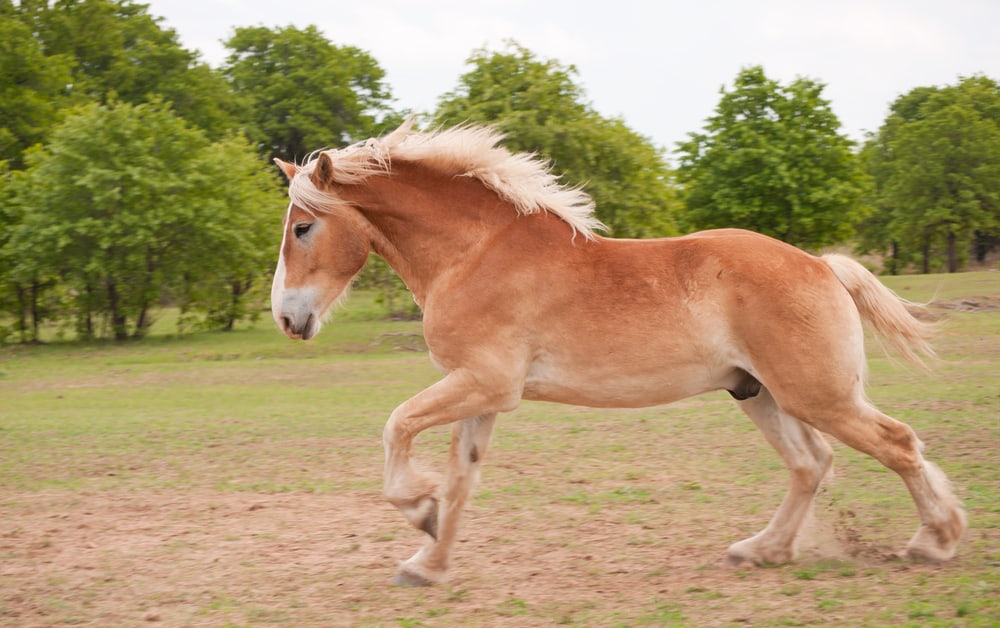 Originally known as the Flanders Horse, The Belgian Draft horse is one of the horses historically used for farming. Today, the horse is still used in agriculture work and cart pulling as well as in shows and riding circles.

Even though Belgian Drafts have feathered hooves like the Shires and Clydesdales, they do not boast a long, elegant neck as these two breeds do; their neck is short and muscular. And most of them are typically bay, roan, sorrel, or chestnut in color.

Belgian Drafts are generally shorter than many of the horses considered larger breeds but we still have some that have been found to grow as huge as the Shire. The most famous giant Belgian was the Brooklyn Supreme that stood up to 19 hands tall and weighed more than 3, 000 pounds. 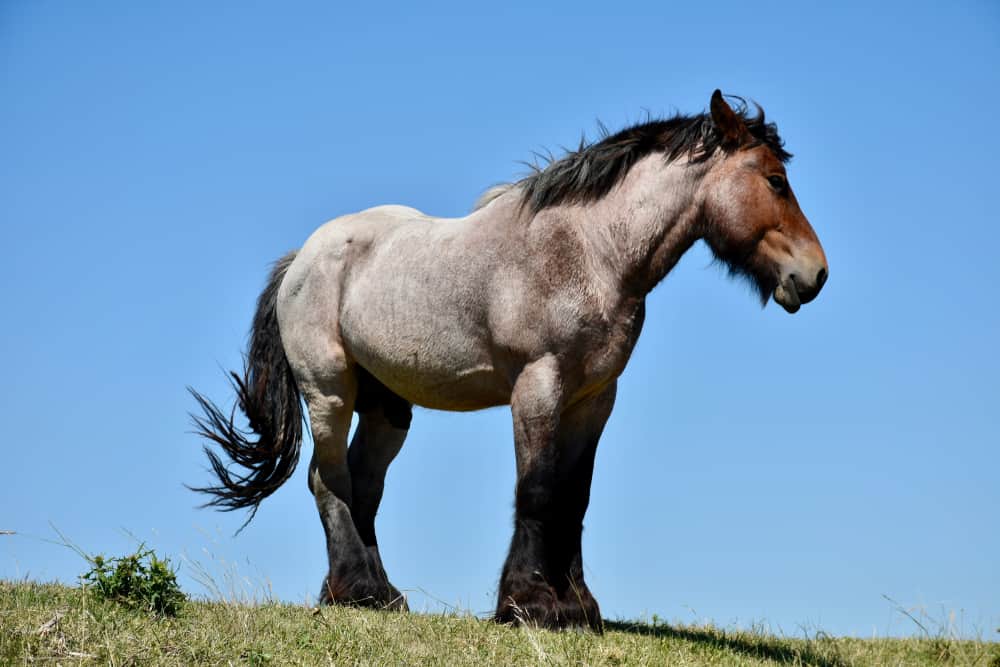 Dutch Draft is one of the rarest breeds of horse, but still ranks among the largest horses ever known. It is a crossbreed of the Belgian Draft and the Ardennes, and one of the most popular in ancient equine activities.

Over the years, Dutch Drafts have excelled at farm work, where they have been used to pull incredibly heavy loads for extended periods of time. They are very intelligent and have a relatively calm demeanor.  These horses are also known to walk slower than other draft breeds.

Most Dutch Drafts have a bay, grey, or Chestnut coat. They also have a straight head, short legs, a wide neck, and an overall muscular body. Plus they have those beautiful feathered hooves borrowed from their Belgium ancestors.

As the name hints, the Suffolk Punch originated from Suffolk, England a place known as home to draft horses since the 1500s. It is Great Britain’s oldest native breed of horse, primarily bred for farm work.

The number of Suffolk horses significantly reduced in the late 1940s and almost became extinct in the 1950s. This downward curve has continued over the years and today there are only a few of these horses left, with their status considered critical by the American Livestock Breeds Conservatory.

Suffolk Punch horses are always chestnut in color. Some have white markings on the legs and face but are very rare. The legs are short and muscular, with dense bone. Generally, the horse has a rounded appearance, hence its name, the “Suffolk Punch”.

Intelligence, docile nature, and the willingness to work as some of the major attributes of Suffolk. Also, the breed requires relatively little food than other draft horses, which makes it easier to domesticate. 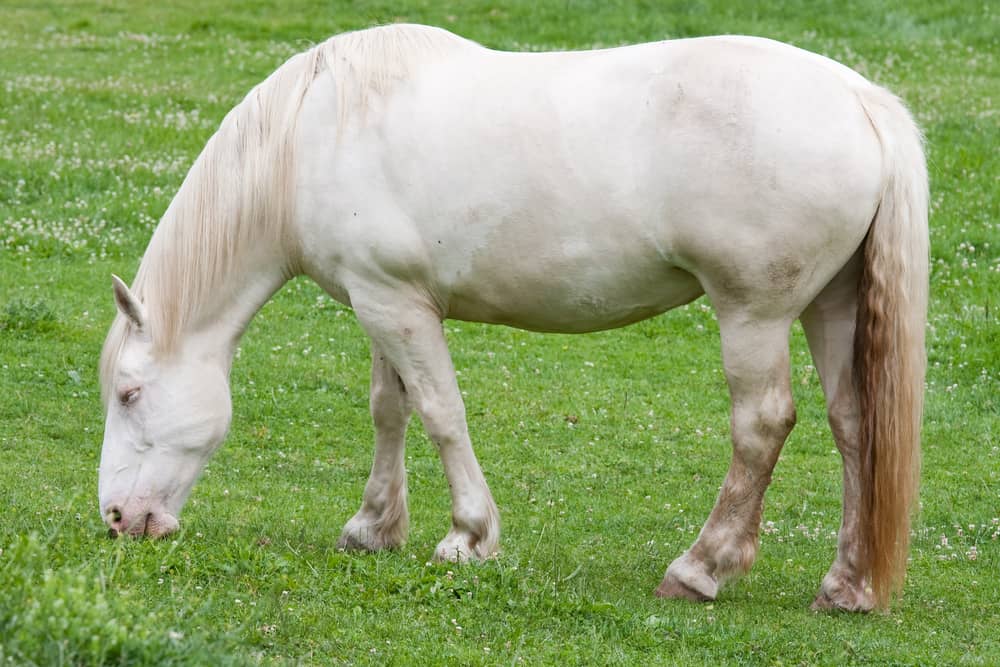 The American Cream Draft is the only historic draft bred in the US still in existence. It has an appealing cream coat, beautiful amber eyes, and a brilliant white mane and tail. Some breeds have white markings.

This horse has the typical draft configuration, with a wide chest, short, strong back, and properly muscled hindquarters. It is mostly used for driving, shows, riding, and farm work.

As with Suffolk Punch, the American Cream Draft is considered a critical breed. The number of registered breeds, however, has increased over the years, but it’s still not at a point of being considered safe.

Known for its strength, hardiness, and moderate temperament, Australian Draught was historically used for draught work. In modern times, however, this horse is used for shows, riding, and farm work.

As a result of the multiple horse breeds used in coming up with this breed, the coat can be of different colors including white, black, gray, roan, and brown. The blood of the Belgian Draft was also added to the breed more recently, which has resulted in more colors and traits within the breed.

Also known as the White Marble, Boulonnais is the most elegant of all drafts. It is one of the breeds that have been around for some time, with its origin dating back to the times there were no crusades.

Some experts argue that you can trace this breed back to the horses that the calvary of Julius Caesar left behind before invading England.

Over the years, Boulonnais horses have been crossed with other breeds like the Arabian, Andalusian, and Spanish Barb to refine them, and the resulting breeds have further been intercrossed to create other draft horses.

Boulonnais horses are typically gray in color, but modern breeds sometimes have a black or chestnut coat. Their head is short and distinctive, with a wide forehead and small, erect ears. The neck is thick, muscular, and gracefully arched and the legs are solid and strong with clean joints.

Despite their large size, these horses are easy to work with. They are social, active, and energetic, which makes them wonderful companions. 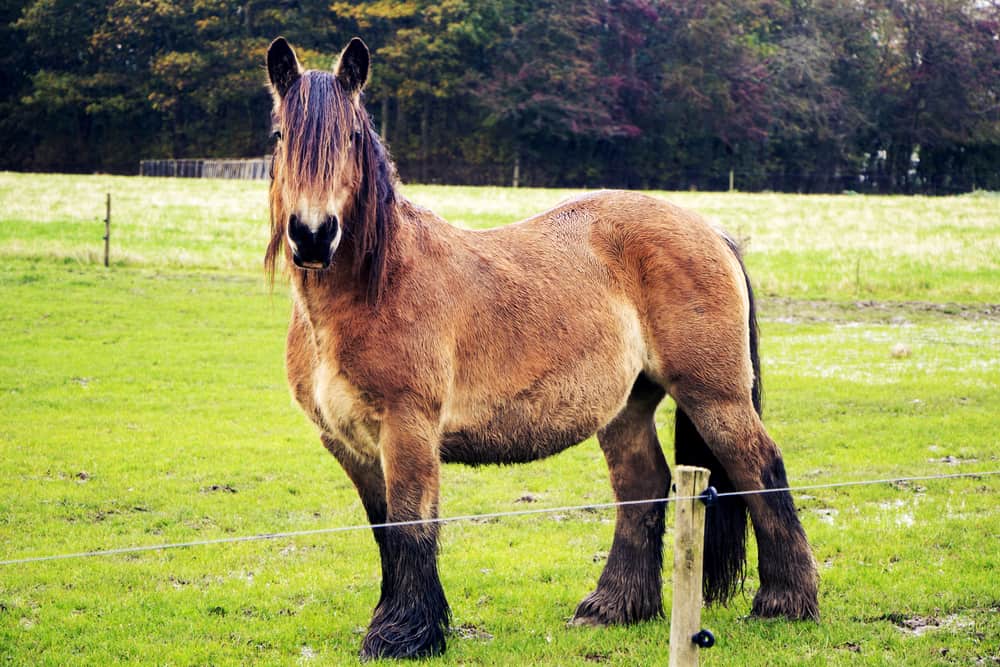 Jutland got its name from the famous Jutland Peninsula and is one of the most popular horse breeds in shows, films, and festivals. It is calm, gentle, docile, and energetic, which makes it easier for humans to domesticate and work with.

Most of the horses are chestnut-colored but there are some that come in other colors like bay, black, gray, or roan. Some may even have white markings on legs and face.

In addition to these distinctive colors, Jutlands have other unique physical characteristics like convex face profile, low and flat withers, short and arched neck, wide chest, straight shoulders, and short, muscular back.

They are believed to be a descendant of the Fredriksborg horse and some of the ancient breeds used to develop the Suffolk Punch. Modern breeds, however, have been developed with Suffolk Punch and Ardennes.

How to Determine a Horse Size

The largest horses are usually the tallest. This means you need to know how the height of a horse is measured in order to figure out whether the horse falls in the category of large breeds or not.

Horses are measured in hands, often abbreviated as “hh” or “h”. Statistically, one male adult’s hand is equal to four inches.

So, if someone tells you a horse is 16.4, for instance, it means that the horse is 16 hands and 4 inches. The largest horse breeds will typically measure between 16.2hh and 19hh in height.

In the olden days, the height of a horse was measured using the actual hands. One would place one hand next to the equine’s hoof on the ground and the second hand above it, then remove the first hand from the initial position and place it over the second and keep doing this over and over until the last hand is rested on the horse’s wither.

But over the years, things have changed and many different instruments have been devised to measure the height of a horse faster and more accurately, the most effective being a horse measuring stick.

Simply hold the stick perpendicular to the floor next to the horse and even it with the highest point of its withers. Note down your measurement. If you are using a tool that only measures in inches, divide the reading by 4.

Here is a short video that explains, in detail, how to measure a horse’s height.

Have you interacted with any of these horses? Is there a breed you love more than the other? Tell us in the comments.

2 thoughts on “10 Largest Horse Breeds In the World”