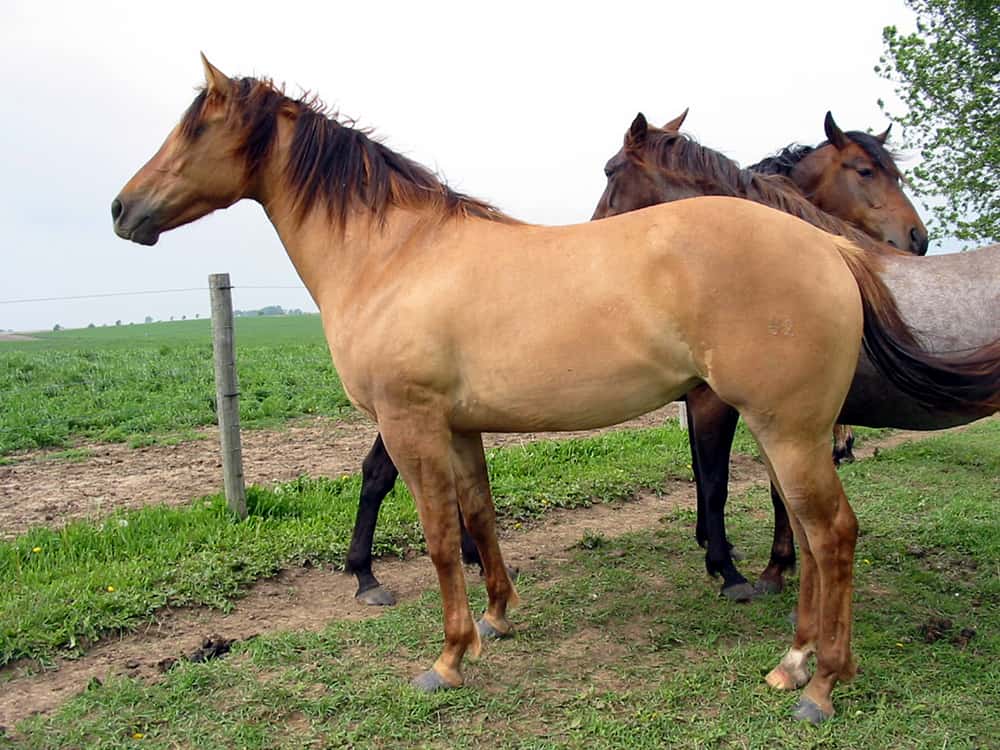 Horses are majestic creatures and are loved by people worldwide. These animals have demonstrated resilience, empathy, and great insight throughout many of history’s most significant feats.

For this reason, horses have a special connection to people and cultures worldwide and esteem meanings such as spirit, endurance, courage, and beauty.

In terms of beauty, there are a variety of colors, patterns, and other distinct

markings that you may find amongst the horse community. This article aims to point out the differences between dun and buckskin horses.

A unique set of vocabulary describes the various colors found on a horse. It is interesting to note that the color coat begins with either a red or black base pigment at the genetic level.

From the red or black base, gene modifiers extend or dilute the base pigments into a beautiful array of coat colors. Some examples of the new color variations include bay, sorrel, palomino, chestnut, dapple grey, roan, appaloosa, dun, and buckskin.

The most common colored dun horse looks similar to a buckskin; therefore, people often confuse the two. While the colors may appear similar to the untrained eye, the two types of horses are more easily distinguishable by their unique set of patterns and markings.

Watch this short video to see one horse owner explain the key differences between the two.

All About Dun Horses

The classic dun horse’s coat color ranges from a creamy yellow to reddish gold, and it is this horse, otherwise known as a bay dun, that people often confuse with a buckskin.

Upon closer visual inspection, if you notice a clear and distinct stripe that runs down the back of the horse from its mane to the dock of its tail, then it is undoubtedly a dun.

Besides the dorsal stripe, a dun horse is best known for its zebra markings on its upper legs. While these leg markings can vary in intensity, they appear above the knees and hocks, the “evolutionary equivalent to the human ankle.”

A dun horse will often exhibit a shoulder stripe that runs perpendicular to its dorsal line, similar to the cross associated with a donkey. When checking for the shoulder stripe, look past the withers and up to the horse’s mane.

You may notice light-colored hairs on either side of the horse’s mane. This artistically shaded hair coloring, known as frosting, may appear along the mane and the tail of the dun horse.

In addition, you may look up to the ear tips of a dun horse, and you should notice darkened marks that compliment the base color distinguished in the horse’s dorsal stripe.

Genetically speaking, a dun horse’s base coat may become lighter; however, its primitive markings such as the dorsal stripe, zebra markings, shoulder stripe, tail, mane, and ear tips will remain unaffected.

Dun-specific markings may not necessarily be reliable when looking at a foal because the markings may disappear once the foal’s coat sheds. Owners of gray foals tend to misidentify their horses as duns because of this factor.

Though the common dun is tan-colored with blackened points, there are many variations to dun coloring. The dun gene affects both the red and black base coats of the horse.

I found it particularly interesting how mother nature is always looking out for its creation. Researchers believe that the dun gene existed long before humans began to domesticate horses and that its pattern was especially prevalent in ancient wild horses serving to camouflage against predators.

All About Buckskin Horses 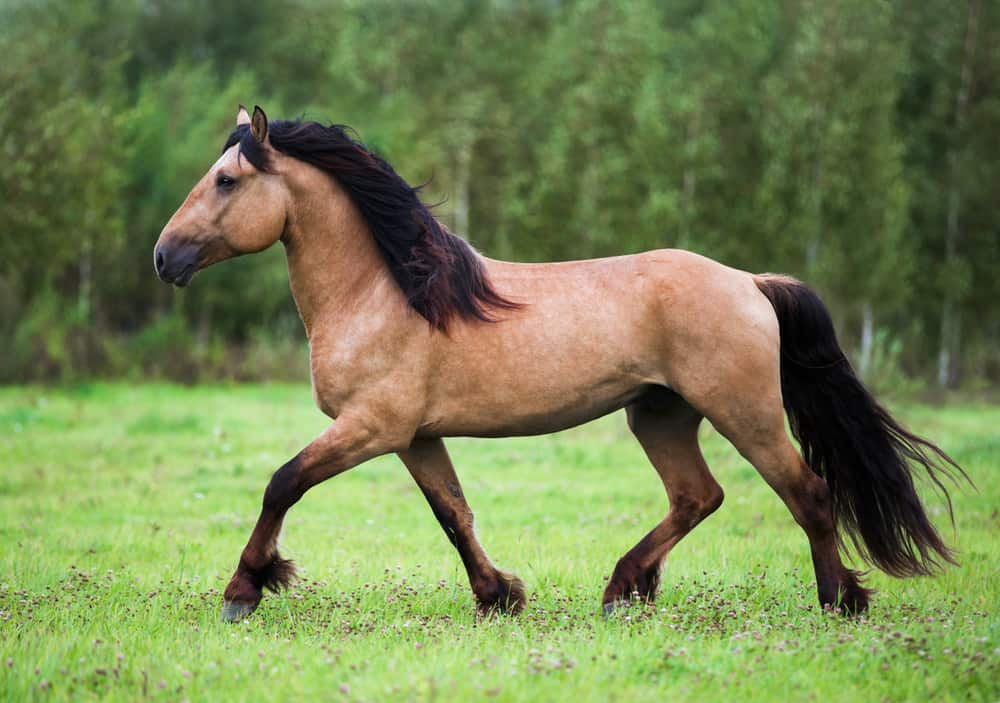 The ideal color of a buckskin horse is similar to a buck or male deer, and for that reason, it carries the name. True buckskins also have contrasting black points on specific parts of their bodies.

The buckskin horse has various color variations but is typically distinguishable by its goldish color, with shades ranging from light to muddled.

Scientifically, a single copy of a cream dilution gene is responsible for lightening the horse’s base pigment to a tan while not affecting the prominent black points which exist.

Usually, genetic changes for breeding purposes require a pair of alleles, but the buckskin horse is an exception. Since the genetic makeup of a buckskin horse requires only one dilution allele, people often register them as a color breed.

Still, because of its randomness, it cannot be recognized as a complete pedigree. Even if a buckskin mates with another buckskin, there is no certainty that the foal will be a buckskin.

According to HelpfulHorseHints, “following recessive and dominant trait math, two buckskin parents have a 25% chance of producing a base color foal (bay, chestnut or black), a 25% chance of a double cream dilute foal (cremello, cream or perlino) and a 50% chance of some type of single dilute foal, though not necessarily a buckskin (buckskin, palomino or even smoky black).”

Again, I would like to repeat that the standard color for a buckskin horse should resemble a tanned buck’s hide. Additionally, this horse will embellish black points to its mane, tail, and leg.

Like a dun horse, a frosting effect may be visible amidst the tail of a buckskin horse, but its contrasting black points are the most notable. The

“agouti gene” restricts the black pigment to those specific parts of the horse’s body.

To be sure of the difference between a dun and buckskin horse, horse owners have the opportunity to request an equine coat color test that usually costs no more than $150 for a full color and pattern panel.

Horse enthusiasts trace the earliest buckskin horses to Spain. Therefore, these golden horses came to America by way of early Spaniard explorers. Despite the history of these animals, specific registries will not accept buckskin as a recognizable color. 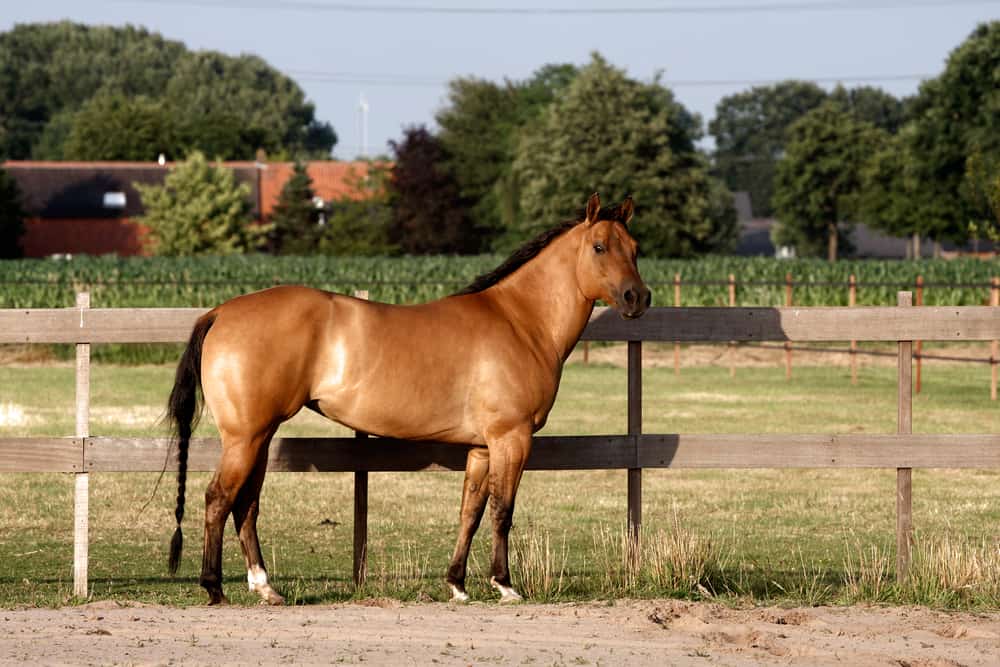 Horse genetics is a complicated study because you will find out that things are not always what they appear. For example, even some of the primitive markings that we have discussed may be present in horses not of that genetic formation.

Sometimes, a horse may appear to exhibit countershading that can even confuse an equestrian expert. Even though countershading occurs on the horse’s back, the skin underneath appears lighter than the surface.

Though countershading can be confused with a dorsal stripe, if it is not crisp or does not extend to the dock of its tail, the horse is not a dun. You can also distinguish this feature as a non-dun factor if the countershading fades during the summer months.

Although you can check for some of the distinct markings on your horse and make an educated guess about your horse’s breed and pedigree, the only real way to know whether your horse is a dun or buckskin is by having its DNA tested by an equestrian lab. 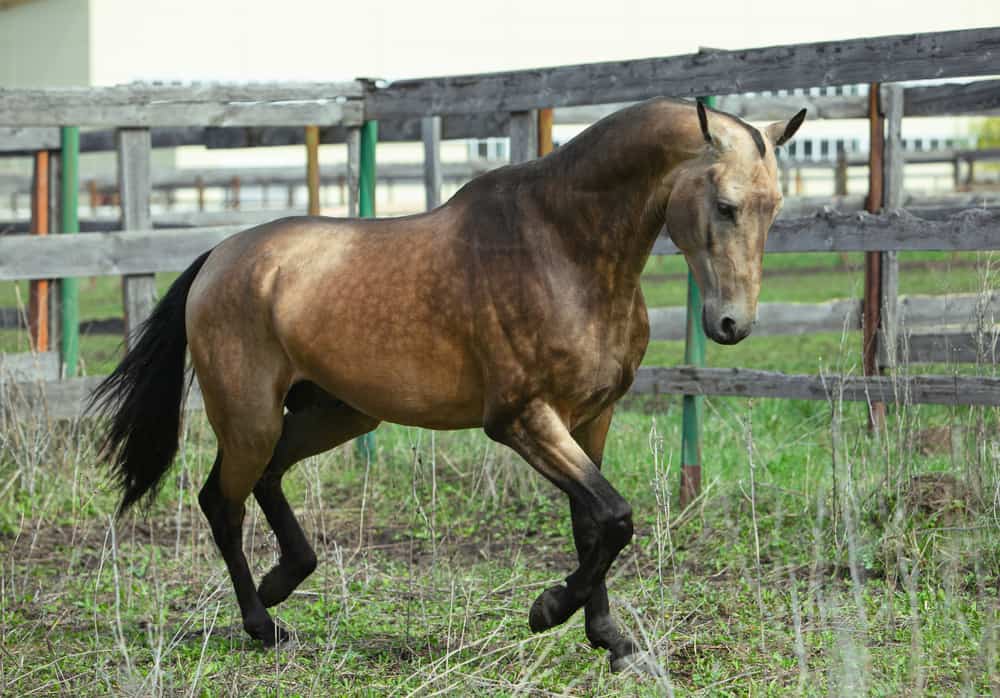 A popular question circling the internet is What kind of horse is Spirit? For those unfamiliar with the DreamWorks animation, “Spirit” is an animated adventure family film that follows a courageous horse traveling through the American frontier.

Last year, the real-life inspiration for the movie’s main character had his 25th birthday in California, where he resides. He is a Kiger Mustang whose roots trace to the true home of these magnificent animals in Oregon.

The Kiger Mustangs may be the “last remaining wild horse to still retain Spanish roots.” But let us be clear that the Kiger Mustang refers to the horse’s pedigree.

As far as Spirit’s color is concerned, he exhibits dark points on its mane, tail, and legs. However, because he also has a back stripe, he may be more appropriately referred to as a dunskin.

Both the dun and the buckskin horse have beautiful coats and can be found genetically in several breeds of horses. So neither are at risk for going anywhere any time soon, genetically speaking.

Wild horses such as “the Przewalski’s horses, Tarpan, and Konik are predominately duns.” On the other hand, buckskin is common in breeds, including “the American Quarter Horse, the Andalusian, Morgan, Tennessee Walking Horse, and many pony breeds.”

For some pure breeds such as the Arabian, Friesian, Suffolk Punch, and the Cleveland Bay horse, the buckskin coloring is an impossibility because they lack one gene or another prerequisite for the deer hide color.

As a horse owner, but even more so as a breeder, the genetics behind your horse’s coloring is something you will want to know. Although this article offers an elementary understanding of the significant differences between a dun and buckskin horse, you may wish to have scientific clarification before deciding on a horse.

Please feel free to share your questions or experiences with owning or breeding dun or buckskin horses in the comment section below.