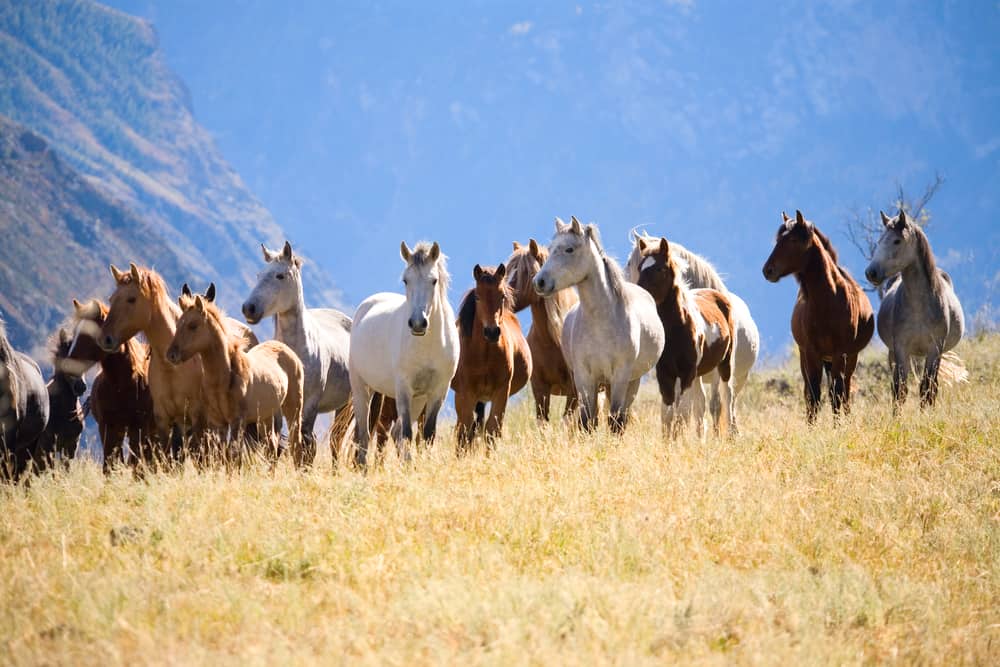 Most of us think horses are for the rich and famous. After all, they cost $3,000 to $5,000 at the time of writing. But while maintaining them is expensive, you can buy one for less than $1,000. What’s more, if you live in the right part of the world, wild horses are as common as coyotes, deer, or raccoons. You could technically catch one for free if you have permission.

In America, these semi-wild horse populations are called mustangs. They’re described as feral rather than fully wild because their DNA contains domesticated horse strains, so they can be broken if you have the skill and patience. Similar horse herds roam the Australian Outback, but while we call them mustangs in America, they call them brumbies in Australia.

It’s hard to map the exact type and breed of feral horses. They mingle and mate in the wild so their gene pool is quite broad. And sometimes lost, stolen, or runaway horses join these herds and add to their DNA. That said, you can class mustangs into nine broad categories while brumbies are sub-divided into another six groups. Let’s look at these 15 types in detail.

American mustangs draw their DNA from South American and Native American breeds. Many of these horses went extinct naturally, but horses imported from Spain and Europe helped to generate new feral herds after the 15th Century. These mustangs come in various colors with distinct markings. Below are the nine recognized types of mustangs in the USA.

Some mustangs are classified by the reserve they live in. These include BLM (Bureau of Land Management), Forest Service, Comstock/Virginia Range, Badlands, and Salt River mustangs.  These horses are raised on government land, broken in, and sometimes offered to the public for adoption. They include lots of breeds and have brands on the left side of their neck.

Horses can be hot-bloods (quick, spirited, racehorses), cold-bloods (heavy, thickset workhorses), or warm-bloods (mixed). Mustangs often have bits of all three because they choose their own mates in the wild. Due to climatic adaptations, they’re smaller than their European ancestors. We’ll rely on the genetic traits from their original equine stock to categorize them. 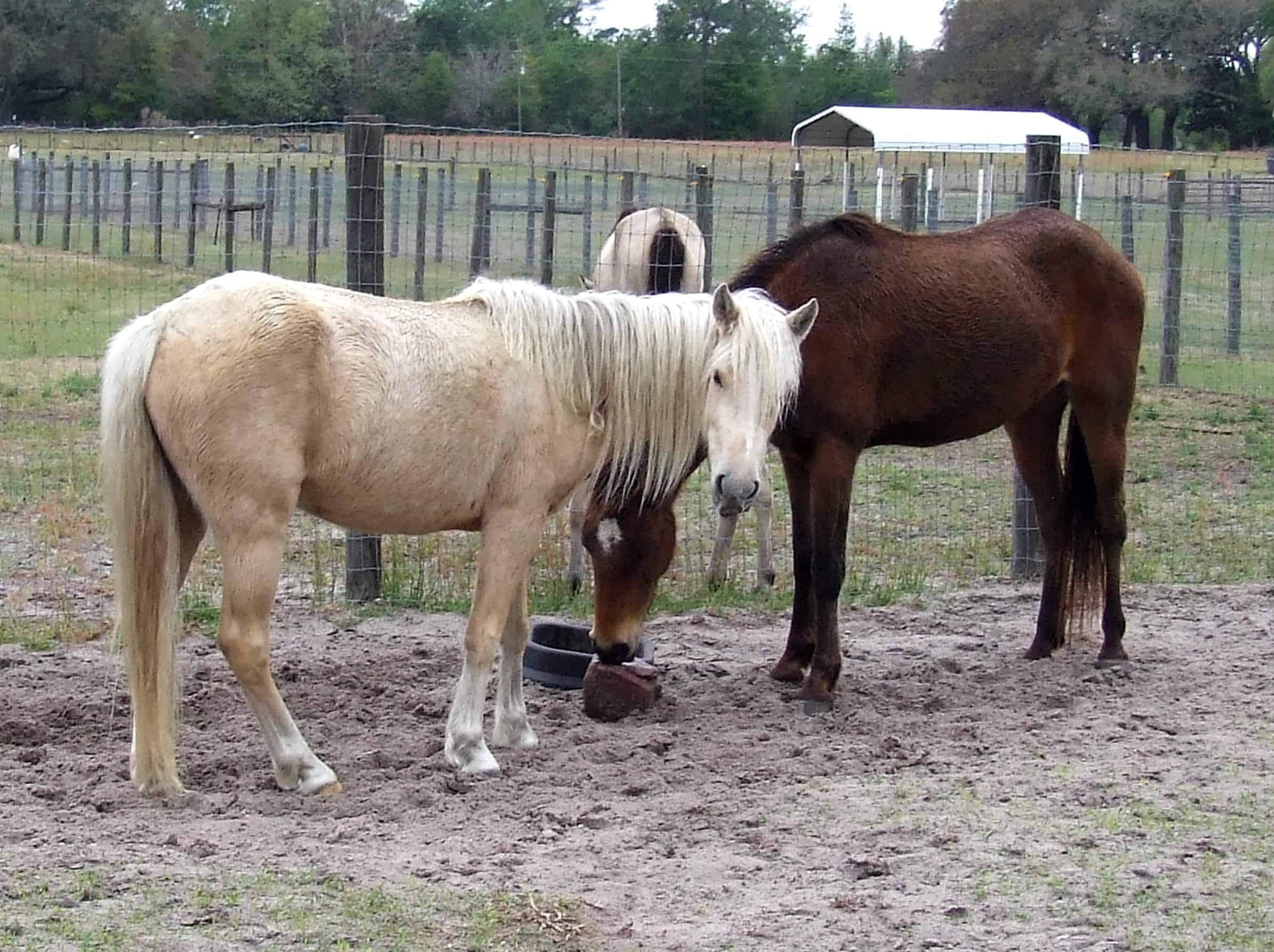 These are the ‘mother breed’ that started it all. Conquistadors brought them over on ships and only the toughest survived. But as these conquerors went home, they left tons of horses behind, and the abandoned ones grew into a massive feral population. Cerbat, Spanish, Kiger, and Sulphur Springs all descend from Colonials, the State Horse of North Carolina. 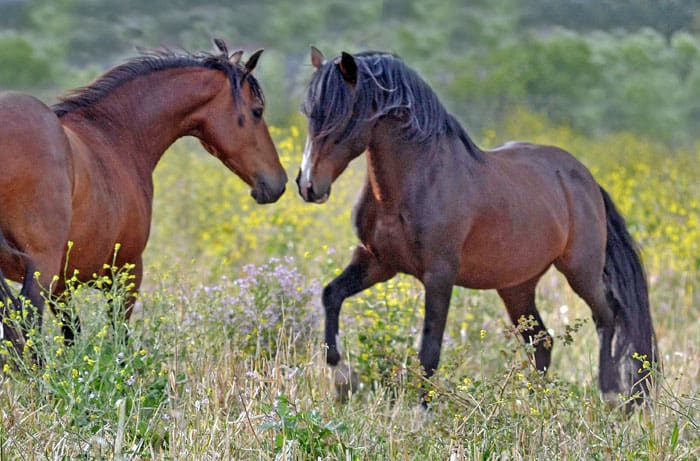 Cerbats are roan, chestnut, or bay and often have a blaze marking and white legs. Their ancestors were about 13.2hh but contemporary Cerbats can get to 14 or 15hh (that’s roughly 60” or 150cm). They’re calm, quiet, mountain horses known for their ambling gait. These Arizona mustangs are darker at birth then they ‘roan out’ meaning they get lighter with age. 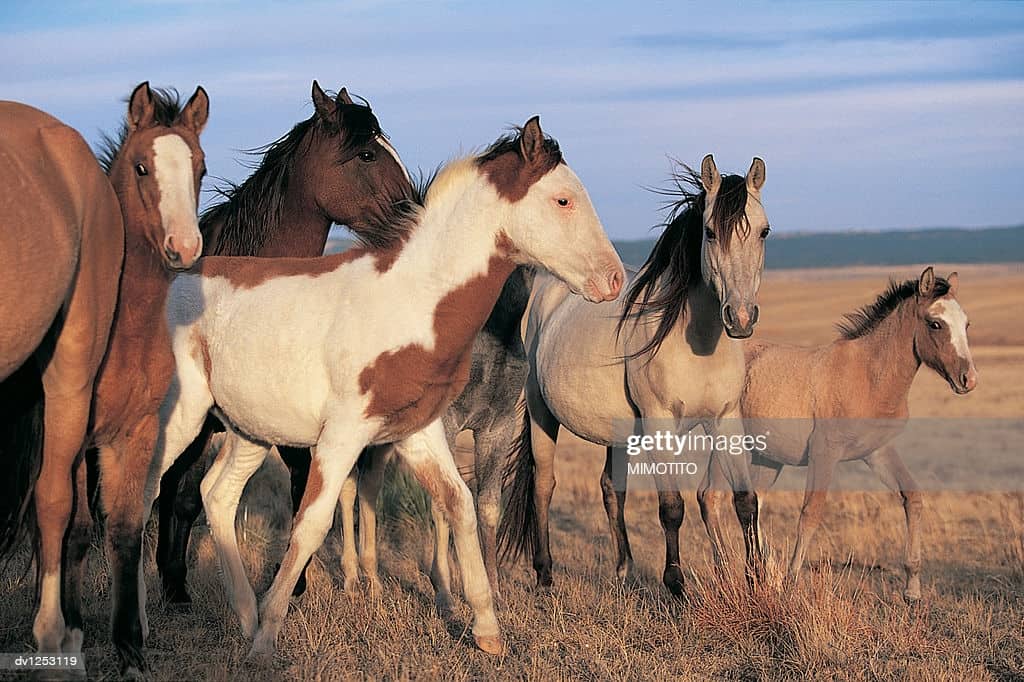 The initial Colonial Spanish horses were mingled with Spanish Barb horses to generate Spanish mustangs. Spanish Barbs can be traced to Iberian and North African horse breeds. As a result, Spanish mustangs combine the even temperament of Colonials with those exotic roots from the cold north. They have big ears, a small body, a slim chest, and are easy to ride. 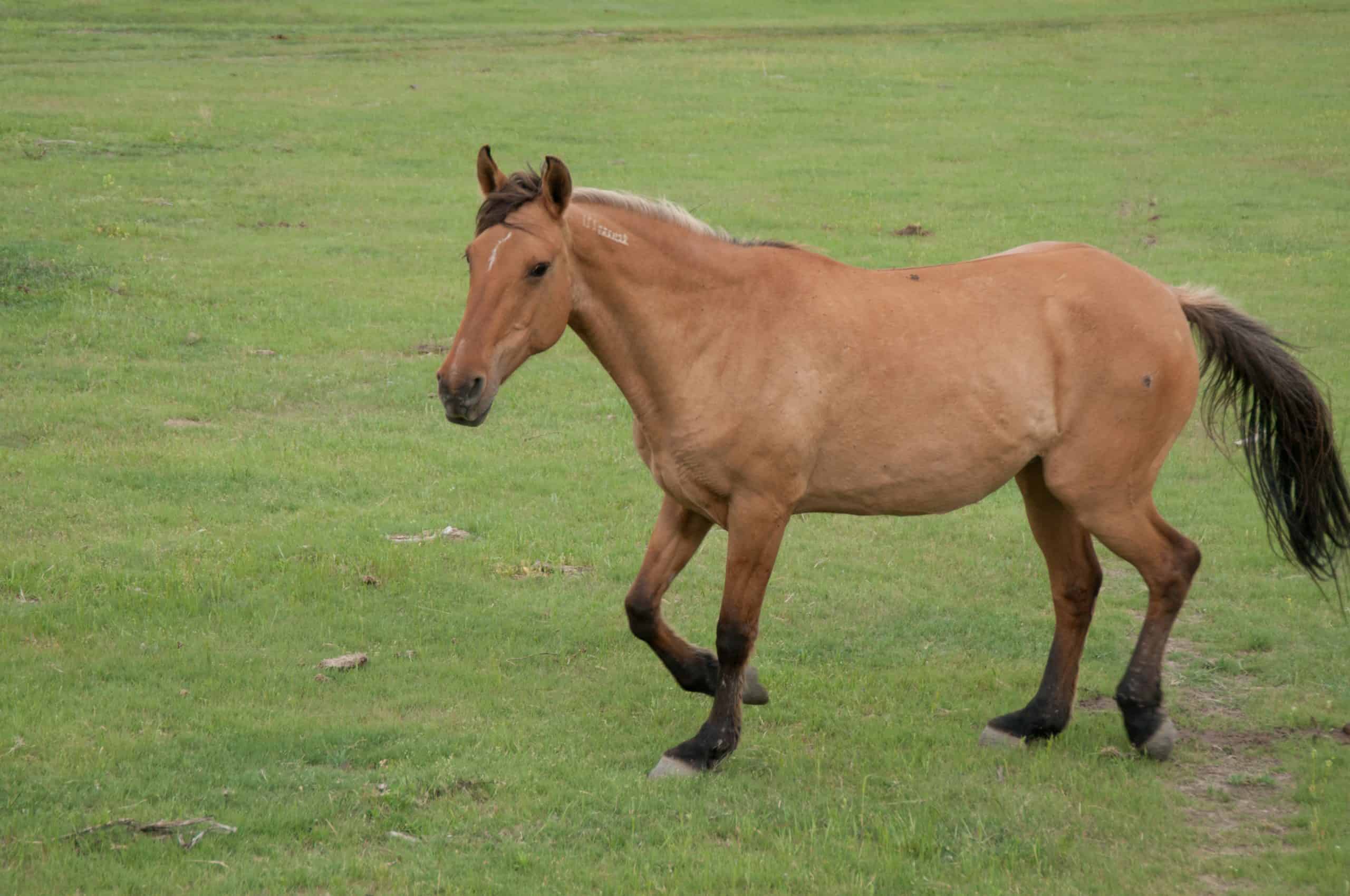 The Kiger region in South West Oregon has a distinct mustang population. These horses are a hybrid of Sorraia, Andalusian, and Barb horses. Their typical colors include dun, blonde, or cremello, and they sometimes have zebra-like stripes on their legs and bodies. Kigers are friendly and personable, so they’re easier to break. Most of the Kigers are managed by BLM. 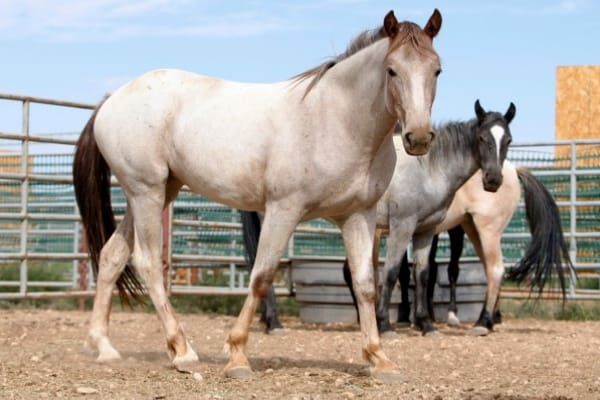 Under the microscope, Pryor Mountain mustangs bear the closest genetic resemblance to those first Spanish imports. But they’ve adapted to highland living so they have an athletic, graceful, high-kneed gait. They would make great show horses, but they’re skittish and tough to tame. Their style and endurance are legendary, and these rugged feral horses stand 14hh. 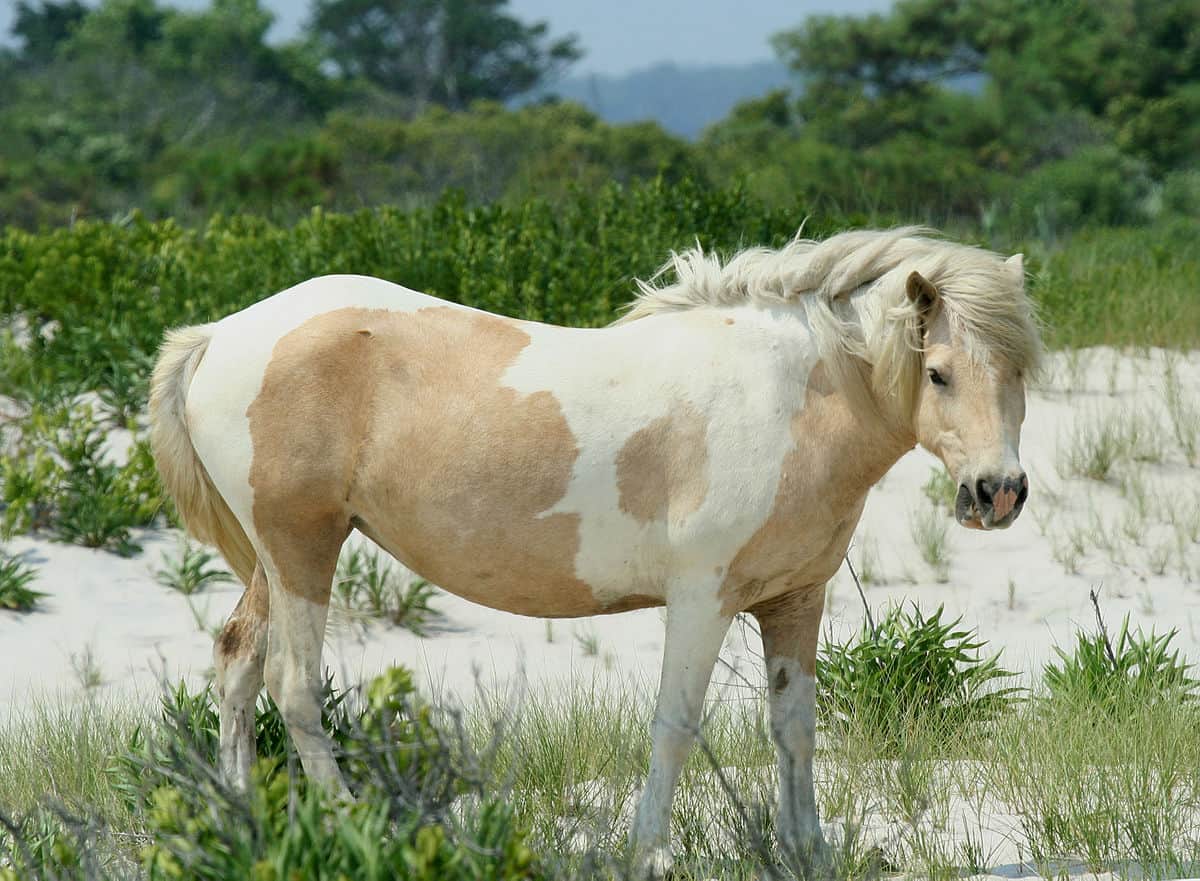 These pinto horses live on islands – Assateague, Chincoteague, and Shackleford. They’re not a specific breed but because they live on islands, they’re stronger swimmers than your typical landlubber horse. Rumour has it they arrived on the islands via shipwreck. These mustangs are looked after by the National Park Service and the Chincoteague Volunteer Fire Service. 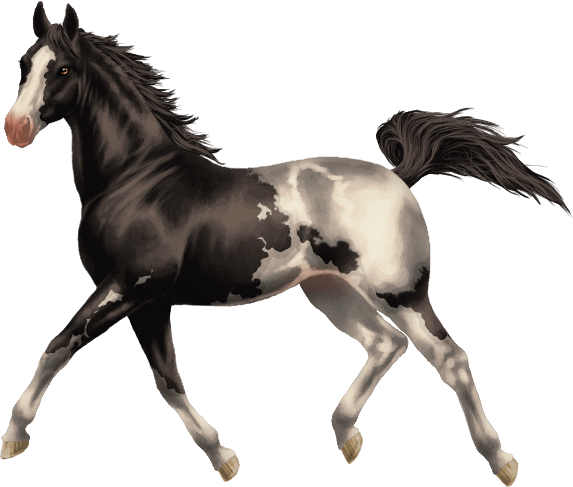 These mustangs came from Arabian racehorses. They have a distinctive ‘high tail’ and a concave profile, unlike most American ferals that have straight or convex figures. Their narrow muzzles and arched necks are thought to help their breathing by widening their sinuses. It’s why their long-distance endurance is unmatched. They stand at about 14hh. 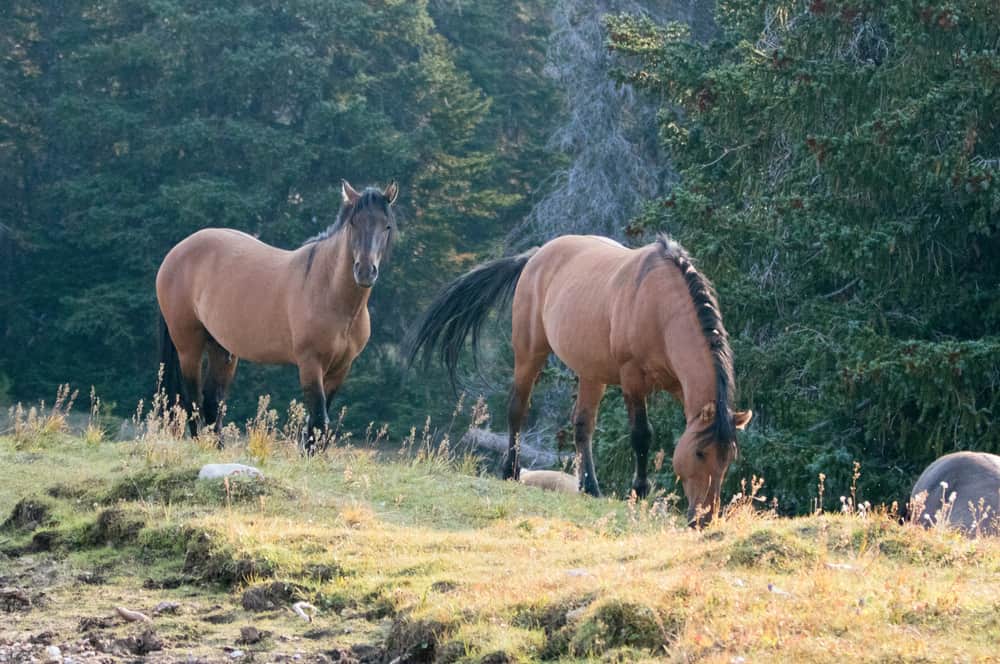 Coyote Canyon Mustangs are California natives but few of them exist there now. They were moved to protect them from forest fires and drought. They have dun, roan, or chestnut tones and their East County roots make them smaller than typical mustangs. They have blocky square bodies, and if you threaten them, they ring around the young or weak herd members. 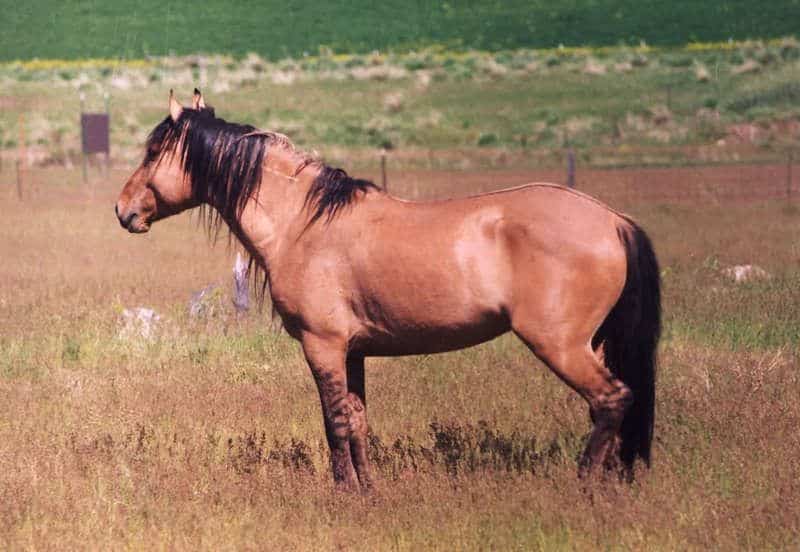 While Sulphur Springs mustangs have Spanish stock, their genes have adapted to their habitat. They live in Utah’s Needle Mountain and are commonly dun or grulla colored with stripes on their legs and dorsals. Dun and Grulla are ‘faded’ shades of brown and grey where the slightly striped body is lighter, creating a gradient towards their darker legs and mane.

The first westerners in Australia come from the UK, so brumbies rely heavily on British, Irish, English, and Welsh stock. They came in small groups and by 1800, there were barely 200 horses in the Australian colony. Some horses got lost, ran away, were freed, or left in abandoned settlements. They turned feral and bred, adapting to local weather conditions.

Most brumbies in Australia live up north, in the Australian Alps and around Queensland. They were workhorses and have echoes of their Commonwealth ancestry. But Australia is much warmer than the UK, so the horses shed their thick pelts and heavy stockings. A group of brumbies is called a mob or band. Let’s look at the six most common types of brumbies. 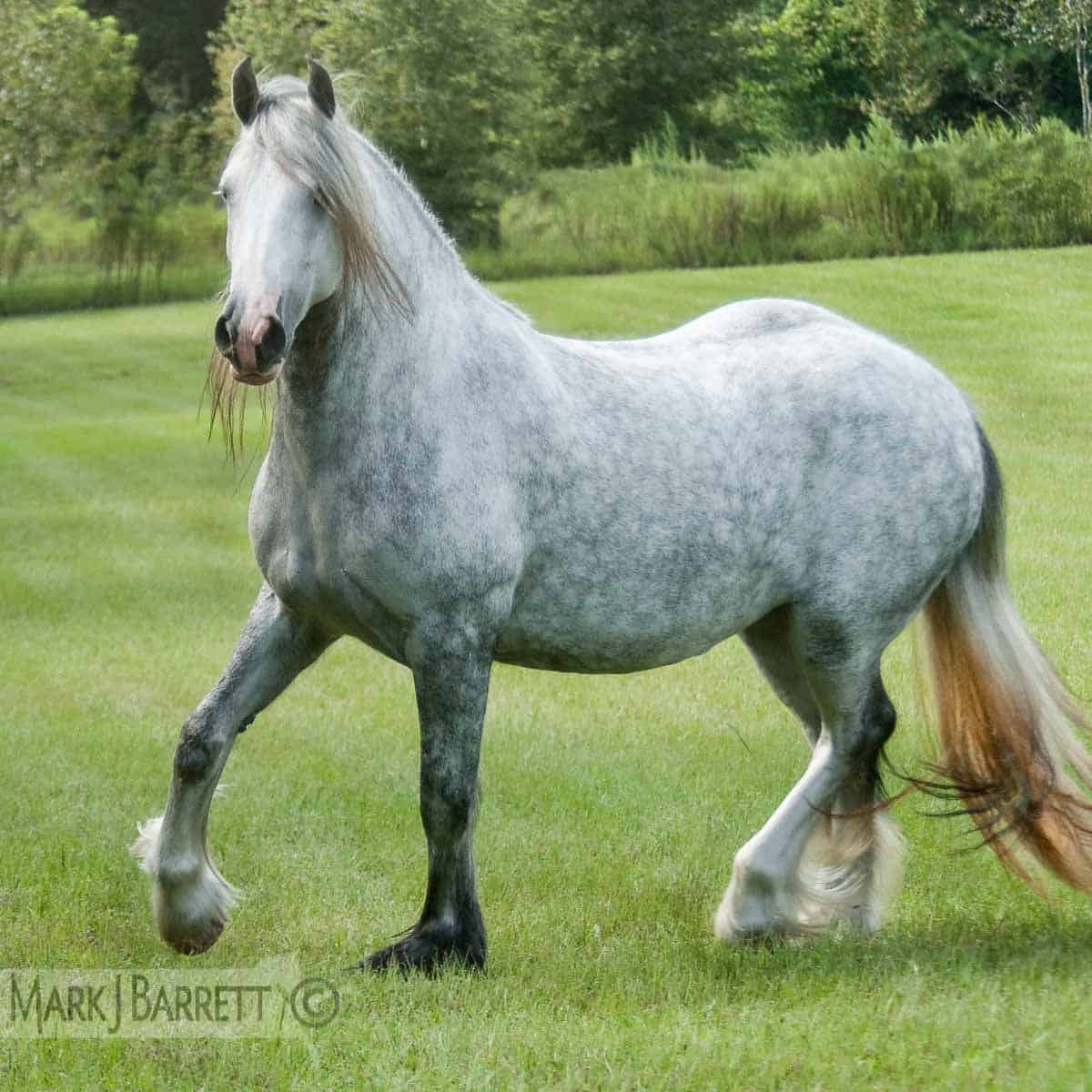 This farm horse is the national breed for Ireland and was brought Down Under for ranch work. They were initially cold-blood horses, though the most common current version is the warm-blood Irish Sport Horse. The sport horse is a cross of thoroughbreds, warm-bloods, and Irish Draughts. In the wild, Irish Draught Brumbies are thick-set and have solid tones.

These can range from brown or grey to dun and black. They’re said to have kind eyes and furry hooves, and can sometimes have a mottled coat. Irish Draught Brumbies are big horses, usually 15.2 to 16.3hh and their heads hover at 9 inches. When they’re domesticated, they eat a lot, so they have to adjust their diets in the wild and may not grow to their full size. 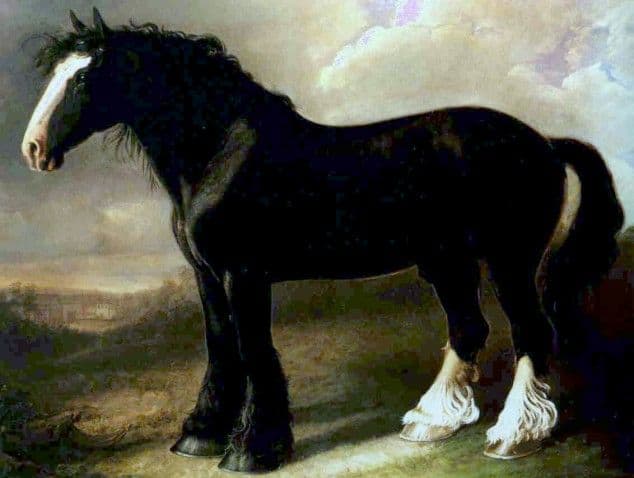 Sometimes called Shire horses, British Draught Brumbies are as thick-set as their Irish cousins. But their stockings are hairier while their bodies are solid colors – black, grey, or bay. They often have a white blaze marking down their faces. Shire brumbies can be quite tall – their ancestral breed holds multiple ‘tallest horse’ records at 17.0 to 17.2hh (178cm).

Shire horses were mostly used for pulling plows and heavy brewery carts. They’re powerful and muscular, sometimes weighing more than a ton. They have big eyes, an arched neck, and a broad chest. While they have a calm, docile nature, Shire horses are prone to CPL, and this susceptibility continues in brumbies. But since they’re even-tempered, they’re easy to break. 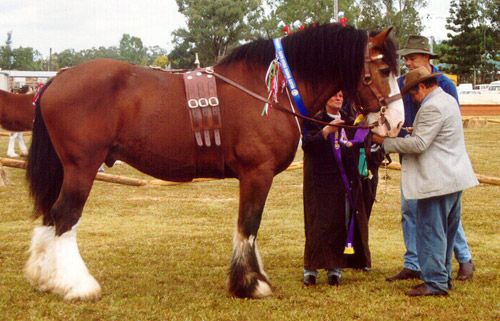 The original Australian Draught was a mix of several draught breeds including the Belgian and British ones plus Clydesdale, Suffolk Punch, and Percheron. They’re large horses with some feathering and a wide choice of colors from all those mixed bits of horsey DNA. Their mingled genes are well suited to the drastically different weather patterns in Australia.

This makes Australian Draughts prolific as brumbies because they’ve adjusted more easily to this wild climate and lifestyle. When settlements proved too harsh, ranchers would regularly head to greener pastures, leaving their horses and structures behind. The horses then had to fend for themselves, and this breed did particularly well. They’re smaller in the wild though. 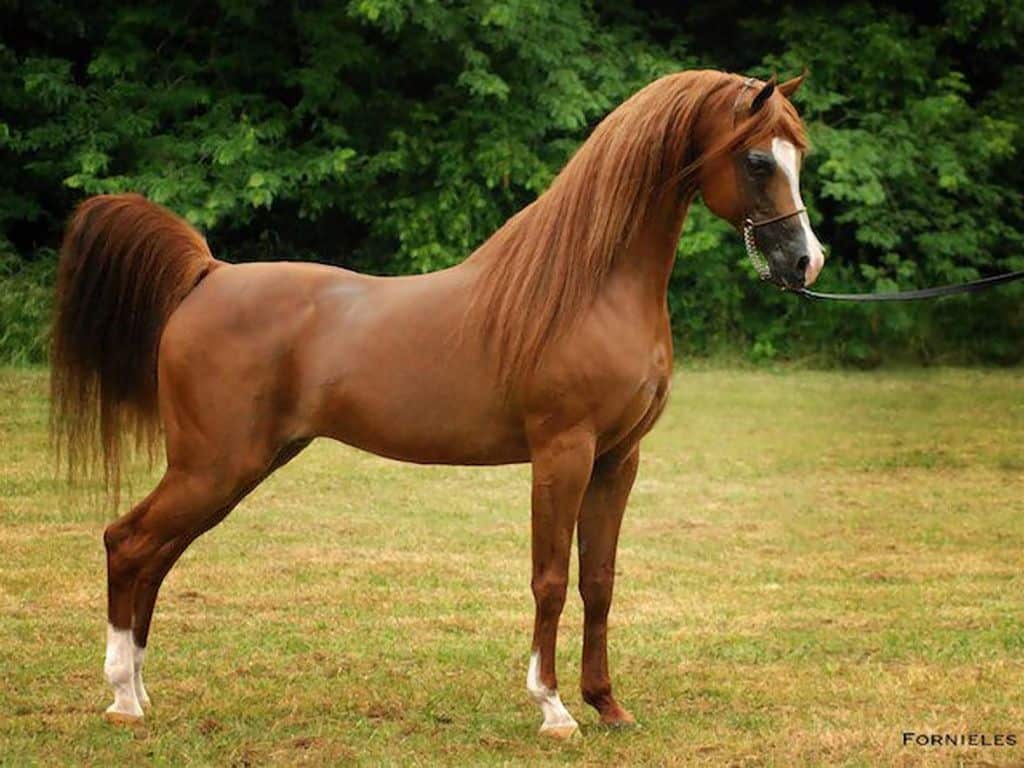 The brumbies we’ve looked at so far were stocky workhorses. But the Arabian horse was mainly brought over for racing and other equestrian sports, so they have slimmer, more streamlined bodies. Their upturned ‘ponytail’ is a distinct characteristic, as are their dipped backs, wedged faces, and their wide foreheads that sometimes bulge between the eyes.

They do well in the desert regions of Australia, riding between distant settlements and rounding up livestock. They’re prized for their pliability, speed, and endurance. And because they have a smaller body mass, they can outlast draught brumbies once they go feral. Still, being clever and good-natured, they’re more likely to approach human settlements. 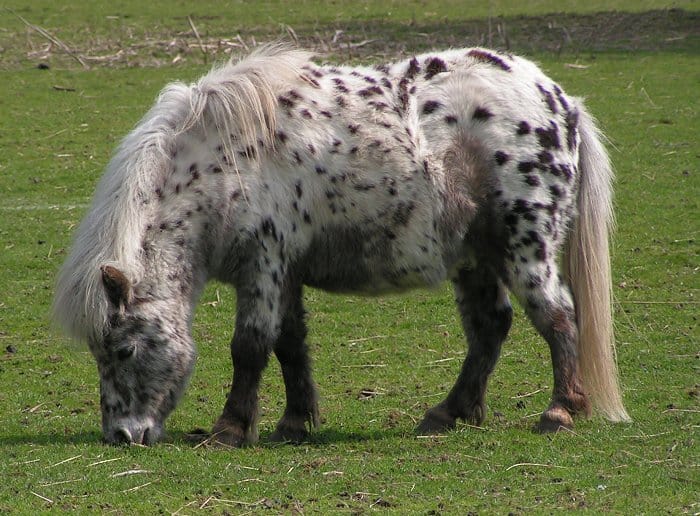 While we use ‘pony’ to describe any gentrified horse, it defines a full-grown animal with a small body size. And British Ponies could be plain or spotted. They’re 8 to 14.2hh on average, with thick bodies and stubby legs. British Ponies are native to England, and because their bodies are ‘compressed’, their fur and mane can be thicker. They’re mostly hobby horses.

Ponies came to Australia as horses for younger children because of their size. They were also favored because they were smart but friendly, so they work well with inexperienced or timid kids. They can be sneaky and cunning but are recommended for beginners. Ponies are considered draught horses, and their hardy nature is suited to the feral brumby lifestyle. 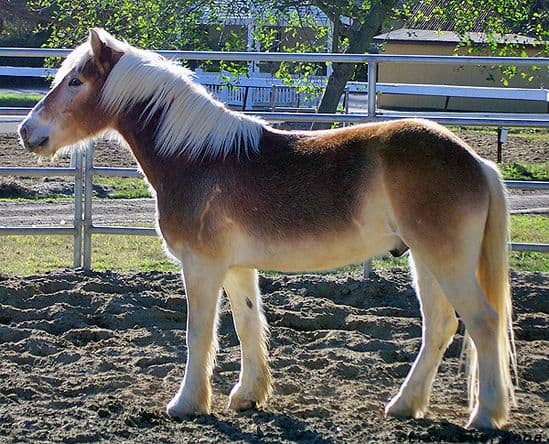 Pangaré ponies come in various colors, but their identifying feature is their eyes and underbelly. The fur around their eyes are tummies are lighter than the rest of their bodies. The lower part of the horse (bottom, legs, chest, throat, and flank) might have the same tone.

The brumby’s muzzle can be equally blonde, off-white, or tan. These pale body parts come from their ancestral breeds, which include British Ponies, Halflingers, Belgian Draughts, Fjords, and Timor ponies. They had thick, woolly fur but it thinned to suit the local climate.

Pangaré is a trait rather than a breed, so these horses can be any color. And brumbies with this kind of shading are sometimes called mealies or light-pointed horses. Incidentally, mules and donkeys are light-pointed as well. It might be a form of evolutionary camouflage.

Both mustangs and brumbies descend from workhorses. They were used for ranching, travel, hunting, and farm work. Later, horse racing got popular so thoroughbreds joined the fold. These horses are specifically bred for speed, endurance, and trainability – they have to obey their handlers and jockeys. Once they go feral, they’re fast, spirited, and hard to break.

If you do manage to tame a feral thoroughbred, you can turn it into a light horse, meaning it does ‘light work’ like causal riding or cart-pulling. Thoroughbred mustangs and brumbies can also be used for equine therapy. It’s a common form of treatment for at-risk teens and/or patients on the spectrum because working with and taming horses boosts their self-esteem.

Children and adults who struggle to get along might find it easier to connect with a horse, so mustang and brumby camps and stables are useful treatment facilities. Unfortunately, these wild horses are also caught and sold for meat. This meat (chevaline) is mostly exported to Europe where hamburgers (made of horse meat) are sometimes cheaper than beef burgers.

What’s your favorite type of mustang or brumby? Tell us why you love it in the comments.