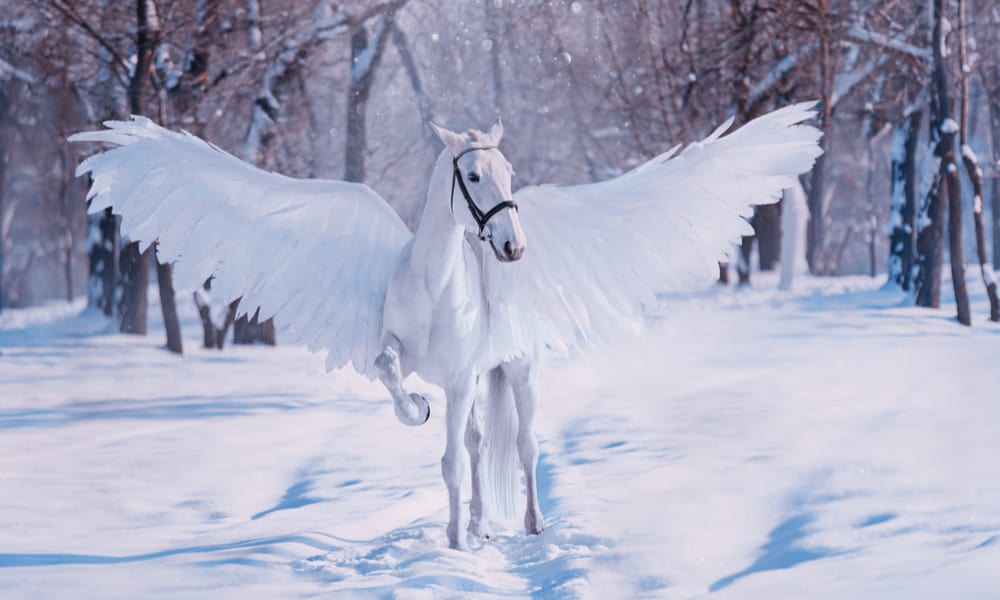 Throughout history, human beings have had a close relationship with horses. So it’s hardly surprising that horses feature in all kinds of myths and legends from around the world.

We’re going to take a look at 15 mythical horses and the stories told about them. It’s a tour that will take us into the ancient world, across continents and cultures.

So if you’re ready, let’s find out more!

Arion is mentioned in the Greek epic poem The Iliad as the horse of Adrastus. He was said to be amazingly swift, and to have a thick, lustrous mane of black hair.

But Arion wasn’t just any fast horse. He was a divine creature, the offspring of the gods. Different accounts give him different parents, but the most common story is that his mother was the goddess Demeter.

Demeter, the legend goes, turned herself into a horse to escape the god Poseidon. She took refuge among the horses belonging to a king named Oncius. But the wily Poseidon transformed himself into a stallion and mated with her, producing Arion.

The horse was given to the hero Heracles, who rode him into battle before giving him to Adrastus. Arion saved Adrastus’s life at Thebes, carrying him away from his enemies after the battle was lost.

2. The White Horse of Kent 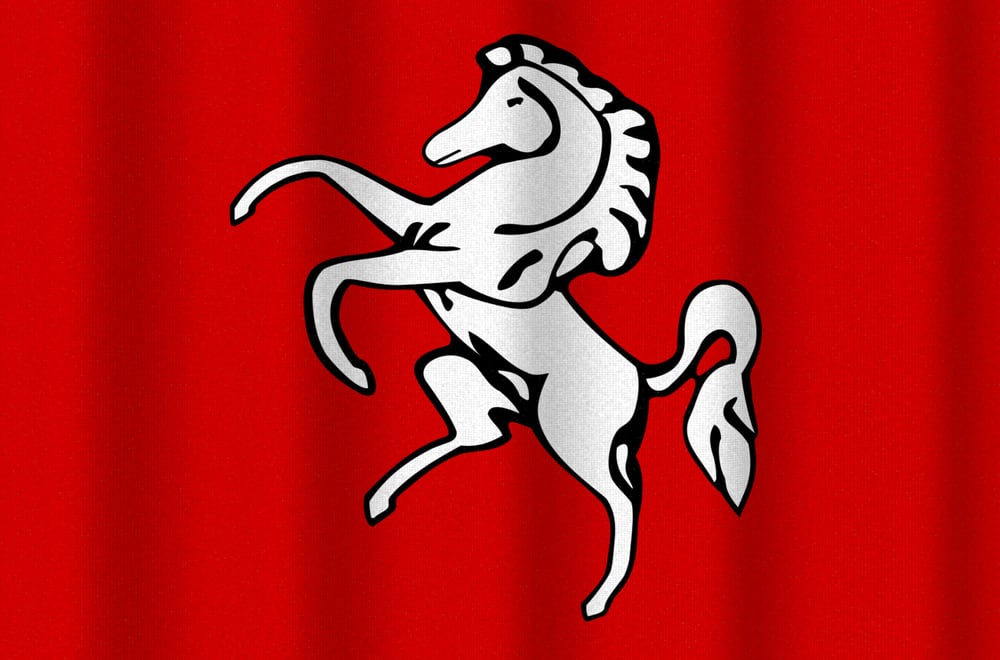 The White Horse of Kent is a historical symbol rather than a real horse. It shows a rampant white horse on a red background, and it’s associated with the county of Kent in England.

It’s thought to be the emblem of Horsa, a Kentish king of the fifth century. It’s found on the flag of Kent, as well as on the county’s coat of arms.

The borders of Kent have changed since Horsa’s time. As a result, you’ll also find the White Horse of Kent in the coats of arms of a number of what are now London Boroughs. Examples include Bexley and Bromley to the south-east of the city. 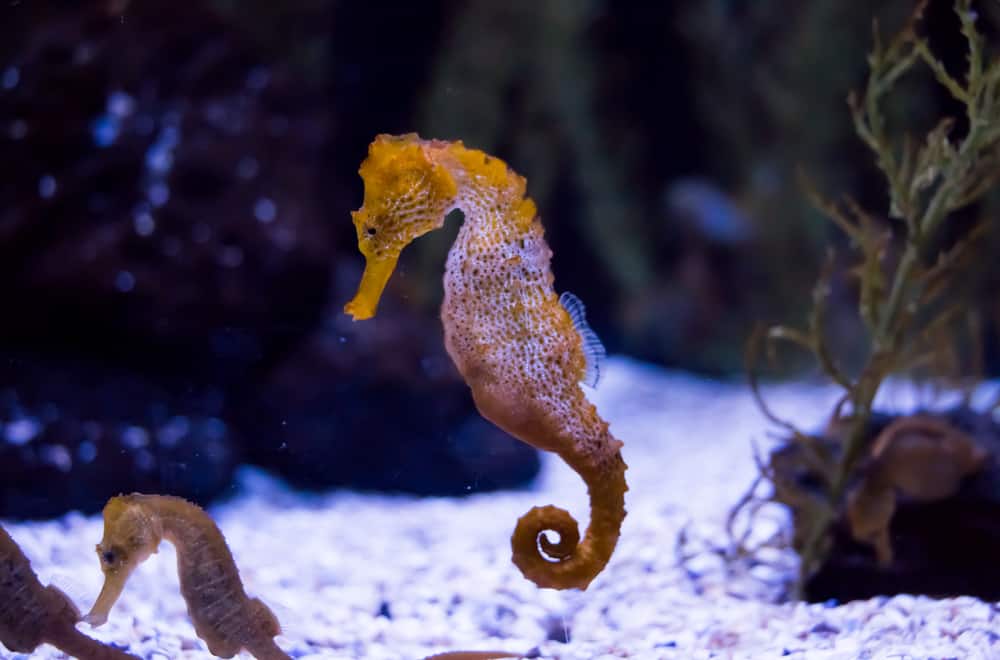 The strange creature that is the hippocampus has the head and upper body of a horse, and the tail of a fish. It appears in the mythology of a number of ancient Mediterranean cultures, amongst them the Phoenicians, Etruscans, Greeks and Romans.

Sometimes, the hippocampus is depicted with wings, as in Etruscan tomb reliefs and wall paintings. And if you visit Rome today, you can see winged hippocampi amongst the carvings on the Trevi fountain.

There’s another hippocampus in the night sky. In 2019, one of the small moons of Neptune was given the name “Hippocamp” after the creature.

The Mares of Diomedes were four fearsome horses in Greek mythology. Diomedes was the King of Thrace who owned them, and they are also known as the Mares of Thrace.

These giant creatures fed on a diet of human flesh and were kept tethered to a bronze manger. They were captured from Diomedes by Heracles, who fed their master to the horses.

They were apparently calmed by their meal, allowing Diomedes to bind their mouths closed. He then took the horses to King Eurystheus. In some versions of the myth, the mares have a happy ending, roaming calmly around Argos. In others, they are killed by Zeus.

Bucephalus, the famous horse of Alexander the Great, was said to be descended from the Mares of Diomedes. 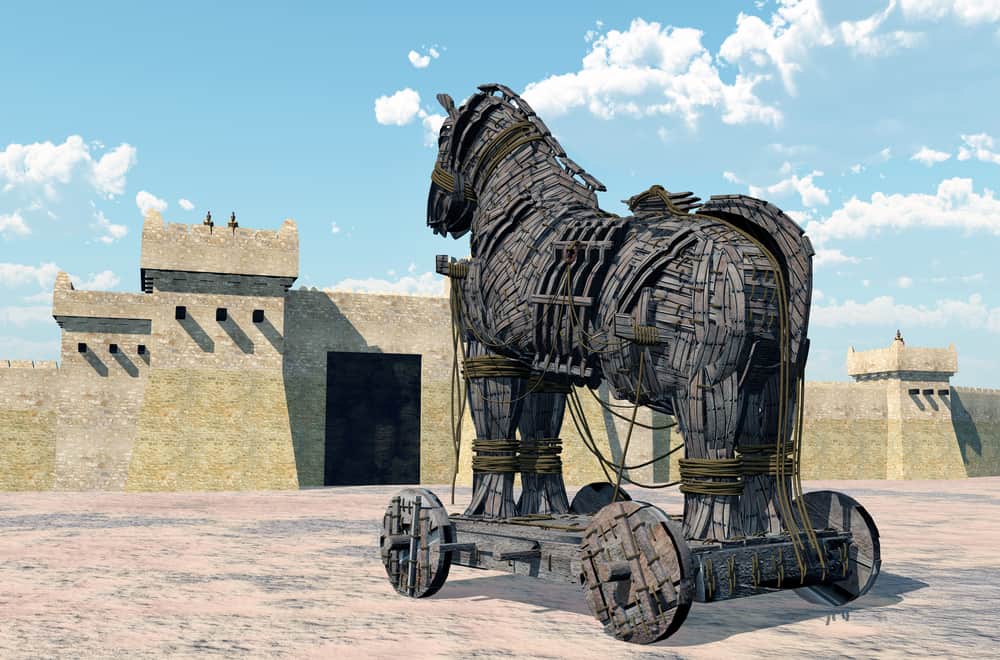 The Trojan horse is one of the most famous stories in Greek mythology. It takes place in the Trojan war, after a ten-year siege of Troy by the Greeks.

The cunning Greek Odysseus ordered a wooden model of a horse to be constructed and left outside the gates of the city. The Greeks then pretended to sail away. The Trojans, believing the horse to be a gift, brought it inside the city and proceeded to make merry.

Little did they know that the horse was hollow and filled with Greek soldiers, including Odysseus himself. While the city slept, the soldiers emerged and opened the city gates, admitting the rest of the Greek army. Troy quickly fell to the invaders.

The myth is so famous that the term “Trojan horse” has now passed into everyday language. It is used to describe any strategy that encourages a target to invite its foe into a place of sanctuary. And it’s also used in computing, where the term “Trojan” is used for a type of virus. 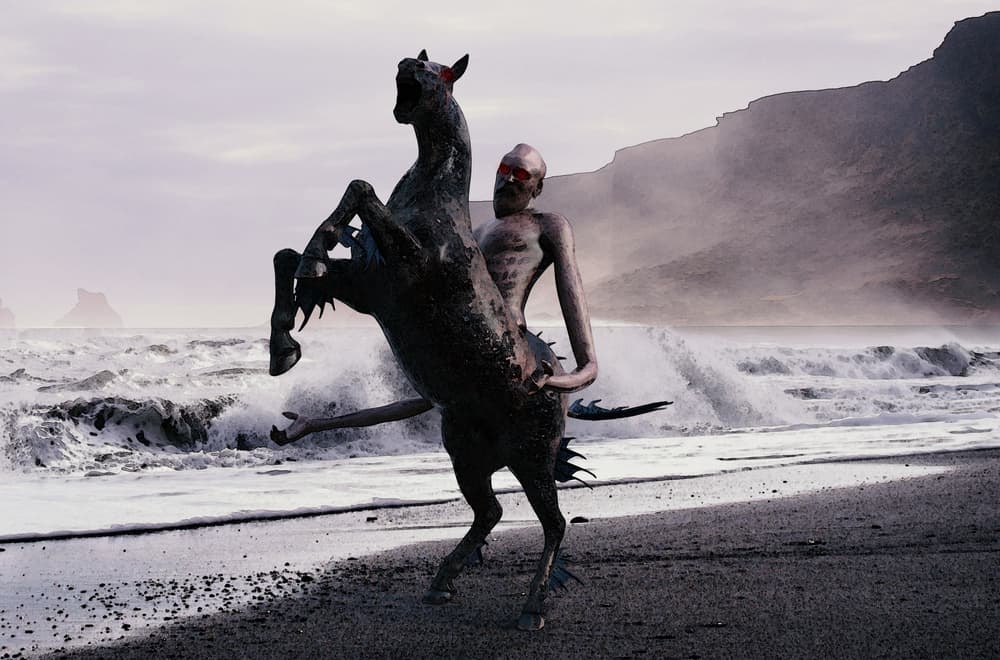 The nuckelavee features in the myths and legends of the Scottish Orkney Islands. It’s a terrifying demon which lives in the sea.

When it ventures onto land, it takes the appearance of a horse combined with some human features. Some accounts describe it as having a man’s torso attached to a horse’s back, as if it were riding it. It was also said to have no skin and black blood.

The nuckelavee was very dangerous, with breath that could kill crops, sicken livestock and bring disease.

It would not, however, come ashore while it was raining. And it couldn’t cross fresh, flowing water. Anyone pursued by the nuckelavee would therefore have to hope for a convenient stream to cross and take refuge.

Árvakr and Alsviðr are two horses from Norse mythology. They were believed to pull the chariot of the sun god across the sky each day.

Being in such close contact with the sun was hot work – but fortunately the gods recognised this. They placed bellows beneath the horses’ shoulders to cool them as they ran. 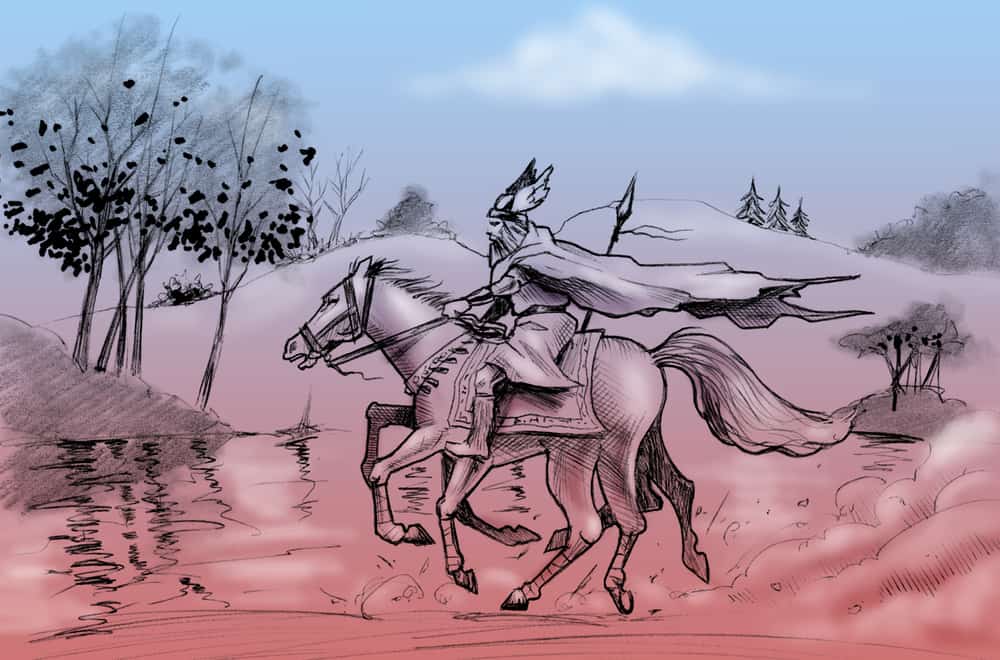 Sleipnir was another horse from Norse legend. He was the mount of the god Odin, and had eight legs. He was said to have been the offspring of Odin’s son Loki and the stallion Svaõilifari.

Sleipnir was a gray horse and was said to be the greatest horse owned by gods or men. One story has him ridden by Hermóõr, one of Odin’s sons and the messenger of the gods. Sleipnir carries Hermóõr to Hel to retrieve the god Baldr, with Sleipnir making a mighty leap over Hel’s gates.

Pictures of an eight-legged horse, most likely Sleipnir, have been found carved in stone on the island of Gotland in Sweden. They date back to the eighth century.

Gringolet is perhaps the most famous horse of Arthurian legend. The mount of Sir Gawain, he was said to have a white coat and distinctive red ears.

He was renowned as a great war horse, but was killed in battle as he was ridden by Sir Gawain. But his opponents had good reason to rue their actions.

Sir Gawain was filled with fury at the death of his beloved horse. His strength was multiplied by his anger, and he ran riot amongst the enemy until night fell.

Liath Macha appears in Irish folklore. His name means “Gray of Macha”. He was said to have been found by the hero Cú Chulainn in a pool in the mountains, together with a second horse, Dun Sainglend. Cú Chulainn leapt on their backs and rode them for a day before they submitted to him.

On the day of the hero’s death in battle, Liath Macha refused to be harnessed into his chariot. He did so only when Cú Chulainn took the harness himself, but wept tears of blood.

He later led the hero Conall Cernach to the body of his fallen master. Conall went on to avenge Cú Chulainn’s death. 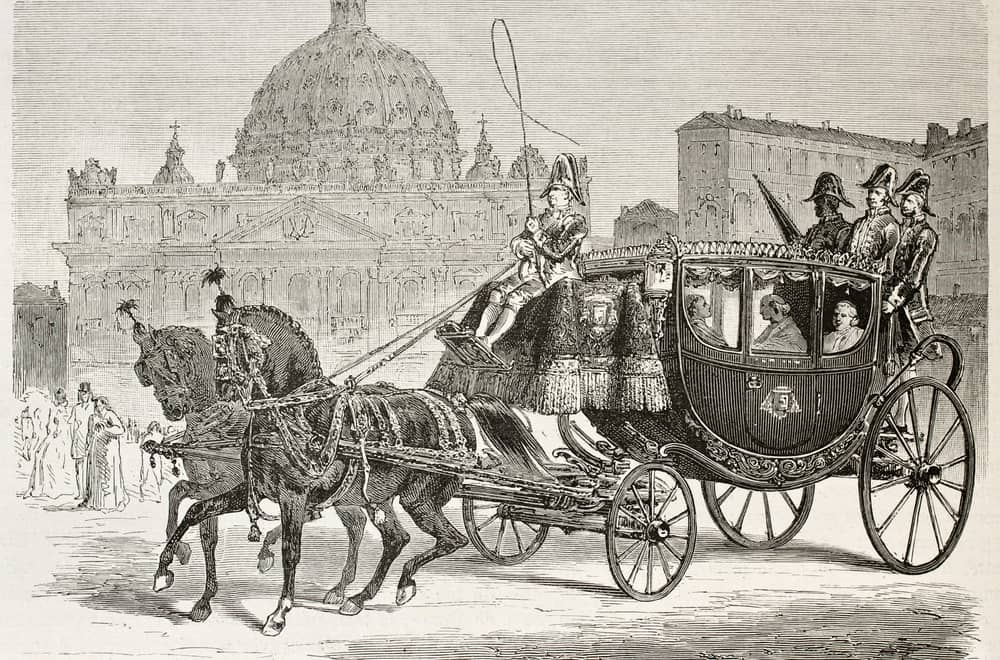 Bayard is a mythical horse who appears in French songs from the twelfth century. He had a bay coat and the incredible power to change size to suit his rider.

He was owned by Renaud de Montauban. His size-changing ability allowed him to carry Renaud and his three brothers at the same time. He could also understand human speech.

Eventually, Renaud was forced to give up Bayard to his nemesis, the Emperor Charlemagne. Charlemagne ordered a stone to be tied around Bayard’s neck, and for him to be drowned in the river.

But Bayard was too strong for such treatment. He smashed the stone with his hooves and escaped to live out his days happily in the woods.

Morvarc’h appears in Breton legends. Though these date back many centuries, most of the details about him appear in a 1926 text by Charles Guyot.

This describes Morvarc’h as having special powers as a result of his supernatural heritage. He is said to be the offspring of a siren and an undine, elemental sea creatures. He is strongly connected to the sea, with legends having him saving a king and princess by swimming through enormous waves.

Depictions of Morvarc’h date back hundreds of years. The earliest known image is a fifteenth century lead statue which stood on the roof of a cathedral in the town of Quimper. It was sadly destroyed during the French revolution, but a replacement was modeled on a surviving fragment. 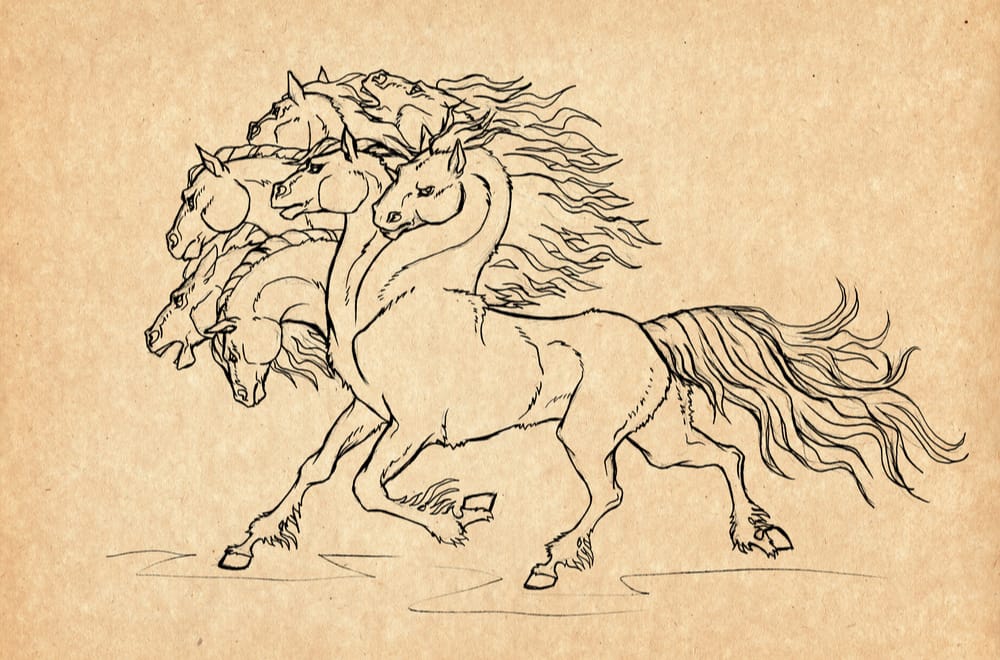 Uchchaihshravas is associated with the Hindu pantheon, and is known as the king of horses. He is a magnificent white steed with seven heads and the ability to fly.

He was created during the churning of the milk ocean. He rose from the waves and was claimed by the god Indra as his mount. Other stories have him being created as a result of a sacrifice by the creator god Brahma and being claimed by Bali, the king of the demons.

The two sisters Vinata and Kadru are said to have had a bet about the color of Uchchaihshravas’ tail. Vinata was sure it was white, while Kadru bet that it was black.

Kadru cheated, telling serpents to cover the horse’s tail so that it appeared black. In this case, the cheater prospered, and Kadru won the bet. Vinata had to become her sister’s servant in payment. 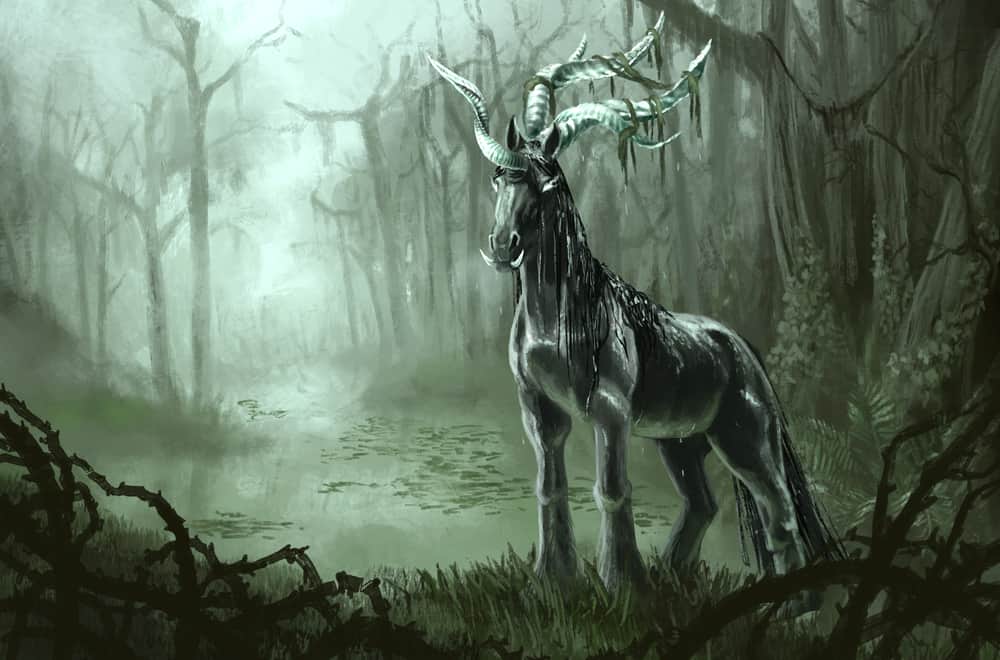 The Kelpie is a creature of Scottish folklore, believed to inhabit bodies of water across Scotland.

In the water, it is said to have the appearance of a powerful black horse. But on dry land it is able to take human form. A clue to its supernatural nature remains even on land, however – its feet are said to remain as hooves.

Kelpies take different forms in different bodies of water. The kelpie of Aberdeenshire has serpents for its mane. The kelpie dwelling in the River Spey is white instead of black. And it is said to have a beautiful singing voice, which it uses to lure its victims onto its back. 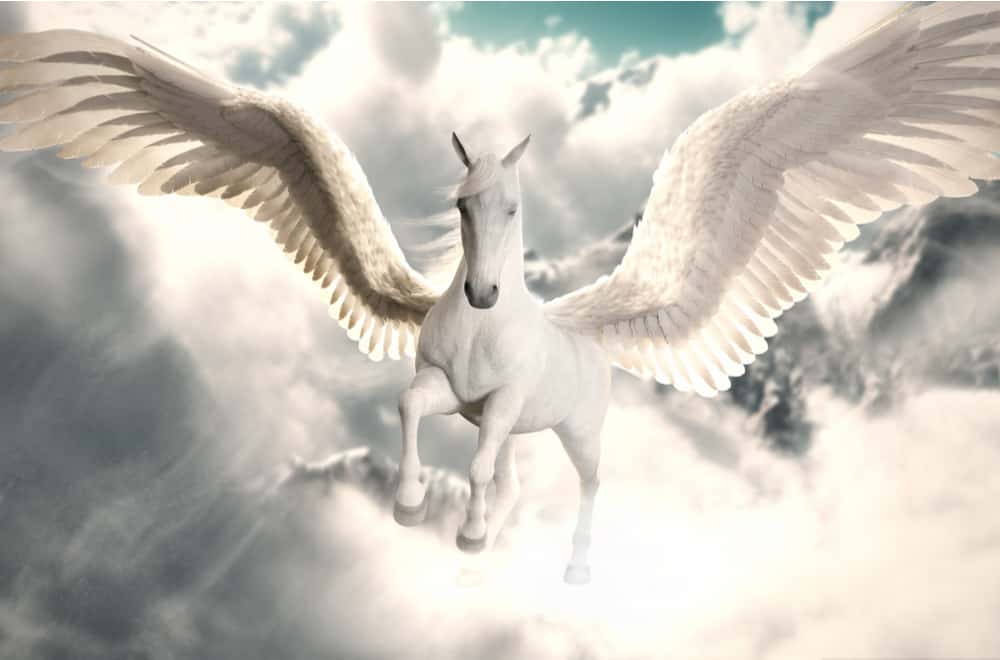 Perhaps the most famous mythical horse of them all is Pegasus, the winged horse of Greek legend.

Pegasus was the son of the Gorgon Medusa. She – like many figures of Greek myth – at one point took the form of a horse. In other versions of the story, Pegasus sprung up from Medusa’s blood when her head was cut off by Perseus. And still later, Poseidon is recorded as Pegasus’s father.

Pegasus had numerous powers in addition to the ability to fly. Everywhere he struck his hoof, it was said that a spring burst out of the earth. He helped the hero Bellerophon defeat the Chimera. And later he carried thunderbolts for Zeus.

It was in gratitude for his years of service that Zeus honored him by transforming him into a constellation.

With legends dating back to earliest times, horses sometimes appear as gods, sometimes as demons, and sometimes as man’s brave and loyal companions. One thing is clear – horses have intrigued and fascinated human beings for generations.

We hope you’ve enjoyed our round-up of 15 mythical horses!