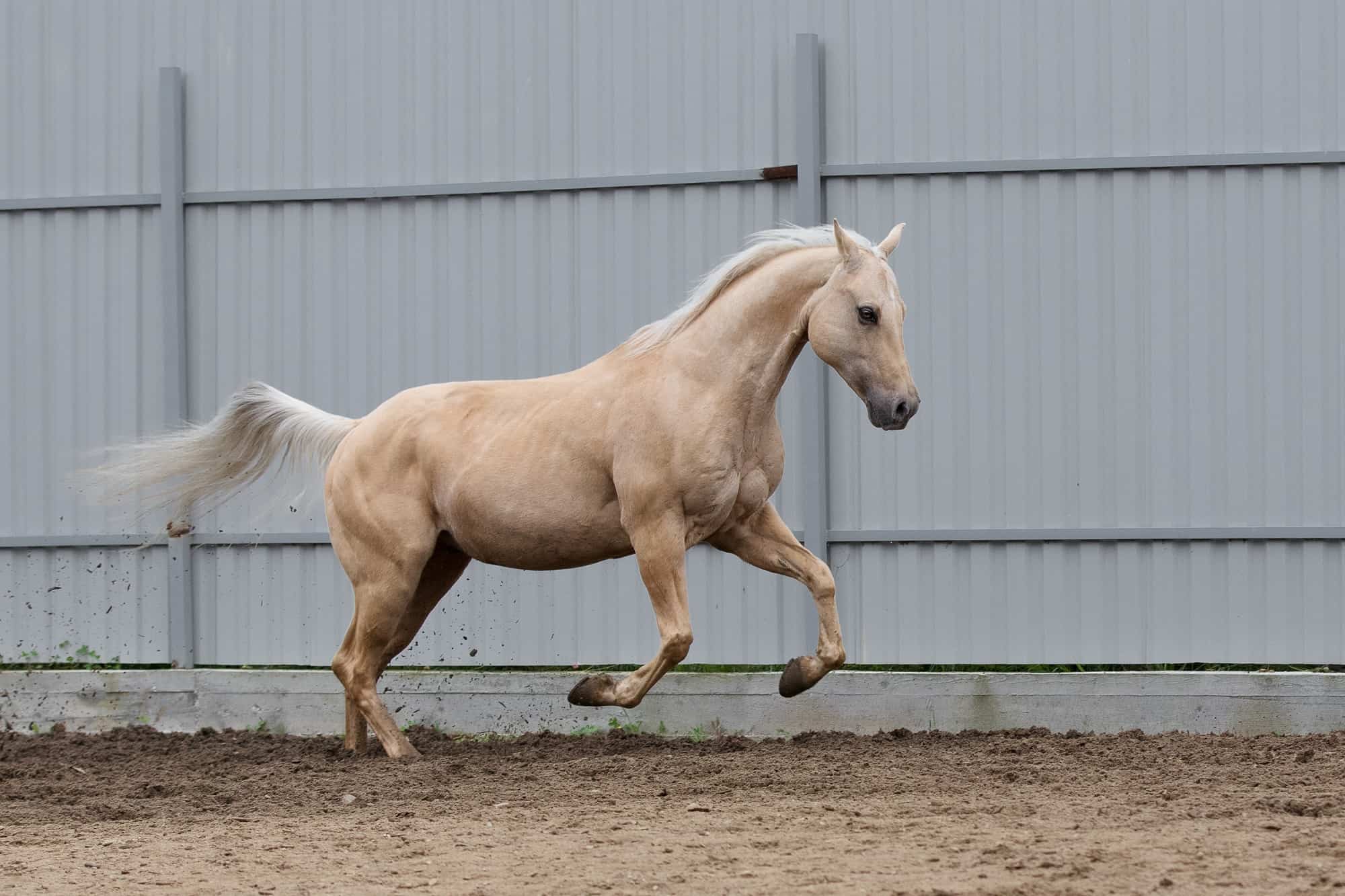 Palomino horses are a beauty to behold and are all around us. You will see them grazing in fields, in racing competitions, on trail rides, and in many other equine activities.

Their white mane and tail glisten like the sun to complement their golden coat. But there is much more to palominos than just their gorgeous color. Stick with us as we explore the palomino horse, its origin, characteristics, and fun facts that set it apart from other horses. 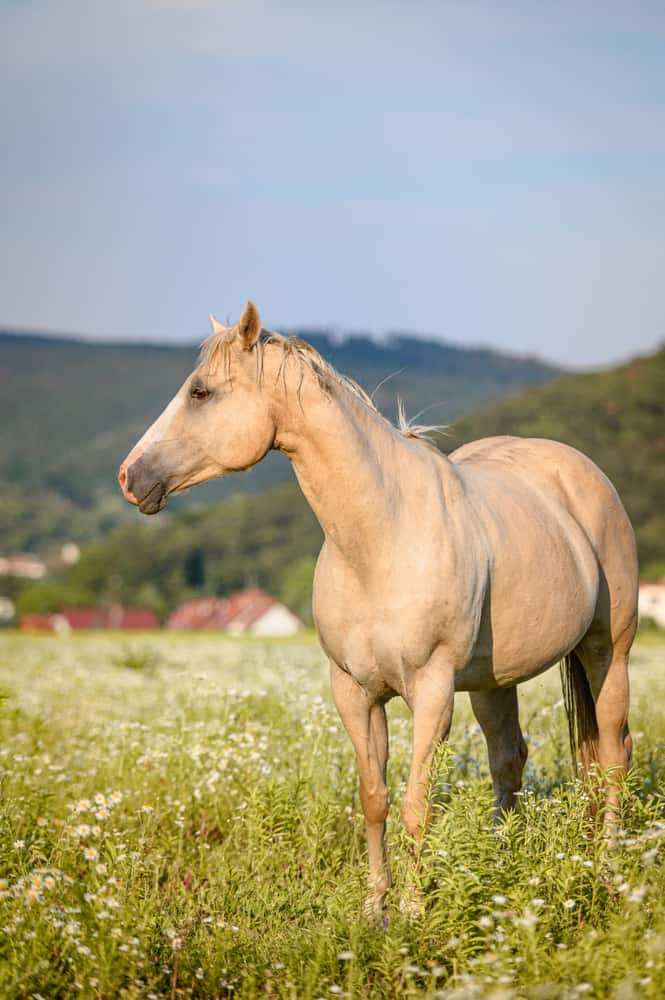 The first thing you need to know is that palomino is not a breed of horse but a color. Palomino horses have a golden coat, white mane and tail, and dark eyes. They can be developed from many breeds like the Morgan, Quarter Horse, and Thoroughbred.

According to experts, a palomino is developed when a chestnut horse inherits a type of dilution gene that dilutes or lightens the ginger to make it more golden. The same gene has been found to transform bays into buckskins. When in excess, the gene creates perlinos and cremellos.

The lightening gene is present in various breeds but is more prevalent in ponies and American stock horses. Breeds that have light flaxen mane and tail like the Arabian chestnuts are sometimes considered palominos due to their appearance even though they don’t contain the dilution gene.

The Origin of Palomino Horses 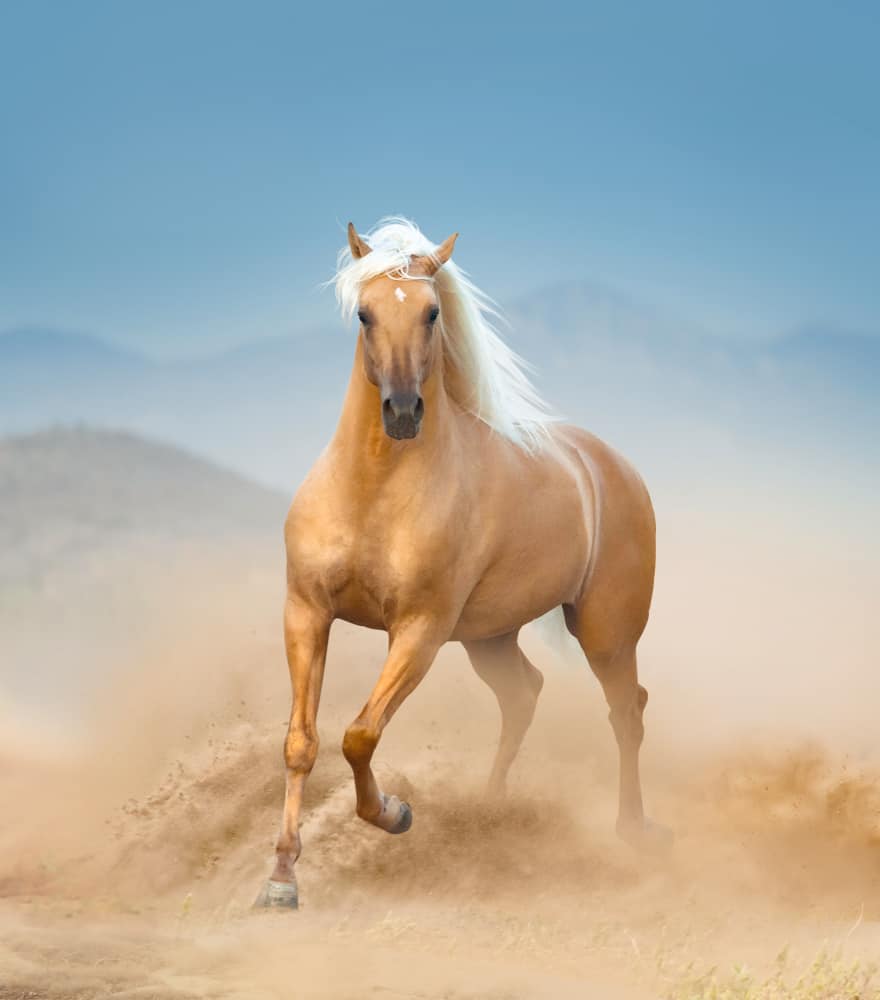 Although palominos are some of the most popular horses today, no one can really tell exactly when equines started developing a palomino coloration.

Some experts argue that these horses may have existed since the discovery of horses. Others claim that the golden coat may have been developed in a desert area as the animal’s way to adapt to the environment.

The second theory may have some truth in it, as it bases its argument on Darwin’s theory of evaluation as well as the adaptation of species to various surroundings. In the desert, horses evolved the golden coat to match the color of the sand so they can be safe from predators.

Over the years, the golden color became even lighter to protect the horses against the extreme heat from the sun. Light colors reflect sun rays and absorb less heat, which helped keep the animals cool in the desert.

Based on this theory, we can say palomino horses originated from the desert and spread to other parts of the world. But no scientific researches have been conducted to support this theory.

It’s known, however, that there were palomino horses in Rome, China, Greece, Mongolia, Japan, Persia, and other ancient empires due to their depictions in literature and art. 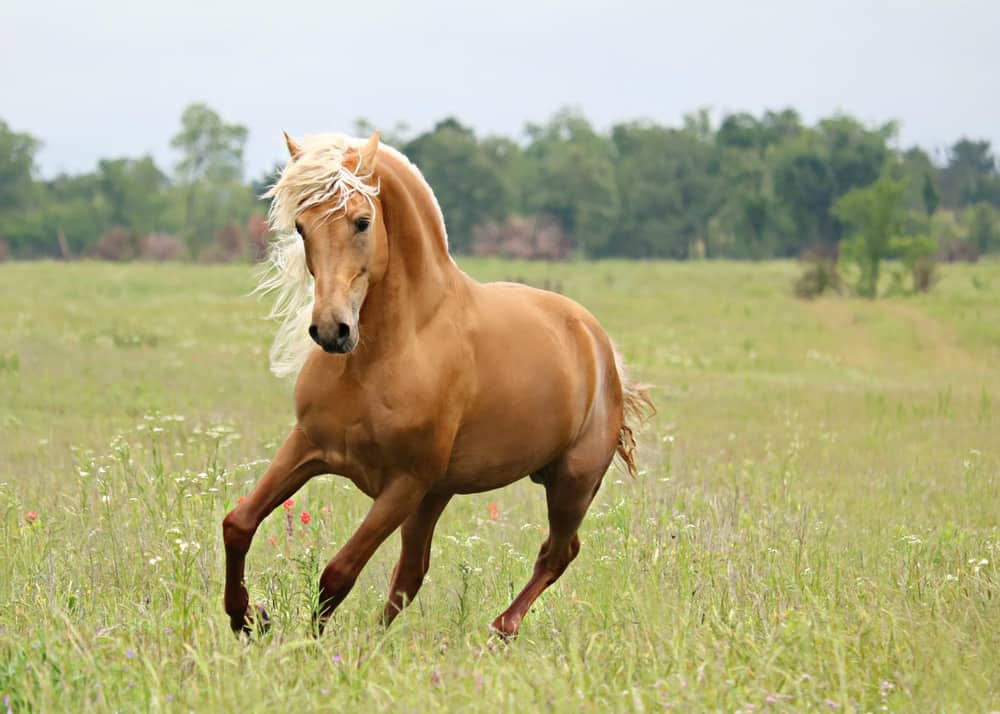 1. Most Palominos are Bred from Quarter Horses

As stated earlier, there are a host of horse breeds that can potentially produce palomino coloration. The highest rate of success, however, has been found to come from Quarter Horses. Out of every ten palominos, five of them are usually Quarter Horses.

2. Some Horses Look Like Palominos But They Genetically Aren’t

For a horse to be a true palomino, it must have a dilution gene. Some breeds, however, have a chestnut coat that appears golden and it can be difficult to tell them from palominos.

A good example is the Haflinger. While this breed has a light coat and a brilliant white mane and tail, it doesn’t carry the dilution gene. Haflingers are genetically chestnut horses but it’s very easy to mistake them for palominos.

3. There Are Different Shades of Palomino Horses

Most palominos have a golden coat, but this color can vary from breed to breed, with some horses exhibiting a creamy, brassy, pale gold, or deep gold coat. When it comes to the manes and tails, a palomino will mostly have white hair, but some breeds have dark strands in their hair.

The coat color of a palomino horse can change based on various factors. Diet, for instance, has been found to affect the lightening or darkening of the coat color. A horse that constantly feeds on hay or grain will have a darker coat color. Certain minerals can also cause the white mane and tail to develop a red tint.

A palomino can change color based on the season of the year too. Sometimes their summer and winter coats can be so different you will think they are two different horses.

5. Palominos Are Horses of Royalty

Palominos are some of the horses that were reserved for royalty in ancient times. Queen Isabella of Spain is reported to have owned more than one hundred palominos and only the royal family was allowed to ride them. She forbade any commoner from owning a palomino.

This queen is also famous for spreading the love of palominos across the world. She had these golden horses sent to North America to introduce the palomino gene to the native horse gene.

Since there were more horses available, they started trapping and domesticating more horses, which significantly improved their mode of transportation.

No one really knows when the first palomino horse appeared, but we do know that these golden beauties have been revered for thousands of years.

During the crusades, palominos were the real deal. Not only were they fast, strong, and easy to train but also looked elegant when riding into battle.

8. The First Palomino Was Named ‘King of Kings’

The first palomino, El Rey de Los, which is Spanish for ‘king of kings’ was registered in 1936 by the Palomino Horse Association, and this wouldn’t have been possible without the actions of Dick Halliday.

Dick spent years studying colorization and writing articles on the same to get the public’s attention. This campaign triggered a chain of reactions that motivated breeders from all over the world into specializing in palomino colorization and registering their horses.

9. Mister Ed, the Horse Was a Palomino

Remember the 1960s comedy show, Mr. Ed? That speaking horse was a palomino. Even though the show is filmed in black and white, that gorgeous white mane and tail don’t lie.

As we mentioned earlier, it is easy to think every golden horse you see is a palomino. Yes, they may have the golden, yellowish tan, but that tan is produced by different genes from those present in palominos. Here are some of the horses often mistaken for palominos. 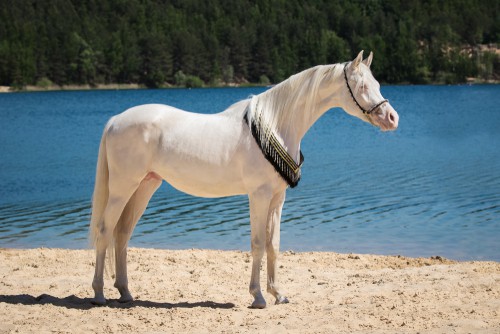 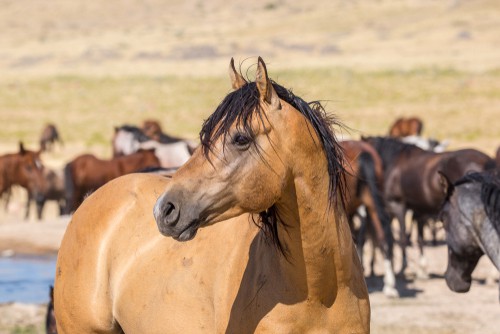 If you see a horse with a golden coat and a dark/black mane and tail, that’s a buckskin. A buckskin coat is created when the cream gene lightens the horse’s bay base coat. 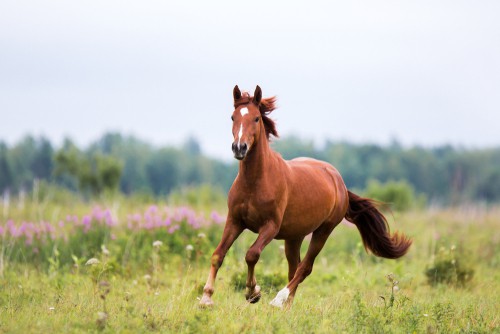 Palominos carry a cream diluting gene but chestnuts carry a flaxen gene responsible for creating the light chestnut coat and light cream mane and tail. An excellent example of a chestnut horse is the Haflinger. 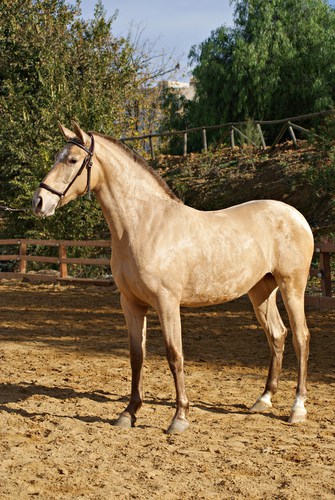 The champagne gene creates a golden shade that is so similar to that of palominos. The only difference? Champagne horses have unique patches and spots on the skin. 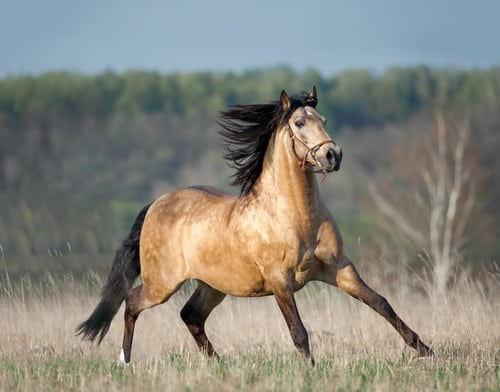 This one is tan-colored with a dark mane and tail. A dun horse will also have primitive markings on its back and forearms. 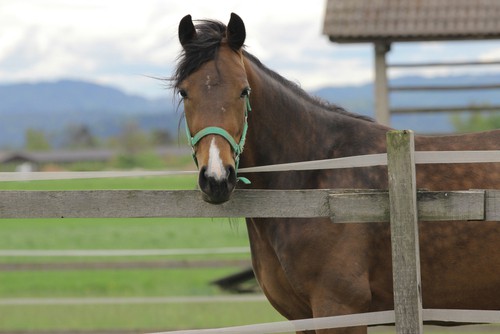 Chocolate horses have a liver-chestnut coat that is complemented by a flaxen mane and tail. This color is created by a silver gene that lightens the black base coat, making it chocolate brown.

Since palomino is just color, there is no specific way to identify the temperament and personality of palomino horses. These traits will depend on the breeds that made up the horse.

One of the most popular palominos, the Quarter Horse, for instance, will be docile and laid back. Quarter Horses are also intelligent with a gentle disposition, which makes them easy to domesticate and train.

Another palomino, the Saddlebred, is favored for being smart and sociable. Saddlebreds are strong and always willing to work. They also love learning new things and that means you can train them easily.

The surroundings in which a palomino is raised can also influence its temperament. If the horse lives in a harsh environment, you can expect it to exhibit hostility and aggression.

Palomino horses are generally healthy and can live for up to 30 years. With proper care and constant veterinary checkups, they can enjoy their entire lifespan without experiencing any serious ailments.

However, there are diseases that are prone to all horses that you should always be on the lookout for to ensure your animal stays healthy. These include:

Gastric ulcers develop on the lining of the horse’s stomach and generally affect equines that take part in shows and performance events. It can be prevented by feeding your horse a proper diet and having a scheduled feeding routine.

Osteoarthritis is also referred to as degenerative joint disease and is known to cause inflammation of joint tissues. As a result, the joints swell and become stiff, making it difficult for the horse to walk.

To avoid this condition, make sure your palomino warms up before training and gets enough time to cool down after an exercise.

Horses have soft tissue in the hoof known as laminae. Inflammation of this delicate tissue can cause a condition known as laminitis, which can affect the horse’s mobility.

In extreme cases when the pedal bone pierces through the sole, you may need to euthanize the horse. You can avoid laminitis by keeping track of your horse’s weight.

Sometimes your palomino will experience abdominal aches, a condition commonly referred to as colic. In most instances, colic will cause just mild stomach pains, but when it is severe, it can even cause the displacement of the intestines.

The condition is usually caused by ulcers, dehydration, or when excess gas accumulates in the gastrointestinal tract. Analgesics can be used to treat mild colic, but in advanced cases, the horse may require surgery.

Desmitis is simply the inflammation of the horse’s limbs, which causes lameness. Suspensory desmitis, the most common type of this condition occurs when there is an injury on the horse’s limbs.

To avoid desmitis, have your palomino exercise regularly; it will help strengthen the ligaments and prevent injuries.

Are Palomino Horses Good For Beginners?

Whether palominos are beginner-friendly or not is not an easy question to answer because as you know by now, palomino by itself is not a breed. Palominos exist in many different breeds and the traits of the ancestor breeds is what will determine whether a particular palomino is good for beginner or not.

How to Breed the Perfect Palomino Horse

When breeding a horse, some people will advise you to consider color as your number one factor. Well, that is a good thing to do especially if you breeding a palomino, but there are also other things you should put in mind to obtain the best results.

Experts recommend putting quality, temperament, and personality before anything else. It is also important to make sure both horses are free of genetic ailments that could be transferred to the young one.

To obtain the perfect palomino, one of the parent horses must be chestnut and the other one must be cremello. You can increase your chances of obtaining your preferred offspring by using a horse coat color calculator.

A calculator will show you all the colors the offspring is likely to obtain and their probabilities. It is a great way to obtain accurate results especially if you haven’t bred horses before.

Have you ridden or owned a palomino horse? Share your experience with us in the comments section.

1 thought on “What Breed of Horse is a Palomino?”