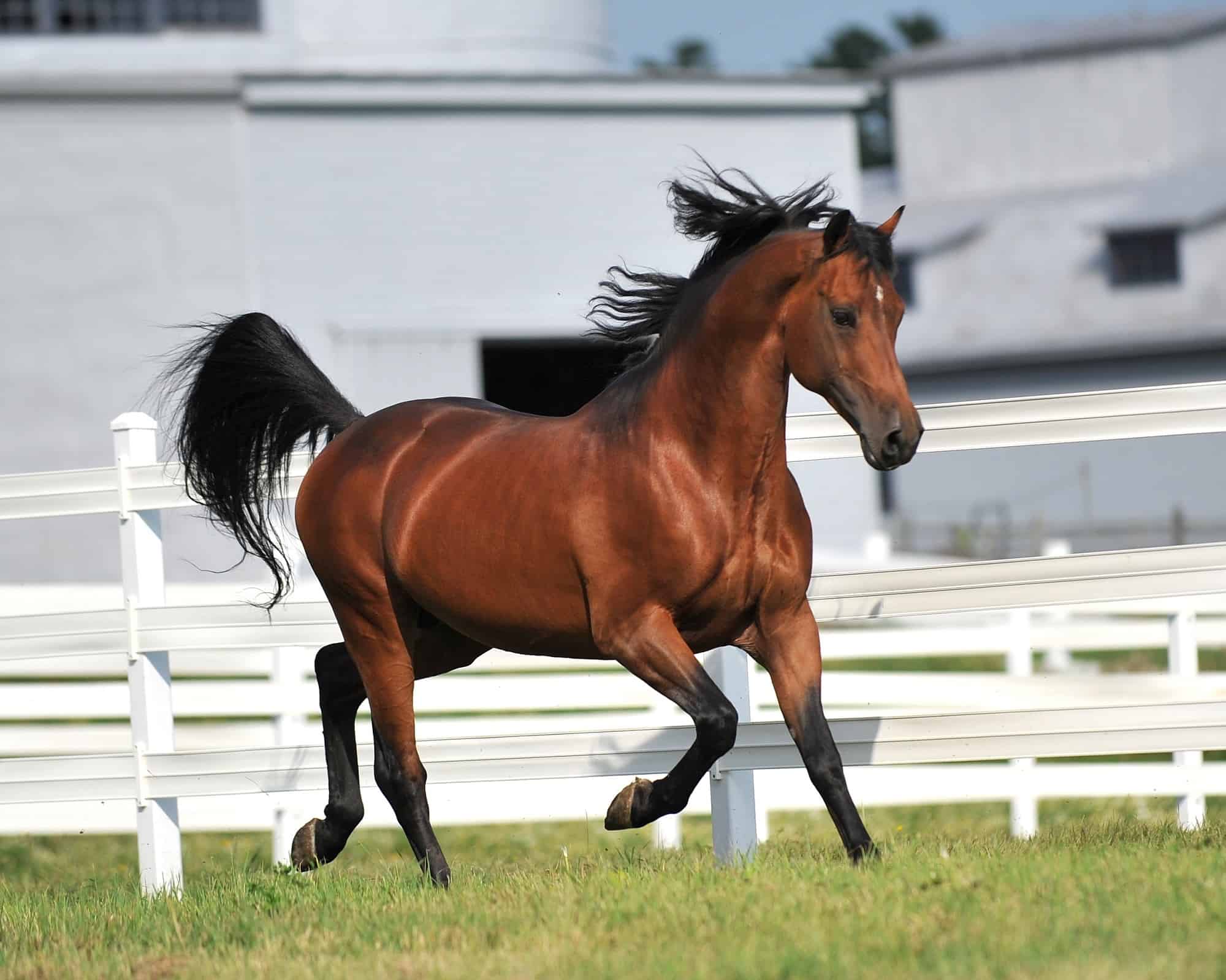 Morgans are amongst the most well-known of horses. But what is a Morgan horse? And why are they so iconic?

We’re going to take you through everything you need to know about this fascinating breed. We’ll find out their history and characteristics. And we’ll find some unexpected facts along the way!

So if you’re ready, read on to find out more …

The history of the Morgan

Morgans originated as a breed in the United States. In fact, they were one of the earliest breeds to do so, giving them a distinctively American identity.

They were actually the second all-American breed. The honor of first place goes to the Narrangansett Pacer, sadly now extinct.

The history of the Morgan horse dates back to 1789.

That year, the country’s Constitution came into effect. George Washington became its first President. And a foal called Figure was born in the town of West Springfield in Massachusetts.

Figure was to become the forefather of all Morgan horses. His parentage is unclear, but there are several theories. Some believe that his sire was an English Thoroughbred called True Briton. Other candidates are an imported horse called Traveller, and another Thoroughbred called Beautiful Bay.

At three years old, Figure was given to a Vermont businessman named Justin Morgan in payment for a debt.  Morgan quickly saw that his new acquisition had several distinctive characteristics.

Figure’s body was compact and muscular, his movement elegant, and he was strong and fast. He appears to have had dominant genes too, passing on those attributes to his many offspring. That meant he soon came to be in great demand as a breeding stallion.

We don’t have records for all Figure’s descendants. But three of his sons – Woodbury, Bulrush and Sherman – became the foundation stallions for the new breed. This became known as the Morgan, as a shortened form of “the Justin Morgan horse”. 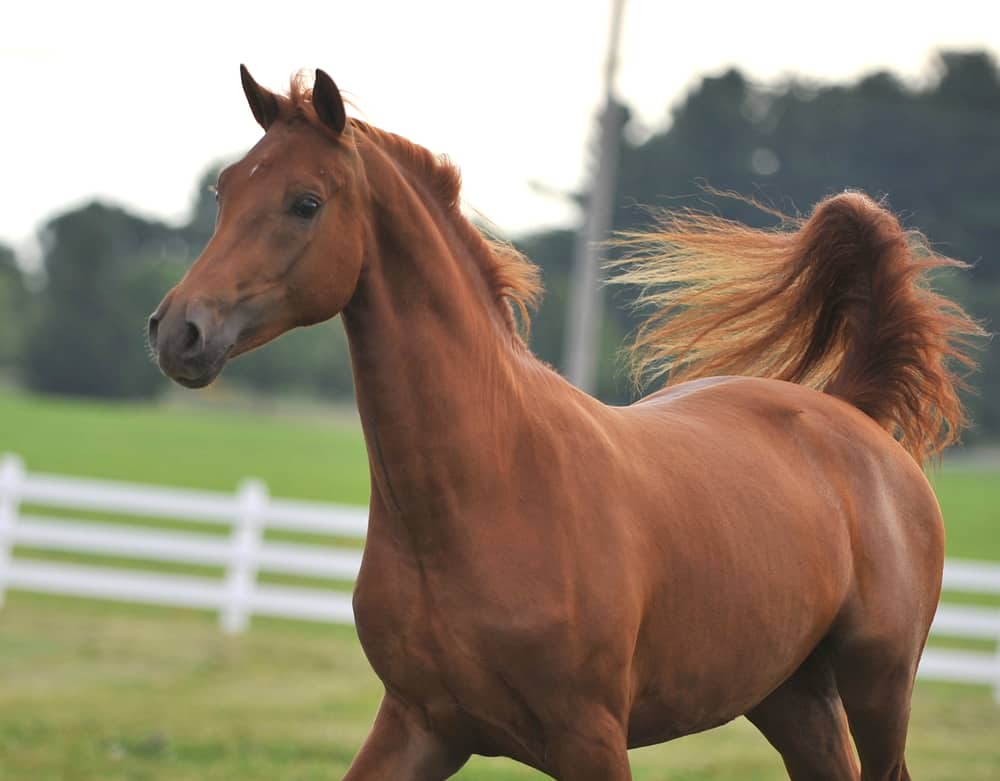 In order to be classified as a Morgan, a horse has to meet strict breed standards. These are the same, whatever the horse’s bloodlines or the discipline in which they compete.

Morgans have a straight or somewhat convex profile to the head, an upright, arched neck, wide forehead, short ears and large eyes. Their body is compact, with a relatively short back, and well-muscled hindquarters and croup.

And they can be found with coats in a wide range of colors.

Morgans are known to be easy keepers, meaning they can live on fairly meager quantities of food. And they are generally long lived. Most Morgans will live to between 20 and 30 years of age, and some can exceed this with good care.

But not all Morgans are the same. There are actually a number of different types – or families – within the breed. The four most widely recognized are the Brunk, Lippitt, Government and Working Western.

Most horses in the Lippitt family can trace their ancestry directly back to Figure. As such, they are generally considered to be the purest family. They are sadly endangered, with fewer than 1,000 Lippitts registered around the world.

Working Western Morgans were bred to work with livestock. They come from a range of different bloodlines and breeders. Working Westerns played a crucial role in opening the Western United States and developing the ranching tradition.

The biggest family is Government, and their breeding program is continued today by the University of Vermont.

Finally, the Brunk family are well known for their athleticism and good health. They take their name from an Illinois breeder named Joseph Brunk.

How are Morgans used? 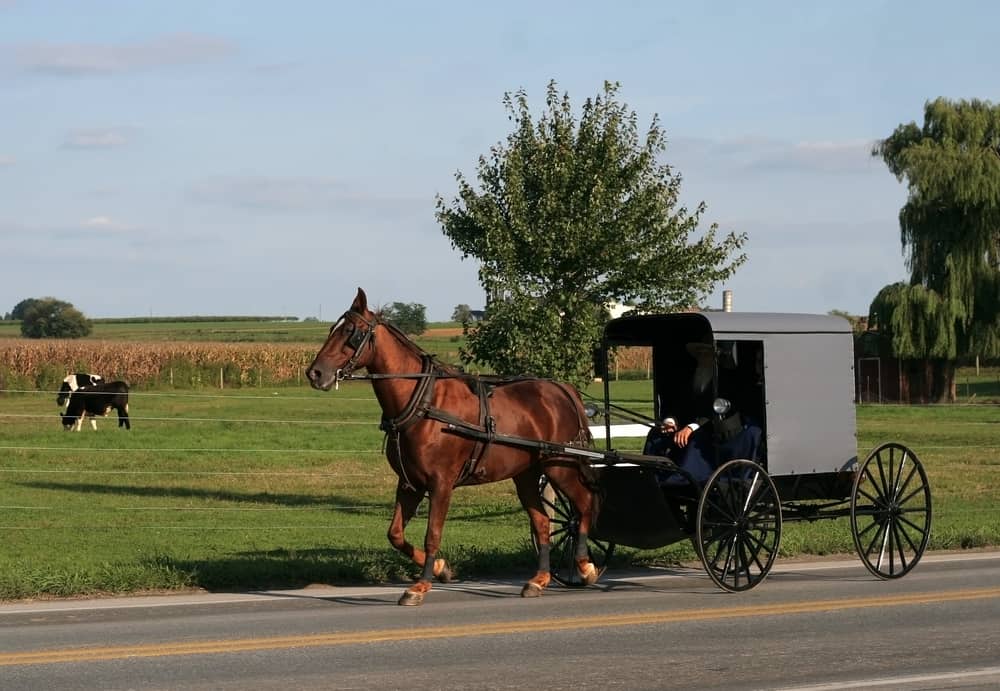 One of the defining characteristics of a Morgan is that it loves people. That’s reflected in the breed motto, “The horse that chooses you”. Their temperament makes them a great choice for riders of all skill levels, including those just starting out.

That also means they’re very popular. In 2018, there were almost 90,000 registered Morgans across the USA, with horses in every state. They’re the official state horse of both Vermont and Massachusetts. And they can be found in more than 20 countries around the world.

Their strength, speed and athleticism has seen them compete successfully in virtually every equestrian discipline. They are also used as stock horses and unusually, are a good choice for both riding and driving. Morgans represented the USA in the first ever World Pairs Driving championship.

In the American civil war, both sides used Morgans as mounts for their cavalry troops. They were also used extensively to pull carriages and by miners in the California Gold Rush.

Today, there are many events dedicated specifically to Morgans. The annual Grand National And World Championship for the breed was inaugurated in 1973, and continues to this day. Over 1,000 horses compete each year in classes including carriage driving, hunter, in-hand, Western pleasure and dressage.

Morgans are also used as therapy horses, working with riders with physical disabilities and special needs.

The Morgan as a gaited breed

A gaited horse is one that can perform a smooth-riding four-beat gait at an intermediate speed. These are usually known as “ambling gaits”. They’re quite different from the pronounced up and down motion of a classic trot, canter or gallop.

Most gaited breeds are selectively bred to develop this trait. The majority of Morgans aren’t gaited – but some are. To learn more, we need to go back in history.

In the early part of the nineteenth century, Morgans were prized for their speed at pulling carriages. Morgans with a pacing gait were considered very desirable and attracted high prices.

The trait isn’t a feature of particular families or bloodlines. However, some of today’s Morgan breeders specialize in producing gaited horses. It’s possible to find Morgans that are able to perform a pace, fox-trot, rack or other types of lateral gait.

The popularity of the Morgan horse has seen a number of organizations spring up to represent the breed. The largest is the American Morgan Horse Association, also known as the AMHA.

There’s also a National Morgan Pony Registry, which focuses on horses standing less than 14.2 hands. The ponies have the same affectionate temperament as their taller cousins, and make great riding horses for beginners of all ages.

These horses trace their ancestry back to Figure, and must not have any outcrosses after 1930. They generally have the stockier build that was common before Morgans were bred with Saddlebred horses.

In a similar vein, there are two membership clubs for Lippitt horses: the Lippitt Club and the Lippit Morgan Breeders Association. 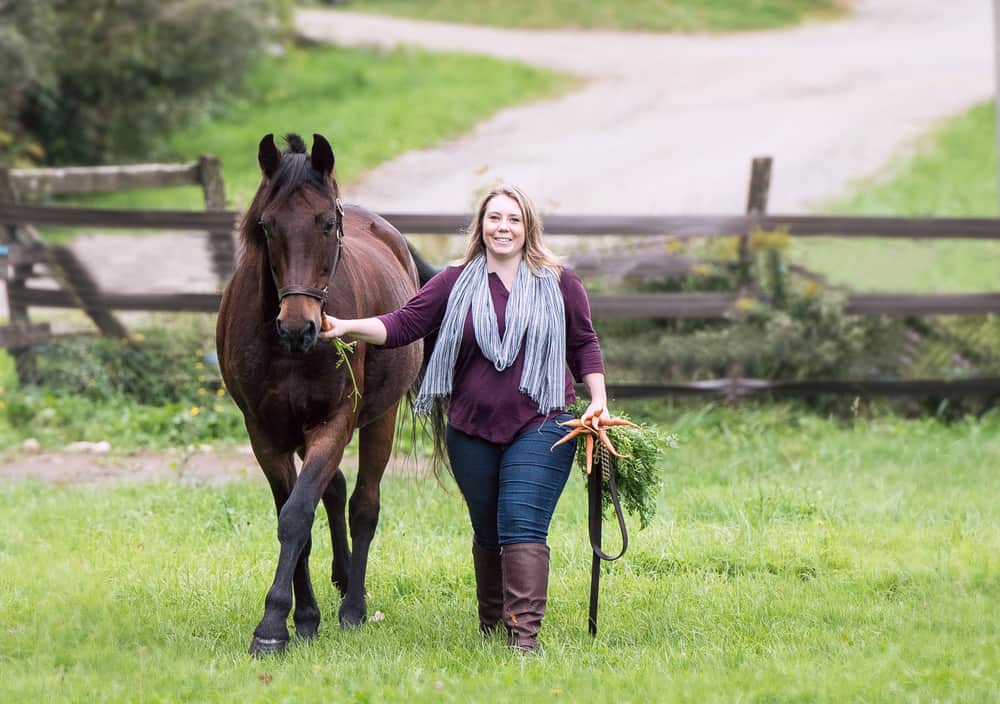 The Morgan’s treasured place in American hearts is reflected in its appearance in films and literature.

In 1972 Disney made a film about the breed’s story, Justin Morgan Had a Horse. It was based on the book of the same name by Marguerite Henry.

More recently, children’s author Ellen Field has gained critical acclaim for her stories featuring Morgan horses. One of those, Blackjack: Dreaming of a Morgan Horse, was a winner at the Children’s Choice awards in 2005.

And Morgans have appeared on screen too. One of the silver screen’s most celebrated equine actors was a black Morgan stallion called Rex. He starred in 21 films between 1924 and 1938, taking the leading role in many of them.

Morgan horses even have their very own museum, the National Museum of the Morgan Horse. Located in Middlebury, Vermont, it’s open four days a week from Wednesday through Saturday. Visitors can learn all about the history of the breed with regularly changing exhibitions.

And those looking to conduct their own research can consult the museum’s library and archives. Just make sure you contact the museum ahead of your arrival to make an appointment.

If you’re in the area, you can also take the opportunity to visit the University of Vermont’s Morgan Farm. Situated in nearby Weybridge, you can take a thirty-minute tour of the facility.

That includes the chance to view the iconic bronze statue of Figure which sits on the farmhouse lawn. The statue turns 100 in 2021, and a range of events will be taking place to celebrate the centenary.

The Morgan: an iconic American horse

That brings us to the end of our answer to the question of “What is a Morgan horse?”

For centuries, this affectionate, athletic and versatile breed has played an important role in American history and culture. From opening the Western states to starring on the silver screen, Morgans are one of our best known and most loved equine breeds.

We hope you’ve enjoyed our celebration of this wonderful horse! And if you find yourself in Vermont, why not visit the museum and find out more? Or better yet, stop by the University of Vermont’s Morgan Farm and see some of these beautiful animals close up!