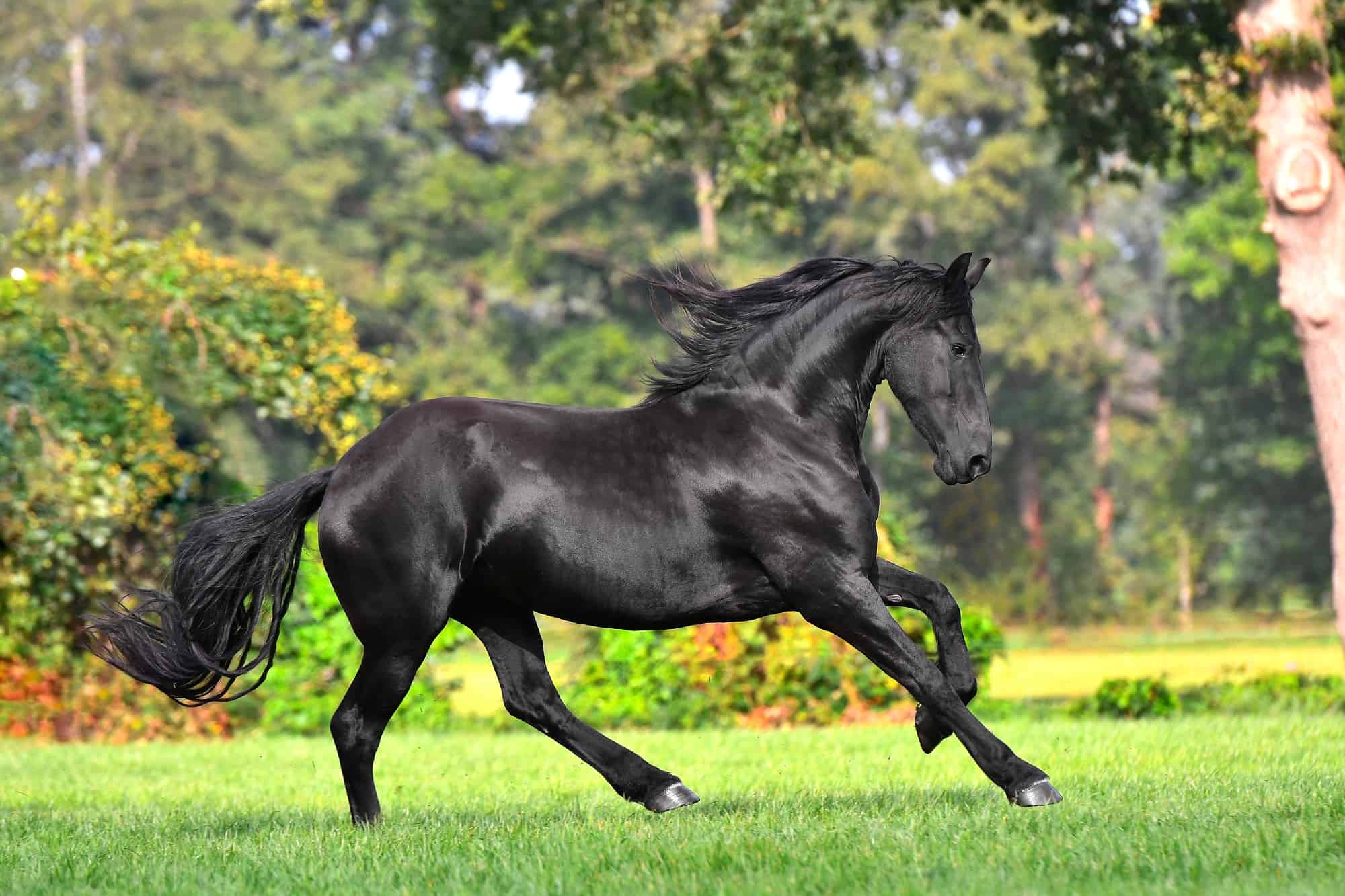 Friesian horses as some of the oldest equine breeds, having existed since 1000 B.C. They are also among the most gorgeous, with their beautiful black coat, long flowing hair, and stunning gaits leaving all those around them in awe.

Keep reading to learn more about Friesian horses, their uses, rich history, unique qualities and characteristics as well as the fascinating facts that make them special.

What Exactly Is a Friesian Horse?

The Friesian horse resembles a draught horse. The only difference? It is smaller and moves quicker and more gracefully. A draught horse is an equine whose body is built to pull heavy loads or perform hard tasks like plowing or drawing carts.

Friesians are lighter horses but they can still carry out tasks performed by the majority of draught horses. They have a likable personality and are always willing to please, which makes them easy to train and work with.

The Origin/History of the Friesian Horse 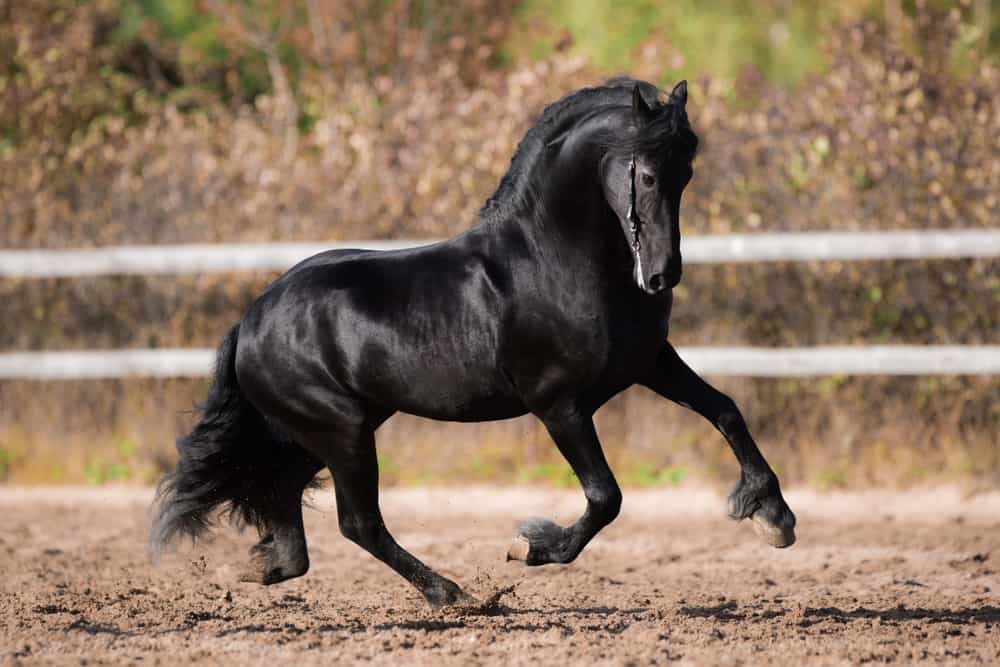 The Friesian horse came from Friesland, a province located on the northern side of the Netherlands. It is believed that the breeds that produced Friesians were used on battlefields in the 1950s to transport armored knights, as they were large and strong enough to perform this task without sacrificing agility.

As the years went by, the weapons and armor got lighter and lighter and by the 16th and 17th centuries, there was little demand for large war horses. Therefore, Arabian and Andalusian horses were bred to create a lighter horse that was more appropriate for the carriage work.

The traits of these two breeds were exhibited in the Friesian’s small head, straight, curvy neck, and high knee action. It was due to these unique characteristics that Friesians were used in riding schools and as coach horses in royal courts.

By the 18th and 19th centuries, there were Friesians everywhere. They could be seen in courts, farms, battlefields, and harness races. Friesians also graced the trotting race, a sport that was extremely popular in Holland.

But experts didn’t consider this breed of Friesians strong enough and come the end of the 19th century, attempts to go back to the pureblood stock had already begun. These efforts could also be seen in America, where most of the previous lines had become extinct due to excessive crossbreeding.

In the 20th century, the number of Friesians started to recover, thanks to a few breeders who showcased the breed’s strength and swift movements in horse shows and competitions and triggered more people to breed.

Since then, the number and popularity of Friesians have grown rapidly, and today, these horses are among the most common in dressage mounts. They are also being used to breed other horses like the Dales Pony and Fell Pony.

Physical Characteristics of a Friesian Horse 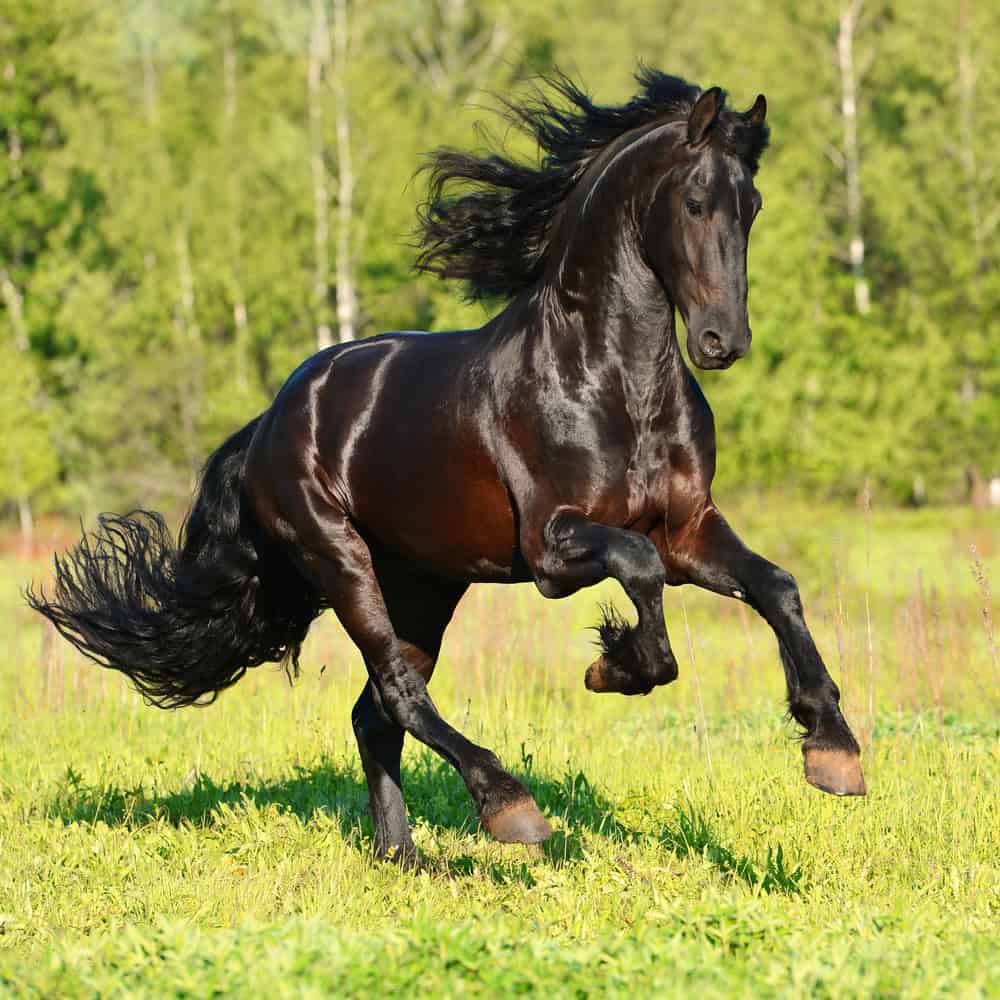 One of the most notable characteristics is color. Friesians must be black, and only a small mark is allowed on their heads. If the mark is bigger than 1.3 inches or sitting underneath the eye line, the horse will not be registered as a true Friesian. Other characteristics that set this breed apart from the rest include:

Friesians typically have a likable temperament, which is one of the reasons they are used in a wide range of settings. These horses have been found to be highly intelligent and friendly with humans, other breeds, and even other animals.

Friesians are also incredibly loyal with a calm character, making them dependable in diverse situations. They show great willingness to learn too and this makes training them effortless. 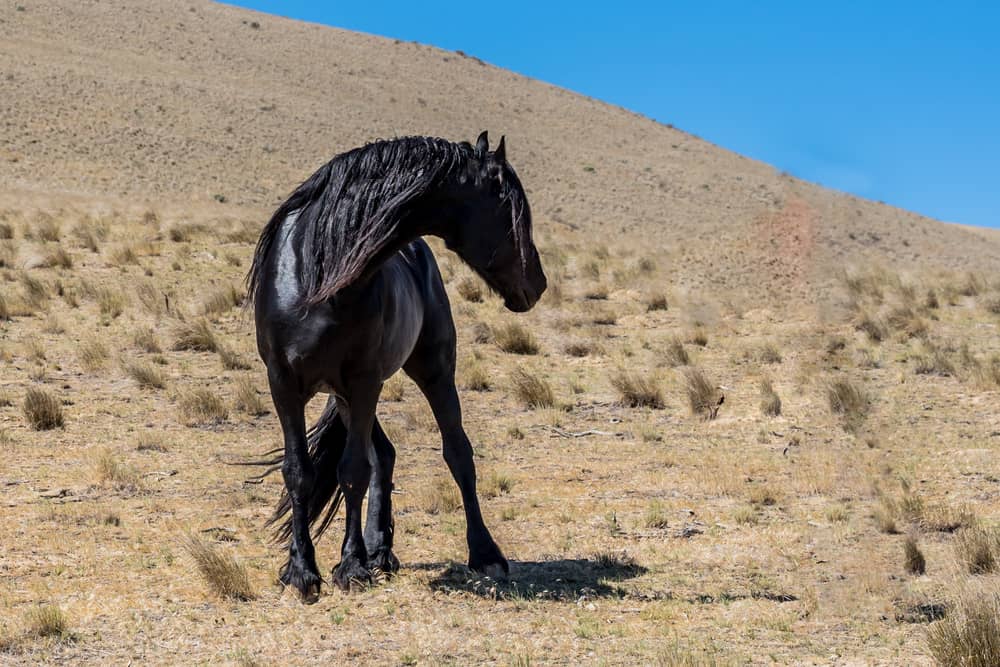 1. Friesian horses have lived in the US since the colonial days

Friesians were first introduced in North America in the 1600s, and this was just after colonies had been established. The early lands where New York currently sits were controlled by the Dutch, and they had brought trotters with them so they can monitor farm activities effectively.

2. Not all Friesian horses have a black coat

Most Friesians have an all-black coat, mane, and tail. But not all Friesians come in a black coat. There are some that are chestnut in color but are very rare.

If a Friesian stallion has a chestnut coat, it cannot be registered, as the chestnut coating is not considered a true Friesian horse trait. However, the American Friesian Association allows such horses to be registered in Fire Friesian Book, a special registry for chestnut Friesians.

3. Friesians don’t use the same carriage as any other horse

Friesians have a carriage specifically build for them. The first carriage, the Friesian Sjees, was designed in the 18th century and was basically a chair on wheels. This carriage is still used today at horse shows and festivals, with a few modifications to fit modern breeds.

Sjees are special carts. The moderns ones even have a registration number and must have twenty six measurements taken prior to registering.

Owing to their agility and suppleness, Friesians have regularly been used to develop other horses. Among the offspring of Friesians include the Fell, Dale, Morgan, Oldenburg, and the majestic Shire and Clydesdale.

The Friesian horse registry does not regard marked horses as a pure breed. They will only consider it if the mark is very small. Friesians that have a small white star on the forehead are the only breeds that can be accepted by the registry.

While most Friesians will stop growing at 15.3 hands, some stallions have been seen to go up to 17 hands in height. For a Friesian to be considered a star pedigree, it must have a minimum height of 15.2 hands.

With the increased use of cars and farm machinery, the use of horses reduced significantly and the beloved black pearls almost went extinct.

Before the First World War, it is reported that there was a time when there were only three stallions left. Oldenburgs were used to bring Friesians back.

8. Friesians have appeared in plenty of movies

Due to their stunning look, impressive stature, and scene-stealing capabilities, Friesians have become so popular in Hollywood movies and television shows including Eragon, Ladyhawke, 300, Emma, The Chronicles of Narnia, and many more.

How Friesian Horses Are Used Today

There are a number of things that make Friesians perfect for trail riding. For starters, this breed has a calm temperament, an essential trait for the unforeseen surprises that may be encountered on the trail.

They are also friendly to other horses, which is great especially when riding with friends or when on a trail where you are likely to encounter other equestrians.

In addition, Friesians have sturdy footing that provided the endurance and strength needed to complete long trail rides.

Owing to their majestic appearance and likable character, Friesians are great dressage horses. They are perfect for riders of all ages and experience levels, and can comfortably compete in both modern and classical dressage.

Also, Friesians always show the willingness to work in intense activities, which makes them ideal for the mental and physical work required in dressage.

Candidates for Movies and TV Shows

As stated, the calm personality and appealing looks of Friesians make them amazing candidates for historical and fantasy movies and TV shows. Think Alexander, Sense and Sensibility, Game of Thrones, Once Upon a Time, The Hunger Games, The Mask of Zorro… the list is endless!

Since Friesians can be trained to pull even the hardest of stunts with ease, they have been making appearances in circuses since the 1930s.

Friesian horses are built for the strength and fortitude required to pull heavy loads. Because of this, they were one of the most reliable means of transportation in ancient times.

However, with industrial evolution bringing more advanced means of transportation, using horses to pull heavy loads is not as popular as it used to be. But some parts of the world are still using Friesians to pull carriages as a faster alternative to wheelbarrows.

As mentioned earlier, Friesians are typically draught horses, which means they can take up heavy work and do it well.

However, like pulling carts, the use of Friesians for farm work has reduced considerably. But small farms still embrace this eco-friendly alternative to tractors. Horses bred for farm work or harness work are relatively larger.

Jumping is not really one of the activities Friesian horses are good at, but some riders have succeeded in training their Friesian breeds to jump and pull other stunts for pleasure purposes. 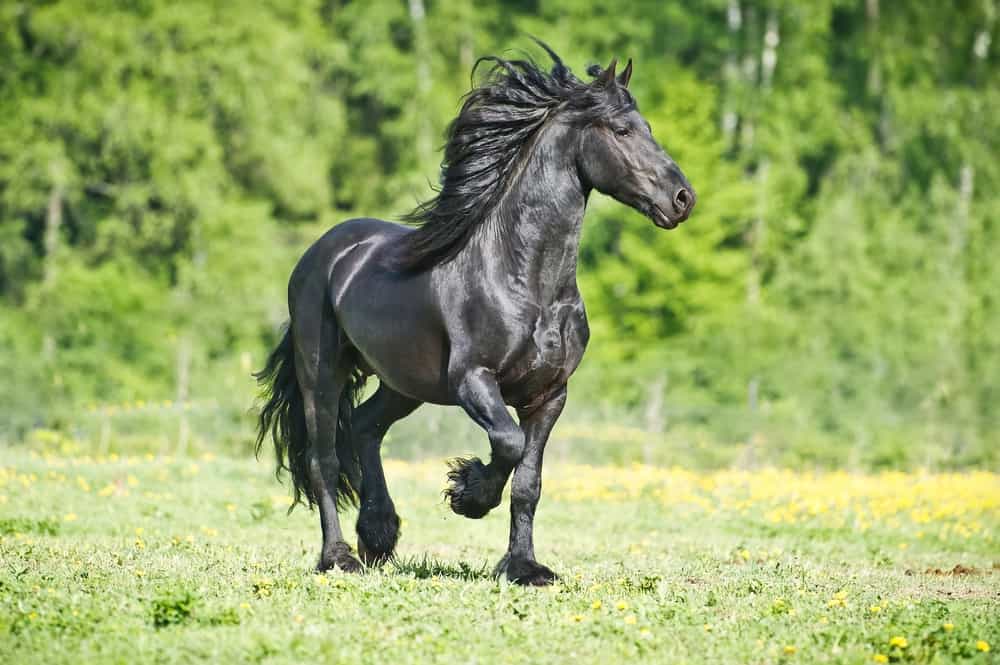 One of the factors to consider when buying a Friesian horse is its life expectancy. While this breed certainly ranks among the most versatile and likable, it doesn’t live as long as other breeds.

Most Friesians live for 15 to 17 years, which is a shorter time compared to breeds like the Shire or Clydesdale that can live up to 30 years.

Of course, this is just the estimated average. There are some Friesians that have been reported to live for more than 17 years, with some even going up to 20 years. It all depends on the overall health and genetics of the horse.

Also, because of how Friesians are built, experts recommend riding them from when they are about 5 years. This gives the horse’s legs enough time to develop and get strong, which helps prevent potential injuries and other health conditions. It also increases its lifespan.

One of the most common health problems affecting Friesians is colic, a condition preventing the digestive system to do its job properly. Colic may result in severe intestinal disorders and should not be ignored. It is recommended that you talk to a veterinary specialist if you suspect your horse has this condition.

Due to inbreeding, purebred Friesians may also suffer from genetic diseases like:

In addition, Friesians are overly sensitive horses and will suffer when presented with situations that cause anxiety. Promoting positive activities and allowing your horse to interact with other breeds is one of the ways you can prevent your Friesians from stress. It is also important to make sure that the horse is healthy and fed properly.

Taking proper care of your Friesian horse can help keep it in shape and maximize its lifespan.   One way to do this is by scheduling regular veterinary visits.

Have your horse checked every 6 to 12 months. A vet will help you identify ailments early enough and address them before they escalate to something deadly.

Make sure you are following the vaccination schedule set by the vet, you are deworming the horse periodically, and you are providing any other care suggested to keep the animal healthy.

There you have it; everything you need to know about Friesian horses. If you have any questions regarding these beautiful black gems, feel free to ask in the comments.