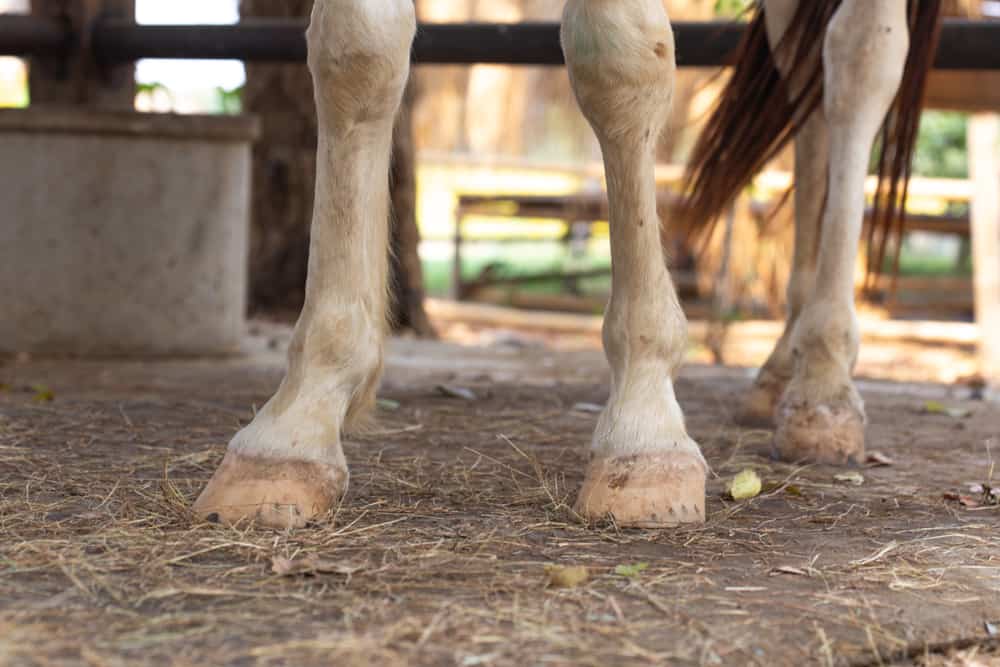 Horse coats are described using strange-sounding words like roan, bay, pinto, or chestnut. And anyone who knows horses gets an instant mental picture when they hear those words. But chestnut has a different meaning too, so what are chestnuts on horses? We’re going to look into what they are, how they form, what their purpose is, and how to control them.

The Definition of Chestnuts on Horses

If you have pets or have ever worked with animals, you may have noticed their toes, claws, or paws. Most pets have four or five, but herbivores seem to have a single solid footpad instead. Did you know that hoof is an evolved version of their biggest toe? And that they have more?

On many of these animals, their ‘extra toes’ changed but didn’t disappear completely. You might see a nub at the back of your cat or dog’s foot. That used to be a toe. On horses, these ‘vestigial toes’ sit a lot closer to their knees. Along those lines, what are chestnuts on horses?

You might hear about a similar horse feature called an ergot. It’s made of the same gel-like material as chestnuts, but you’ll find them lower down the horse. Ergots usually grow at the back lower leg of the horse, near its ‘ankle’. They’re mostly found on horses with feathering. Feathers are those fine hairs that grow on the lower legs and feet of some horse breeds. They’re not the same as fetlocks, which are hairy tufts at the back of the hoof. Feathers go all around the lower leg, and you’ll mostly find them on heavily built draft horses with stocky bodies.

Do Feathers Cause Ergots and Chestnuts?

No. Curiously, if your horse has fetlocks but no feathers, you can find ergots hiding inside the fetlock as well. It’s not clear what chestnuts and ergots do for horses exactly. They don’t seem to have a practical purpose. Scientists think ergots and chestnuts are ‘leftover horse toes’.

Ergots often get thicker and knobbier than horse chestnuts because they’re hidden behind the fetlocks or feathers. The name ergot itself comes from the French word argot, which means cock(erel) spur. Ergots grow in the same position as the spurs at the back of a rooster’s leg.

Anecdotally, a horse might use their chestnuts to scratch an itchy nose or face by rubbing its head against the rough surface. And we sometimes think ergots work with feathers and fluffy fetlocks. They serve as a barrier to push excess water away from the horse’s hooves.

The ergot is also said to anchor the ergot ligaments of a horse. This isn’t a problem though, since even if you trim off the projections of the ergot, the inner core stays attached to the horse’s joint. So it can still function as a supportive structure for the tendons down there.

Based on fossils and scientific studies, horses had an ancestor called the eohippus validus or dawn horse. It’s a transliteration of their scientific name – eos means dawn and hippos means horse. Yes, hippos are often called water horses or river horses, that’s no coincidence!

Dawn horses were much smaller than modern-day horses, but though they went extinct millions of years ago, they share many genetic features with contemporary horses. They had a hump and were about the size of a dog, with dark fur that lightened around their barrel.

These ancient horses had four toes on their front legs and three toes on their back legs. Scientists think it’s those extra toes that eventually became ergots and chestnuts. Although these scabs grow continuously, you won’t need to trim them every time you visit the farrier. 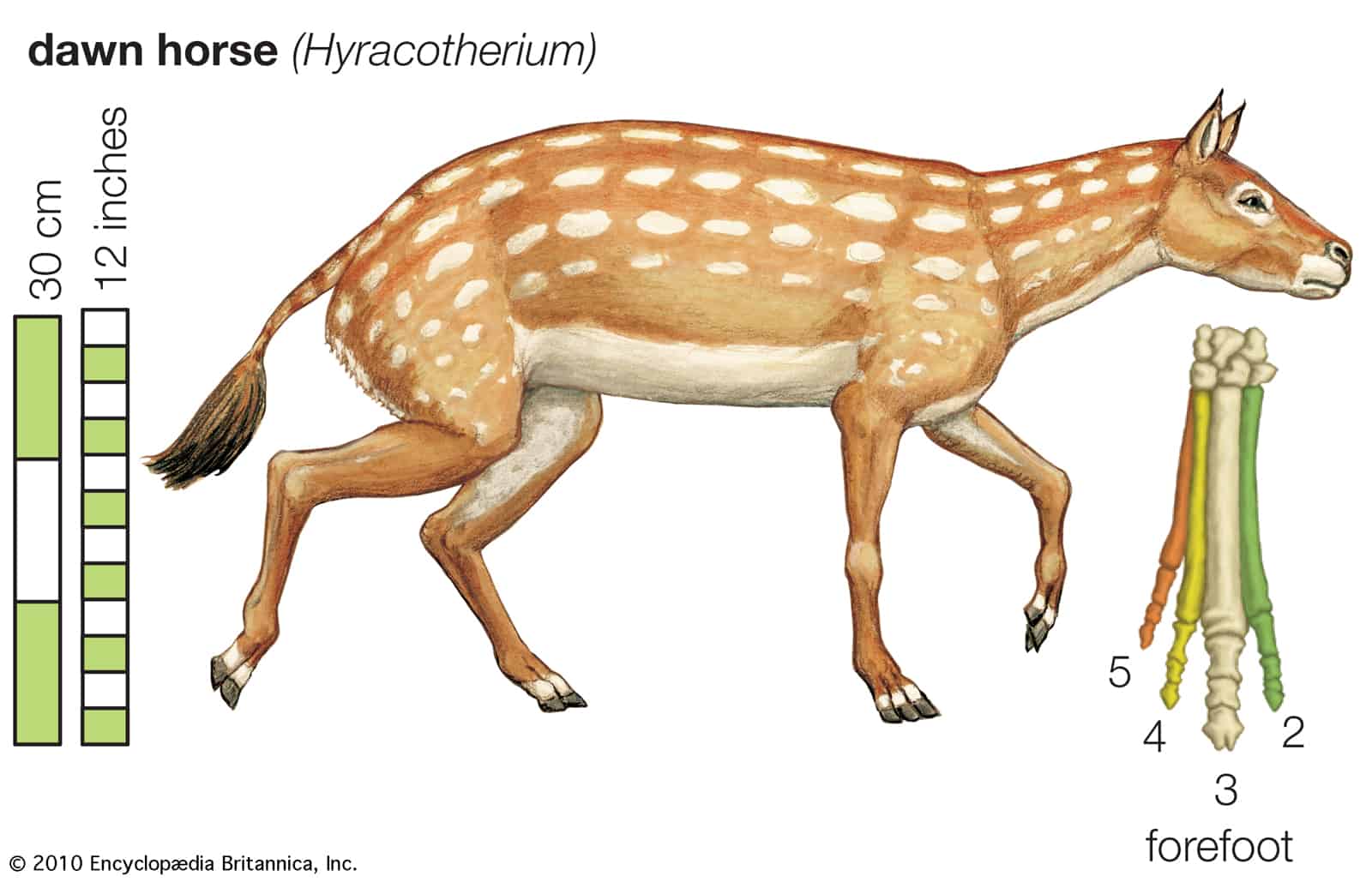 If you don’t pay attention to the ergots and chestnuts, they will eventually fall off on their own. They have a crumbly, flaky texture that develops in layers, so as fresh layers form on the horse’s leg, the outer ones slip off. But many owners dislike how they look so they cut.

Assuming you haven’t trimmed these horse chestnuts or ergots in a while, they may protrude and stand out. If you bother them in that state, they’re more likely to irritate the horse. So while shorter, flatter ones can be scratched off by hand, longer ones should be moistened.

You can pick at the chestnuts and ergots after your horse has had a bath because they’ll be softer and easier to manage. Or you can oil the scab overnight if you plan to peel them in the morning. If a farrier is trimming for you, they’ll use sharp tools so you don’t need to prep.

Do You Have to Remove Chestnuts?

They don’t seem to serve any practical purpose, so what are chestnuts on horses for? Some people thought they helped with night vision – hence the nickname ‘night eyes’. Others think they could be scent glands, and that carrying them in your pocket gives you special powers.

That rumor implies that when the horse smells his/her chestnuts on you, they’ll think you’re a horse too because you have the same scent. This might make you a better horse whisperer and make the horse more likely to bond with you and follow your instructions.

Ranchers and farriers (horse groomers) often remove chestnuts, but you don’t have to. They don’t disturb the horse, so we mostly remove them because they look strange and some of us think they’re ugly. Your farrier can take off the chestnuts and ergots during your hoof trim.

Ideally, a horse should be getting its hooves trimmed and shoed every six to twelve weeks for healthy feet. Equine pedicures keep their feet balanced, which avoids injury and lowers infections like white line or laminitis. Trimming reduces the chances of degloving as well.

According to scientific theory, the hoof, chestnut, and ergot are what remain from the three toes of old horse-like creatures. The front toe evolved into a hardened, perfectly balanced surface that makes horses fast, accurate, and graceful when they move. It absorbs shock too!

And while you might worry about the appearance of ergots and chestnuts, they’re completely benign. They may look like raw, crusty wounds, but they’re not sore or painful. They’re not signs of any illness or infection symptoms. They’re normal, though not all horses have them.

Here’s something to note – horse chestnut sometimes refers to a plant that’s thought to have medicinal properties in the holistic healing space. It’s similar to a conker and is completely different from evolved horse toes. So don’t grind the gelatin from your horse into a tonic!

How to Remove Chestnuts and Ergots

It’s fairly easy to get rid of chestnuts and ergots on horses. You could do it at home or outsource the task. Here are a few common techniques for controlling chestnuts on horses.

Curiously, horse chestnuts and ergots are re-used in some parts of the world. In Colombia, ergots, chestnuts, and similar gelatin from cow hooves are used to make candy. It’s called gelatina de pata (paws), pronounced ‘helatina’, and is mixed with vanilla and sugarcane.

Don’t worry, it doesn’t taste anything like a horse. Since removing chestnuts and ergots doesn’t hurt the horse, it might be kosher for vegetarians or vegans that aren’t as strict. But most will stay away from it for ethical reasons because this sweet taffy candy is still an animal product.

How to Use Chestnuts and Ergots from Horses

Sometimes, old wives’ tales have a touch of truth in them. So while legends about chestnuts and ergots can seem silly and trite, they’re relatively benign, so there’s no harm in experimenting. But what are chestnuts in horses used for? Here are a few suggestions to try.

As you test these theories and ideas, your guiding principle should be the safety of the horse. Never try anything that harms or irritates the horse, and only do this with experts or a horse you know and trust. That way, you can read the horse’s cues accurately and stop if needed.

Do Chestnuts on Horses Need a Vet?

We’ve seen that ergots and chestnuts are normal parts of a horse’s body. But because horses have such smooth and distinct coats, any bare patch of flesh can seem worrying. You should already be inspecting your horses every day, particularly their noses, ears, limbs, and feet.

The aim is to catch any problems early and ensure the horse is comfortable. So as you pick out sticks and stones from their hooves, look at the ergots and chestnuts. If they’re groomed, they should have a flat, dry, flaky appearance. They should never be moist, wet, or fresh.

If the bare skin looks or feels dewy, it may be an injury or a bite. The spot should never be raw or bloody, even if the horse has been bugging it. So if there’s any open wound or if the flesh seems damaged, call a vet just to be sure. But if it’s just dry and scraggy, get the farrier.

You should always observe how your horses are moving their legs. They’re likely to twitch if you touch their chestnuts or ergots, but only you can tell if the horse is surprised, mildly irritated, or in pain. If they’re favoring a leg with ergots or chestnuts, ask the vet to check.

Sometimes, if you’ve had a rough day or your horse is feeling testy, you may tug a chestnut or ergot too hard or cut too deep. Especially if you’re using a sharp razor or if you’re not used to handling pincers. Don’t panic. Soothe and calm your horse, then disinfect the open wound.

You can place a loose gauze or bandage over the broken skin to keep out dirt and germs. You should then call the vet. They’ll need to examine the horse and explore the wound. They may prescribe meds and check if an infection or some unrelated condition triggered the bleeding.

A Footnote on Chestnuts in Horses

If you read nothing else, here’s what you need to know about chestnuts in horses.

Have you spotted chestnuts on your horses? Share photos in the comments before you trim!