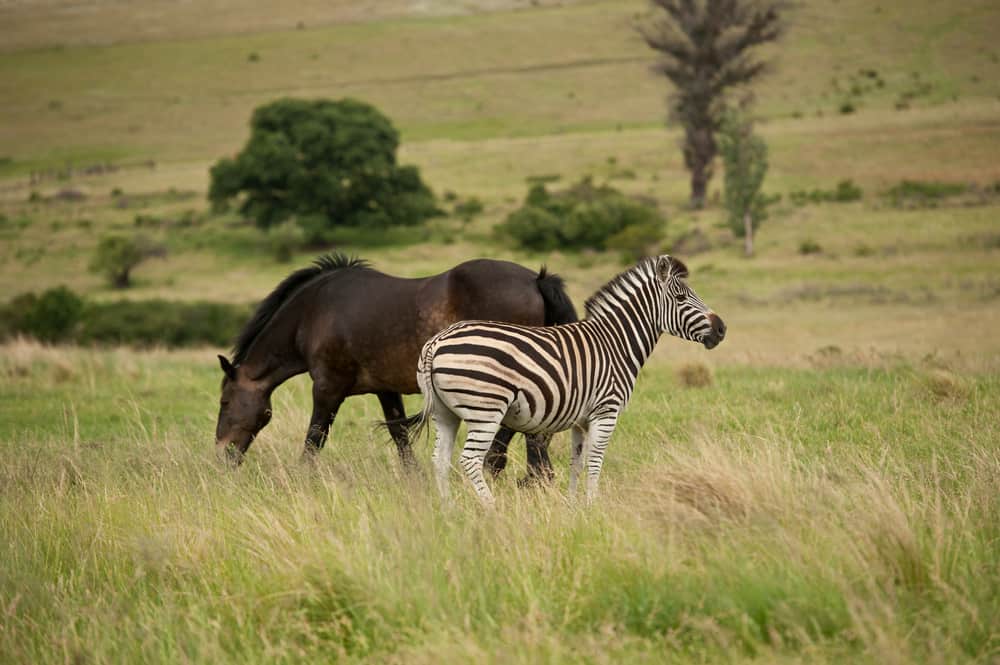 Zebras, tigers, giraffes, and leopards are some of the most recognizable animals on the planet. Which is ironic in a sense, because those beautiful body patterns are intended to camouflage the creature! But pretty prints aside, we want to look at zebra vs horse: can you ride a zebra like a horse? Petting zoos and exotic conservatories have some ideas, so let’s see!

If you know anything about mustangs, brumbies, and other free-range horses, you know how hard they can be to break in. And these are feral ones, meaning their (great-grand) parents were domesticated. Yet their wild genes make them difficult to manage and tough to tame.

Why? Well, riding a horse isn’t just about putting a saddle on it. Over the centuries, humans made horses suitable for riding by breeding them. We didn’t just teach them to live in sheds and eat grains instead of grass. We also purposely mixed their family genes and characters.

We raised and reared horses that were gentler, milder, more obedient, and more trainable. So it’s not just their bodies that are good for riding – their personalities are designed that way too. You can’t just grab any wild animal and ride it. You need selective gene editing.

While our focus here is on zebras, we can look at things from the other side as well. Horses – unlike zebras – have a skeletal and ligament structure that makes them easier to ride. Their backs are longer and more stable, their stride is steadier, and they readily cooperate with us.

As far as we can tell, horses first evolved in Eurasia, and there’s still a big horse culture there. They were first domesticated in Central Asia, around what we now call Kazakhstan. North America had native horses too, but they died out in the 15th Century and were later replaced.

Horses in the USA 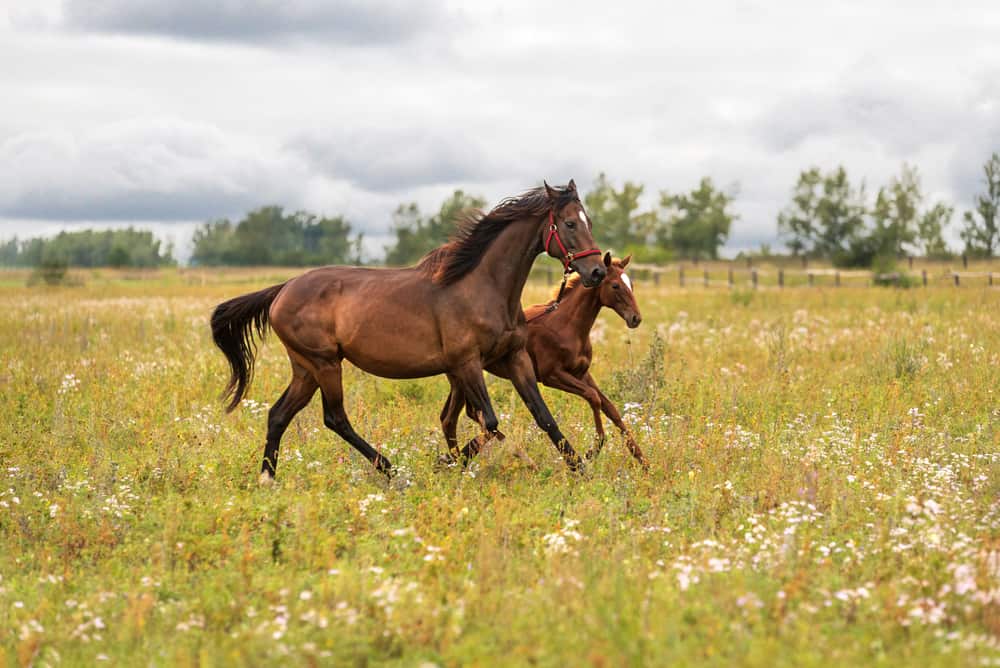 These new ‘American horses’ were brought by conquistadors from Spain, and they’ve now grown into a vibrant population of mustangs and homesteading horse varieties. Today’s domesticated equines include mixed breeds with European, Asian, and Arabian imports.

But we think the ancient Kazakh communities of Yamnaya and Botai were among the first to domesticate horses, first for food and later for work and travel. Just like other rearers and cowboys, they bred horses to be obedient and pliable with dipped backs and graceful necks.

These features help the horse breathe better so you can ride them longer, and the back shape makes it easier for humans to ride, with or without a saddle. They went on longer rides than donkeys and mules. Their enhanced balance meant you could use your hands while riding.

This made horses useful for sports, cattle-wrangling, and even war, which their equine cousins couldn’t manage. Plus, Americans have a social and cultural attachment to horses. We see them as a symbol of our pioneering spirit – they helped us tame the Wild West!

Throughout history (and even in modern times), humans have tried to ride all sorts of animals including turkeys, tortoises, ostriches, camels, elephants, yaks, bulls, and goats. We’re particularly drawn to horse-adjacent creatures like mules, donkeys, and zebras.

Zebras seem like wild, striped mustangs, so it makes sense we’d want to mount them. But while horses have no natural predators (unless you count humans), zebras have evolved antsy instincts and a powerful kick to fight off lions, cheetahs, and other savannah cats.

This means they’re less likely to stay calm enough for us to ride them longer than a few minutes. And if they happen to rear or kick, your injuries will be lethal, possibly fatal. There’s a more practical reason too. Because we haven’t domesticated zebras, they haven’t adapted.

While horses have lived with humans from as far back as 3,500BC, zebras have only seen us as hunter-gatherers or zoo visitors. Their bodies haven’t adjusted to human harnesses, their backs haven’t evolved for human mounting, and their digestive systems don’t suit cereals.

And since we can’t house zebras in stables, feed them on grains and supplements, or medicate them like we do with horses, we can’t train them the same way as horses. They can’t learn to hop, amble, canter, trot, or respond to standard crops, reins, and saddles.

Zebras also lack the social character to be domesticated. Yes, they hang out in herds, but apart from mamas and their babies, zebras aren’t generally as protective as horses. You can probably tame a zebra to do circus tricks, but you can’t breed them for long-term riding.

Why Can’t You Domesticate Zebras?

You may have heard that every zebra has a unique stripe pattern, almost like a fingerprint. Their weight distribution differs from horses, and even their necks are thicker, so they respond less readily to reins and bridles. Why else can’t you teach zebras to pull your cart?

All that said, you can probably tame one zebra enough to ride or pull a wagon. If you have the money. But the general public – and even the most experienced jockeys – can’t just walk up to a zebra and try to mount it like you would with a horse. The zebra might break your jaw!

How to Ride a Horse 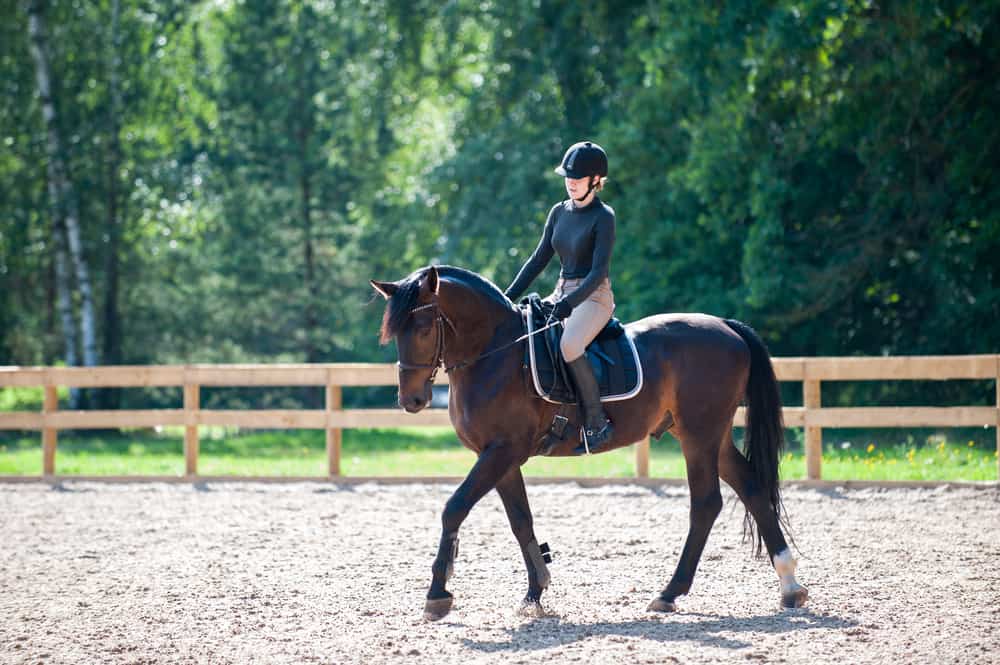 While horses and zebras are related, zebra stripes are a large distinguishing factor. The stripes are thought to help them regulate their body temperature and avoid predatory bugs. Some feral horses have similar stripe patterns on their legs, particularly Kiger Mustangs.

But horses are amicable. We’ve curated their genes and personalities for riding. Their intrinsic social hierarchy allows them to see you – a human – as their master (or mistress), meaning you can control them and train enough to safely ride them. They even do tricks and sports!

If you’d like to ride a horse, it’s best to work with a teacher that will show you how to hold your body, correct your stance, and teach you to communicate with the horse. Certain horse breeds are better for beginners and youngsters. They have calmer natures and are friendlier.

You’ll need the right kind of saddle – whether it’s a stock saddle or an English one. You can also get a saddle for a particular sport like polo or dressage. Your trainer can advise you on what to use. You’ll also need a solid pair of riding boots and a protective riding helmet.

You can ride in any type of clothing, but denim and khaki are helpful because they’re tough enough to withstand the friction between your inner thighs and the body of the horse. You’re less likely to chafe or bruise that way. Practice rocking your hips in the rhythm of your horse.

How to Ride a Zebra

The Canterbury Park races are always entertaining. Justine Klaiber is a million-dollar jockey, but even outside of her success on horses, she’s has a gift for racing ostriches and zebras. As the earlier video shows, the answer to, ‘Can you ride zebras like horses’ is a resounding NO!

You can try it in spurts, but you won’t get far before you buck. It seems the first rule of riding a zebra (or ostrich or camel) is to give it a punny name. The Canterbury racers include such gems as Alexander Camelton, Mark my Bird, Jay-Zee, Donald Hump, and Earn My Stripes.

If you’d like to ride a zebra, you can find an already tamed one at a petting zoo, circus, or animal rescue shelter. The staff can carefully saddle the zebra and help you ride it for a few minutes. They’ll give you a zebra they give that’s gentle enough not to kick or bite you.

You can also look for a Hollywood-trained zebra if you desperately want to ride. (And if you can afford it!) Sam and Daisy are two top animal actors best known for their shared role as the speeding zebra in the movie Racing Stripes. Ironically, celebrity zebras are friendlier.

Of course, if you’re an animal expert, you can feasibly ride any zebra. Ivan Peeters trains horses professionally and tours Europe with his trick troupe. When he bought a zebra from the zoo, it still took him several years to train it. And even then, he mostly rides in a harness.

Apart from Ivan and the Baron (Walter Rothschild II), other people who have successfully ridden zebras include Osa Johnson, Bill Turner, a teen Shea Inman, and Horace Hayes. He trained one for his wife Alice, but she found the striped steed ‘too headstrong for a lady.’

If you ever do manage to ride a zebra, watch it closely. If it bends its head and peers between its front legs, run! That pose is the zebra’s bucking stance. Peeking between its legs helps it aim accurately, and once it launches both its rear legs in unison, those kicks rarely miss!

Should We Ride Zebras? 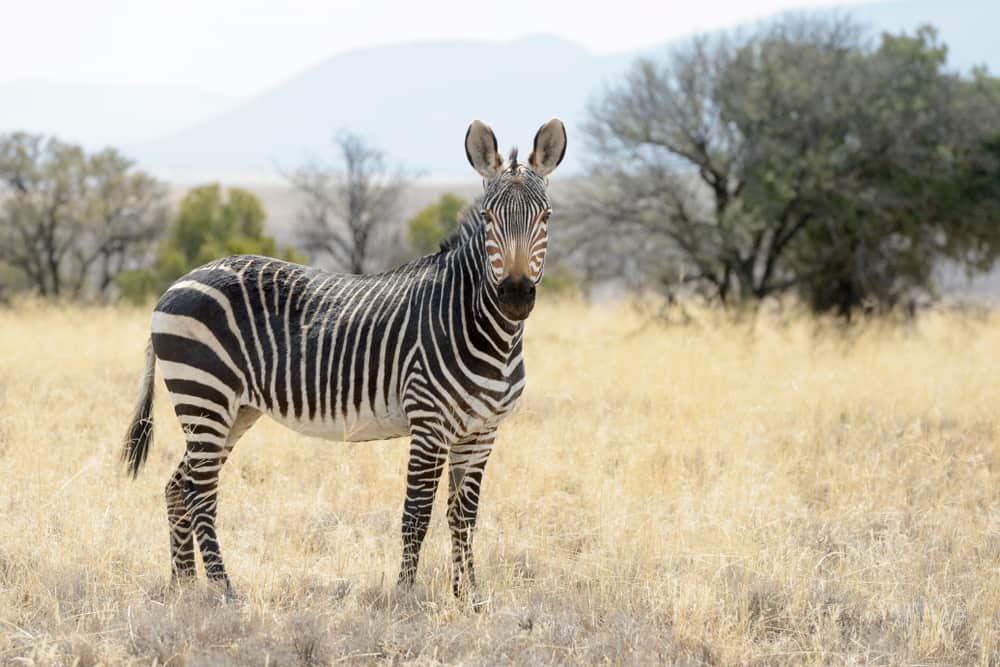 Humanity has a bit of a curiosity problem. We worry so much about whether we can do something and not enough about whether we should. As it turns, western visitors have often tried to tame zebras. Especially in colonial times when horses often died from local diseases.

Imported horses were particularly susceptible to tsetse flies. The local zebra population could withstand the bites better, partially because their stripes made it harder for the flies to target the zebras accurately. But the naturally nervous, hostile nature of zebras was a challenge.

Also, while horses can carry humans (and heavy loads), zebras aren’t as useful on farms. So while a few zebras have been successfully bridled and ridden, this often involves breaking its spirit and altering its intrinsic temperament. That seems unkind and somewhat inhumane.

Taming mustangs and domesticating horses is both practical and commercially viable. Doing the same to zebras can only ever be a vanity project. Zebras have a closer kinship to donkeys than horses – both in their physique and their nature. And we’re not rushing to ride mules!

Of course – their stripes make them much prettier than their pack-carrying relatives. But this is a survival thing. When zebras are hanging out in a crowd, their attackers can’t easily spot or identify an individual to chase. They just see a moving mass of black-and-white lines!

And if the zebra is standing still, a predator can’t tell it apart from the long, stationary stalks of grass in the savannah. It helps that lions – the zebra’s keenest predators – are thought to be color-blind. (Hence the black-and-white?) But lions do see color, just in limited ranges.

No, you can’t ride zebras like horses, and here are a few reasons why not:

Have you tried riding a zebra? Tell us how that worked out for you in the comments section!