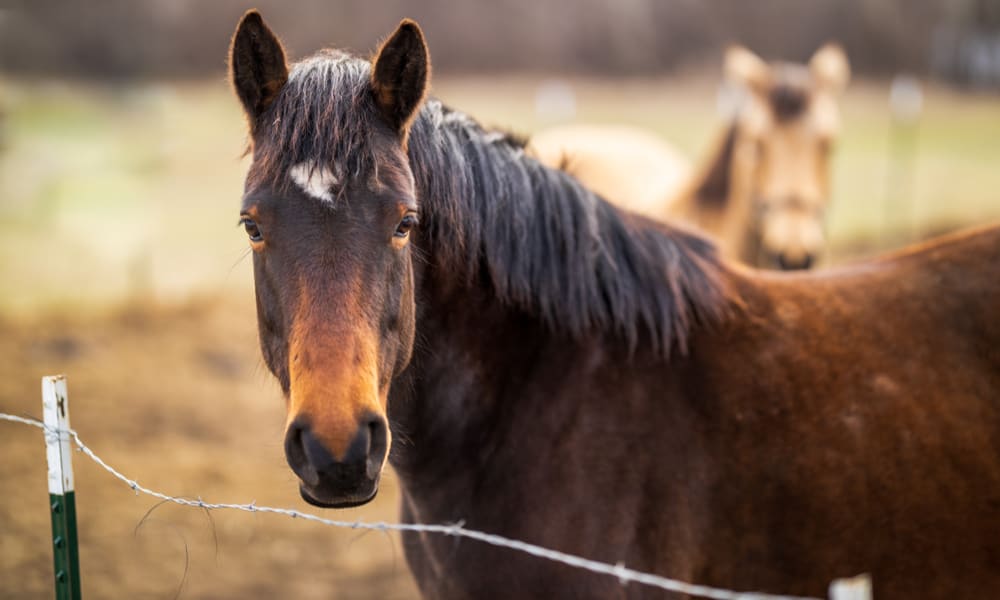 Did you know that horses symbolize character traits like beauty, strength, courage, and endurance throughout many countries worldwide? They have been the backbone (quite literally) that have advanced entire civilizations and empires.

There is clear evidence that the original horse species came into existence approximately 55 million years ago; however, history tells us that people began to domesticate the contemporary horse about 6,000 years ago.

Thus, these odd-number hoofed mammals now faithfully accompany their human companions in uniform, perform in international competitions, and continue to be an old-fashioned pastime for riding enthusiasts.

These beauties have a long list of peculiar and uniquely exciting traits, but let’s look at 10 Fun Facts About Horses that you may have never known. 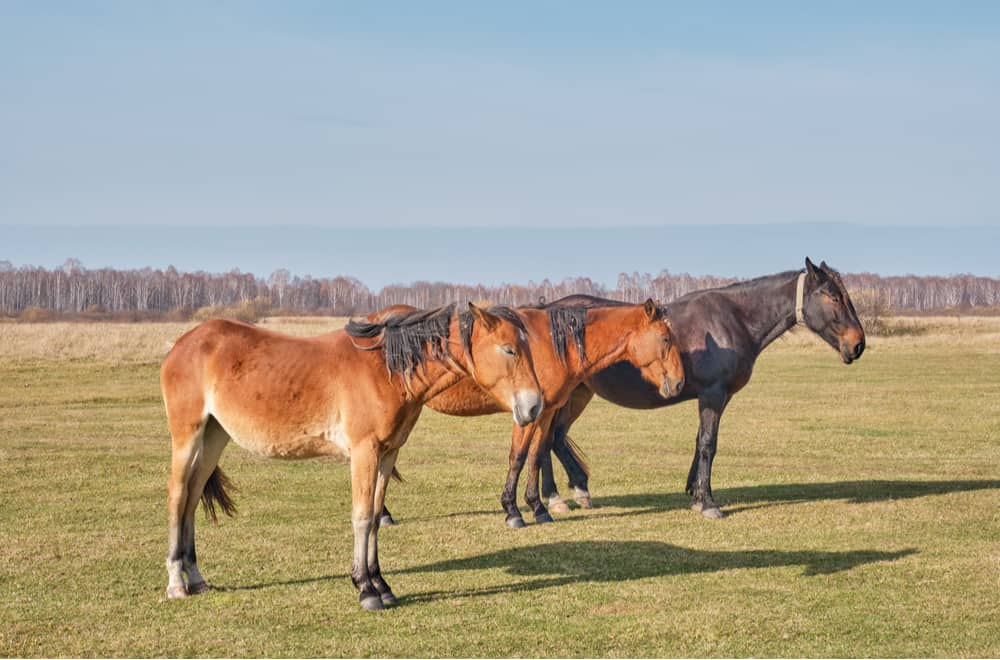 A horse has more in common with a flamingo than you would think. Britannica cites that these creatures have a unique feature enabling them to lock their legs. Because of this, horses can sleep standing up.

They may lay down for periods of deep sleep, which usually will amount to a few hours per day. Then, when they activate their leg-locking feature, they can reduce muscle fatigue and take periodic rests between grazing sessions while remaining in a flight position.

Some people think that horses adapted this unique trait to defend themselves from predators in the wild. But, most likely, this is because horses are pretty vulnerable in the prone position. 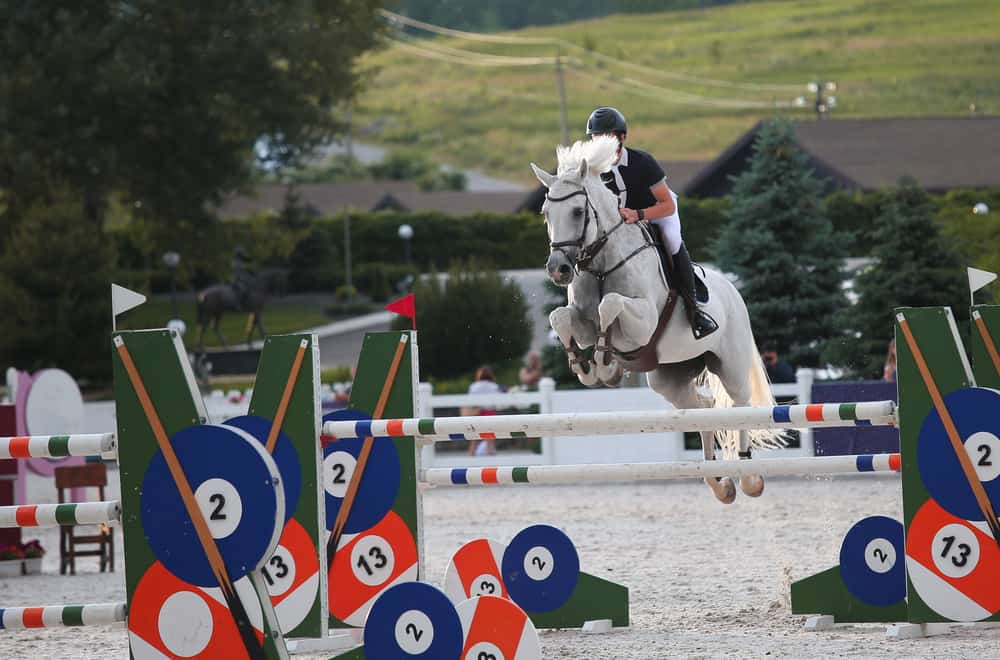 Many of us tend to think that the size of an animal’s brain directly reflects its level of intelligence. However, we should investigate this further and not underestimate the animals that we cohabitate within this small world.

Researchers of the Equine Behavioral Health Resource Center note that the size of the equine brain is about the size of a grapefruit. While that is an interesting visual to have, size is not everything.

Horses must learn instinctually to protect themselves from predators in the wild; their brains function in a way that provides quick reflexes and responses in survival fight or flight situations.

Even though humans can use deductive reasoning to work through a scenario, horses use more dynamic responses based on actions, behaviors, and associated stimuli.

In both cases, the human and equine brains have cognitive abilities well suited to their design and function. 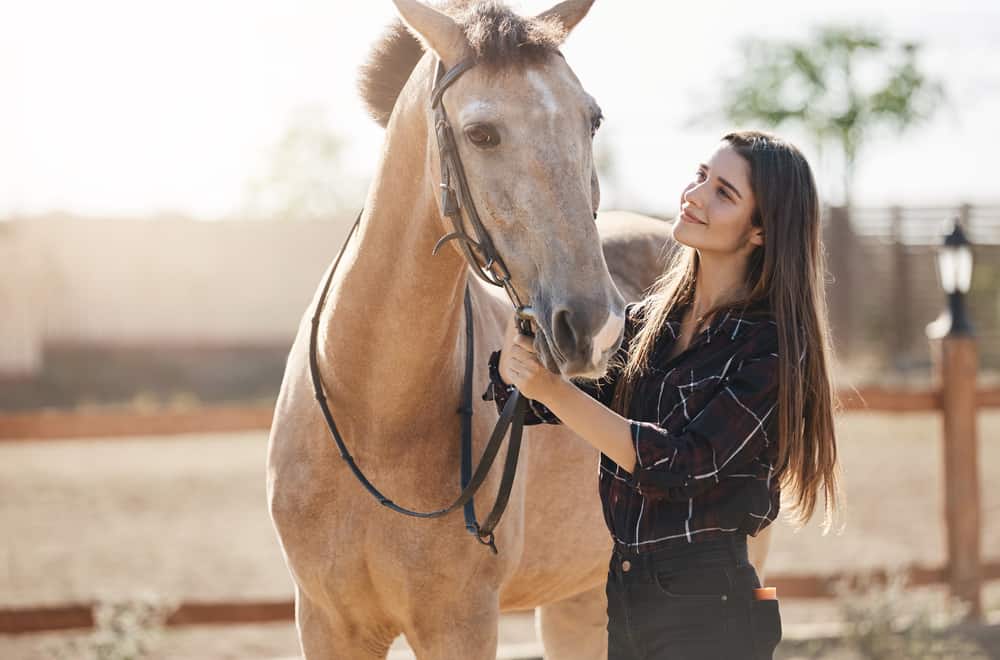 Horses boast a nearly 360-degree field of vision due to the unique positioning of their eyes. However, these animals suffer from two blind spots: one directly behind it and the other at the base of its muzzle.

For this reason, mother nature has worked its magic again. Horses have adapted sensory hairs such as whiskers around their muzzle to help them feel around for their food.

A horse can also use its sense of smell to decipher what type of food you place before it. That’s why you will notice a horse sometimes turn its head as you approach it because it is trying to see you.

These hairs are vital to the horse’s adaptation, so much that the British Horse Society recognizes sensory hairs as “an important sensory organ for the horse [that] should not be removed for cosmetic purposes.”

So please, do not book your horse an appointment at the barbershop this Christmas. 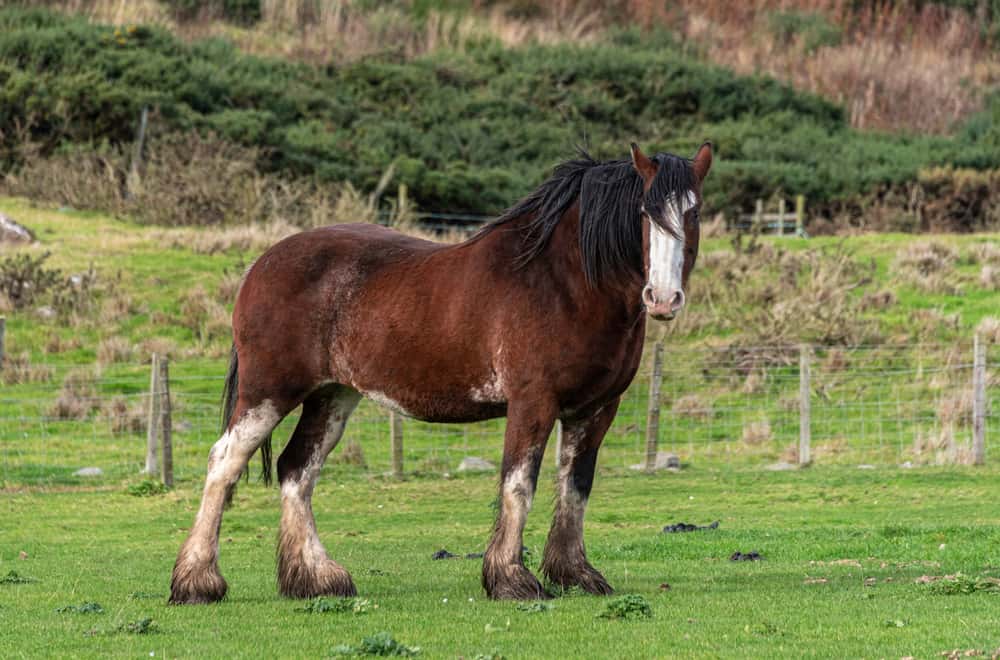 In addition to whiskers, specific breeds of horses have the predisposition of having additional hair genes in their DNA, resulting in a rather flashy mustache during the cold season.

The extra hair genes are not location restricted, so horses with excess hair genes may have also don hairy bellies, feather hooves, and extra-long hair on their lower limbs.

A BestHorseRider article recognizes that hair genes are most evident in hairy breeds like Clydesdales, Gypsy Vanners, and Shires. People among the equestrian community will commonly refer to these particular breeds of horses as draft horses.

Draft horses are both strong and intelligent and usually meet particular build and weight requirements to be considered one. These horses maintain a stockier build than more common lightweight horses because of their natural habitat.

These mustached horses hail from the British Isles, known for their wet and cold climates. Their feathered hooves and extra-long hair along their legs help keep them warm during the winter with the additional benefit of wicking away water from the back of their heels.

The feathered hooves likely help protect their feet from the rocky and thicket-type terrain they usually work and live in. Similar advantages present themselves for those horses that do rock a wintery stache.

The horse-stache’s unique feature helps it find grass to eat in low-light conditions and snow-covered terrain. It also helps these horses find the most nutrient-rich grass type for grazing. 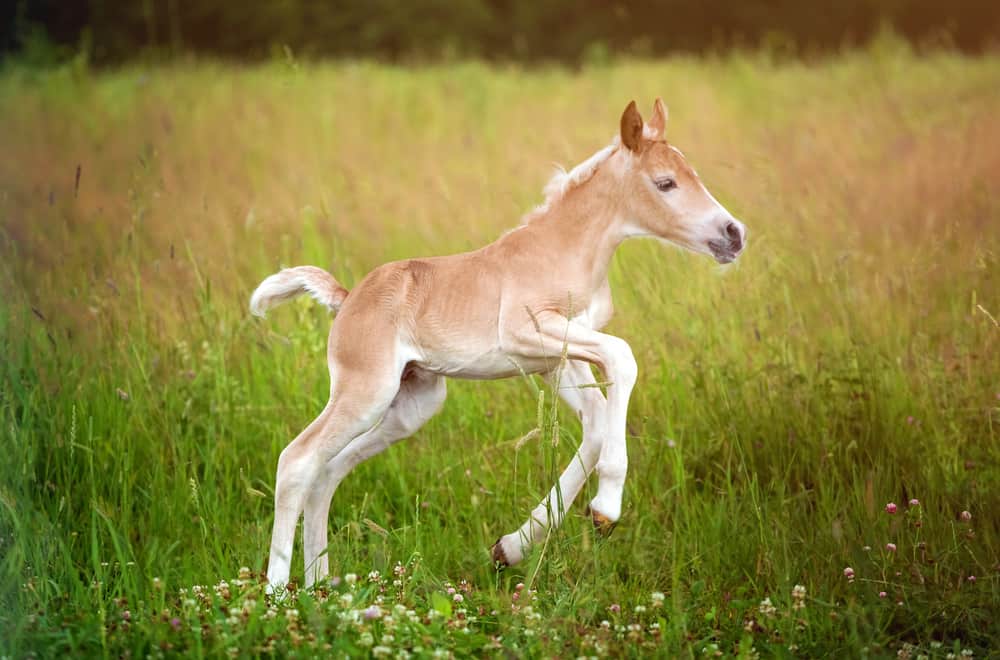 It is mind-blowing to think that a newborn foal typically weighs in at 100 pounds. But, as a general rule of thumb, a baby horse’s birth weight is approximately ten percent of its mother’s. That is one strong mamma!

Birth is a beautiful and natural part of life, but there are specific signs that you should look for to ensure that a foal is healthy. Whether their brains are smaller than humans does not seem to restrict them from meeting several incredible physical and physiological milestones shortly after parturition.

Doctor of Veterinary Medicine Barb Crabbe reports that a healthy foal “should be up and on his feet within an hour.” And within the first two hours, a horse will be walking and even take its first running strides.

#6. No Shortage of Horses Round Here 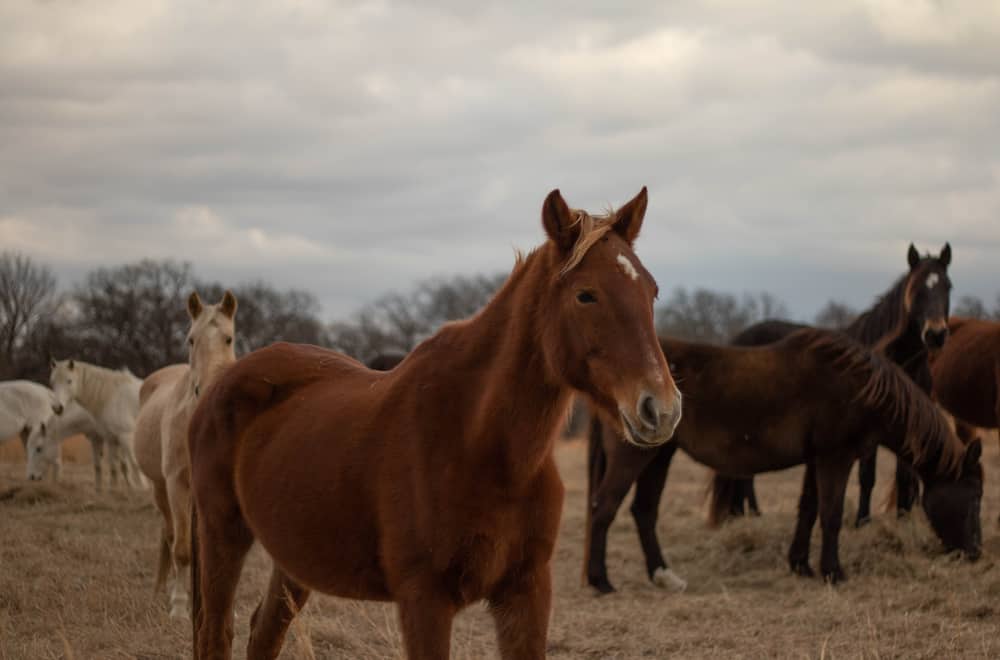 Worldwide, somewhere in the neighborhood of 60 million horses are in existence. These statistics include wild and domesticated horses, mules, ponies, and donkeys. 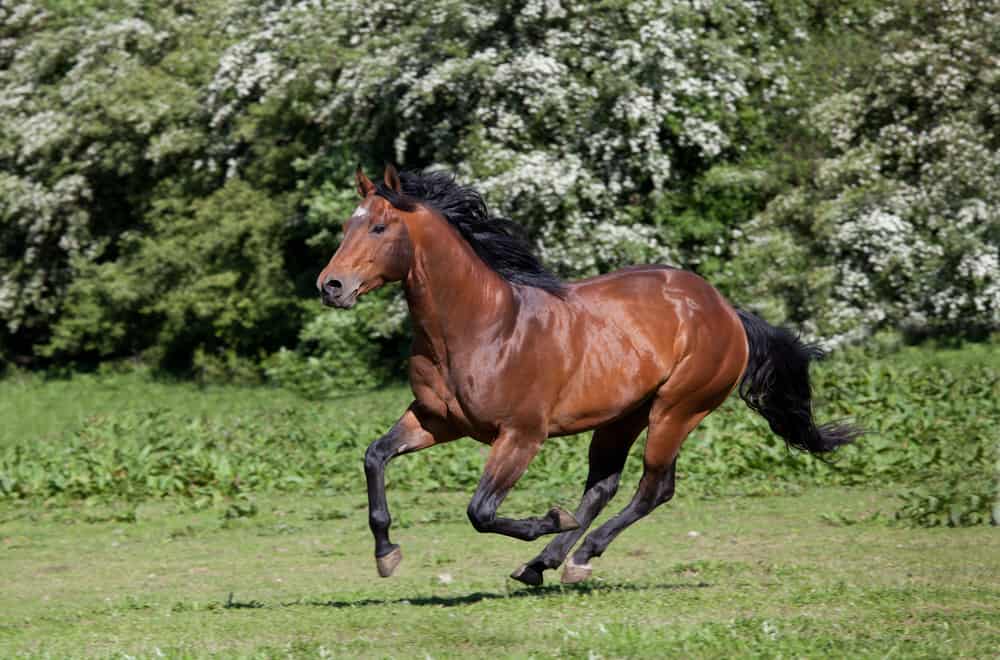 While she is the fastest Thoroughbred horse on record, quarter horses are actually “the fastest horse at any distance.” This is because certain breeds fare better at different distances.

For example, Arabian horses are untouchable in endurance racing, although some people consider Akhale-Teke horses of Turkmenistan as “the original racehorse.”

#8. Age Is A Beautiful Thing 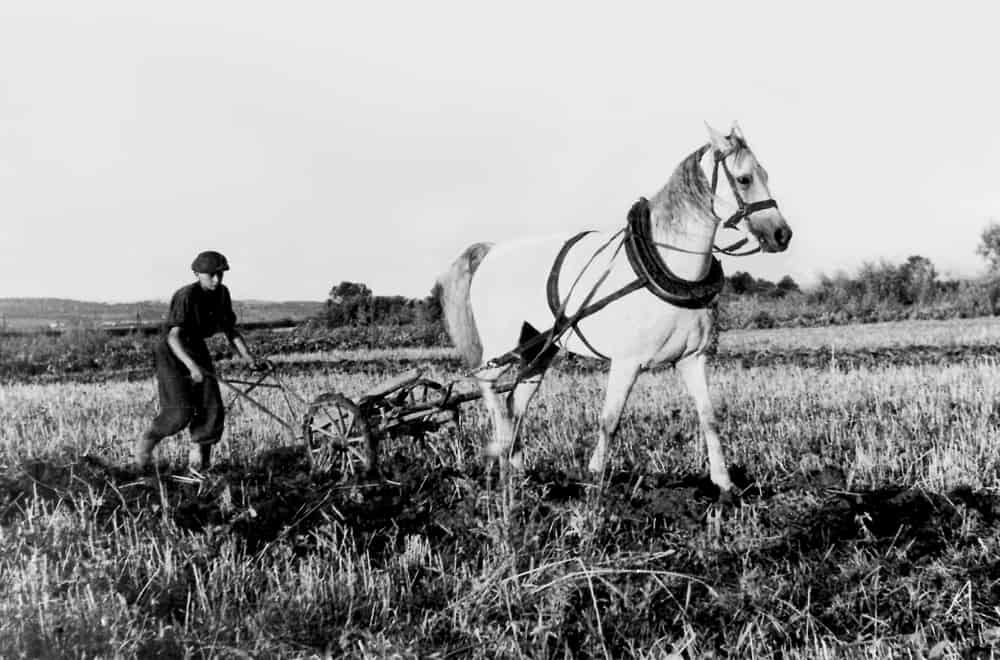 Modi Ramos mentions that horses typically live between 25 and 33 years in an I Heart Horses article. However, it appears that most horses recorded to be significantly older come from Britain.

Old Billy is the oldest horse that ever lived, spending more than six decades as a reliable workhorse in the United Kingdom. 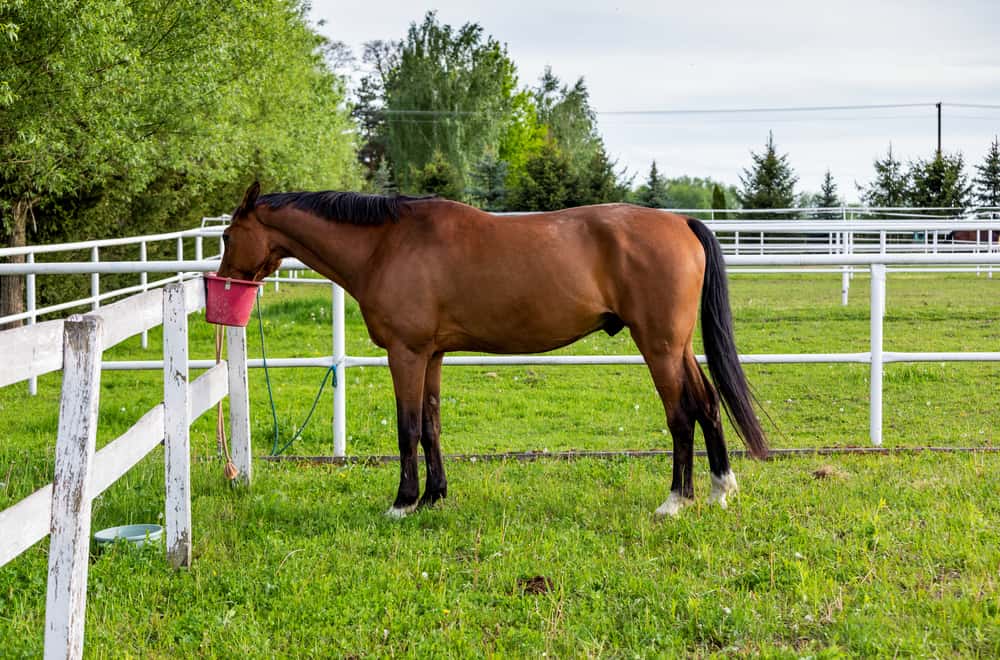 Intestinal health is exceptionally critical for domesticated horses. Diet, nutrition, and meeting a horse’s foraging needs are more complicated than one would think.

Due to “the specific way the esophagus connects to the horse’s stomach,” the muscles surrounding it are too tight to allow a horse to throw up.

Besides its anatomical restrictions for vomiting, some researchers think it is for protective purposes, while others feel that their fussiness in food choice takes the need to vomit away.

A Treehugger blog suggests that a horse’s inability to vomit is an evolutionary trait of horses in the wild. A vomiting horse would make it more susceptible to predators in the wild. 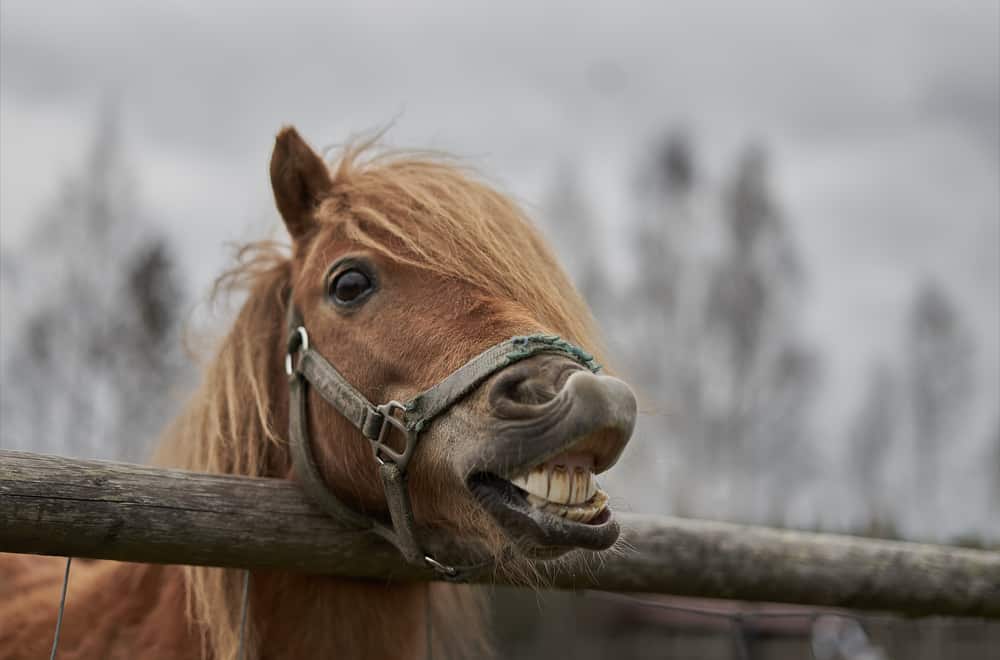 If you have ever seen a horse give you a big cheeky grin, then you have probably noticed its teeth. Although a horse may never win an award for prettiest teeth, dental care is critical in equine health, and it is even possible to estimate a horse’s age by looking at its teeth.

You can also tell the gender of a horse by counting its teeth, although humans often tend to bend down and look for more visible signs if you catch my drift.

Doctor of Veterinary Medicine Sharon Crowell-Davis explains “that horses display the flehmen response to facilitate transfer of inhaled scent molecules into the vomeronasal organ (VNO), a specialized chemosensory structure found in many mammals.”

So when you see a horse that looks likes it is giving you the grins, it more often than not has got to do with its sniffing response to scents.

As a horse owner, you will want to be well aware of your horse’s nutritional needs and seek advice from your equine veterinarian if you notice any abnormalities in behavior or health.

A horse produces forty times as much saliva as the typical human, and one Equithrive article mentions that saliva not only “help[s] moisten the food and ease its passage into the esophagus and stomach, [but] saliva also neutralizes stomach acids, therefore reducing the risk of gastric ulcers.”

You may not ever look at a horse the same way again after learning these 10 Fun Facts about horses; however, you are much more of an informed enthusiast than before.

Would you mind leaving any questions, concerns, or other interesting facts you have about horses in the comment section below?