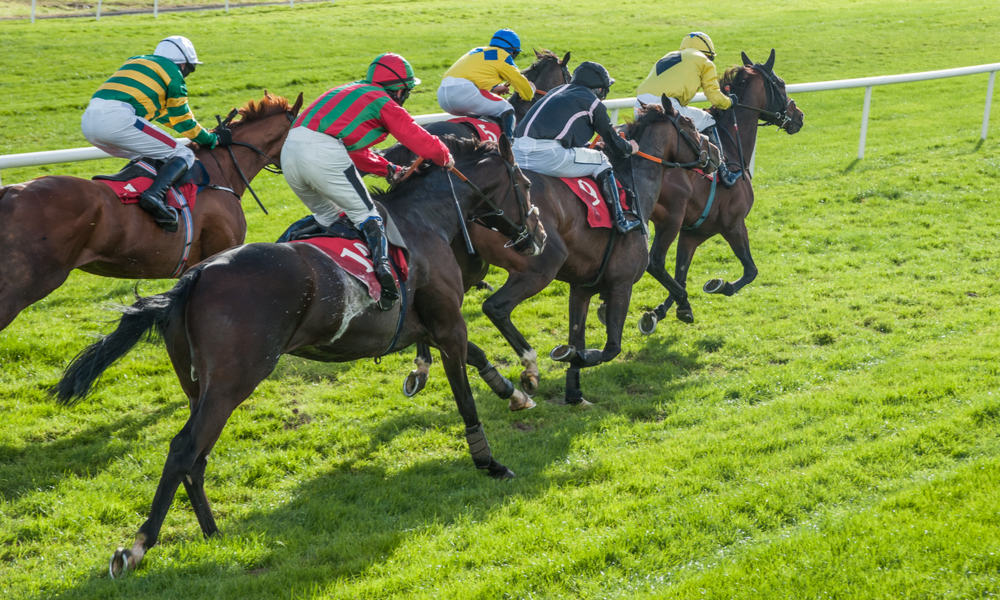 Horses have been part of the human community for millennia. However, Equine historians point out that people first domesticated horses approximately 6,000 years ago.

If technology had existed back then, I’m sure that these magnificent creatures would have been on the big screen a lot sooner. Nevertheless, it is still rather fascinating that horses debuted in the 1872 stop-motion picture called “The Galloping Horse.”

Since then, horses have featured in Old Westerns, war films, and family dramas (even animated) that people enjoy worldwide. Not only are horses stunning creatures, but they are intelligent, loyal, and red-carpet-worthy animals.

Enjoy the following list of 7 Best Horse Racing Movies that you can enjoy with the entire family.

The Evolution of Equine Stars in Film 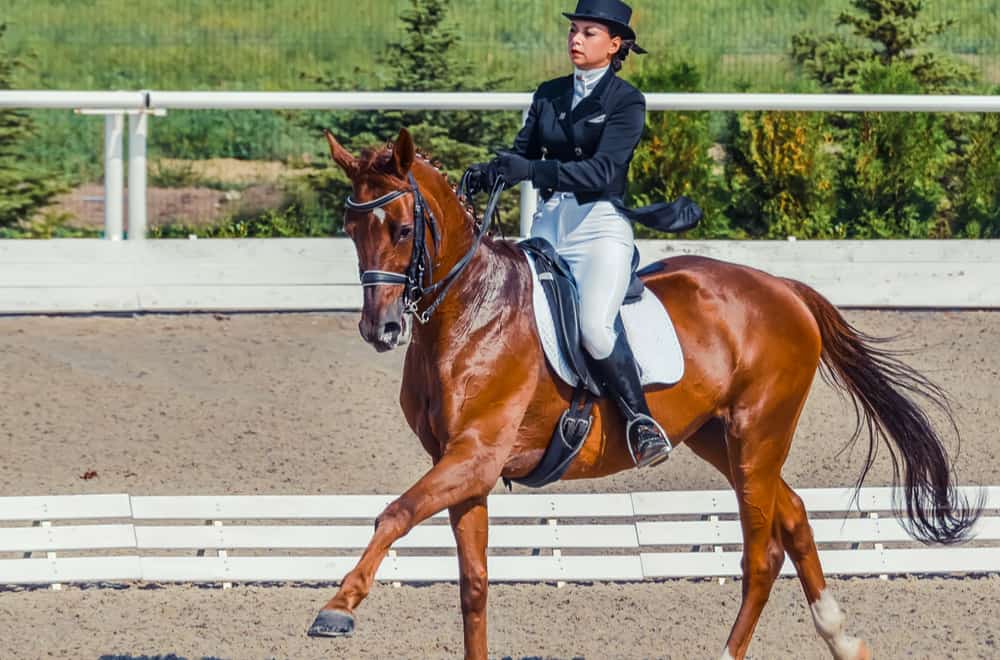 Horses may play various general roles, or some may be selected for specialty roles, as we will see in the upcoming list of best horse racing movies.

Every horse that goes on set must be carefully hand-selected for the job to ensure that they are trainable for film purposes. Horses perform quite intricate movements at equine shows worldwide; however, the noise and bustle of a Hollywood set are enough to cause anyone to lose their cool from time to time.

With horses, the possibility of a horse becoming skittish could become a significant liability threatening the crew’s safety and the horse itself. Therefore, while adequate training offset is a must-have, special preparations will be made on-set to ensure that the horses have soft ground to walk upon and that there are no trip hazards on the filming block.

Equine professionals will assess each horse by its disposition and training propensity. Let me assure you that this is no easy feat and that there are specific equine handlers dedicated to the task.

And now for the 7 Best Horse Racing Movies that the entire family can enjoy. Be sure to check for parental guidance ratings for the subtle use of language if you want to watch one of the following dramas together with younger children.

You will surely see some recurring themes when you read through the following list of best horse racing movies. Of course, as a parent, you will want to research the specific parental guidelines of the film, and I recommend that you preview the movie first.

Some of the themes that come to mind as you read through the following list of best horse racing movies include:

Now that you have a better idea of the hard work entailed in training a horse for a motion picture and some of the specific qualities of a horse racing movie, let’s turn no further than to this list of the next film that you will want to watch.

Everyone loves when a non-suspecting underdog pushes past obstacles and rings the winning bell. Seabiscuit gave Americans something to believe in again during the challenging socio-economic times of the Great Depression.

In exciting sports films of the like, you can usually point out the underdog and empathize with it as it confronts the anticipated emotional and physical struggle throughout the movie’s subsequent scenes.

Seabiscuit follows the life of a horse destined to remain at the lowest racing level until unlikely bond teams the horse up with three men who believe in magic.

While the rest of the equine community thought that this match-made-in-heaven would be a sure failure, the resilience of these outcasts prove that hard work, will, passion, and drive are what you need to change the course of history- all you seem to need are three men and one horse.

Another name that will don the halls of history for years to come is the inspirational life of the hard-running Secretariat. Once again, the American public was rooting for a horse that provided some hope during a time of American history shattered by political scandal and war.

The beautiful thoroughbred horse did not have an undefeated record; however, his wins were big by any measure. Secretariat’s most remarkable feat culminated in his 1973 taking of the Triple Crown, where he crossed the finish line at a whopping 31 lengths ahead of its nearest competitor.

Winning numerous awards is nothing new for Disney either. However, the film powerhouse did a spectacular job of making people feel that warm and cuddly feeling for which they are renowned.

The Secretariat film closely follows the impossible true life of one out-of-the-box horse and its owner Penny Chenery, the woman who had nothing but love and strong-willed determination to keep her ailing father’s stables from falling to economic demise.

Learning as she went, Penny Chenery dominated the historically men-led sport of horse racing by following her womanly intuition with a fierceness that would scare the knickers of any man in her path.

As History.com editors put it, Secretariat’s heart was “twice the normal size,” both biologically and metaphorically.

This 1983 film follows the real-life of an Australian racehorse known as Phar Lap. Similar to Secretariat, the autopsy reports revealed Phar Lap had an extra-large heart.

The story of Phar Lap is not all sweet, as his death remains a mystery to this day. But, unfortunately, this talented racehorse was so good, and speculation has it that his death came as a response from angry gamblers during an era full of mafia-controlled enterprises.

Many equestrian veterinarians have spoken on the issue of Phar Lap’s untimely death, some debunking the involvement of the mafia altogether. However, Dr. Ivan Kempson and Dermot Henry collaborated in 2007 in a posthumous forensic study of six strands of Phar Laps hair and “concluded that 30 to 40 hours before Phar Lap died he had been given a massive dose of arsenic.”

The life of Phar Lap, the racehorse, touched the hearts of Australians and New Zealanders so much that his extra-large heart is the most popular exhibit at the National Museum at Canberra.

Dreamer is a fantastic tale following the rescue and rehabilitation of a horse that suffered a broken leg. This family-appropriate film portrays the beautiful relationship between humans and horses and remains an inspiring tale for second chancers.

A broken leg in the equestrian field is usually a nightmare. But, unfortunately, horse owners are more ready to have the horse put down than pursuing months of expensive rehabilitation options that either fail or develop other debilitating infections.

Kurt Russell and Dakota Fanning play the roles of real-life Ben Crane and his daughter Cale as they express the worth of “multi-generational relationships and human frailty,” according to how one professional reviewer captioned the essence of the movie.

This 1979 classic will deliver a combination of excitement and emotion as it tracks the relationship between horse and boy and dives into the competitiveness of the horse racing world that exists.

While this movie does not follow real-life events, it is an adaptation of the 1941 children’s novel written by Walter Farley. Young Kelly Reno plays the adventure tales Alex Ramsey who works alongside a has-been trainer to get his horse ready for the big race.

Since Kelly Reno grew up on a ranch and already had horseback experience, this list of 10 Things You Didn’t Know About the Black Stallion Movie reports that “the young boy did many of the riding and action scenes himself in the movie.”

You might also be surprised to find out that Cass Ole’s, the Black Stallion, was a very decorated racehorse before Hollywood stardom.

This film became an instant classic that families have continued to enjoy over the generations. The film is a culturally aware production that follows the real-life characters of one man, Frank Hopkins, and his horse, Hidalgo.

The story depicts the challenges that riders face in a centuries-old cross desert competition that supposedly spans 3,000 miles.

Just the sound of the Oceans of Fire race has me gripping the edge of my seat with curiosity and excitement. But, however gripping a tale, there is plenty of doubt and speculation that an endurance race of such caliber ever existed.

There is a long list of horse racing movies and an even longer list of horse movies in general, like the internationally acclaimed Spirit; however, I thought for the parents, it would be worth including an animated option for young viewers.

Racing Stripes does not fit the same mold as the previously mentioned dramatic tales of underdog horse becomes race mogul. Instead, this fantasy-based animation follows the life of a young zebra who dreams of racing with the thoroughbreds.

The tale includes a variety of beautiful animals that help encourage Stripes to follow his dreams. Warner Bros combines live-action and computer-animated scenes to bring this story to life that is sure to bring giggles to your little one’s faces but equally heartfelt for older children who are beginning to have emotional cognizance.

As You Get Comfy on the Couch…

In this list of 7 Best Horse Racing Movies, you are indeed about to find one that you can move over to the couch with your favorite hot beverage and snack and begin to enjoy.

Please leave your reviews or questions about any horse racing movies mentioned in the comment section below.