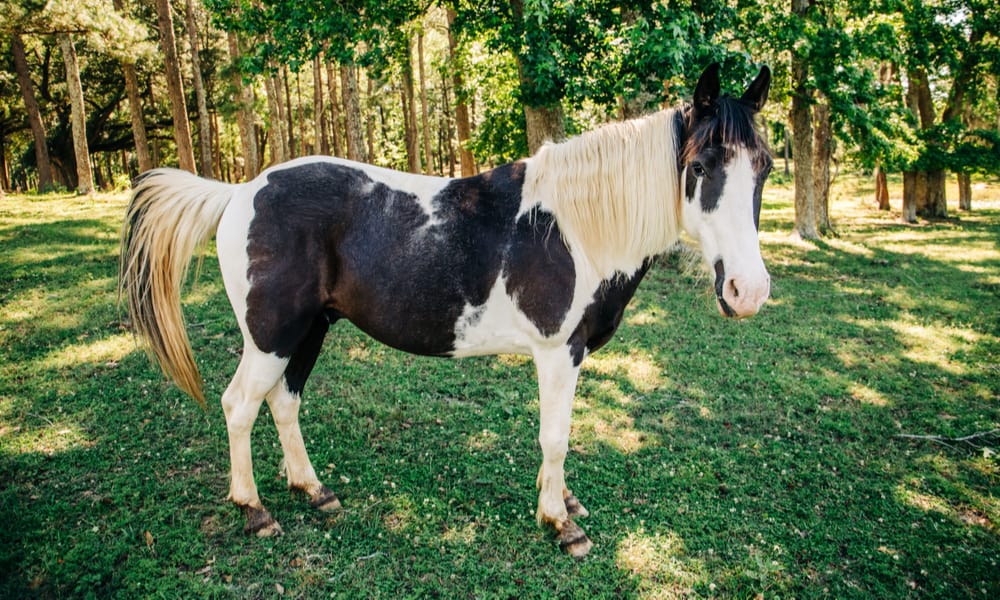 There’s something special about black and white horses. Whether they’re piebald or pinto, their dramatic coloring always turns heads.

If, like us, you love monochrome mounts, you’ve come to the right place! We’re here to celebrate 14 black and white horse breeds from around the world.

So if you’re ready, let’s find out more about these beautiful animals! 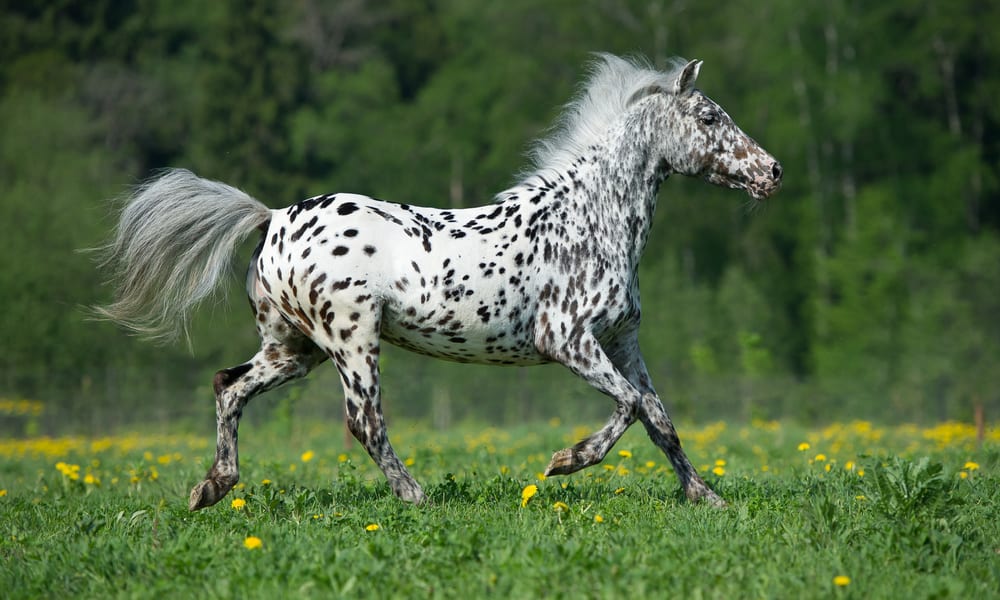 The Appaloosa is one of the world’s most striking breeds of horse. It’s known for its spotted coat, which is the result of the leopard complex gene. And while Appaloosas can have coats of any color, those with black and white coloring are among the most dramatic.

The breed was developed by the Nez Perce native Americans in the nineteenth century. As well as their distinctive coats, the horses have stripy hooves and mottled skin, and their eyes have white sclera.

In years gone by, their tails and manes were relatively sparse. But today’s breeders have moved away from this, and the modern Appaloosa usually has a thick mane and tail.

The breed is a favorite in Western riding and as a stock horse. And in 1975, the Appaloosa was given the honor of being named Idaho’s state horse. 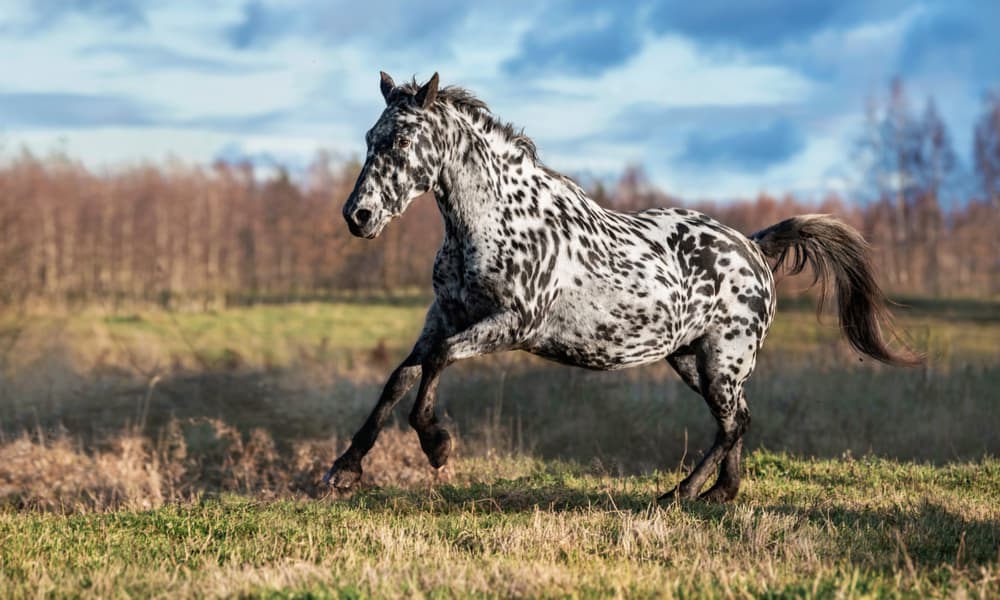 Like the Appaloosa, the Knabstrupper is a horse with a coat that’s often spotted. Those spots are again the result of the leopard complex gene, although it’s also possible to find solid colored Knabstruppers.

The breed originated in Denmark early in the nineteenth century. Their dramatic looks have made them very popular. You’ll find them used in circuses and to pull carriages, where their beautiful coats add to the visual spectacle.

They usually stand somewhere between 15.2 and 16 hands. But there are also pony-sized Knabstruppers. These can make excellent mounts for children.

Knabstruppers are also talented athletes. They have excelled in disciplines including show jumping and dressage, and they make good horses for general riding too.

Their popularity has seen breeding associations spread far beyond the breed’s original home in Denmark. Today you’ll find them in countries including the Netherlands, Switzerland, the USA, Canada, Australia and New Zealand. 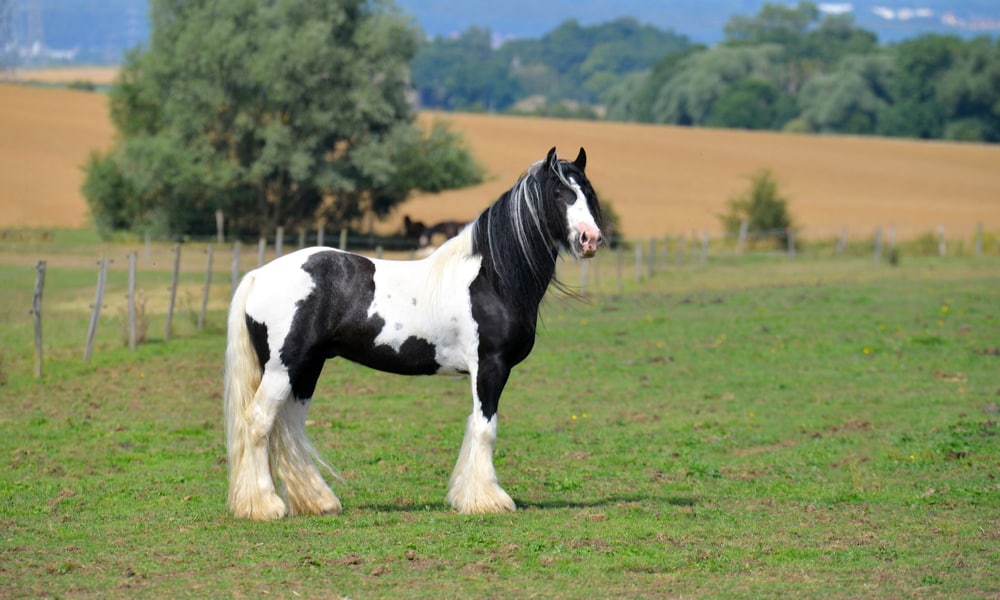 The beautiful Gypsy Vanner was traditionally used to pull the caravans of Gypsies and Irish Travellers. The caravans, known as vardos, were often richly decorated, making the partnership quite a sight to behold.

Today, you’re more likely to find them being shown and traded at horse fairs. And Gypsy Vanners are increasingly competing – and finding success – in dressage.

They are striking animals, with long manes and tails, and often have feathered heels. Piebald – black and white – coats are amongst the most common colors for this breed.

But Gypsy Vanners can also have skewbald coats – that’s white patches on a bay or chestnut coat (or any other color, as long as it isn’t black). And there are solid colored Gypsy Vanners too.

Different breed associations around the world set different standards. The US requires horses to be a maximum of 16 hands, while in Europe the maximum is 16.2 hands. 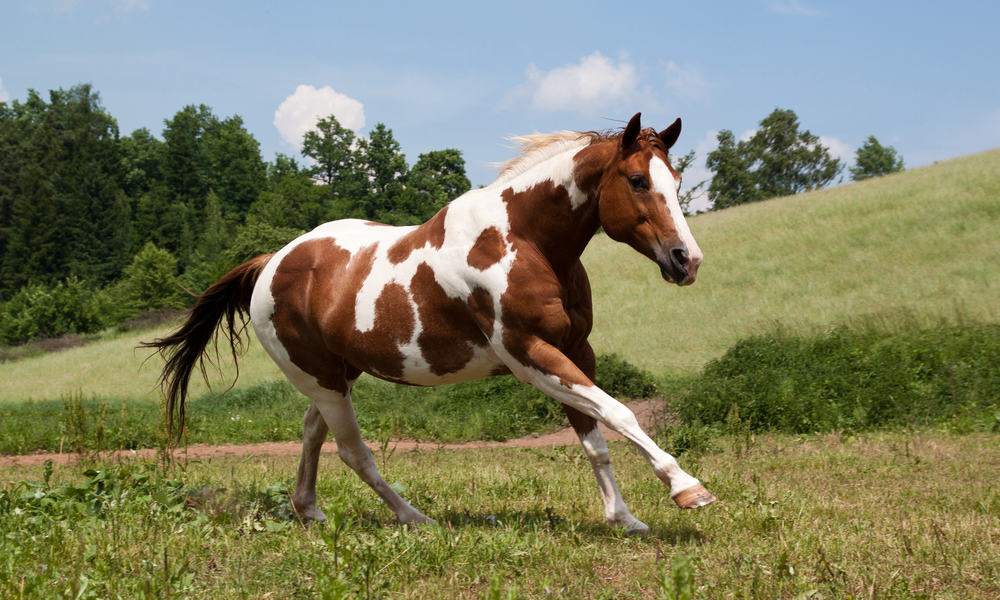 A horse with a pure American Paint bloodline may be registered even if it has a solid colored coat. These are known as “Solid Paint Bred” horses.

All American Paints have a sturdy stock horse body. That means they’re muscular and heavy, without being too tall. Their powerful hindquarters allow them to accelerate quickly, and their low center of gravity makes them easy to maneuver.

Those attributes mean they’re a common sight in Western riding disciplines, including pleasure riding and reining. But you may also see them in English riding, and they can make excellent show jumpers. 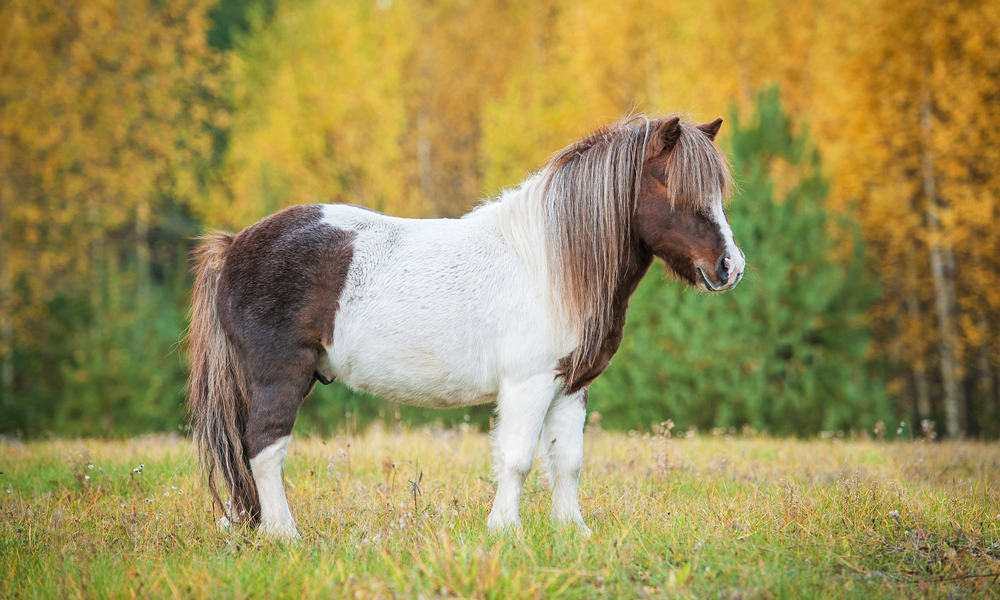 We’re cheating a little bit with Shetland ponies, because their coats can be any color. But you can find black Shetland ponies with white points – and they’re just too cute not to include in our list!

They come from the Shetland Islands off Scotland, where the harsh climate developed a tough and sturdy animal. Their history dates back to the Bronze Age. At some point, they were almost certainly bred with the horses of Norse travellers.

They have small heads with short necks, compact bodies, a deep girth and strong legs. And in winter they grow a double coat to keep them warm in the cold Shetland temperatures.

They are small in stature, not exceeding 10.5 hands. And their strength means they have been used for everything from agriculture to pulling carts in coal mines. Today, you are most likely to find them used as mounts for children, in horse shows and petting zoos, and for therapeutic riding. 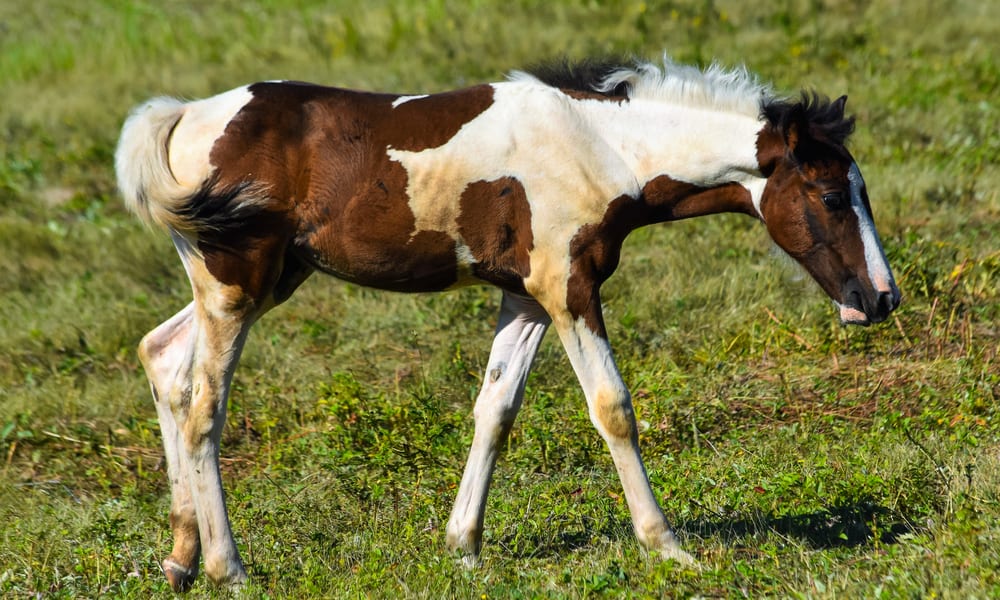 The American Saddlebred is popularly known as the “horse America made”. Its ancestors are riding horses from the time of the American Revolution. And it was used as a cavalry horse in the Civil War, where it was renowned for its courage and endurance.

The modern incarnation of the breed originated in Kentucky, late in the nineteenth century. Their coats can be found in all colors, including pinto patterns in black and white. They generally stand between 15 and 16 hands, but can be as tall as 17 hands.

They’re an incredibly popular breed, both within the USA and abroad. Some consider them the most beautiful breed in the world, and they’re known for their spirited yet gentle temperaments.

They’re a gaited horse, with a distinctive high-stepping action. And while they’re a regular sight in the show ring, they can also be found competing in events like driving and English riding disciplines.

7. Pony of the Americas 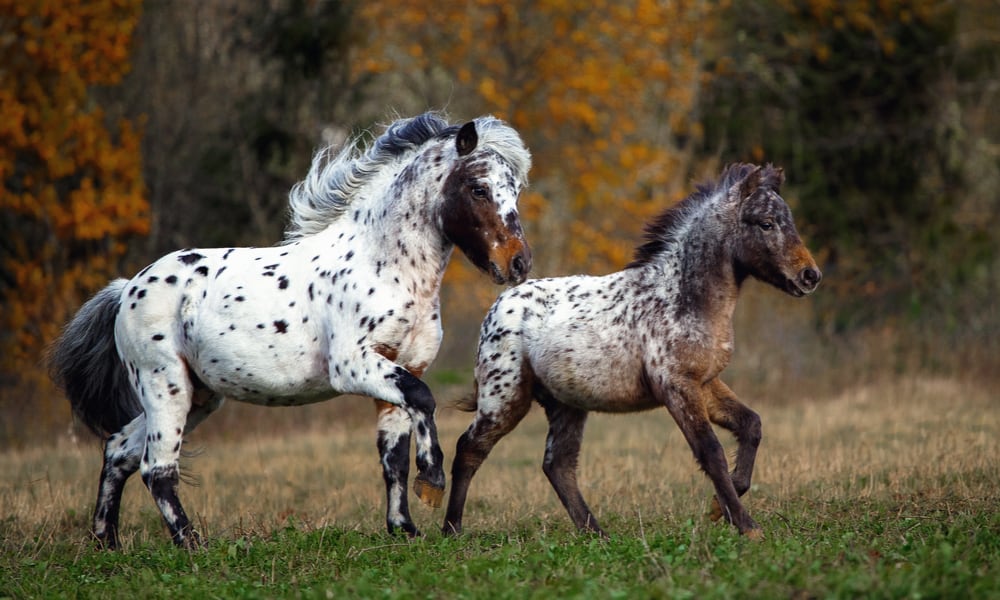 Despite its name, the Pony of the Americas has the body type of a horse. Its American Quarter Horse and Arabian heritage is evident in its slightly concave face, deep chest and well-muscled body.

But the defining feature of a Pony of the Americas is its coat. To be admitted to the breed registry, it must have a coat with what’s known as “loud Appaloosa” coloring. This means it must exhibit the spots of the leopard complex gene, and they must be visible from 40 feet away.

Ponies of the Americas also have the other distinctive features of the leopard complex gene. Their eyes have white sclera. And they have striped hooves and mottled skin around their mouths, eyes and genitalia.

They were originally bred for use as stock horses and for Western riding. But today they can also be seen competing in dressage, show jumping, three-day eventing, driving and endurance riding.

With such versatility, it’s not surprising that the breed has gone from strength to strength. There are now over 50,000 Ponies of the Americas across the USA. 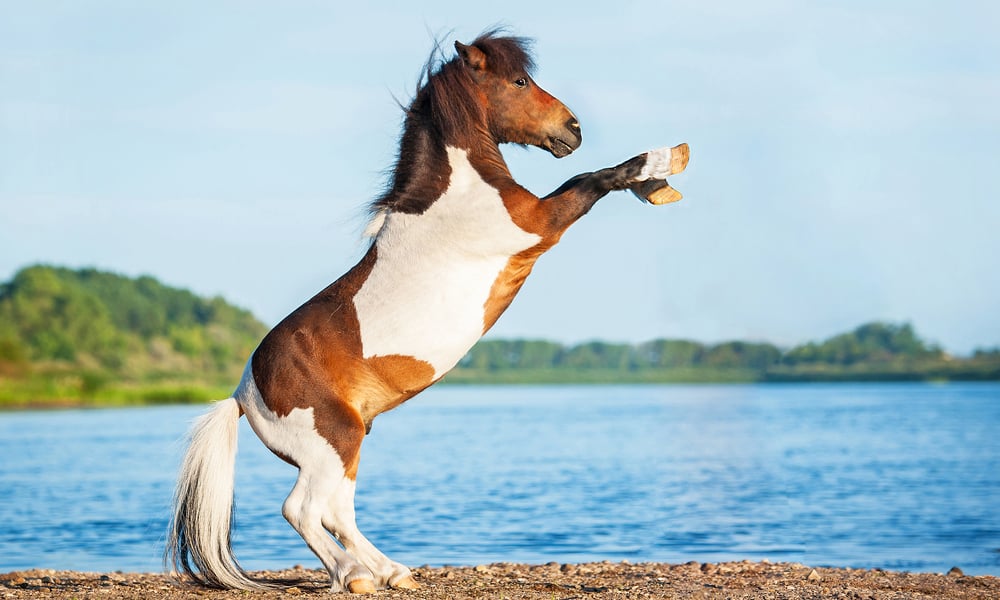 The wild-roaming mustang is another horse that can be found with a coat of any color. And it can be both solid colored or patterned.

The horses live wild in the western states of the USA, a living memento of the country’s frontier history. Originally descended from Spanish horses, the blood of many different breeds has been added into the mix over the years.

As a result, Mustangs vary in height in different parts of the country. They can be as short as 14 hands or as tall as 16. Most, however, tend to fall towards the lower end of the scale. 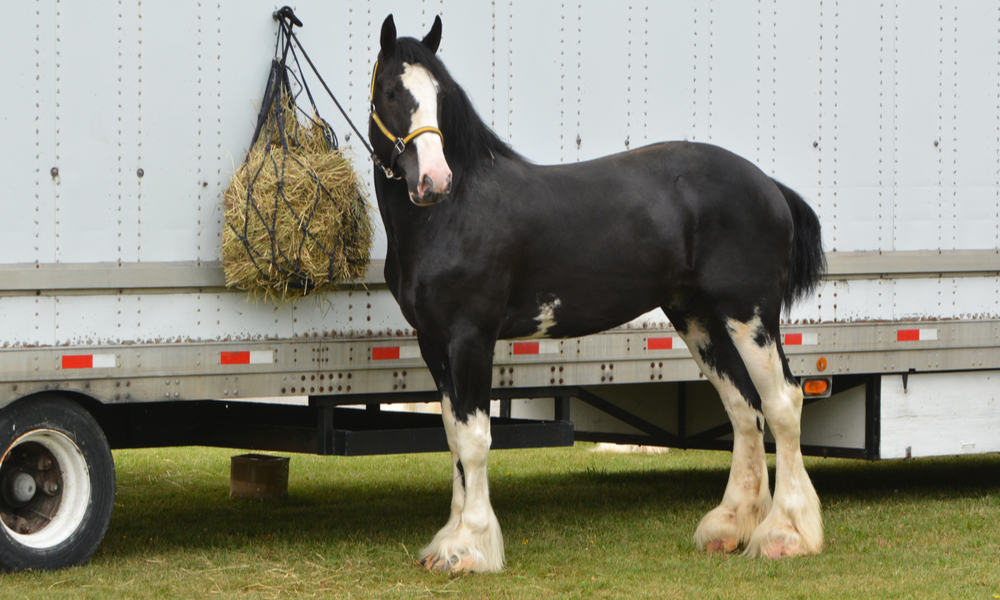 The magnificent Shire horse is a giant amongst horses. It’s a draft breed, with a long history of use in agriculture and forestry, where its size and strength made it invaluable. Today, however, mechanisation has largely taken its place.

As a result, numbers have sadly fallen dramatically. Several enthusiastic societies are, however, working to preserve the breed. And you can see Shire horses being paraded at shows and giving rides to tourists.

Black is one of the four colors for Shire horse coats, along with bay, gray and chestnut. And while they don’t have large amounts of white, white points are fairly common. This, together with its height and power, makes the Shire horse a dramatic and imposing sight.

Shire horses have found their way into the Guinness Book of Records, holding at various times the record for the largest and tallest horse in the world. The biggest ever Shire was called Mammoth. He stood an astonishing 21.2 hands high, and at his heaviest weighed 3,360 pounds. 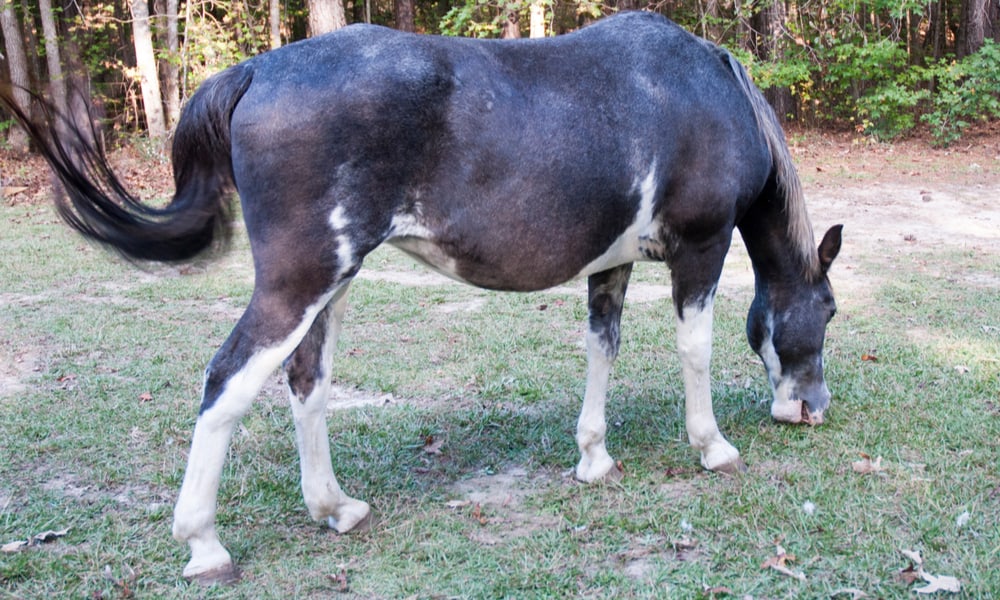 The Tennessee Walking Horse is known for its distinctive movement, calm temper and sure-footedness. And it’s another horse that can be found in the striking black and white color combination.

Coats can be solid colored or pinto, and black base coats are fairly common. Pinto patterns include sabino, overo and tobiano.

As you might expect from the name, the breed originated in Tennessee. Canadian and Naragansett Pacers from Kentucky were bred with Texan Spanish Mustangs. The result was a strong and able horse that could be used on farms for riding, pulling equipment and racing.

They’re now frequently seen in the parade ring, but controversy surrounds training methods. Some trainers have engaged in the vile practice of “soring”, using methods that inflict pain to encourage the horse to step high. The practice is illegal, but – disgracefully – persists in some quarters. 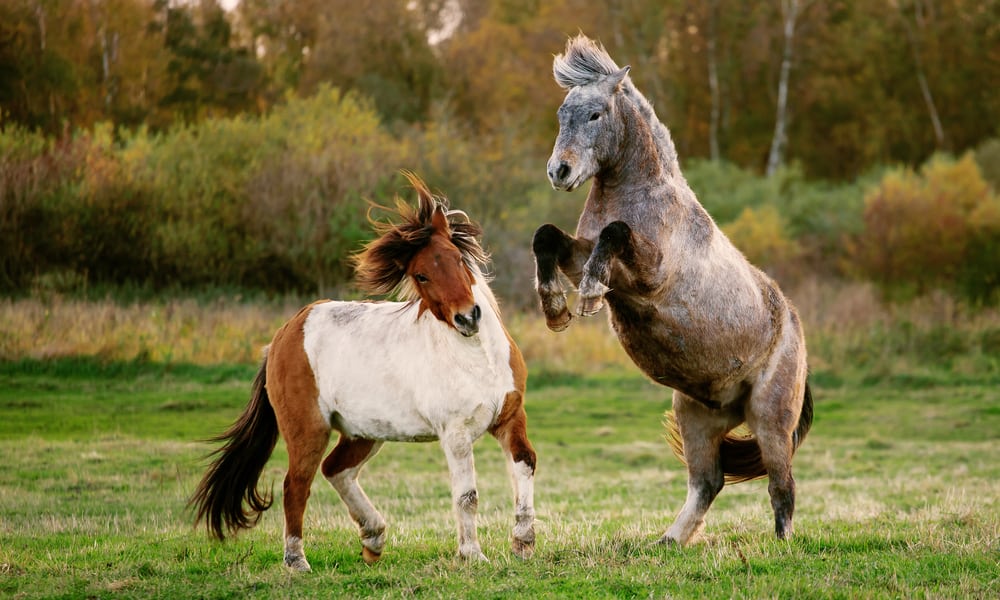 The resilient Icelandic horse can be found with coats of many different colors. These include striking black and white pinto combinations.

The breed has a long history, dating back to the Norse settlers of Iceland in the ninth century. Horses have always been treasured in Iceland, and war horses were sometimes buried alongside their riders.

The popularity of the breed is reflected in its numbers. Iceland is home to about 80,000 Icelandic horses. That’s particularly astonishing when you know that the country’s human population is only just over 300,000!

Icelandic horses have also gained enthusiastic fans around the world, particularly in Scandinavia, western Europe and the USA. Germany is home to no fewer than 50,000 of them. That’s about half the total number living outside Iceland. 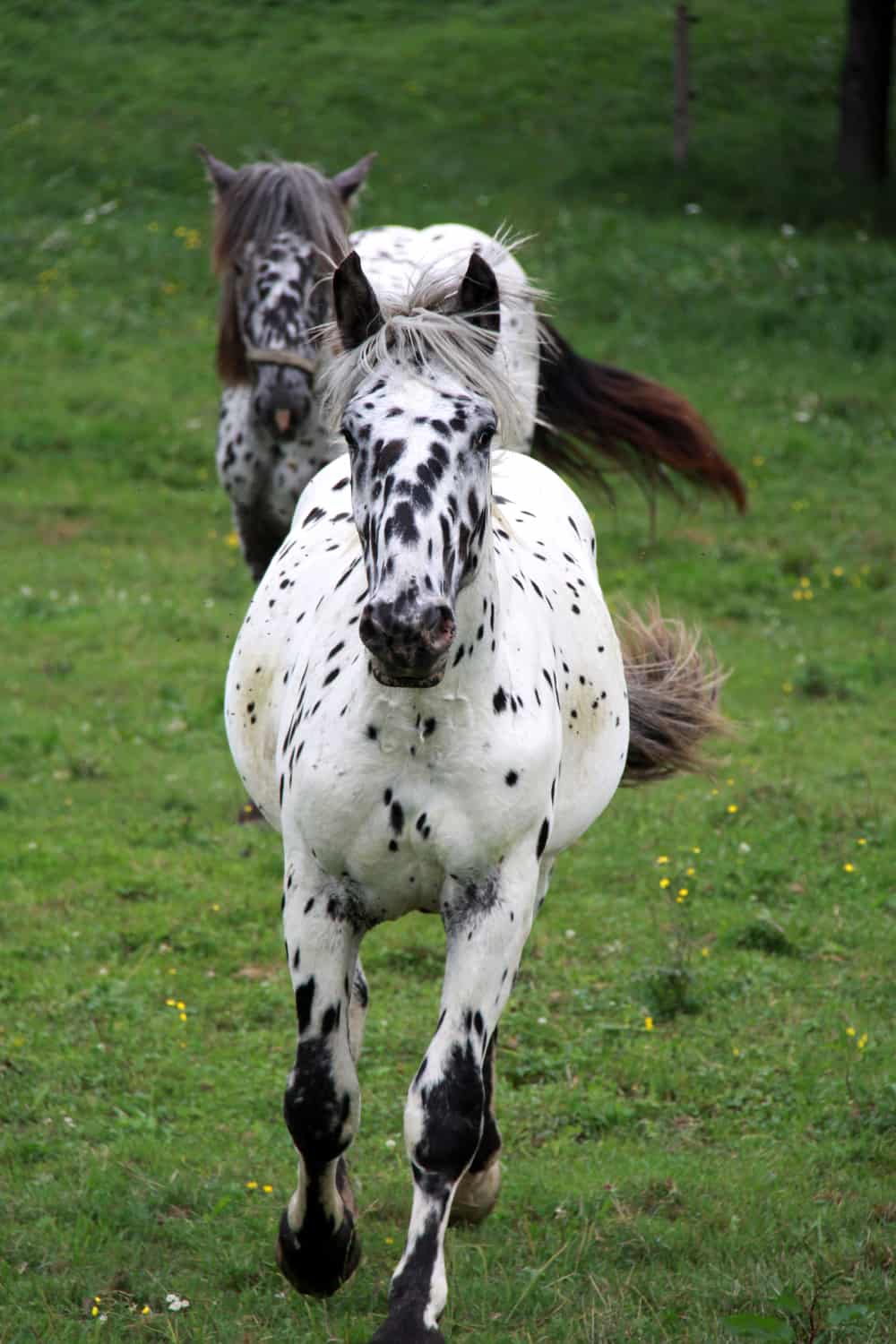 The majestic Noriker is a draft horse that originated in the mountains of Austria. As well as solid colored black, bay and chestnut horses, there are pinto patterns including overo and tobiano. And some horses carry the leopard complex gene and have spotted coats.

Norikers stand between 15.2 and 16 hands. They are muscular animals, with a sure footedness that’s well adapted to their mountainous homeland.

Their frequently striking coat patterns have made them highly popular. They have largely resisted the decline of other draft breeds, and today there are about 10,000 Norikers in Austria. There are also active breeding programs in Italy. 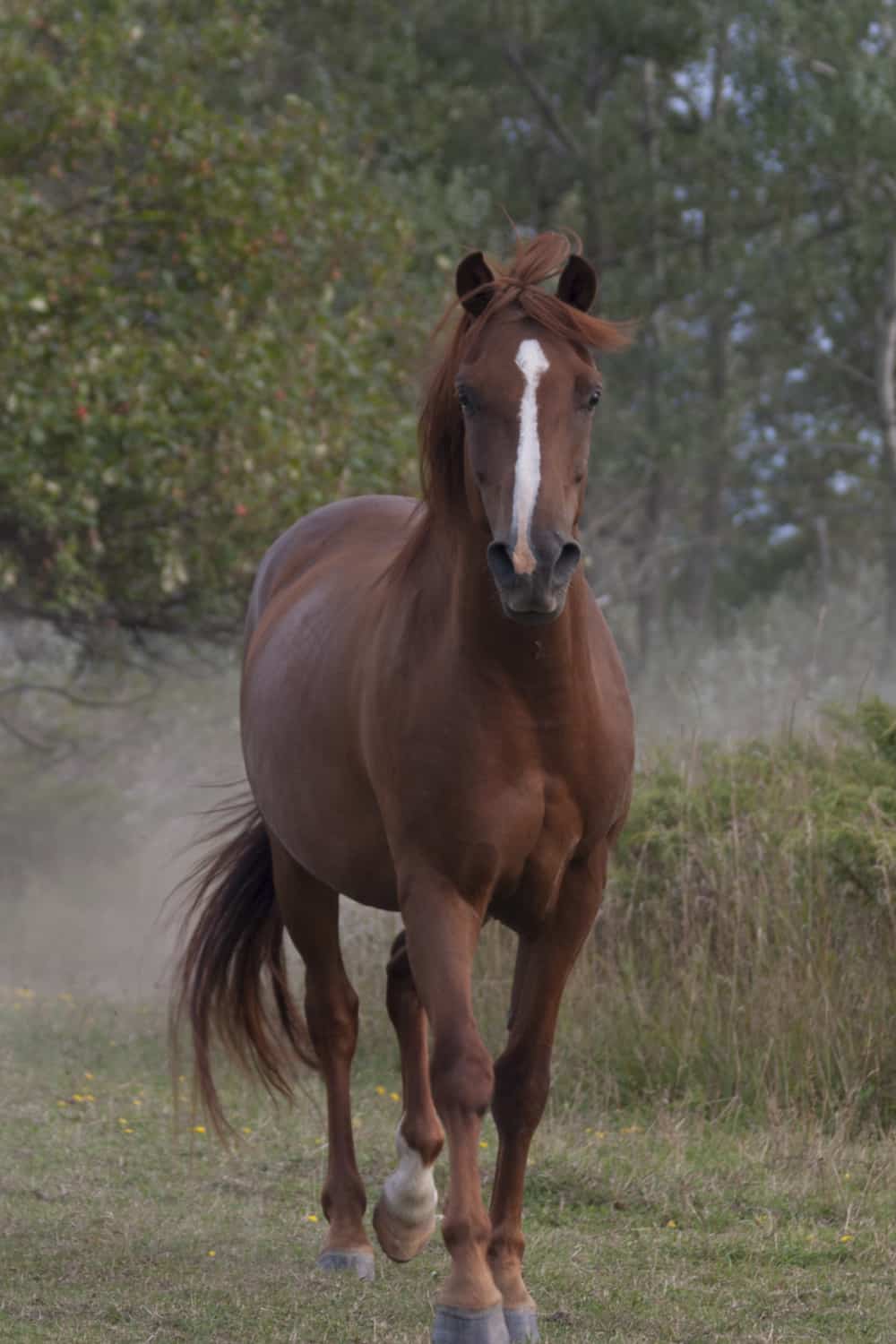 The Morgan is one of the oldest and best-known breeds of horse in the USA. All Morgans trace their lineage back to the foundation horse Figure. And the breed takes its name from one of Figure’s owners, a breeder and composer named Justin Morgan.

Black is one of the most common coat colors, together with bay and chestnut. And some Morgans have the pinto patterns frame overo, sabino and splashed white.

They generally stand between 14.1 and 15.2 hands. And they have large eyes, an arched neck, and strong legs and hindquarters. 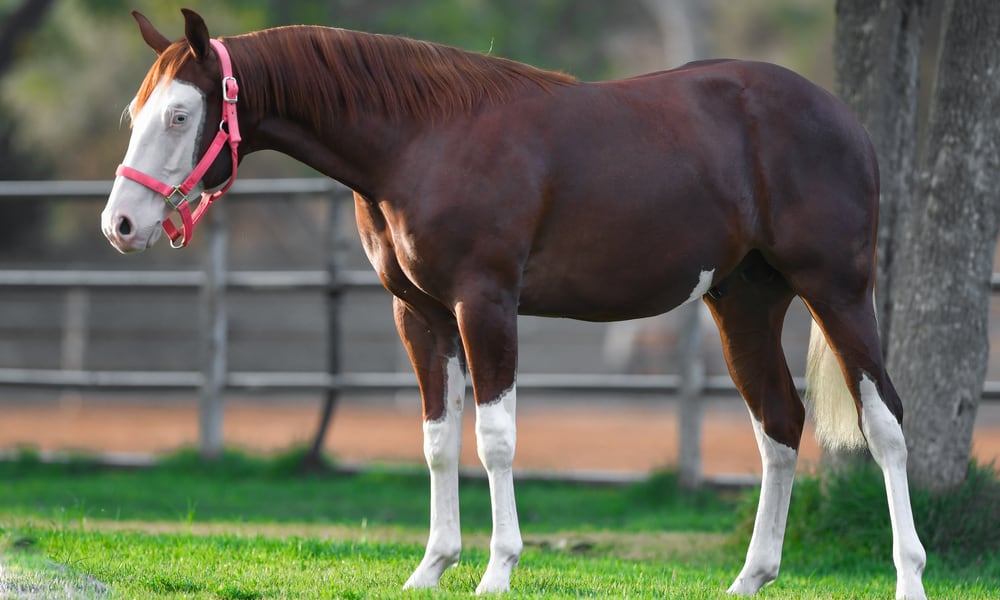 Quarter Horses (also known as American Quarter Horses) most often have sorrel coats – a shade of chestnut. But you can also find black examples, and some have spotted patterns.

The three types are just what you’d imagine from their names. Stock horses are bred for driving livestock. Halter horses are heavily muscled for halter competitions. And hunters have a slimmer build, able to sprint fast over shorter distances.

The American Quarter Horse is the most popular breed in the USA. At the last count, there were nearly 3 million horses around the world.

That brings us to the end of our round-up of 14 beautiful black and white horse breeds. From draft horses to ponies, they come in all shapes and sizes. But all have distinctive monochrome coats that win them fans wherever they go.

We hope you’ve enjoyed learning more about these beautiful animals!