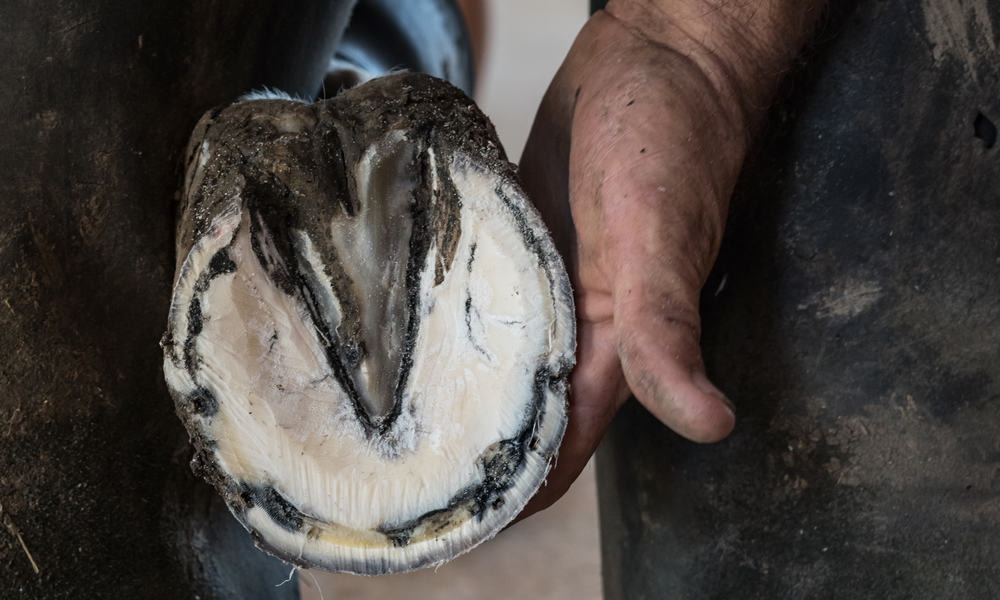 Picture any random horse’s legs in your mind. The legs might be feathered or have white stocking markings, but they definitely have horseshoes. Focus on that that tougher external shell above the horseshoes. It’s called a capsule or hoof cap. Hoof capsules are protective.

They cover the softer inner tissues of your horse’s foot. A degloved horse hoof (horse hoof without a cap) can be caused by physical injury, infection, a poor diet, or wearing the wrong horseshoe. It’s quite painful for the horse. Let’s learn more about this gruesome condition.

What is a Degloved Horse Hoof?

A degloved horse hoof (hoof without a cap) is a horse foot that doesn’t have its outer casing. Instead, the inner parts of the foot are exposed. The foot looks raw, pink, and fibrous, a bit like a car filter. It seems painful – and it is. Worse than having your nail roots yanked off!

A degloved horse hoof does permanent damage to any horse because they’ll never walk the same again. Instead, they may have a distinct limp and are likely to be lame for life. There are things you can do to ease the pain and help the horse feel better, but it’s irreversible.

Hooves look pretty strong when you see them from a distance (or when they trample your foot). So if you spotted a horse hoof without a cap, you’d assume something pried off the capsule. But diseases and pathogens can also cause the capsule to slip off the horse’s foot.

What Causes a Degloved Horse Hoof? 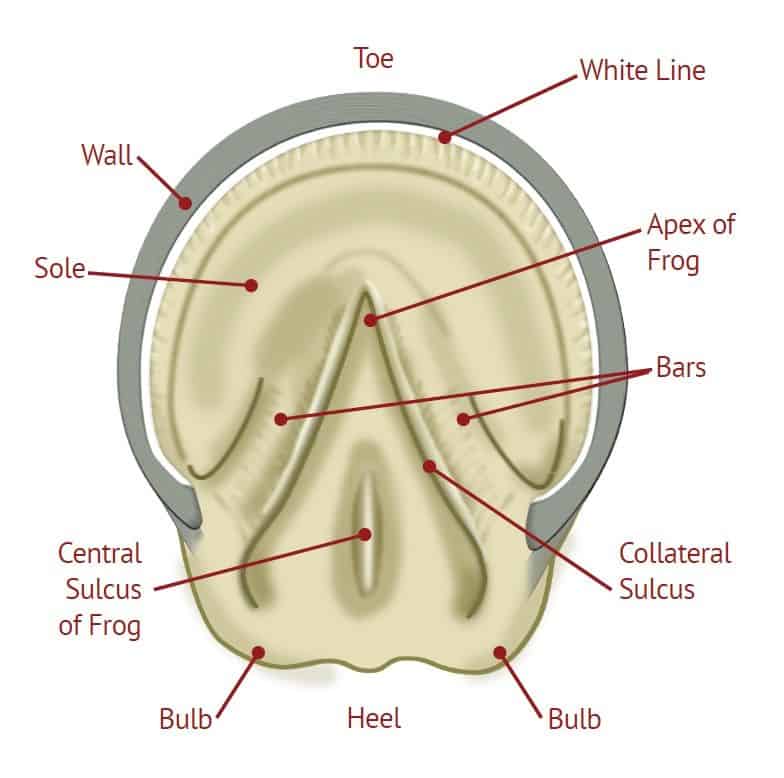 A degloved horse hoof can be caused by multiple triggers including:

When a horse gets laminitis, the tissue between the coffin bone and the keratin case (aka the laminae) gets sore, swollen, and eventually detached, which causes degloving. Causes include excess sugar in grains, toxic plants like black walnut shavings, or working on hard surfaces.

Your horse can also catch laminitis as a side effect of a different disease, or from putting too much weight on one leg (maybe because the other legs are hurt). There’s no cure for laminitis, so just keep the horse comfortable to avoid the damage from debilitating the horse.

Just like an accident can crack your tooth or break your bones, an injury can make your horse’s hoof split open. If the damage forms a small crack, that slit can let in pathogens that could weaken and infect the horse, making it easier for the hoof to split open as they run.

Ideally, your horse should get a trim and a new set of shoes every month or so (6 to 12 weeks is best). So if the shoes are poorly done, or if they aren’t changed often enough, your horse can step wrong or hurt its feet on harsh ground. These incidents can cause degloving.

As a foal makes its way about the world, it may get its feet accidentally trod by its mother, father, or other horses in the area. Because the foal’s feet are still young and fragile, that misstep can lead to degloving. Luckily, those immature foal feet often regrow and recover.

White line aka seedy toe is caused by a fungus, and it attacks the ‘white line’ between a horse’s outer hoof wall and inner sole. If you catch it early enough, you can repair the hoof damage from white line disease before the cap falls off completely. Remove the infected bits.

Sand, scrape and file them off (aka debridement). Treat the exposed area with copper sulfate (mixed with toothpaste) to kill any remaining bacteria. Use a foot mold, mesh, and glue to fit a protective horseshoe over the infected foot. This rebalances the horse’s hooves. 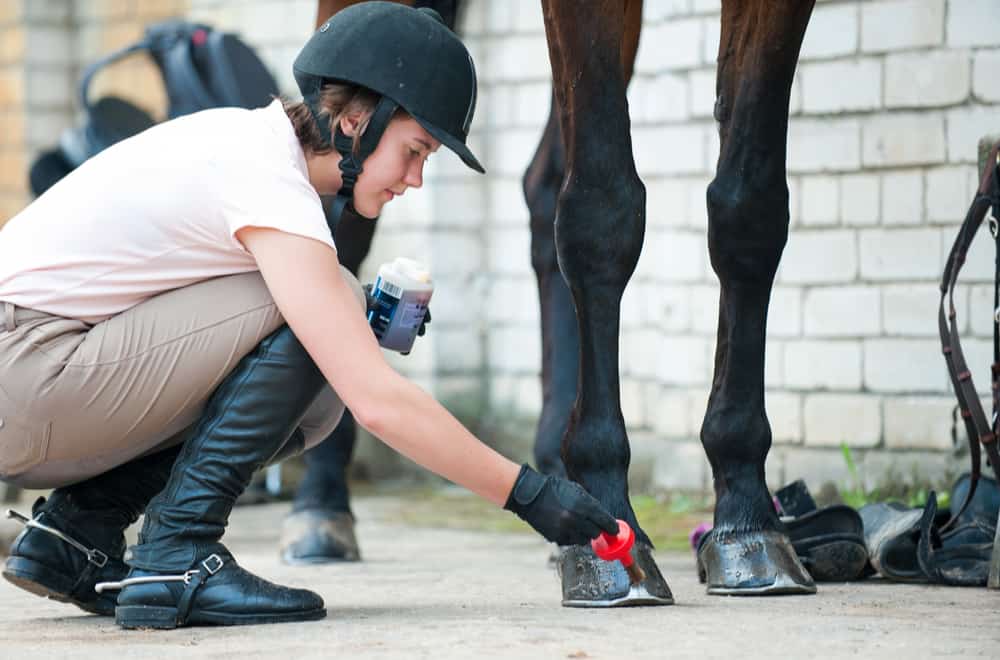 You may start to suspect your horse is hurt if you find them limping or favoring their feet. You’ll need to check the seam between their hoof and their leg to see if there are any wounds or gaps that might indicate damage to the hoof. That way, you can catch detachment early.

If the outer shell is loose but hasn’t fully separated from the laminae, this is called blistering. It still hurts the horse, but the injury can be treated and repaired before it gets worse. But if the hoof cap has already pulled away from the inflamed tissues, that’s defined as degloving.

A horse hoof without a cap is terrifying to look at. It can crush your spirit if you have an especially strong sentimental (or commercial) attachment to the horse. Degloved horses are sometimes put down, but you can still treat the horse and retire them into a softer lifestyle.

A degloved horse (particularly one that lost its hoof caps to laminitis) may need a sling to take the weight off its hurt hooves. They may also benefit from deeper beddings, cold therapy (ice baths / ice boots), opiates for extreme pain, NSAIDs, suitable antibiotics, and lots of rest.

If you Google degloving, you may soon feel queasy because the videos and images are disturbing. So when you’re faced with your own degloved horse, you’ll need grit to keep it together. Especially since the horse can’t verbally express its pain. So start by toughening up.

You may want to distract any kids or teens before calling the vet, just in case the prognosis calls for euthanization. Younger riders might not have the capacity to make that decision, so be prepared to authorize your vet if it comes to that. But there’s still hope, so keep reading.

Degloving isn’t necessarily an instant thing. Once in a while, the horse might step on a sharp, hard object, causing the hoof cap to snap off. But more often the capsule comes loose and slips off painfully over the next few days until it gets fully detached. Daily inspections matter.

They let you spot any injury or damage early on so you can take preventative measures. It also helps to understand how horses move, and the ways their bodies (and feet) evolved to facilitate this. Deciduous hoof capsules are part of the reason younger horses get degloved.

These softened caps allow the mare to deliver the horse without hurting herself too badly. They’re sometimes called the eponychium, fairy fingers, or golden slippers. They can drop off within minutes, and they’ll be gone within three days, but the exposed hoof is vulnerable.

Once the foal starts running around, the fairy fingers will loosen and fall off. But since the permanent hooves beneath are weaker than a grown horse hoof, the foal is more susceptible to degloving. In adult horses, degloving can happen if the hooves are already weak or brittle.

The outer walls of a horse’s hoof are waterproof and weatherproof. So when that shell cracks, breaks or detaches itself, the inner tissues are exposed to over-drying and fungal rot. That’s why treatment should include physical protection against moisture and potential infection.

How to Prevent a Degloved Horse Hoof

Degloved hooves can’t be cured because you can’t just stick the outer shell back into place. You can work on the underlying cause and you can ease the horse’s pain. Nature does help though – the hoof cap can grow back. But it can take an entire year for the hoof to reform.

You’ll need to carefully monitor the horse while the capsule regrows itself. You want to be sure it contours correctly and the exposed tissues don’t get infected. But you also want to keep the horse well-exercised so that their injuries don’t re-open but their legs don’t atrophy.

It can be helpful to see how a hoof detaches from its capsule, just to get an idea of the damage degloving does. The horse in this video is deceased, so remember that the process is much more gruesome in a living horse. The cap is made of keratin and is difficult to dislodge.

Plus, it’s much trickier handling a live horse, especially one that’s in pain. So to dodge degloving from the get-go, here are some tips you could try:

You should inspect and pick your horse’s feet every day to spot any damage. You should also have the vet come by periodically to check the horse’s overall health and look out for illness.

Giving your horse a regular pedicure can reduce the likelihood of its capsules coming off. Plan to visit a professional farrier (or call one over to your ranch) every six to twelve weeks.

Just like trimming, good horseshoes keep your horse’s feet even. This stops the horse from putting too much weight on one foot or stepping awkwardly and chopping off its hoof shell.

How to Help Your Horse Heal from a Degloved Hoof 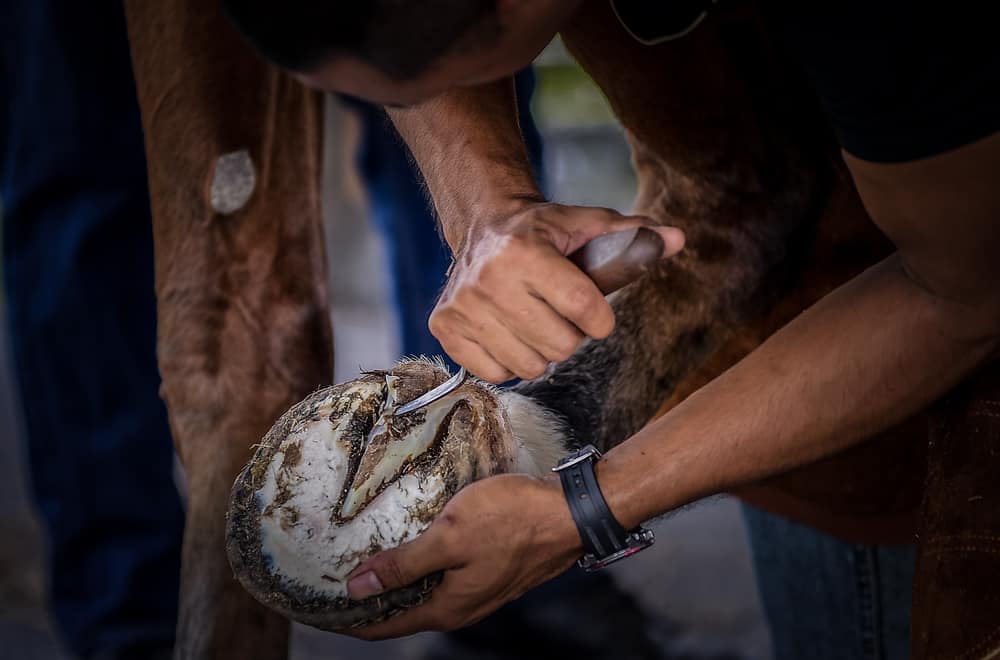 Degloving is the most extreme scenario – when the entire capsule comes off. But it can sometimes start with a smaller injury that takes off a section of the hoof. If you catch it early and treat it well, that portion can recover and regrow without the rest of the cap coming off.

But because it’s a partial regrowth, it may be more deformed than a complete regrowth. After the initial wound, you’ll need to keep the degloved hoof bandaged for 8 to 10 days, maybe as long as two weeks. This allows the hurt hoof to develop protective granulation and scarring.

Think of it as the scab that protects injured flesh and keeps germs out before you can remove your bandage. The hoof cap itself can take 6 months to a year to regrow, but the foot can be left open. It’ll need a shoe though, to stop the horse hurting himself further as he walks.

That healing foot won’t be strong enough to support the full weight of the horse, so while it may seem cruel to shoe a horse hoof without a cap, it’s an important part of the healing process. Plan to carefully put in a new vet-approved horseshoe within six to eight weeks.

Another useful tip – which we touched on earlier – is to fit a protective pad on the healing hoof. This could be a hoof pad filled in with epoxy of a sprayed-on hoof sealant to fill in the cracks. Your vet can advise you on the best local products that meet your horse’s needs.

Maintaining a Horse Hoof Without a Cap

You can clean the degloved hoof with disinfectant soap like chlorhexidine. You’ll also need to keep weight off the foot and use medication to stop the exposed laminae from swelling. That kind of inflammation can cause the coffin bone to rotate and deform as the cap grows back.

Clean the wound and rebandage it regularly – every two days should do. You can also use iodine to clean the wound. Keep the horse in a stall for a few weeks or so. A loose bandage will retain circulation – lax enough to slip a finger between the bandage and the horse foot.

The horse shouldn’t go back to pasture for at least two months, so plan to feed and water the horse indoors, including their prescribed antibiotics and supplements. Spend time with the horse too – your attention and affection will comfort the horse and may speed up healing.

For reference, this video was taken 3 days after the horse sliced off the back of his hoof. He wore compression bandages immediately after the injury and was fully recovered within 10 months. But he’s now a little girl’s pony and can’t do any fast running or heavy farm work.

Once your horse’s hoof cap is gone, there’s no cure. So avoid the drama and stop the pain by:

Do you have any further questions about a degloved horse hoof? Tell us in the comments!

1 thought on “What Causes a Degloved Horse Hoof? (Prevent Tips)”