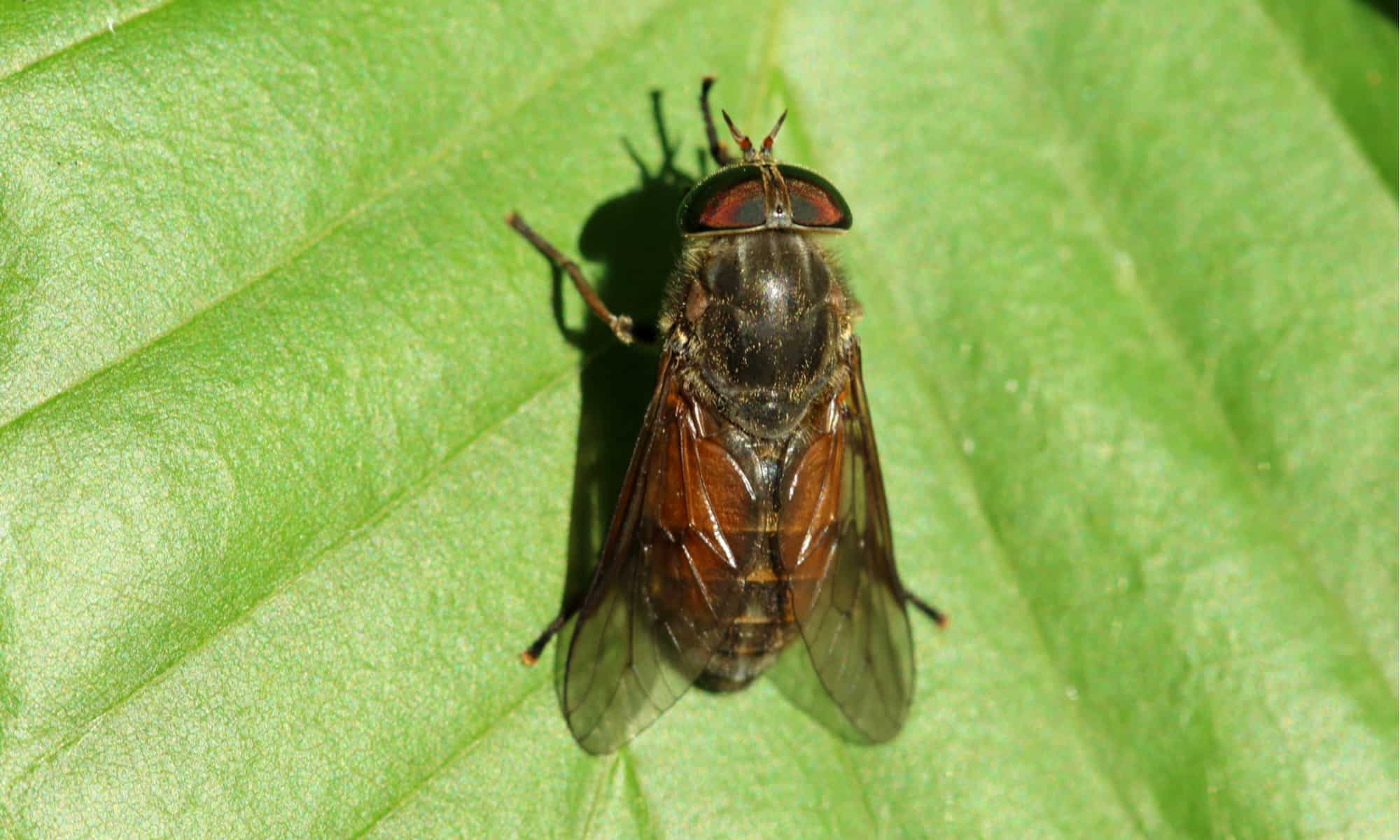 Horseflies belong to the family of blood-sucking insects (Tabanidae) that consists of approximately 4,450 species worldwide. They love moisture, so you will most often find them near water, including a river, lake, or even a pool in your backyard. However, you will always find these insects on pastures and stables because animals are their primary food source.

Unfortunately, their bite is extremely painful and may cause violent allergic reactions. In other words, you will surely recognize it if you find yourself in such a situation. The only way to defend yourself from these menaces is to see why do horseflies bite and what to do when it happens.

The best way to distinguish horseflies is by their size. They are approximately 1 inch (2.5 cm) long and are much larger than the average fly. You can also distinguish them by the color that ranges from yellowish-brown and dark gray to black, often followed by a few vertical black lines.

Their heads are large and disproportionate to the rest of the body, with huge colorful eyes that touch the head top in males.

Horseflies are the most active on warm and steamy days in June and July, especially around forests. They are powerful and fast flyers, flying more than 30 miles (48.3 km) at once.

Remember that horseflies avoid dark areas. Therefore, the stall will protect your horse during these insects’ feeding period, especially in the middle of the hot summer days. 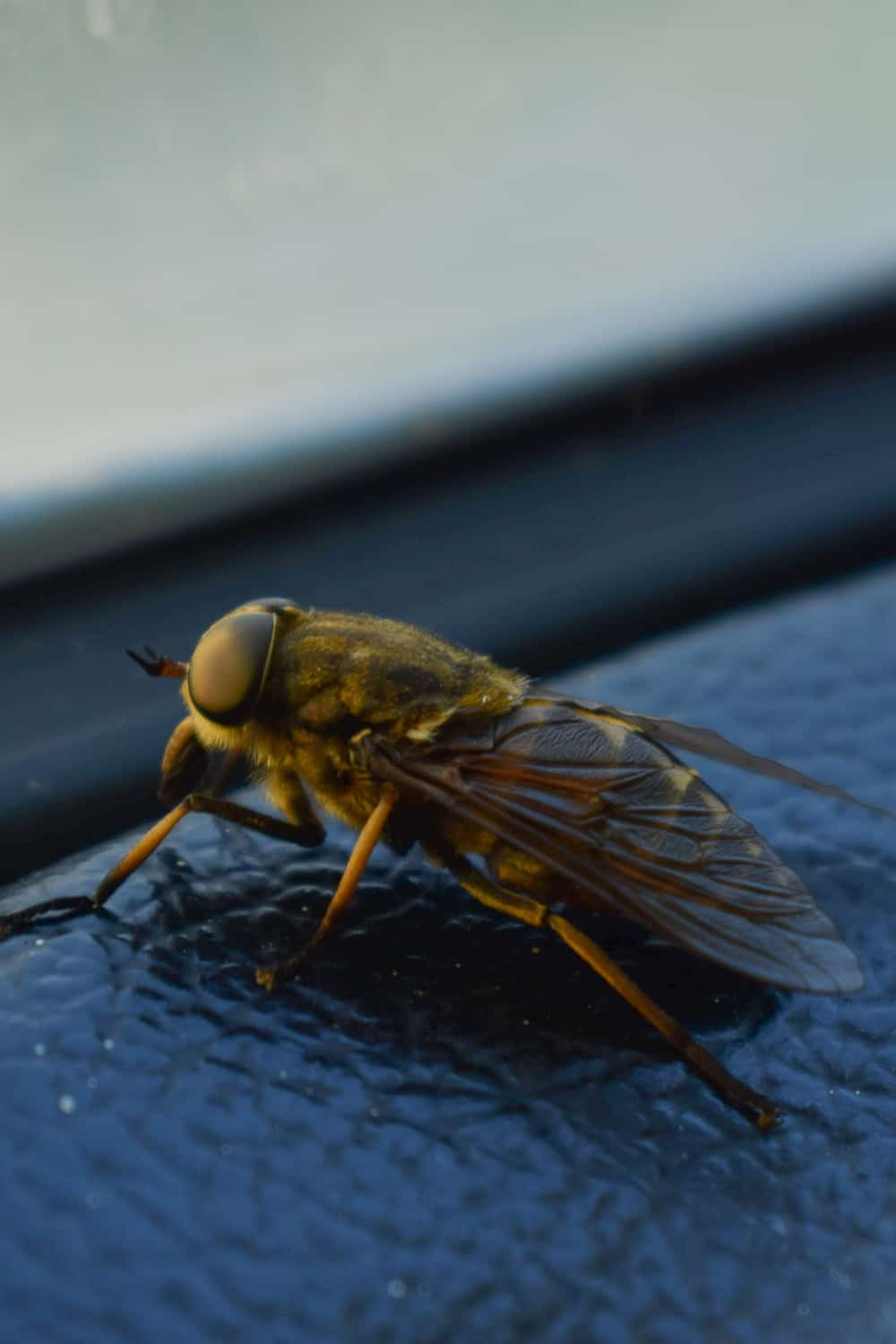 A female horsefly needs at least one protein meal a day to reproduce. In other words, it can provide offspring only if fed regularly with blood.

The female can lay up to 1,000 spindle-shaped and dark eggs at once, but they are laid in layers without taking up too much space. The usual places for this activity are under gravel and in high vegetation. Larvae hatch after 5 to 12 days.

Transformation through 6 to 13 separate larval stages can last 1 to 3 years. During this period, the larvae are in the area of mud or swamp.

They fall out of eggs and are usually buried in the ground and feed on small insects and organic debris. Most larvae mature in the spring and enter the pupal stage.

The pupa (cocoon) phase usually takes place on dry soil and lasts from 6 to 12 days, depending on the environment.

Adult horseflies usually appear in late summer, after the pupa stage ends. They will immediately look for food and a partner. The male will feed on flower nectar, while the female look for prey.

Why Do Horseflies Bite?

A horsefly bite is brutal compared to a mosquito bite. The reason is insects’ mouths, which are perfectly equipped to pierce much thicker skin than the human one. The pair of jagged jaws enter the skin and rupture it until breaking through small blood vessels.

Unlike mosquitoes, horseflies don’t release mild anesthetics, making their bite even more painful. Since anticoagulant in the horsefly saliva prevents blood clotting while sucking, it can take 200 ml of blood in only a few minutes.

Since males horseflies can’t lay eggs, they don’t need blood but feed on nectar as they fly from flower to flower. On the other hand, females need proteins to produce eggs, and therefore they feed on blood.

You will most often see bites on the horse’s abdomen, neck, and legs. The stings appear as painful papules or small lumps resembling a grain of wheat with a characteristic central ulcer. 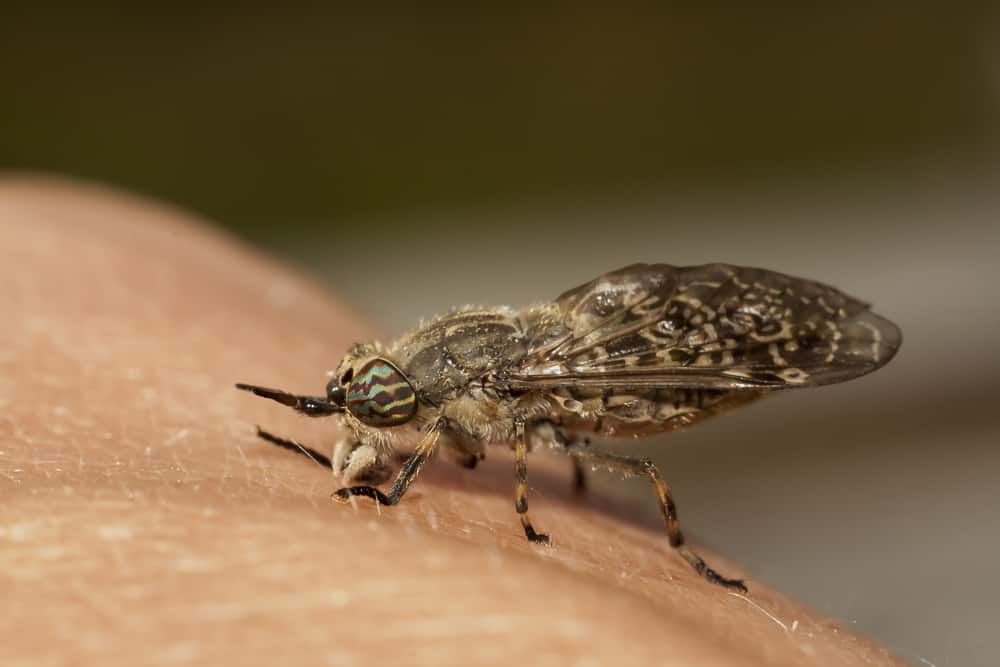 Female horseflies often gather in large groups when they hunt for prey and won’t stop biting until they are fed enough. Their mouths are composed of:

A fly bite causes immediate, intense pain due to cutting the skin. When the tiny blood vessels are punctured, the bleeding and the process of feeding the fly begins.

Saliva injected during the bite causes a feeling of sharp burning. You can see bruisings on the skin around the bite site and sometimes symptoms of allergic reactions due to histamine release from damaged tissues. Such condition is followed by:

In addition to the presence of pain, the bite of a horsefly is also characterized by:

Severe allergic reactions to horsefly bites are not common but are possible, and they are typically followed by:

A more serious allergic reaction or anaphylactic shock is rare but requires an immediate response. Call an ambulance if you notice these symptoms:

Keep in mind that the increased allergic reaction may occur in people who have already encountered a horsefly bite due to the body’s immune response. Therefore, you should be careful if you have ever had a severe allergy and always wear an emergency epinephrine injection to treat possible future bite reactions. 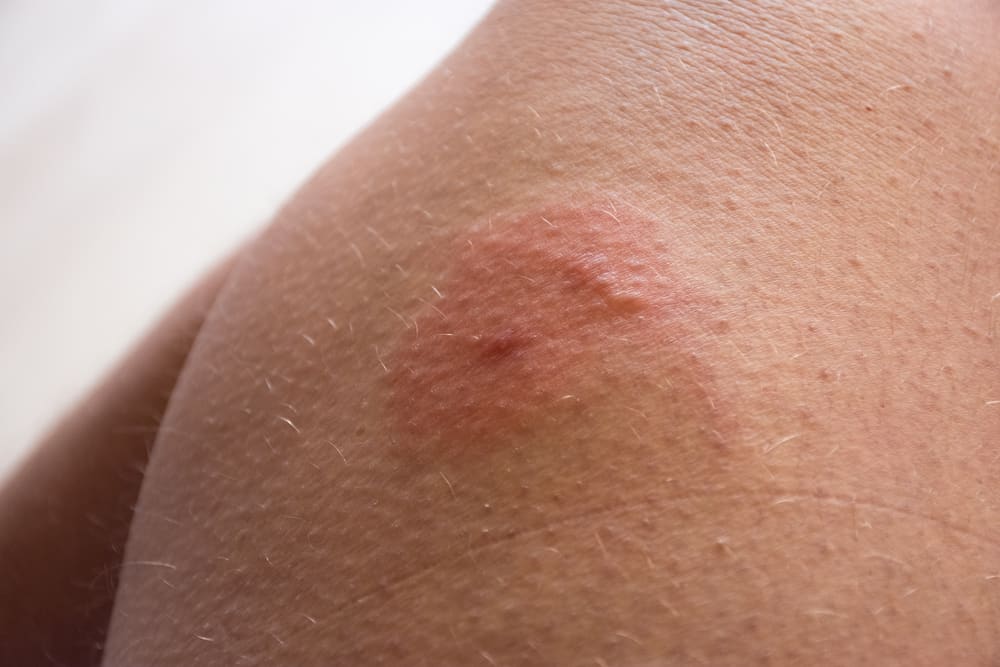 The skin can become more susceptible to infection after horsefly bites more than after other insect bites due to extensive damage. Therefore, it is necessary to pay attention to the potential signs of infection.

Generally, the bite area calms down within three days. However, contact your doctor if the bite becomes infected to prescribe you antibiotics when needed. What you can do at home after a horsefly bite is:

The Danger of Horsefly Bites

Most often, a horsefly bite is not dangerous to humans, except for the current pain. However, it can be harmful to your horse or even your dog if it is a member of a larger breed.

Horsefly bites transmit contagious horse anemia (swamp fever). After infection, the horse usually has a fever, bleeding, and general weakness. The animal can pass without symptoms in some cases, but it can spread the infection to other horses.

Like horses, there is a good chance that your dog will pose a significant danger to other animals due to the spread of the infection. However, they are less likely to be endangered than horses. As with humans, irritation after a bite usually lasts a short time. The most affected areas in dogs are the neck, abdomen, and legs. 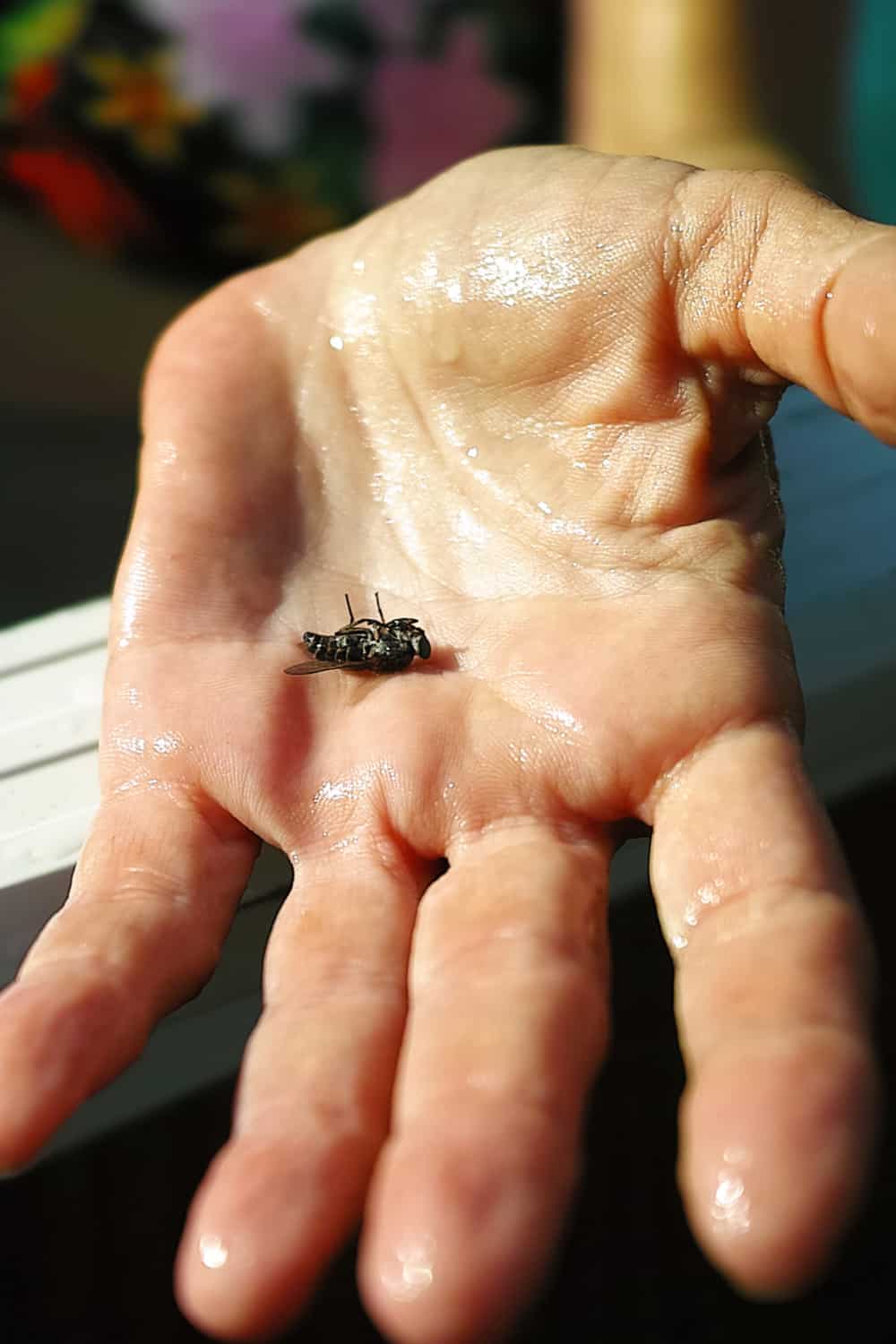 Horseflies seem to bite some people more often than others. The reasons for this are clear, but you can look at what attracts their attention:

When you consider all of the above, it is clear that a swarm of horseflies will chase you if you come across them during regular training around the lake in the summer.

As these insects are known for persistence, you won’t shake them off until they bite you or come across someone else who will attract their attention. Another option is to kill them.

Luckily, these creatures are without significant environmental impact, so getting rid of a few won’t harm anyone.

Since their habitats are widespread, it is difficult to avoid problems with horseflies in the summer. They are much more common in rural areas because of the presence of pasture and livestock. However, you can use some plants to repel them, such as:

You can also fight outdoors with citronella candles and UV insect repellents. However, I can give you a few practical tips that can help you:

The horseflies can cause pain with their bite, transmit infectious diseases, and generally cause discomfort to humans and animals alike.

Since they are a rare species without a significant impact on the ecosystem, killing them is an excellent prevention of possible problems. Be aware that their role in bird nutrition is almost negligible, so such an action won’t endanger the environment.