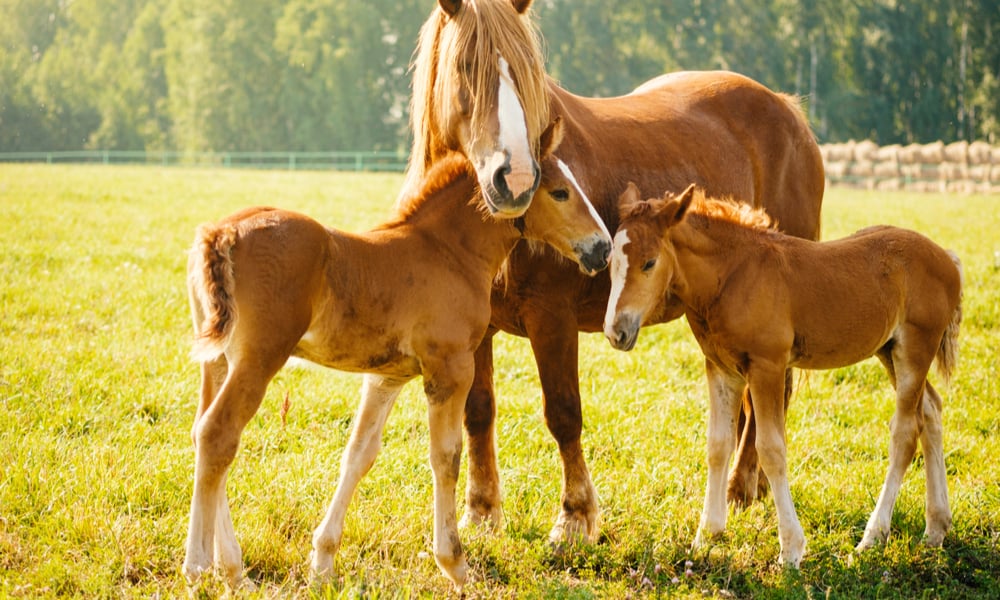 Diets differ around the world, and some of the things we consider delicious are seen as vile and tasteless by others. For starters, why don’t we eat horses in America even though we’re one of the world’s leading exporters of horse meat? Lots of other countries consider it a delicacy. As we look into our national aversion to chevaline, we’ll see why others love it too. 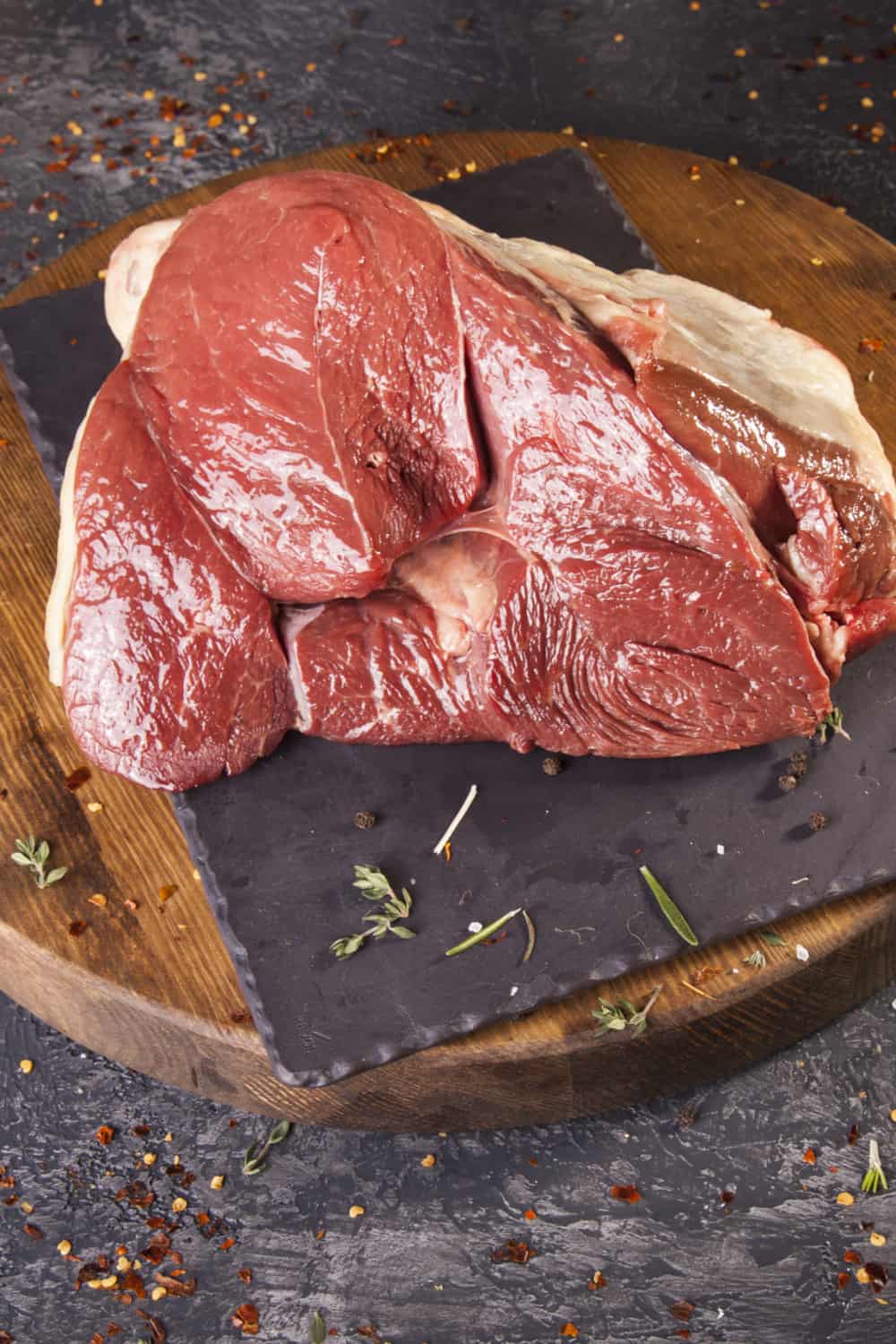 Why don’t we eat horses in America? Our reasons include medical contamination, religion, companionship, and impracticality. Let’s look at these reasons (and a few more) in detail.

In many traditional societies, horse meat was an important part of pagan ceremonies. They were sacrificed to gods and goddesses like Odin (Norse), Epona (Gaul), Rhiannon (Wales), and Macha (Celts). Christianity spread and Pope Gregory III banned horse meat in 732AD.

Islam considers horse meat makruh, not haram. Meaning you can eat it, but it’s not advised. Under Judaism, horses are not kosher because their hooves aren’t split and they don’t chew cud. They’re kashruth – forbidden. These three religions are anti-horse meat.

People who eat horses say it tastes a lot like beef. They claim that if nobody tells you, you can’t even tell the difference. But horses have less meat on their bodies than cows do, so it’s less profitable to rear them for food. So exported horse meat often comes from mustangs.

Horse meat might also come from retired racehorses and old ranch horses. Because they might be euthanized and sometimes use supplements while they’re alive, those chemicals could pass onto your plate. So horse meat is generally avoided since it could contain toxins. 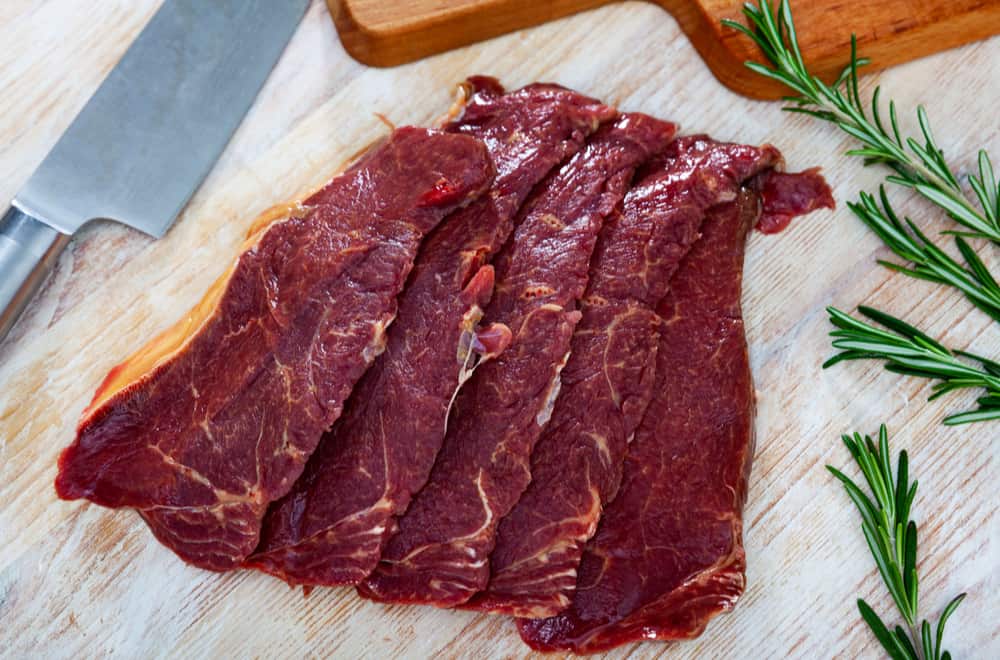 One of the best things about America is its mixed heritage. First, second, and third-generation citizens carry their cultural practices and ancestry, enriching our food and faith. But in some of those countries, eating horses is taboo, so they brought their belief with them.

Nations that refuse to eat horse meat include the Romanis, Jews, Brazil, Poland, the UK, and most English-speaking parts of Canada. But in France, Italy, Scandinavia, and northern Spain, horse meat is a common dish. In France, chevaline took hold during The Revolution.

Chevaline was initially confiscated from aristocrats and fed to peasants. And in many parts of the world, dead warhorses were ‘seasoned with gunpowder’ for the hungry troops. It’s considered ‘poor people food’ in places like Russia, where it’s seen as low-quality meat.

Horse meat is also popular among nomadic communities in Central Asia and indigenous communities in North America. This creates class-based stigma that makes some avoid it. Others see horses as beloved pets, just like cats and dogs, so they would never eat a horse.

As you’ll see later, many commonwealth countries avoid horse meat while Aryan, Scandinavian, and Francophone countries are less averse. Nations that were colonized by France and Belgium are therefore more likely to eat horses while British colonies dodge.

In North America, this means the parts of Canada that were under France are still okay with eating horse meat. But according to an episode of the Joe Rogan podcast, the USA – which was once a British territory – largely followed the Queen’s Decree against eating horse meat.

When we think of horses, we think of cowboys and rodeos. Or we might think of posh equestrian sports. This makes horses cool and companionable, unlike cows or chickens. We don’t see them as food. This differs from nomadic cultures, which also valued their horses.

Yes, Central Asian communities hunt and work with their horses, but these horses – though beloved – are still seen as livestock. So just like they’d kill a chicken when it stops laying eggs, or a cow too old for milking, they eat their aged or injured horses. We Americans don’t.

Vets provide a rational reason why we don’t eat horses in the US. Whether the horse lived its life playing polo, entertaining rodeo crowds, or providing equine therapy, they have a lot of drugs in their systems. These include NSAIDs and other chemicals prohibited by the FDCA.

But – just off the top of your head – how many pop culture horses can you list? Disney is full of them, and there are at least ten movies and TV series named a variant of Black Beauty or Black Stallion. This means your average horse is an aspirational creature, not a menu item. 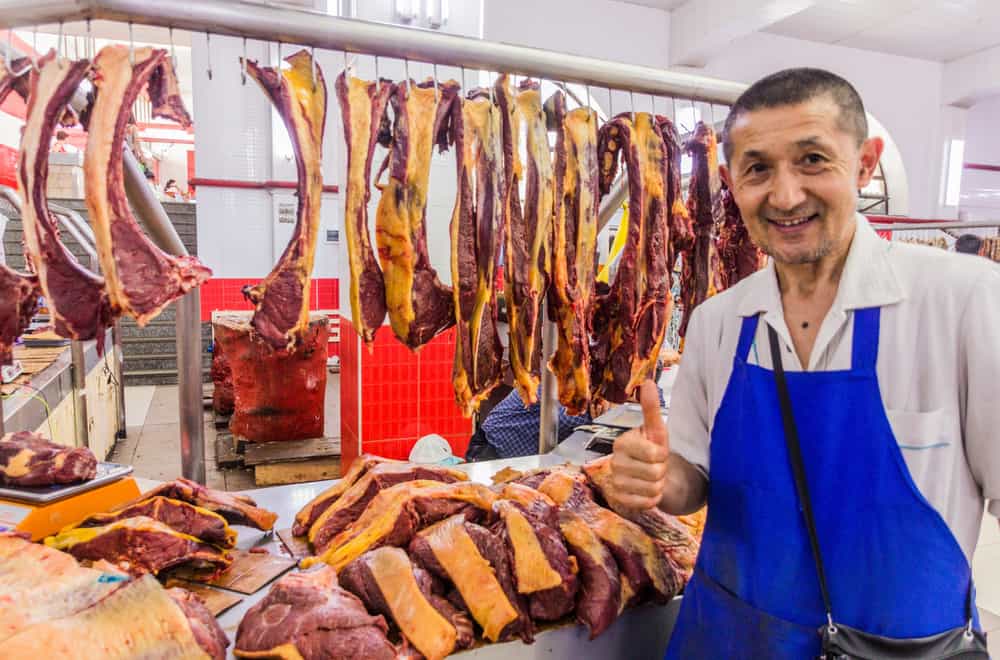 Other countries – especially in Europe – have specialized butcheries that sell horse meat. But in the UK, the US (and Australia), mustangs (and brumbies) are shipped live, sometimes with equine passports. Here in the US, the last horse abattoir was shut down in 2006.

So even if you can eat horse meat with a clear conscience, there’s no place to easily buy it in America. If you could buy it at the supermarket or street stall (as you can in Europe and Asia), a few of us might be willing to try it. But slaughtering a horse at home makes no sense.

People who work in commercial ranches have no problem eating beef, chicken, or turkeys. Even at organic farms where livestock are reared by hand, your kids won’t throw a tantrum if you serve Bessie or Clucky for dinner. But most of us struggle eating animals we recognize.

It’s why vegetarians suggest we spend time with cows or goats. Or that we should only eat animals we’ve killed ourselves. So because we have more contact with them than other animals, eating Merrylegs can seem disgusting, repugnant, and cruel. Horses are our friends.

In Asia, people often eat cats and dogs. But younger generations – particularly in urban areas – are starting to avoid these animals. At least on their plates. They prefer them as pets, and some see them as family members. Americans have a similar romantic view of horses.

We think of wild horses as symbols of freedom, power, and spiritual connection. Horses make us think of fancy country clubs, civil war re-enactments, beloved western outlaws, or country music videos. None of these cultural concepts would make you want to eat a horse! 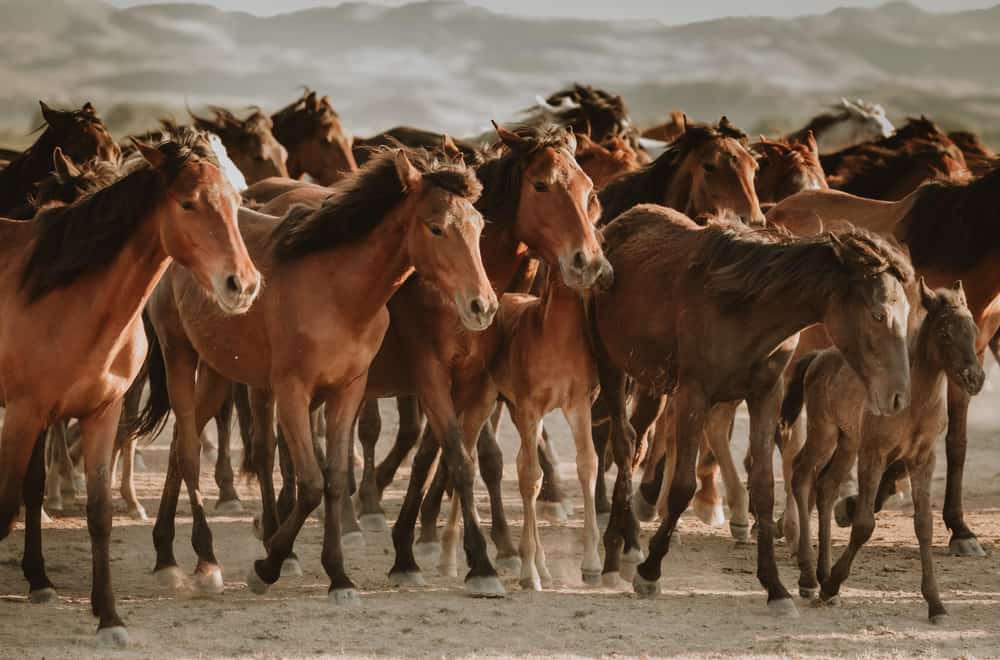 The BLM (Bureau of Land Management) takes care of most of America’s mustangs. And they’ve reported the horse population is almost double what they can realistically manage, especially with budget cuts. Other wildlife like wolves, snakes, and feral pigs are often culled.

But the idea of hunting horses, putting them down, or even enhancing their contraceptives seems nasty to the general American population. We see horses as a rugged, unmatched symbol of our national spirit, just like American eagles. How can we possibly eat them?!?

Ask anyone what comes to mind when you say ‘cow’. They’ll probably say ‘milk’ or ‘cheeseburger’. But if you ask anyone to do a word-association exercise about horses, they’ll say things like beautiful, majestic, or fiery. Even if they’ve never seen a horse in person!

Horses have a pretty good PR team. We don’t think of them as scary or dangerous, even though they can kick you, throw you, or paralyze Superman. Any netizen can tell you horses have pretty privilege, just like koalas and strawberries. Beauties like that just can’t be eaten.

If you’ve worked at a farm or visited a petting zoo, then you know any animal can express personality. But horses show it more clearly. Yes, they say cows have best friends, but even the most inexperienced person can look at a herd of horses and say something about them.

At a glance, you can see which horses are shy or hot-tempered, or lazy. We even breed horses for trainability, and we know which breeds are great with kids. Since horses seem like such distinct personas, it’s easier for us to see them as individuals and harder for us to eat them.

Countries Where Horses Can Be Eaten

In the American mind, horses are for riding, not eating. No matter what Dave Duquette says! But in case you’re immune to pony propaganda and have a hankering for horse meat, here are a few places you can sample some horsey delicacies. None of them are in the US though! 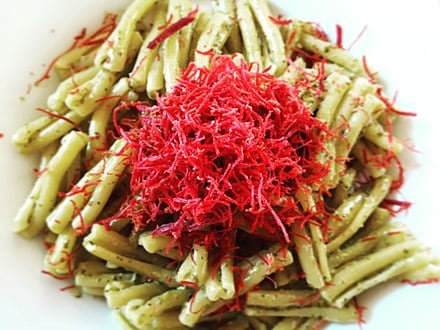 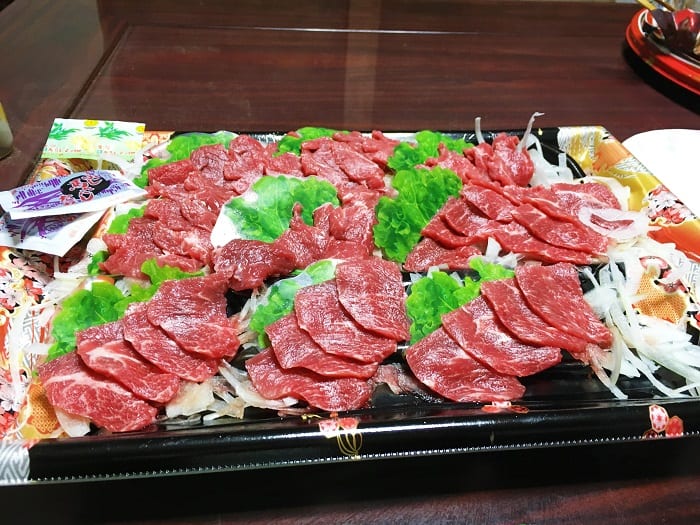 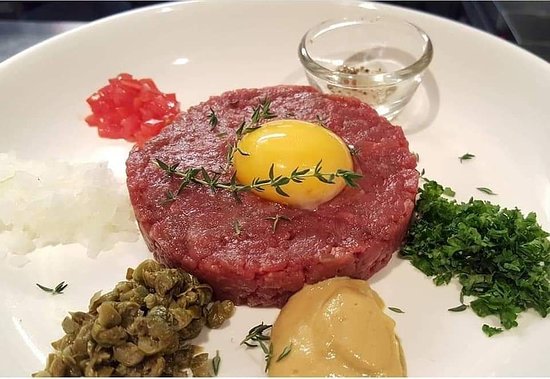 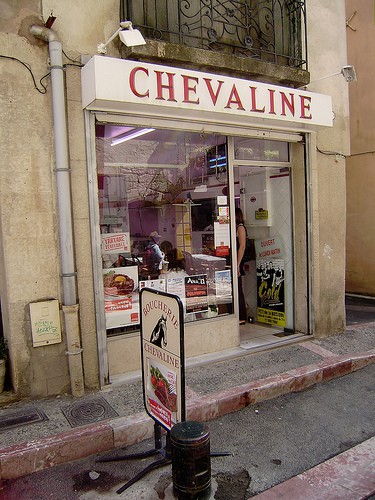 While you can ask for horse meat in the places above without raising eyebrows, it’s still considered a taboo dish by most. But like many countries, we export tonnes of horse meat.

Should You Eat Horse Meat?

While horse meat is an acceptable dish in many parts of Asia and Europe, Americans prefer to sell it overseas. So why don’t we eat horses in the USA? Here are a few reasons:

Of all the types we’ve looked at, which horse meat would you try? Tell us in the comments!