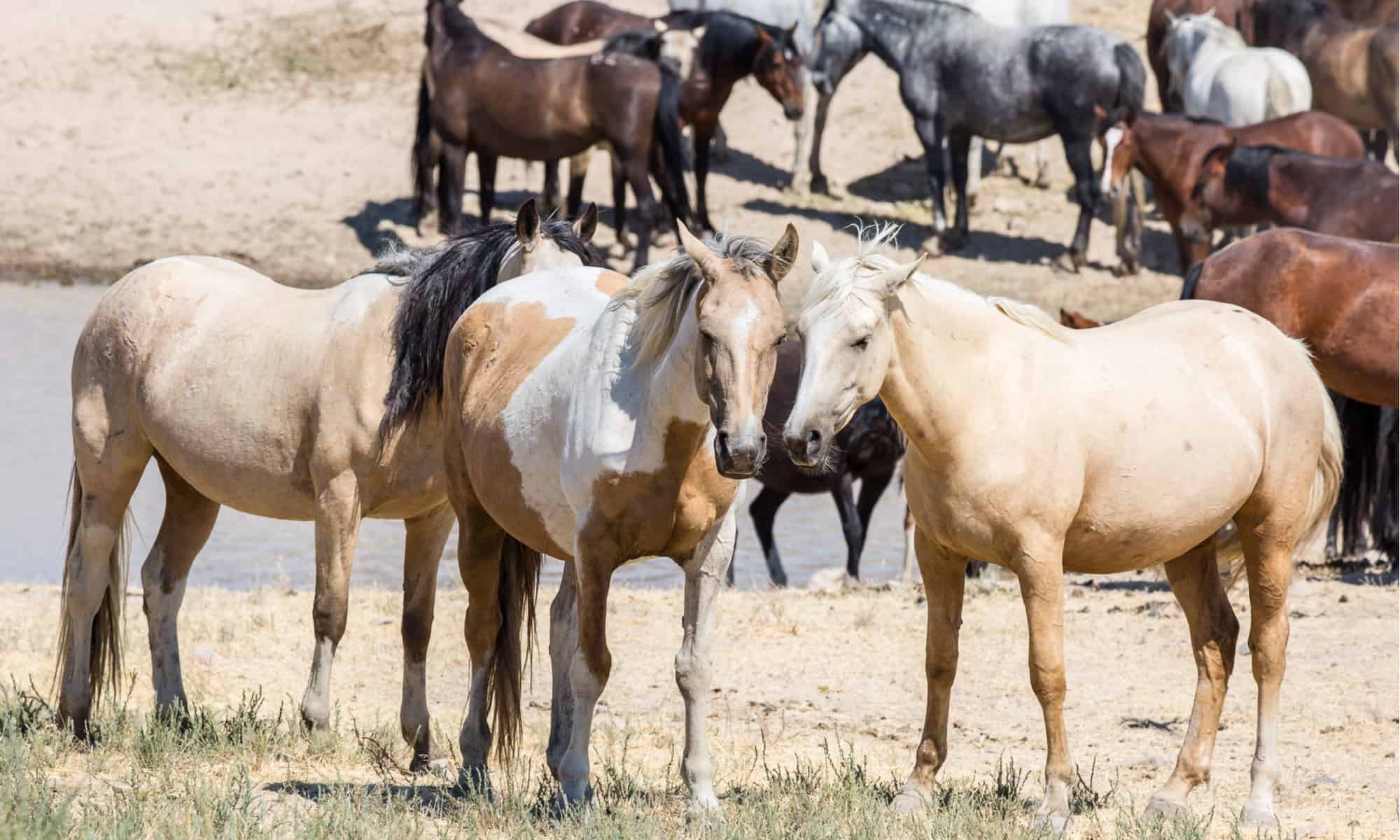 When it comes to horses, most of us know only the calm, domesticated breeds we see in stables, feeding on hay, grain, and other mineral-rich feeds. But did you know that horses live in the wild too? That’s right!

Some horses live in the natural ecosystem, interacting with other wildlife species such as deers, elks, raptors, wolves, mountain lions, and more. And unlike tamed breeds, wild horses mostly feed on grass, twigs, leaves, and sometimes even tree bark.

Eager to dig more into the question, “Where does a horse live?” Stick with us as we explore the horse’s natural habitat.

Wild Horses At a Glance

Wild horses, also known as stray horses or mustangs are descendants of the Indian ponies and Spanish mustangs. ‘Mustang’ is coined from ‘mesteno’, a Spanish word that means wild or stray.

Mustangs predominantly live in groups called bands, with each band consisting of a leading stallion usually five years of age or older, a leading mare,  and a few more mares.

The stallion’s main job is to protect the band from attacks and predators, hence, it always stays near the back of the herd.

The dominant mare, on the other hand, remains in the front, leading the group in its travels. It will show the herd where to sleep, eat, drink, and dig for mineral licks. Here is a short video that summarizes the life of a wild horse in its natural habitat.

What Is Wild Horse Habitat’s Terrain and Climate Like?

Horses living in the wild survive in relatively severe conditions, within arid and semi-arid plains, grasslands, prairies, deserts, and badlands. They move from place to place in search of shelter, vegetation, and adequate water.

In this habitat, horses will feed on desert grasses and vegetation such as sagebrush, bluegrass, wheatgrass, Utah juniper, Indian ricegrass, and mountain mahogany.

While this foliage grows in low-level areas, wild horses prefer to feed in steep, hilly terrain. You will find them in isolated plateaus, foothills, and medium to steep slopes. Their solid body shape and strong feet make it possible for the animals to naturally endure a wide range of rough terrain and surfaces.

How about the climate?

The majority of grasslands and prairies where horses reside have nearly desert climates and very little plant growth. Rainfall in this ecosystem does not go beyond 40 inches a year. As such, there are fewer water sources, which also means there isn’t much food for the horses to survive on.

What Do Wild Horses Eat and Drink? 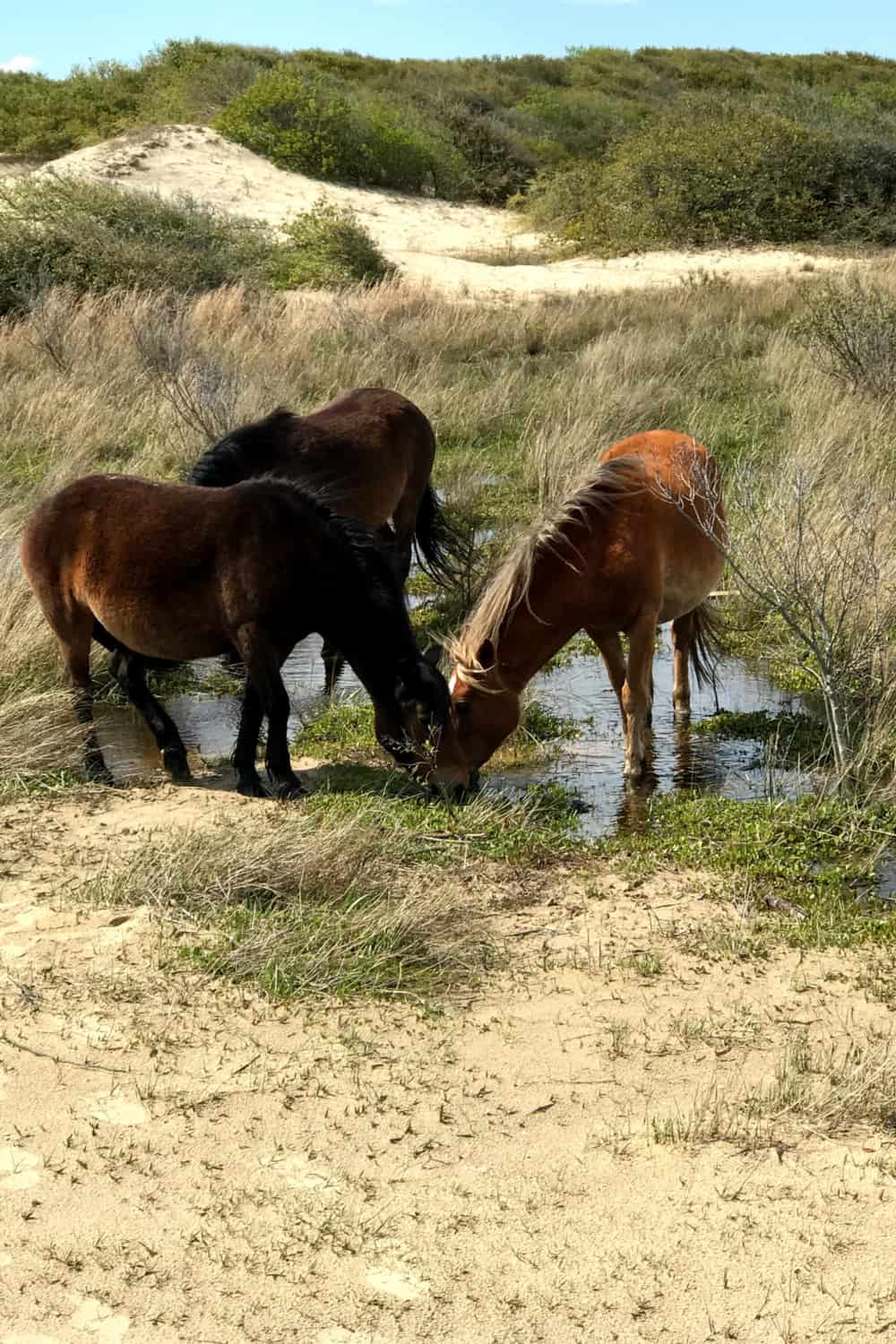 Wild horses mainly live on grass. Where the grass is scarce, you will see them feed on roughage such as leaves, twigs, bushes, or tree bark. A mature mustang will consume about six or seven pounds of plant food in a day.

And when it comes to water, wild horses will drink from springs, lakes, seasonal streams or rivers, or water pools. They will come here two to three times a day to quench their thirst and look for natural mineral deposits.

However, unlike other grazing animals, instead of inhibiting the areas surrounding water sources, horses will drink and move on. They will visit a water source every four to five days when the temperatures are not too high and go back to higher territory.

Wild horses can smell moisture in the atmosphere and will find new water sources quickly after a rainfall. They will drink and return to an elevated site to take shelter.

However, during dry months of summer, fall, and spring when there is water scarcity, you will find herds of wild horses camping near water sources.

Do Wild Horses Have Predators?

Yes, they do. Their main predators are wolves, mountain lions, and black bears. Nonetheless, wild horses experience lower threats than deer, gazelles, and other smaller grazing animals. Their survival rate is above 90%, with most herds constantly increasing by 20 to 25% every year.

But why are horses not threatened by natural predators like other grazing animals are, you may ask?

You see, wolves, for instance, are small in size, hence, they do not have the strength to ambush and kill a healthy, mature horse. This leaves mountain lions and black bears as the main horse predators.

Now, even though these two have the capacity to attack and kill a full-grown wild horse, they do not run at a speed high enough to catch and bring down a horse.

What they do is observe the herds of wild horses from a distance and wait for newborn foals or injured, weak horses. Herds with aging horses are also a target for such predators.

How Are Wild Horses Adapted to Their Natural Habitat? 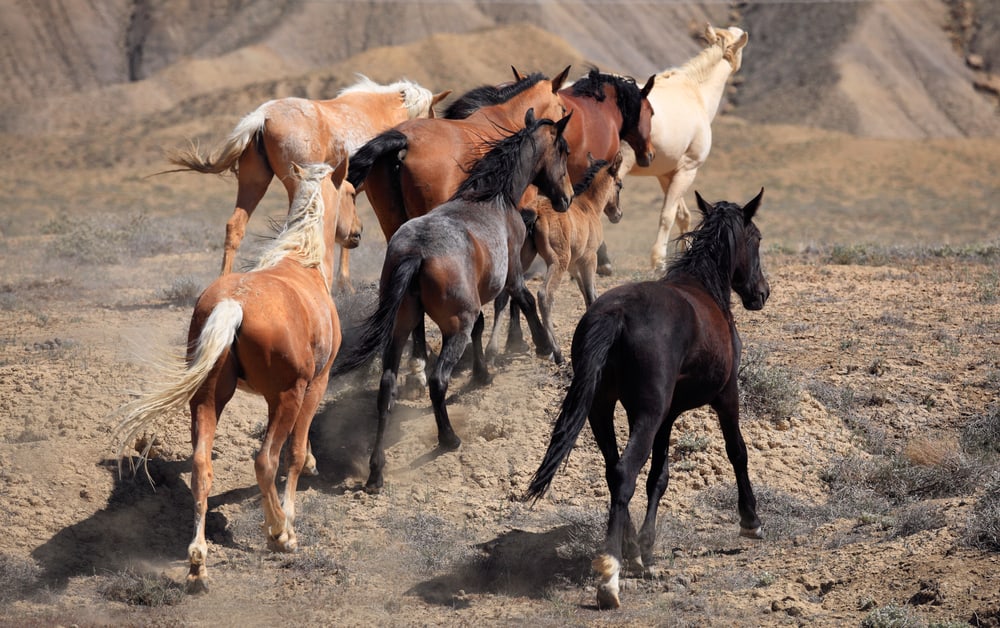 If you have read all of the above, then by now you know that wild horses live in a harsh habitat that is prone to dryness, extreme food and water scarcity, and attacks by predators.

So how do they survive?

1. They Can Tolerate Low Nutritional Foods

Wild horses are herbivores, which means, they only eat raw grass and grain. However, because they mostly live in semi-arid areas, grazing lands are minimal and the available ones grow vegetation that has low nutritional value.

Often, particularly during the hot, dry season, there is very little vegetation on the grazing lands. But wild horses have learned how to survive on scarce, low-quality food.

As we stated earlier, wild horses live in herds with one dominant stallion. While the stallion is responsible for providing protection, living in herds also keeps the animals safe from predators.

Young males that do not need their mothers’ care but haven’t reached the age of breeding live in the herd with their mothers.

However, once they reach four or five years, these males start to attract fillies (females) from other groups to join them. But as soon as they are discovered, they are kicked out of their mothers’ herds to start their own herds, where they become stallions and offer protection to the mares in the group.

3. They Know How to Get Water

Even when atmospheric conditions make it difficult for animals in the wild to access water, mustangs know how to keep their bodies hydrated.

During hot, dry seasons, they will chew through spiky cactuses to draw water from the plant. And when cold winters cover springs, rivers, and water holes with ice, mustangs will carefully break through the edges of these water sources without putting themselves in danger of sinking into the ice.

In the wild, mustangs live with wolves, bears, and mountain lions that are always targeting young, vulnerable foals. For safety, wild horses’ babies are born with a sandy color that mixes well with the surrounding environment.

They are also very quick; they will stand within minutes of being born and start running about in just a few hours.

Current Situation of the Natural Horse Habitat In the United States 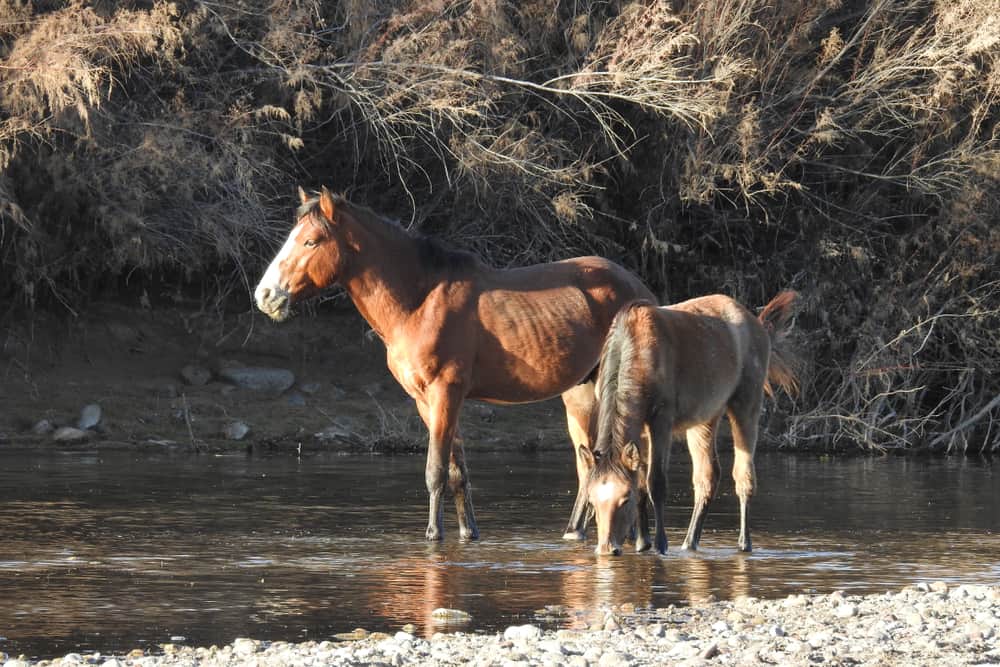 The wild horses of today are experiencing problems that their predecessors did not. For starters, they are not allowed to roam freely.

In countries like the United States, for instance, the government has set aside a limited grazing area for mustangs that they share with livestock and other grazing wild animals like deer, gazelle, and antelope.

And given that the population of wild horses is continually growing, there is a constant need for a considerable amount of forage, meaning, the controlled grazing range is not ideal for animals that need to stay healthy.

However, with monitored roaming ranges, many of the predators that were previously threatening wild horses have been eradicated. According to the Bureau of Land Management, there are thousands of baby horses born in these fields every year.

While this may guarantee the continuation of wild horses, the high rate of birth and fewer predators has caused today’s herds to become overpopulated, which has resulted in a scarcity of grazing areas.

Every year, therefore, the Bureau of Land Management removes thousands of horses from the controlled zone and gives them out for adoption by private owners. This helps prevent overpopulation, which in turn maintains enough food supplies for the remaining horses and wild animals.

But what has this done to the holding facilities?

As of 2013, the Bureau of Land Management had over 45, 000 mustangs in these facilities. The horses have been removed from the range but still haven’t found people to domesticate them. It is actually reported that there are more mustangs in holding facilities than there are in the grazing ranges.

Contrary to what many people think, horses don’t live just as domestic animals; there are some that live in the wild too, in arid and semi-arid habitats. Such horses have learned to adapt to the environment not only to find food and water but also to protect themselves from predators.

In most countries, however, governments have set aside controlled grazing fields for horses to eradicate predators, prevent overpopulation, and regulate food supplies.