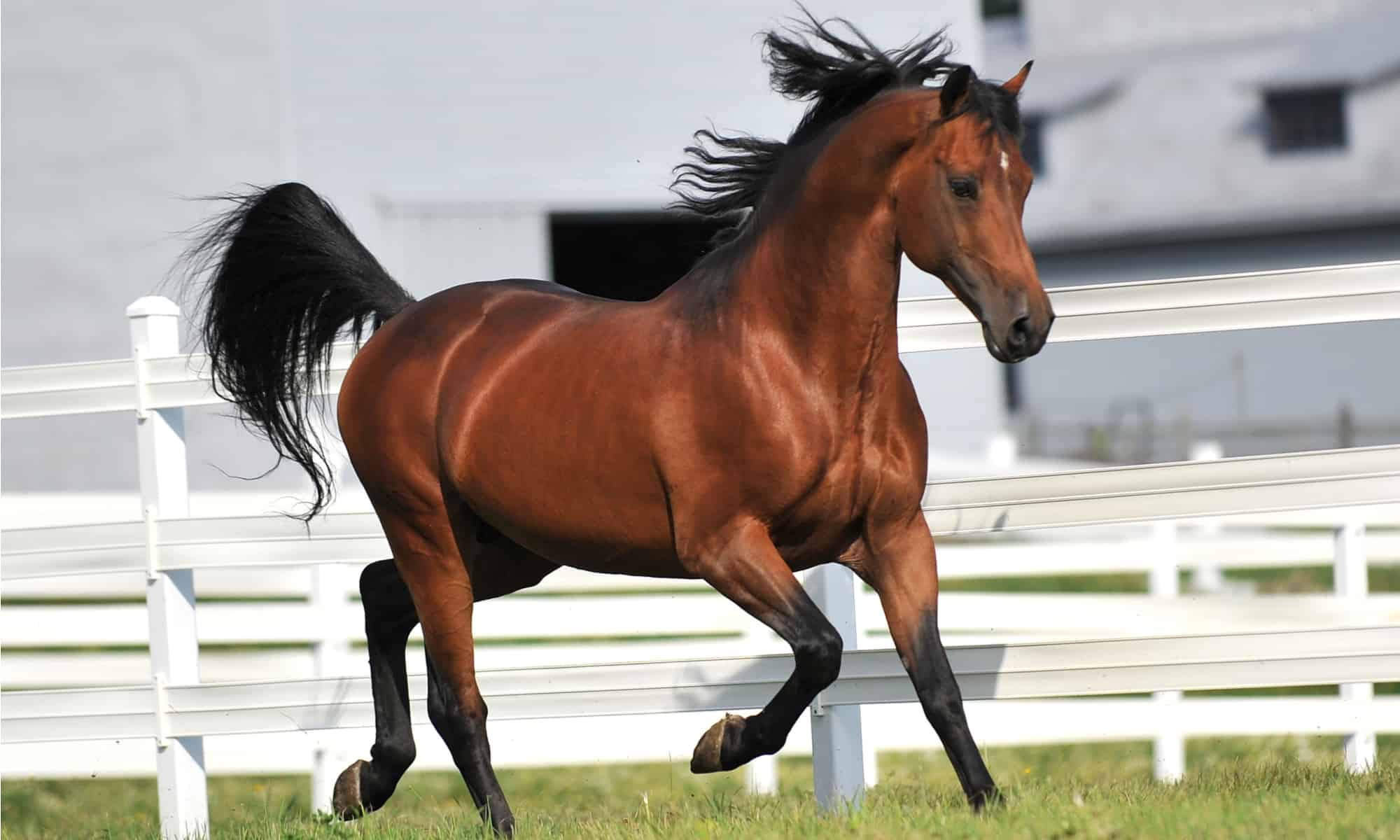 States use designated symbols such as animals, plants, and other tokens to espouse their region’s history and culture. Unsurprisingly, horses are a popular choice for state symbols—they signify power, freedom, wealth, and intelligence.

If you are curious about the state horse of Massachusetts, you have come to the right place. This article explains everything you need to know about this popular equine, fondly considered America’s first horse breed. Read on to learn more!

The State Horse of Massachusetts

Massachusetts, officially known as the Commonwealth of Massachusetts, is located in the New England region and is the most densely populated in this area. With Boston as its capital, Massachusetts has a long and rich history.

The state is ranked as one of the best to live in America. It is home to some of the world’s most highly regarded academic institutions, such as Havard and MIT.  It was also the heart of two significant revolutions: the American Revolution and the Industrial Revolution.

Massachusetts was initially dependent on trade and agriculture, with the horse playing a significant role in the state’s economy. The state horse of Massachusetts is known as the Morgan Horse.

The Morgan horse played many roles, including serving as a cavalry horse in the American Civil War. Over the years, various breeding programs have resulted in popular American breeds that can be traced to the original Morgan horse. Some of these are the Tennessee Walking Horse and Standardbred. Others include the American Quarter and the Hackney Horse, found in England.

It is estimated that there are more than 170,000 Morgan horses and Figure’s ancestors in the world, with most of these located in the United States.

Let us take a look at the history of this horse breed.

The History of the Morgan Horse

The elegant and dynamic Morgan breed is a descendant of a stallion known as Figure. Figure was born in 1789 in Springfield, Massachusetts, and the Morgan was designated as the state horse in 1970.

Ealy documentation shows that Figure was approximately 14 hands tall and weighed about 1000 pounds. His true parentage remains largely unknown, but folklore has it that Figure’s sire might have been a thoroughbred, who aptly went by Beautiful Bay.

Figure was not only popular for his versatility and ability to engage in all kinds of activities; he was also known for his great looks, strength, build, and temperament, which he easily passed on to his descendants. I recommend watching this video to learn more about the interesting history of Figure the state horse.

Justin Morgan was reared as a breeding horse. But, he was only able to sire six offspring sons during his lifetime. Three of Figure’s sons went on to become stock horses for the Morgan bloodline. The most popular of Figure’s three sires was Sherman. He was a hand or two shorter than Figure but embodied all the other characteristics, including the chestnut-colored hair. Sherman’s offspring were known as Black Hawk and his grandsire Ethan Allen.

Black Hawk went ahead to sire the Tennessee Walking Horse, American Saddlebred, and Standardbred. Black Hawk excelled in and set unbeaten standards in the harness racing category. Ethan Allen, Black Hawk’s sire, also had a significant influence on the Morgan bloodline and was used as a foundational stallion for trotting breeds.

Figure’s other offspring were Bulrush and Woodbury. Woodbury was sought after for his majestic looks and chestnut coat. He was a towering horse, standing at 14.3 hands and weighing 1000 pounds, the same as Figure. Woodbury was stood at stud for many years before his retirement and eventual passing.

The other son, Bulrush, was also the same size as his sire. He, too, broke records in harness racing, specifically in the speed and endurance categories.

There is no doubt that the state horse of Massachusettes played a significant role as the foundational stallion for some of the most popular equine breeds in North America and England.

We’ll talk some more about the Morgan bloodline.

Figure died in 1821 after succumbing to injuries caused when another horse kicked him. His owners buried him in Tunbridge, Vermont. Vermont was Figure’s final resting place, where the Morgan Horse is also the animal symbol of the state.

Characteristics of the Morgan Horse 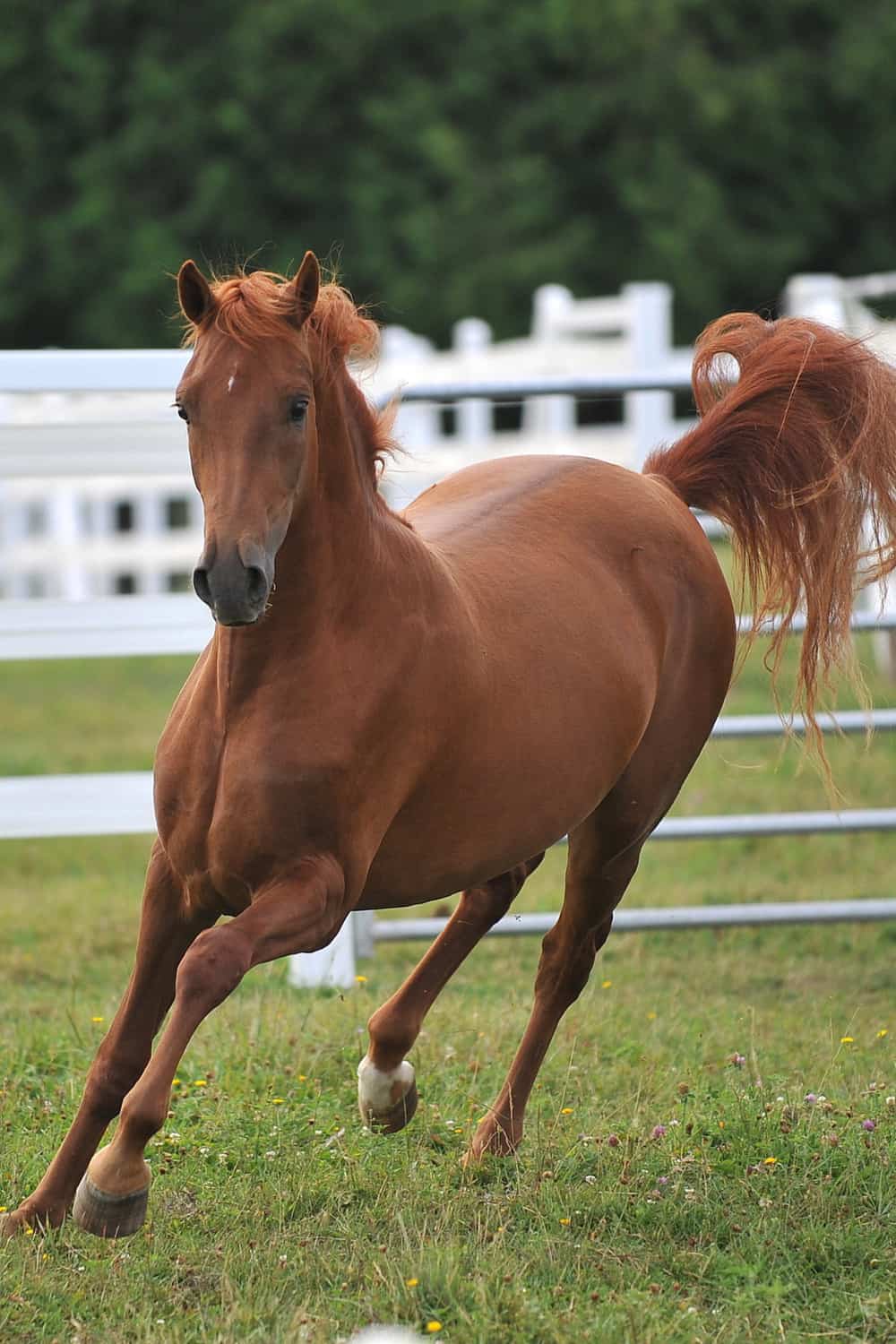 The Morgan horse was famous for its stunning looks, and majestic gait passed down to his descendants. The breed is typically chestnut, black, or bay in color and sports a compact build with sturdy and strong-muscled front and hind legs.  Morgans stand at 14 to 15 hands tall, but it is common for some breeds to be slightly taller or shorter.

The horse has a short back, straight profile, an impressively arched neck, and relaxed shoulders. The neck is also well-muscled, while the head is well-defined and the eyes are piercing. In addition, the Morgan horse boasts a high and straight tail that adds to its elegance.

There is no doubt that the Morgan horse and his descendants are a strong breed. Aside from his impressive physical attributes, this horse is also known for its easy-going temperament and intelligence. This horse is easily trainable and easy to keep, which explains why it was the breed of choice for everything from general riding, freight pulling to harness racing.

Each horse has his unique gait. The Morgan Horse boasts a well-defined, energetic, and bouncy gait. In fact, this breed is known for and sought-after for its strong gait that shows off a nice balance between the front and hindquarters.

Most Morgans come in an attractive chestnut color, but it is also common to see black and bay varieties. Although less common, some of Figure’s descendants come in attractive colors like buckskin, palomino, roan, and gray. Even rarer are the patterned Morgans, but those are truly only a handful.

Since siring his first offspring in the early 1800s, the Morgan Horse has been the foundation breed for four bloodlines or generations so far. The four main Morgan families are Lippit, Brunk, Western Working, and Government.

The Lippitt family originated from the Robert Lippitt preservation breeding program, which involved breeding equines belonging to the Ethan Allen II family. The Lippitt bloodline has no outcrosses; its descendants directly connect to Figure, making it the purest of the Morgan Horse families.

The Brunk bloodline can be traced back to a breeder known as Joseph Brunk. The equines in this line are known for their athletic disposition, intelligence, and cool temperament.

The largest of the bloodlines is the Government line, and the sire for this line was known as General Gates. The Morgan descendants were first bred by the US Morgan Horse Farm and were quite popular in the 1900s.

The Morgan Horse has a special place not just in the history of the state of Massachusetts but in the country’s equine industry. As the earliest American horse breed, it was the foundational breed for many beloved horses that we enjoy riding and working with today. If you have an equine pal, the chances are good that he is a descendant of Figure aka the Morgan Horse.