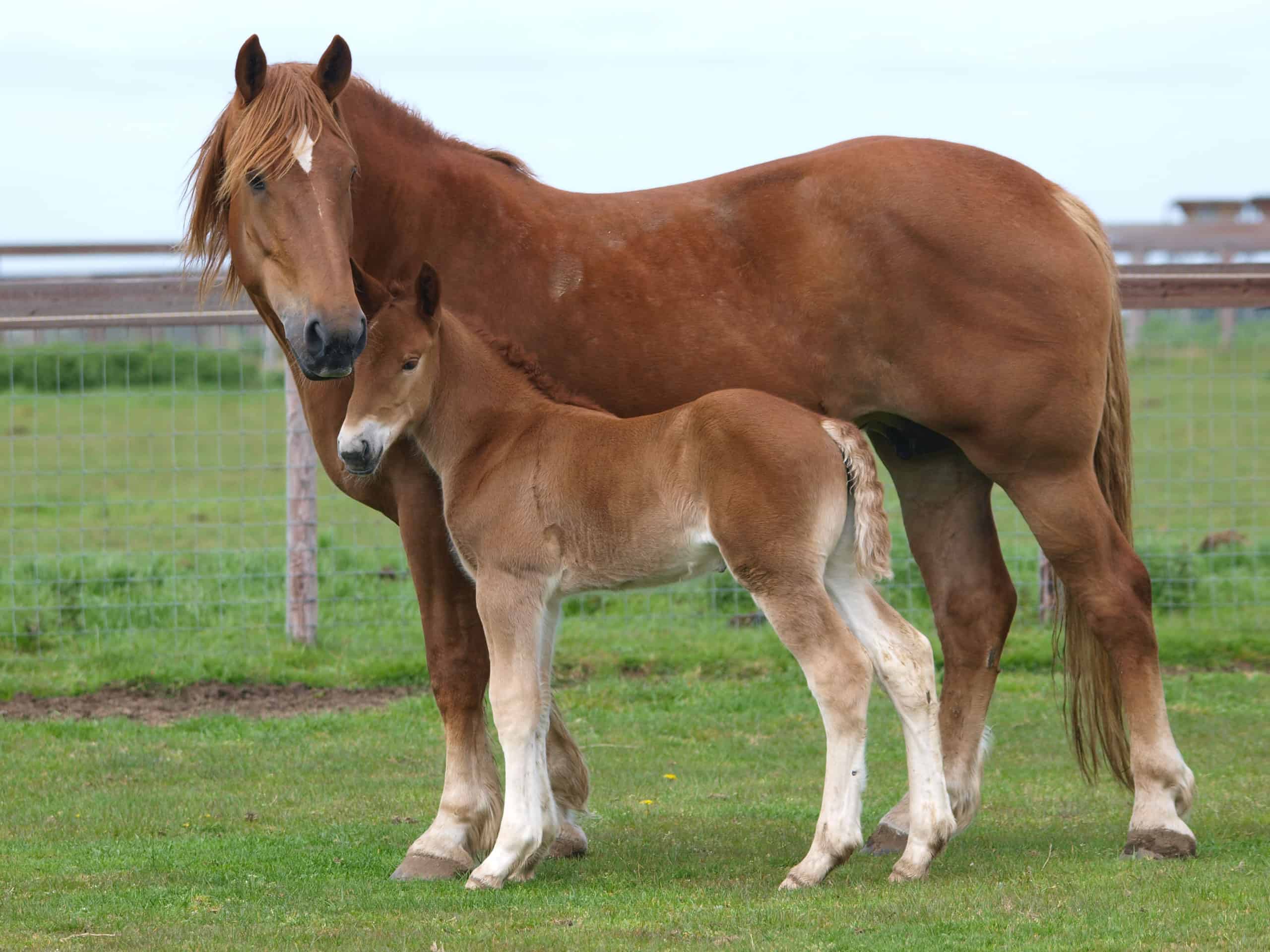 Every baby animal has a name, and for most animals, there are only two names to differentiate their younger and older age. But horses are different, as they are given different names when they are younger and throughout the various stages of their development. And this may get many people wondering, “What is a baby horse called?”

Stick with us as we answer this question and dig a little bit more into baby horses so you can understand these beautiful creatures better and communicate with other equestrians more effectively.

What to Call a Baby Horse

As the young equines continue to grow and their gender becomes obvious, you can start referring them by their gender-specific names.

When is a Baby Horse Weaned?

Weaning is gradually introducing your baby horse to the adult equine diet while withdrawing its mother’s milk. When to do this is debatable. Some people do it after the second month, others after the fourth month, and some wait until the foal is nine months old.

So, when exactly is the best time to wean a baby horse, you may ask? You can wean your baby horse safely after the third month. By this time, the horse is likely eating enough grass to keep a healthy diet.

With this extra nutrition, the youngling no longer necessarily needs to suckle to stay healthy. Weaning the foal will allow the mother to gain back her strength.

Some experts, however, have argued that weaning baby horses at the age of three months puts them at a higher risk of developing behavior problems and makes them susceptible to orthopedic diseases.

Talk to a veterinarian to know the best time to wean your baby horse. A vet will examine the foal to identify the health conditions that are likely to pop up if weaned early. They may also suggest ideal weaning procedures like letting the foal interact with other horses to reduce the stress of being separated from the mother.

Can You Ride A Baby Horse?

Absolutely not! Horses need to be at least four years old before being ridden. Prior to this time, their bones are not fully developed, and riding them will only put them at risk of injuries.

Before putting a heavy weight on your horse, you need to make sure its body is able to support that weight. Have the vet check the growth plates in the horse’s knees to see if it can bear the weight of a rider or any heavy weight placed on its back.

Most horses will be ready to ride at the age of four, some may take longer. How long your horse takes to fully develop physically and become ridable depends on many factors, the most common being its breed.

Let’s take Quarter Horses, for instance. These horses are often fully developed for riding as yearlings and will be ready to start heavy training as early as two years of age. Thoroughbreds will also be ready to train at the same age.

Larger horse breeds like the Shire and Clydesdale, on the other hand, aren’t fully developed to ride until four years old. Some will take up to five years.

Poor health is also another element that can delay the growth and development of your horse. If your equine has been sickly for the most part of its life, chances are it will take a little longer to develop fully, which means you will likely have to wait a few more years to ride or train.

Can You Breed Young Horses?

Assuming your filly is healthy and in tip-top condition, you can breed her even when she is two years old. Some people will breed their horses at two years while others will wait until when the horse is about three years.

Mares will continue producing foals well into their early twenties. The ability to reproduce, however, reduces each year as the horse gets older.

Also, an older mare that has recently reproduced has a higher chance of getting pregnant again than one of the same age that has remained barren over the last breeding seasons.

In addition, not letting your mare to mate until when she is older doesn’t necessarily mean she will be overly fertile when she eventually mates. It is not always easy for older mares to get pregnant.

What Is the Mother of a Horse Called?

Contrary to what many people think, the foal’s mother is not called a mare. She is called a dam. A mare is any female equine that is more than two years old. If a mare is used sorely for reproduction, her name changes to broodmare.

Mares can produce many foals over their lifetime. The healthy ones can produce up to sixteen babies. Having sixteen babies, however, will require the horse to start breeding when she is four years old and stay fertile until at least the age of twenty.

It is not possible for horses to produce more than sixteen babies within this period, and this is because the gestation period of horses is eleven months, which means the animal can have only one baby per year.

There are times, however, when the mare is able to produce more babies over her lifetime. For instance, she could have twins in some years or she could stay fertile until her mid-twenties. But both of these situations are very rare.

Why Are My Mare’s Udders So Full?

Full udders are the first sign that your horse is about to give birth. Throughout the pregnancy period, the udders of your mare will occasionally fill but go back to their average size after some time.

If it is the last month of pregnancy and the udders are staying full the entire day, then you should know the baby is almost coming, so don’t leave your mare’s sight.

If you are keen, you will also see the stomach starting to shrink as the baby gets into position to leave the mother’s womb. You may see the muscles around the hips and buttocks relax and contract too.

After the baby is born, your mare may start leaking colostrum from her nipples. Colostrum is the form of milk the horse produces immediately after giving birth.

Help the baby horse to the teats so it can suckle. Don’t let the dam lose a huge amount of colostrum. This foremilk is full of the vitamins, antibodies, and nutrients the foal needs to grow and stay healthy.

If you notice the horse is losing plenty of colostrum, try collecting storing it in a freezer for later use. Keep an eye on your mare to see if the leaking stops after some time. If it doesn’t, talk to the vet.

What is Gelding When are Male Baby Horses Gelded?

Gelding is the process of castrating male horses to give them a more even temperament and make them easier to handle. After this process, the horse is called a gelding.

If a male horse is not gelded, it remains a stallion and may retain the aggressive stallion-like demeanor. Unless you want to use your horse for breeding purposes in the future, male equines should always be castrated.

Ideally, this should be done before the horse hits the one-year mark. The earlier you geld your colt, the less likely it will be for the horse to develop stallion-like behaviors.

Testicles produce testosterone, the hormone responsible for triggering stallion-like physical attributes. This hormone has also been found to sometimes cause dominant and aggressive behavior that could endanger other horses and anyone handling the horse.

Geldings are generally easier to train. They can concentrate on the exercise at hand without hormones running through their bloodstream, which leads to more successful races. They are the safest horses for beginner riders.

Apart from ending up with a quieter and well-rounded male horse, gelding also helps avoid unwanted offsprings, thanks to geldings’ little interest in mares.

There are several problems that can be identified in a foal during its early years of development. Here are the most common:

Newborn horses should nurse every one to two hours. If a foal is not suckling as often as it should or not suckling at all, that can be a problem.

Consumption of nutrients is very important to any youngling, as it ensures the baby grows healthy. If a foal seems not interested in nursing, a plan must be devised to give it the necessary nutrition.

Sometimes the foal may nurse properly but still not absorb the required nutrients. One of the major reasons this happens is low-quality colostrum.

Have a veterinarian measure the Immunoglobulin Gene (IgG) levels of the foal’s serum. Levels lower than 400 mg/dl are considered dangerous and should be treated. You can prevent this problem by vaccinating the mare a month before giving birth.

Abdominal pains can be a sign that the baby horse has a digestive disorder. It could also indicate a ruptured bladder. Talk to a vet about it.

Having trouble passing stool can be a sign of constipation. This can be as a result of impaction or due to serious problems requiring a vet’s intervention like colic.

Some foals are born with limb abnormalities that may prevent them from living their life as they should. Some of these include flexural contractures and flexural tendons and should be addressed as soon as possible to enable the foal’s limbs to grow strong and healthy.

If you notice deformities in your baby horse’s limbs, contact a vet experienced in foals’ orthopedic problems.

How to Care for a Baby Horse

A baby horse should start breathing on its own a few seconds after birth. If your foal doesn’t breathe right away, rub its nostrils with a towel or a bit of hay to get them to open.

Most foals will stand up and start suckling within two hours of entering this world. If yours is having trouble locating the mother’s teat, help them find it.

A baby horse will try to stand up within fifteen minutes of being born. Don’t help it stand even if it appears to be struggling or you will permanently damage it. Instead, place extra bedding around it to make sure the ground is not slippery.

Having a veterinarian examine your foal as soon as it is born can help you identify birth deformities you may not be able to on your own. Be sure to keep track of significant milestones within the first three hours, as the vet may ask about these.

Are you raising a baby horse? What are some of the things you are doing to keep it healthy? Let us know in the comments.