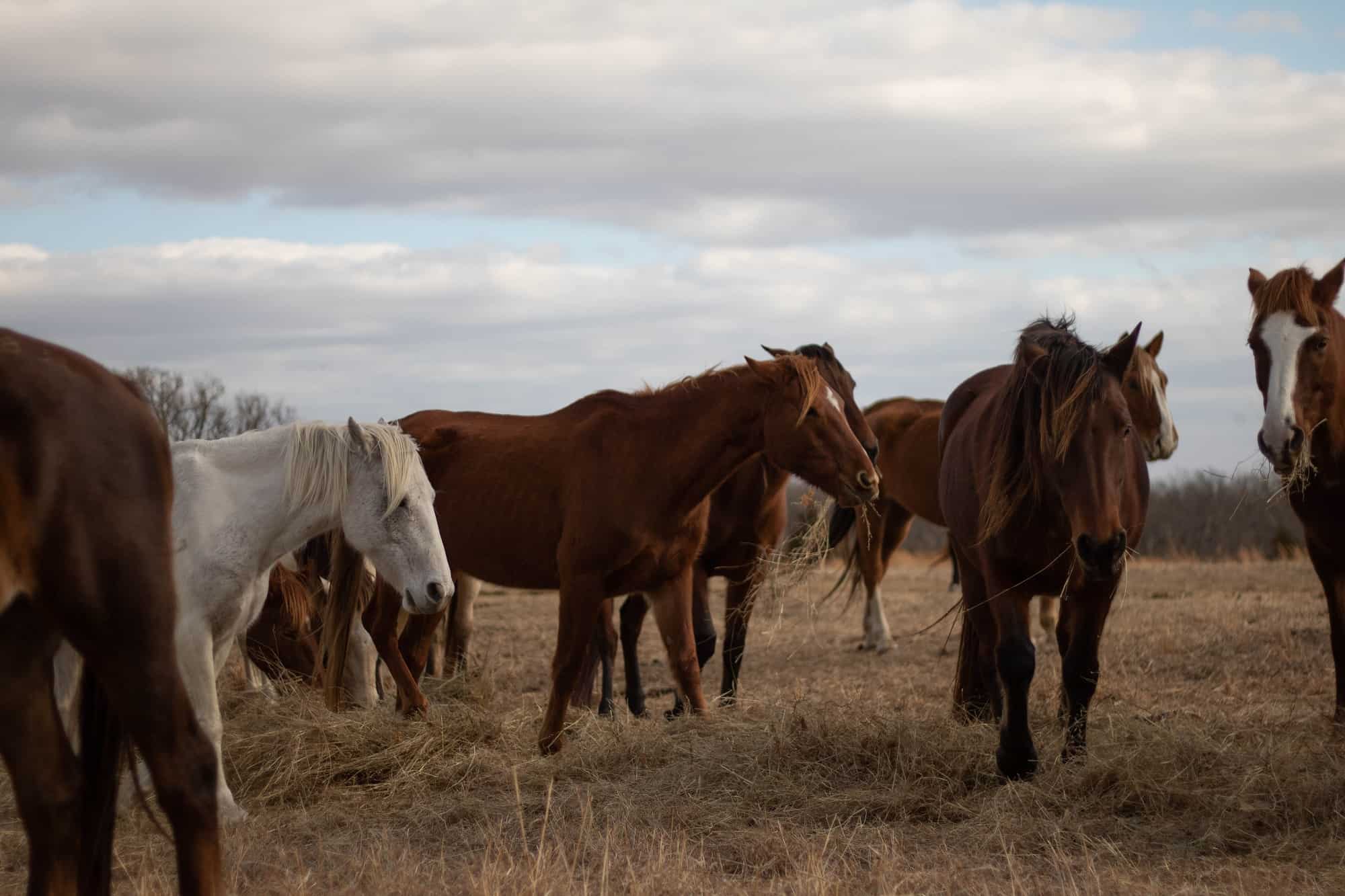 If you love reading about horses or hanging out with riders, you have probably seen or heard a horse being referred to as a ‘mustang’ and wondered, “What is a mustang horse?”

Mustangs are wild horses found in the Western United States. They are very hardy and surefooted, and because of these unique characteristics, they can easily navigate landscapes that other breeds may struggle with.  Mustangs, therefore, make phenomenon trail riding partners.

Here is everything you need to know about mustang horses.

The Origin and History of Mustang Horses 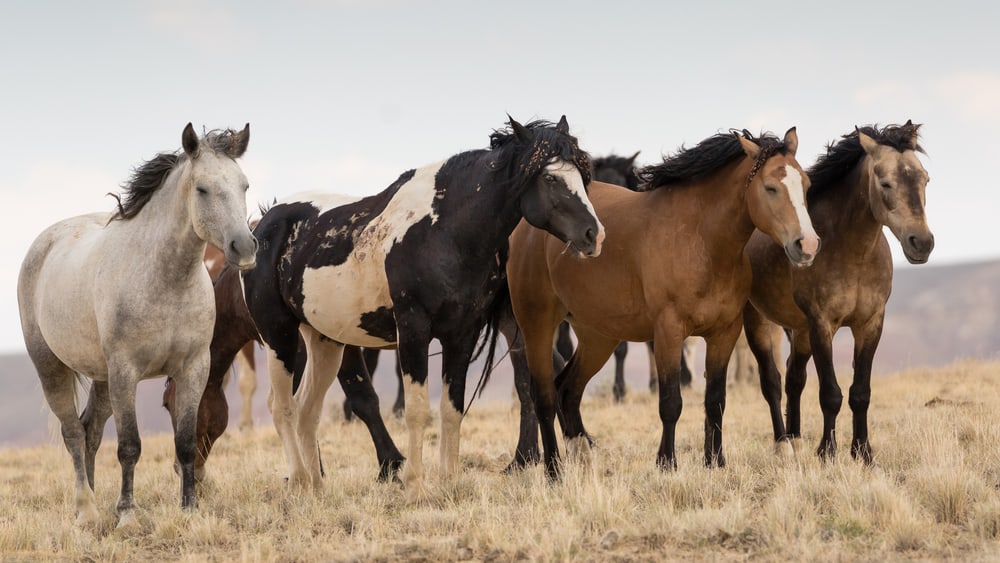 Mustangs originated from Spanish horses and were brought to the United States by European settlers. The word mustang is actually derived from ‘mesteno’, a Spanish word meaning wild or stray.

Over time, some of the mustangs escaped and others were sold or domesticated by the Native Americans. Those who escaped formed herds and lived in the wild, and as the country continued to develop, the horses were gradually pushed west.

Without controlled breeding, the mustang population in the wild started to grow considerably. But the number of settlers was also increasing, with the majority being ranchers who were constantly looking for land to graze cattle and other domestic animals.

The increasing population of mustangs, therefore, started becoming a problem. The arid lands could not support such a high number of grazing animals and a policy was established to start shooting mustangs.

In the early 1900s, the number of mustangs in the United States was close to 2 million. By 1930, this number had been halved. Today, only around 30, 000 mustangs are in existence.

In 1971, a law was passed to protect mustangs from being killed, hunted, and harassed, but this also resulted in the population growing again.

The Bureau of Land Management (BLM) had to come up with a quick solution to the exceedingly growing number of mustangs. Through their Adoption Incentive Program, which was then called Adopt A Horse program, they were able to round up and distribute excess mustangs to willing ranchers who gave them a good home.

While the population of wild horses is still growing, this program has helped keep the numbers in control, while preventing overgrazing in public rangelands.

The mustang, like most breeds, come in different coat colors and patterns. The most prominent solid colors include black, bay, gray, brown, chestnut, and palomino. Some mustangs have patterns on their coats, the most common being overo, appaloosa, and pinto. There are some with spotted patterns too.

Mustangs closely resemble small warm-blooded horses and are usually 13 hands to 15 hands tall. They have a muscular body, with a well-defined, narrow chest. Their backs are short, with rounded hindquarters.

The mustang has a well-shaped head, with sharp, wide-spaced eyes. The majority have brown eyes, with the eyes of those that have bald face markings appearing bluish. Some of the original Spanish mustangs have either gray or green eyes that appear slanted or almond-shaped.

Mustangs are known to have sturdy legs and thick-walled, round hooves that have developed through years of navigating the harsh, rocky terrain of the Western United States. In the winter, some mustangs develop light hairs or feathers on their legs but come summer, this hair usually falls off.

Is Mustang a Friendly Horse?

Mustangs are naturally bad boys. Those taken directly from the wild and haven’t been handled or gentled to ‘break the old habits’, especially, will take a long time to learn how to live with humans and develop trust.

The mustang is, therefore, not for the faint-hearted and is definitely not the best option for first-time riders or adopters. Even after days of being domesticated, the horse will still feel unsafe and will spook easily. The only way to prevent this is to take the animal through a proper training program.

After training, a mustang can become calm, friendly, and well-mannered and will begin to trust humans. Watch this video to have an idea of just how jumpy and restless an untrained mustang can be.

Like most horse breeds, the primary diet of mustangs is pasture. In the absence of grass, a mustang will feed on anything green they find in nature including berries, tree leaves, and twigs.

Because they are naturally adapted to live in arid areas, these horses can live on limited amounts of food and water for a long period of time.

Where there is enough grass or leafy bushes, however, an adult mustang will eat between four and seven pounds of forage per day.

Despite the scarcity of food that comes from living in the wild, mustangs generally tend to be healthier than most of the domesticated horses we have today because they have access to different diets.

Horses in the wild have a wide variety of grasses, leaves, berries, flowers, fruits, and seeds that provide the nutrients and minerals their bodies need.

Domesticated mustangs, on the other hand, typically feed only off hay that usually doesn’t contain as many nutrients as what they previously ate in the wild. This is why it’s important for horse owners to add supplements and alfalfa to the horses’ diet.

How Fast Can a Mustang Run? 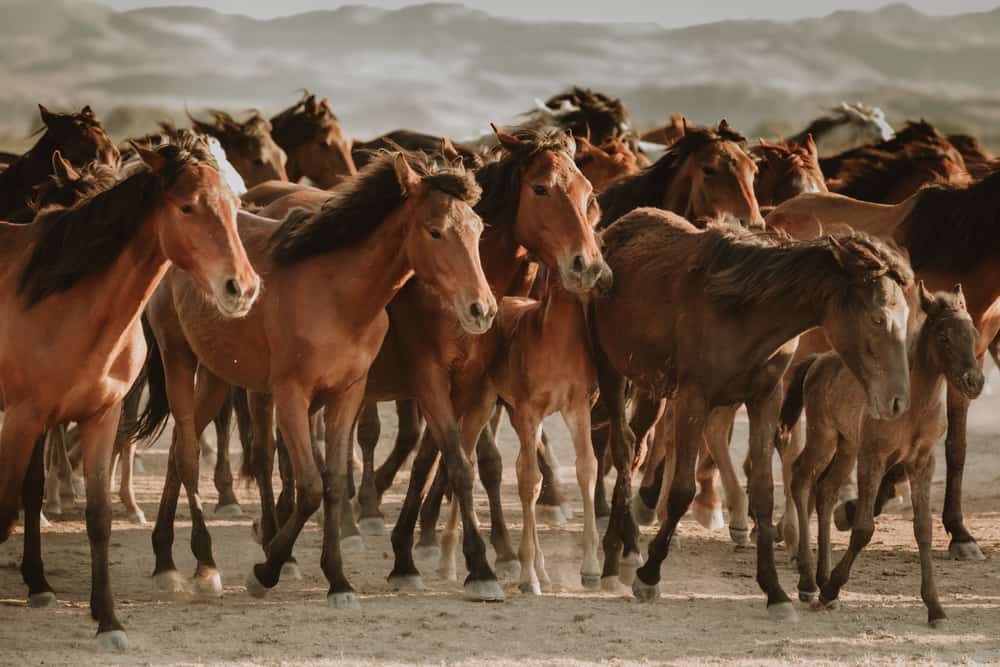 On average, a healthy mustang can race between 25 and 30 miles per hour. The fastest mustang is recorded to have run 55 miles per hour over a short sprint distance.

The fastest horses are quarter horses and thoroughbreds, and these are the breeds that rule the horse racing industry. Arabian horses are excellent in endurance riding and usually grace many long-distance racing competitions.

There are three different types of mustangs in the United States, each with distinct characteristics. They include:

Should You Get a Mustang?

Mustangs are an amazing horse breed to have in your stable. For starters, they make outstanding trail horses. Before being domesticated, their daily life was trail running. As such, they know where to put their feet and won’t easily get hurt.

A mustang will safely carry you over landscapes that other domesticated breeds will consider too dangerous to navigate, and will do so with too much confidence and eagerness to find out what is around the next bend or bluff.

Plus they have a heightened ability to make sense of sounds, sights, scents, and movements, which is an excellent trait for keeping the animal out of danger.

Another advantage of owning a mustang is that these horses bond very deeply with their owners, just like they bonded with others equines in their herd back in the wild. Once they have connected with you and started trusting you, the relation usually goes very deep.

How to Buy or Adopt a Mustang

Mustangs are among the most affordable horse breeds and are found all over the United States. You can always buy a mustang from private sellers, and one of the biggest advantages of doing this is that the horses will probably have already been trained to ride.

Another way to obtain a mustang is through adoption. BLM gives out mustangs for adoption every year to help lower the numbers in the public grazing lands and prevent overgrazing.

If this is an option you would like to consider, the first thing you need to do is review the BLM’s adoption policy. There are certain requirements that one needs to meet to be approved to adopt such as the type of facility and fencing, and sometimes even the type of trailer you will use to transport the horse.

It is also important to note that unlike buying from a private seller, adopted mustangs will not have been gentled, thus, they will need to be trained before they can become any useful.

Whichever approach you choose to obtain your mustang, make sure to have the horse examined before you make any commitment so you can find out if there are any underlying health issues that may affect their performance.

Mustangs are generally like any other horse breeds we have in our homes. The only difference is that they have spent the best part of their lives in the wild, which makes them a little bit tougher than their domesticated cousins.

While they can take a longer time to handle and gentle, once trained, they become great human companions and are the best horses to ride on a trail.