When you think about strong animals, the horse is probably the first animal that comes to mind, but have you ever asked yourself, “Just how strong is a horse?”

Horses are generally strong enough to carry more than 300 pounds on their back, pull a load three times their weight, and bite with a force as heavy as 500 pounds per square inch. In fact, horses are so strong that today, many industries use the term ‘horsepower’ to describe the output power of various machinery.

Let’s dig a little deeper into the strength of these amazing animals.

Horses Are a Symbol of Pure Power 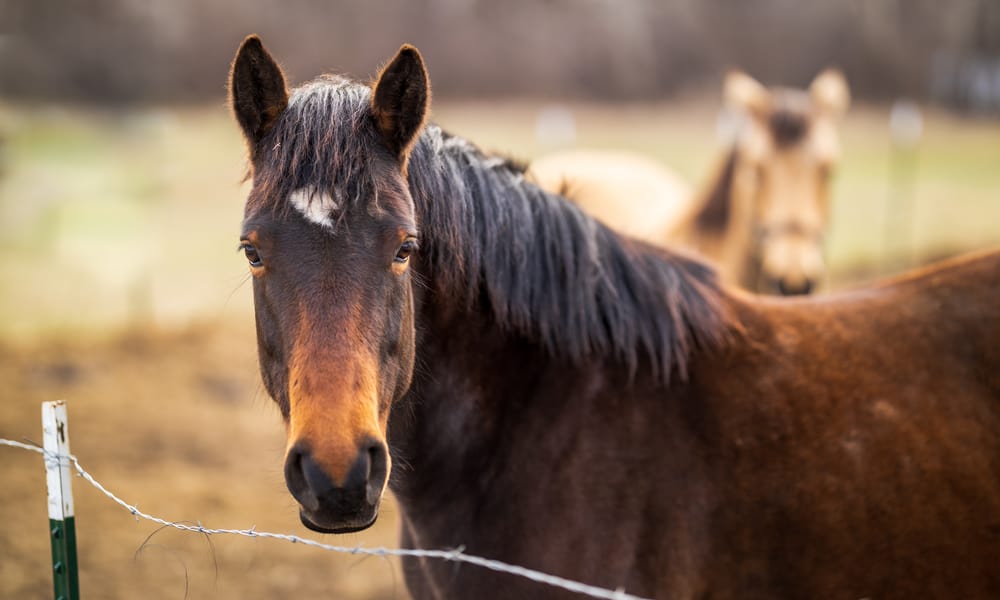 Horses are pretty sturdy animals who are built strong enough not only to carry heavy loads on their back but also to pull massive deadweight.

Over the years, equines have evolved to develop thick muscles, robust lungs, and a larger heart that have enabled them to run fast and efficiently perform strenuous work like plowing.

To make horses even stronger for specific jobs, people have bred groups that are particularly known to be the sturdiest or hardest working. These new breeds have been used to haul heavy machinery, pull plows in farming fields, and undertake other similar tasks.

The Strength of a Horse Explained

Horse strength can be broken down into the following:

1. The Amount of Load the Horse Carries 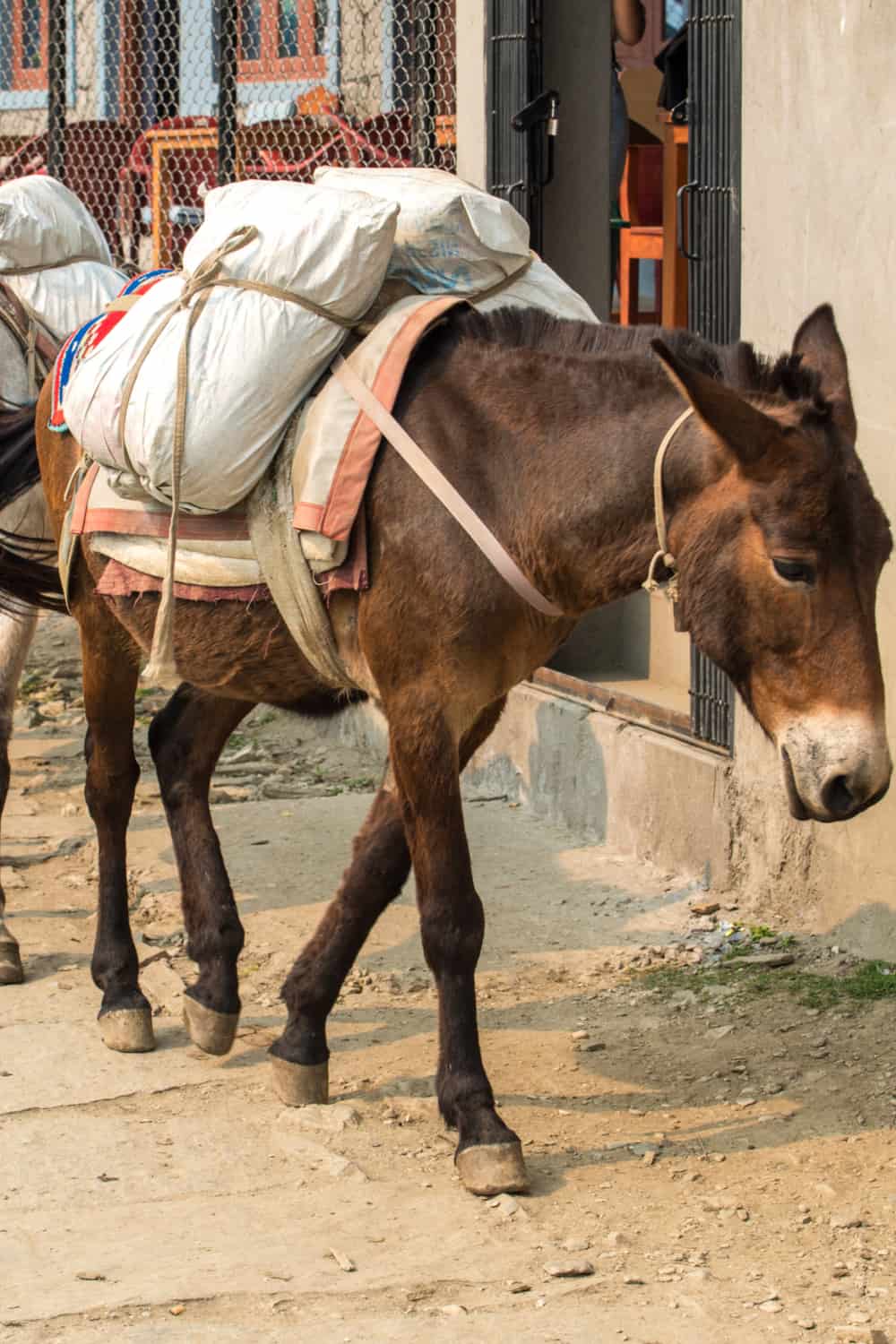 On average, horses can carry between 350 and 400 pounds on their back. But the amount of weight transported on a horse’s back will solely depend on the breed, shape, weight, and activity level of the horse.

If your horse is healthy, they can safely transport 20% of their body weight. For instance, a large draft horse that weighs around 1, 800 pounds can theoretically carry a person weighing around 360 pounds on their back.

However, if your horse is smaller, has an underlying health condition, or hasn’t been exercising much, having the horse carry a load heavier than their body weight can cause the animal to develop short-and long-term conditions like arthritis, pinching of nerves, or deteriorated muscle function.

If you are using your horse for carrying heavy equipment, it’s important that you examine them regularly so you can keep track of their weight, fitness level, and any other variables that may affect the amount of load they can transport. That way, you won’t be forcing the animal to work more than they should.

2. The Amount of Weight the Horse Pulls 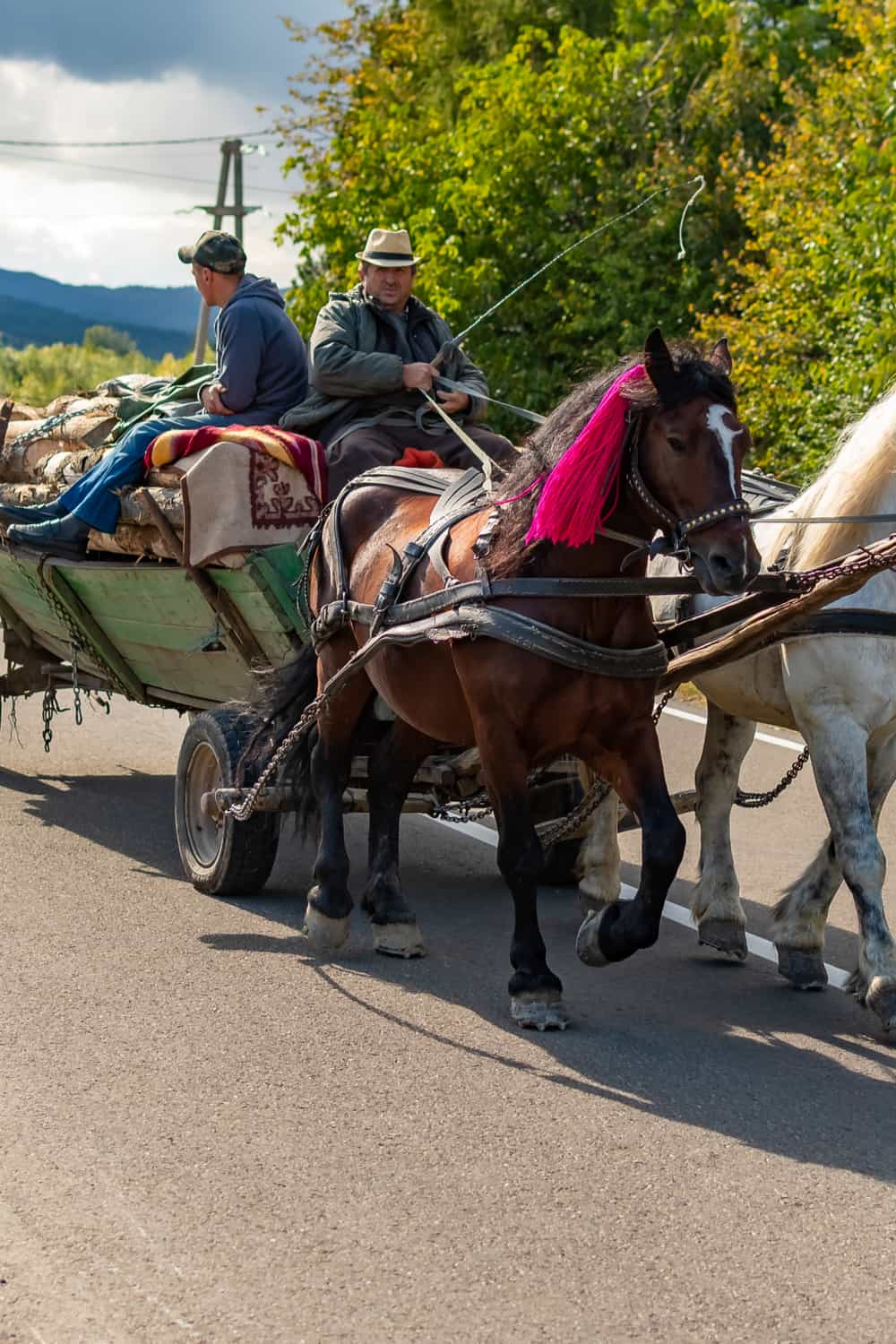 A horse can comfortably pull 1/10 its weight in deadweight, working eight hours a day. Deadweight is simply unwheeled load like a plow.

If the horse is pulling a load placed on wheels, say, on a cart or wagon, it can pull up to 1 ½ times its body weight over a long distance.

Let’s take an example of our 1, 800-pound draft horse. If it is hauling deadweight, the animal will only be able to pull 180 pounds, but if you give them a cart, they will be able to haul up to 2, 700 pounds.

Of course, there are some factors that can come into play when it comes to the amount of weight a horse can haul such as the surface they are moving the load on. If the animal is walking on rough terrain, it will not be easy for them to pull a heavy load, even if it is placed on a cart.

3. How Strong the Horse Bites 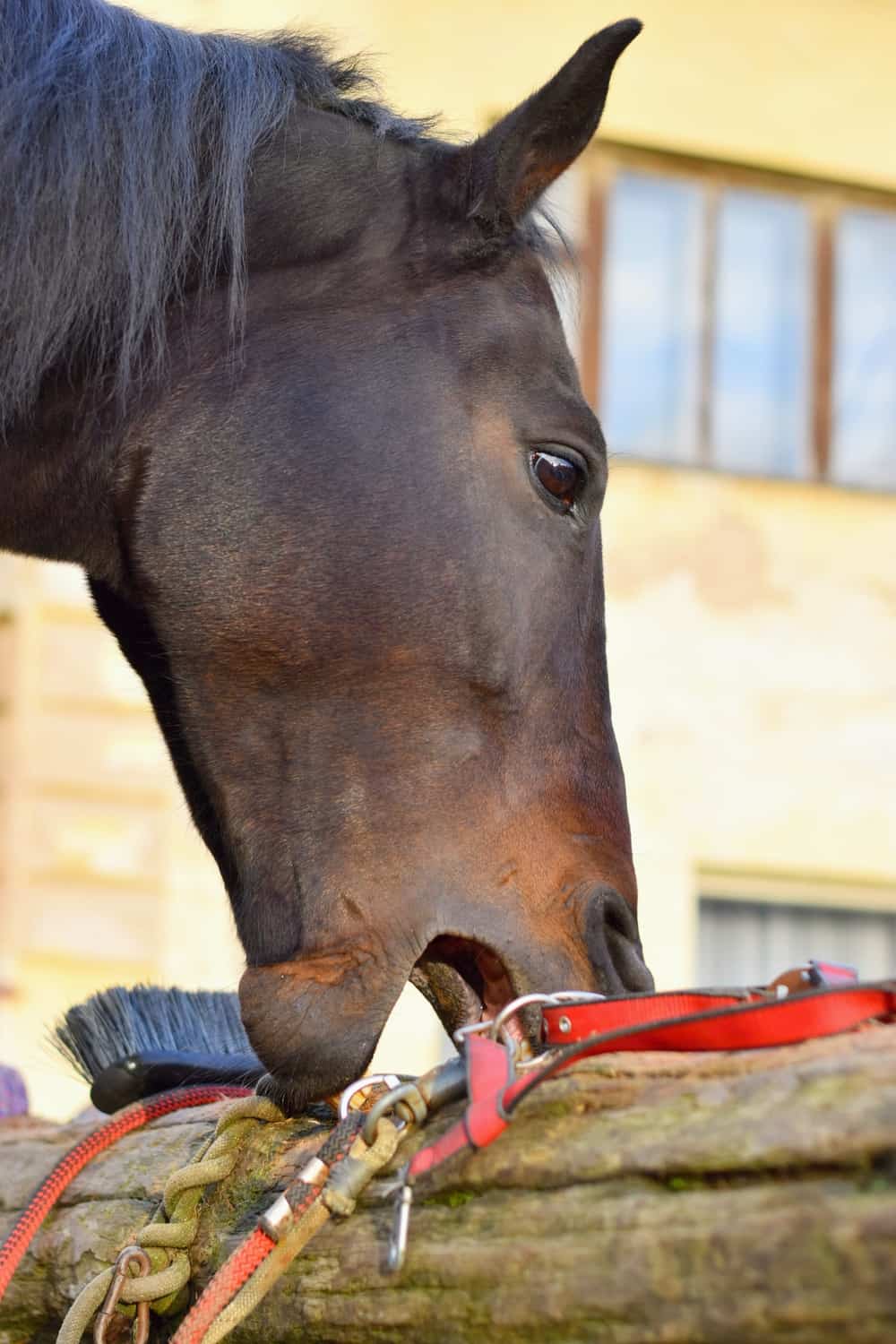 Even though horses are generally harmless and their jaws and teeth are not made to damage what they bite, they have an outstanding bite force. The force of a horse bite can be up to 500 pounds per square inch (psi).

Human biting force is about 200 psi, which means, horses can bite at a force 2 ½ times that. If your equine does not chop your finger off, it does not mean they have weak jaws. It means that your horse did not want to bite you in the first place so they did not put excess force on the bite.

4. How Hard the Horse Kicks 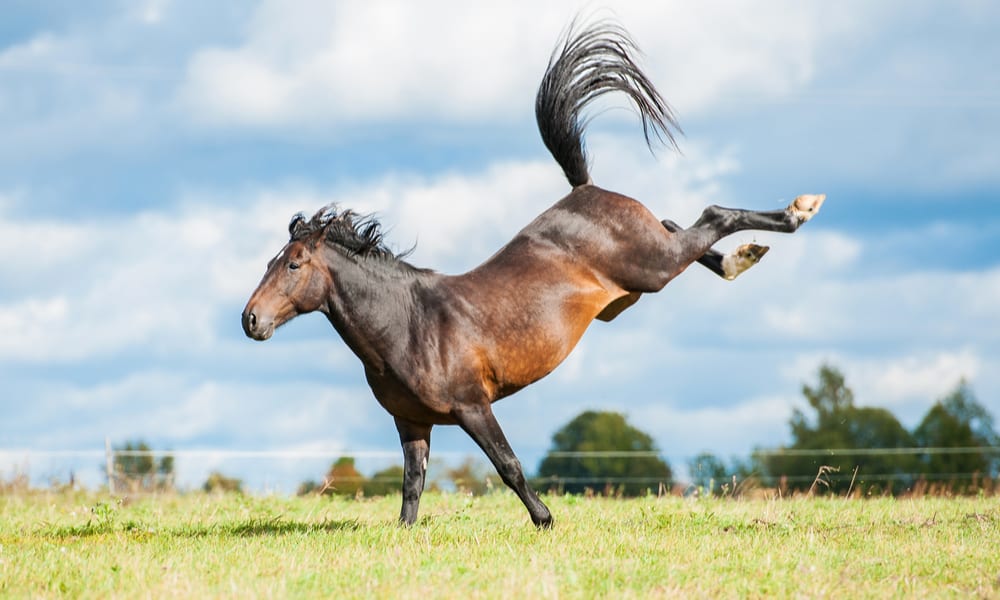 Horses can kick hard enough to kill. Their kicking force is estimated to be 2, 000 psi, with an average speed of 200 miles per hour. That is technically more than how hard any skilled boxer could ever punch.

That said, most trained horses will prefer not to kick unless they are really pushed to the edge. If you are observant, you will know when your horse is about to kick out and stay out of the way.

A lot of equestrians know just how badly a proper horse kick can hurt. While most of these kicks are accidental, some of them require treatment. Just imagine the sort of injuries you would sustain if you were hit by a vehicle traveling at 20 miles per hour.

Some kicks can be extremely dangerous and even result in death. It is estimated that 25 people die every year in horse-related accidents. Sure, the number is very low compared to that caused by road and transport accidents, but that does not mean you should not worry about horse kicks.

This video is a compilation of some of the most dangerous horse kicks recorded in the equestrian world and paints a pretty clear picture of just how hard a horse can kick.

Because of how horse bodies are built and shaped, they are more powerful than human bodies, which is why horses are able to perform much heavier tasks than humans.

However, when it comes to activities like running long distances, there are some humans who can outrun an equine. And this is generally because of how we cool ourselves compared to how horse bodies cool down.

A human body can remain cool at different distances and speeds, while the average horse will overheat at the same speeds and distances. Because of this, some people will argue that horses do not have as much endurance as humans.

Realistically, equines are much more stronger than humans. Over the years, they have been interbred with robust breeds that have given them thick, muscular bodies. Now they are stronger not only than humans but also than some of the animals domesticated today to perform strenuous work such as donkeys.

Which Are the Strongest Horse Breeds?

While all horses are built strong, there are some breeds that have proven to be more robust than others. Examples are: 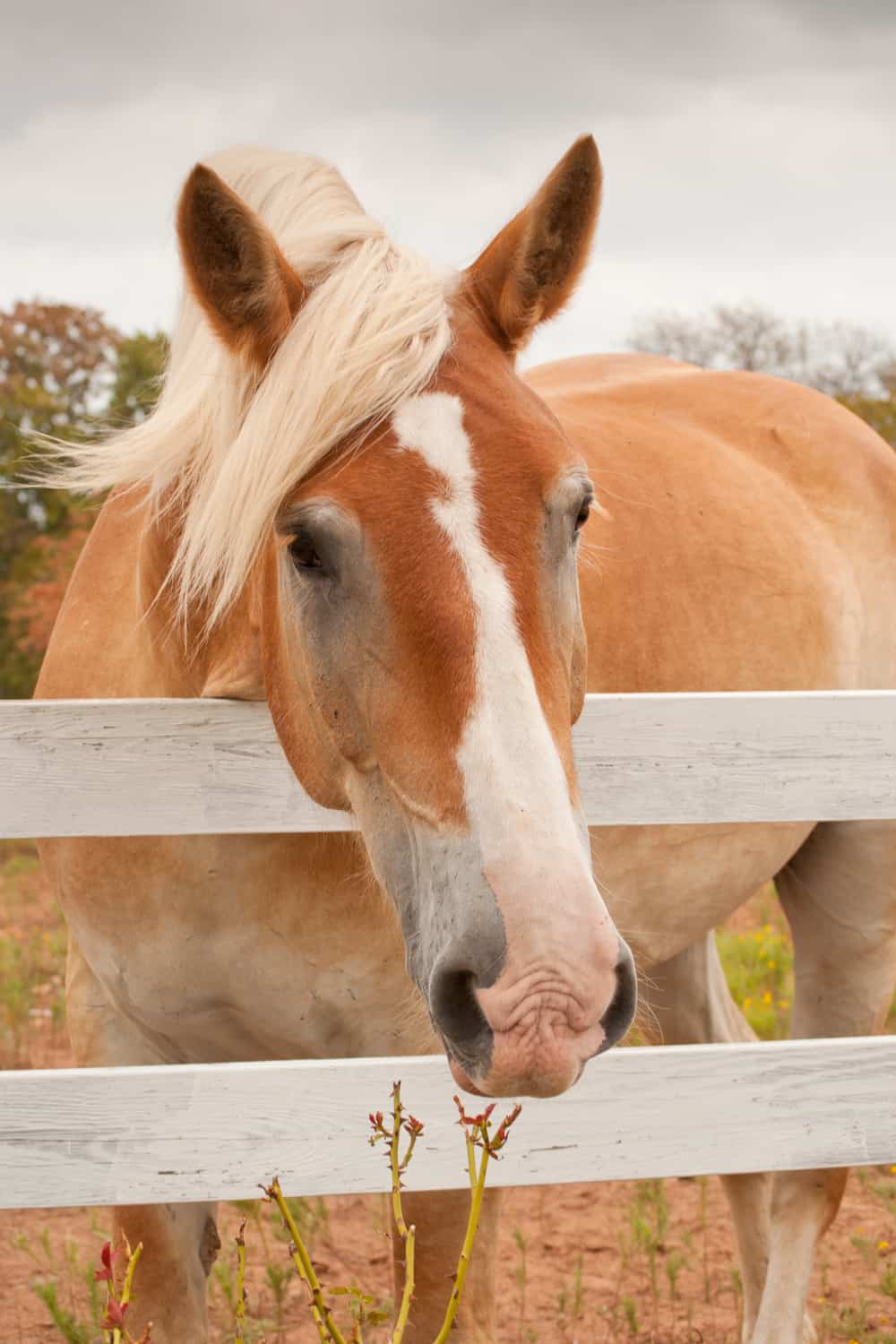 Weighing about 2, 000 pounds, the Belgian draft holds the title for being the strongest equine in the world. Standing between 16 hands and 17 hands, this gentle giant is kind, easy to handle, and always willing to work.

Its huge body and short legs make it possible for it to haul massive amounts of weight over a long distance. A Belgian draft is so strong that it can haul up to 8, 000 pounds. 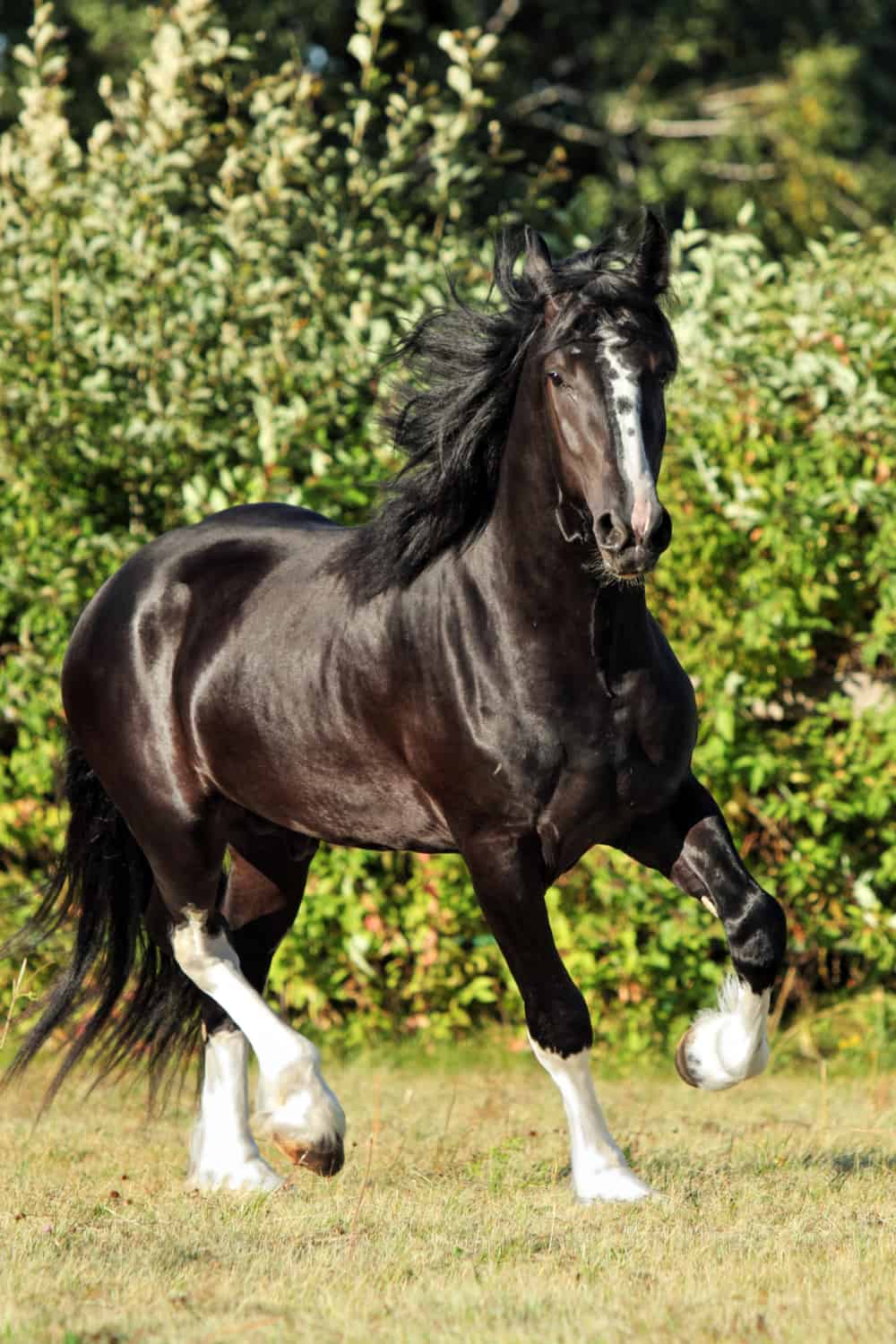 The Shire is an enormous horse, usually standing 16 hands to 17 hands tall. It is noble, adaptable, and like the Belgian draft, it is always eager to work and learn.

These horses are believed to be the descendants of The Great Horse, one of the breeds that were commonly used by the knights on battlefields.

Adult shires weigh around 2, 000 pounds and rank among the strongest horses we have today. You will see them in events, dressage, shows, and in many other horse activities. 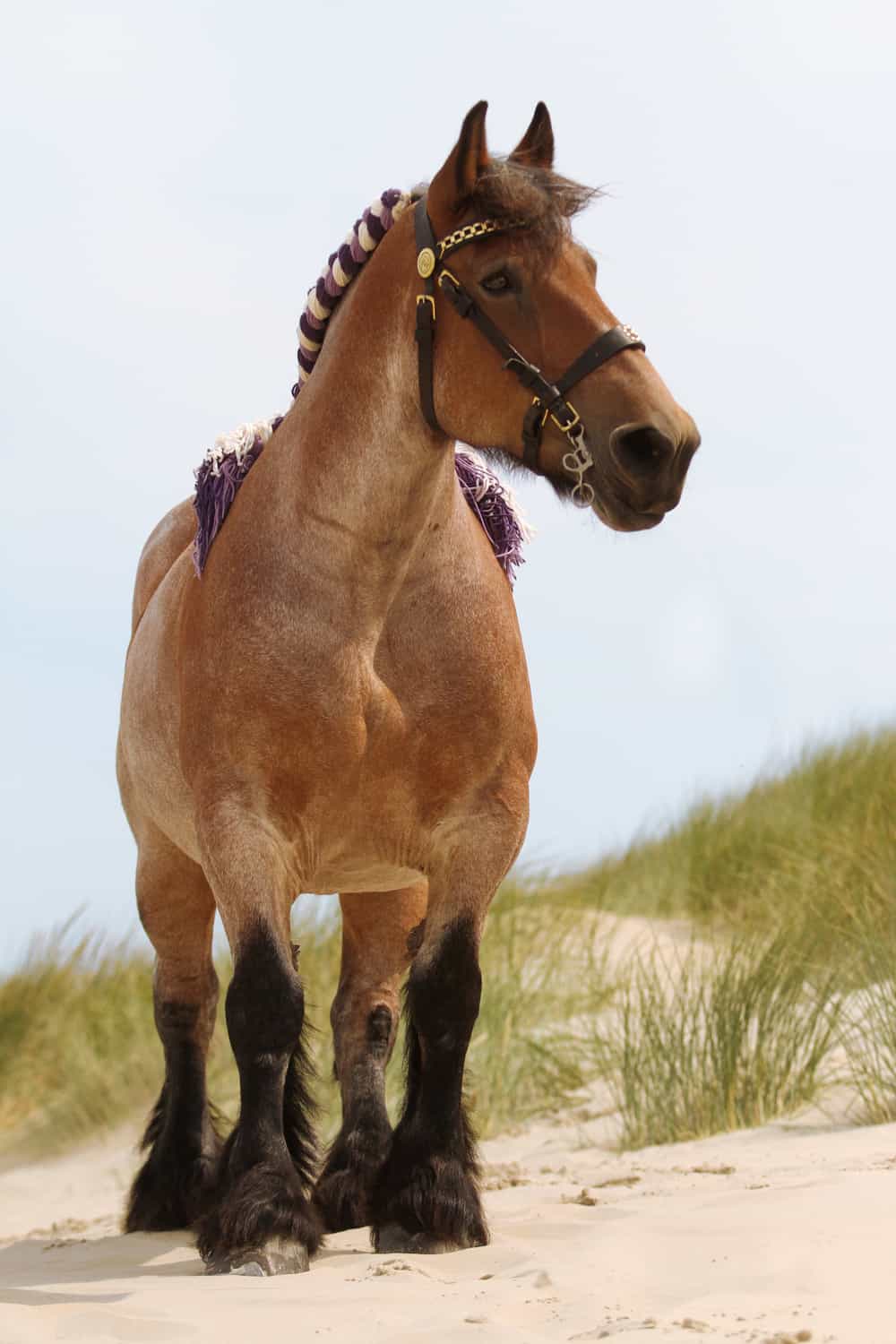 Standing 16 hands tall and weighing 1, 700 pounds, the Dutch draft is yet another breed of horse reputed for its strength and stamina.

Of all the Dutch breeds, this one is the heaviest and can pull and carry heavy loads no matter the terrain. Equestrians love Dutch drafts because they are docile, friendly, and have a calm temperament.

Even though they are mostly bred for pulling plows, Dutch drafts also dominate the world of recreational riding and you will sometimes find them in the dressage ring. 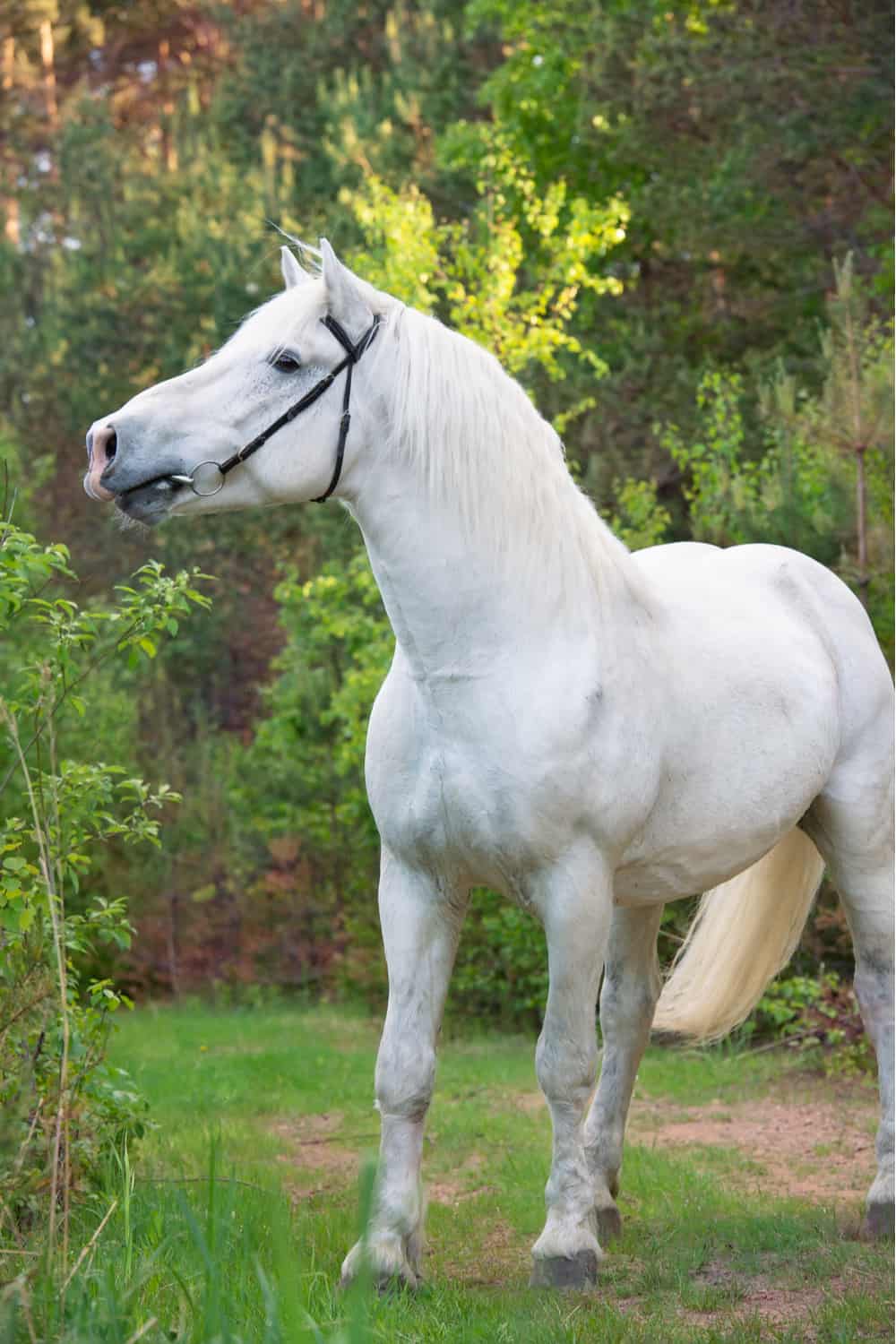 Percherons, like the Dutch drafts, were famous among farmworkers, as they could haul plows all day without showing any signs of exhaustion. They are some of the heaviest breeds to exist, weighing between 1, 900 and 2, 100 pounds.

Like the Shire and the Belgian, mature Percherons usually stand at 16 hands to 17 hands and made great warhorses in the early days. They are excellent at pulling carriages and wagons, and thanks to their calm temperament and willingness to learn, they are perfect for parades, hayrides, and sleigh rides.

Horses are some of the strongest animals to ever live. Back in the old days, this strength not only made them an excellent means of transportation but also quite resourceful at farm work.

Through interbreeding, horses have become even more powerful today and some draft breeds can pull up to four times their weight.

However, how much strength a horse displays will depend on what breed they are, how much they weigh, and how healthy they are. Draft horses are usually heavier and, therefore, much stronger.

Which Breed Of Horse Originated In Czechoslovakia? 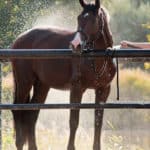 11 Easy Steps To Wash A Horse