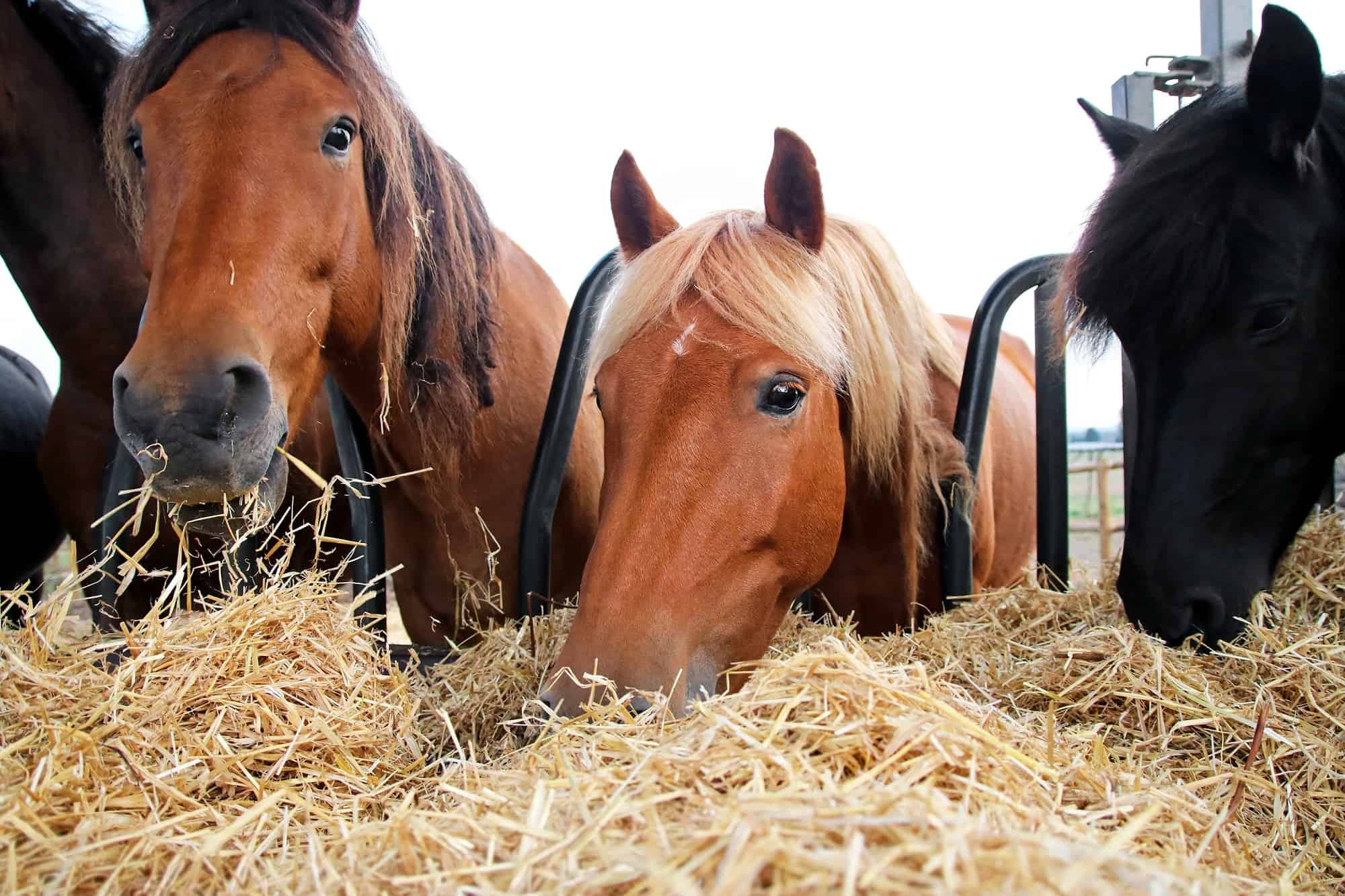 Hay is an essential part of your horse’s diet. It is highly nutritious, can be obtained easily, and horses love it.

If you are just getting started with horse keeping and trying to find out the total amount of money you will be spending on feeds, you may want to know, “How much does a bale of hay cost for horses?”

In this post, we give you a breakdown of the average cost of hay per ton and bale type and share tips to help you get the best value for your money. So, let’s get started!

How to Save Money While Buying Hay for Horses

If you are looking to get a better price for your bales of hay, purchase in bulk. Most retailers will give you a discount when you buy your hay in larger quantities.

You may also want to consider going directly to the farmers. Farmers will always offer the best deals especially if you are buying in bulk.

Check farmers’ forums like the Hay Exchange. Here, farmers advertise different types of hay and their prices, and some bale types will go as low as $5.52. Just select the name of your state and you will see all the different hay types available for sale, the quantity, and the price for each bale.

If you are buying hay for the first time, you may have trouble understanding the different forms in which hay is sold. Here is a peek at the various forms of hay in the market today: 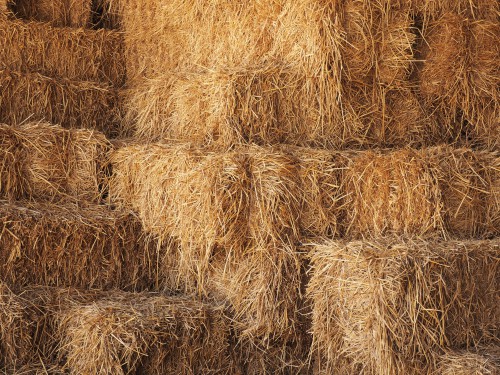 These are the most common forms of hay. They weigh between 40 and 80 pounds each and are relatively easy to move and stack on each other. Store indoors to prevent damage from weather. 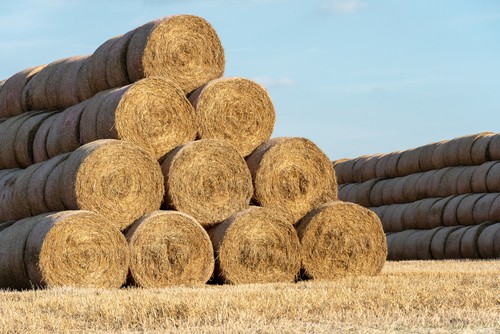 Round bales weigh around 1800 to 1200 pounds and are some of the most efficient to produce, as they have lesser labor requirements than their square counterparts. Due to their large size, these can only be moved using tractors.

They are much easier to move, though; you will only transport one large bale into the storage area instead of having to transport twenty small square bales. This is one of the reasons most hay producers prefer making large round bales to small square ones. 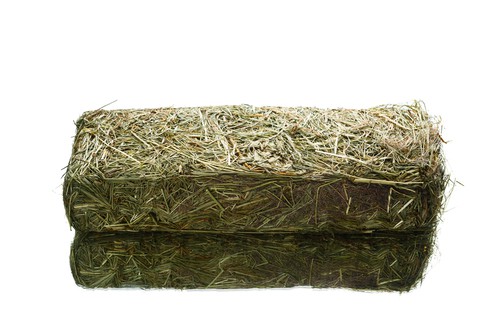 A hay cube is simply hay that has been chopped into tiny pieces and then compressed. Some cubes may have other ingredients added to them to boost their nutrient level. If that’s the case, this will be written on the label. Plus the hay itself is cut in such a way that you can see what else is in the cube.

This is hay that has been ground and processed with steam and heat to change the natural form of hay. But is it better for horses than the baled hay, you may ask? Well, not according to the experts.

Studies have found baled hay a much better option than its palleted cousin because the former forces the animal to drink more water, which helps with food movement through the gut. Baled hay is also cheaper compared to palleted or cubed hay.

Palleted hay is easier to eat and doesn’t require the horse to drink large amounts of water. While this may mean smaller poop piles, it could also lead to constipation, which could put the animal at risk of other digestive system disorders.

The Price of Hay Bales By Weight

The prices of baled hay vary from state to state based on the quality of hay and the type of bale. The following table shows the average price of a ton of hay in the United States.

Report released by the University of Wisconsin, Madison (May 2021) 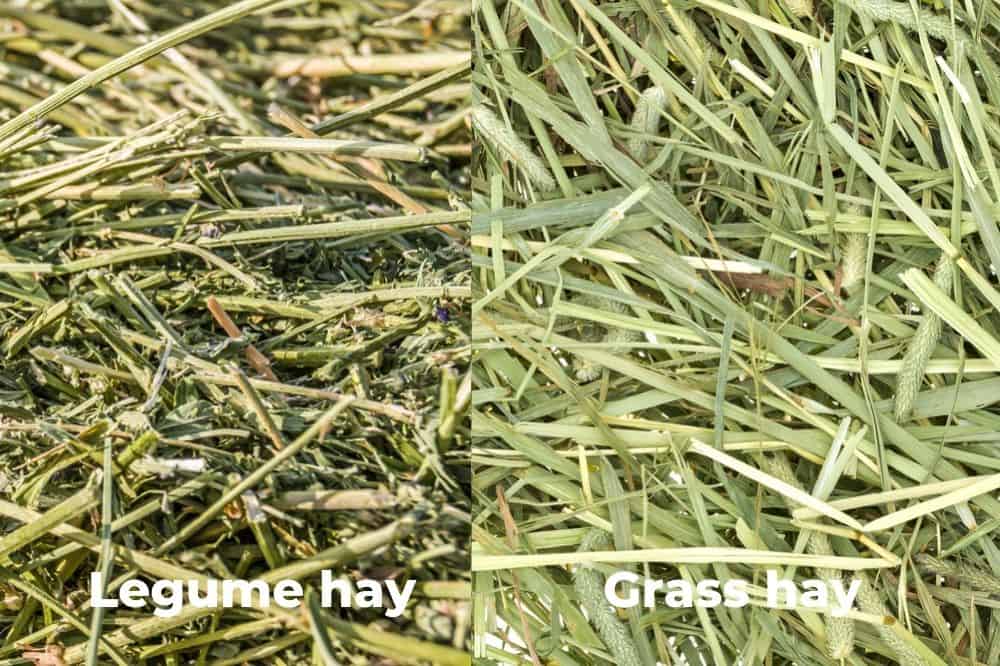 To identify the best hay to spend money on, it is important to first understand how hay is classified. In general, hay falls under two major categories namely, legume hay and grass hay.

Alfalfa hay is one of the most popular legume hays and the most common horse food in the US. It has more energy, fiber, protein, and calcium content than grass hays. In general, the amount of energy in alfalfa is 120% higher than that in oat hay.

Another excellent choice of food to give to your horse is the oat hay. Oat hay is a type of grass and whether to buy this or alfalfa will depend on the price per unit of protein or energy. Oat hay by itself contains plenty of protein and nutrients. It is often combined with alfalfa to increase the nutrient content.

One of the downsides of oat hay, however, is that it is high in sugar, which can make it a poor choice for insulin-resistant horses. Plus the stalks can be really thick, making it difficult for the horse to chew.

If you are worried about the coarse texture of oat hay, consider Timothy hay. This one is much finer than other grasses and most horses will chew it without much trouble.

The amount of protein is much higher than other grasses but other nutrients like fiber and calcium are well-balanced.

Bermudagrass grows well in many places, so it is also a common option for horse feeds. However, it doesn’t contain as much protein as other types of hay, meaning, you will want to provide other protein-rich foods if this is the only forage.

Also, some people argue that bermudagrass hay causes colic in horses. No researches have been conducted to prove this, though. If you are not sure whether this is the best hay to buy for your horse, consult with your vet.

When selecting hay for your horse, your primary goal should be to meet the animal’s specific energy needs. Think about its body type, age, weight, workload, metabolism, and any other factor that may contribute to its energy needs.

Many horse owners will combine legume and grass in their equine diet. Buying mixed bales or giving the horse a flake from each bale type will provide medium protein and energy counts and a balanced calcium-phosphorous ratio than pure grass or alfalfa.

As mentioned earlier, how much you will spend on a bale of hay will largely depend on the quality of foliage. While there are many different vegetation types that can be used to make hay bales for horses, the most popular are made from alfalfa, Timothy, and bermudagrass.

Timothy and bermudagrass being grass hays have only 10% protein whereas alfalfa has 29% protein.

Alfalfa often comes with a higher price tag due to its high proteins, fats, and nutrients. A bale of hay containing Timothy alone will cost slightly lower. If legume hay is added to it, then the price will go higher because the amount of nutrients will also go higher.

So, yes, legume hay is more expensive than grass hay, and that’s because it is nutrient-packed and you don’t necessarily need to supplement it with other feeds to give your horse a healthy diet.

Factors Affecting the Price of Hay 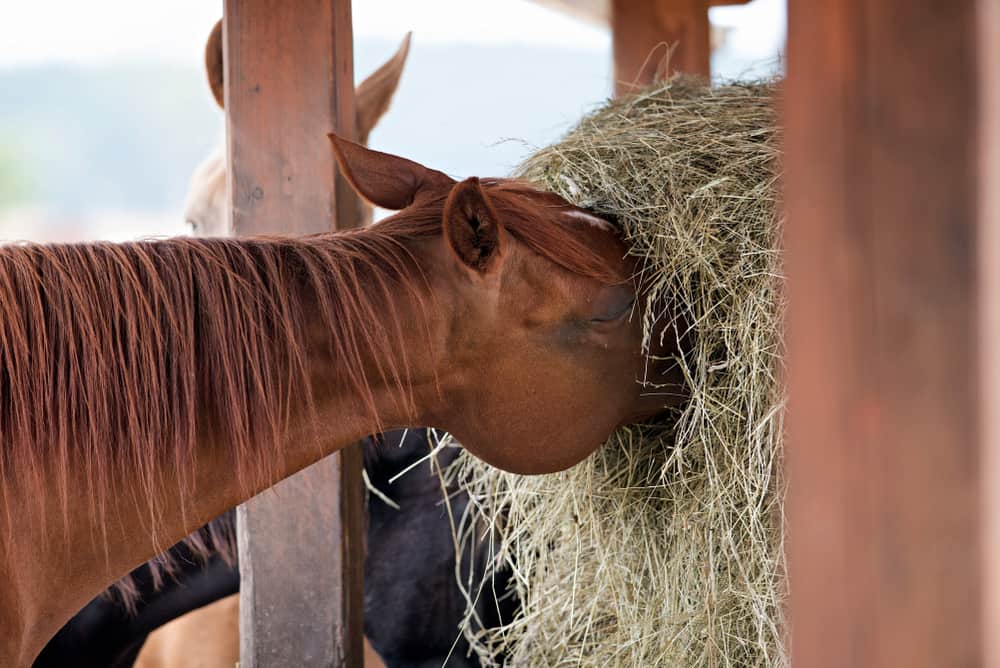 There are many elements that play a role when it comes to how much a bale of hay costs. In places that experience drought seasons like Arizona, weather can influence the costs. Demand in the place of origin can also cause low supply and exaggerated costs.

Where other crops are more favored than hay, there could be a decrease in availability too. Here are more factors that influence hay prices:

If you are purchasing your hay from a company in a rural area, you can expect the price to be much lower than when buying from a larger company.

Sometimes farmers may also have hay bales that have been sitting in the storage for a while that they may want to give away to create room for new bales.

Time of the Year

People don’t buy hay much in the winter or in the fall, which means there will also not be many options. Make your purchase right before the beginning of the season. Not only will there be plenty of options; the prices will also be lower because many people will be selling.

The type of hay will influence the amount of nutrients in it and, therefore, the quality and price of the bale. Mixed bales will generally be pricier than single-type bales.

How Much Hay Does Your Horse Need? 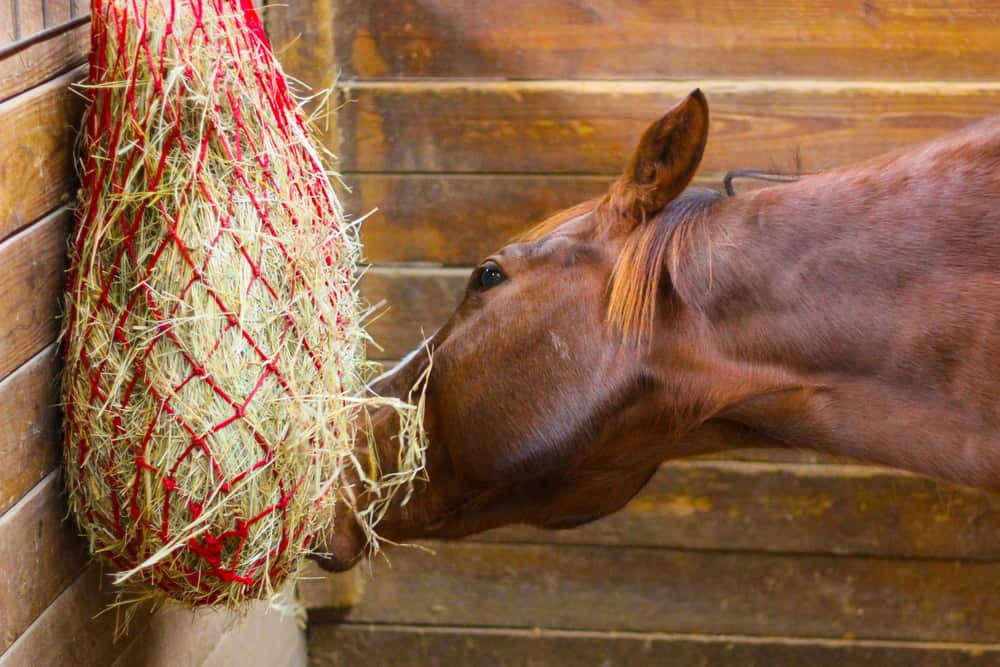 The amount of hay to feed your horse will depend on how much it weighs. Experts recommend feeding a full-grown horse between 12 and 15 pounds of hay every day. If a horse weighs, say, 1, 000 pounds, the amount of hay it should be fed should be about 1.5% to 3% of its body weight.

Of course, this is just an estimate; horses will consume more based on how well they digest the food and the amount of work they do. Also, if the hay is supplemented with something else, then the horse won’t need to eat too much of it.

Generally, ponies will need less hay than larger breeds like the Shire that can eat up to 30 pounds of hay a day. You see, ponies have a much slower metabolism than larger horses. They won’t, therefore, need to feed as much as a draft horse unless they are working extremely hard.

Young ponies and those with health issues may need to feed a little bit more to keep them in good shape, but still not as much as larger horses.

It is important that you keep track of your horse’s health condition and the amount of work they do every day and make adjustments in the amount and richness of hay accordingly.

If in doubt, talk to your vet. That way, you will ensure you are feeding your horse just the right amount of hay, which will help you plan the next buy accordingly.

Have you bought a bale of hay recently? What choices did you make to get the best value for your money? Tell in the comments.

1 thought on “How Much Does a Bale of Hay Cost for Horses? (Saving Tips)”