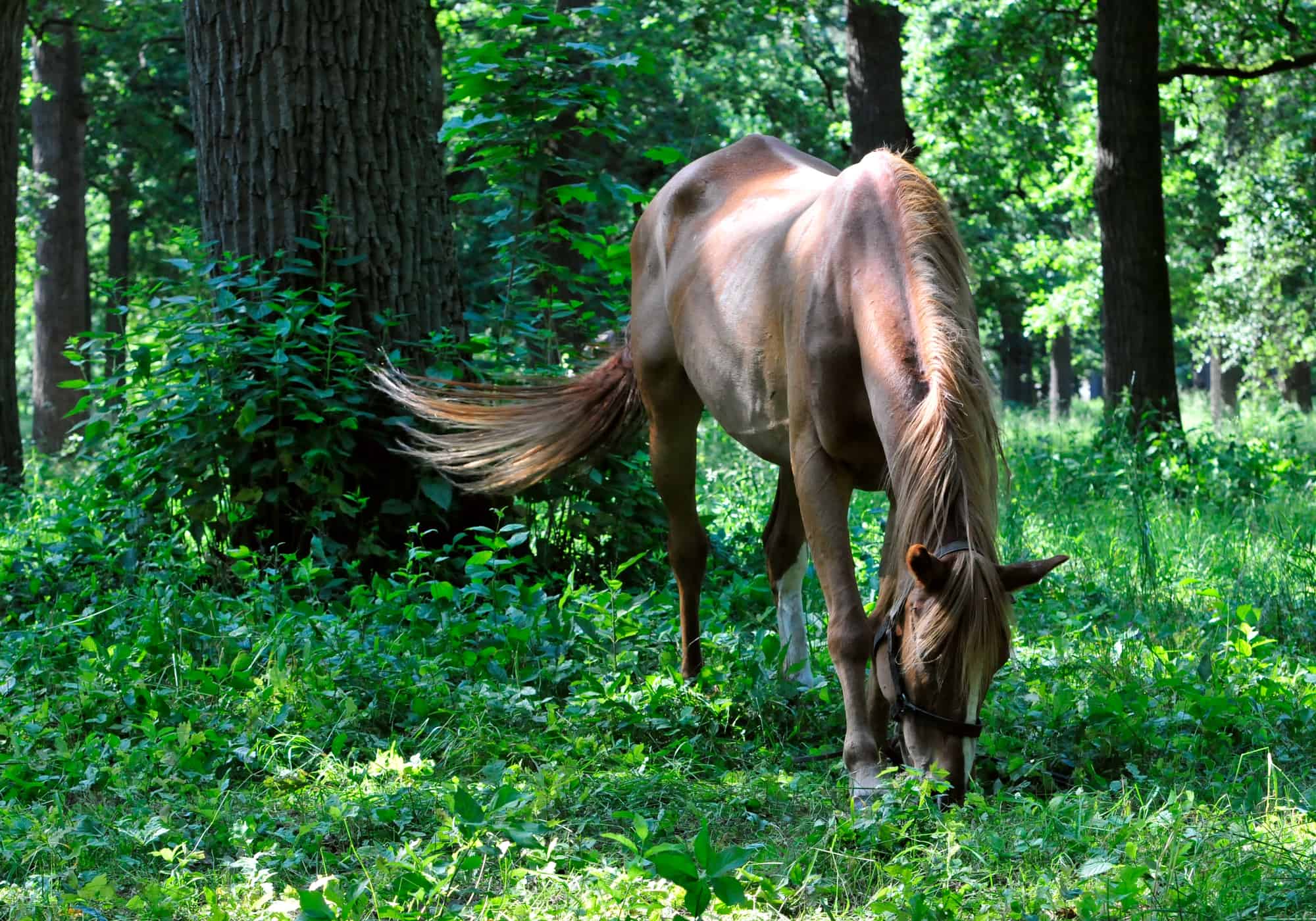 Different types of animals’ classifications can lead to much confusion about the organs in their bodies. The evolution of all beings has done such a fantastic job creating variety and diversity everywhere you turn around. The same is with animals and their biological structures. Therefore, you shouldn’t make haste judgment and compare the animals so quickly, as you may mix up facts and trigger inaccurate beliefs.

The perfect example is misinterpretation and confusion regarding the horse’s stomach. The generalization and ignorance about the horses’ physiognomy have led many to believe that horses have more than one stomach. However, it is not true at all. So, let’s see how many stomachs does a horse have and why it is so significant.

As you have already known, all living beings need energy to move, grow, and reproduce. They need to consume food as a source of calories, giving their bodies the fuel for all activities. In other words, they need to eat.

The system in everyone’s body that takes care of turning food into energy is the digestive tract. It is highly complex and has many organs, plus not all of them are the same. Even if animals belong to the same group, such as carnivores or herbivores, it doesn’t mean they will have the same organs for digesting food. 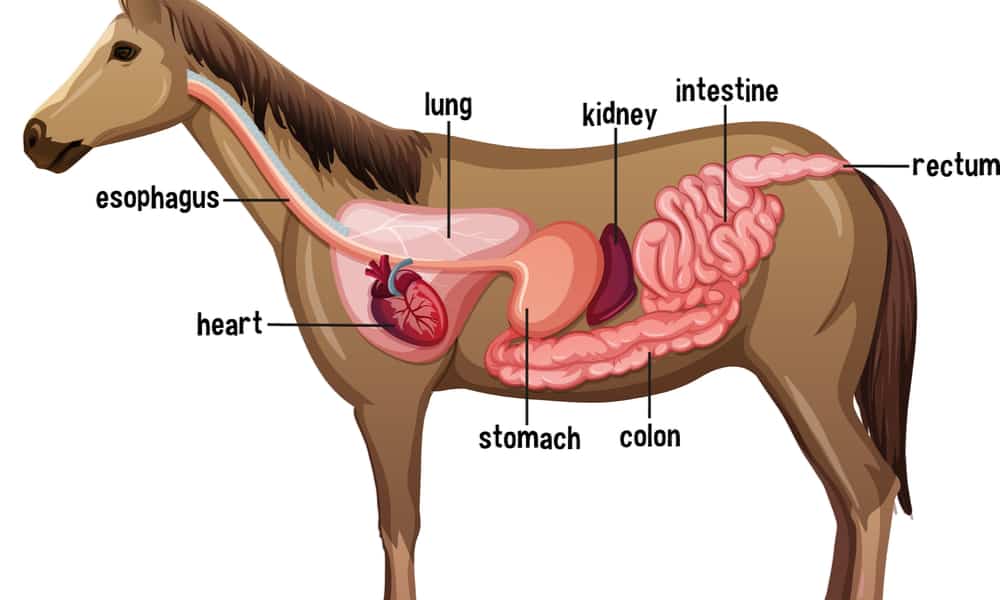 Digestive systems include a few organs, like the mouth, esophagus, stomach, and small and large intestines. However, you shouldn’t think it is written in stone that living beings need to have all those organs to digest food.

For example, plants derive food from the soil and sun without having a stomach at all. On the other hand, some animals have no stomach even though they eat food and have mouths. As mentioned before, the diversity and combination of different organs and ways of digesting food are numerous.

Scientists professionally describe the stomach as an expansion of the proximal lumen that can have different shapes. Simply put, it is the opening in bowels that needs to have a particular form.

The stomach has a distal sphincter structure that moves the food inside it and the rest of the gastrointestinal tract. Thanks to gastric acids and pepsinogen, gastric secretion, the stomach can successfully crush and digest food.

Animals with One and More Than One Stomach 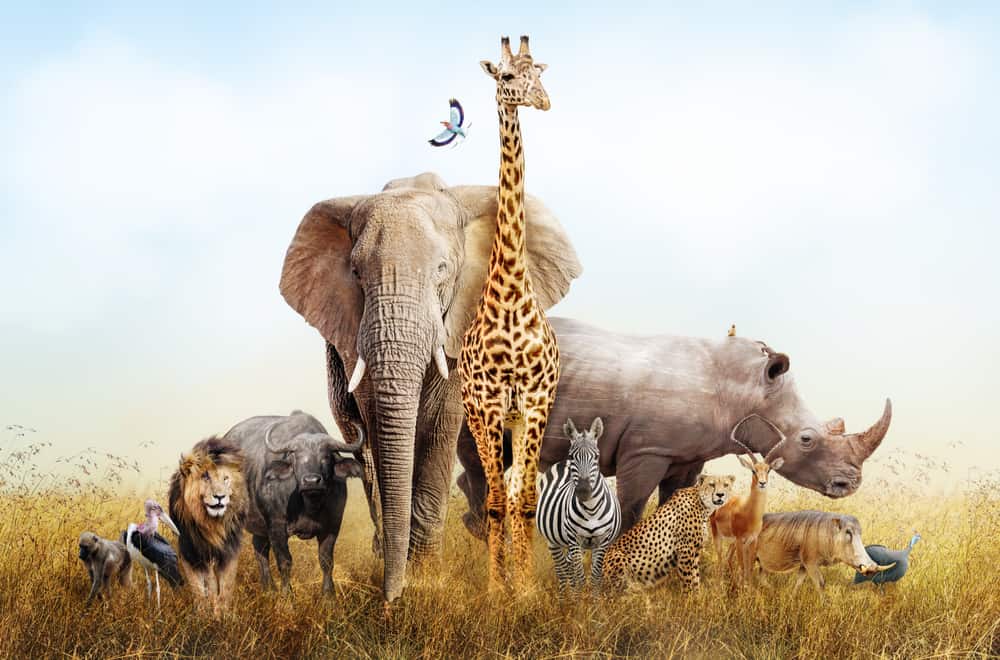 The animals with one stomach have a monogastric digestive system, while others have more of them. Some animals even started their evolution with the stomach, but they lost it over time.

It is possible to classify animals into three groups, depending on the food they eat:

As you can guess, their digestive system differs significantly, including stomach number and structure.

Animals with one stomach

You can find animals with one stomach in all three groups. Usually, carnivores and omnivores have one stomach, but it is not so strange that some herbivores developed the need only for one stomach.

As you can guess, horses have one stomach, making them unique and different in many ways from other herbivores.

Animals with more than one stomach

By default, animals with multiple stomachs are always herbivores that take nutrients from the plant. As plants have layers of cellulose that are hard to break, more stomachs mean longer and better absorption of nutrients and better digestion.

These animals need to use the fermentation process to deal with cellulose, so they usually have three or four stomachs.

Believe it or not, you can find some subgroups in mentioned groups of animals. Their classification depends on how they ferment cellulose and if they have or don’t have a rumen. 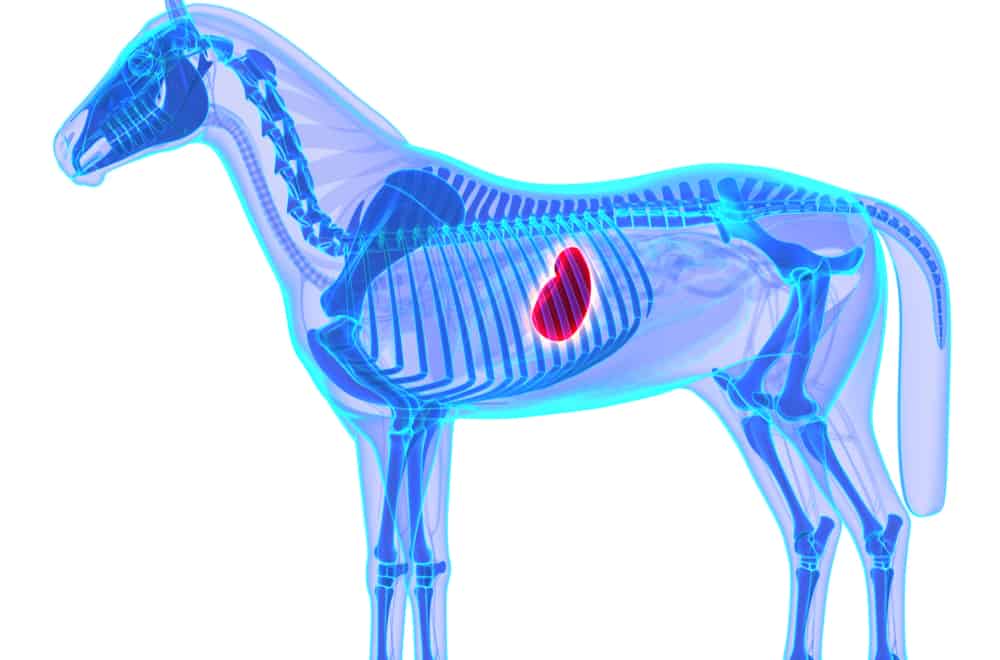 The physiology of the horse’s digestive system made these animals so specific and different from other herbivores. Any possible confusion exists because they are herbivores and eat grass like other animals from that group.

In other words, they need to break cellulose similarly to cows and goats but don’t need multiple stomachs for that process. The difference is in cellulose digest levels:

The horse’s stomach is different from other herbivores, but it is also specific compared to other domestic animals. Believe it or not, horses have the smallest stomach by the average animal size.

What Happens in the Horse Stomach? 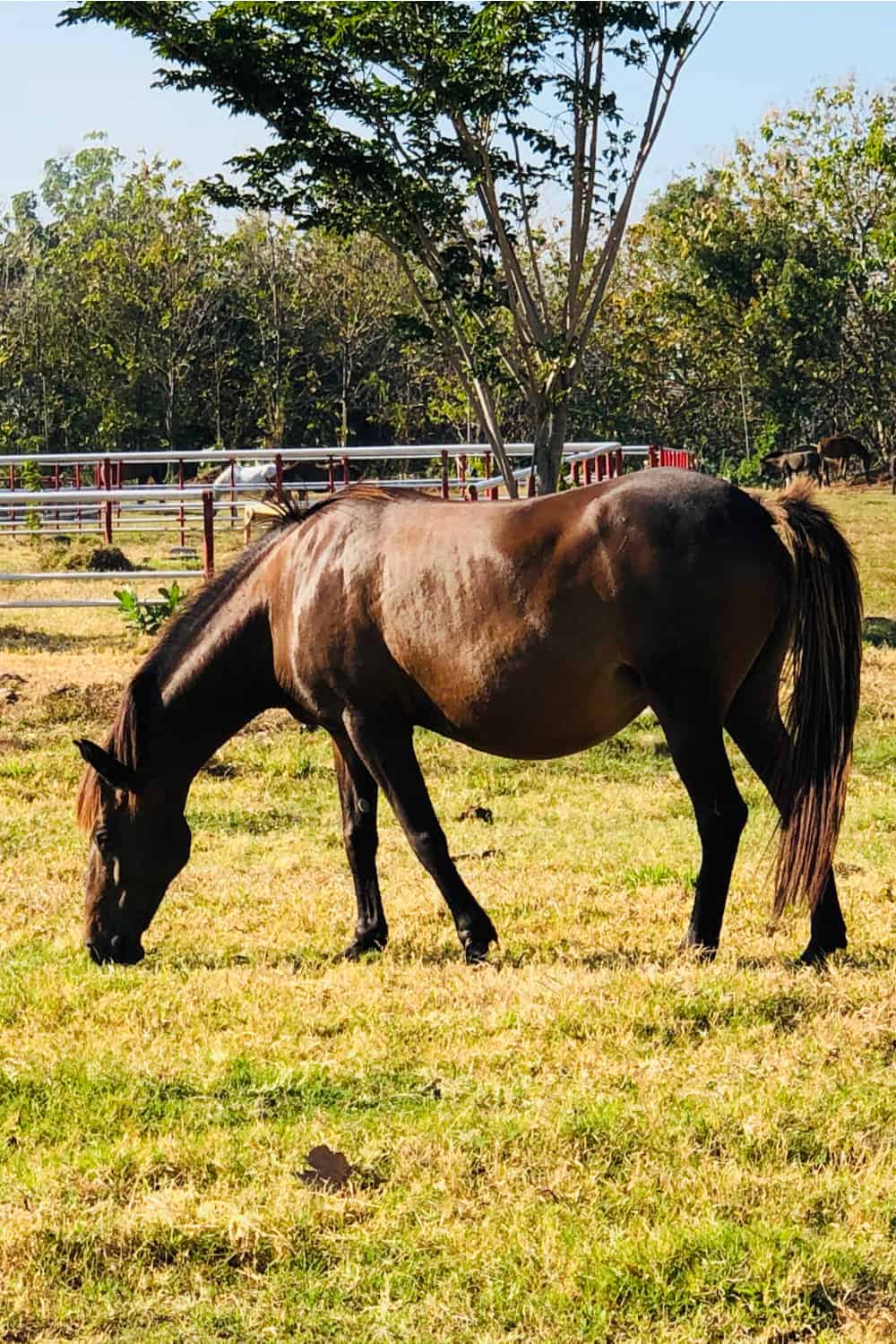 First, let’s take a look at the horse’s stomach parts. At the entrance is the esophagus, followed by the fundus area, stomach body, and gastric gland area. The last part connected to the small intestine is the pyloric gland area.

When the food reaches the stomach, it is mixed with hydrochloric acid and pepsin, digesting enzyme. The solid food parts are crushed, and the digestion of proteins starts.

As soon as the pH level increases to 5.4, the fermentation stops. Then, the pepsin and stomach acids start the degradation of fats and proteins in the fundus area.

When digested food reaches the pyloric region, the final stomach destination, the pH decreases to 2.6 and eliminates fermentable lactose-bacteria. In this area, protein digestion is the greatest.

Digesting food in the horse’s stomach is very specific as this animal can digest cellulose and derive nutrients from the grass and hay not only in the stomach. Thanks to particular microorganisms in colon parts, fermentation in the hindgut and cecum help in food digestion.

Consequently, horses can process food quicker than animals with many stomachs. Even though food goes quicker through their digestive system compared to cow’s or goat’s ones, the result is impressive.

If you wish your horse to have a happy and long life without any digesting problems, you should consider its delicate stomach. It is necessary to feed your animal well and provide a lot of fresh and clean water. Always keep it hydrated regularly and provide enough water to drink at least twice a day.

Advantages of Having One Stomach 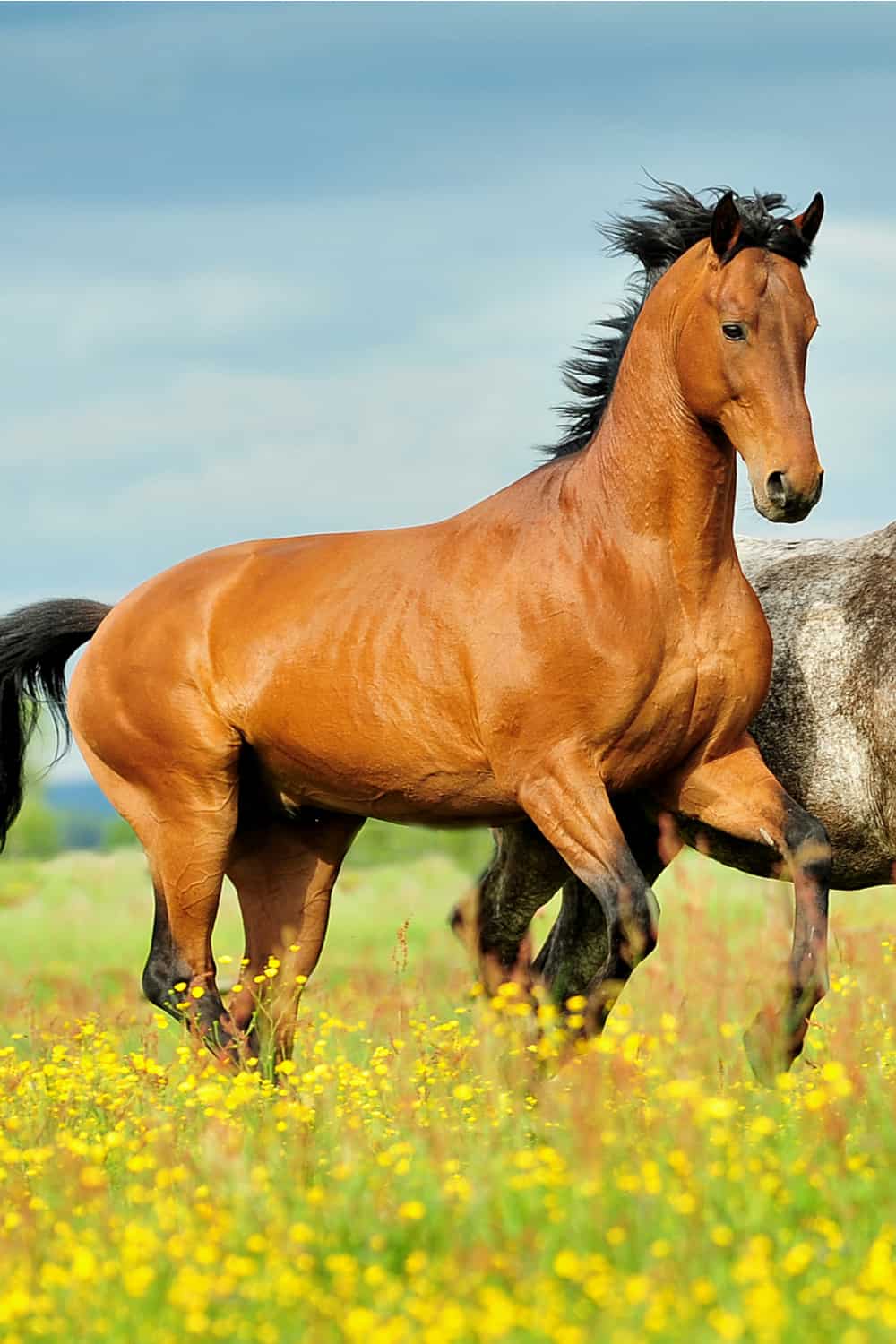 Horses enjoy a few advantages of having only one stomach.

Firstly, horses are built to be fast and run away from danger. Only one small stomach allows these animals more space in the abdomen and lighter bodies. Thanks to their anatomy, Equidae are so agile and athletic.

Secondly, horses digest food faster than other herbivores. Their stomach structure allows them to eat large quantities of food for a short time. However, their digestive system empties when 2/3 full, whether the digesting is over or not. Never forget this to protect your animal from starvation.

Thirdly, horses maintain their weight better than cows due to fast food processing. On the other hand, they need more energy to be active.

Disadvantages of Having One Stomach 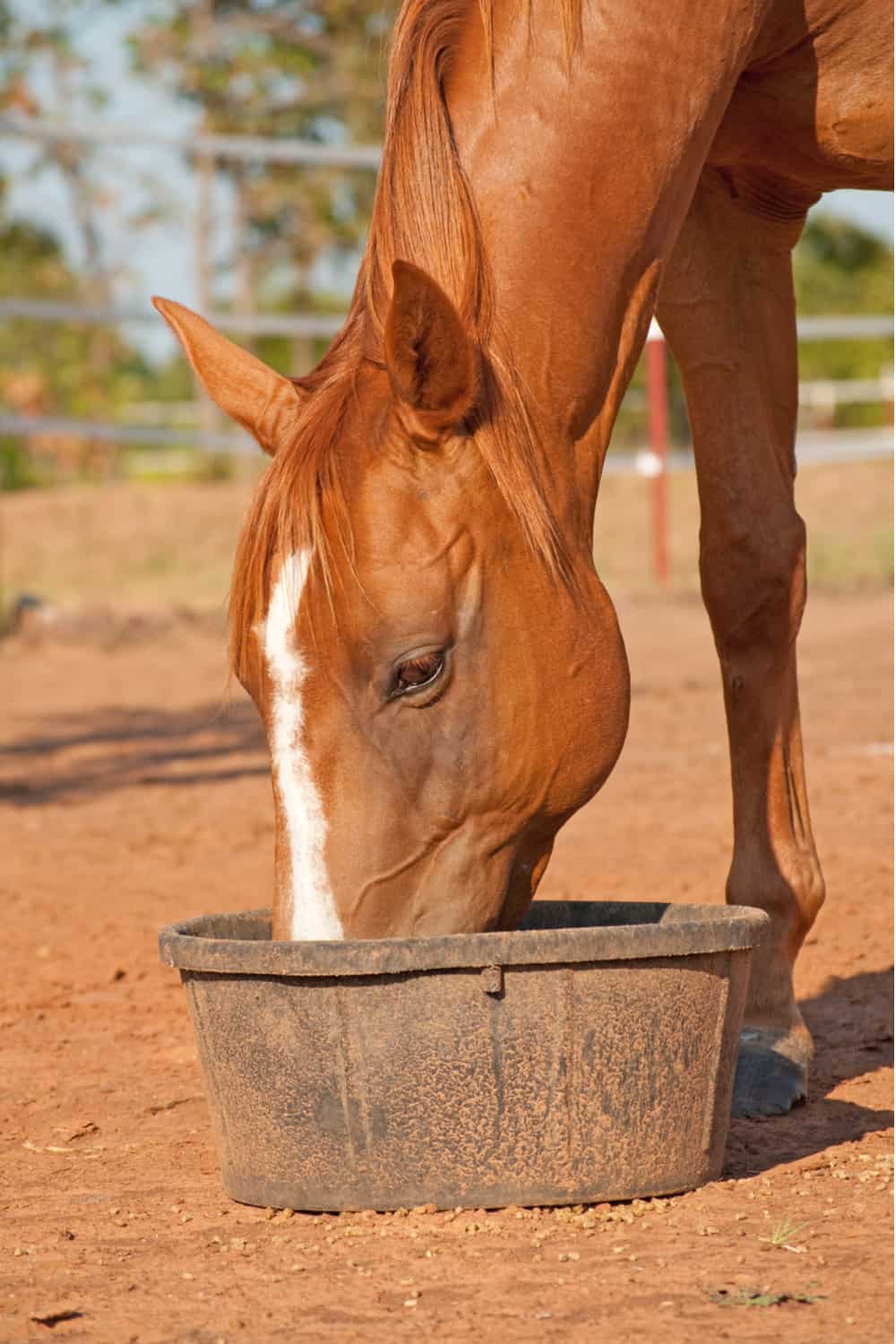 The primary downside of having only one stomach is that horses don’t extract all essential nutrients from eating as cows and sheep do. That affects their need to eat every four hours.

Be aware that your horse needs to be adequately fed in that period. Otherwise, it may suffer from some severe digestive problems.

Finally, horses often have a problem because of having very sensitive gastrointestinal bacteria in their digestive system.

It is impressive to know that the food the horse eats remains only 15 minutes in its stomach, making it the fast-digesting system indeed. After being a short period in the stomach, food moves to the small intestine. In other words, your horse’s stomach will be entirely empty after only 24 hours without regular feeding.

Another fascinating fact about these majestic animals is that their stomachs usually hold only about 2 to 4 gallons (7.6 – 15 l) of water. It is a pretty small amount compared to other herbivores’ digestive systems.

When it comes to fun facts about the horse’s digestion, you should know that it chews only on one side of the mouth at a time. It seems like they try to be polite and chew with their mouths closed.

It is necessary to highlight that the horse eating habits are unique and different from most mammals, especially other herbivores, because of specific stomach anatomy. In fact, horse digestion is more similar to humans, so you shouldn’t forget to feed your animal with high-quality food regularly.