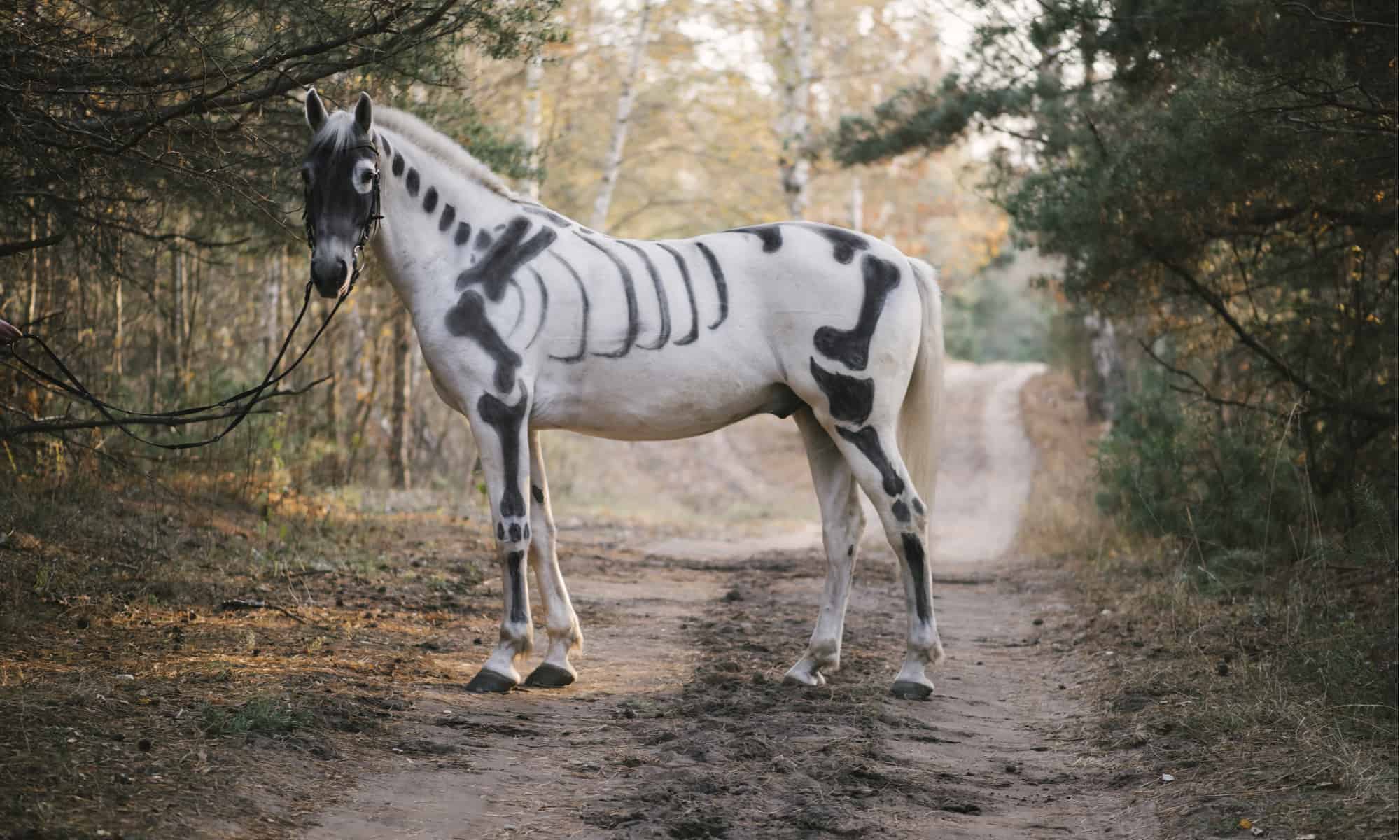 Horses are amazing animals, and we love learning more about them. Today, we’re taking a look at one of the most fascinating aspects of horse anatomy – their bones!

We’re going to share 14 facts about the horse skeleton, from head to hoof! And we think you’ll find plenty to surprise and astonish you.

So without further ado, let’s get to the bones of the matter…

1. The skeleton has three main functions 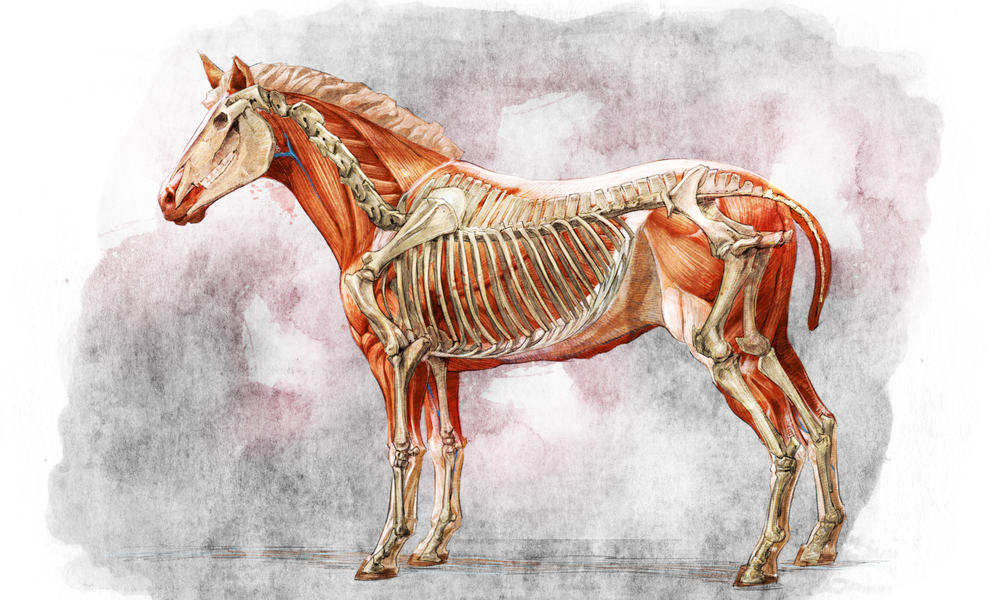 The skeleton performs the same roles in horses as other animals – and it does more jobs than you might think.

First and most obviously, it gives the body its shape and holds it up. Think of it as a bony form of scaffolding.

And together with the brain and muscles, the joints between the bones are what allow horses – and all other animals – to move. We’ll find out more about that later.

2. Horses’ bones can be divided into five groups …

Bones take different forms, and these can be divided into groups. There are five groups in the equine skeleton: long bones, short bones, flat bones, irregular bones and sesamoids.

Long bones are exactly as you’d imagine – long! Not surprisingly, you’ll find most of the horse’s long bones in its legs. There, they help the horse to walk, and also provide storage for the minerals it needs for its bodily functions.

Short bones are found in the joints, like the hock, fetlock and knee. There they help absorb shocks as the horse moves.

Flat bones are the ones that protect the horse’s internal organs. Ribs are a good example, curving to form a cage around the heart.

Irregular bones also have a protective function. In this case, they protect the central nervous system. The most obvious examples of irregular bones are vertebra.

Finally, sesamoids are bones that sit inside a tendon. The most well known of the sesamoids is the navicular bone, which is found at the back of the hoof.

There are around 205 bones in a horse’s skeleton. The precise number varies by breed, with Arabians having fewer vertebra and ribs.

Oddly enough, that number is very similar to the number of bones in an adult human. Children have more – around 270 – but over time, many of those fuse together. A mature adult person will have anywhere between 206 and 213 bones.

But while the number may be similar, there are a whole lot of differences between a horse’s skeleton and a human being’s. So let’s take a look at a few of them …

4. Horses don’t have a collarbone

That’s right, horses lack a collarbone (also known as a clavicle). That’s because their front legs are attached to their spine by muscles and tendons, not by bones. That has some advantages.

When the horse runs, its movement isn’t restricted by the collarbone getting in the way of its shoulder blades. And a more mobile shoulder blade gives the horse a longer stride, allowing it to run more efficiently.

Contrary to popular belief, a horse does, however, have one of the other well-known bones in humans – the funny bone! And there’s also a famous racehorse, now retired, called D’Funnybone!

5. Horse skulls have more than twice as many bones as human skulls …

When it comes to their skulls, horses have many more bones than humans – 34 in comparison to 14. That’s perhaps not surprising when you consider how different horse’s heads are in size and shape to those of humans.

Almost all the bones in an equine skull are fused together, providing a stable structure to protect the brain. The only part that moves is the jaw, with the flexibility provided by the temporo-mandibular joint. This movement is what allows the horse to chew.

Unlike humans, horses cannot breathe through their mouths. This, however, is not related to the structure of their skulls. Instead, it’s a result of the soft palate which completely divides the horse’s mouth from its nasal passages.

6. … And they have some clever features

There are some other features of the horse’s skull that are quite different to that of humans. And they give the horse some impressive abilities.

Perhaps most amazing are the position of the orbits. These are the cavities in the skull in which the horse’s eyes sit.

Unlike humans, whose eyes are positioned on the front of our faces, horses’ orbits are located on the sides. They also allow the eyes to turn in such a way that the horse can have almost 360-degree vision.

The only black spot if you’re a horse is a tiny area directly in front of and behind your head. 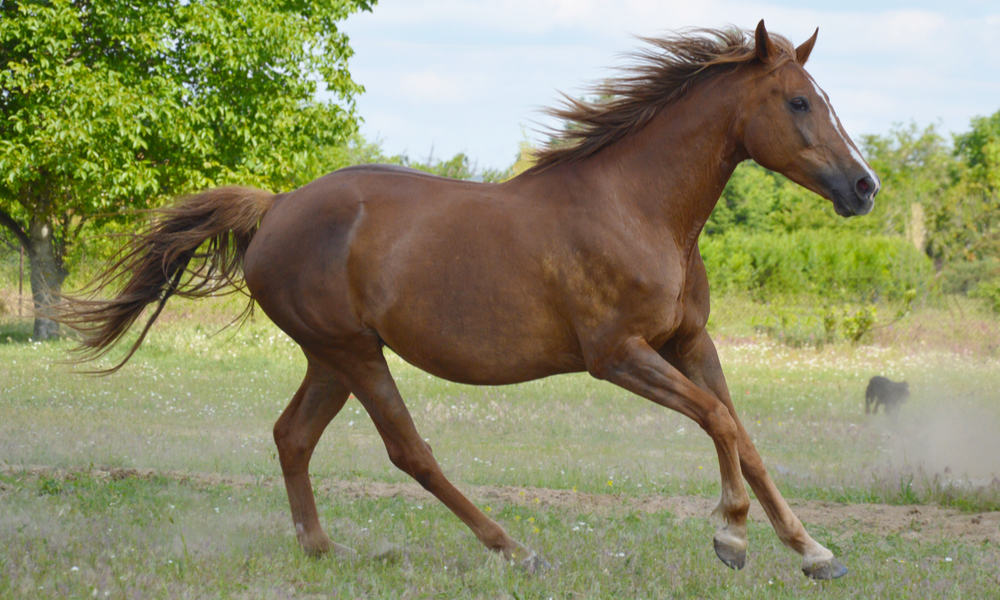 Horses have lots more vertebra than humans – around 54, compared to 33 in human children and 24 in adults.

Between 15 and 25 of those vertebra are found in the tail. These are known as coccygeal vertebra, and the average horse has 18 of them.

As with ribs, the precise number of vertebra can vary according to the breed of the horse.

Arabians are again an exception, with some horses having fewer vertebra than other breeds. They often have five lumbar vertebra, as opposed to the more usual six. And they can also have 17 instead of 18 thoracic vertebra, and 16 or 17, rather than 18 coccygeal vertebra.

8. The poll is the highest part of the skeleton

When horses have their heads upright, the poll is the uppermost part of their skeleton. It’s a bony bump that sits right in the middle of their head, just behind their ears.

Many horse riders, however, use the term “poll” or “poll joint” to describe the area between the atlas vertebra and the base of the skull. There’s usually a small dip at that point, and it’s very sensitive to pressure.

It’s also where part of the bridle passes over the horse’s head, and where a headcollar or halter will touch the skull. By lightly pressing this area, the rider can influence the horse’s behavior. That makes it very important in equestrian disciplines like dressage.

9. Horses sometimes have an extra bone in their knee

To enable free movement, the joint here usually has two small rows of three bones. But some horses have one, or even two, extra bones in this area.

These additional bones are small, and while they serve no useful purpose, they shouldn’t cause problems either. They can, however, occasionally be mistaken for a chip-fracture if the horse is x-rayed.

10. Horses have a “middle finger” in their hooves 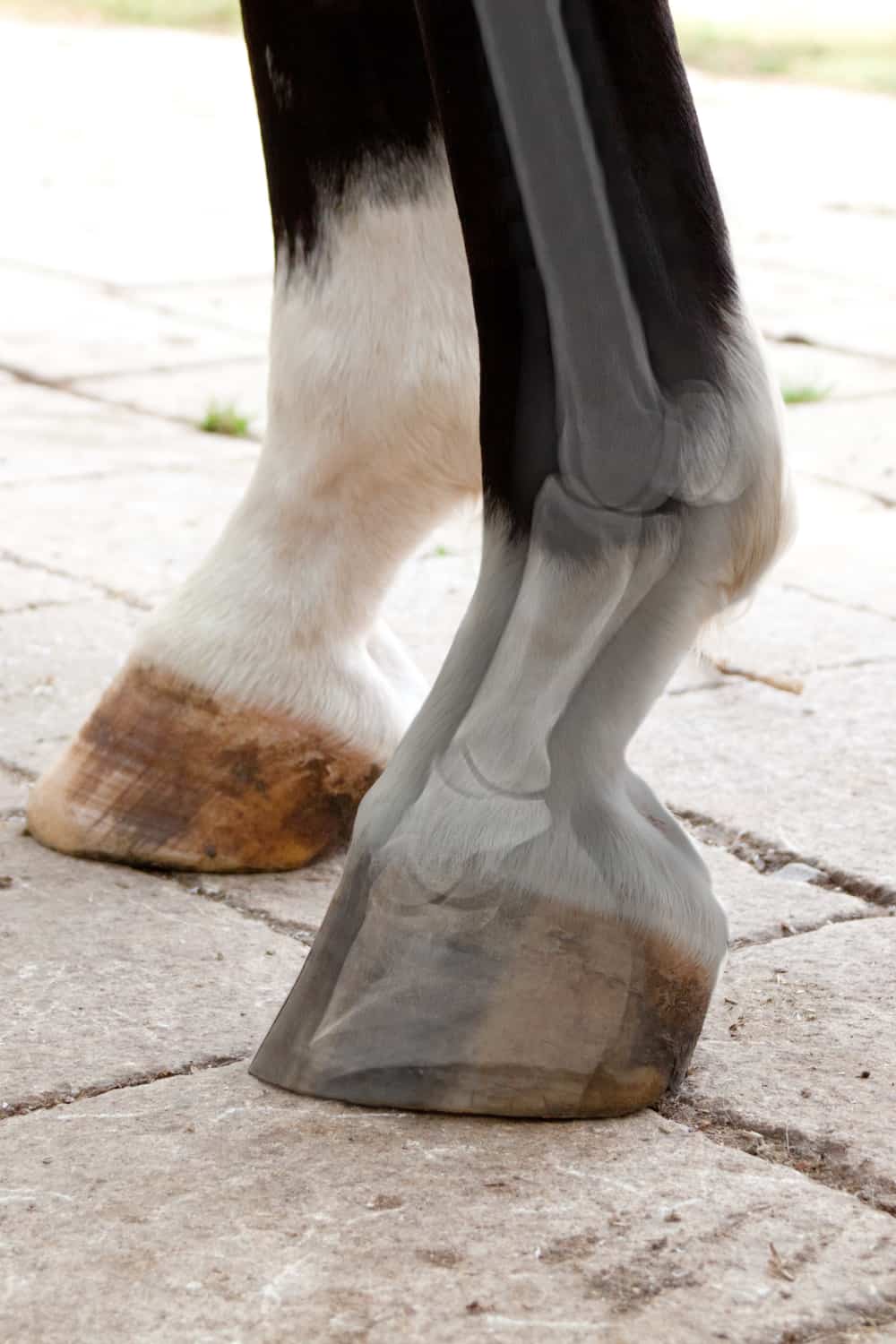 The main bone in the hoof is known by the less than appealing moniker of “coffin bone”. It is suspended inside the hoof by the laminae, a delicate substance that’s a bit like Velcro.

Another name for the coffin bone, the third phalanx, or P3, gives you a clue to its human equivalent. It’s essentially the same as the middle finger!

The other “fingers” have long since disappeared from the hoof through the process of evolution. The remnants of the second and fourth fingers can, however, still be seen in two tapered bones – “split bones”. These sit alongside the cannon bone in the horse’s leg.

That leaves us with the truly astonishing fact that horses essentially walk on their middle fingers!

Most important are the synovial joints. These are found between the vertebra and in the horses’ knee, pastern, fetlock, hock and stifle.

They are formed by the ends of two bones covered in a substance called articular cartilage. It’s this cartilage that allows the joint to move freely.

These types of joints also have a membrane called the synovial membrane. This produces a lubricant, synovial fluid, which also helps to keep the joint working smoothly.

12. Horses get arthritis too

Like humans, horses’ skeletons can be subject to a range of diseases. One of those is arthritis, an inflamed joint that causes pain and stiffness. And just as in people, arthritis in horses is relatively common.

Arthritis is usually accompanied by a swelling of the joint as a result of extra synovial fluid being produced. But not all swelling is arthritis, so tests like nerve block examinations and x-rays may be required to confirm a diagnosis.

The good news is that early diagnosis and treatment of acute arthritis can often cure the condition.

Treatment may vary from a period of rest to injecting the affected joint with anti-inflammatory drugs or steroids. Today, stem cells are also increasingly being used to combat the condition. And sometimes surgery may be used as a last resort.

13. The femur is the longest bone

Just as with humans, the longest bone in a horse’s skeleton is the femur. The precise length, of course, varies according to the breed, sex and maturity of the animal.

When it comes to flat bones, the pelvis is the largest.

And at the other end of the scale, the smallest bones in the equine skeleton are in the ears. These are the malleus, the incus and, smallest of all, the stapes. The latter, appropriately enough, is Latin for “stirrup”!

14. A horse’s skeleton makes up almost half of its body weight 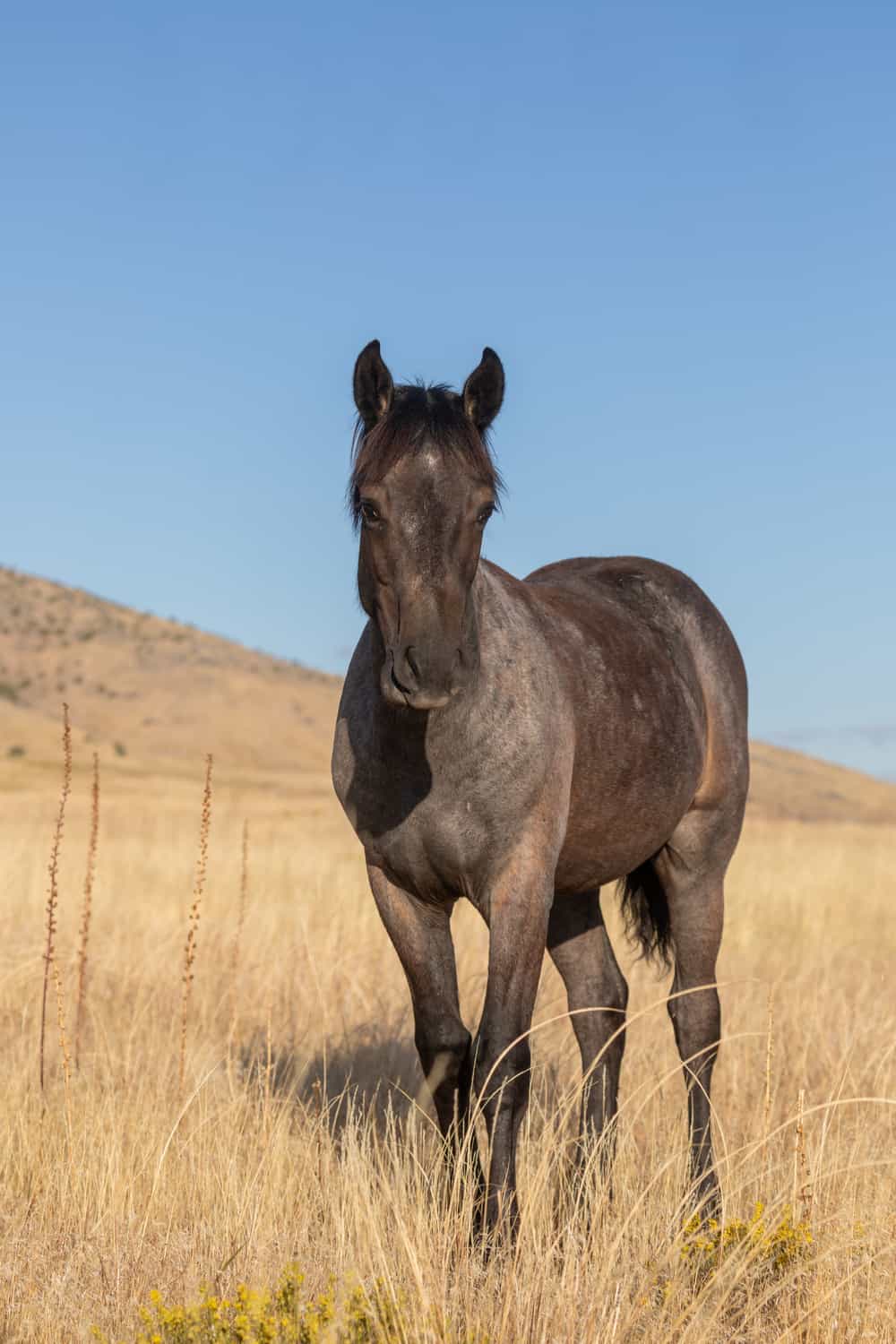 Those of us who call ourselves “big boned” know that the skeleton is a big contributor to our weight! The same is true of horses. But just how heavy is a horse’s skeleton?

The weight will depend on the size of the horse itself. But as a rule of thumb, you can expect the skeleton to account for about 40 percent of a horse’s total body weight. That’s considerably more than for humans, where the equivalent figure is about 15 percent.

The largest of all equine breeds is the Shire horse. Sampson, a Shire gelding bred in Bedfordshire, holds the record for the world’s tallest and heaviest horse. He was said to weigh in at a massive 3,359 pounds.

That would make Sampson’s bones alone weigh an astonishing 1,344 pounds. That’s about half the weight of the average car! Sampson was later – fittingly – renamed Mammoth.

Everything you ever wanted to know about horse skeletons!

That brings us to the end of our review of 14 facts about horse skeletons! We hope you’ve enjoyed learning more about these amazing creatures.

Comparing horses and human skeletons is a fascinating exercise.

We both have roughly the same number of bones in our bodies. The longest bone for both of us is the femur. And in both humans and horses, the smallest bone is the stapes.

But there are big differences too. Horses have lots more vertebra and a more complex skull. And perhaps most amazing of all are their hooves, which have them walking on the equivalent of their middle fingers!

Next time you see a horse, we hope you’ll enjoy knowing more about what’s going on beneath the surface.