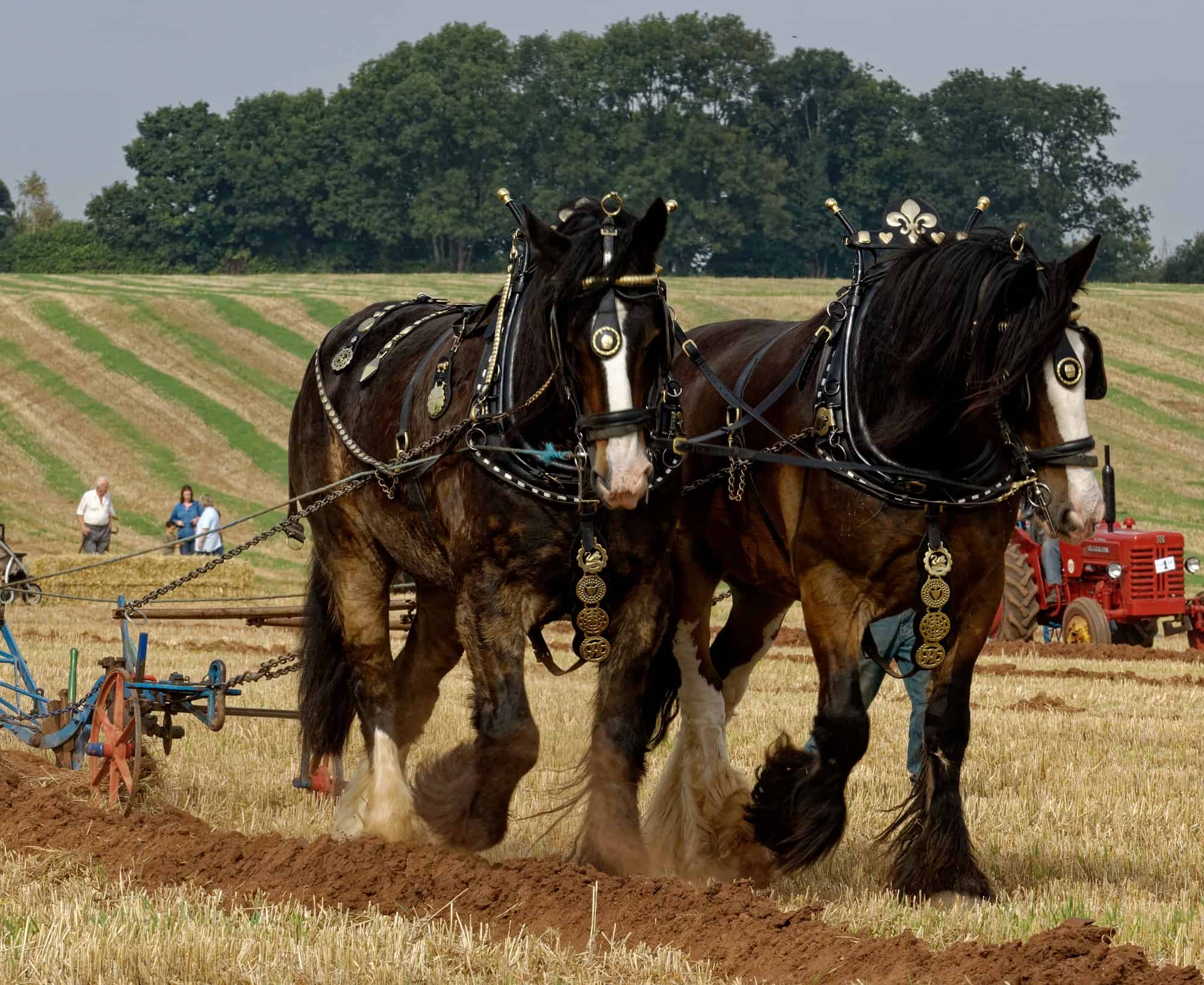 dIn pre-industrial times, draft horses were an important part of agricultural life in many countries around the world. Generally speaking, they are strong, intelligent, docile and willing to work, making them ideal animals for farm work as well as many other purposes.

In the modern world, there is less need for working horses, and they are now far less common than in the past. However, many examples of these magnificent animals still exist, so here we look at 15 draft horse breeds that are either the most important or the most interesting. 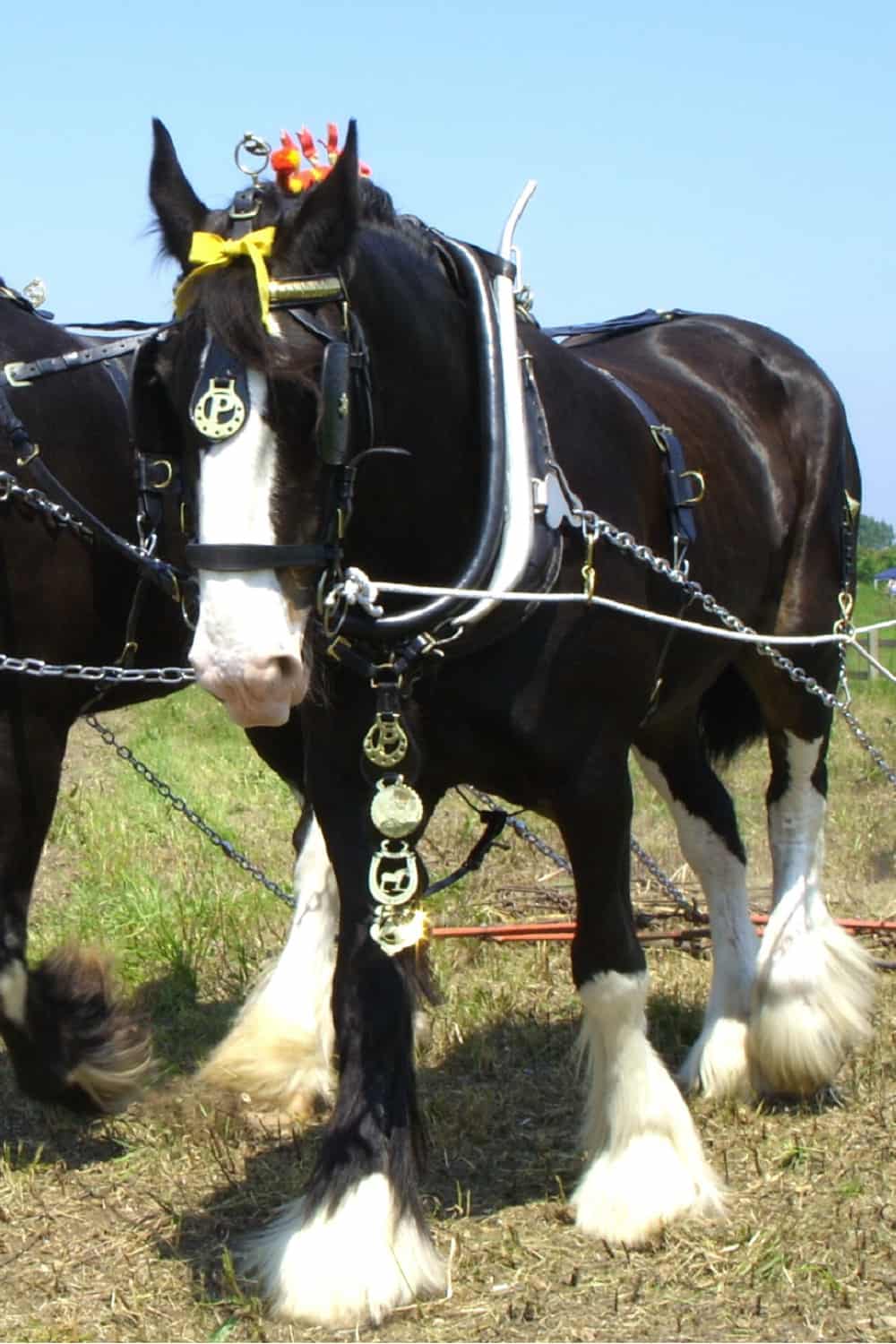 The Shire, a breed of draft horse from England, is among the tallest, largest, heaviest and strongest breeds in the world, with stallions usually measuring around 17.2 hands (178cm, 70in) at the withers.

It boasts exceptional pulling strength and was originally used for farm work and road haulage as well as for pulling barges at a time when England’s canal system formed an important part of the country’s transport infrastructure.

The breed went into decline as railways became more widespread and then especially with the advent of mechanized farming. However, Shire Horses have undergone a revival since the 1970s, and they remain a treasured part of English agricultural and rural culture.

One of the traditional uses for Shire horses was to pull carts to deliver beer from breweries. Although this is now uncommon, a handful of breweries in the UK continue this practice, delivering beer by horse-drawn cart to this day.

The largest horse ever recorded is thought to be a gelded Shire named Samson – whose name was later changed to Mammoth as he attained his famously gigantic proportions. 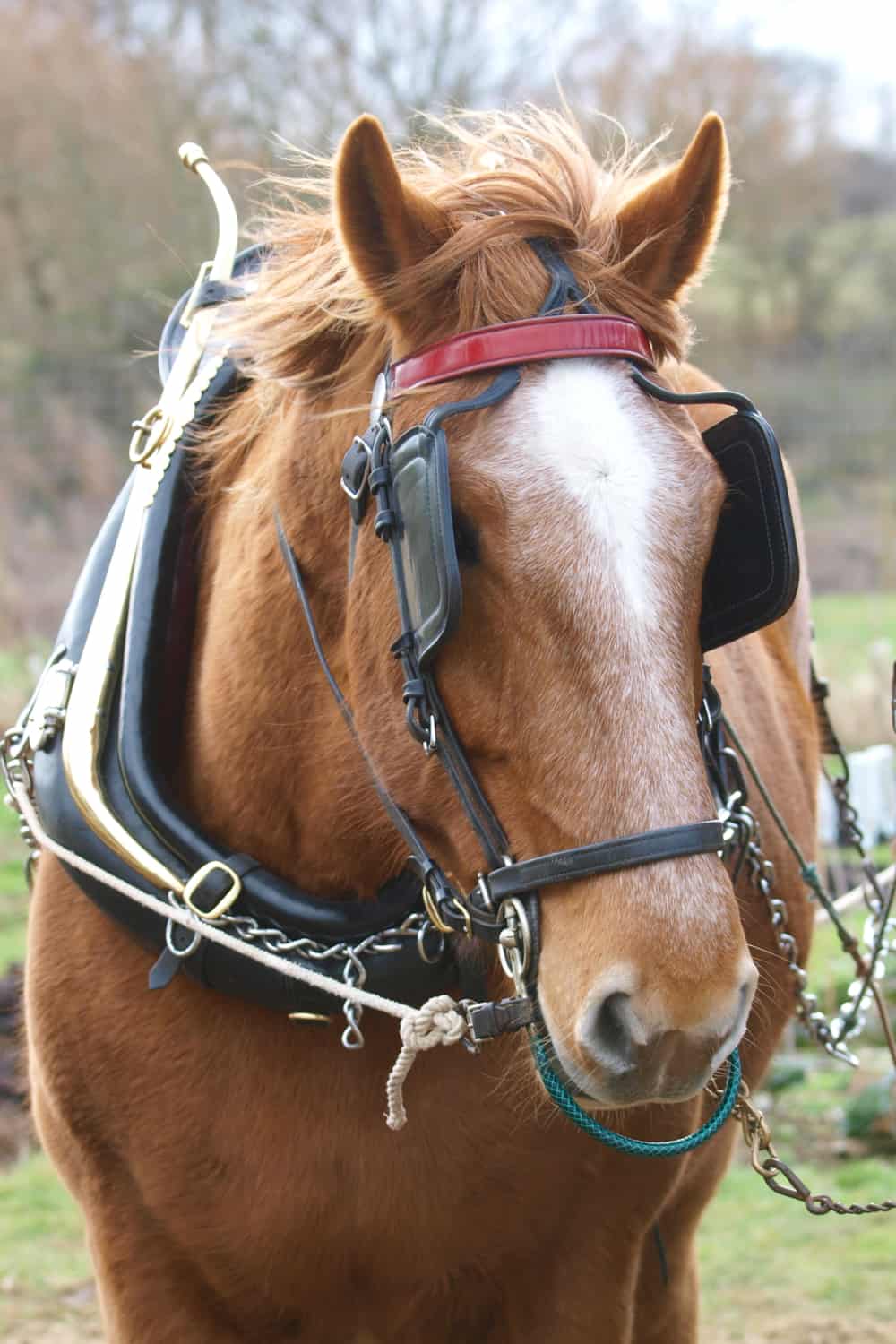 The Suffolk Punch, also known as the “Suffolk Horse” is an English breed that originated in the county of Suffolk, hence the name. It is shorter and stockier than breeds like the Shire, usually measuring 16.2-17.2 hands (165-178cm, 56-70in). It is always chestnut (traditionally spelled “chesnut”) in color.

It was bred for farm work and is considered to be hard-working and with a good temperament. This breed also requires less feed than other similar types of horse, making it a more convenient, practical and economical animal to keep.

The Suffolk Punch was developed in the 16th century and is considered the oldest breed of draft horse in the world to still have the same recognizable form today. However, it is now relatively rare and is considered “critical” by the UK Rare Breeds Survival Trust.

The Clydesdale breed originates in Clydesdale, the old name for what is mostly now the county of Lanarkshire in Scotland. It is thought the breed originated when Flemish stallions were bred with local mares to increase their stature. In the 19th century, Shire blood was also introduced to further enhance the breed.

Clydesdales are tall and powerful, standing at 16-18 hands (162-183cm, 63.5-72in), although they were shorter in the past. They are usually bay in color with marked feathering around the legs, although other colors are possible.

The breed went into serious decline with the advent of mechanized farming and by the 1970s was in danger of extinction. Nowadays, they are a popular parade or carriage horse and are famously used by the Anheuser-Busch brewery in the United States for publicity purposes. 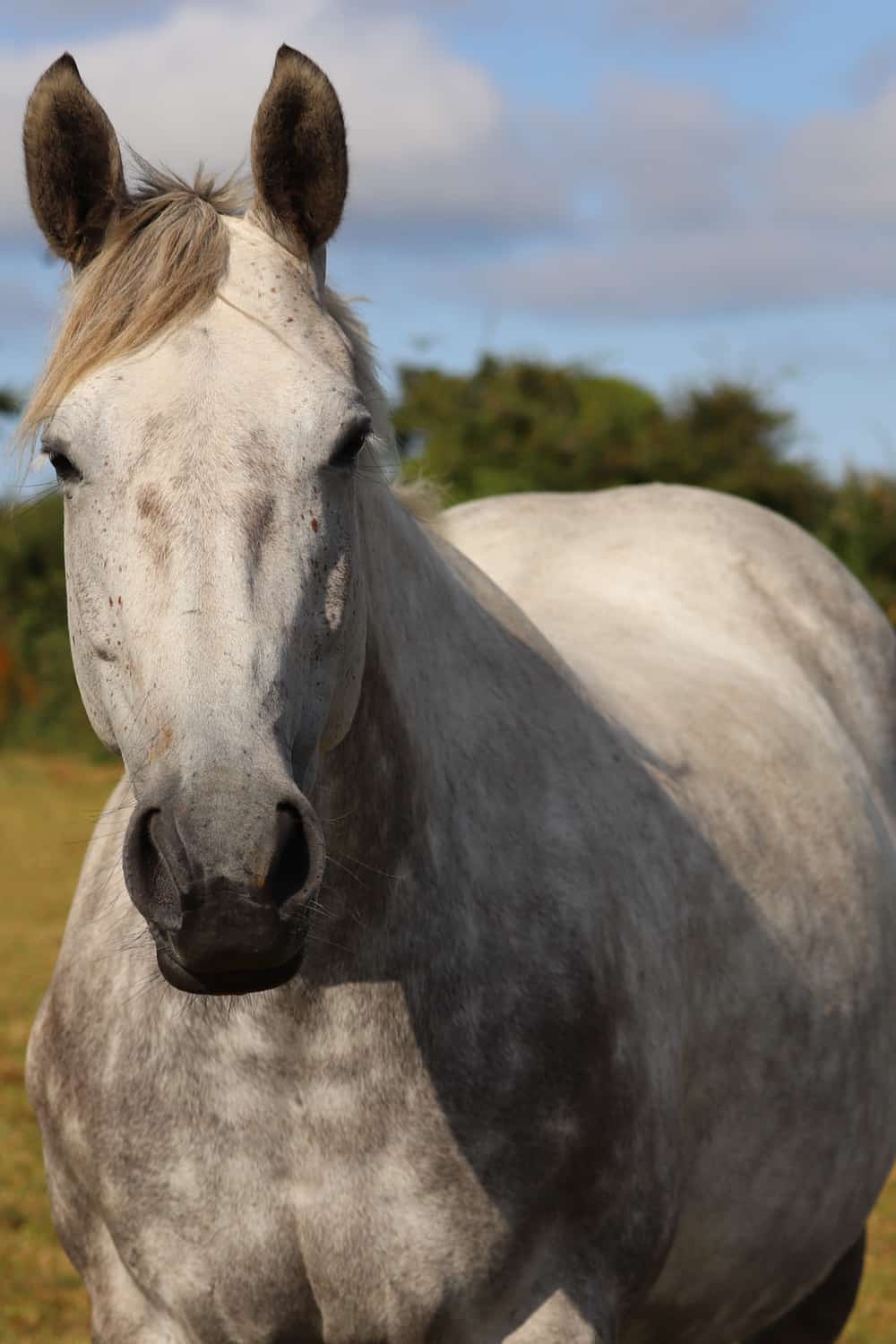 The Irish Draught is the result of centuries of breeding, which included crossing the Irish Hobby with Anglo-Norman war horses, Iberian breeds, Clydesdales, Thoroughbreds and Connemara Ponies.

This horse is often crossed with Thoroughbreds or warmbloods to produce a range of sports horses. However, this practice has put the survival of the breed at risk since many breeders concentrate on breeding sports horses while neglecting to allow mares to produce purebred horses and continue the line. 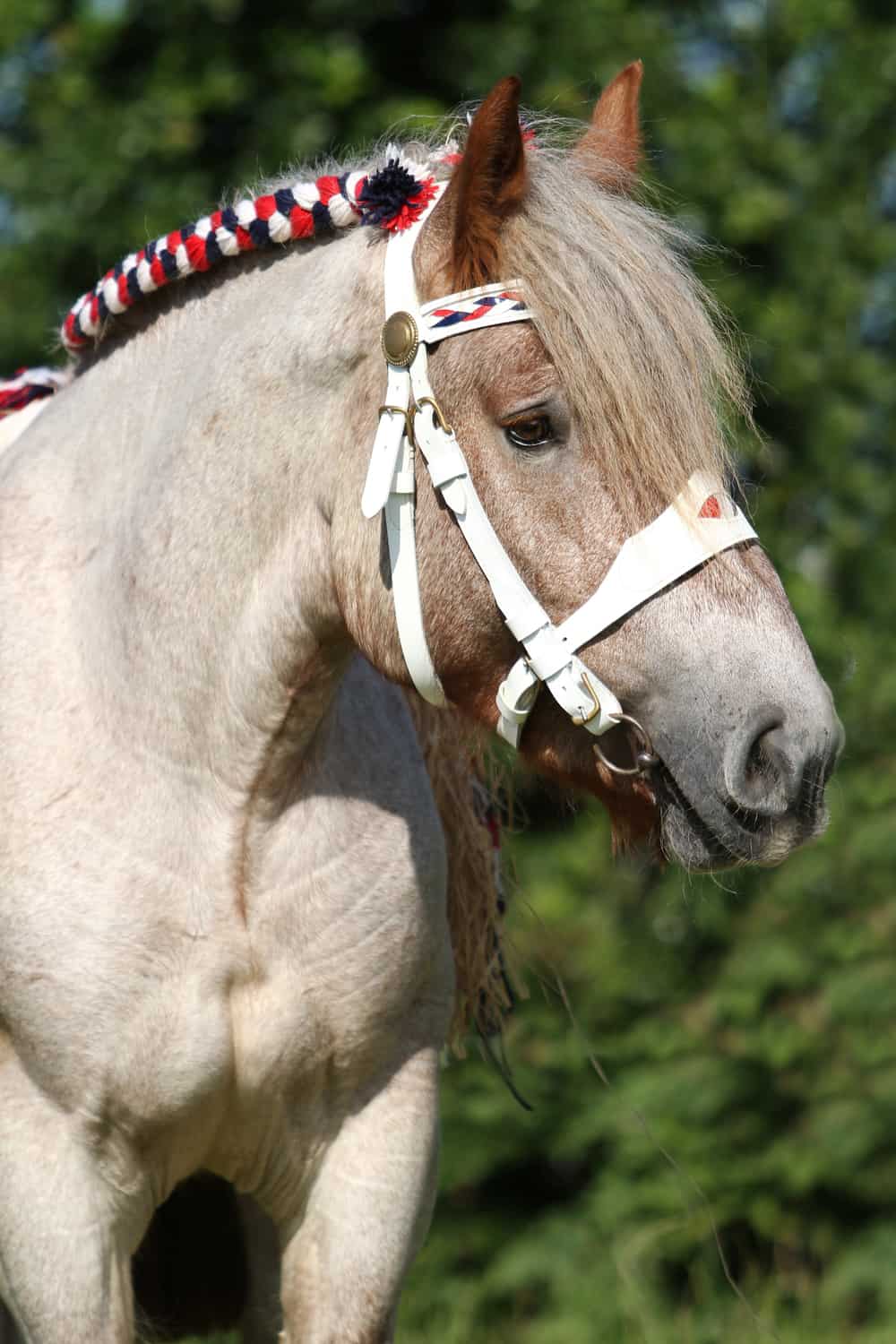 The Dutch Draft is a large, stocky, muscular horse that was created in the early 20th century after the end of the First World War. For a time, it was the most important Dutch breed of draft horse, but like many other breeds, it went into decline as farming became mechanized after the Second World War.

It is characterized by a docile temperament and good stamina. It displays heavy feathering about the legs. 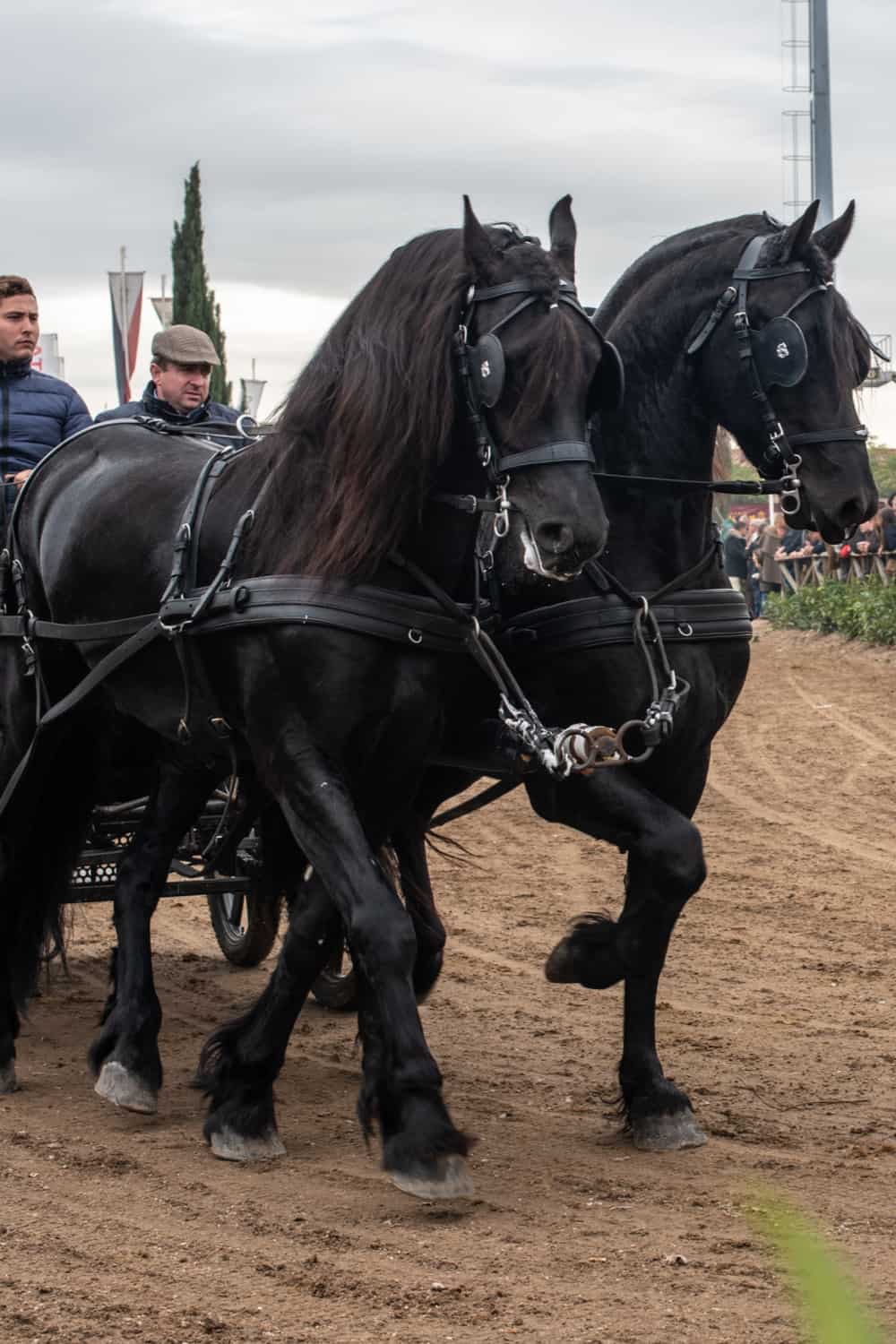 One of the lighter, more graceful draft horses, the Friesian is another Dutch breed. They are typically black, although chestnut and bay specimens also exist. They stand at between 14.2 and 17 hands (147-173cm, 58-68in), although the average height is around 15.3 hands (160cm, 63 inches).

As a versatile horse, they are now used both in harness and under saddle, particularly in dressage. However, due to their relatively slight frame, they are not a common choice for more arduous work like farming.

The Ardennes is a horse with an ancient lineage. It is among the oldest of the modern draft horse breeds, and as the name suggests, it originates in the Ardennes region of France, Belgium and Luxembourg.

Ancestors of these horses were used in the armies of Ancient Rome, and the descendants of that original stock continued to be used as war horses through the ages, both as mounts and to pull artillery.

With stallions standing at around 16 hands (162cm, 63.5in), they are a relatively short and stocky breed with heavy musculature. Nowadays, they are used for farm work, forestry and leisure. This is a breed that is also commonly bred for meat. 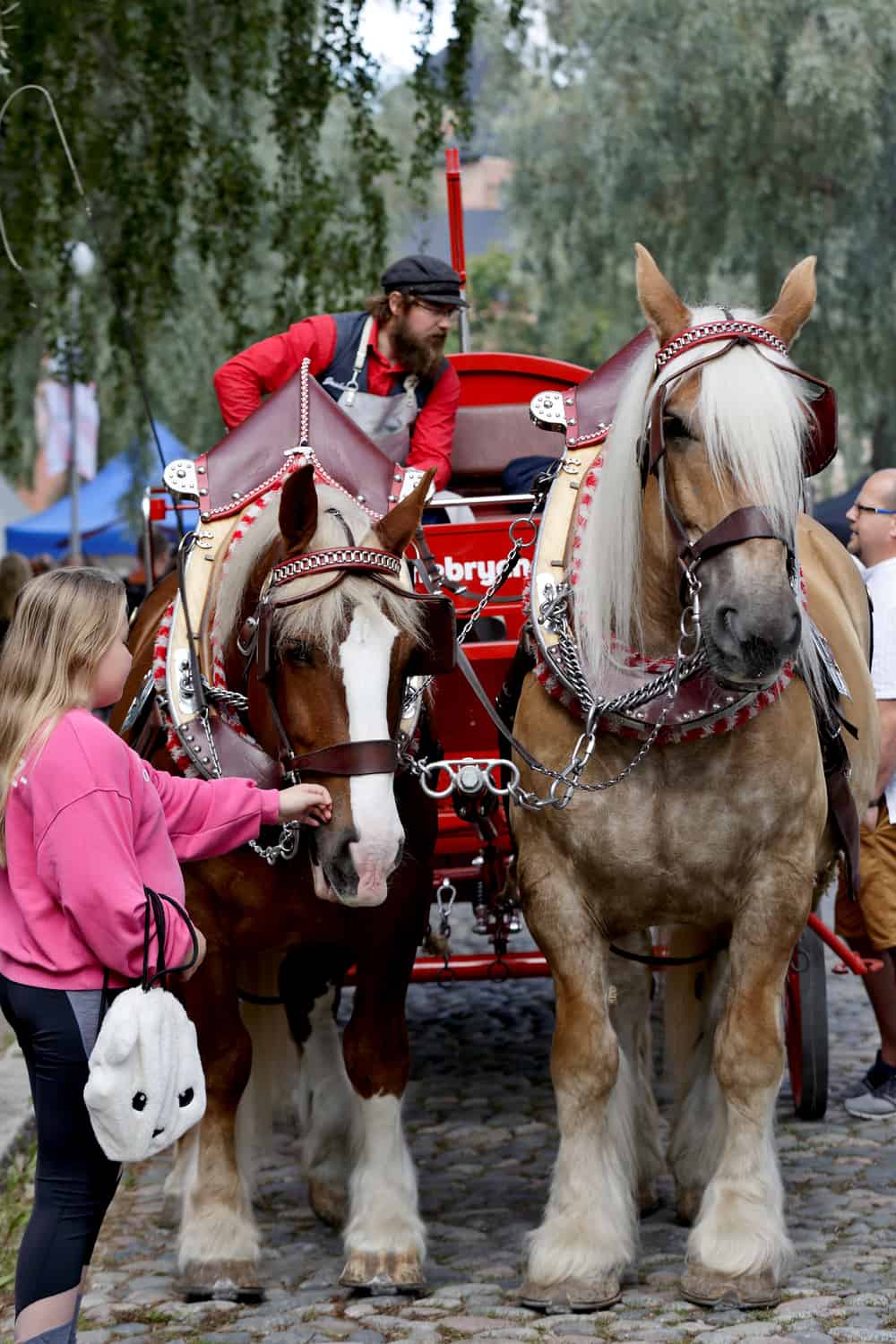 Originating in the Jutland Peninsula of Denmark, the Jutland Horse is most likely the descendant of a breed of horse used by Viking raiders in the 9th century.

The modern Jutland is the result of crossbreeding with other horses and has existed in its current form since the late 19th century.

These horses were originally used on farms, but nowadays they are more commonly found in horse shows. The Carlsberg Brewery in Copenhagen still uses Jutland Horses to transport beer around the city.

Jutland Horses are relatively short and stocky, standing at around 15-16.1 hands (152—165cm, 60-65in). They have a calm and willing temperament and are usually chestnut in color. It is thought that only around 1000 purebred Jutland Horses remain. 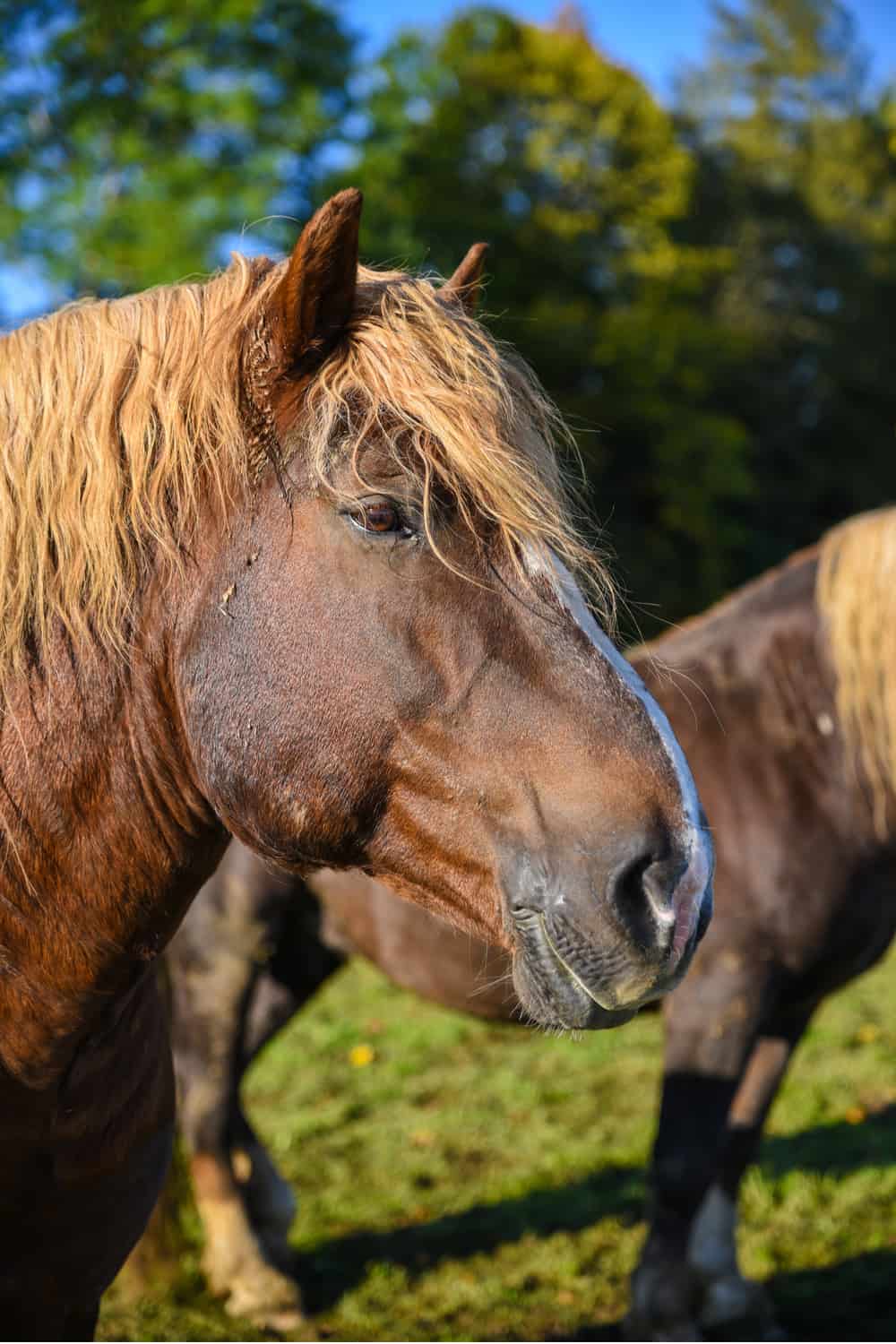 The South German Coldblood is a breed of horse mostly found in Bavaria in southern Germany. It is closely related to the Noriker horse of Austria, although the two breeds are considered distinct.

A particular characteristic of this breed is that it can display “leopard complex” patterns – it is one of the few horse breeds where this is possible. 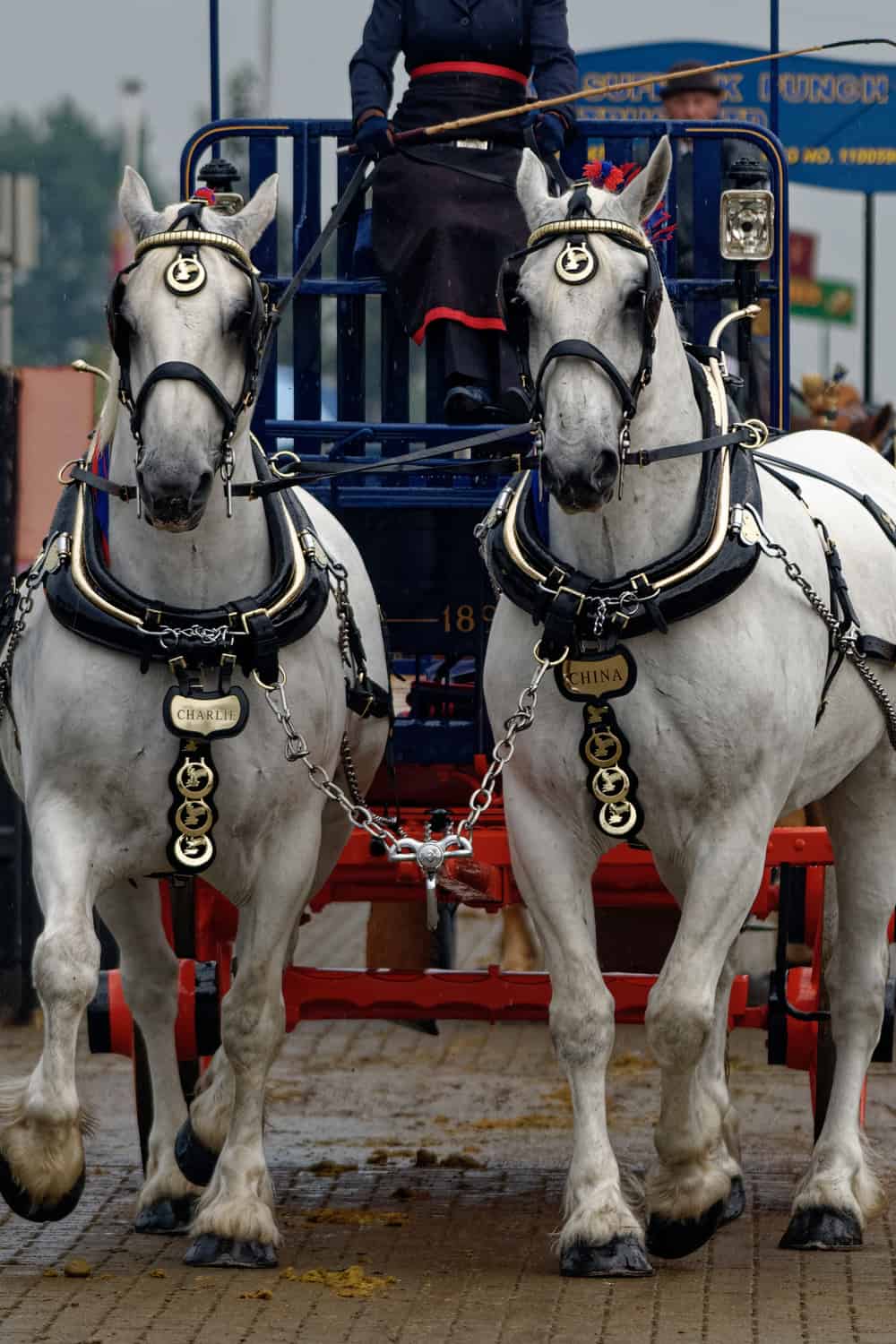 The Percheron is the most famous of the modern French draft horse breeds. It originated in the Huisne river valley in France, a region that was formally known as Perche, hence the horse’s name.

The ancestors of this breed were war horses. In the early 19th century, Arabian blood was added to the bloodline, after which, stallions from other parts of France were also brought in to increase the size of the breed, transforming it from a coach horse to a draft horse.

Before the Second World War, this breed was extremely popular in the US, accounting for 70% of all draft horses in the country. However, after the War, numbers declined due to the increased mechanization of agriculture and and the reduced need for working horses.

In France, Percherons stand at between 15.1 and 18.1 hands (155-185cm, 61-73in). They are usually gray or black in color, and even now, they are still used extensively as a workhorse. They are commonly used in competitions and are a popular horse in show jumping. In France, they are also reared for meat. 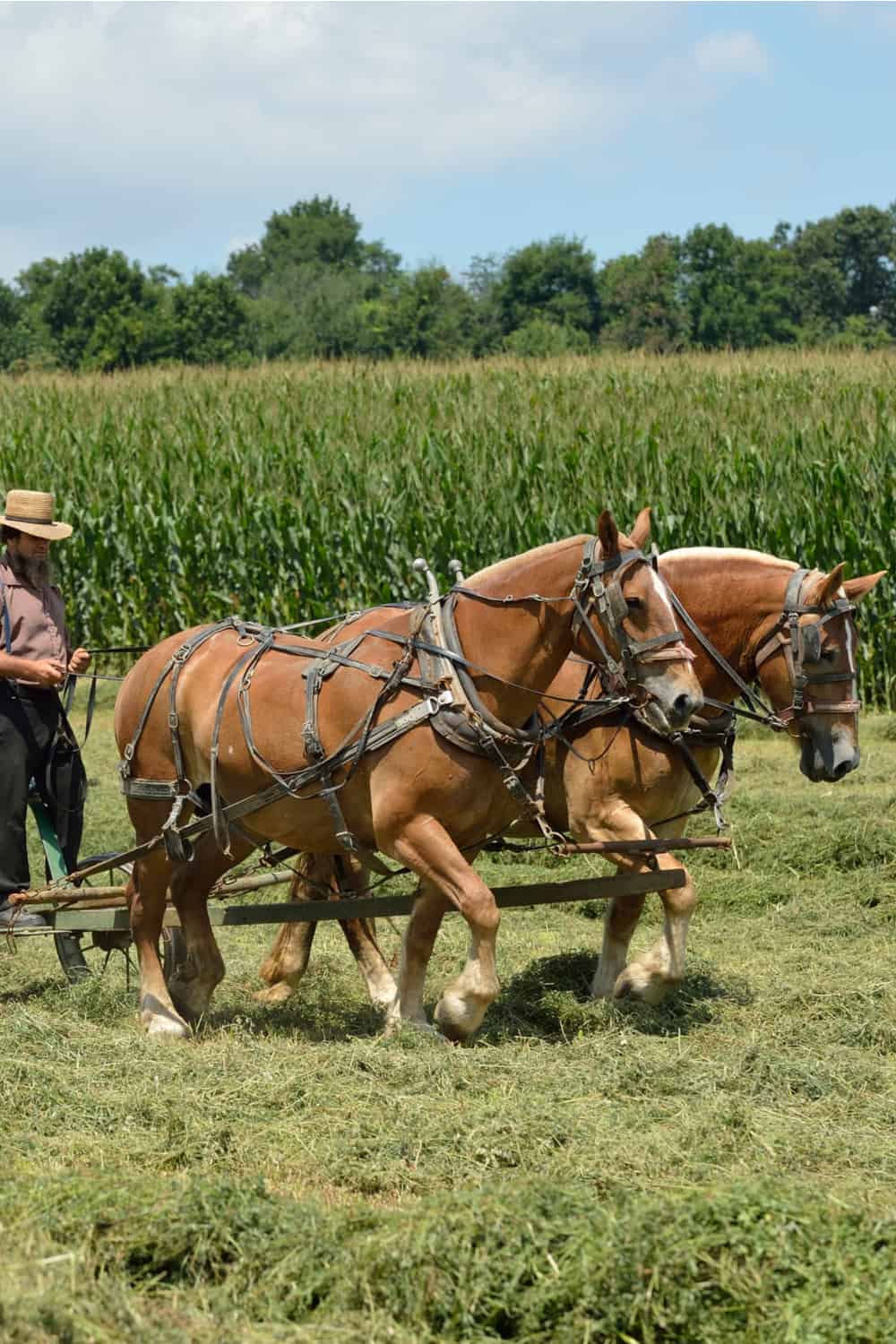 Along with the Shire, the Clydesdale and the Percheron, the Belgian was one of the four main breeds of draft horse in use in Europe at the start of the 20th century. It originated in the Brabant region of Belgium and is valued for its strength.

The name of this horse is slightly misleading. In the past, Brabant and Belgian horses were the same breed, and the names could be used interchangeably.

However, following the end of the Second World War, Belgian horses in the US and Brabant horses in Europe diverged – in the US, they were bred to be taller and lighter while the European horses were selected for strength and stockiness.

The result is that nowadays, they are seen as two separate breeds, and the breed referred to as “Belgian” is actually an American horse while the horse from Europe retains the name “Brabant”. In any case, the two breeds are very close and retain many similarities.

Nowadays, they are still used as working animals but are also commonly used as show horses or for pleasure riding. Their meat is also highly valued in certain areas, and the Brabant is often reared for meat. 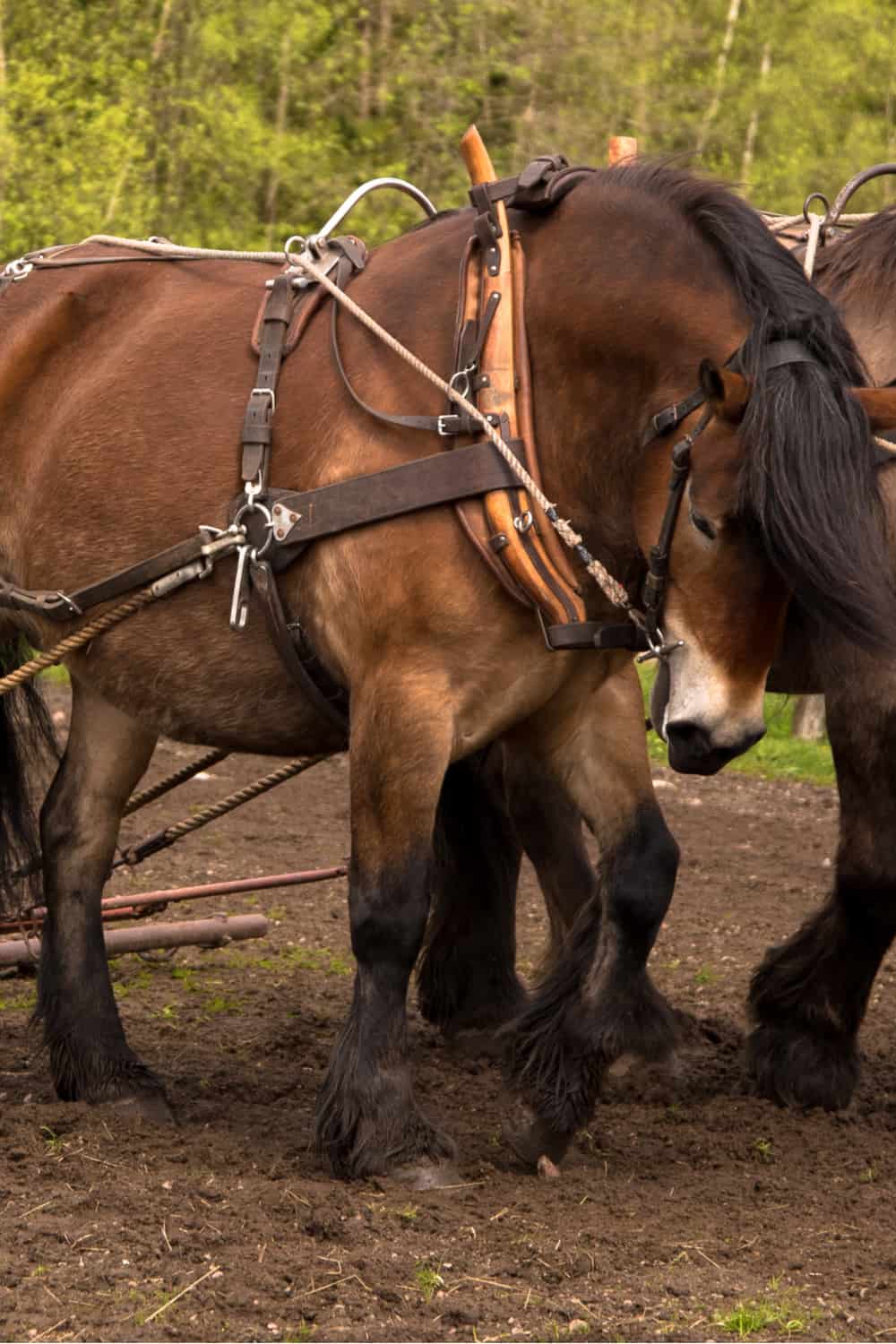 The North Swedish Horse is a small but strong and robust horse that was originally developed for forestry and agricultural work.

They are well known for their good character and their compliancy, and they are surprisingly powerful animals despite their diminutive size for a draft horse.

They are also valued for their good health, which helps them live long lives in the often-harsh climate of northern Europe.

As with practically all breeds of draft horse, there is less need for North Swedish Horses for agricultural work in the modern world. However, they are also commonly used for recreation and are one of the only coldblood horse breeds used for harness racing. 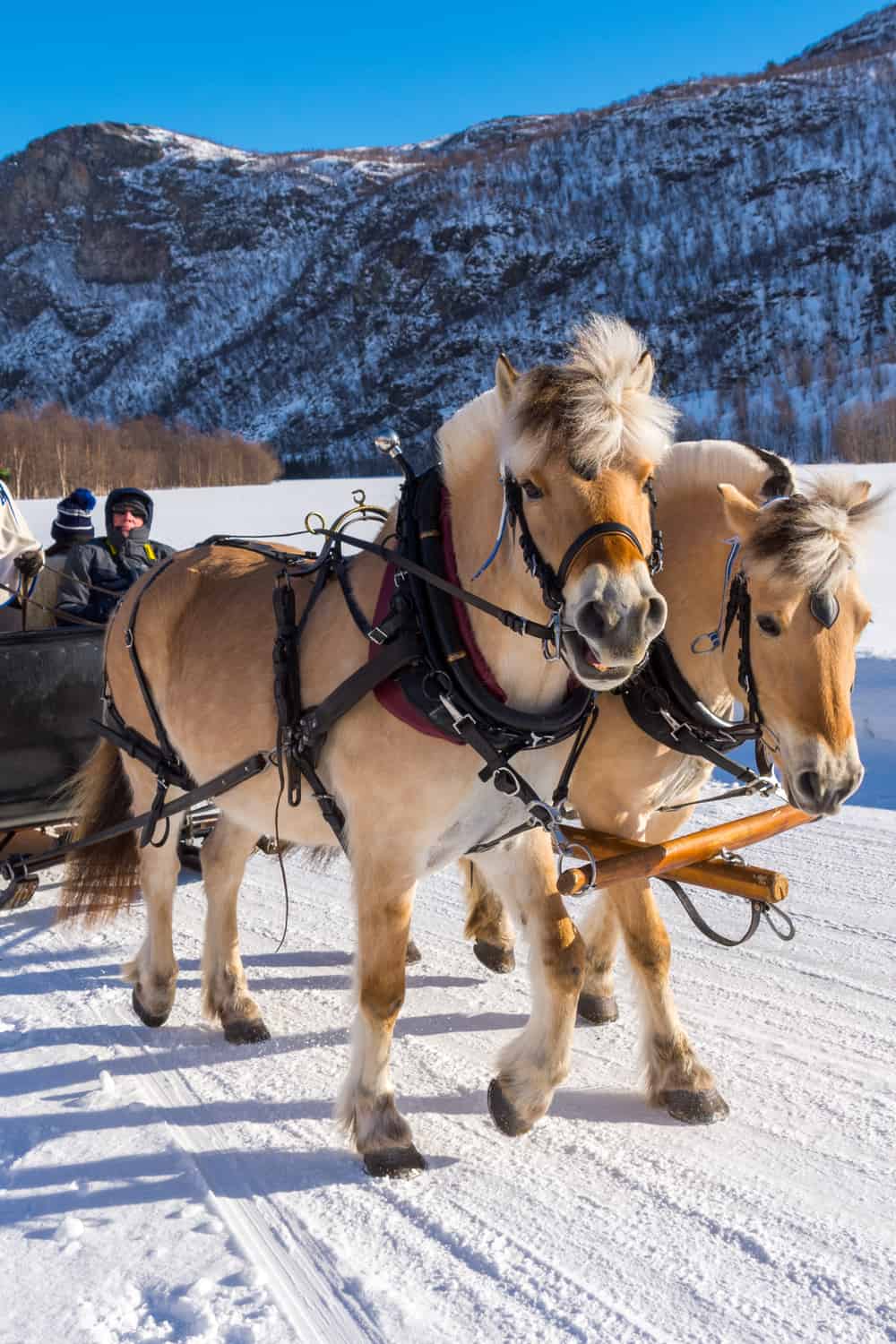 Another Scandinavian horse, the Fjord Horse is a Norwegian breed from the western region of the country. Thanks to its sure-footedness, it is a particularly useful breed in the mountainous part of Norway where it originated. It is a versatile animal and can also be used for a range of other purposes such as ploughing, pulling, driving and riding.

The Fjord Horse stands at only around 13.1-14.3 hands (135-150cm, 53-59in), but despite its modest stature, it is not lacking in strength. It is also generally willing to work and has a mild and amenable character.

Most Fjord Horses are brown dun in color, but four other colors are officially recognized. It naturally sports a long mane, although this is usually cut short to make grooming easier as well as to accentuate the musculature of the neck.

Interestingly, this breed is among the world’s oldest and is thought to be closely related to Przewalski’s Horse, a native of Central Asia that is considered to be possibly the world’s last surviving true wild horse. The Fjord Horse is another breed that was used by the Vikings as a war horse. 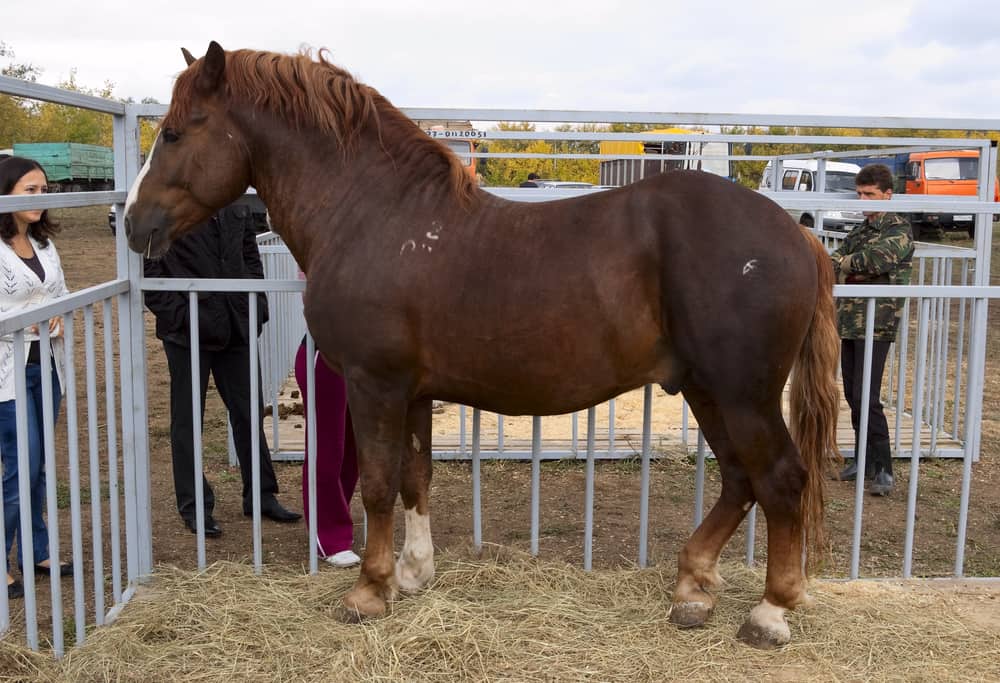 The Russian Heavy Draft is a relatively small yet surprisingly strong horse that was created in Russia in the latter part of the 19th century.

It was originally bred as a working horse for use in farming. However, now it is also kept for milk since mares are able to produce high quantities during each lactation period. Mare’s milk is an important element of the diet of various peoples across Central Asia. It is also reared for meat.

The American Cream Draft is interesting in that it is the only extant draft breed that was developed in the US. As the name suggests, it is usually a distinctive cream color, and it also displays amber eyes.

It was originally intended as an animal for farming, but as with many other breeds, the increasing mechanization of agriculture saw its numbers dwindle. Nowadays, this breed is increasingly rare – there are currently probably fewer than 2000 left in the world today.

Although far fewer horses are now needed for agricultural work, forestry, transport or any of the other traditional uses for draft horses, they are increasingly found in shows as well as being popular for leisure purposes.

This means the breeds remain and the bloodlines continue, allowing us to preserve these graceful, elegant and intelligent creatures and pass them on for future generations to appreciate and enjoy.