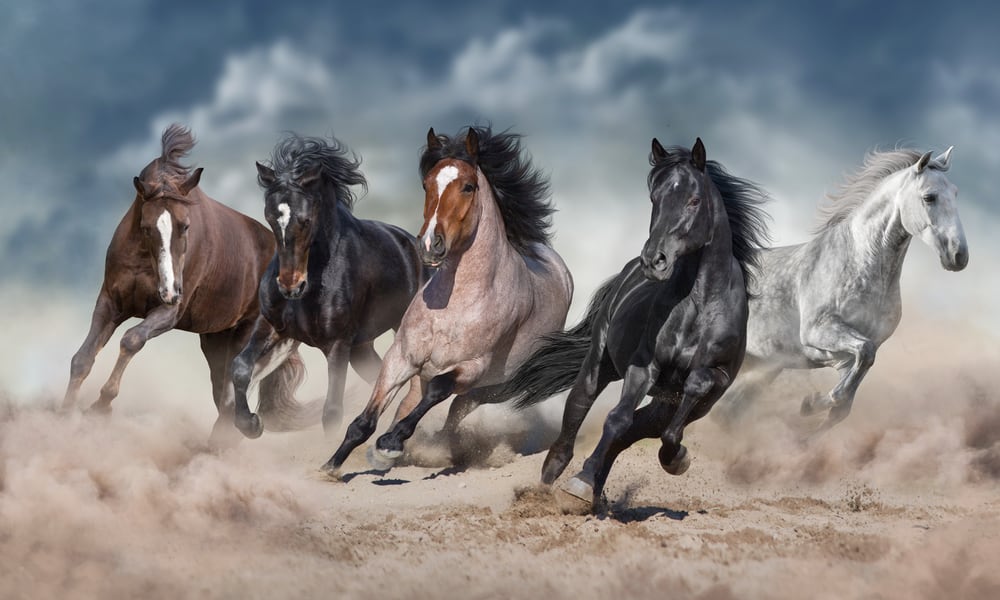 One of the oldest horse breeds in the world, the Arabians, have been on this planet for thousands of years. With time, they have been bred and adapted to different countries, giving rise to the different types of Arabian horses that we prize today.

What Is An Arabian Horse? 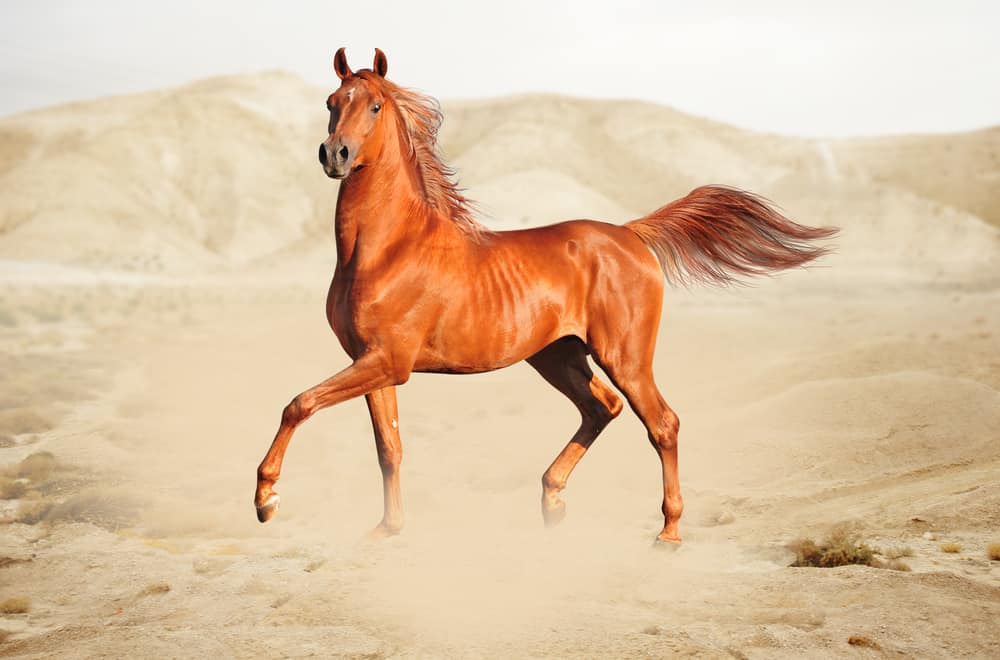 Arabian Horses originated from Arabian Peninsula and are renowned for their strength and endurance. They have distinctive head shapes, strong and dense bones, high tail carriage, and great hoof walls.

This breed of horses is known for superiority in equine athletics. Over the centuries, their breeding programs have been more focused on preserving their natural traits rather than modifying them. So, it would be fair to say that Arabian Horses have remained almost the same throughout the centuries.

Arabian Horses have a maximum height of around 152 cm and can weigh up to a thousand pounds. They have impeccably adapted to the demands of the times, and thus, beneath their fine and stunning appearance, you can notice a lot of tough and resilient traits in them. These gorgeous horses are also often seen glamorized in movies.

Through wars and trades, Arabian horses have spread to many parts of the world, where they have adapted diversely, giving rise to modern-day Arabian horses types. Taking note of their superior characteristics, breeders have also used Arabians to create superior quality horse breeds, such as Thoroughbreds. 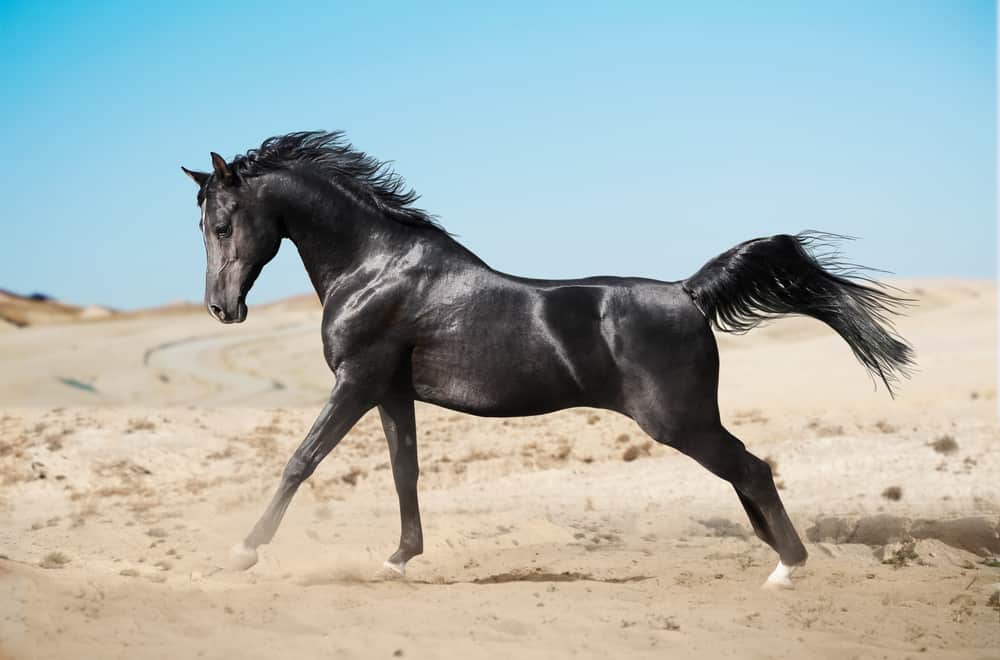 Arabian horses were treaded to Egypt to fulfill Egyptian Elite’s desire to own purebred desert horses. It was during the 20th-century Egyptian horse breeders started preserving this Egyptian Arabian breed, also known as Straight Egyptian.

Egyptian Arabians make up only 2% of Arabian horses, i.e., this type is quite rare. These Arabians are also considered purest of all types as they were never interbred with the other types of Arabians.

With height ranging from around 14.2 hands to 15.2 hands, Egyptian Arabians tend to be smaller than the remaining types of Arabians. They have a dished face and a high tail carriage and are considered a glamorous and elegant Arabian type. 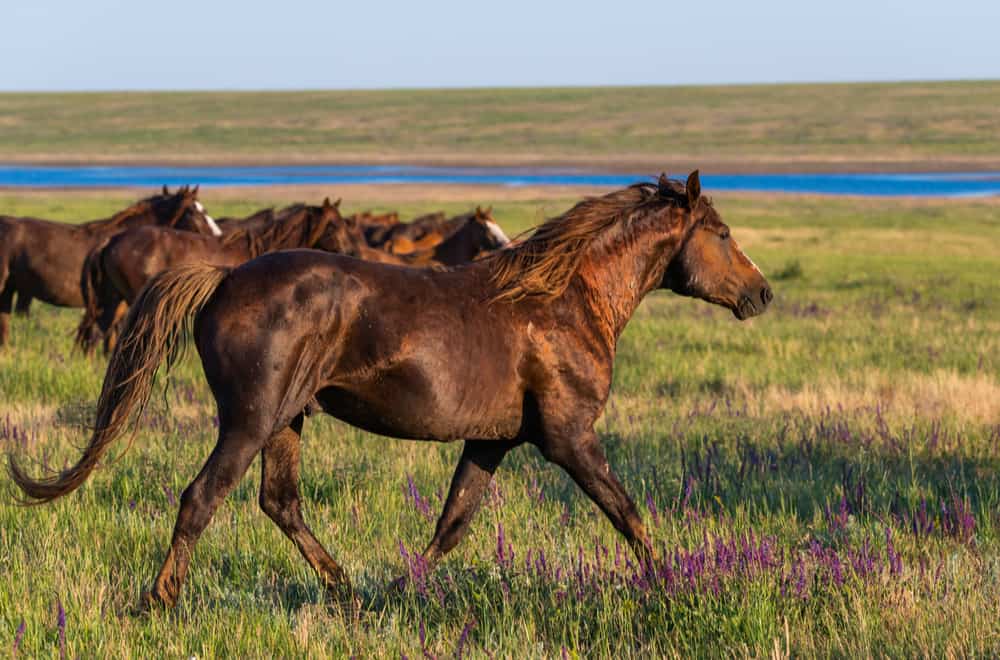 Russian Czars and elites were appreciative of the Arabian horses when first introduced. Around the 17th century, this infatuation resulted in a new breeding program taking place, resulting in what we call today Russian Arabians.

Many different bloodlines, including Crabbet and Polish, were interbred to give rise to the Russian Arabian bloodline.

To name a few notable Russian breeders, Count Orlove and Prince Sherbatov are said to have played a major role in the development of Russian Arabians. Most of these breeds of horses are around 15 hands in height with stunning dark brown coat color.

Russian Arabians are famous for their stamina and athletic traits. They often dominate many equine sports. Given their calm nature and gentle personality, Russian Arabians make amazing family horses. 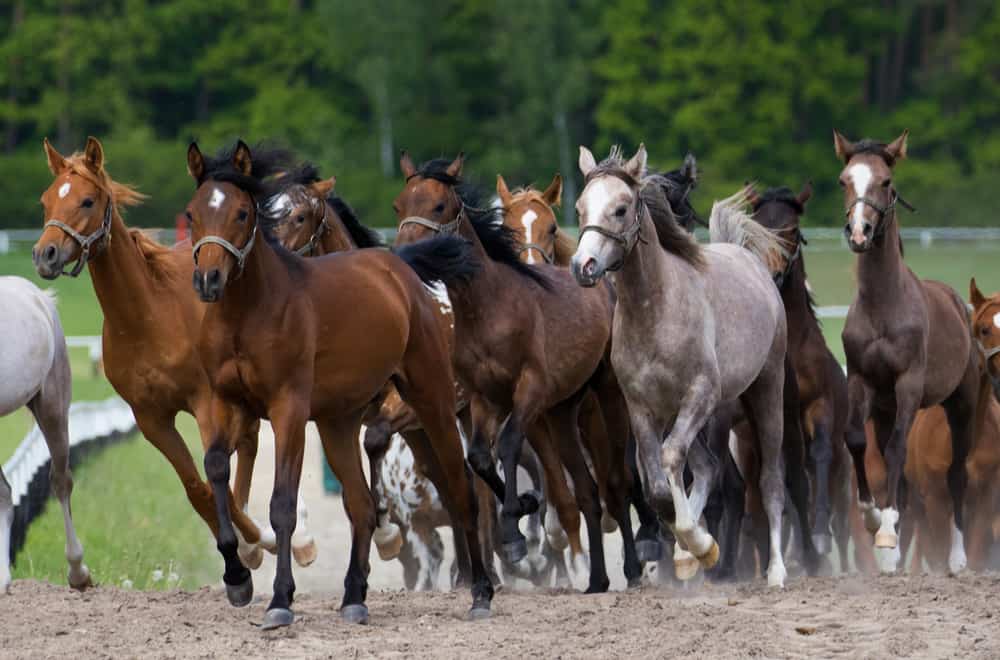 Polish captured many Arabians from the invaders during the mid-16th century. They admired these horses so much that they soon started a breeding program that led to the development of Polish Arabians.

With time, the Polish Arabian bloodlines split into two more subtypes; the Kuhailan and the Seglawi. Seglawi Polish Arabians, famous for their beauty, are prized by many, including many Americans.

Polish Arabians have elegantly arched necks, muscular bodies, high set tails, and small hooves. They stand around 14.2 to 15 hands tall and come in a variety of coat colors, including brown, white, and grey. These horses are tough, beautiful, and super athletic, true to the Arabians.

These Poland-derived Arabian horses are used in cavalry, competitions, farms, and for recreational riding as well. 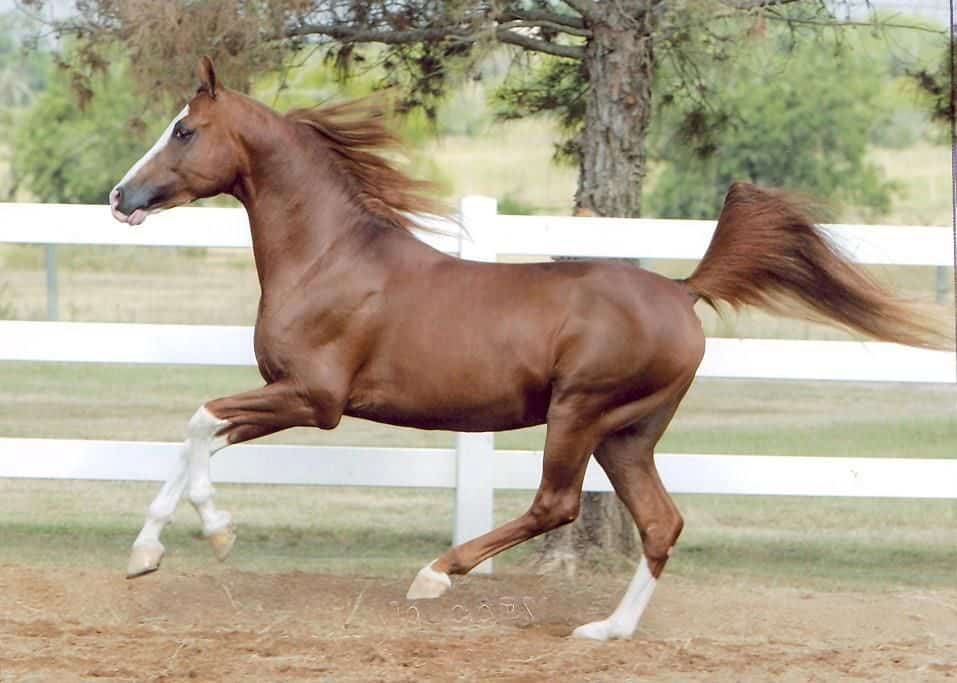 Crabbet Arabian originated around the late 18th century from Crabbet, England. Lady Anne Blunt and her husband imported high-quality Arabians from Egypt and bred them, keeping their height in mind. In fact, Crabbet Arabian horses are the tallest amongst the Arabians, with a height of around 14.5 to 15.2 hands.

Crabbet Arabians come in brown, white, grey, and chestnut colors. They are versatile and display a cheerful temperament. They also have fantastic competing abilities and are often used in races. They are also used for showjumping and recreational riding. 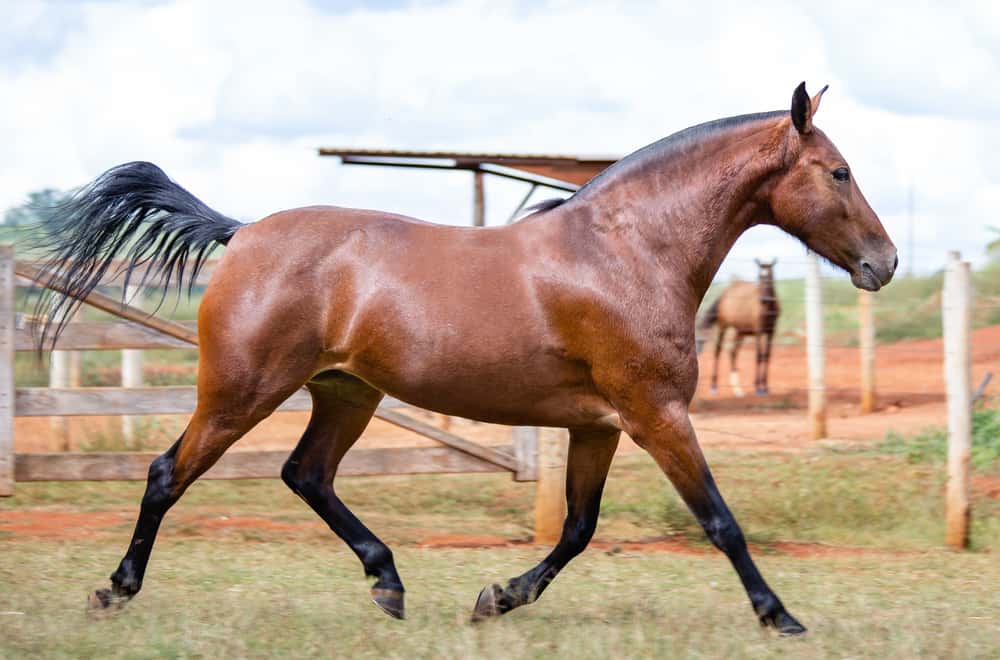 Making up less than 1% of the Arabian horses existing today, Spanish Arabians are the rarest of all. In Spain, the military was in charge of horse breeding programs.

Spanish Arabians are strong with strong and sturdy bodies and come mostly in white and grey body colors. They stand around 15.5 to 15 hands tall and have curved tails and short necks. Moreover, these horses are super athletic and, thus, are popular in the equine sports community.

Versatility, obedience, and calm temperament are some of the fantastic traits that Spanish Arabians display. Given these impeccable traits, Spanish Arabians are considered one of the great choices for breeding purposes. 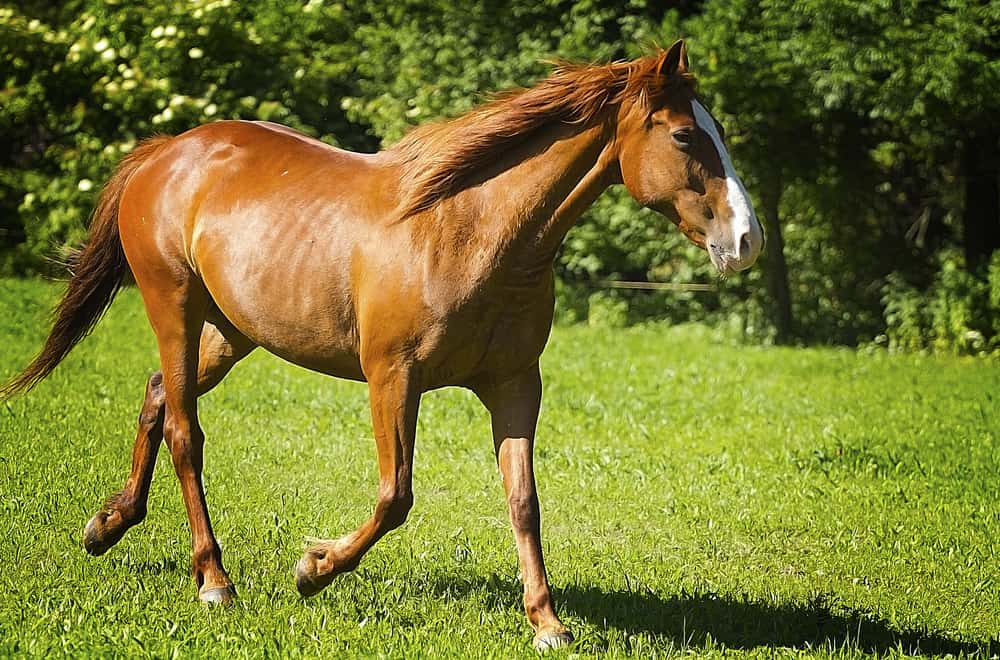 Shagya Arabians are the least pure among all the Arabian types with the parentage of modern riding breeds and Arabian stocks.

The Hungarian military developed this type of Arabians in 1789. Their major objective was to develop a cavalry horse with all the Arabian traits, but larger and stronger in order to carry more weight and pull carts and carriages. They also sought a fantastic jumping ability in the resulting breed.

Shagya Arabians have strong, sturdy bodies and have high endurance. Yet, they look elegant and have friendly personalities. The most common uses of these horses are for work and riding purposes. 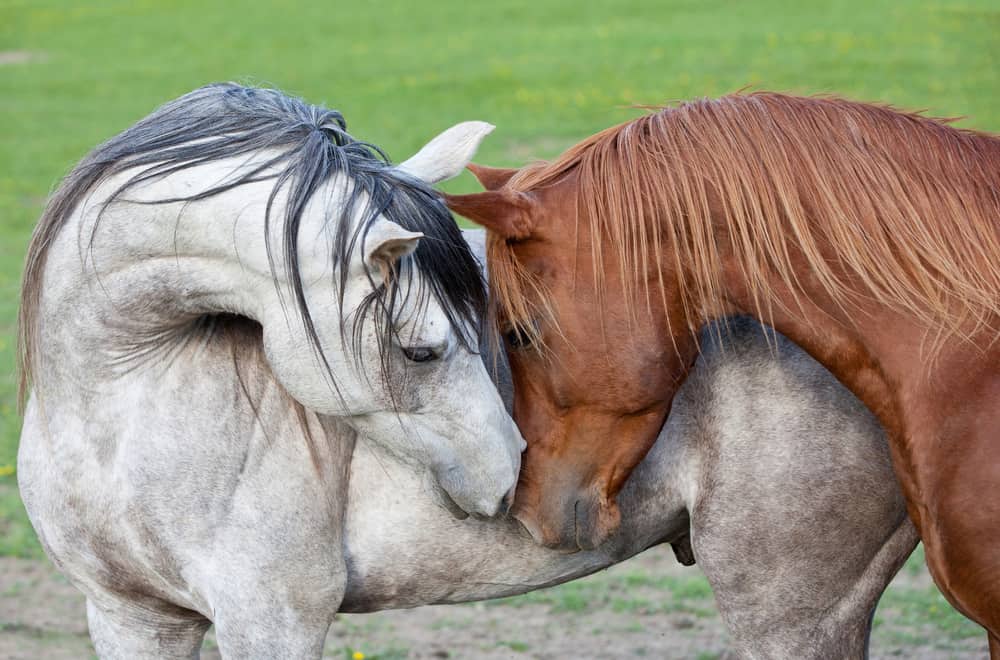 To those who are confused about the ‘type’ and ‘strains’ of Arabians, a strain is a smaller group of horses within a breed that originated from a common ancestor. On the other hand, types are larger groups of horses bred in different countries and in different environmental conditions.

Now that we have elaborated on six types of Arabians let’s discuss their strains and their characteristics.

The Keheilans have deep chests and shorter heads. Standing around 15 hands tall, these Arabian strains are slightly larger in size. They also possess wide jaws and often come in grey and chestnut coat colors.

The Abeyans are around 14.2 hands high and come with unique coat colors, often with a greyish undertone and sprayed white. They have relatively high tails and longer backs than the rest of the Arabian strains.

The Hadban are athletic Arabian strains with healthy and muscular bodies. They have flat faces and come in brown and bay coat colors that are sometimes accompanied by white markings. They stand around 14.3 hands tall.

The Seglawi horses are prized for their feminine beauty. They have long faces with chiseled bone structures. These horses are relatively shorter, with around 14.2 hands of height, and come in bay colors.

These strains of horses are athletic with large bones and muscular bodies. They are relatively larger in height, i.e., around 15.2 hands. They have flat faces, and the coat colors are typically grey or bay. 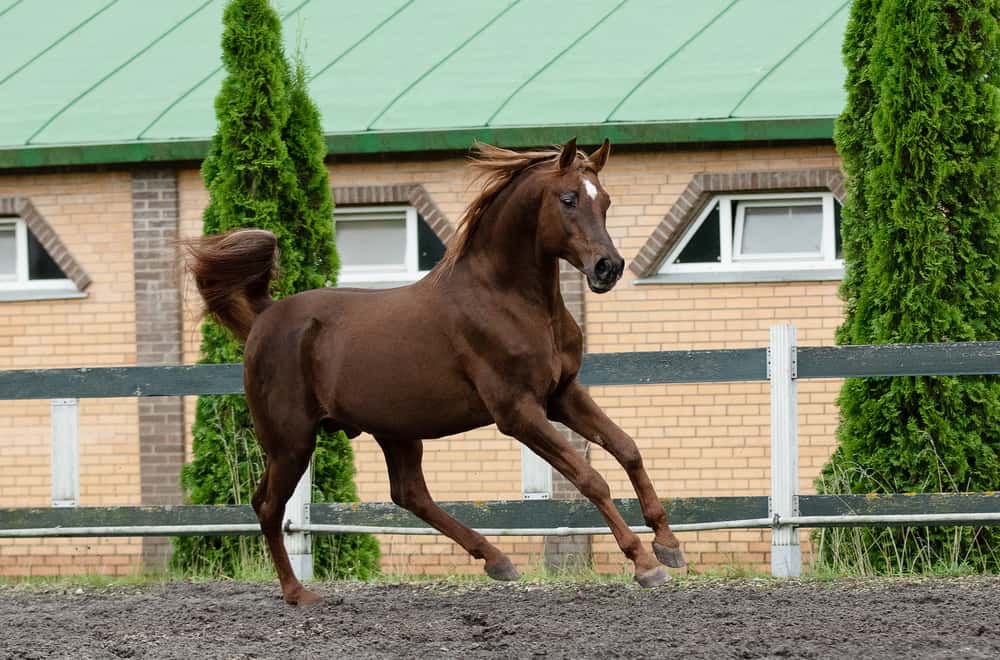 In short, Arabian horses are not only elegant to look at and friendly to bond with, but they are also the third-fastest horse breed extant today and can speed up to 40 miles per hour.

With that, it wouldn’t be an exaggeration if we say that the Arabians are one of the best horses for endurance racing. In fact, these horses are bred for endurance and speed. They were often used as cavalry horses in the wars.

We hope to have cleared all your doubts and confusions regarding Arabians, their types, and strains.

If you are an equine sports fanatic, or if you just love horses in general, let us know which breed is your favorite. And if you like Arabians, share what trait infatuates you the most towards these horses. It would be fun to interact! 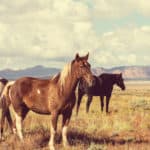