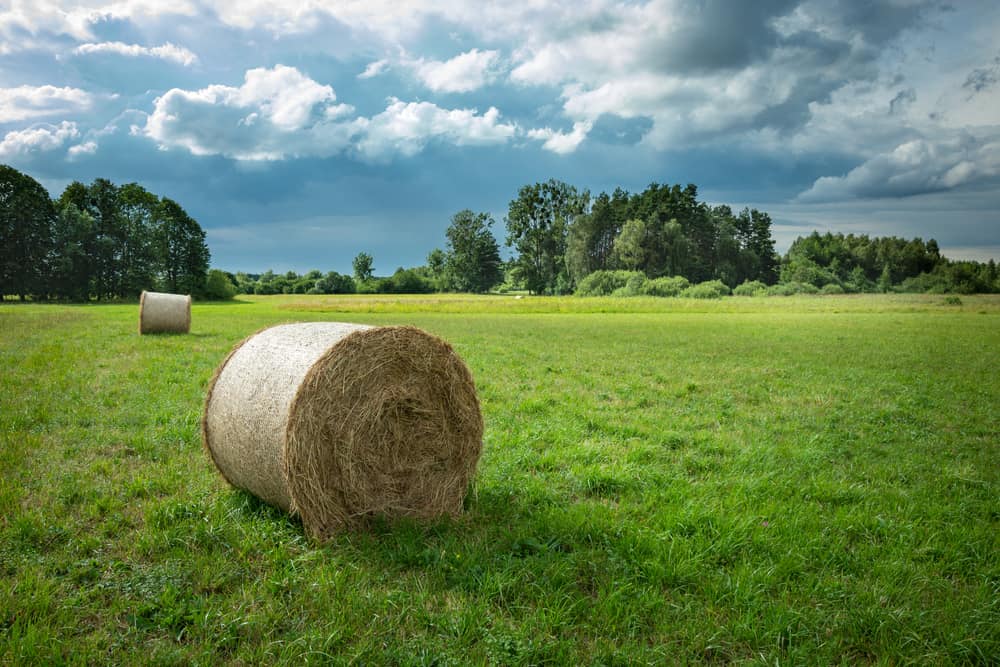 Farmers usually use the grazing pastures benefits as a typical diet for their animals. However, it depends on the weather and seasons. Changing weather conditions and cold weather will force your animals to go inside warm stables. As a result, their diet will change, so you should feed animals with hay instead of fresh grass.

In such a situation, it is necessary to provide a sufficient hay amount to feed animals in winter. For that, you need to know how much does a bale of hay weighs. Only that way can you estimate how many hay bales will be necessary to feed your animals throughout the cold period and which hay storage area size to provide. 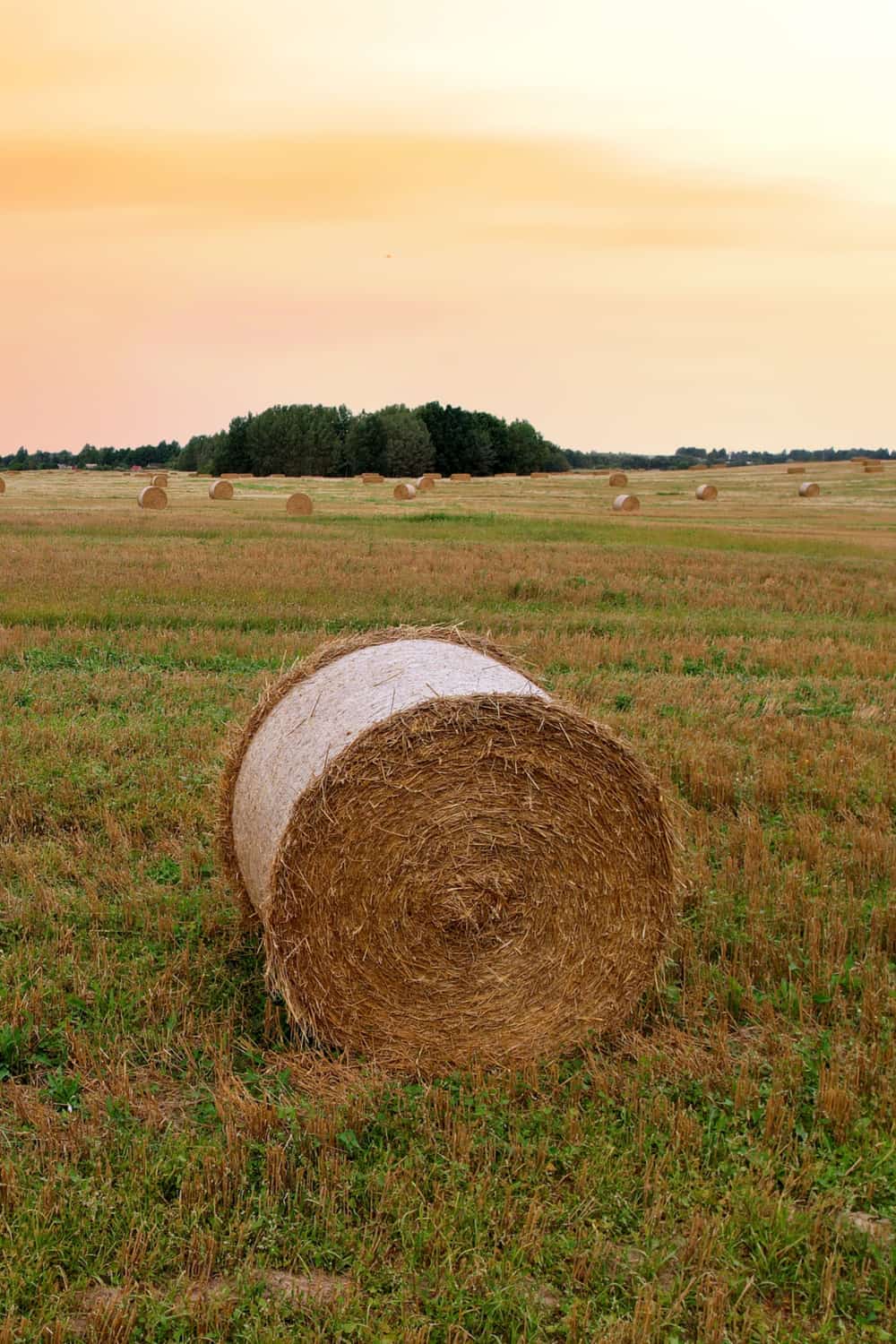 Hay is dried and mowed grass, legumes, and other herbaceous plants you can use to feed grazing animals, like:

These animals are ruminants, and their digestive system is excellent at processing plant materials. However, some plant parts are heavier to digest than others. For instance, the soft green leafy parts of the plant are much easier to digest.

Therefore, you need to pay attention to how fast the grass grows and mow it before it becomes hard and too tall.

The best option is to bale the hay after mowing to make it easier to transport and store. You can use wire, twine, plastic wrap, or net to hold bales together.

They can be of different sizes and shapes but are typically round or rectangular. You can choose the shape and size of the bale as you see fit, based on the needs and storage space available to you. 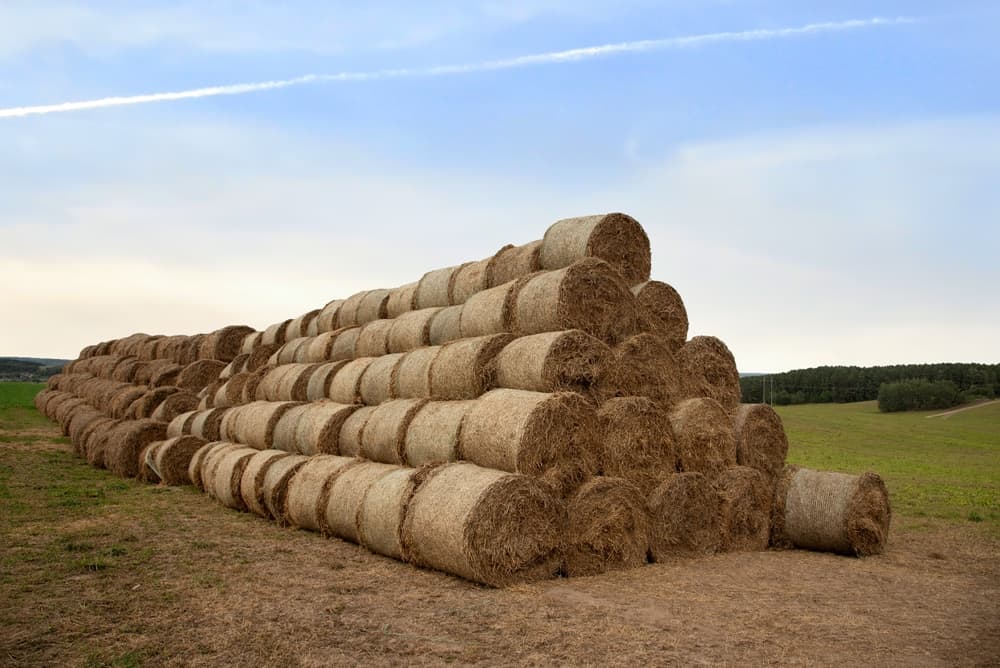 You can use different hay categories to feed your livestock, like:

This hay category has low protein, amino acids, and lysine levels but is rich in fiber. It includes:

Timothy grass is best mowed before flowering because it has the most nutrients in that period. The best option is to cut Bermuda grass approximately 4 to 5 times a year.

This hay type is rich in vitamin A, calcium, and valuable nutrients. This category involves:

Alfalfa is the most popular legume and is extremely widespread throughout the US. Although it is similar to grass due to its long fiber, it is almost three times richer in calcium and twice as rich in protein. It is ideal for feeding both working and young animals.

Oat and fodder hay are so-called cereal hays. It is best to mow these plants while still green to make animals digest them more efficiently.

This mixture is the best option for animals to get a balanced and healthy diet. The grass is rich in fiber, and legumes are rich in nutrients, calcium, and vitamin A. 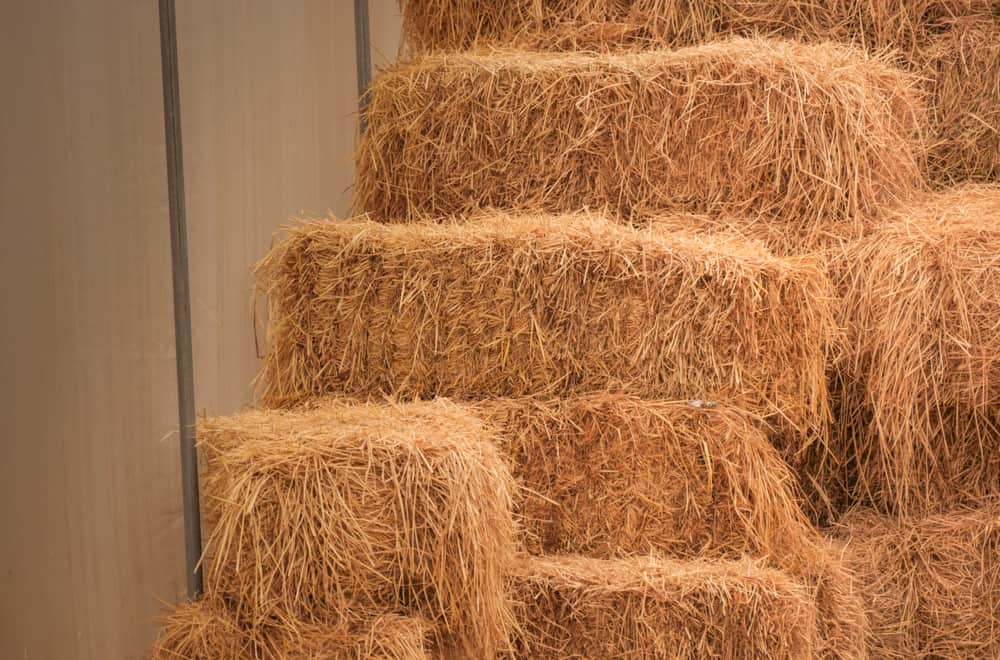 The hay bale weight varies depending on the density and size. The baler packs hay in bales of particular dimensions without precisely determining their weight. Basically, the hay’s moisture percentage and plant types will directly affect weight.

For instance, a timothy hay bale is about 15% lighter than an alfalfa bale. The acceptable moisture percentage for square hay bales is about 22%, while the moisture of approximately 18% is suitable for round bales.

However, you should be careful! The too high moisture content of the hay bale will allow the fast growth of microorganisms inside it. That will create additional heat and lead to spontaneous combustion over time.

Since they started appearing 40 years ago, round bales have become the most popular type among farmers. The biggest reason is more effortless handling and transport over shorter distances.

Loading these bales is quicker with the help of a tractor with a special attachment with spikes. Remember that short-distance transport involves special wagons or trailers.

However, their long-distance transportation is not that simple. Round bales are difficult to secure due to their shape, so they often fall off trucks and cause traffic accidents.

Small square bales have been in use for more than a century. They are popular wherever smaller hay amounts are needed. You can recognize three types of small square hay bales, including:

Two string small square hay bales –This bale type has been present for many years. They are easy to use and don’t require any special handling equipment. You can buy them on local farms or in building material stores.

Three string small square hay bales – These bales’ weight is twice the two string bales’ weight because they are denser and slightly larger. The best thing is that one or two people can handle them without specific equipment.

This bale type is suitable for long-distance transport because its density reduces transport costs. Plus, it is easier to ensure transport safety.

High-density small square hay bales – Such a bale requires a bale press or a bale compression system. This press compacts hay from ordinary bales until getting two to three times heavier bales than usual ones of the same size. It is a huge advantage when it comes to storage and transportation.

Large square hay bales have existed for about 40 years. They are ideal for storage because they are easy to stack and are also suitable for transport. However, it is necessary to use forklifts for loading and storage due to their size. 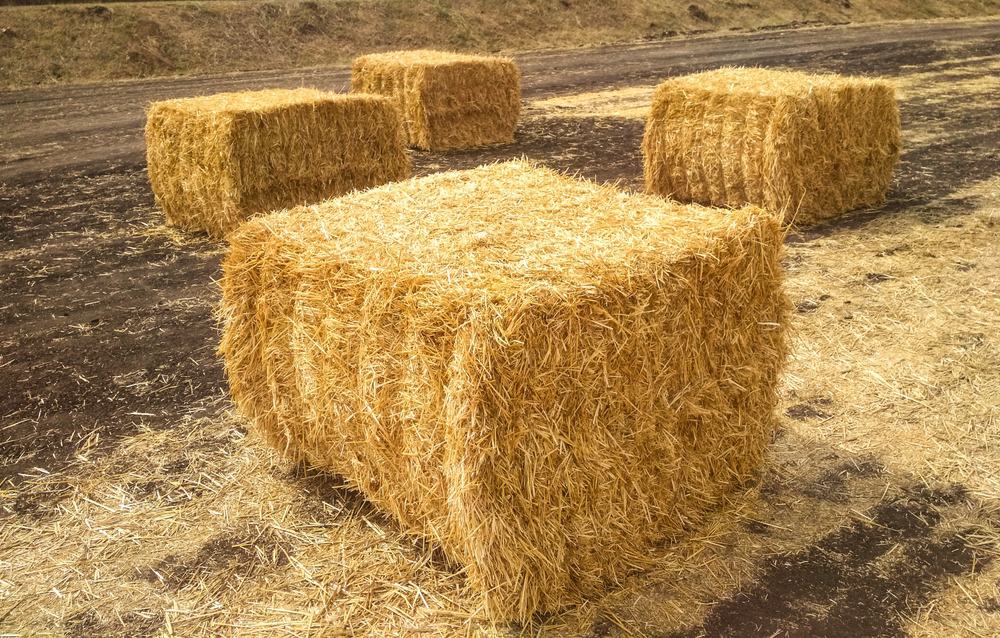 When planning to purchase hay for your animals, in addition to weight, you need to know the hay bale price. The price is affected by several factors.

The most important factor influencing the price is the plant’s type in the hay bale. Interestingly, although alfalfa hay is excellent and most popular, timothy hay is still the most expensive. Bermudagrass hay is not so popular, and you can get it at the most affordable price.

Hay quality is essential for animal nutrition. Since grades from 1 to 3 determine its quality, you should know that the 1st-grade hay means the best quality. On the other hand, the 3rd-grade is for hay of the lowest quality.

There is no official standard for assessing hay quality, but the following characteristics determine the grade height:

Most farmers look for hay high in protein that provides a lot of calories and energy for the animals.

The type of hay plants affects the price you will pay for a bale. Timothy and bermudagrass hay are grass hays, while alfalfa is a legume and this hay is richer in protein.

Timothy hay will cost you $20 to $22 per bale, depending on the manufacturer. The bermudagrass hay price is more affordable, ranging from $8.75 to $15 per bale, although they are in a similar category. The alfalfa bale price is even, from $19.95 to $20.

Another factor that significantly affects the hay price is the season or the mowing hay time. During the season, the price you will pay for a bale of hay is much lower than out of mowing season. In other words, you will spend two to three times more money for the same quality hay bale offseason.

Many factors affect the hay bale weight. For instance, hay bale coming directly from the field is thicker and heavier because it contains more moisture. Mature hay has more stems than leaves, so the hay bale is lighter and not so dense.