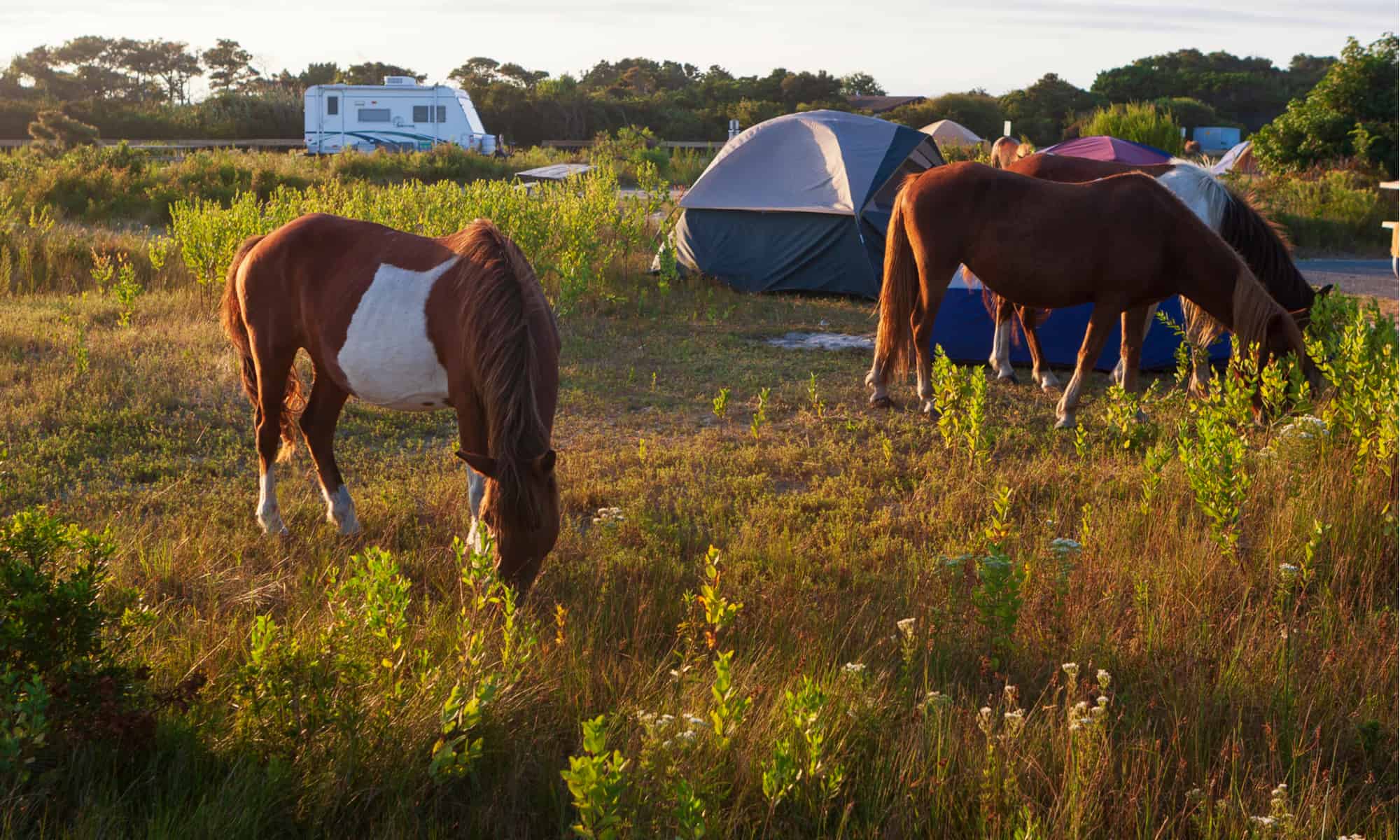 The Guinness book of world record reports a thoroughbred’s top speed to be a remarkable 44 miles an hour. That’s similar to a normal car moving at 70 Km per hour. Surprisingly, this is just a tip of the many fascinating facts about the State Horse of Maryland.

The State Horse of Maryland is a renowned racehorse. Its remarkable speed, endurance, and flexibility make it a super athlete, fit for various equine activities.

Are you looking for a racing horse that performs both track and off-track events? Watch out for the thoroughbred. Herein, you’ll find tons of information on its origin, remarkable features, approved coat colors, and answers to some frequently asked questions about the racer.

What is Maryland’s Official State Horse?

The iconic thoroughbred is the official state horse in Maryland. The horse was adopted in 2003 and designated as Maryland’s state horse under section 13-318 of the Maryland Statutes.

It traces its roots to more than three centuries ago when three major stallions were imported from the Middle East. Since then, the thoroughbred has been the most celebrated horse breed in Maryland.

Origin of the Thoroughbred 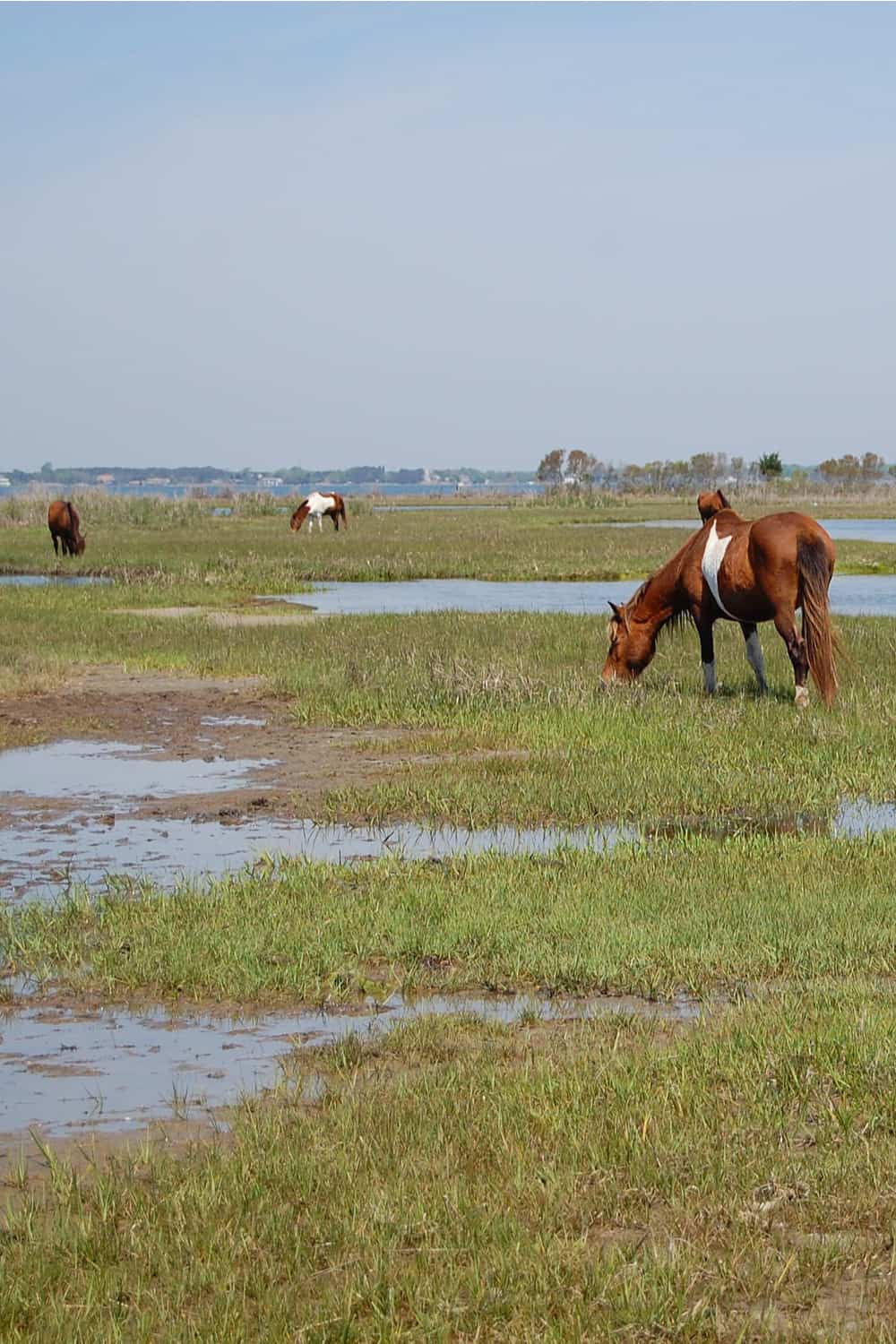 If you thought thoroughbreds were born in Maryland, you’re probably wrong. Remarkably, they all trace their origin to a trio of stallions dubbed ‘The Foundation Stallions’. The trio includes:

Byerly was initially ridden by a Turkish militant in 1688. Unfortunately, the Turkish rider was captured by Sixth Dragoon Guards in a conquest led by Robert Byerly, an army captain. The horse was confiscated and named after captain Byerly who then used it in various battles.

Byerly Turk was a dark brown horse from Arabia. Similarly, most of his offspring were either black or brown. Byerly’s most notable offspring was Partner who became an influential and celebrated runner. To date, thoroughbred champions are linked to his racing prowess.

A British trader-Thomas Darley bought his favorite horse from the Syrian Desert. During his business trips, he spotted Darley in a herd of similar horse breeds.

He had always wanted a colt with an Arabian bloodline since they were praised for speed and endurance.

He negotiated the price and bought the colt in exchange for gold. Unknown to him, the Darley Arabian colt would later produce remarkable racing studs. This includes Bulle Rocke, America’s first-ever thoroughbred.

Godolphin was born in Yemen and presented to the king of France as a gift. Upon his arrival in France, he appeared starved and weary, yet still considered beautiful. His weariness was only attributed to the long miles he covered from Yemen to France.

One of Godolphin’s offspring was Lath who was considered the best horse of all time. He surpassed his father’s success and produced more offspring who became excellent racers.

His daughter, Selima first set foot in the US in 1752. She later gave birth to the pedigree class of thoroughbred racers in America.

Renowned Features of the Thoroughbred 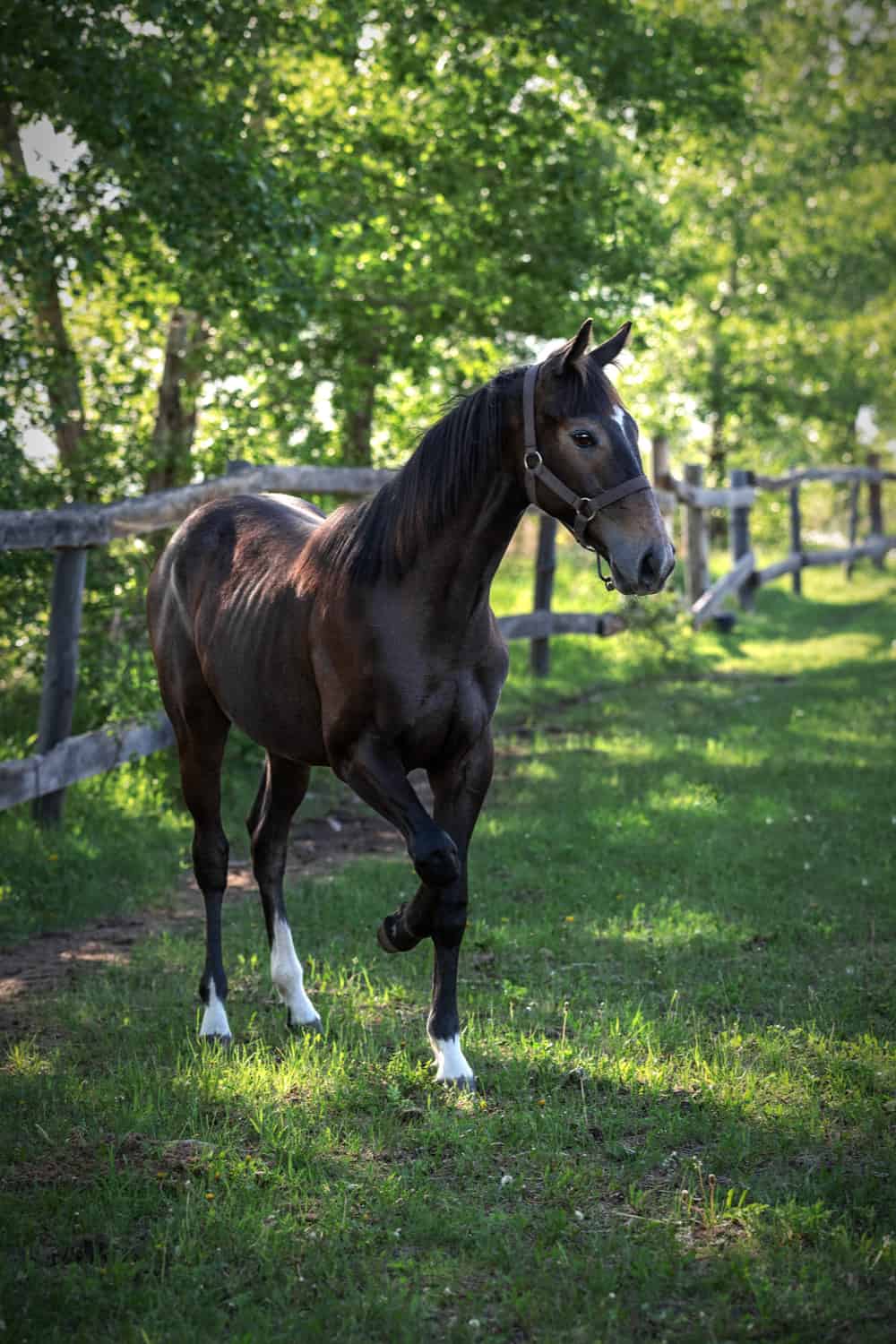 Thoroughbreds are not your usual type of horse. They are swift racers with impeccable physical and mental attributes. Below are some of the best features that set them apart from other horses:

Their shoulders have a deep slope that connects to a broad chest. Additionally, their powerful, hind leg muscles give them a sure boost during a race.

Thoroughbred horses also exhibit a smooth, curved back, lean muscles, long legs, and small feet. These together with its body muscles make the horse an elegant and powerful racing beast.

Thoroughbreds stand tall, hitting a record 1.5-1.7 meters high. On average, this is equivalent to 16 hands joined upwards. Because of this, they have such strong agility as their height enables them to make long strides.

If you don’t anticipate trouble with an unruly pet horse, then the Maryland state horse is your sure choice. The breed has a friendly temperament, is sensitive in nature, and has an unrivaled work ethic.

It is classified as a hot-blooded horse due to its boldness, speed, and agility. If you are an experienced rider, you’ve got little to worry about your horse’s performance.

Naturally, the horse is a fast learner, hence easy to train, as it will easily master your subtle movements and cues. The thoroughbred always wants to win and achieve perfection.

As long as it understands your instructions, it will go out of its way to help you achieve your goal.

Distinct Colors of the State Horse 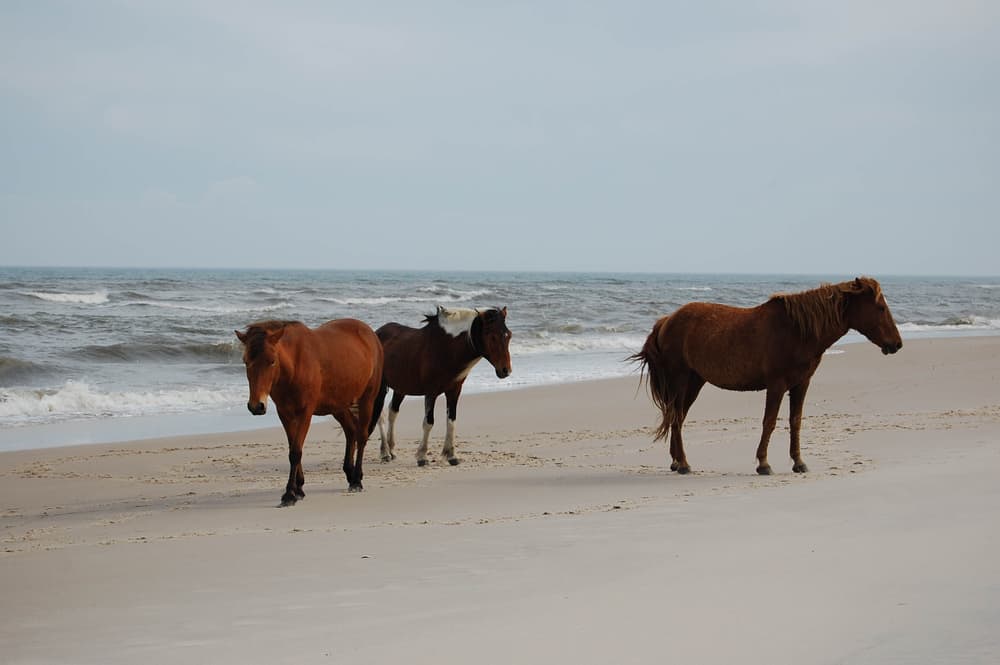 The Maryland State horse is a distinct horse breed available in different colors. The most common shades include gray, black, chestnut, brown, bay, and dark bay. Some have white spots on the face and lower legs.

Still, some thoroughbreds such as Pinto may have more than one color on their coats. Other less dominant colors of the thoroughbred are Palomino and Roan.

When you watch thoroughbreds in a race, you’ll likely spot various shades of colors on the racing track. Certainly, many horse riders and enthusiasts select their favorite horses based on color.

However, the American Jockey Club has set standards for color registration. As a result, not all colors are recognized for registration. Below are the only approved colors for the registration of a thoroughbred horse.

Bay is considered the standard thoroughbred color. Similar to the bay horse, a bay thoroughbred has a reddish-brown coat and small shades of dark tan on the head and shoulders. All the points; the lower legs, tail, mane, and ear edges are black in color.

Bay horses exist in different colors ranging from creamy white to dark mahogany. Dark bays may sometimes be mistaken for liver chestnuts. However, a liver chestnut doesn’t have black points.

Some bay thoroughbreds have featured and won in prominent horse tracks before. These include Seabiscuit in the 1930s, Northern Dancer in the 20th century, and Big Brown who became a three-year-old champion in 2008.

The Chestnut is one of the most common colors of thoroughbred horses. They have varying shades although their genetic composition remains the same. Chestnuts range from red-yellow to golden yellow, with red hair all over the body.

Their tails and mane may appear darker than the coat. Some chestnuts also have white lower feet.

Chestnuts have also made remarkable appearances in horse races. Incredibly, Sir Barton, a chestnut colt, was the first horse to win the Triple Crown championship in 1919. Other chestnut winners include Omaha in the 1930s, Assault in the 1940s, and Justify in 2018.

Black thoroughbreds have an entire black coat without any white marking. In addition, these rare breeds have dark brown eyes, with no reddish or brown hair.

To achieve this, the horse must have at least one dominant ‘E’ allele gene and two non-functional copies of the ‘a’ allele gene.

Because they are rare, black thoroughbreds seldom feature in horse tracks.

Like their black counterparts, the White thoroughbreds are a rare gem. However, their dazzling beauty makes them the preferred symbol of power and fame. A horse may be registered by the Jockey Club as a white thoroughbred if its entire coat and points are all white.

Similar to the black thoroughbred, the white variation rarely steps on the racing track. Yuki-Chan and White Beauty are the only notable white racers.

Gray horses exhibit a mixture of black skin and white or black hair. To register at the Jockey Club, your gray thoroughbred should have black and white hair on its coat. It should also have gray or black points without traces of white markings.

The Palomino is another rare gem of thoroughbred horses. It features a golden yellow coat and a flaxen tail or mane. The coat color can as well range from creamy to dark gold.

A Palomino consists of a chestnut base gene and another gene of a creamy dilution.

If you’re lucky to have a Palomino racer, you wouldn’t put it on the track for fear of an injury. The Palomino is delicate, yet costly when sold as a novelty.

The Value of Maryland’s State Horse 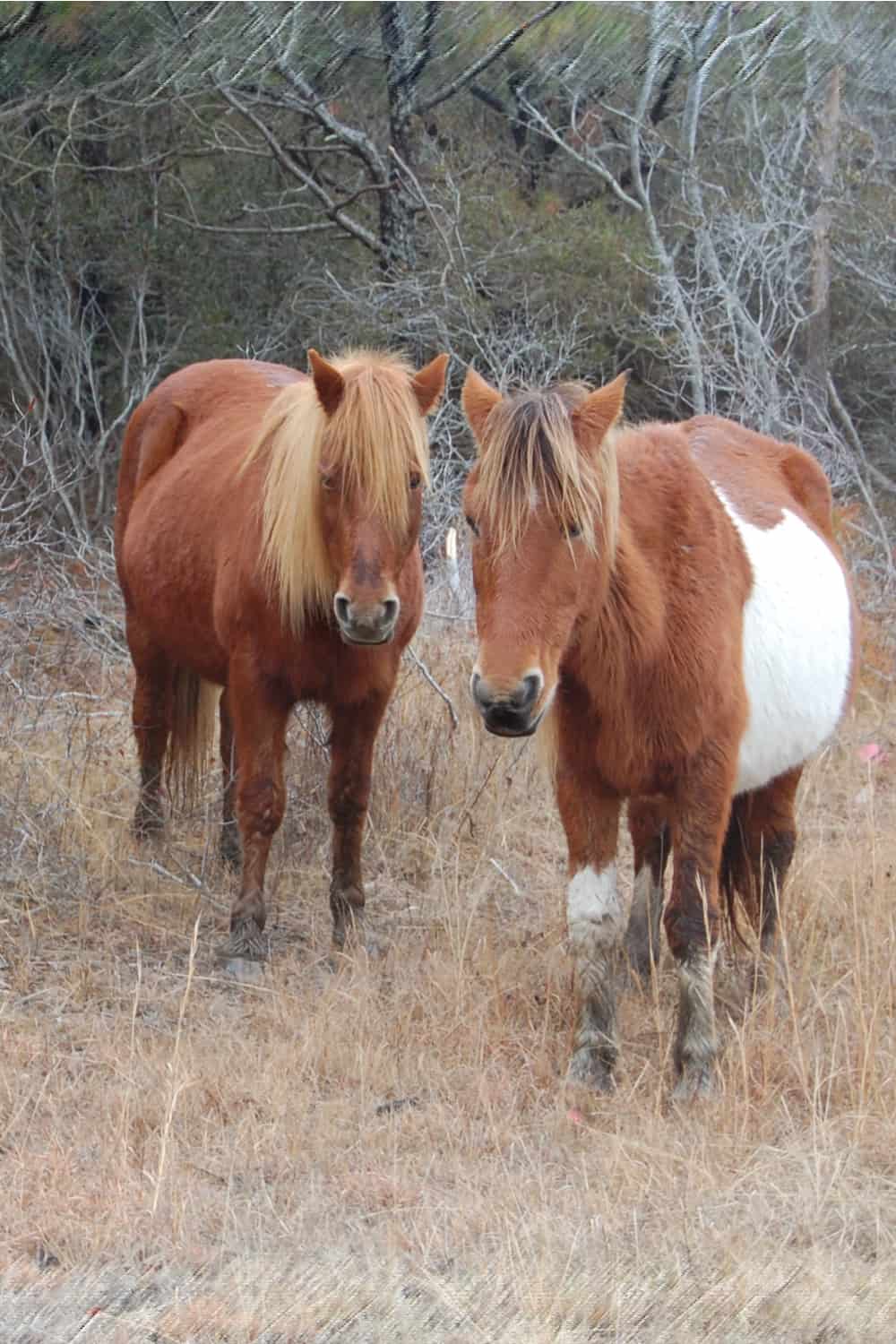 You’ll be forgiven for not imagining that some horses cost as much as a family car. The value of thoroughbred horses varies greatly. The price depends on the pedigree, age, origin, and market factors.

The state horse of Maryland is a special breed developed through selective breeding. It is therefore used for various extraordinary and high profile tasks.

It is majorly bred for racing purposes. However, the breed is also suitable for show jumping, hunting, and training exercises. The small thoroughbreds are also in demand for polo sports.

Thoroughbreds have also featured as show hunters, barrel racers, and steeplechasers. Outside the track, you are likely to spot a Maryland state horse in use by the police to enforce law and order.

FAQs about the State Horse of Maryland

1. Why Do They All Have the Same Birthday?

Unknown to many people, all racehorses share a universal birthday. All thoroughbreds born in the Northern Hemisphere celebrate their birthday on January 1. Their counterparts from the Southern Hemisphere have their D-day on August 1.

This helps in keeping track of the horses’ ages. The date also coincides with the racers’ breeding cycles.

2. Which Other States Have a State Horse?

There are slightly a dozen states in the US that have adopted a special horse breed as an official state horse. Five among them include: