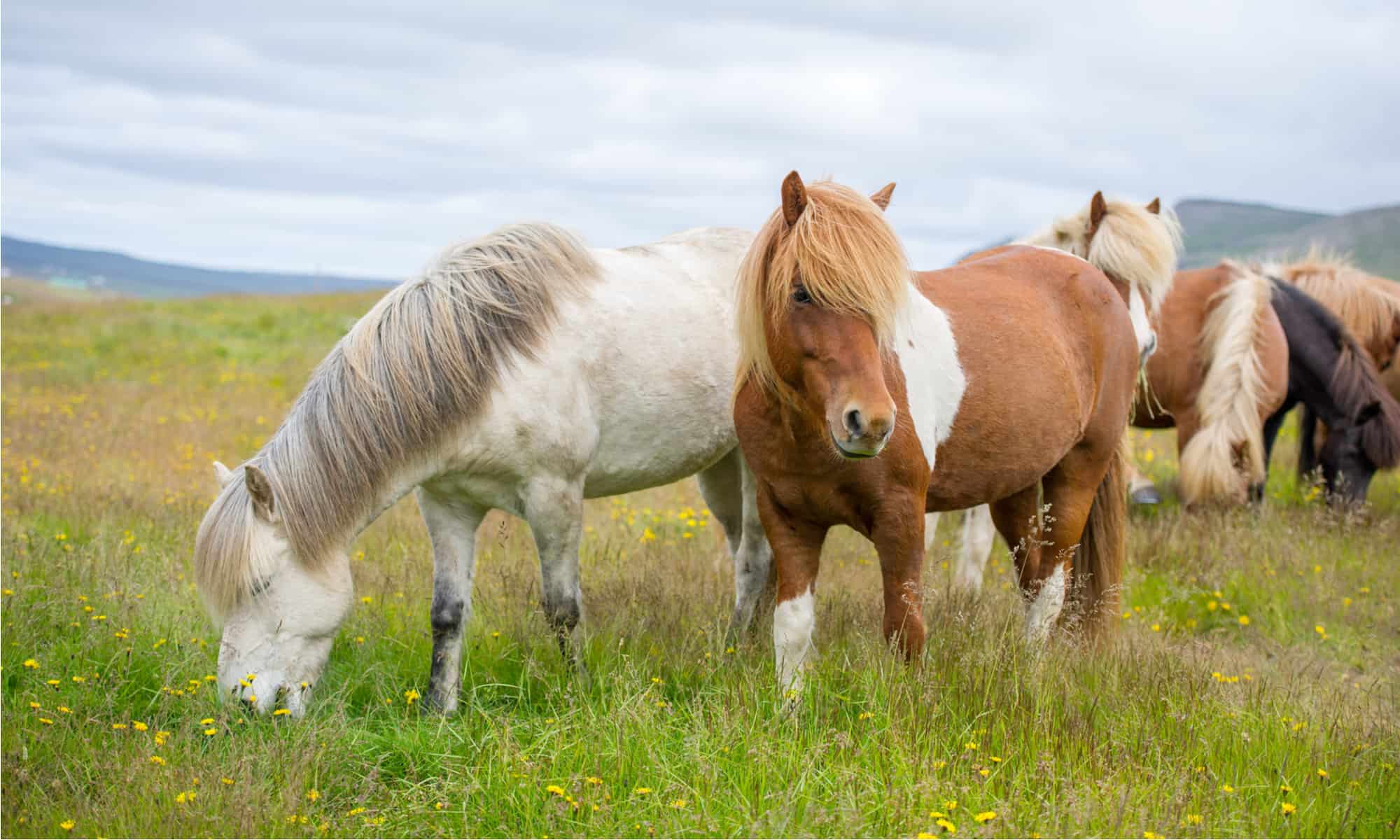 There’s a special place in our hearts for small horses! Just as beautiful as their grander cousins, they add an extra little dose of cute.

That’s why we’re going to take a look at 17 small horse breeds from all around the world. We’ll find out about their characteristics and history. And we’ll learn some quirky facts along the way!

So if you’re ready, let’s get started … 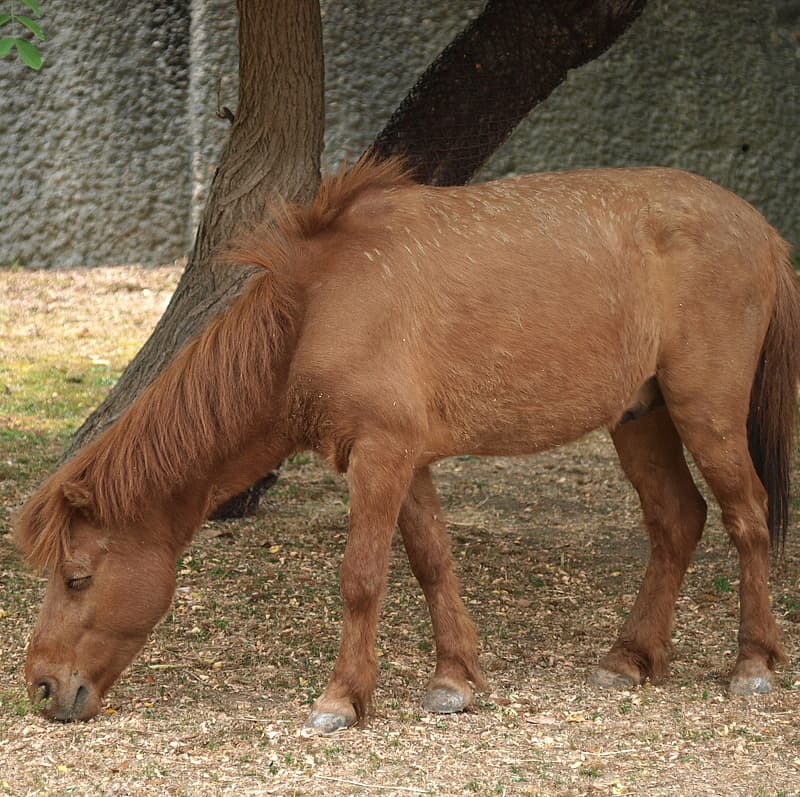 The Noma horse originates from Shikoku, the smallest of Japan’s main islands. This pretty animal is sadly an endangered breed, and at one time only six were left in existence. Since then, careful breeding programs have seen numbers recover, but they remain very low.

The breed first emerged in the 16th century as a by-product of selective breeding to develop larger horses for battle. Smaller animals, standing 12 hands or less, were allowed to be kept by local farmers.

Their ability to navigate steep mountain passes and narrow paths made these smaller horses enormously valuable for agriculture. Over time, the compact, sturdy, strong and agile Noma emerged as a distinct breed.

Today, the remaining horses live on their own reserve, Noma Uma Highland. It’s a well-loved tourist attraction, receiving around 20,000 visitors each year. 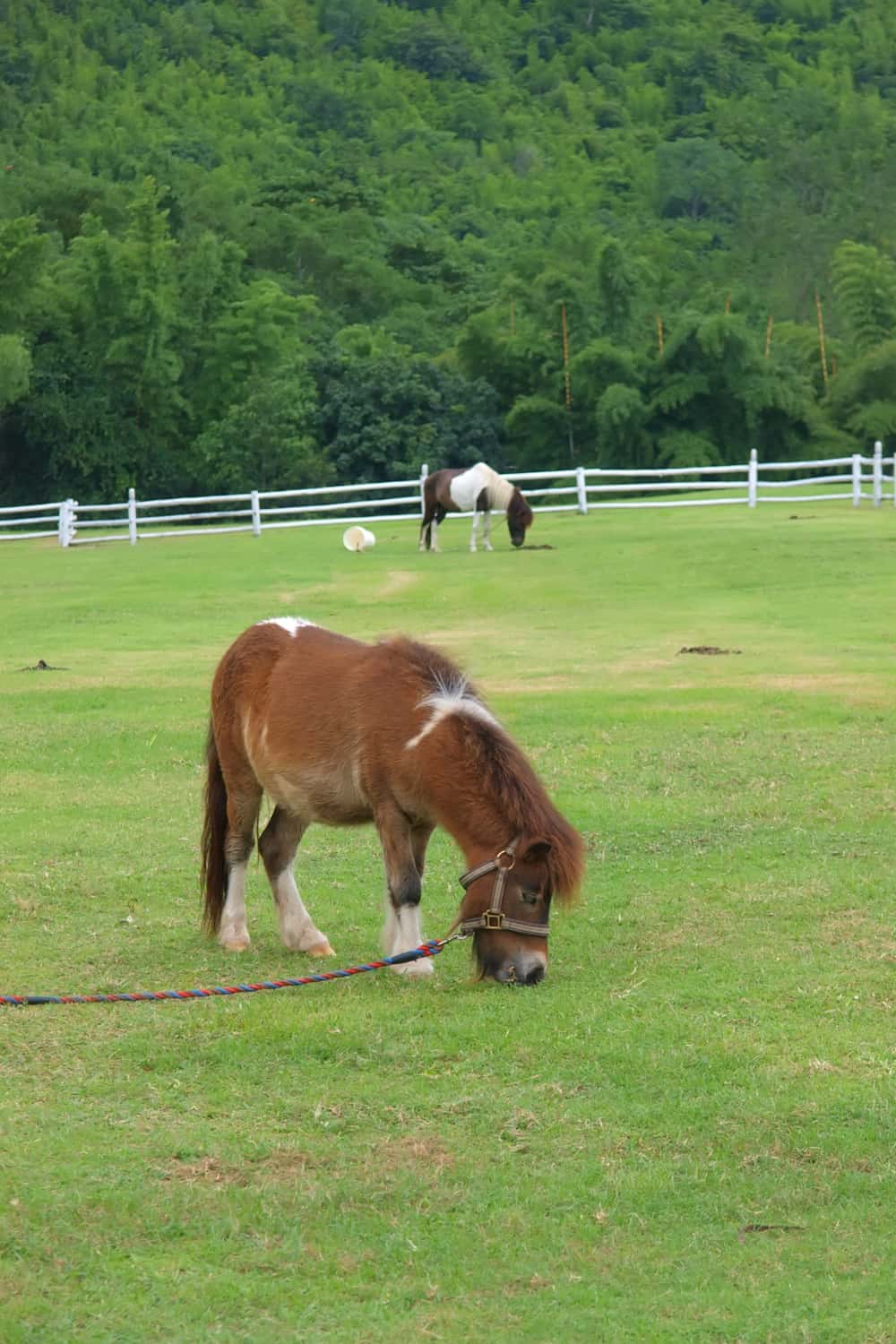 Strictly speaking, the miniature horse is not a specific breed. Rather, it’s a term that encompasses a wide range of smaller animals.

Miniature horses first appeared in Europe in the 17th century. Their endearing appearance made them favorites as pets of the various royal families. And in England and Wales, small ponies were frequently used in collieries in the 19th and 20th centuries.

Despite their small size, however, miniature horses are no less a real horse than their larger cousins. That means they need plenty of outdoor space, and are happiest living outdoors where they can run free.

The Guoxia comes from southern China, and its name means “under fruit tree horse”. Its small size – just 10 hands – meant it was perfectly suited to carrying small baskets of fruit in orchards.

It is thought to have first appeared during the Song dynasty, between 960 and 1279 AD. For many years it was believed extinct. In 1981, however there was a surprise: about a thousand animals were found living in rocky parts of China.

The Guoxia is known for its stamina, energy, and ability to thrive in harsh environments. It has pointed ears on a small head, a strong neck, deep chest and sturdy legs and hooves. Its thick coat is most commonly found in shades of bay, roan and gray.

The Falabella is one of the world’s smallest horses. But this elegant animal still retains the proportions of a horse rather than a pony.

It hales from Argentina and is a descendant of Iberian and Andalusian horses brought to south America by the Spanish. Its name comes from an early breeder, Juan Falabella, who developed the breed in the mid-19th century.

A mature Falabella stands between just 28 and 34 inches high. Their build is otherwise similar to Arab or Thoroughbred horses. The head may be slightly larger and the neck a little thicker.

Most Falabellas are bay, brown or black, although you may also see palomino and pinto coats. They make great rides for small children, and can be trained to pull carts. 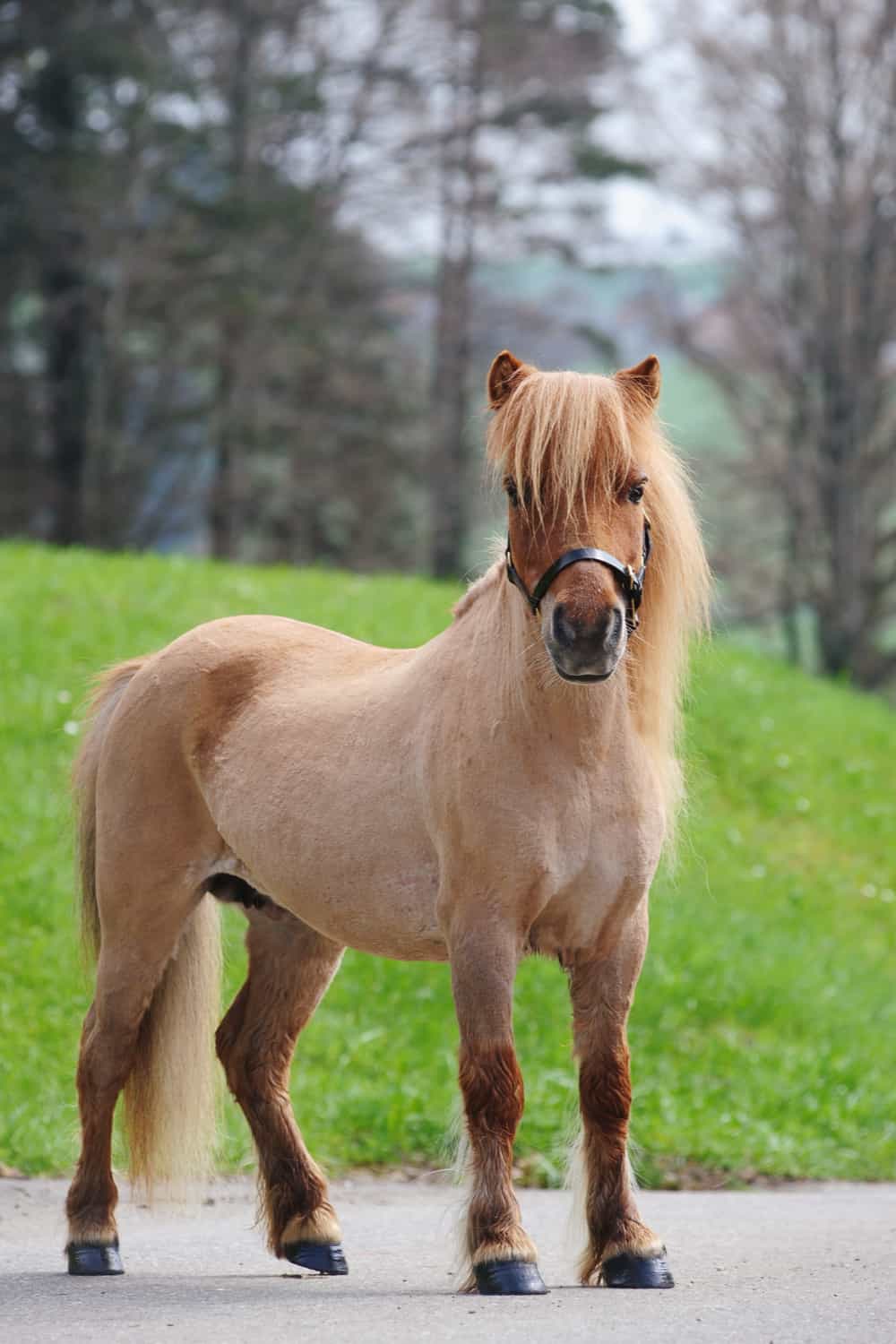 The Shetland Pony is, as its name suggests, a pony rather than a horse. But this little equine has bundles of personality to go with its distinctive looks.

It originates in the Shetland Isles to the north of Scotland. Here the harsh climate created a horse that was tough and strong, with a thick coat and short, sturdy legs. Their coats can be any color, but they are never spotted.  Shetlands can easily live for over 30 years.

In years gone by, they were used to pull carts and plows, and as pit ponies. Some animals are still used to carry peat in the Shetlands. But today, they are more likely to be found as riding and therapeutic animals. 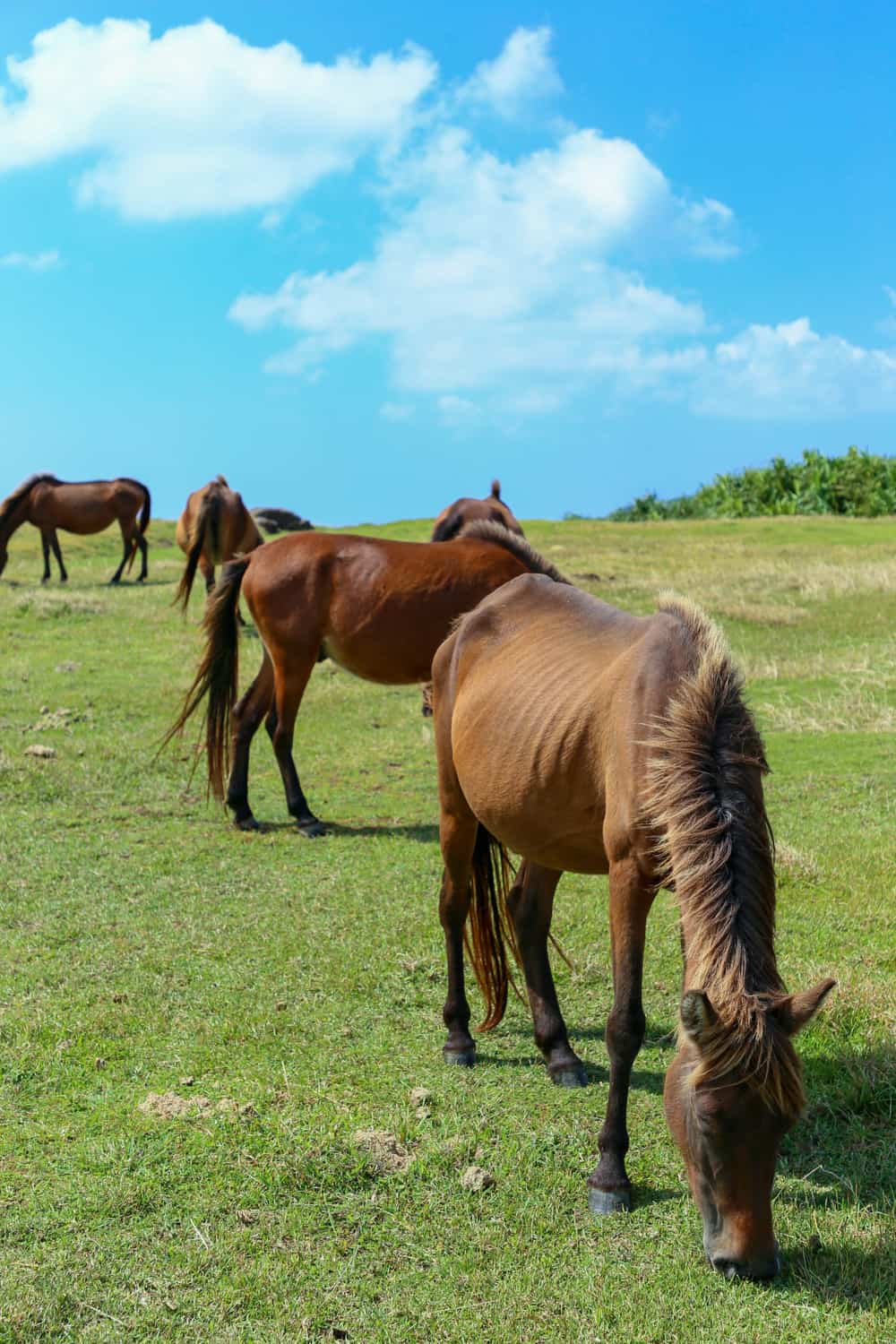 Like the Noma, the Yonaguni is one of only eight horse breeds that are native to Japan. It too is a small breed, with an average height of around 11.2 hands, and a good-natured disposition.

It’s another endangered breed, with only around 130 animals remaining. All of them live on Yonaguni Island, where the Yonaguni Pony Society works to preserve and promote the breed.

The horses were traditionally used in agriculture, but the increasing use of machinery meant their numbers dwindled. Today, the Society is promoting their use for recreational and therapeutic riding, as well as for education. 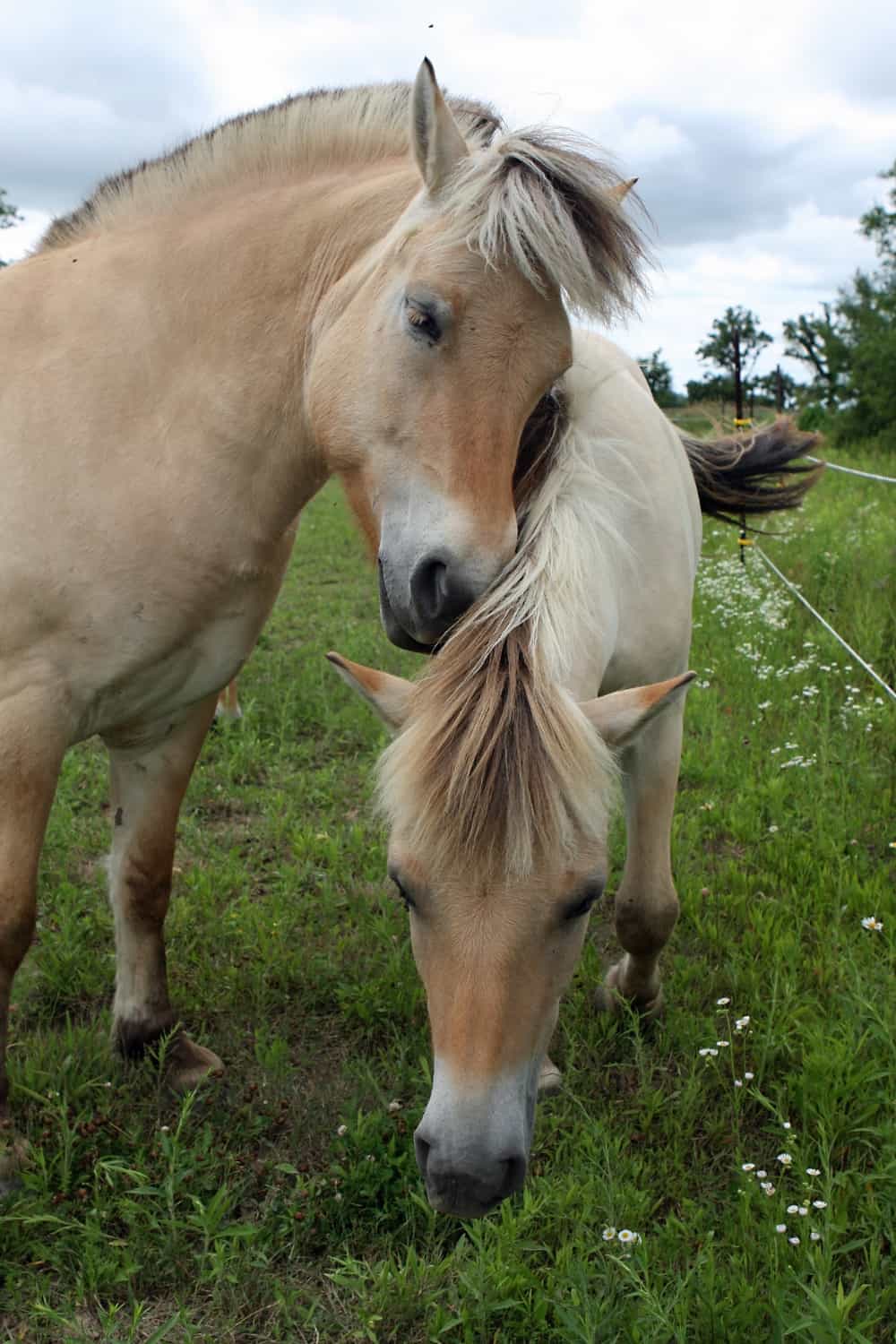 The Norwegian Fjord horse originates from the mountains of west Norway, one of three native Norwegian breeds. All horses have dun coats and typically stand between 13.1 and 14.2 hands high.

They combine the muscular build of a draft horse with smaller proportions and great agility. And despite their relatively diminutive appearance, they are more than capable of pulling heavy loads or carrying a fully-grown adult.

Their strength meant that they were valued on farms before machinery took over jobs like plowing. And their gentle. calm temperament means that they are today often used at riding schools and as therapeutic animals. 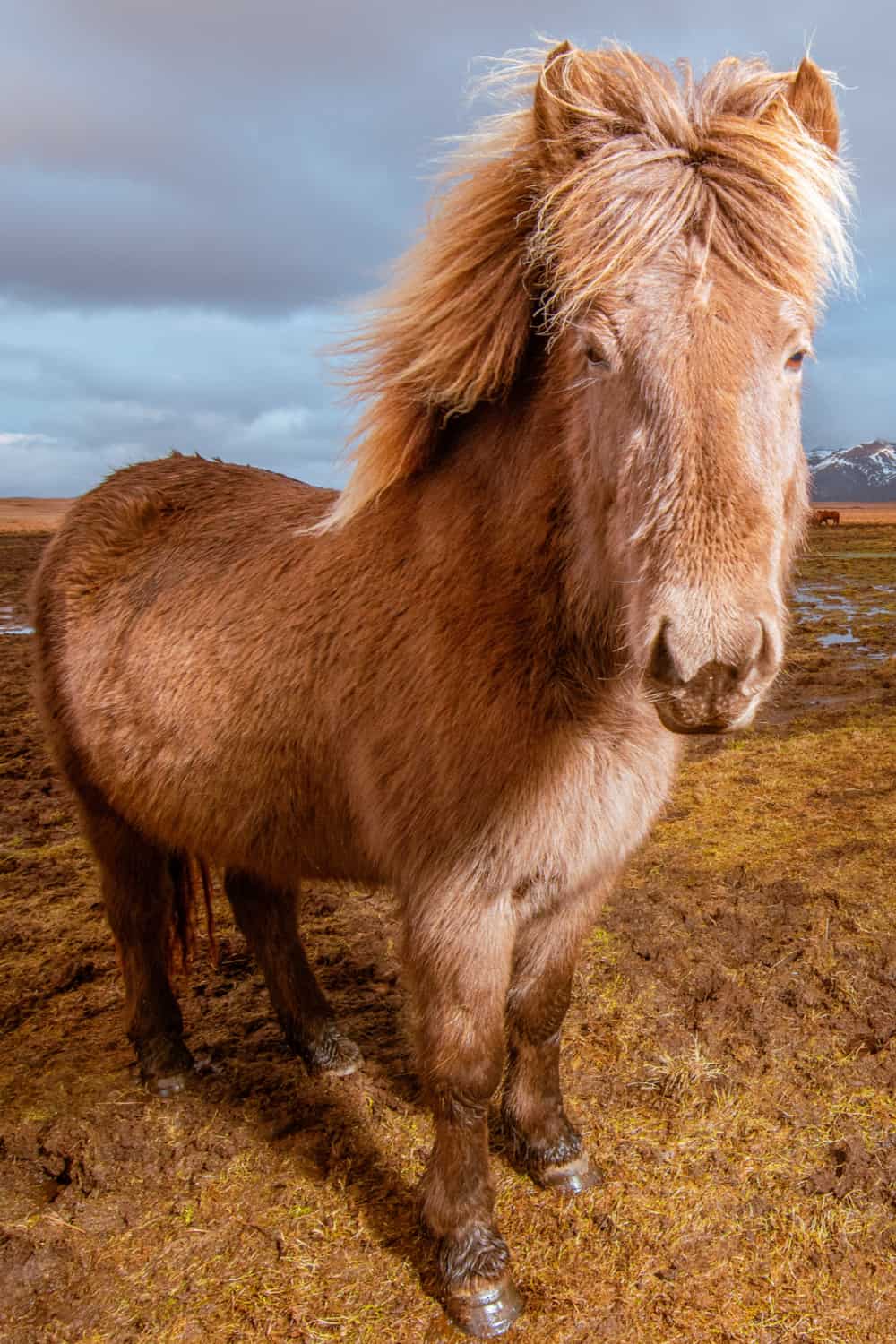 The ancestors of today’s Icelandic horses arrived in the country on the ships of Norse settlers. Some historians believe the short, sure-footed breed was chosen by the Vikings because of its suitability for long voyages.

They stand between 13 and 14 hands high, and weigh between 730 and 840 pounds. Although they are closer in size to a pony, they are always referred to as horses. Some attribute this to their gentle but spirited nature, others to their bone structure and weight.

Icelandic horses have more than 40 basic colorings, and over 100 variations. Icelandic people believe that the color of a horse’s coat reflects its personality – “pink” horses, for example, are considered willful. 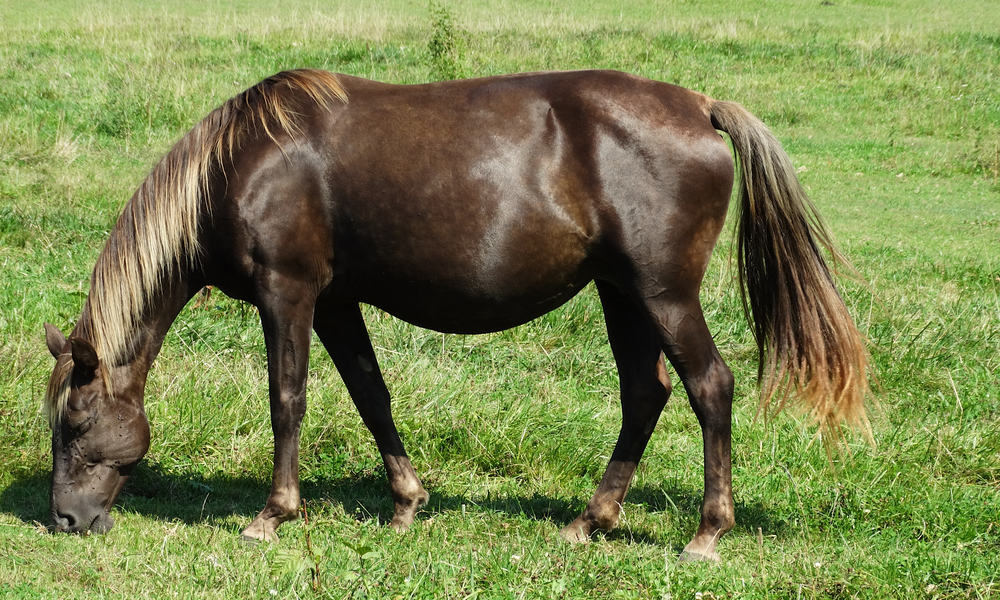 Kentucky Mountain Saddle Horses are divided into two classes, depending on their height. The shorter horses are categorised as Class B, and stand between 11 and 14.1 hands high.

As you’d expect from the name, this breed originated in Kentucky. The first breed association was formed in 1989. Today, there are over 24,000 registered horses. Most of these are in their home state, but they can also be found across the USA and Canada.

The breed has a natural ambling gait, known as the “single foot”. This makes it an exceptionally smooth ride, and the horses are particularly prized for their sure-footedness over tough terrain. 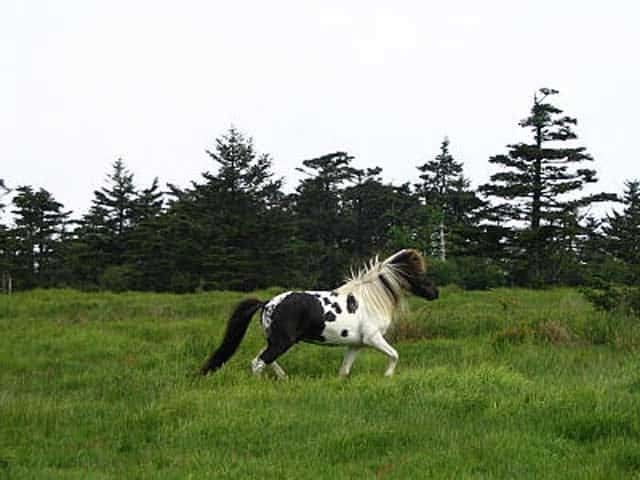 The Virginia Highlander is found mostly in eastern and southeastern parts of the USA. It emerged as a breed in 1960, under the watchful eye of breeder William M. Pugh.

The horses stand between 13 and 14 hands. They’re known for their natural single-footed gait and calm, friendly and spirited temperament. Their coats can be many colors, including roan, gray, chestnut, black and white.

A breed registry was established towards the end of the 20th century. Today. there are over 130 registered Virginia Highlanders. 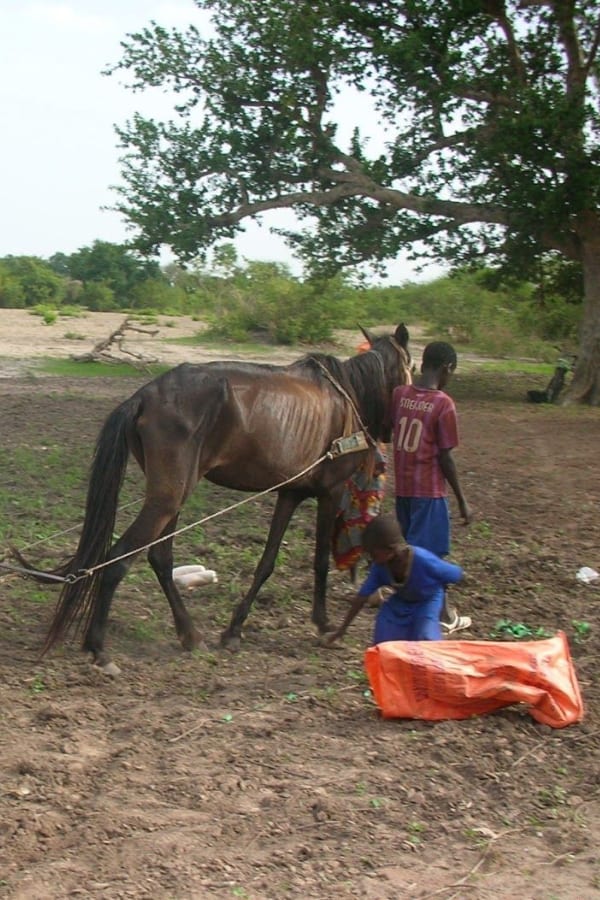 The M’Par comes from the Cayor region of Senegal, where it is the smallest of four native breeds. It’s also known by its French name, Cheval de Cayor.

It stands between 12.3 and 13.3 hands. It’s not the most classically beautiful of horses, with a heavy head, long back and thin legs. But it has exceptional endurance, and a rustic charm.

It’s used as a light draft animal, often pulling smaller carts and carriages. There are no official figures on population, but sadly, numbers are believed to be dwindling. The M’Par looks set to be absorbed into the more populous M’Bayar breed.

The Lokai originates from the mountains of Tajikistan. There, it’s used for carrying packs, as well as for riding and light draft work.

It stands between 14 and 14.2 hands, and the most common coat color is a beautiful chestnut flecked with gold. Other Lokais have bay or gray coats, and occasionally they are dun or black. Now and again, you’ll also come across an animal with a curly coat.

Lokais have a long neck, prominent withers, short back and well-formed, muscular legs. They’re now being crossed with Arabian and Thoroughbred horses to develop a new breed for riding. 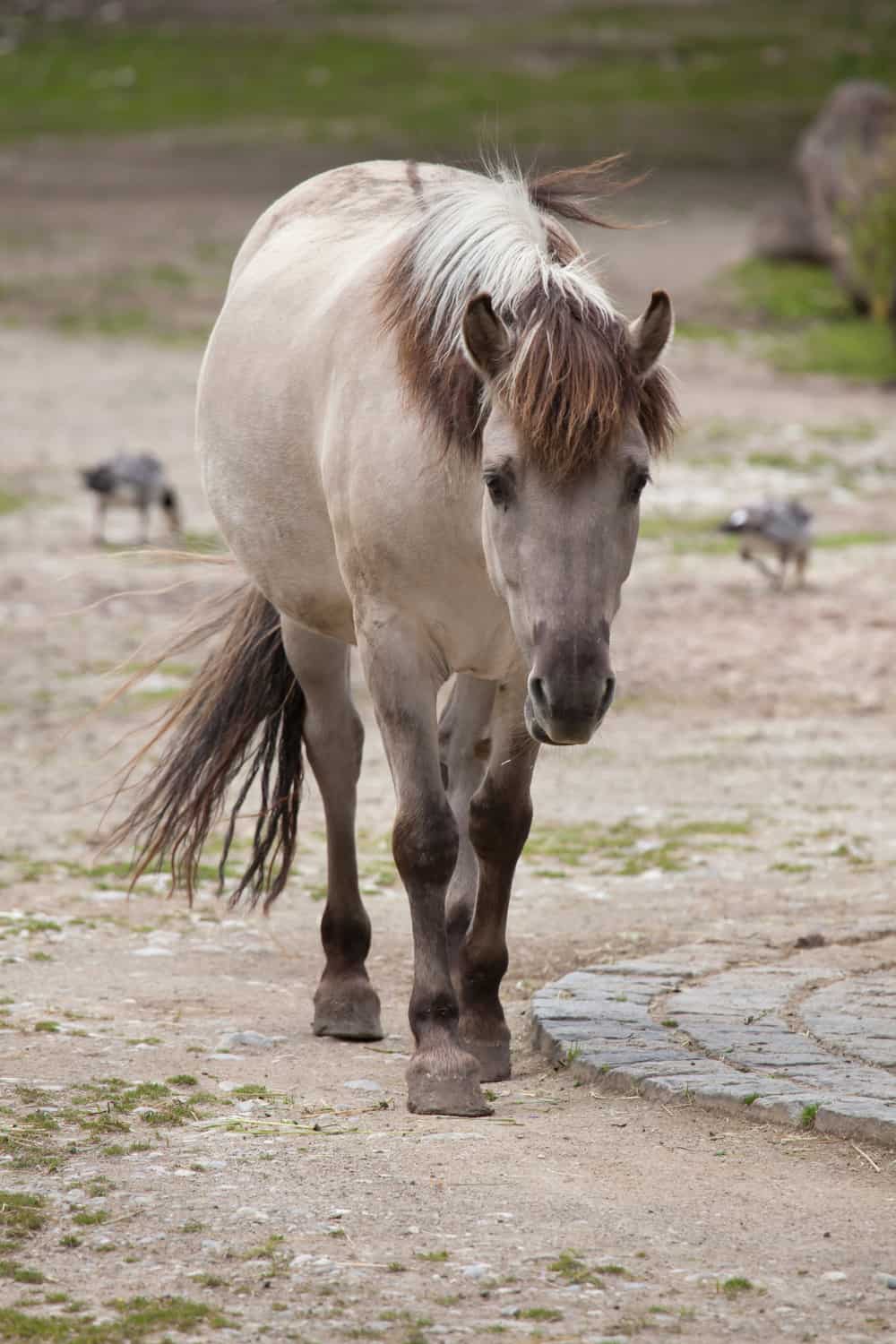 The Heck was created by German zoologists Lutz and Heinz Heck, who were seeking to recreate the extinct Tarpin horse. Although the Heck isn’t an exact copy of the Tarpin, it shares its grullo color and primitive markings, which include stripes on the legs.

The Heck stands between 12.2 and 13.2 hands and has a large head, low withers and strong hindquarters. They are friendly, calm, curious and intelligent, but also have a very independent spirit.

Many of the horses were exported to the USA, and the 1960s saw the creation of a breed association. Today, a few private American breeders use the horses for riding and light driving. Latvia also has small numbers of Hecks living in the wild. 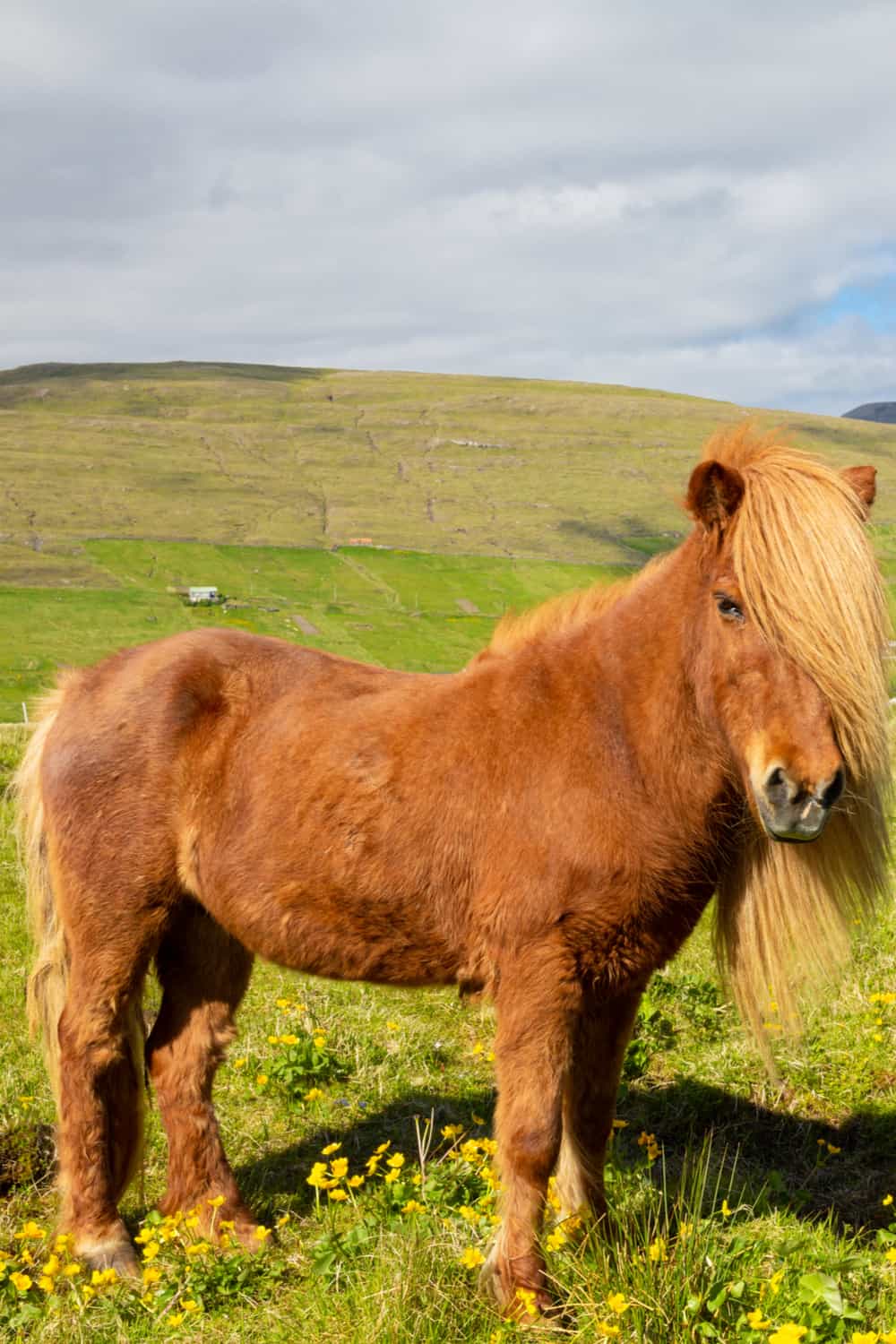 While the small height of the Faroe classifies it as a pony, it’s known as a horse by the Faroe Islanders on account of its strength.

it’s closely related to the Icelandic horse but is slightly shorter, standing between 11.1 and 12.1 hands. Its ancestors are thought to be horses brough to the islands first by Irish monks and later by Vikings.

The breed had to adapt to the harsh Faroese climate, developing into a hardy animal that could survive on meagre rations. As a result, Faroe Ponies have a high life expectancy. In temperament they are patient and gentle, but can also be headstrong.

Their numbers dwindled as a result of extensive exports, and by the 1960s they were threatened with extinction. Dedicated breeding programs saw the population rally, and today there are 70 purebred animals on the islands. 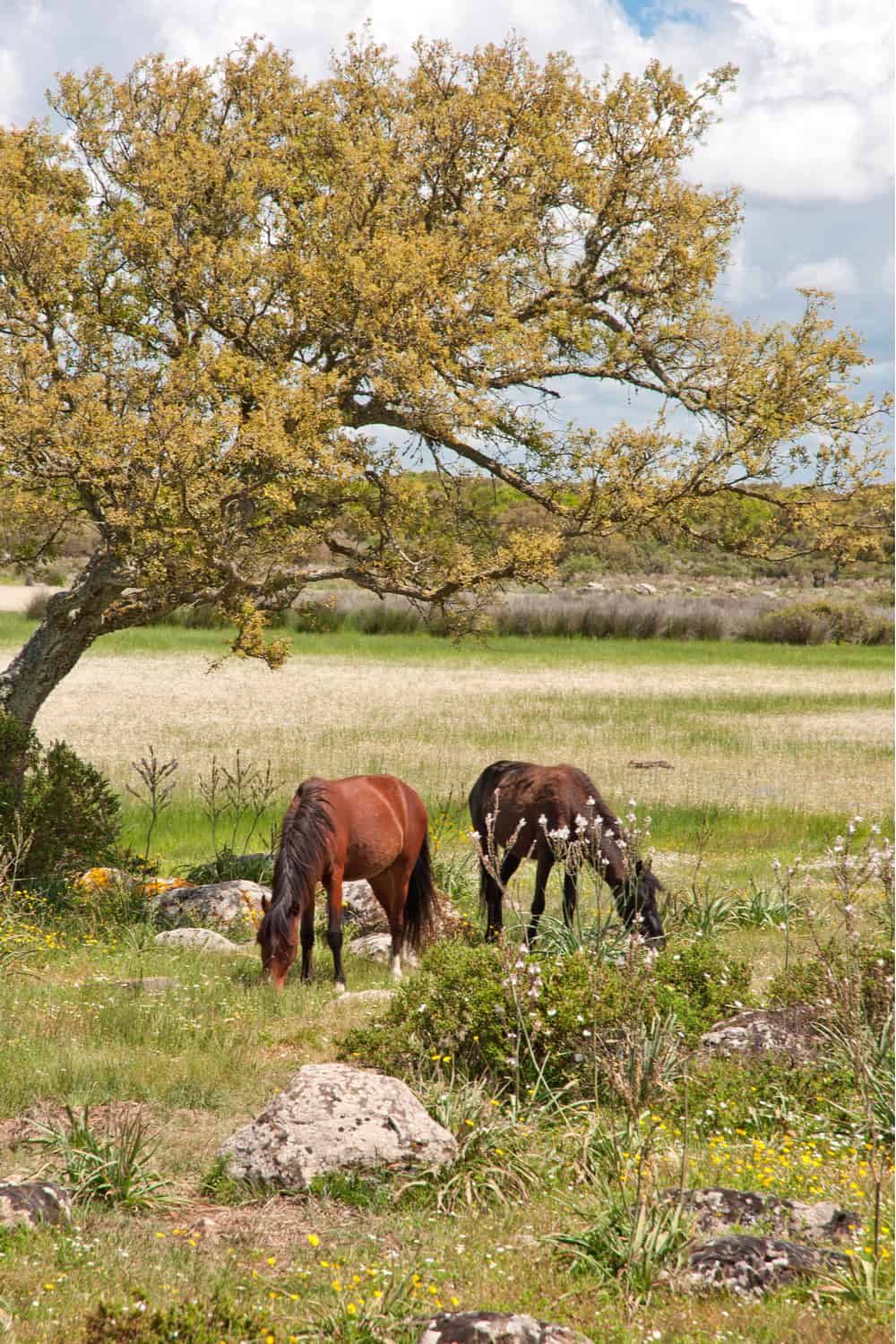 The Giara is one of 15 indigenous breeds on the Italian island of Sardinia. It stands between 11.1 and 13.1 hands, and is strong, sure-footed, spirited and hardy. Most of the breed are black, bay or chestnut, and they have thick manes and small, strong hooves.

Today, there are around 700 Gaias living mainly on the rocky plateau of southern Sardinia. Some are used on farms and for riding.

Efforts are now underway to breed from a combination of Gaias and Arabian horses. It is hoped that the new breed, the Gaiarab, will be successful in equestrian sports.

The Baise horse is a native of Guangxi in southern China. It is also sometimes known by the name of that region.

It’s a strong horse, despite its small stature – it stands between 11 and 11.2 hands. It’s most usually bay, chestnut, black or gray, and has a heavy head, straight shoulders and strong legs and hooves.

Although its precise origins are lost in time, the breed appears to have a long history in the region. Bronze statues of horses similar to the Baise have been found dating back to the 3rd century BC.

Today, it continues to play an important role in community life, including in wedding ceremonies. 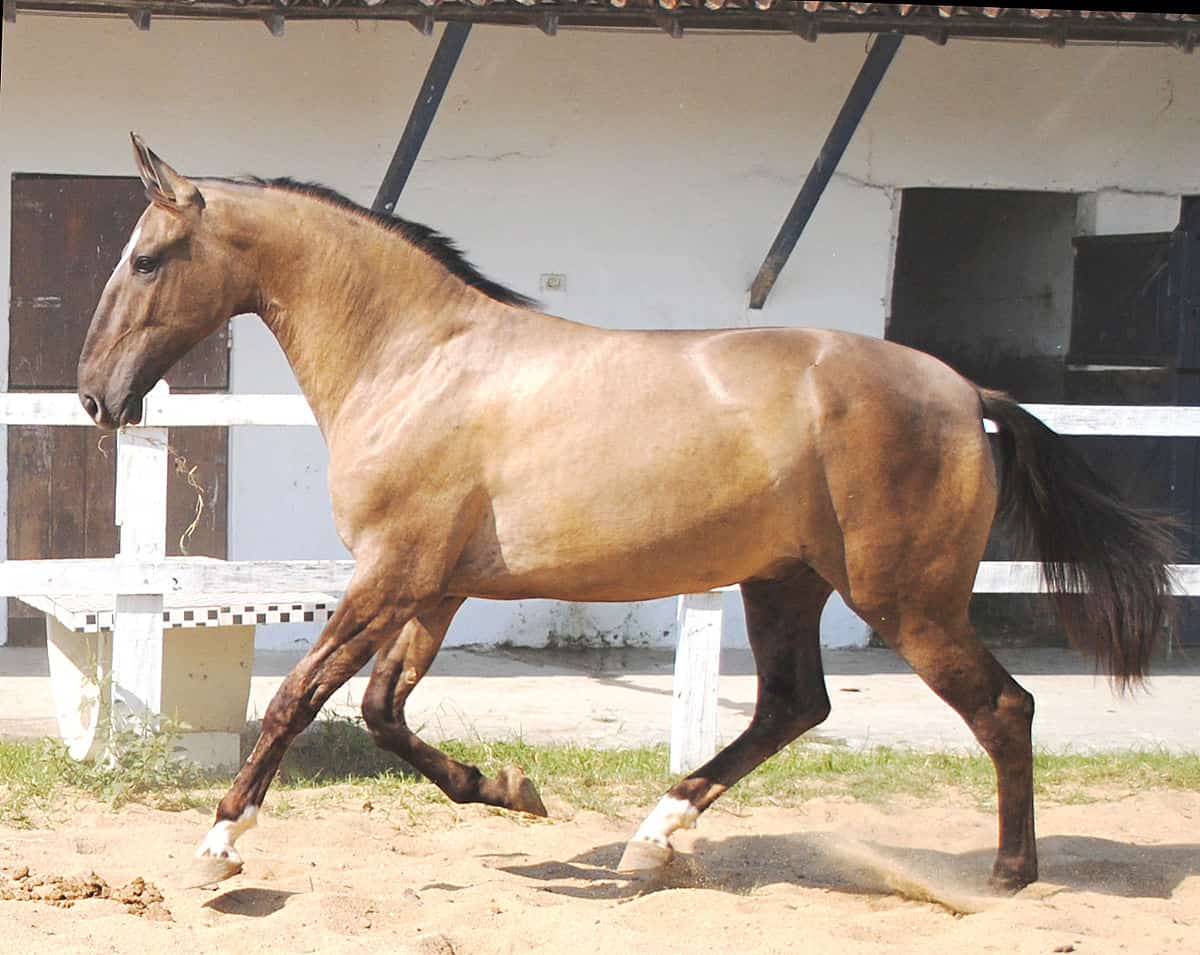 The Campeiro originates in Brazil and is also known as the Marchador das Araucárias. It is believed to be descended from horses brought to the country by Spanish expeditions in the 16th century.

The breed typically stands around 14.1 hands and weighs about 930 pounds. The most common coat color is chestnut, although many horses are also bay and dark gray.

Campeiros have an ambling gait that makes them very comfortable mounts. Today, many horses are used for riding, herding cattle and for pulling light loads.

That brings us to the end of our round-up of 17 small horse breeds. We hope you’ll agree that the many wonderful creatures we’ve seen demonstrate that small is beautiful!

From horses that work on farms, to therapeutic animals and even pets, small breeds are loved around the world. And with programs working to preserve the future of endangered breeds, we hope they’ll be around for many years to come.