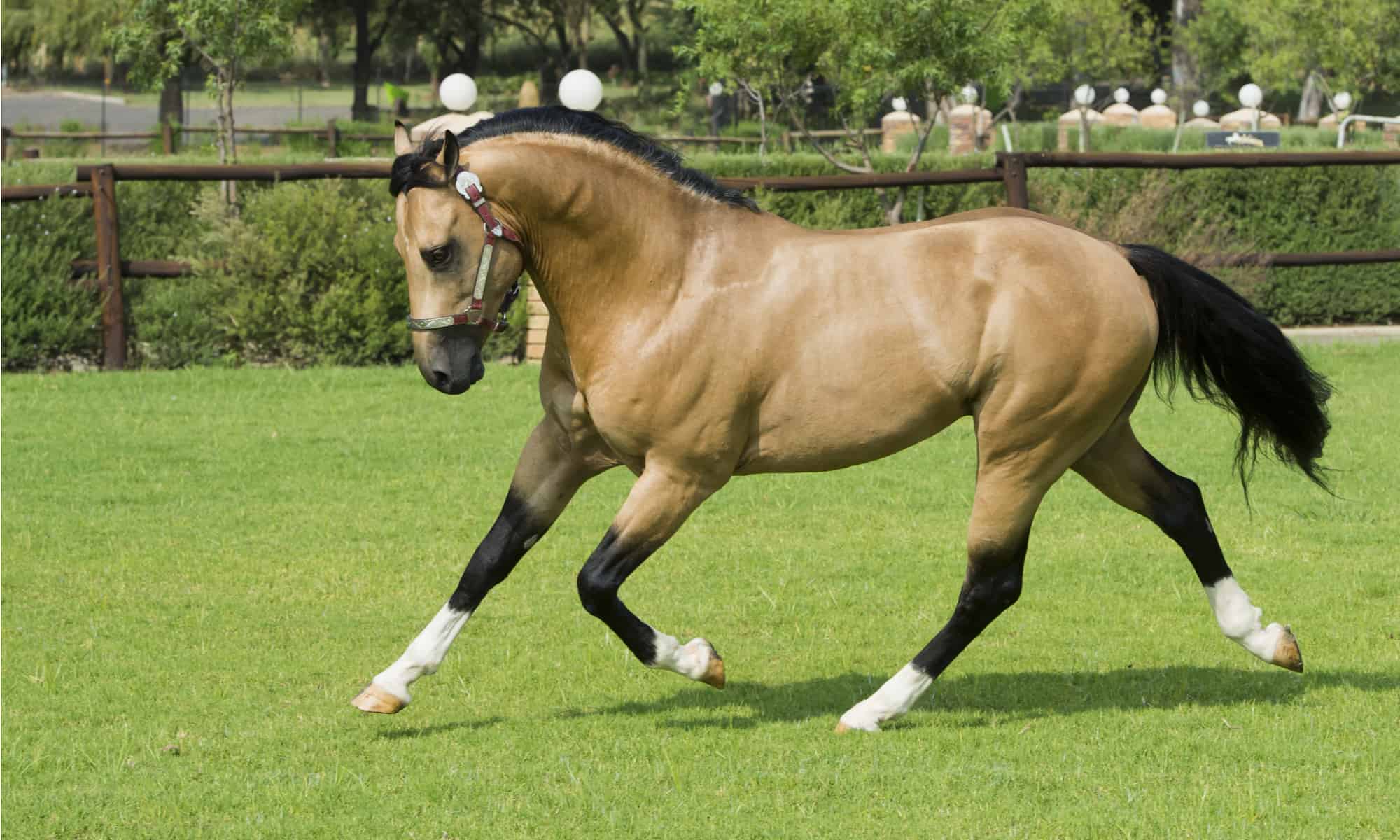 The American Quarter horse (Quarterhorse) the most beloved American horse. It is the best racing horse for short distances that can sprint 25% faster than any other breed. Its name indicates that it can outrun other horse breeds and reach speeds higher than 40 mph (64.5 km/h).

The Quarter Horse is one of the most complicated and beloved horses in the US that became famous for its participation in quarter races many centuries ago. Now, let’s see what is a Quarter horse precisely.

The Thoroughbreds imported from England were the first horses crossbred with native colonial horses on the US Eastern seaboard.

Janus, a Godolphin Arabian grandchild born in 1746, was one of the most notable imported horses. It came to colonial Virginia in 1756 and became a foundation sire of all today’s American Quarter Horses.

Thoroughbreds like Janus influenced the next generations and gave essential genes to the colonial Quarter Horse development. The resulting offspring was small, hardy, and fast, so farmers often used them as workhorses during the week and racehorses on weekends.

As flat racing became increasingly popular among colonists, the Quarter Horse gained more appeal as a sprinter over shorter runs. Often, these tracks consisted of nothing more than a straight road or a flat piece of ground.

When placed against a Thoroughbred, local sprinters were frequently victorious. Many colonial Quarter Horses became a part of the earliest American studbooks as the Thoroughbred breed became introduced in America.

That was the start of a lengthy relationship between the Thoroughbred and Quarter Horse, named after the 0.25 mile (0.40 km) race distance it excelled in.

Pioneers who settled the West in the 19th century looked for a fast and hardy horse. They came across semi-wild horses on the Great Plains descending from the Spanish breeds. Conquistadors introduced these animals into the territory that covers the Southwestern United States and Mexico nowadays.

Then, settlers crossbred the colonial Quarter Horse with Mustang horses domesticated by Native American tribes like the Shoshoni and Comanche. The new hybrid had an unusual natural affinity for keeping cattle safe, making it popular with cattlemen on ranches. 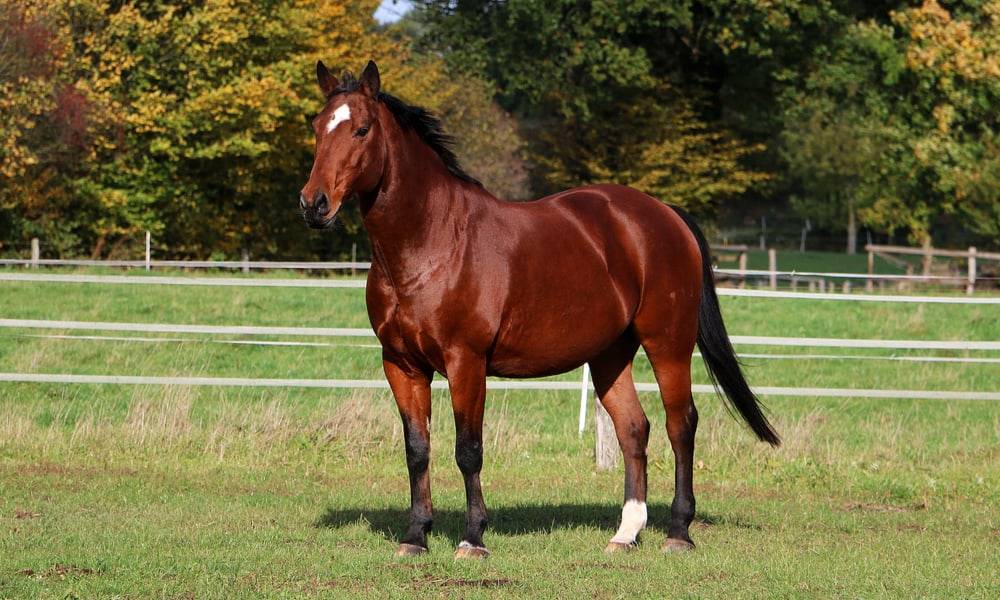 Founders of the Quarter Horse type included sires like:

The crucial horse was Copper Bottom, born in Texas in 1828. It was a descendant of the Byerley Turk, a Thoroughbred horse breed foundation sire.

The primary purpose of these horses in the western country parts was to work on ranches. Therefore, prominent Texas cattle ranches significantly influenced a modern Quarter Horse version.

Then the rodeo appeared. It began as an informal cowboy competition founded on cowboys’ and their horse’s skills. Very quickly, this show evolved into a famous competitive event throughout the West.

As you can guess, the Quarter Horse has dominated in competitions requiring speed and cattle handling ability until today. Ranchers established the American Quarter Horse Association just before World War II in 1940. Their goal was to preserve their ranch horses’ pedigrees.

The first registration number P-1 got Wimpy, a descendent of the foundation sire from the King Ranch. 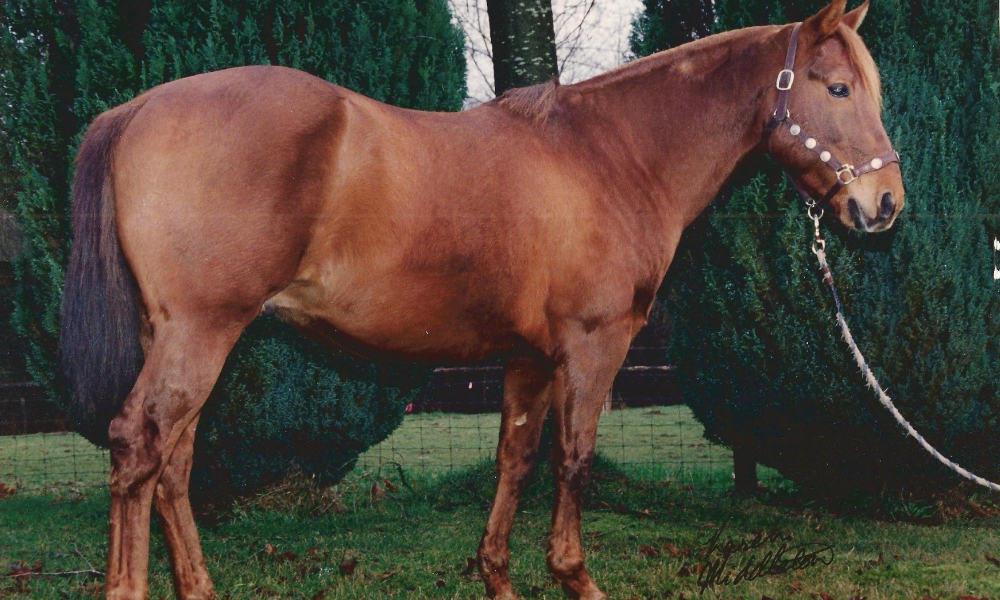 The Foundation Quarter Horse is a horse that can be traced back to the initial sires and dams’ bloodlines. This animal looks like a pure Quarter Horse, not a horse that looks and acts like a Thoroughbred. It wasn’t the American Quarter Horse Association founders’ intention initially, but the result is astonishing anyway.

Examining the extended lineage is the simplest way to tell if a Quarter Horse is a Foundation Quarter Horse or not. Thoroughbreds introduced after 1940 should be taken into consideration for determining the percentage of Quarter Horses’ genes. It is that easy.

Fortunately, a few foundation breeding farms in the US were able to retain the pure Quarter Horses. They maintain the original breed’s integrity, as evidenced by pedigrees. 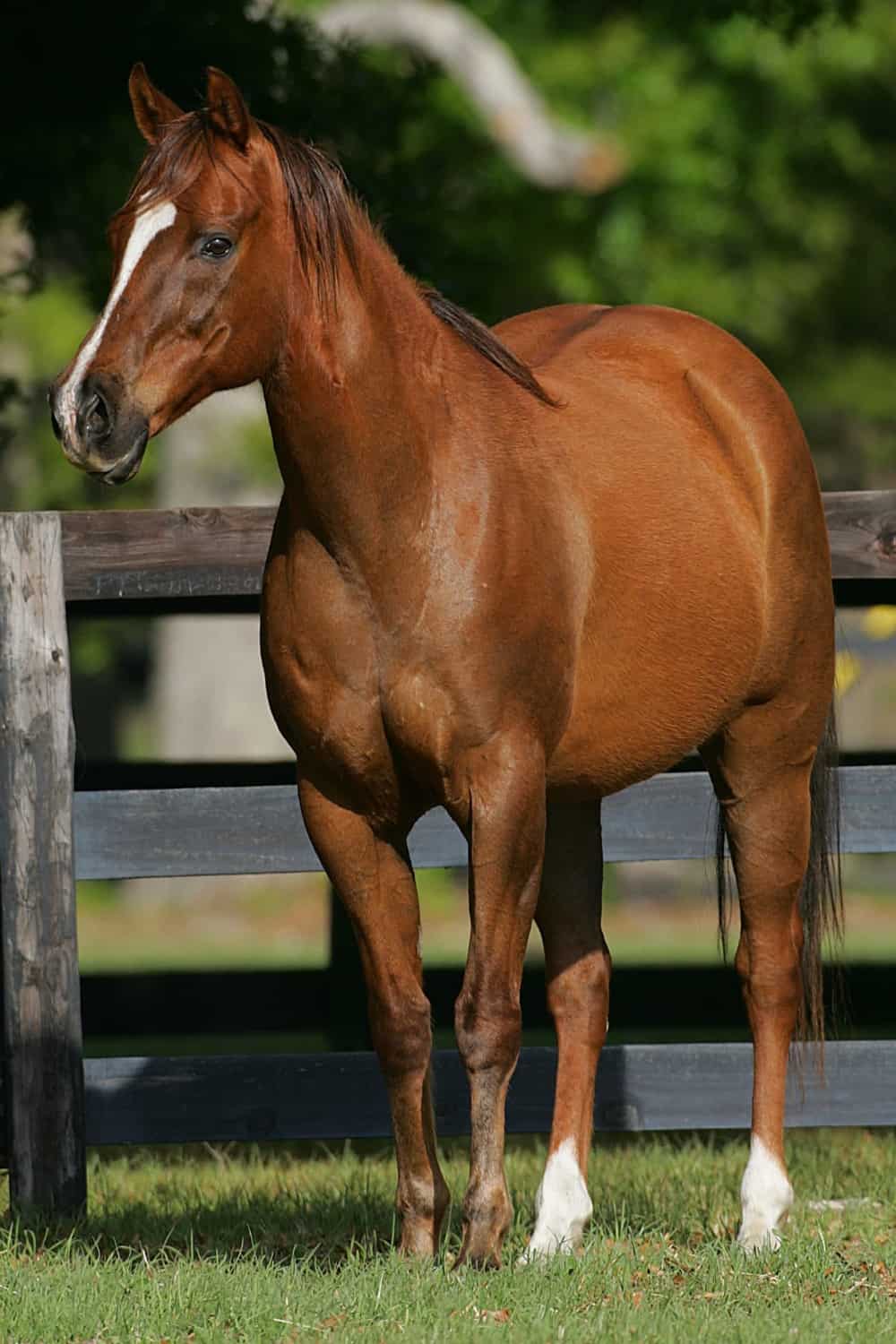 Appendix Quarter Horses are the first-generation crossbreed primarily built for sports. Their parents are two purebred horses, Thoroughbreds and American Quarter Horses. They weigh approximately 900 to 1,200 pounds (408 – 544 kg) and stand 15 to 17 hands or 60 to 68 inches (150 – 170 cm).

The physique proportions of American Quarter Horse can significantly fluctuate, depending on inherited traits. When Thoroughbred’s genes predominate, you will get a taller horse with a leaner build than other breeds.

The Appendix Quarter Horse is a horse with a wide range of abilities. It is only logical that this breed is a sought-after racehorse, given its racing prowess. On the other hand, it has various skills and is helpful in many situations. It is ideal for recreational riding, shows, and competitions.

This horse type comes in various colors, but the most frequent are black, gray, and brown. Bay, chestnut, and palomino are rare but more distinctive coat colors.

Their coat color usually has little bearing on whether or not they are regarded as full Appendix Quarter Horses. The bloodline is the only thing that matters for that categorization. 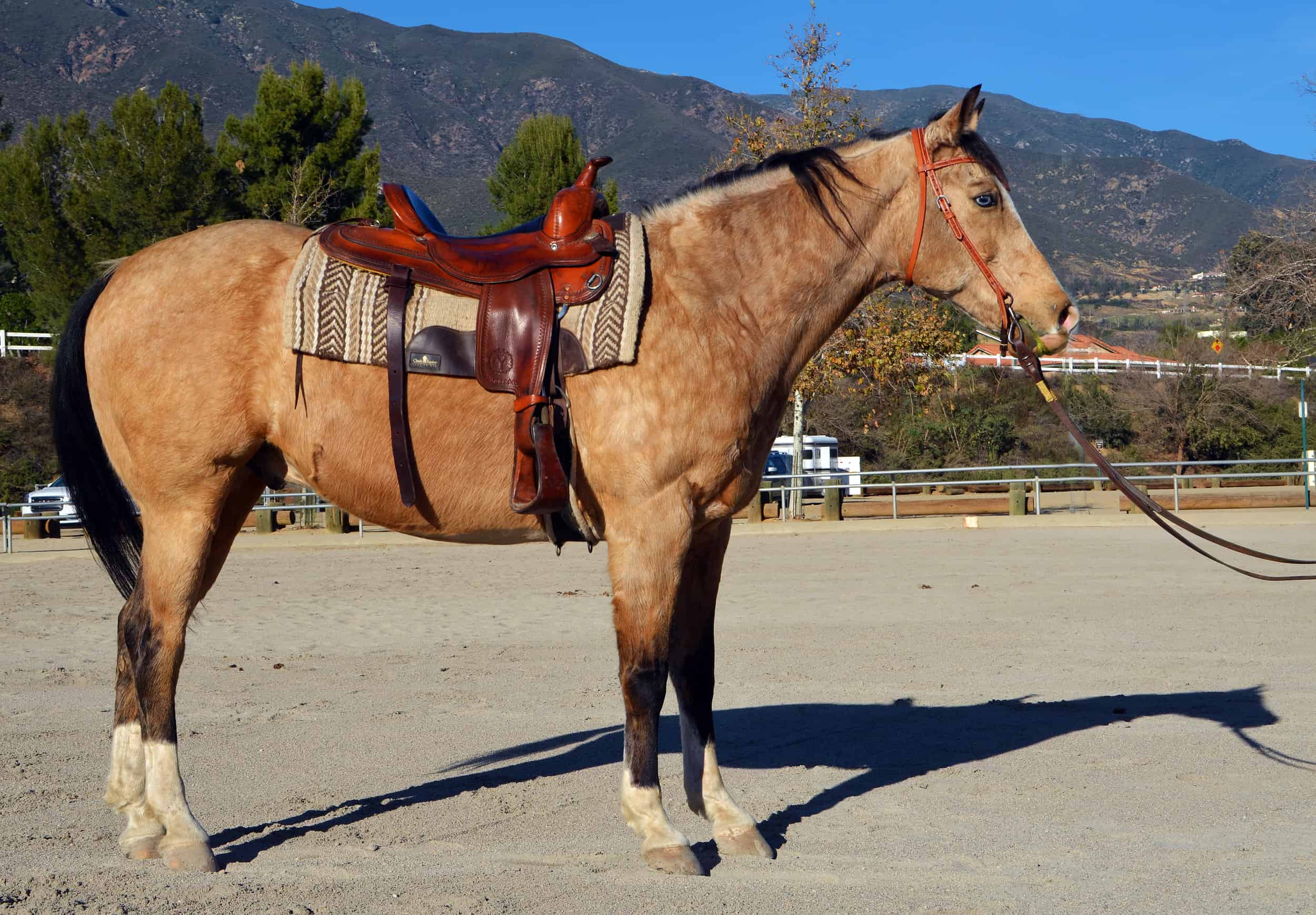 The Quarab Horse is a crossbreed created in two possible ways by crossing:

These horses are a relatively recent breed with an excellent combination of both parents’ characteristics.

They have been famous for years and have even a breed registry nowadays. Primary physical qualities may vary from one animal to the next, depending on the blood mix used.

When the Arab genes are more dominant, a resulted horse usually has longer necks and barrels. On the other hand, the Quarter Horse parent will affect muscular legs and rounded croups in their offspring. 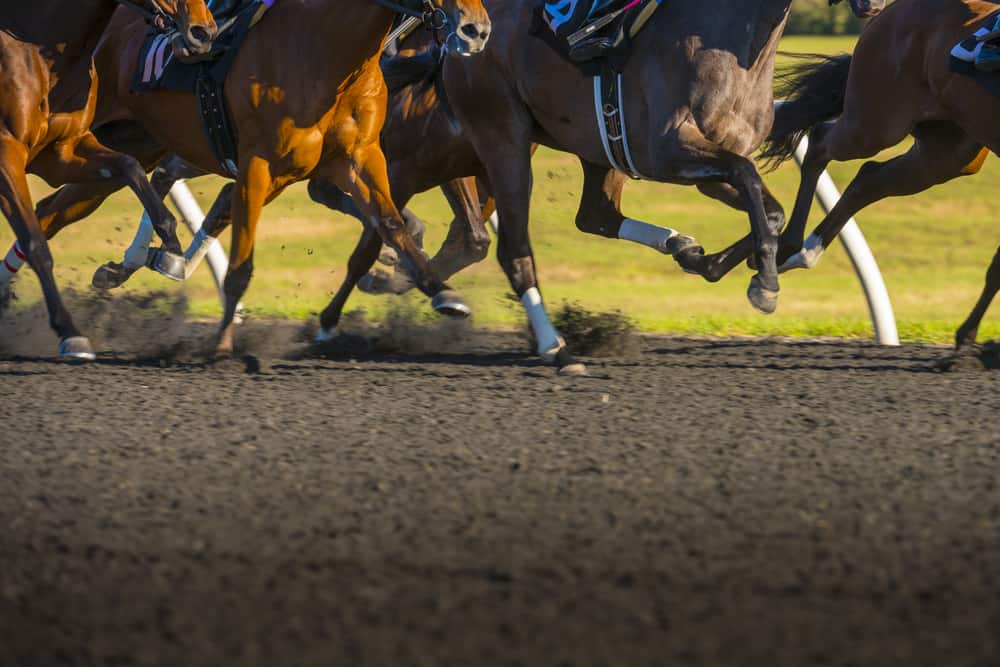 The American Quarter Horse has been bred to sprint, usually for short distances up to a quarter-mile. However, it has also been proven as a superior show horse in rodeo events like barrel racing and an excellent working horse on cattle ranches..

Its exceptional agility and explosions of speed allow for outstanding performances. It can reach a fantastic rate of 55 mph (88.5 km/h) and is widely defined as one of the world’s fastest short-distance horses. That makes Quarter Horse racing a popular sport in the US.

Although horse racing was popular at that time, the money and work required to layout a whole mile track put organized racing out of reach for many fans.

Modern Quarter Horse racing events appeared in the US in the 1940s. The majority of the races were contested on tracks in the West and numbered in the hundreds. Eleven of these races, ranging from 220 to 870 yards (201 to 796 m), exist nowadays.

Quarter Horse races of fewer than 550 yards (503 m) are usually run on a straight track. On the other hand, one turn or portion of a turn is typical for a lengthier racing event called the hook.

Plus, Ruidoso Downs in New Mexico hosts all of the events.

Gymkhana (O-Mok-See) is an equestrian competition that includes:

In both cases, dropping things or slightest touching results in fines or disqualifications.

The Blackfeet Indian word O-Mok-See means ‘riding big dance.’ It has evolved into a timed sport event for four western riders competing against each other. The clock measures their speed and competence.

The club invented the sport of O-Mok-See in 1944. However, it grew into a nationwide event in 1965 thanks to Keith Herrin, the national initiator from Helena.

The goal of breeding the Halter Quarter Horse is to get particular features. They allow the animal to compete and win competitions more concerned with looks than a performance like Halter, a horse show showing horses in hand.

Unlike other horse-related sports, the Halter Quarter Horse show involves the rider getting off the horse and using a leather halter to lead the animal around the arena.

The goal is not to score on how well a horse performs on an obstacle course or how fast it runs in a race. These horses are primarily judged on how they look.

As you can expect, the American Quarter Horse Association put on the top competitions. According to rules, the most critical factor in judging the Halter Horse is balance. Additionally, judges assess coat shininess, bone and muscle structure, and their correctness.

American Quarter Horses in the UK 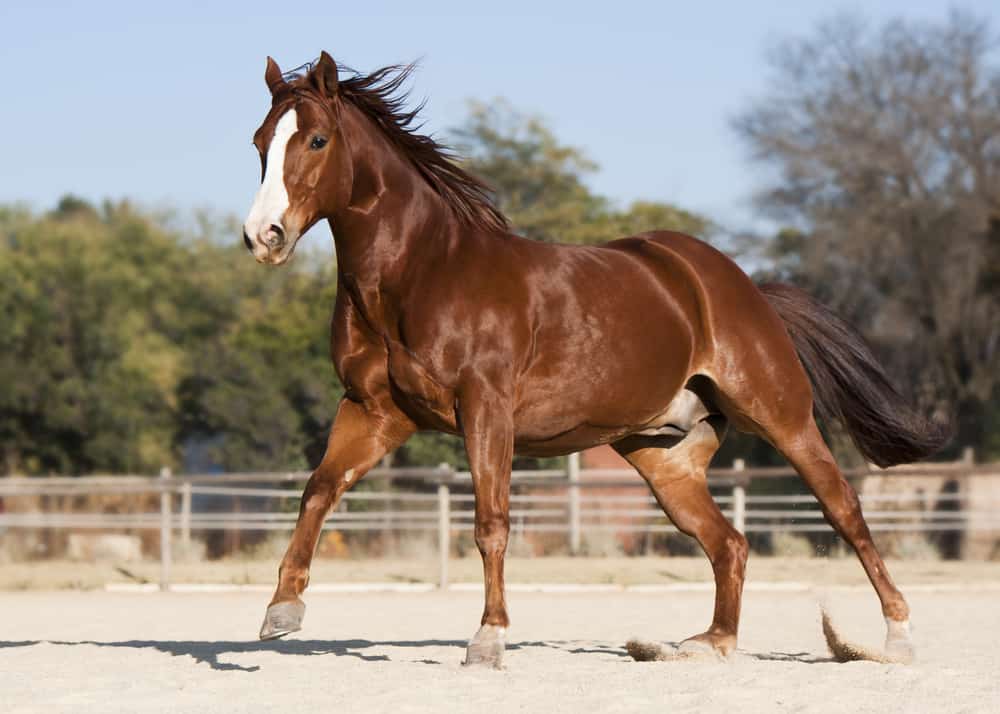 While still being a small percentage of the total horse number in the UK, the Quarter Horses presence in this country rapidly expands. Their number was more than doubled in the last fifteen years from less than 1,000 in 1996 to over 3,000 in 2010.

With raising awareness of the breed’s advantages and its superior characteristics, the continued growth of numbers is inevitable.

Unfortunately, Quarter Horse is not a flawless breed at all. Despite its ultimate characteristics, it is prone to five genetic diseases.

Hyperkalemic periodic paralysis – Since it is a dominantly inherited disease, it is enough for a foal to inherit these genes from one parent to develop symptoms.

This disease appears as a result of a flaw in the electrical impulses that control muscle contractions. It mainly occurs in powerfully muscled halter horses.

Polysaccharide storage myopathy – A deficiency in the glycogen synthase genes causes this common illness. Unfortunately, it affects over 10% of Quarter Horses. Typical muscle stiffness and cramping in affected animals can be moderate or severe, but that is something no one can predict.

Malignant hyperthermia – This common disease can go undetected for years. In most cases, it occurs after extreme stress, the anesthetic halothane, or treatment with a muscle relaxant succinylcholine.

Glycogen branching enzyme deficiency – This disease represents disrupted glycogen usage and storage in the brain, liver, and muscles. Since it is a recessive trait, it will occur in foals only if both parents carry the defective genes and pass them on to their offspring.

It is found in approximately 8% to 10% of Quarter Horses, but it is not rare in some American Paints and Appaloosas with Quarter Horse heritage either.

Hereditary equine regional dermal asthenia – This less common recessive condition affects less than 4% of horses. Those with this disorder have a deficiency in collagen structure and function, a protein found in skin, muscles, and cartilage.

Reputable breeders always use panel tests the AQHA offers to check their animals. They never use horses with unwanted genes structure in further breeding.

As soon as the AQHA sends a test kit, the horse owner needs to mail a hair sample to the University of California-Davis.

Its Veterinary Genetics Laboratory will test it, and the AQHA will inform the owners of the results and put them on both the certificate of registration and the horse’s record.

The American Quarter Horse is a high-quality breed, widespread and recognizable because of its quality for more than four centuries. The colonial version first showed in the 1600s, and thanks to its abilities, is still present. Running, working, and entertaining characteristics make this breed playful and valuable.