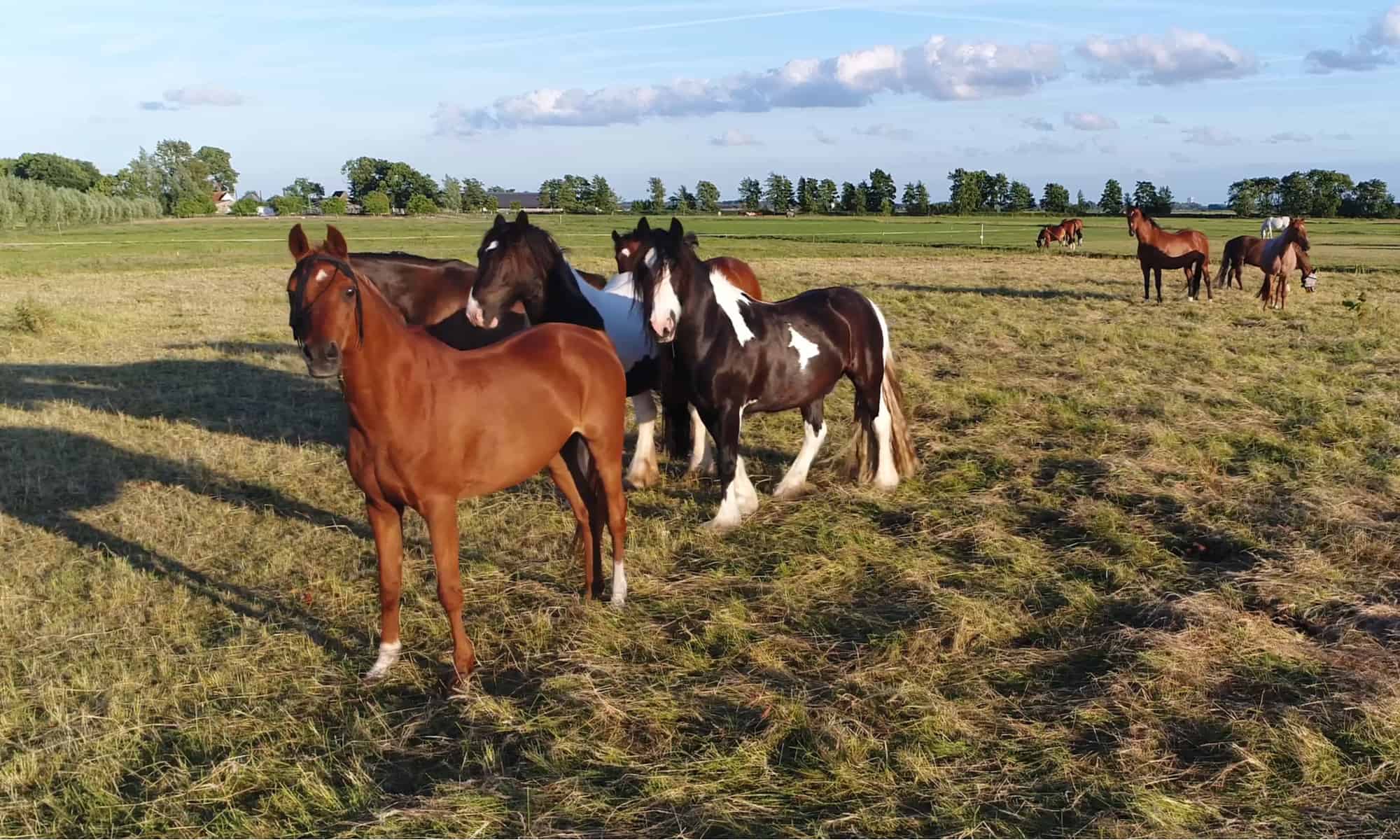 Much as we love horses, we know that keeping them can be an expensive hobby. But if money is no object, just how much cash can you splash on a horse?

We’re going to take a look at 10 of the most expensive horse breeds on the planet. And we’ll tell you just what it is about these beautiful creatures that makes them so pricey.

So if you’re ready, step this way to find out more! 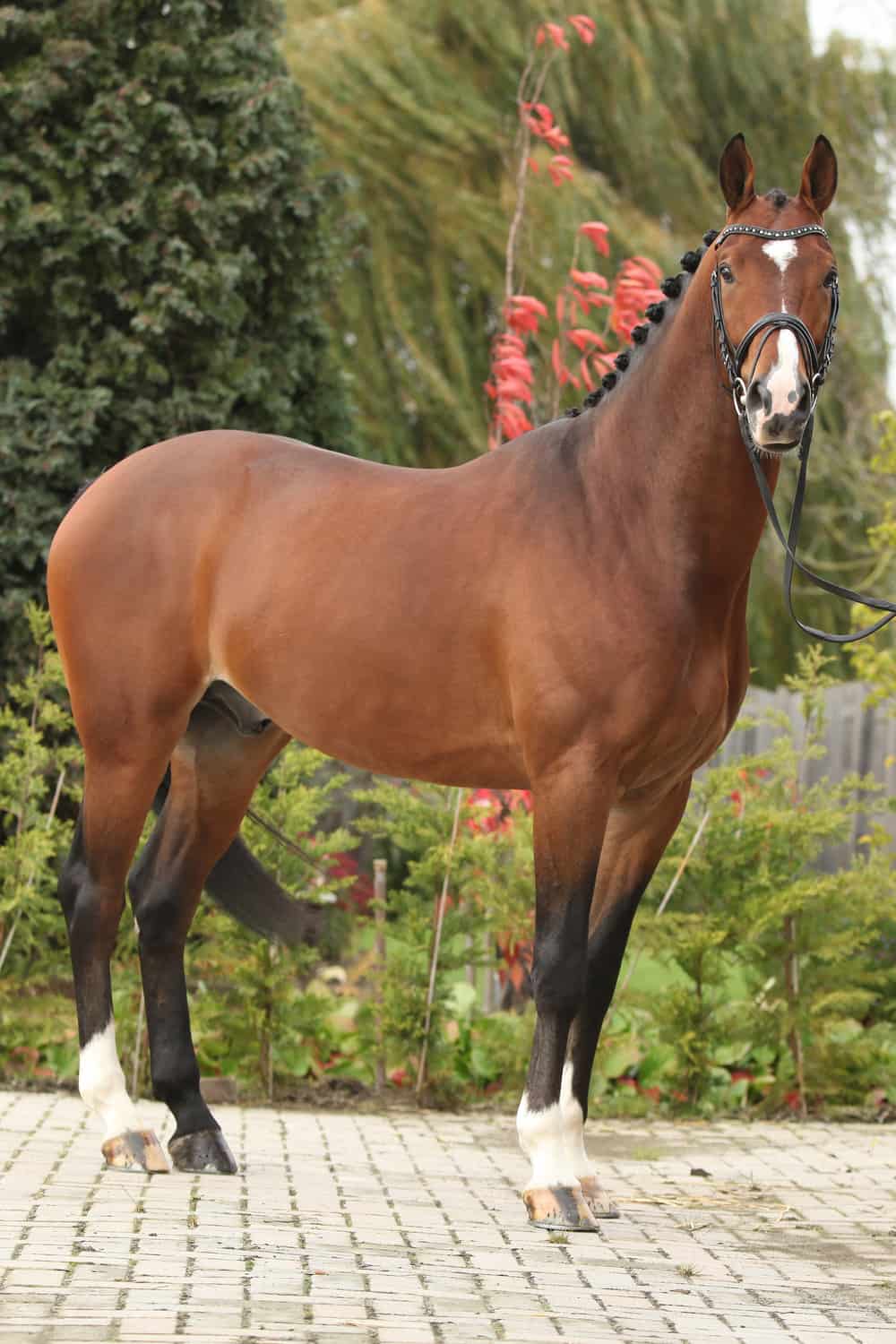 The Dutch Warmblood was developed through careful breeding in the 1960s. Today, this breed of horse is one of the most successful in equestrian competitions. And it’s for that reason that it commands a high price.

You can expect to pay between $6,000 and $15,000 for a Dutch Warmblood. But if you’re looking for a horse that’s trained to competition standard, you’ll need to pay much more.

How much more will depend on the individual horse. A reasonable expectation is between $15,000 and $75,000. But the sky’s the limit for a successful competitor.

Moorlands Totilas, a Dutch Warmblood reputed to be the best living dressage horse, was sold to a German trainer for an eye-watering $13 million. The horse had an enviable record in competition, having won three gold medals at the 2010 World Equestrian Games.

Dutch Warmbloods can be found in a range of equine colors, including bay, black, chestnut and gray. Many also have white markings.

They are a very healthy breed. Horses are disqualified from breeding if they have a wide range of medical conditions. As a result, the population generally lives to a ripe old age. 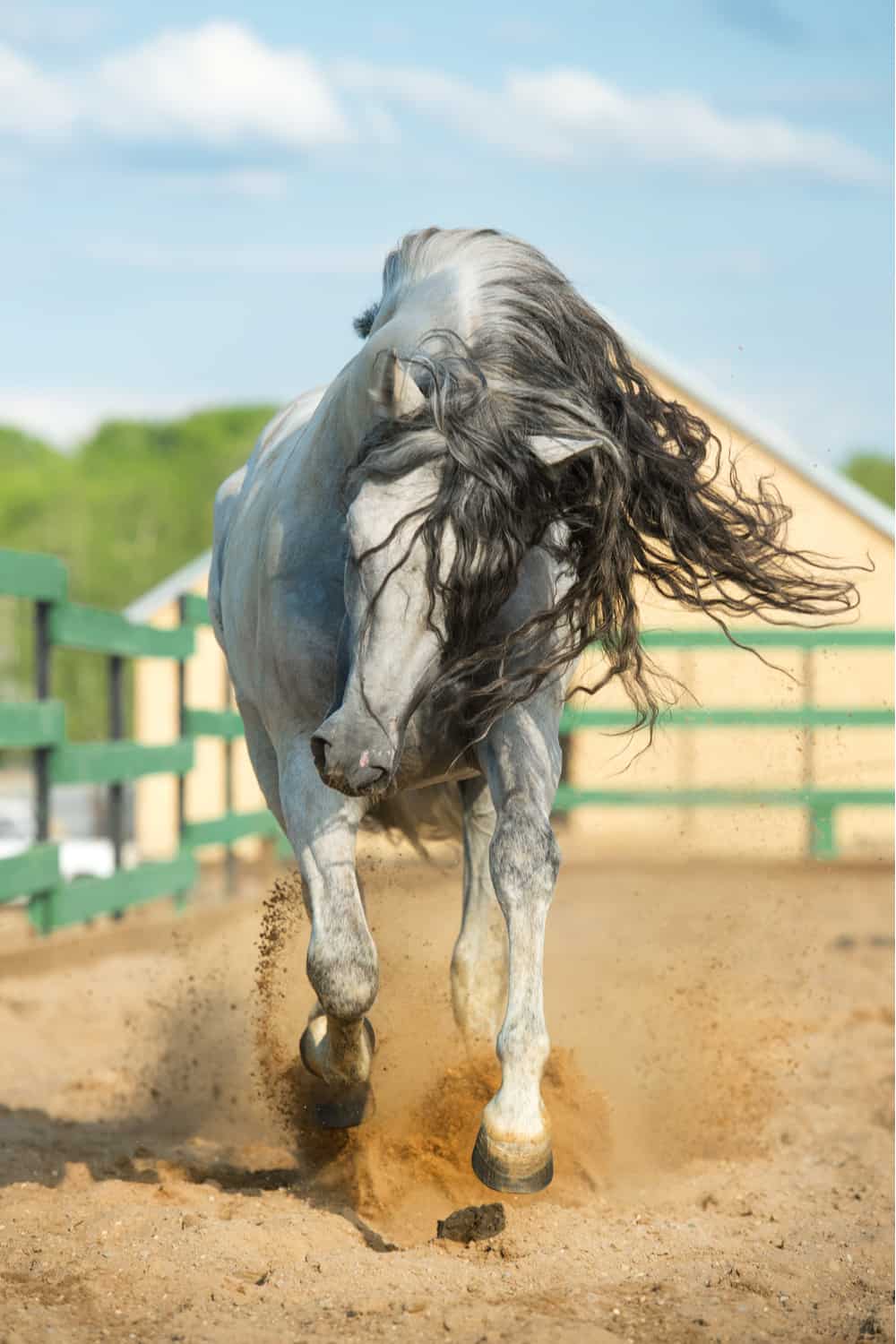 The Andalusian horse hales from the Iberian peninsula. It’s also known as the Pure Spanish Horse or PRE, after the same phrase in Spanish.

They are known for both their high energy levels and their stamina. They have a life expectancy of around 25 years.

The Andalusian has an illustrious history, having been the preferred mounts of kings and nobles. The English king Henry VIII and the French emperors Louis XIII and Louis XIV all rode Andalusians.

The horse is found in bay, gray and mottled colors. But it was the striking white Andalusians that were once used by the Spanish government as a tool for diplomacy. Both the horses themselves and the right to export them was granted as patronage to favored citizens.

Today, selective breeding has made them a desirable horse for dressage events in particular. As with other breeds, the precise price you’ll pay will depend on the pedigree and record of the individual horse. 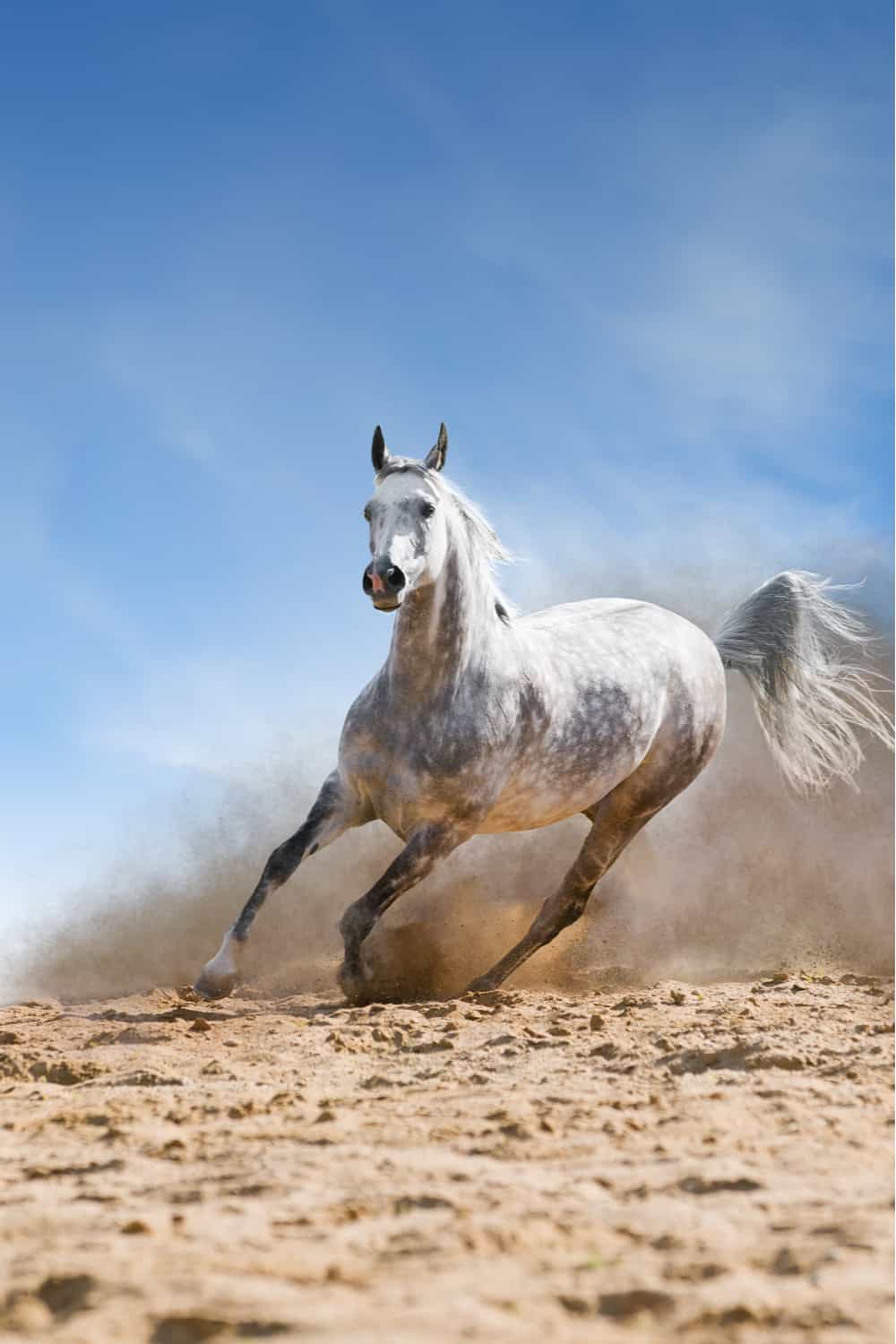 Arabian horses are the kings of endurance racing, known for their exceptional stamina. The breed was developed in the Middle East, and is able to survive harsh desert conditions with minimal food and water.

Though not as fast as a Thoroughbred over shorter distances, Arabians are difficult to beat in endurance races. They also have the longest running distance of any breed, at around 2.5 miles. In comparison, Thoroughbreds and Quarters can maintain a running pace for only 2 miles.

As such, a trained and race-ready Arabian is a very expensive proposition. You can expect to pay well in advance of $50,000 for such a horse.

In the 1980s, Arabians were even seen as commodities for investment. Prices rocketed as a result, but in many cases welfare standards plummeted. The boom came to an end – no doubt good news for the horses themselves.

In 1982, a Dutch-born stallion called Padron broke records by being syndicated for $11 million. And more recently, Pepita, Poland’s National Champion Senior Mare, sold for $1.6million. Pepita’s value is twofold – both as a competitor, and as a broodmare capable of producing champion offspring. 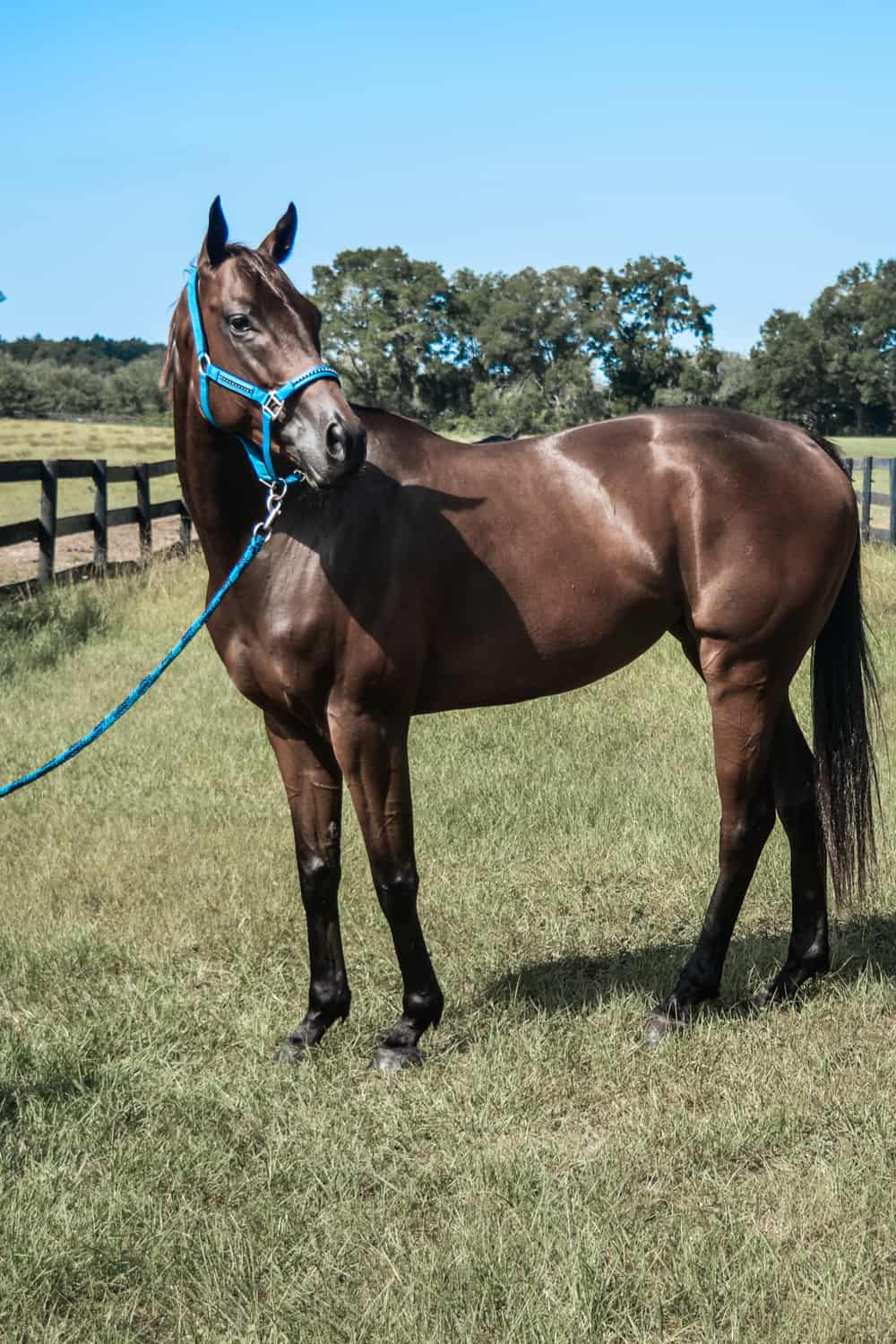 Thoroughbreds were bred in England for horse racing. They’re known for their agility, spirit and speed, and they’re amongst the fastest of all horses. They’re especially impressive over shorter distances, so a high-performing Thoroughbred can be very lucrative in terms of prize money.

That’s reflected in the prices achieved by this breed. In fact, the most expensive horse ever sold was the Thoroughbred Fusaichi Pegasus. The horse, the winner of the 2000 Kentucky Derby, reportedly changed hands for a cool $70 million.

But even excellent breeding is no guarantee that an untested horse will excel on the racetrack. The Green Monkey seemed set for success with his illustrious parentage of Secretariat and Northern Dancer. In 2006, buyers bet big on his performance, paying $16 million at auction for the horse.

Unfortunately, his excellent genes didn’t translate to racing wins. And sadly, he wasn’t successful at stud either. It was a reminder that there are no guarantees in the world of sport. 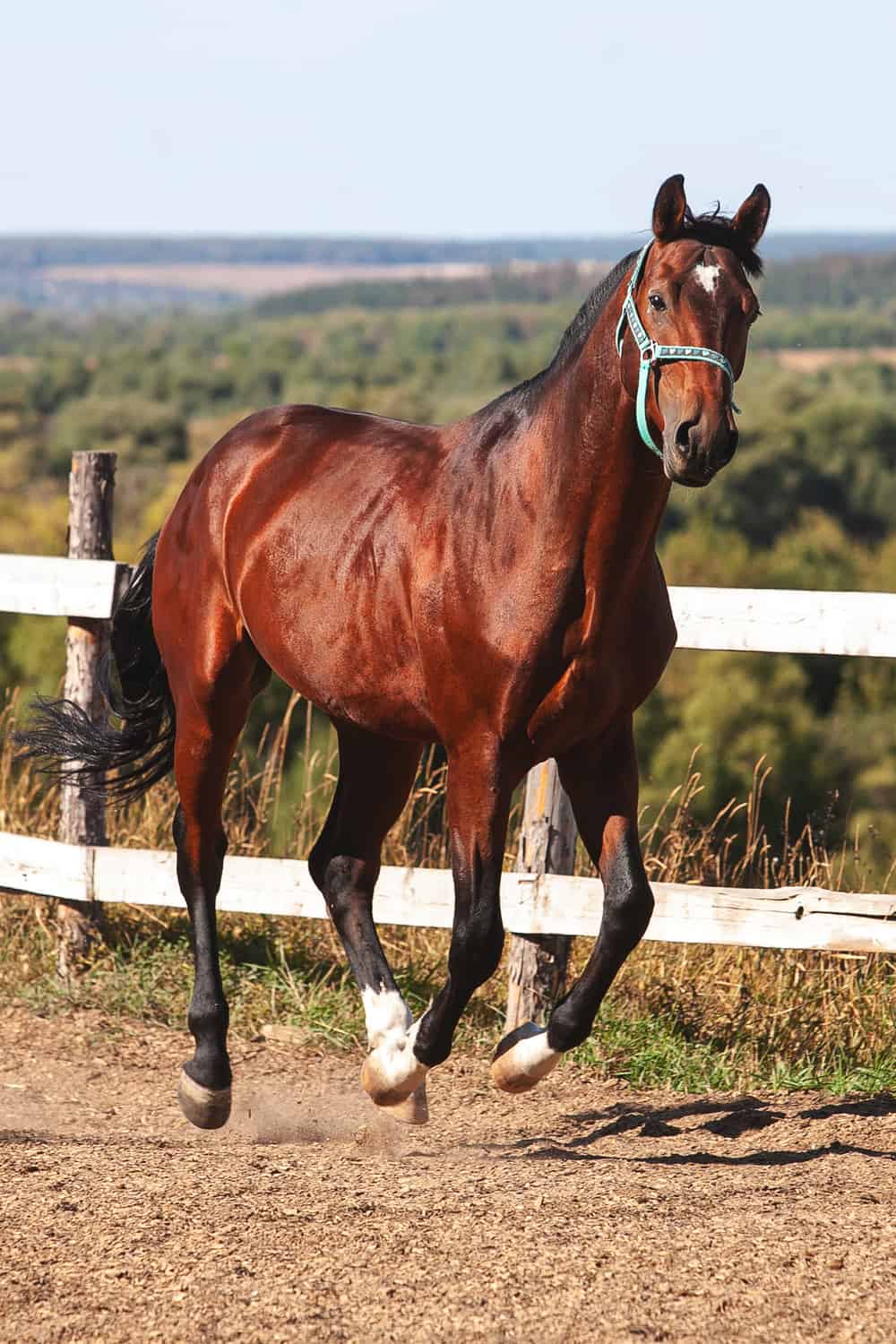 The Holsteiner takes its name from its region of origin, Schleswig-Holstein in Germany. It emerged as a breed in the 13th century, making it the oldest of the warmblood breeds.

The first breeders appear to have been monks, seeking to develop native horses into larger animals. These new, bigger horses were more suitable for warfare. They quickly became popular with both monarchs and military forces across Europe.

Holsteiners have an average lifespan of between 35 and 40 years. They are most often bays, and have an elegant form with a graceful neck.  They’re great as working animals on ranches. But they’re particularly suited to dressage, eventing and show jumping, and are often used in Olympic events.

It’s therefore perhaps unsurprising that Holsteiners can command premium prices. They range anywhere from $3,000 to $50,000, depending on the lineage and performance record of the horse. 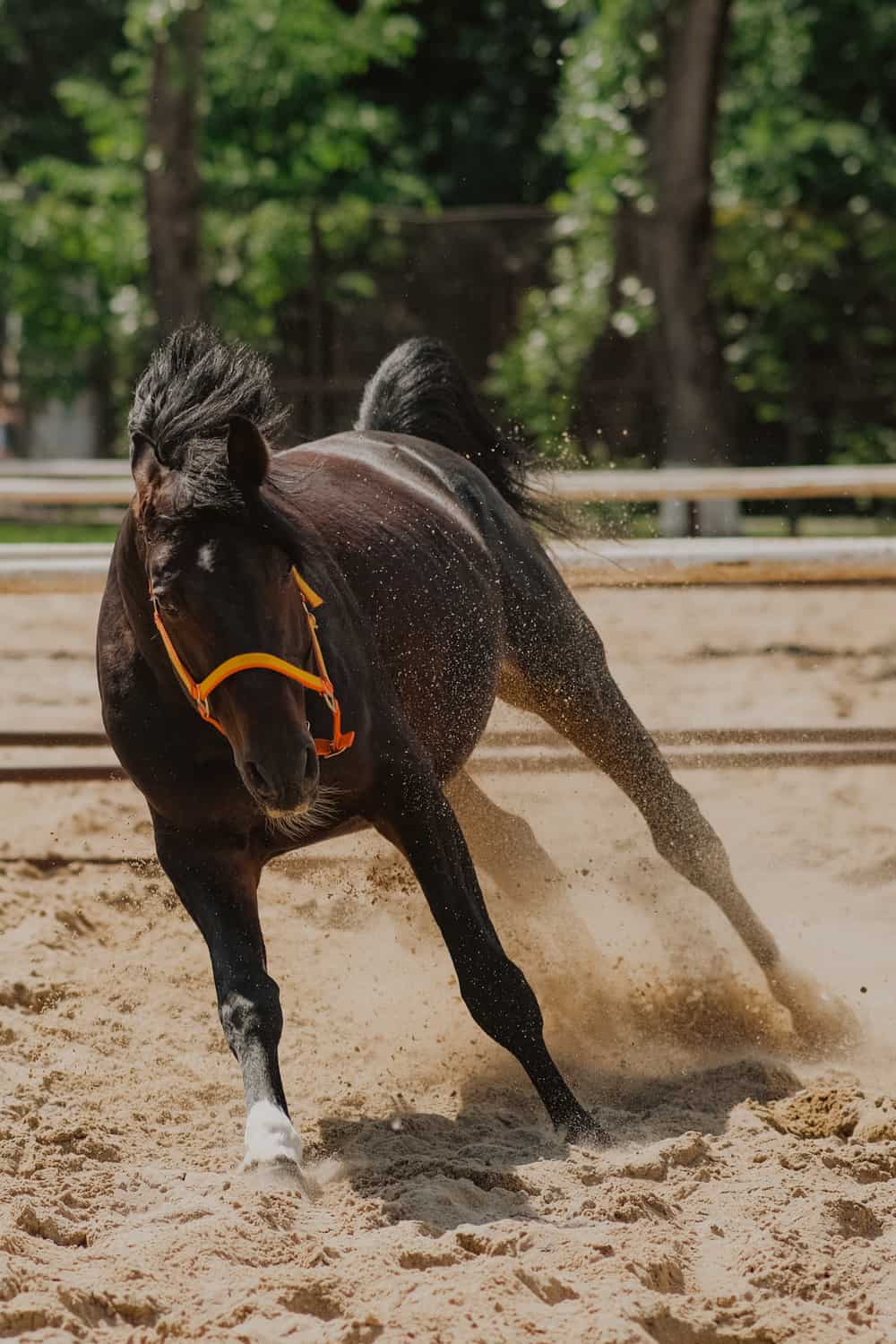 Like the Holsteiner, the Hanoverian originates from Germany, and it’s one of the oldest of the warmblood breeds. The horses have seen considerable success as Olympic athletes, winning gold medals in dressage, show jumping and eventing.

The breed was first used mostly as a cavalry horse. But over time, Thoroughbreds were introduced into the bloodlines, developing a horse of a lighter build. This new, more agile Hanoverian was also easy to train. All these characteristics meant it was destined to become a winning competitor.

Hanoverians are the most successful of all breeds at dressage. Famous dressage champions including Satchmo 78, Salinero and Sunrise were all Hanoverian horses. And since 1966, the breed has been represented in eight gold medal winning teams at the World Equestrian Games.

You can expect to pay anywhere between $7,000 and $100,000 for a Hanoverian horse. And performance-trained horses with a good pedigree will command a premium. 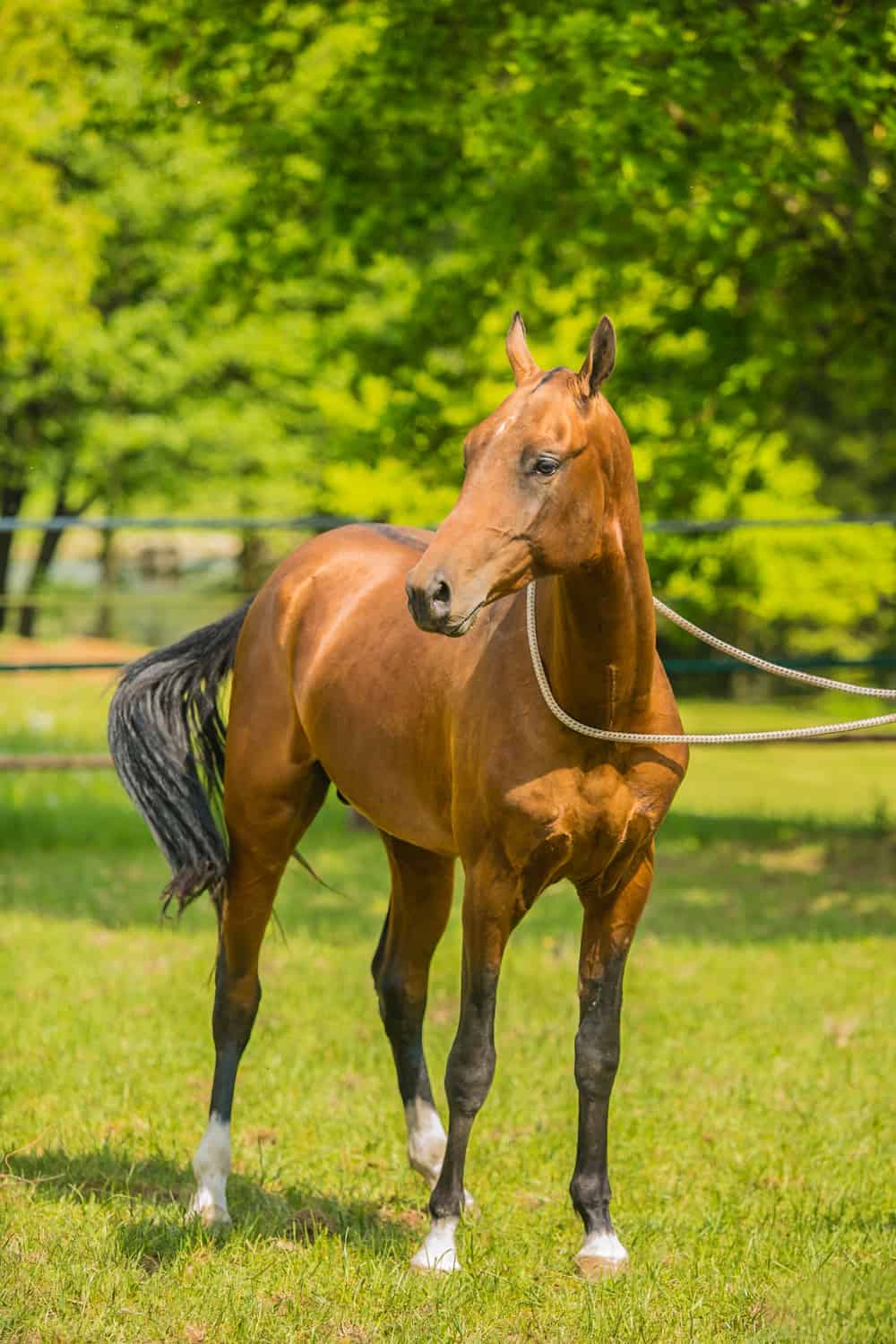 It may be no surprise to find the Akhal-Teke on a list of the world’s most expensive horses. After all, they are known as the “golden horse”.

The name comes from the striking metallic sheen on their coat. The breed originated in the deserts of Turkmenistan, and some believe that their distinctive coloring served as camouflage in the sands.

The desert environment also helped the Akhal-Teke develop their characteristic stamina and ability to survive in harsh conditions. That also makes them “easy keepers”, able to survive with relatively little food and water.

They were first used in raids by the tribesmen of the area. But selective breeding developed their jumping capabilities, and they are now renowned as graceful show jumpers.

There are currently between 6,000 and 7,000 Akhal-Tekes in the world, most still in Turkmenistan. Their comparative rarity means you’ll need to be prepared to spend a significant sum to own one.

If you want to do so, the price – as always – will depend on the heritage and training of the horse. But a purebred and fully trained Akhal-Teke may set you back as much as $100,000. 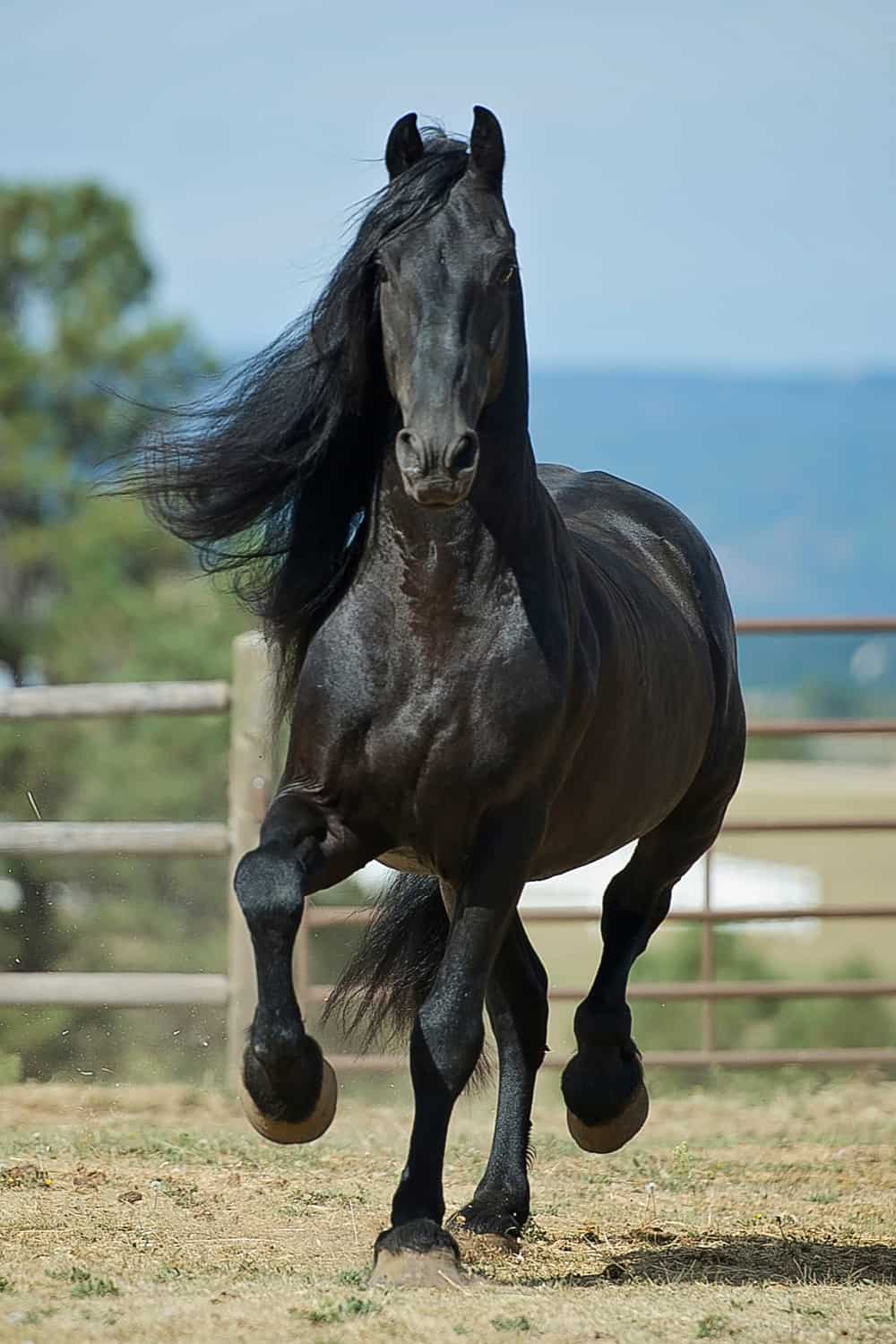 The Friesian is an ancient breed, dating back to as early as the 11th century. It originated in the Friesland region of the Netherlands, from where it takes its name.

The horses’ power and agility saw them used in many battles. Breeding over the centuries has seen the modern Friesian grown in stature, and a mature adult now averages around 15.3 hands. But despite being a muscular horse, they are also nimble and athletic.

Most Friesians are solid black, although there are occasional bay and chestnut examples too. Their necks are long and arched, their ears short, and their shoulders powerful. Their manes and tails are long and thick, and the feathers on their fetlocks are left untrimmed.

They are prized as carriage horses, and are increasingly seeing success in dressage competitions. In temperament, they are willing and energetic, but also gentle. Friesians used for sports are finer boned than the classical Baroque Friesian. Both types may, however, be found in show rings today.

There is considerable variation in the price you can expect to pay for a Friesian. Individual horses can cost anything from $7,000 to $100,000. 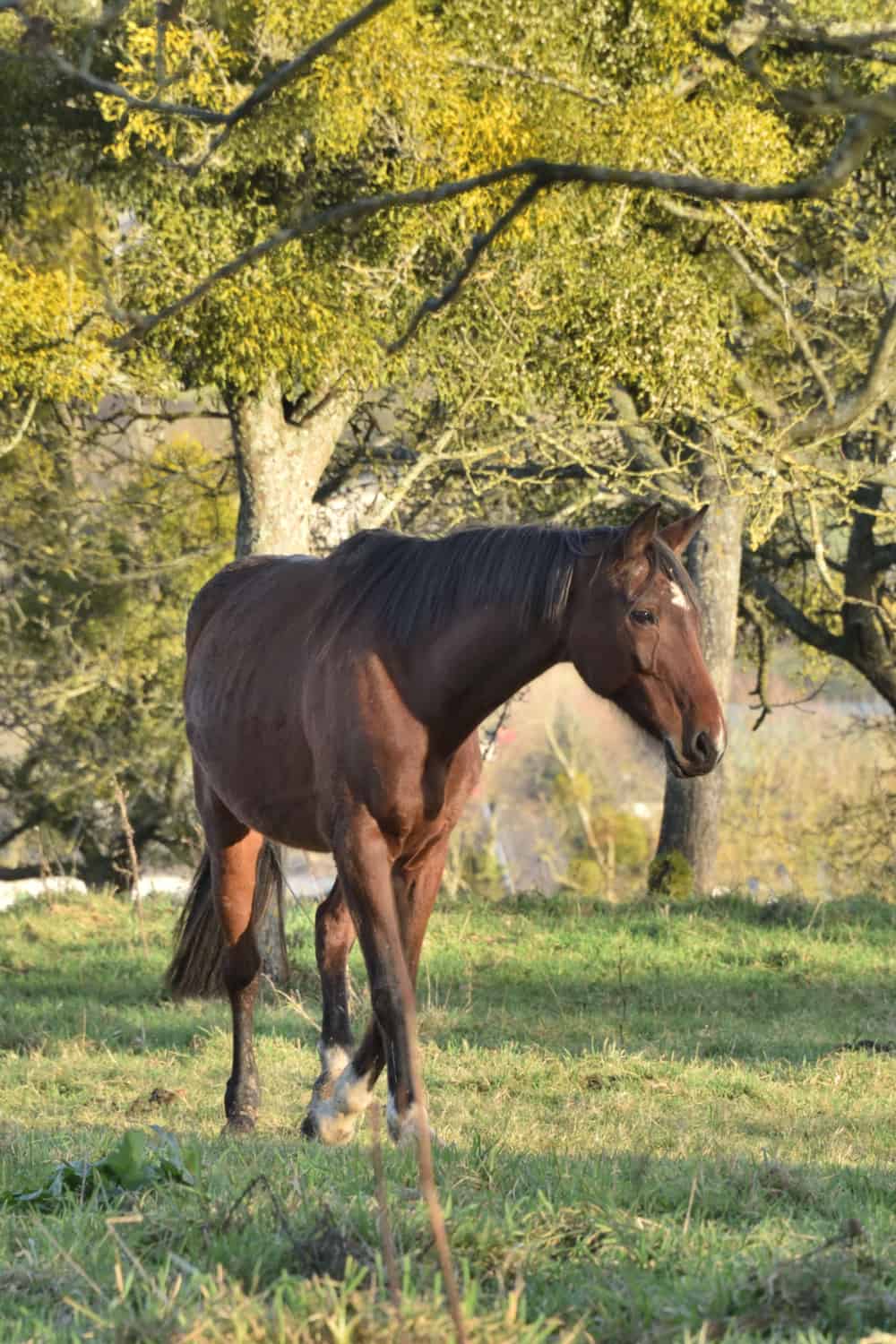 The Selle Francais only gained recognition as a distinct breed in 1958. It originated in France, and was the result of the merger of several pre-existing French breeds. Since then, it has become one of the world’s most desirable equine breeds.

It’s most usually chestnut or bay in color, and is an athletic horse. It’s seen success in show jumping, dressage and eventing. And you can also find Selle Francais in trail riding contests and equestrian vaulting.

One of the most successful studs in the history of show jumping was a Selle Francais called Almé Z. He sired the World Cup winner I Love You, and Galoubet A, who was part of the gold medal winning team at the 1982 World Championships.

Four Selle Francais constituted the winners of the three-day eventing competition at the 2004 Olympics. And another Selle Francais, Nino de Boussinets, won individual gold at the Olympics in 2012.

With records like these, it’s not surprising that prices for Selle Francais can be very high. You can expect to pay upwards of $15,000, with individual horses carrying seven-figure price tags. In 2013, the champion Palloubet d’Halong was sold for a reputed $15 million. 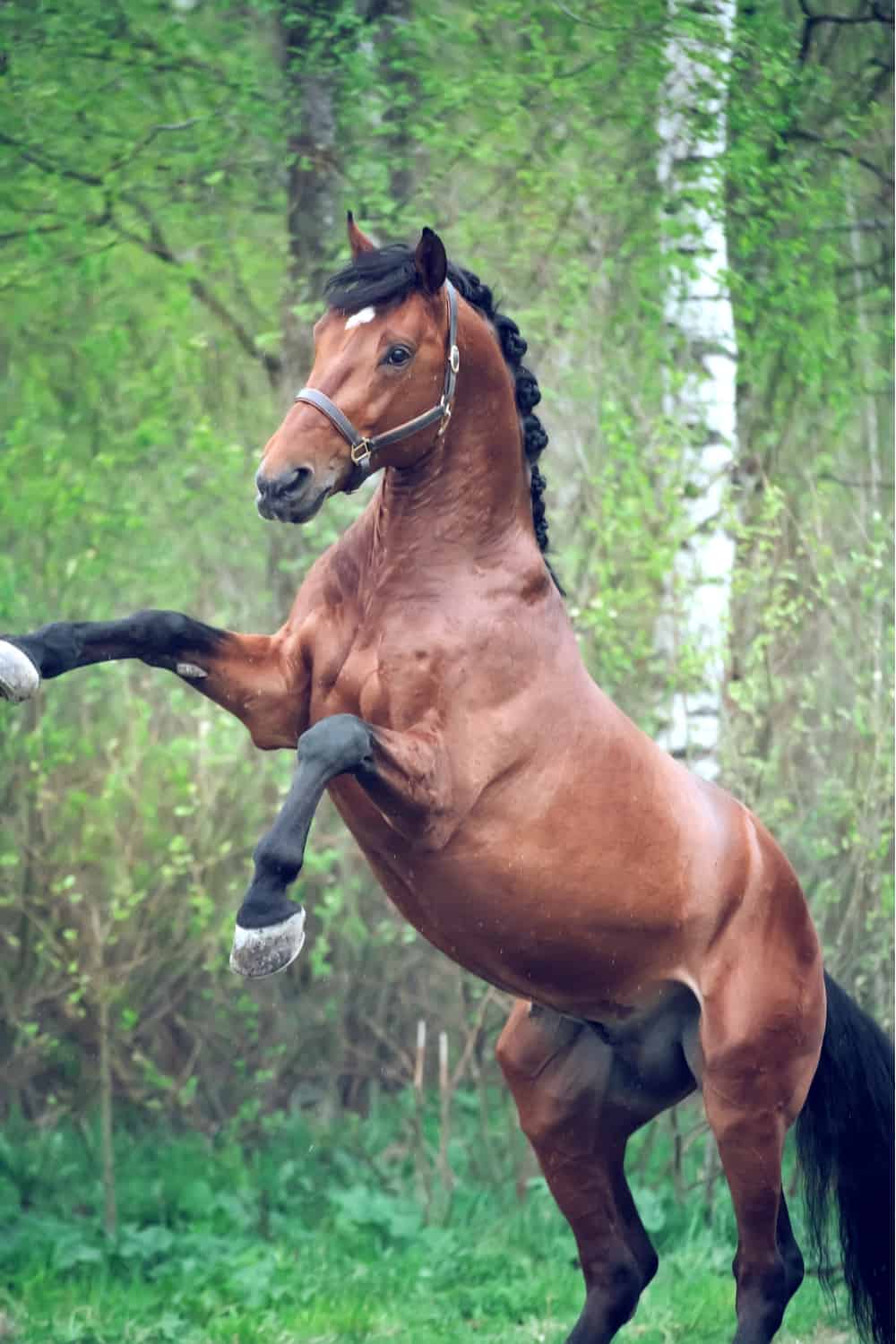 The Oldenburg, also known as the Oldenburger, is named after the German aristocrat Count Graf Anton Gunther von Oldenburg.

It hales from Lower Saxony in Germay, and its ancestors were carriage and farm horses. Today, selective breeding has seen it develop into a renowned sports horse, known for its excellent gait and superlative jumping ability.

Unlike many other breeds, a wide range of colors and pedigrees are accepted for registration. The primary consideration is the ability of the horses in dressage and jumping. Choose an Oldenburg, then, and the chances are you’ll have a horse that’s primed for success in competitive events.

At the 2021 May Oldenburg Foal auctions, the average price of an Oldenburg foal was $12,500. Elite broodmares and riding horses usually start at around $100,000.

Some breeds are more expensive than others…

As we’ve seen from our list of the 10 most expensive horse breeds, some equine breeds are considerably more costly than others. But more than the breed, it’s the lineage and record of individual horses that determine their price.

But remember – a horse’s heritage can’t guarantee it will share its ancestors’ success on the track or in the ring. Some seven-figure sales haven’t led to oodles of prize money, nor to broods of star progeny!

However much we pay for a horse, these beautiful creatures can bring joy and love into our lives. And that, after all, is something money can’t buy.