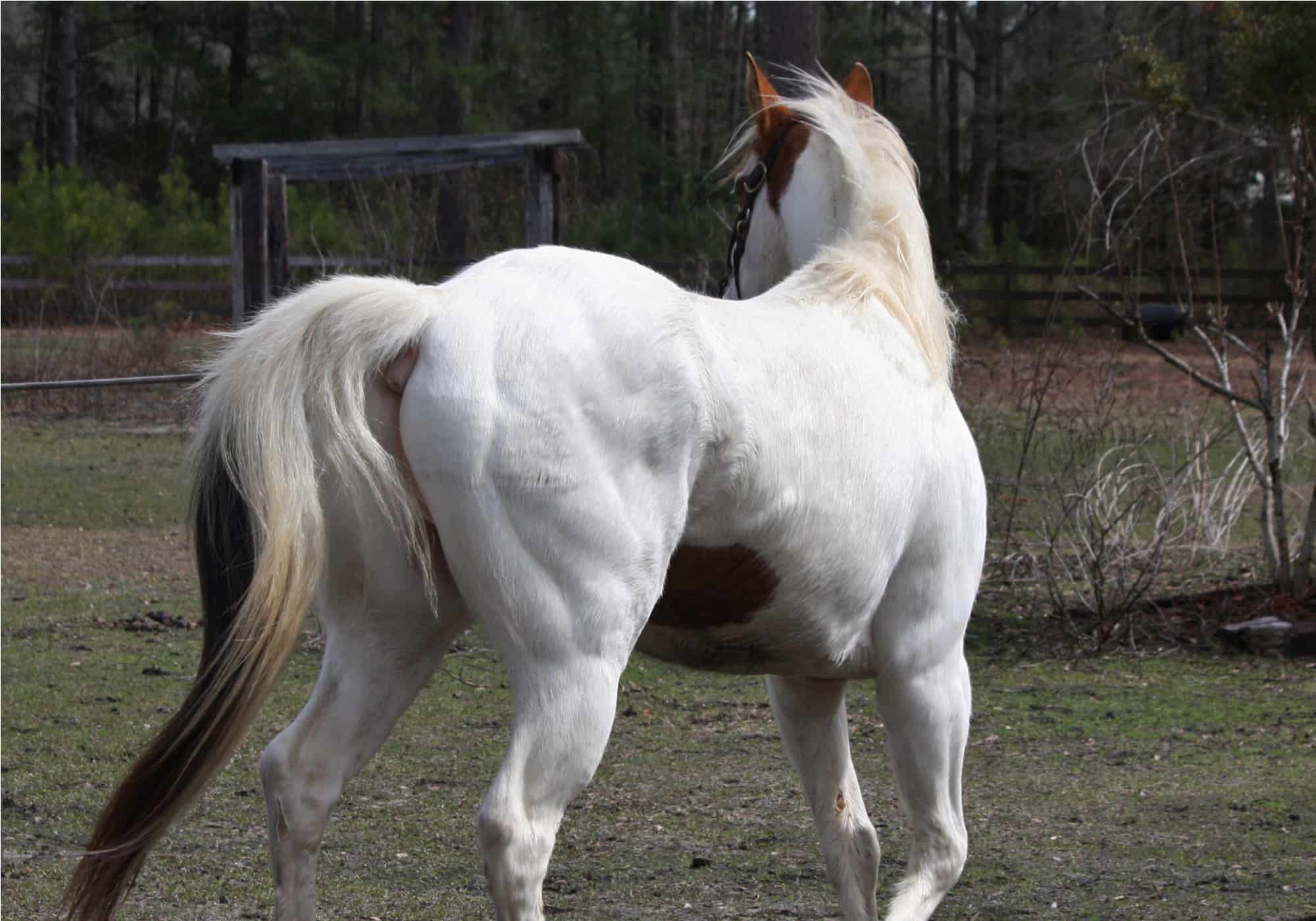 Technically, a medicine hat horse is a pinto horse. Pintos are horses characterized by alternations of white and dark patches on the coat. Like all pinto horses, medicine hat horses are patched. However, their only dark spots are sparse and generally only located on the head and ears. 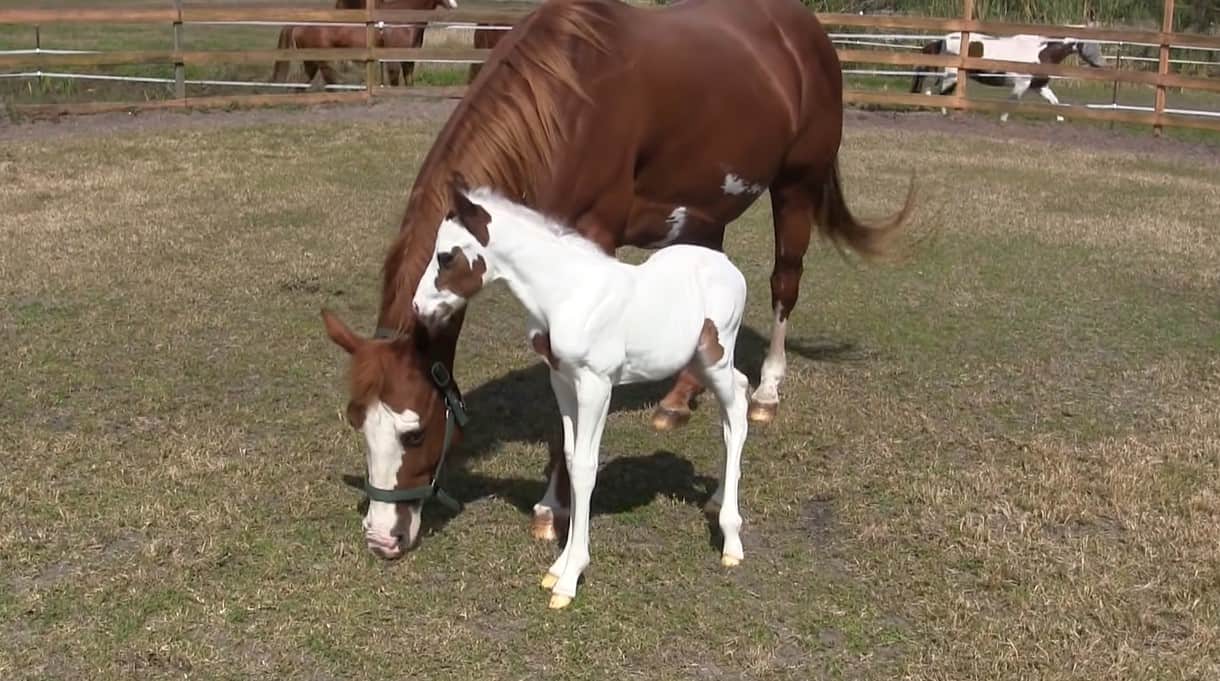 Medicine hat horses, as their name implies, are horses displaying a specific – and rare – color pattern.

From a technical point of view, medicine hat horses display a tovero coloration mix, which is a blend between the tobiano and overo patterns of pinto horses.

What Is Tovero Pattern?

Tovero refers to pinto horses that display a mix of tobiano and overo patterns.

Tobiano is a spotted pattern produced by a dominant gene. These horses have a dark base color with patches of white hair and pink skin. Regardless of the pattern disposition, all tobiano horses share certain characteristics, including:

Overo includes several patterns of white-over-dark coat markings, including frame overo, which is the most common.

Frame overo horses appear to be solid-color but generally have a white mask and irregular white patches present in a horizontal orientation. Most markings have a jagged shape, as opposed to tovero’s round or oval shapes.

Many frame overo horses have blue eyes, a characteristic that can also be present in tovero – thus medicine hat – horses.

Tovero horses are pintos that display the characteristics of both tobiano and overo patterns. For example, a tovero horse could have blue eyes and irregular facial markings characteristics to overo but display round or oval patches on the body and a tobiano arrangement of the white.

Medicine hat horses have overo markings on the head and are predominantly white. Any present markings have well-defined edges and are mostly round or oval.

Medicine hat horses can have any color present in pinto horses, including black, chestnut, brown, palomino, roan, grey, or yellow. However, the predominant color is white, a trait that makes these horses extremely rare.

In general, medicine hat horses are intelligent and easy to train. Most get along well with other horses, as well as other pets or animals.

Since there is no breed, there are no specific standards either when it comes to medicine hat horses. However, they are classified into standard, pony, or miniature categories. 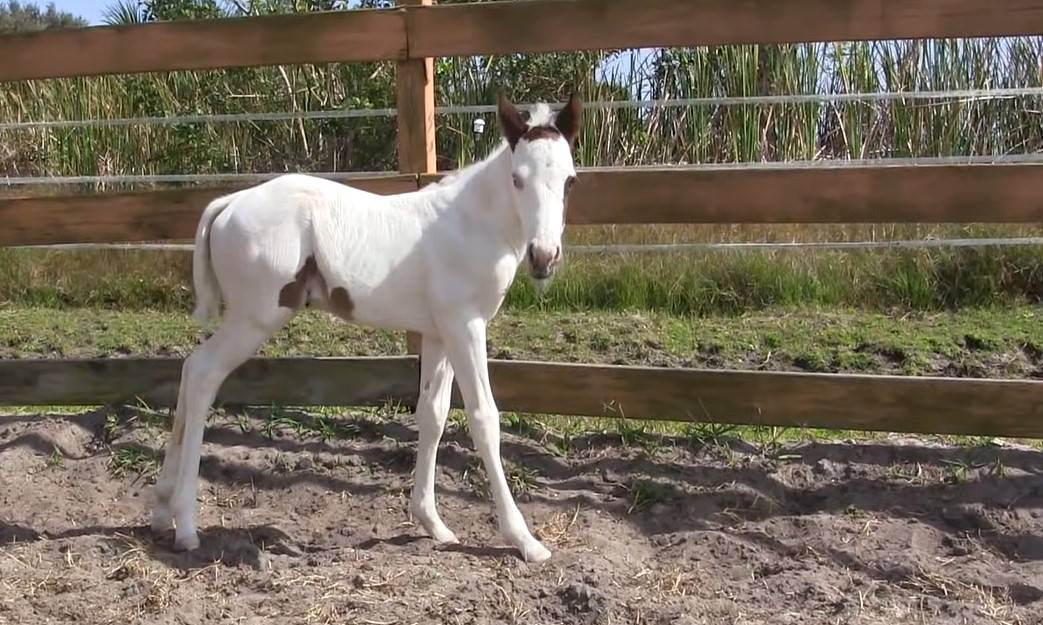 Because of their rarity, medicine hat horses were believed to have magical powers and that anyone riding such a horse could not be hurt. If one or both eyes were blue, the horse was believed to be even more powerful.

Most legends referring to medicine hat horses belong to the Native American culture. Indigenous people believed in the supernatural protection delivered by these horses. As such, they were often ridden by the so-called medicine men – the healers of the tribes.

The Medicine Man was a powerful figure in most indigenous tribes, acting as a healer and spiritual leader.

The Connection Between the Medicine Man and Medicine Hat Horses

Native American history speaks widely about the connection between a tribe’s healer and spiritual leader and the rare medicine hat horses.

It was believed that the healers often shared a supernatural connection with the animals and that the only type of horse they should have ridden was a medicine hat horse, also known as a war horse at the time.

The reason was simple. Most tribes believed that a medicine hat horse would protect the medicine man during battle, keeping him safe and helping him heal the others. At the same time, most tribes also believed that the man-horse duo could warn others of impending dangers.

To celebrate the special powers of medicine hat horses, most tribes used to paint symbols on the horse’s coat. Depending on the purpose – protection, victory, luck – the tribes utilized paints of different colors to paint specific symbols.

Indigenous tribes used different symbols to differentiate themselves from other tribes. However, some symbols painted on medicine hat horses were common between the tribes. Let’s find the meaning between the most common ones:

How Much Does a Medicine Hat Horse Cost?

At the low end of the spectrum, you can expect to pay around $3,800 for a miniature mare or around $5,000 for an American Paint filly. Stallions are generally more expensive, and horses that have been trained for racing or hunting will also generally cost more.

More expensive bloodlines, such as Thoroughbreds, can cost you $10,000 or more, depending on the horse’s lineage and performance.

One of the rarest types of pinto, medicine hat horses have long been considered magical creatures with supernatural abilities. Sure, we now know that those beliefs were nothing but legends, but nothing can take away the fact that winning a race while riding a medicine hat horse can give you a feeling of power.

The temperament and behavior of these horses can vary based on their breed. Like all pinto horses, medicine hats are generally low maintenance and easy to keep. Whether you want a horse for pleasure, show, or racing, a medicine hat horse could be the one for you.