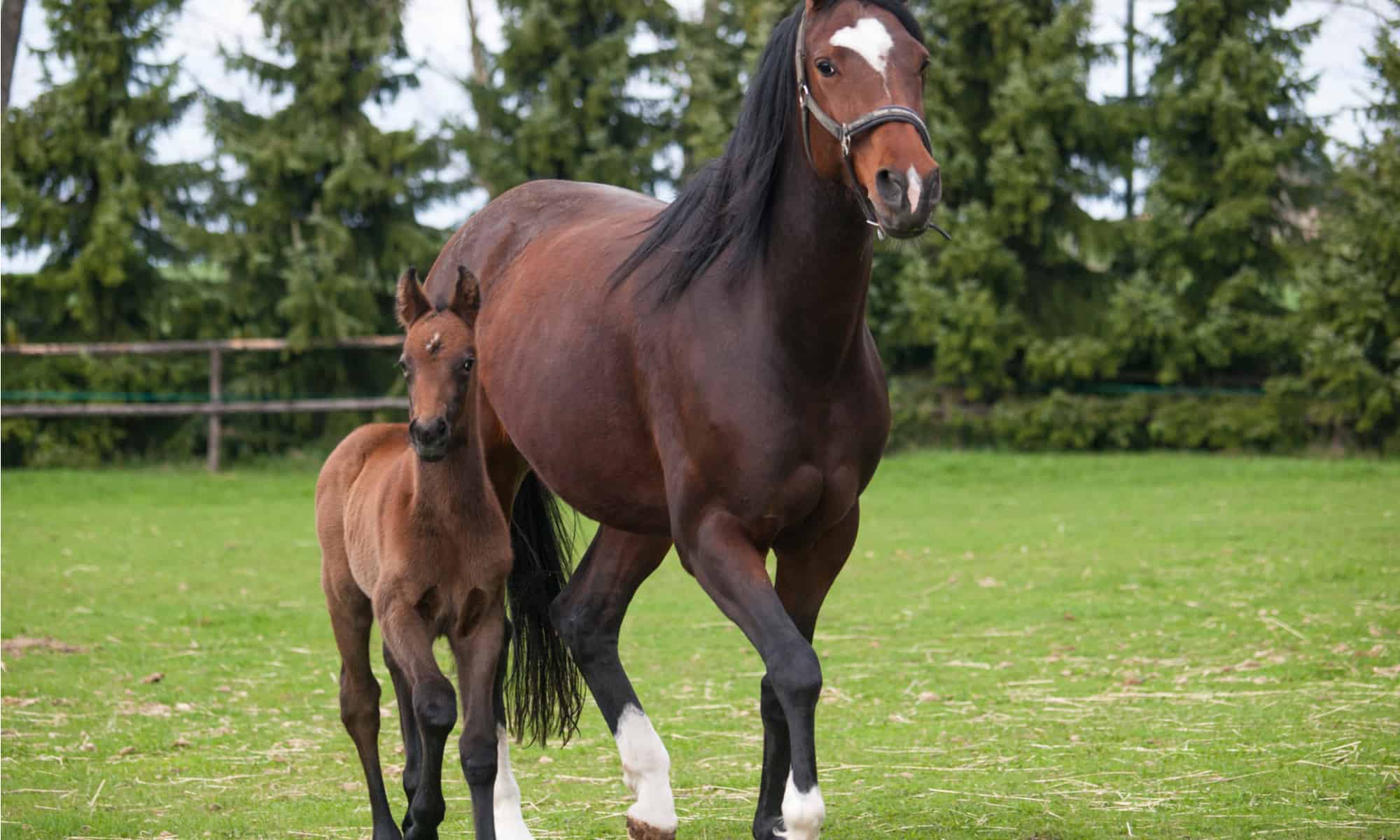 Horses are beautiful and proud animals, very precious to humans for various reasons. The common terminology related to these magnificent creatures is quite diverse. Therefore, it can be a little confusing for new equestrians to understand it properly.

The terms you will most frequently hear are a mare, stallion, and gelding. Each one of these names has a specific meaning related to the horse’s age and gender. For a start, let’s see what is a mare horse. 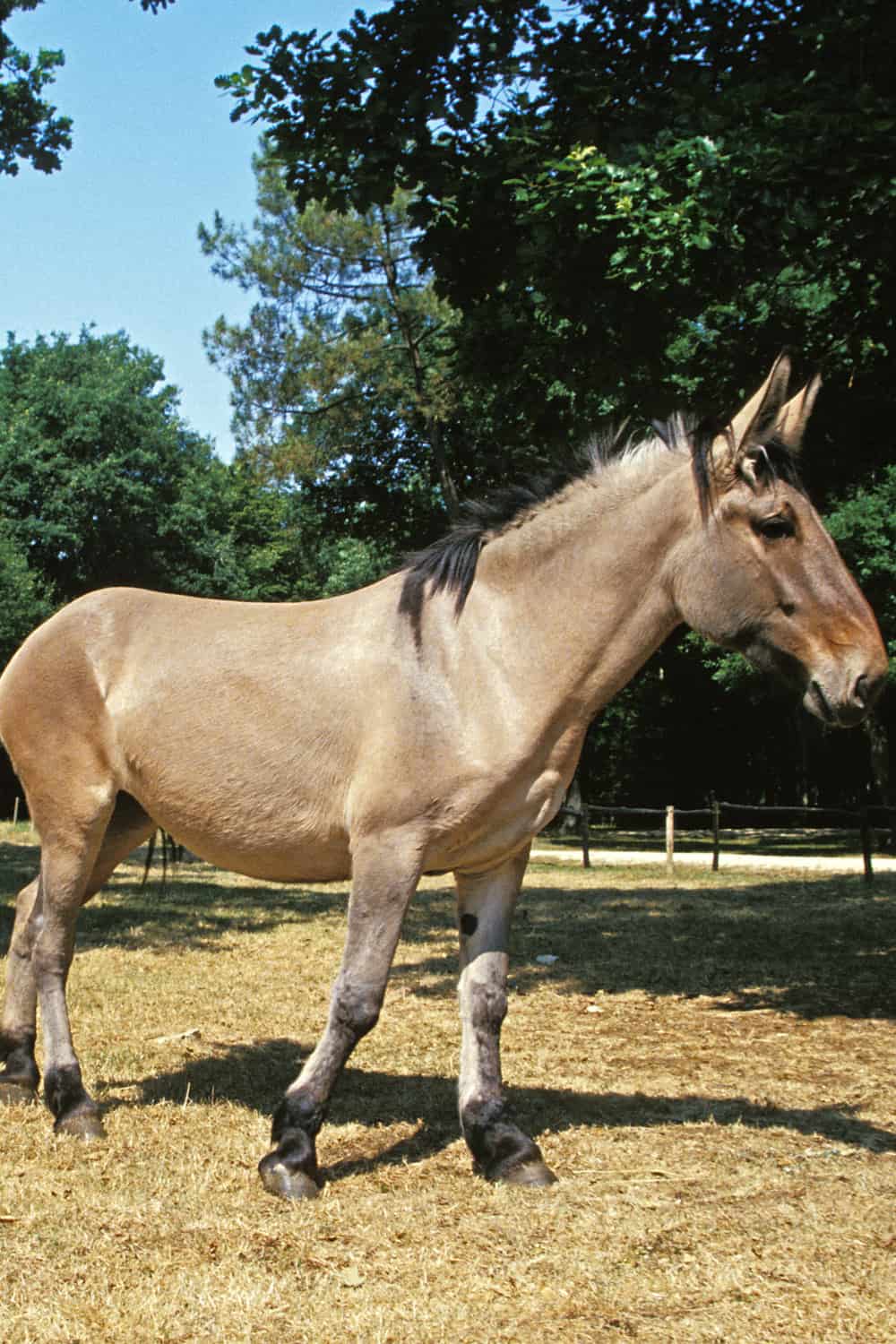 If you are new in the horse world, it may seem irrelevant to have so many different terms for a horse. When talking about horse breeding, the difference in name meaning for females is significant. Let’s take a look.

An adult female horse is a mare. This word can also refer to a female mule, zebra, sometimes to a donkey, and other equine species. The term is typical for a three- or more years old female horse.

In the US or the UK, people involved in racehorse breeding never use this term for a female horse younger than four years old. Sometimes, the term mare can be a general name for an adult, not spayed, female horse, no matter the age.

If you notice one of your mares acting bossy towards other horses, you have a herd’s boss (lead) mare. This female is the most dominant in the herd, and other members respect it.

Keep in mind that it is not necessarily the biggest female, but it is one of the oldest in the herd. However, it is often a wise and extremely confident horse.

In the wild, the boss mare’s role is to lead the herd while moving from place to place while the stallion guards the herd’s rear. When leading the herd, the boss mare looks for the best pastures and clean water, and it always drinks and eats first.

Its dominant behavior is instinct, and you should never try to discourage it. What’s more, you should try to earn its respect and trust. It won’t be easy at first, but it will make it more practical for you to handle it and the rest of the herd.

Another widespread term for a female horse is a broodmare. It is a female horse used for breeding purposes. It is common for a mare to earn this title after giving birth to the first foal.

Female horses enter the age of sexual maturity when they are around two years old. However, reputable breeders usually avoid breeding such young animals. Most horse owners prefer mares breeding once their bodies are fully developed at approximately four or five years old.

Broodmares are capable of healthy reproduction until they are around the age of twenty. In other words, a broodmare is usually a mare between the age of four and twenty.

The broodmare is sometimes a synonym for a dam, the horse that has already given birth to at least one foal. In such a case, the father is defined as a sire. These terms are most common in Thoroughbred horse breeding.

In such a case, it is crucial to determine a horse’s dam and sire precisely as a part of a horse’s pedigree. They define each horse’s origin and qualities. As you can guess, the better the dam and sire, the more quality the offspring will be.

Mares often form strong bonds with their owner or rider. They prefer to bond with one person rather than with a few different riders. Working with these female horses is almost always more convenient than working with stallions.

They are less aggressive due to the lack of testosterone, a male hormone that makes stallions aggressive. Therefore, mares are more approachable and react better to training. 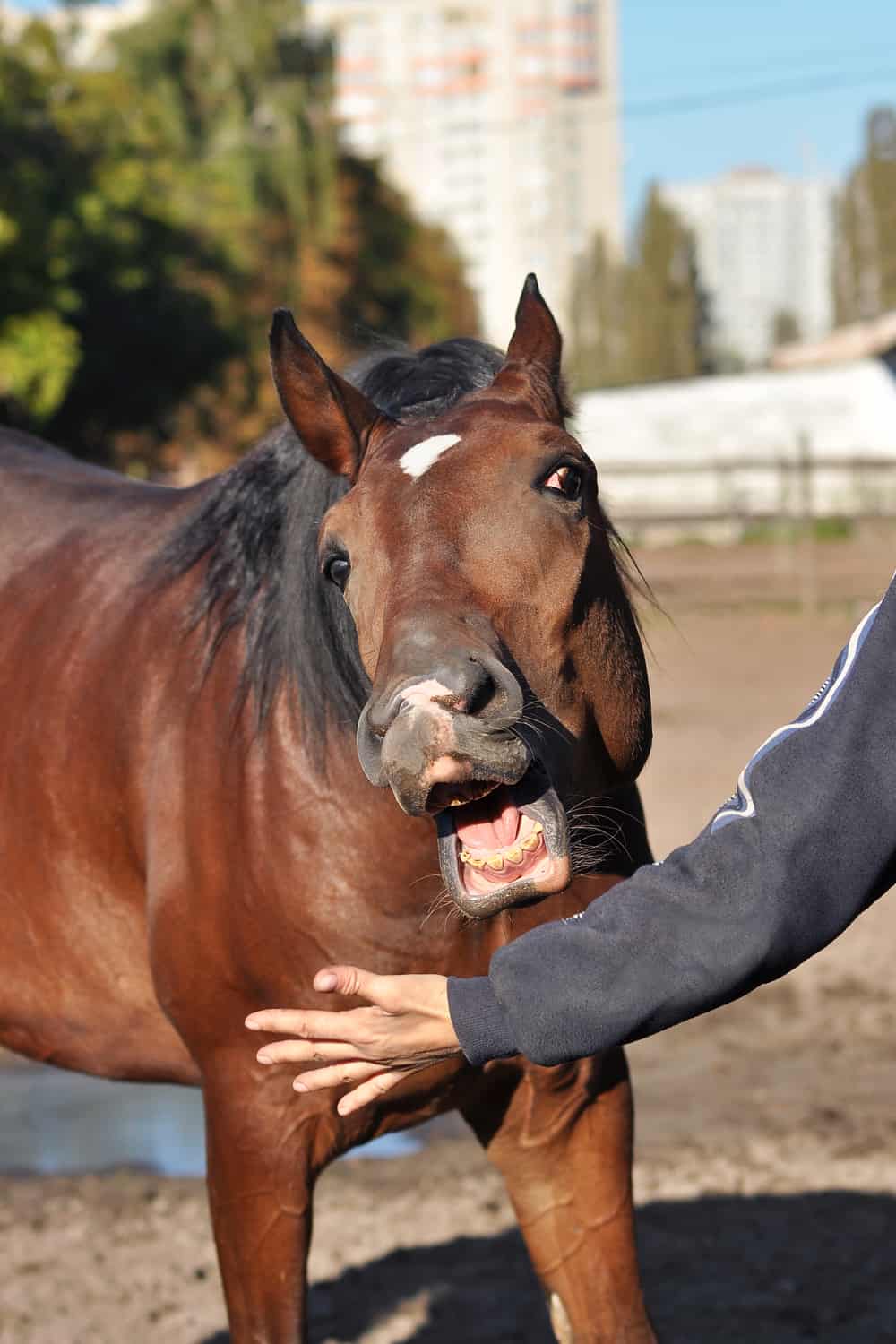 You should expect your mare to have mood swings in certain stages of their estrus (reproductive) cycle. Their heat time (estrus) happens every nineteen to twenty-two days, from early spring to autumn.

The mood swings are particularly extreme in the spring. It is a natural time for horse reproduction so that it is a period when mares are highly hormonal.

When in heat, mares’ sexual urges can distract them, although still not as much as stallions. During that time, mares often seem nervous, cranky, unwilling, and generally more challenging to handle than usual, especially if there are stallions.

That is a reason why some breeders prefer geldings (castrated male horses) rather than mares. The lesser hormone concentration makes geldings more obedient than both mares and stallions.

Still, horse owners can minimize the hormonal influence on mares’ behavior with the appropriate training. That is why they are a safer choice for children and inexperienced riders. In most cases, mood swings are usually not dangerous for horse riders.

There is an exception you need to pay attention to. When a mare that normally behaves well starts acting too aggressive or significantly changes its personality, it is often a sign of a health problem. In situations like that, the wisest choice is to consult a vet. 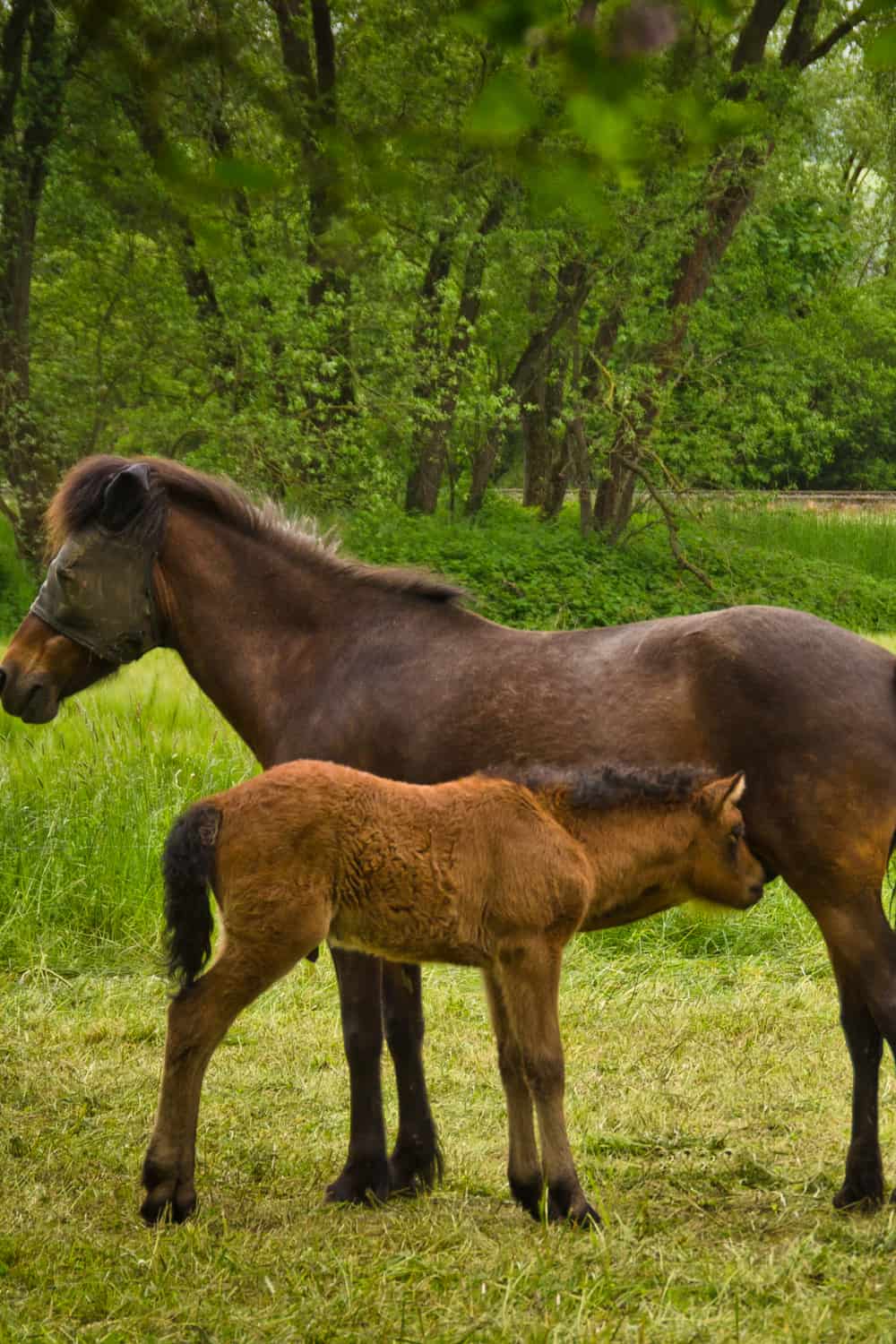 The mare (broodmare) develops affection towards her foal (baby horse) in the first few hours after its birth. It is typical for the female horse to bear a single foal during one pregnancy, and that only makes the bond between the mother horse and its baby stronger.

Most owners don’t use mares for riding or other work as long as they nurse their foals. No one can deal with a nervous mare that suffers because of separating from its foal. 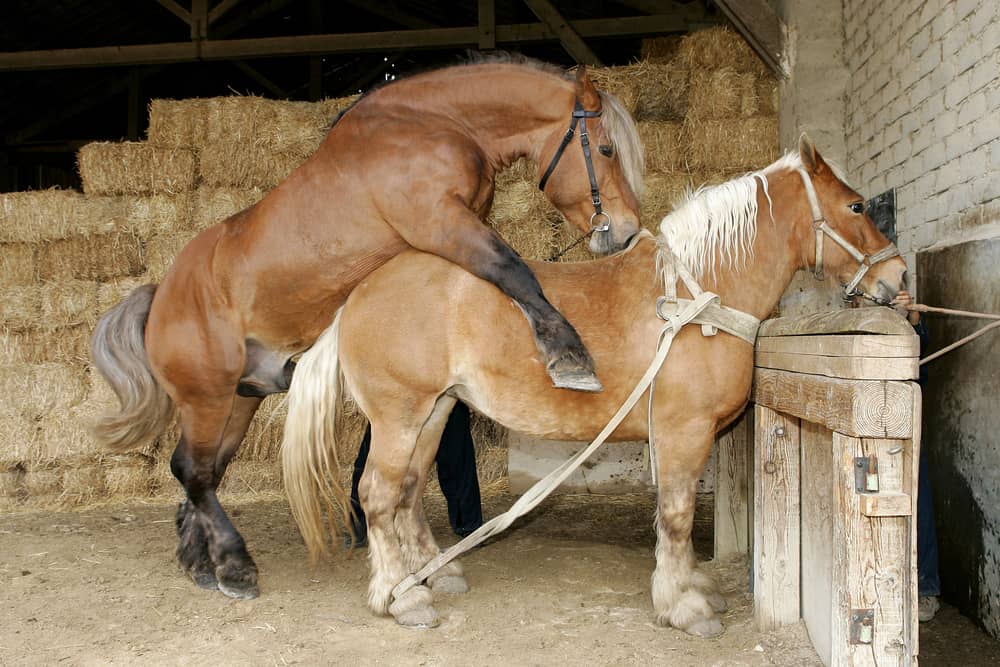 Horse owners use healthy and strong female horses for breeding to get offspring that possess the same qualities. The horse pregnancy lasts for about eleven months, meaning that a single mare can give birth to one foal per year.

Some owners breed their mares every year, while others choose to do that every few years. In the meantime, they use these horses for riding or as draft animals.

You should neither ride a mare nor use it for work from the six months of pregnancy until it stops nursing.

Sometimes, the owner decides to spay their mares. It is a complicated surgical procedure used for removing ovaries. Hormones affect mares less after going through this process.

Basically, there is usually no need for sterilizing mares since it is a too serious surgical procedure that doesn’t make a big difference in their behavior. Unlike non-castrated stallions that are often dangerous for riding, mares are usually calm by nature.

Mares are helpful to humans in many ways. People mainly use them for riding since their peaceful nature makes them great riding companions. Mares are especially practical for those who still learn to ride.

Sometimes horse owners keep fine mares exclusively for breeding. They assess their qualities and achievements in races. The rule of thumb is that offspring will be exceptional if their moms are remarkable.

Mares also make for excellent draft animals, and farmers often use them for farm work. Plus, they are capable of carrying large cargo.

Horse racing and other equestrian sports are fun for horse lovers and a place for horses to show their qualities. Mares can compete side-by-side with stallions in most disciplines, but they rarely race together.

Even though it is not common today, you can use a mare for milk. Some cultures, particularly nomads in Central Asia, drink horse milk or use it for making dairy products.

A traditional dairy product made of fermented mare milk is kumis. Believe it or not, it is even declared a Kyrgyzstan national drink.

Differences Between a Mare and Filly

Fillies are young female horses that are still not fully developed. Basically, the terms filly and mare refer to the same animal only in different life stages. The age line when a filly becomes a mare is not the same in every country.

Most breeders consider a filly to become a mare when it is three, four, or five years old, mostly depending on the tradition in their countries. Others believe a filly becomes a mare when it is capable of breeding and giving birth to a foal for the first time, no matter the age.

Difference Between a Mare and Stallion

A stallion is a term used for uncastrated adult male horses that pair with mares for breeding.

Unlike animals like lions and lionesses with the visible difference between males and females, it can be more challenging to tell apart female and male horses. In such a case, there are no distinctive features you can immediately spot.

Mares are typically smaller than stallions, but it is not a rule. Besides, mares usually have slightly thinner necks than male horses. On the other hand, stallions are a bit more muscular but not enough to have a significant physical advantage compared to females.

The quickest way to tell whether a horse is a mare or a stallion is to look at its genitals. Finally, you can also look for nipples under females’ bellies.

In the equestrian world, horses distinguishing based on their gender and age is a big deal. The word mare means a female horse that is fully developed and ready for breeding. It is always calmer than a male horse and more convenient for riding.