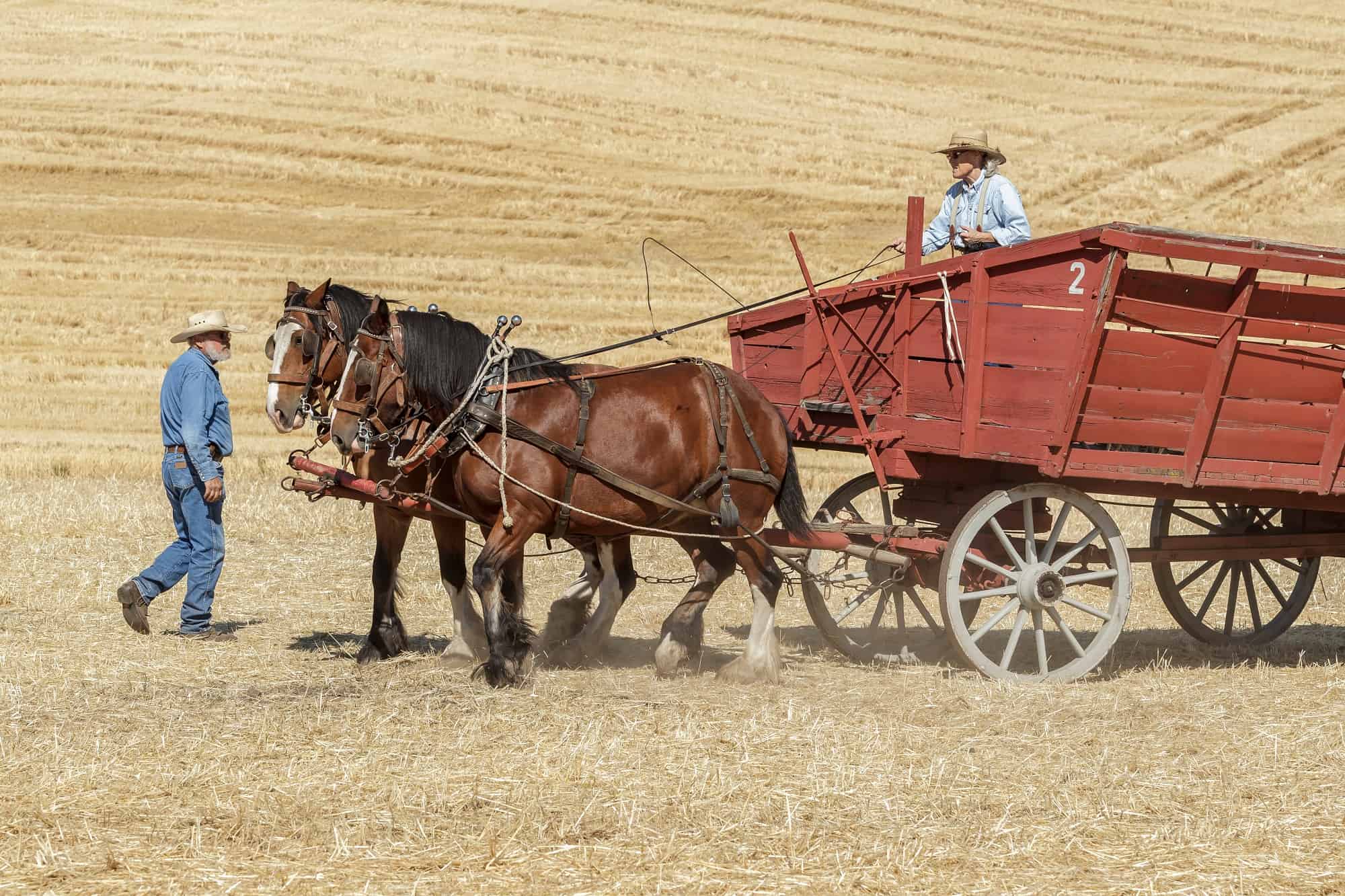 Draft horses are known for their power and strength, and for many years, humans have relied on them to pull wagons, farming equipment, military supplies, and other heavy loads.

But exactly how much can a draft horse pull?

Well, while the average riding horse can pull a load three times its body weight, drafts can haul up to fifteen times their weight.

However, there are several factors that determine how much load a horse can pull. We’ll look at those in a few but first, let’s tell you what a draft horse is and how much weight it can pull.

What Is a Draft Horse?

Also known as a heavy horse, the draft horse is a large cold-blooded equine commonly found in Europe and North America. Different types of drafts graced farms in the 19th century and at the beginning of the 20th century, helping humans with heavy tasks like plowing fields and pulling heavy loads.

Draft horses are tall, with heavy bones and plenty of muscle. Their back is short and their shoulders are more upright, which makes their shape and movement well-suited for pulling.

There are many breeds of horses that are categorized as draft horses. The most popular include:

Although these horses may vary in size and other traits, there are some important characteristics they all share that make them useful to man.

For instance, they are strong and patient, which makes them great workhorses. They are also sweet-tempered and have a natural willingness to learn, making them well-suited to a wide range of pursuits.

Whether used for pulling loads or pleasure riding, draft horses are wonderful companions and are preferred for their calm demeanor.

How Much Weight Can a Draft Horse Pull? 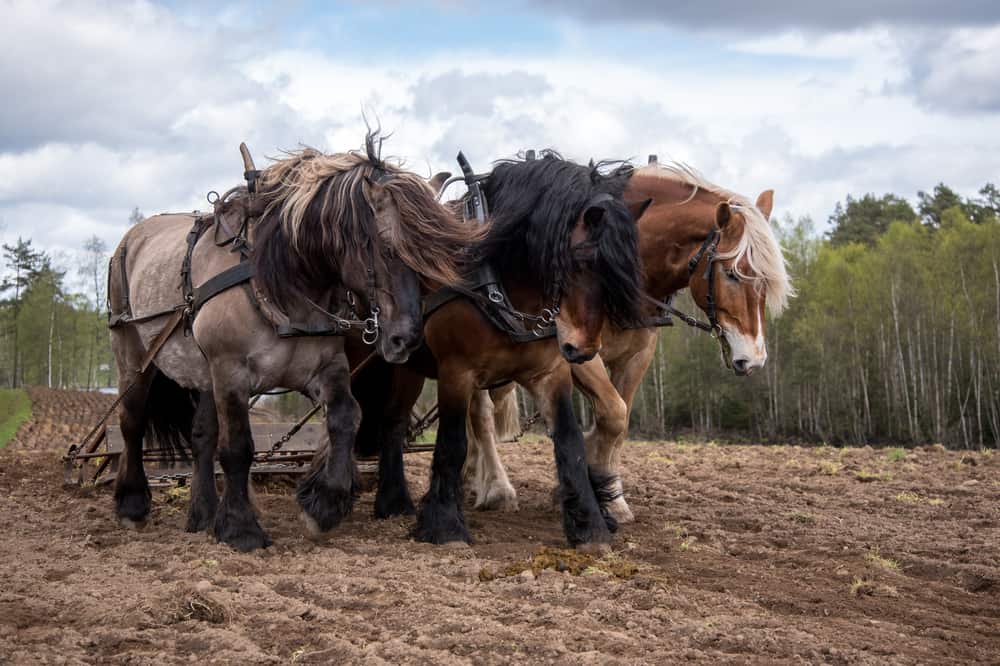 Now that you know what a draft horse is, let’s address the question you have been eagerly waiting to find an answer to – how much can a draft horse pull?

On average, a draft horse can pull a load as heavy as 8,000 pounds. But given that there are different types of draft horses, all with different weights and heights, it would be wrong to assume that all drafts will pull the same amount of weight.

As such, we have prepared this table that shows the five most common types of draft horses and the total amount of weight each one can pull. Check it out!

For an extremely heavy load, it would be best to have two horses. Let’s assume a single horse can pull up to 8, 000 lbs. If you have two of them, you will be able to transport up to 16, 000 lbs. of weight.

It is important to note that when you pair horses, you actually improve their load capacity and they are able to work more together. As such, two horses with the ability to haul 16, 000 lbs. can actually be able to pull up to 20, 000 lbs. of weight.

Factors Determining How Much Weight a Draft Horse Can Pull 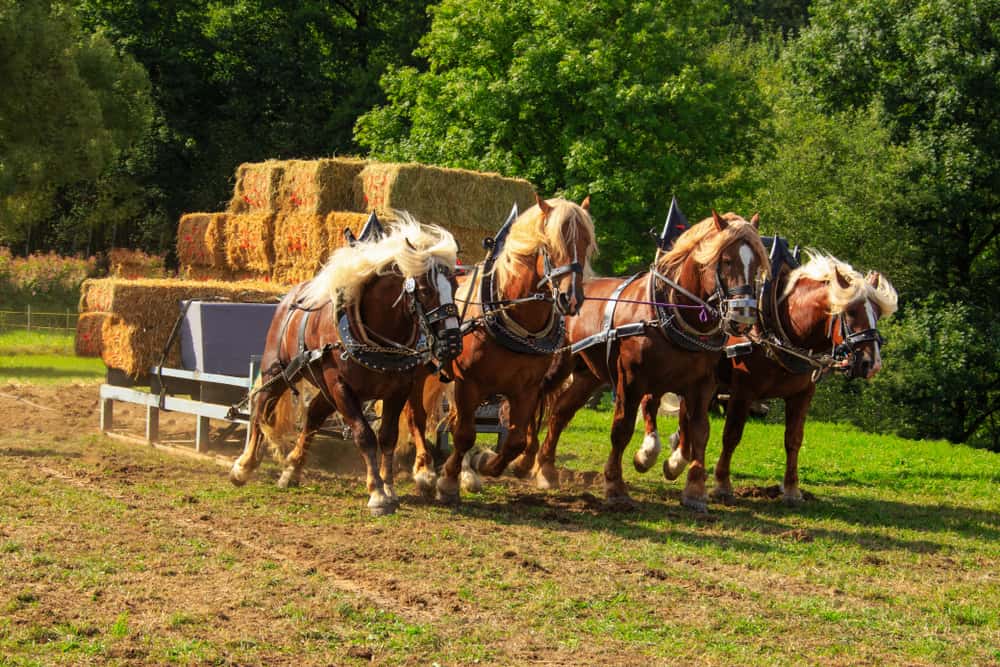 When it comes to pulling a load, there are several things that play a role in influencing how much weight a horse can handle. Here are the most common:

The amount of weight pulled by a horse in both instances will be different. Let’s first consider a horse pulling dead weight. Such a horse working for eight hours will typically be able to haul about 10% of its body weight.  And for the animal to effectively work under these conditions, it will need to take regular breaks, consuming lots of hay and water.

Horses will typically need to work harder when pulling a load ten to fifteen times their bodyweight. Check out this video of two draft horses pulling 12, 000 lbs.

Looking at the posture of the horses, you can tell that the animals are clearly exhausted and almost being maxed out because they have been pushed to their limits. This is how much a draft horse has to work when pulling a dead weight.

Things are different, however, when pulling a load on wheels. When the load is placed on a cart or wagon, the animal is able to pull it a lot easier because there is less friction between the wheels and the surface underneath.

In other words, when pulling dead weight, a draft horse will pull much less weight than when pulling a wagon. It will also be slower.

For shorter distances, a draft horse can pull up to five times its weight. But you don’t want your horse pulling that much weight over a long distance. If you are traveling a long distance, it would be best to give the horse a load that doesn’t exceed its weight; even though the horse is pulling a wheeled load.

The type of ground the horse is riding on will also affect how much weight the animal can pull. Over a road, arena, or other smooth surfaces, your draft can be able to haul up to four times its body weight, pulling a cart or wagon.

When it comes to hills, rocky surfaces, or other uneven terrains, however, the horse may have trouble pulling a load even equal to its own weight.

Just like skilled athletes wear special shoes to improve their performance, horses do wear shoes as well. Make sure to get your horse shoes that have slip protection; they will provide the grip needed when pulling large, heavy loads.

How Fast Can a Draft Horse Pull a Wheeled Load? 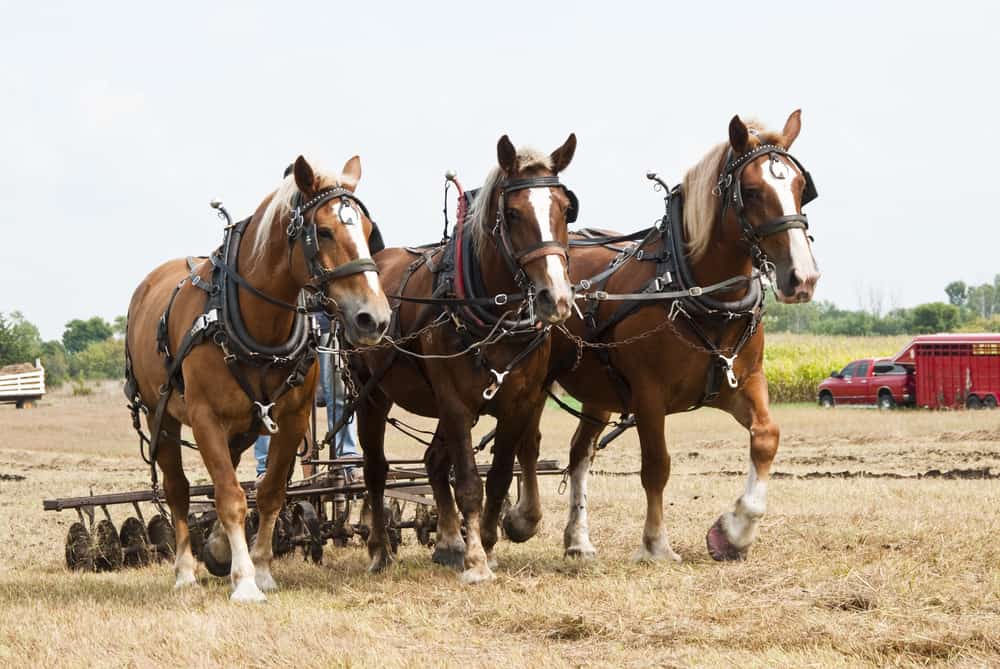 It will depend on how much the load weighs, how long the trip is, how smooth or rough the surface on which the wheels are moving is, and how old and healthy the animal is.

Let’s consider a horse pulling a lightweight cart of about its own weight on a surface with gravel. In this case, the horse may even be able to run at a speed of up to twenty-two mph. However, it won’t hold up this speed for too long.

If you are riding over a long distance of about one hour or so, the reasonable high speed of the horse will be about fourteen mph.

But for the most part, a draft horse will work best at a speed of about five mph, and this pace will depend a lot on the breed of the horse and the weight of the load.

If the cart is too heavy, avoid pushing the animal to walk or run too fast. Also, make sure the horse is taking breaks to feed and drink water.

The animal should get enough rest after work too. If your horse has been pulling a heavy load for, say eight hours,  you should let it rest for several days before the next task. This will help keep the animal’s legs and heart healthy so they don’t get overworked.

Draft horses are typically strong animals and can pull loads of weight for long hours before getting exhausted. To help the animal stay productive, make sure it takes short breaks to feed and drink throughout the journey. It is also important to regularly exercise the horse so it can stay physically fit and be able to undertake heavy tasks more easily.