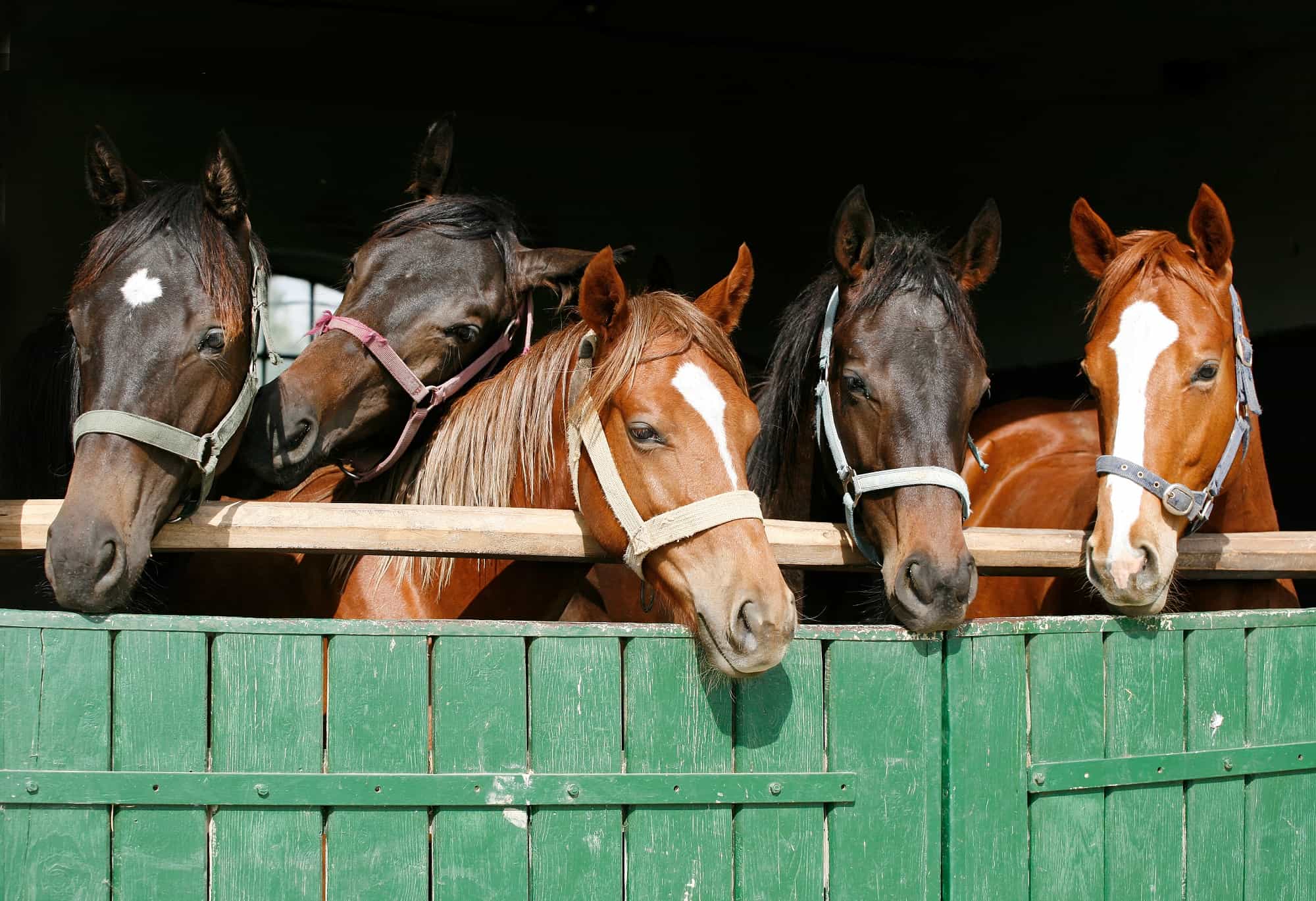 It can be pretty confusing finding so many terms for horse description, but each of them will precisely show you how old the horse is and whether it is male or female. One of these phrases is a gelding horse, but many people are unfamiliar with it.

Horses have a low survival rate if you compare them to other mammals because of their size, high hormonal levels, and sensitivity. Therefore, neutering has a crucial role in their well-being, especially if you have a male horse with average or poor genetic potential. Let’s find out what is a gelding horse.

When you decide to buy a horse, it is desirable to find out more about it and choose the right one for yourself.

This phrase is neutral when talking about horse gender. A newborn horse baby is the suckling at the beginning of its life. As soon as it has weaned from its mother, both female and male baby horses become a foal.

Once they turn one year old, they become one-year-olds (yearlings). At the age of two years and older, you will use specific gender expressions for different horses.

Yearling is a young horse from the age of one until it reaches the age of two. Every horse that age is a yearling, regardless of whether it is:

Yearlings undergo significant growth and development between the first and second birthdays. However, they are still too young to breed and ride.

Although filly can be sexually mature at 18 months, it is rare for people to use such a young horse for this purpose. The best option is to wait for the filly to turn four years old to start breeding, although some do it as soon as the animal turns three.

A mare is a female horse that is over four years old. Almost no one neuters them because of the complicated surgical procedure, so there is no term to describe spayed females.

Mares are usually easier to handle than stallions, but many agree that some mares can be moody. However, each mare is different, and most of them are acceptably calm in this period.

Broodmares are mares used for breeding, and they are mostly 4 to 16 years old. However, some mares can be bred at an older age, as well. Since the average pregnancy in horses is 11 months, a fertile mare usually gives birth to one foal a year.

At a younger age, broodmares may participate in the races. Their results are taken into account when assessing their offspring quality.

Colt is a young uncastrated male horse, up to four years old. Many breeders wait for colts to reach at least three years before using them for breeding. However, these young horses sometimes start the reproduction period as early as 12 to 14 months.

In case the colts are used for racing, they mainly compete on flat terrain. Only the best will go to the breeding process after a successful racing career.

The only difference is that the pony is smaller. Keep in mind that all the terminology used for horses has the same meaning and application for their smaller cousins.

A stallion is a not-castrated male horse older than four years kept for breeding. Due to the high testosterone levels, they have a more muscular build and a more beautiful neck. A stallion can end its racing career early to continue the hereditary line of runners with a top performance by breeding.

Stallions are almost always difficult to handle. Due to their aggressive behavior, they can pose a danger to other horses if they are not appropriately handled.

Because these horses have strong breeding instincts, they almost always fight for dominance in the herd against other stallions and castrates. This behavior can include biting, rearing, kicking, and striking out with their front legs.

Keep in mind that such horses in full force usually weigh thousand kilograms or more, making it almost impossible to control them safely. Luckily, they are rarely aggressive toward people.

The gelding is a neutered stallion of any age. Castration is a reasonably simple procedure in stallions, in contrast to the complicated mare sterilization. If you don’t plan to use a horse for breeding, it is the best possible option.

Vets recommend that the best period for a male horse to be castrated is at the age of three months to one year. Once they turn one year old, the testosterone levels become too high and affect horses’ behavior.

Once you neuter a male horse, its temperament becomes even, so it becomes easier to handle, ride, and train. If a horse is castrated later in life, it can retain the aggressive behavior of stallions. 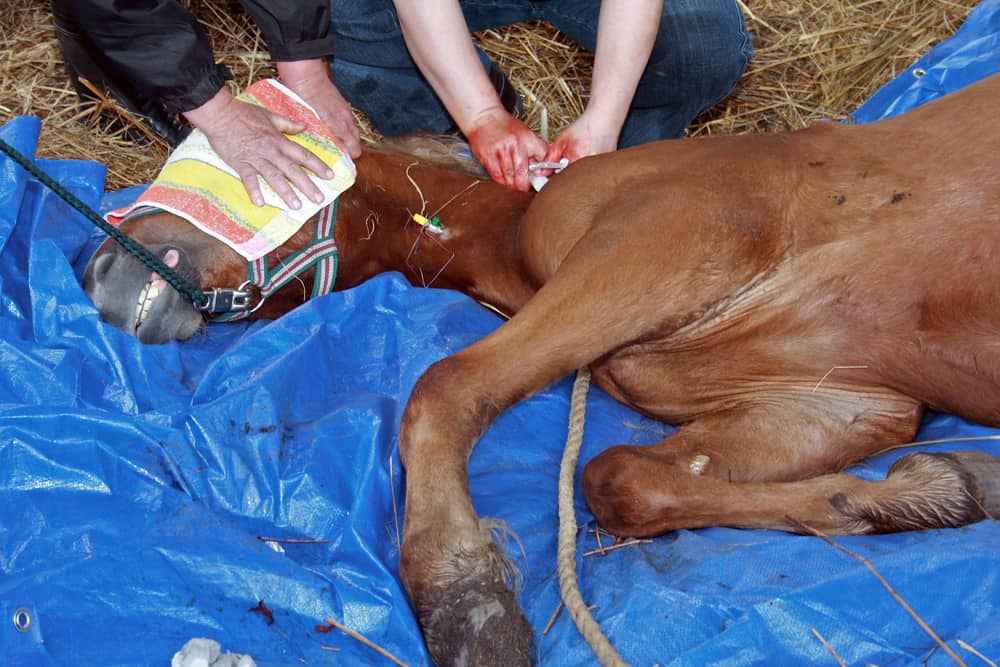 Castration is a surgical procedure of removing male horses’ testicles. You should always call a vet to perform this procedure to prevent possible complications.

It is usually performed on colts to make them easier to train and manage. Keep in mind that breeders castrate only horses with a minimum breeding value.

This procedure is not the best option for horses when their breeding potential is promising. In such a case, it is better to delay neutering until confirming that capacity. You can proceed if it turns out that the existing potential is not satisfactory enough.

The procedure is also desirable when you plan to reduce the existing number of horses or prevent unwanted traits inheritance. You should castrate colts with bad traits as a responsible owner.

The optimal age for neutering

Most owners think it is better to castrate the colt early to prevent developing lousy, aggressive, and dominant stallion behavior. However, it is necessary to wait for the testicles to descend into the scrotum, which usually happens before the colt is one year old.

The testicles produce testosterone that controls physical characteristics, such as the ridge of the neck and stronger chest muscles.

Since testosterone causes aggressive behavior, such a colt can endanger other stallions or castrates, as well as for anyone who handles a horse. On the other hand, gelded horses are calmer and usually uninterested in mares.

Geldings are usually slightly taller than stallions with the same characteristics. They are desirable for riding, especially for inexperienced riders or those that prefer avoiding mares. Unfortunately, female horses are often weird during the heat cycle.

Apart from being quieter, safer, and behaving better when riding, these horses are a much safer choice for beginners than temperamental stallions for many reasons. Plus, gelding horses ensure that only the best animals are chosen for breeding.

Many breeders keep colts separate because they can show bad behavior towards other horses. If you miss neutering your colt on time, it can become increasingly aggressive and dangerous to other horses as it gets older.

Therefore, it is harder to train it. According to some reports, up to 65% of uncastrated horses will develop unwanted behavior over time.

Developing heavy muscling in a colt is an undesired trait when you plan to use it for racing. The too thick neck is a reason for a weightier front body part, which significantly slows the animal.

Early gelded horses will be taller and more proportioned, making them highly desirable for racing.

In a case when one (unilateral) or both (bilateral) testicles fail to drop into the scrotum, a horse may develop issues with walking and running. Such a condition is well-known as cryptorchidism.

These horses (ridglings, rigs, high flankers) require emergency surgery. Testicles stuck in inguinal canals reduce fertility or cause complete sterility since the inside higher temperature prevents them from producing sperm.

On the other hand, testicles continue to produce testosterone and negatively affect bad behavior.

Another severe problem is injury. Colts won’t tolerate staying calm in a stall to recover and may cause further injuries. In such a case, neutering is a way to let it time to recover calmly. 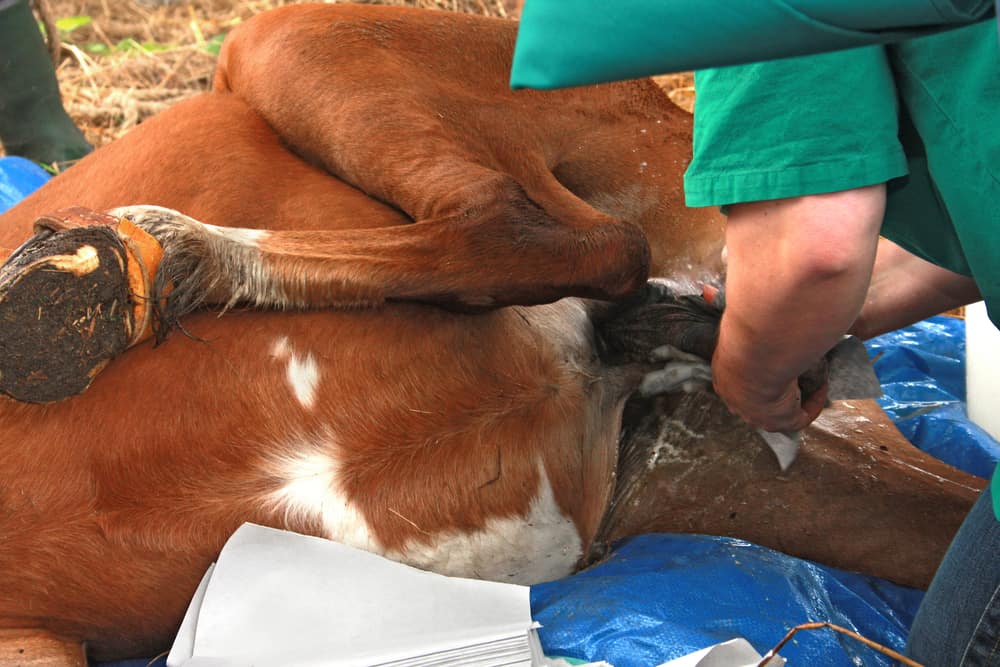 The crucial thing is to geld horses at the appropriate age. It can be as early as three months. since younger horses need less time to recover.

On the other hand, premature neutering when testicles are not entirely formed may lead to complications. If you wait for so long, your horse will probably keep stud-like behavior.

The first step in horse castration is sedation given by intravenous injection into the jugular vein. The initial amount of sedative is based on body weight and horse temperament.

In just a few minutes, the animal will look quiet and relaxed. At this point, the vet needs to check the horse’s testicles to make sure that both are down.

Local anesthesia usually lasts 15 to 30 minutes. During that time, the vet needs to work quickly and efficiently on preparing the surgical site, completing castration, and cleansing before the anesthetic stops working.

The procedure for both surgical methods, standing and lying neutering, is almost the same. After disinfecting the surgical site, the vet will make two incisions in the scrotum, one over each testicle.

Then, it is time for removing the testicles with an emasculator followed by compression to prevent bleeding.

In the case of an adult horse, the vet is likely to place ligatures of resorbable material around the canal to prevent further bleeding. There is no need to remove these ligatures later.

After removing the testicles, there is no need to close the incision, plus it is not recommended. This procedure allows the surgical wound to heal slowly over a week or two. In this way, the possibility of excessive, painful swelling is reduced.

It is necessary to carefully monitor the horse’s behavior and the incision appearance a few weeks after castration. In the summer months, strict control of flies is needed to prevent infection at the cut site. Flies are a reason why most vets tend to avoid hot summer days for such a procedure.

Over the next two weeks, the horse needs light exercise to improve drainage and reduce swelling. The testosterone level will decrease within two days after surgery. Usually, the horse needs four weeks to return to regular work or training.

Sometimes, your vet will recommend anti-inflammatory drugs for pain and tetanus booster. Broad-spectrum antibiotics are necessary only in the case of:

In such a situation, you should consult your vet right away.

Spaying is a term used for sterilizing a mare. While male horse neutering is a routine procedure, spaying of mares is often complicated and hazardous, requiring an experienced and skillful vet.

For instance, light anesthesia is enough for male horses neutering. The animal can start moving within a few minutes or one hour after the procedure.

On the other hand, spaying is a real surgery procedure performed in a veterinary clinic. Mare needs to be in deep anesthesia since the vet removes its ovaries. Since the surgery is highly invasive, the recovery time is much longer.

Female horses’ spaying is usually performed only when the mare has life-threatening reproductive health problems. Spaying is also recommended when the mare’s hormonal cycle makes it difficult to ride or affects its behavior.

As a responsible horse owner, you should consider neutering your colt. That way, you will solve the problems of unwanted horses and prevent bad behavior, particularly aggression.